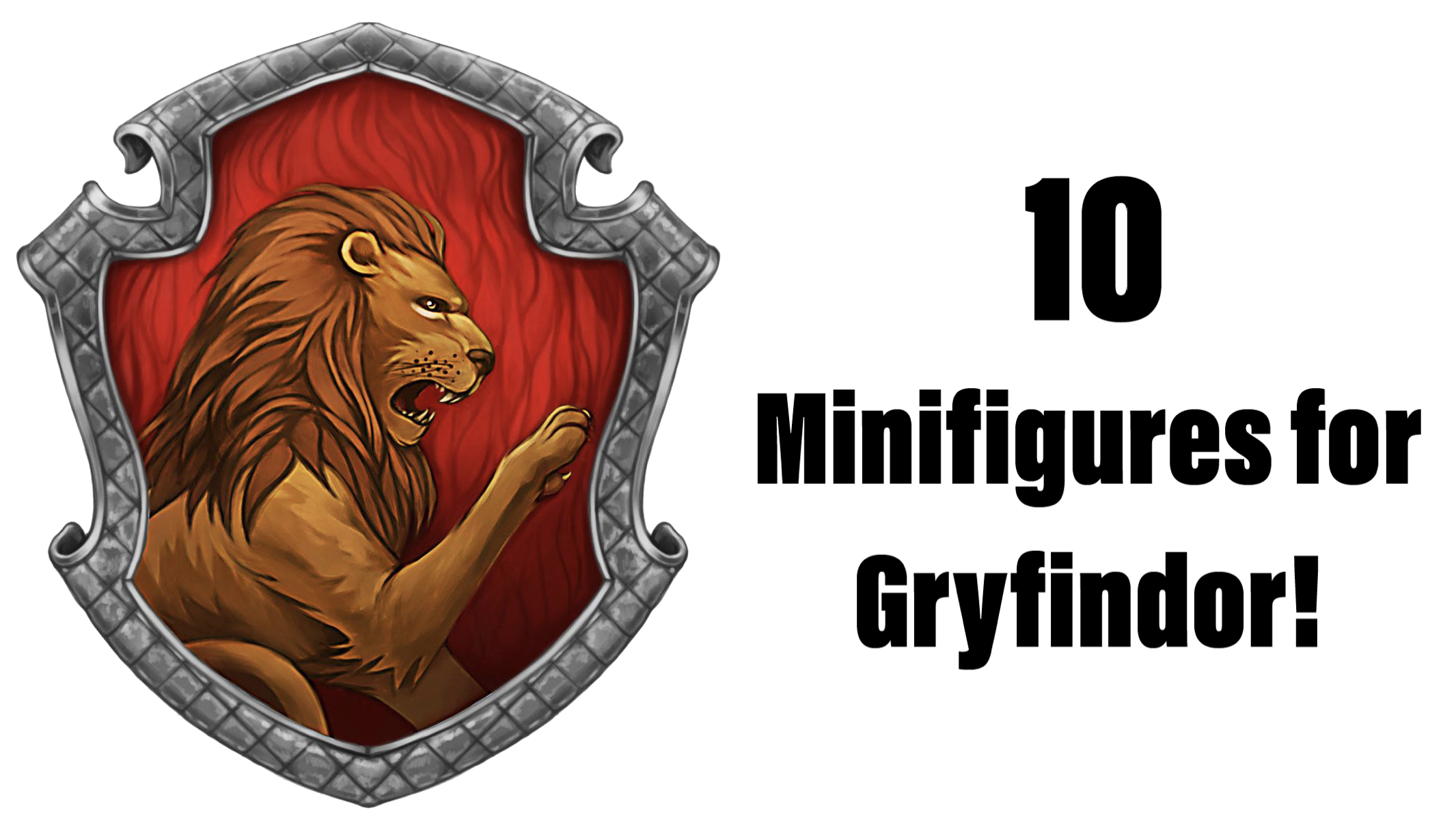 When LEGO revived the Harry Potter theme in 2018, one thing was notably absent from the new waves of sets: Students! Considering Hogwarts is a school, there are surprisingly few student minifigures besides Harry, Ron and Hermione. Several named students have never been depicted in school uniform. LEGO has neglected some students entirely, choosing not to depict characters like Vincent Crabbe, Colin Creevey or Justin Finch Fletchley. This is the first entry in a series of articles on LEGO Hogwarts students minifigures. These articles will explore each Hogwarts house in turn, identifying the characters worthy of minifigure representation. It will suggest LEGO minifigure parts so fans can recreate these characters for themselves. If you want to acquire any of the LEGO pieces that are featured, click on the hyperlinks embedded within the article. I chose to begin the series by re-creating the minifigures of 10 students from Gryffindor house. This article will follow some of the more well-known characters but a follow up article will examine 10 more obscure Gryffindor students.

Hogwarts School had a strict uniform code. Students were expected to wear white shirts and ties. FireStar Toys custom minifigure team has made the perfect part for this. They even included an appropriate red and gold tie print to represent Gryffindor house. Hogwarts students are more commonly seen with a grey v-neck jumper over their shirts. LEGO produced the perfect torso piece for this. This part was originally in the expensive Hogwarts Castle sets but will soon be made available in cheaper a Harry Potter minifigure pack.

As well as shirts and jumpers, Hogwarts students wore black wizard robes. LEGO produced a variety of robed torso pieces in the first Harry Potter minifigure series. Hermione came with a fastened robe piece. Harry’s print was untied, revealing more of his jumper. Ron’s robe was also undone. However, this torso piece differed from Harry’s as it revealed a white shirt rather than a jumper (Ron is notable unkempt with his tie print being particularly messy). The Dean Thomas minifigure also included a robed Hogwarts uniform torso. His torso featured a dashing Gryffindor scarf.

LEGO has produced a series of leg parts appropriate for Gryffindor minifigures. First and second year students have been depicted with black short leg pieces. Third and fourth year students use a mid-leg piece that was introduced in the Harry Potter minifigure series. Some mid-leg pieces include corresponding leg printing. When purchasing mid-leg pieces make sure you acquire parts with leg prints that correspond to the appropriate robed torso pieces. Use the guide below to ensure you acquire the correct parts. Older students use full sized minifigure legs, normally in black. 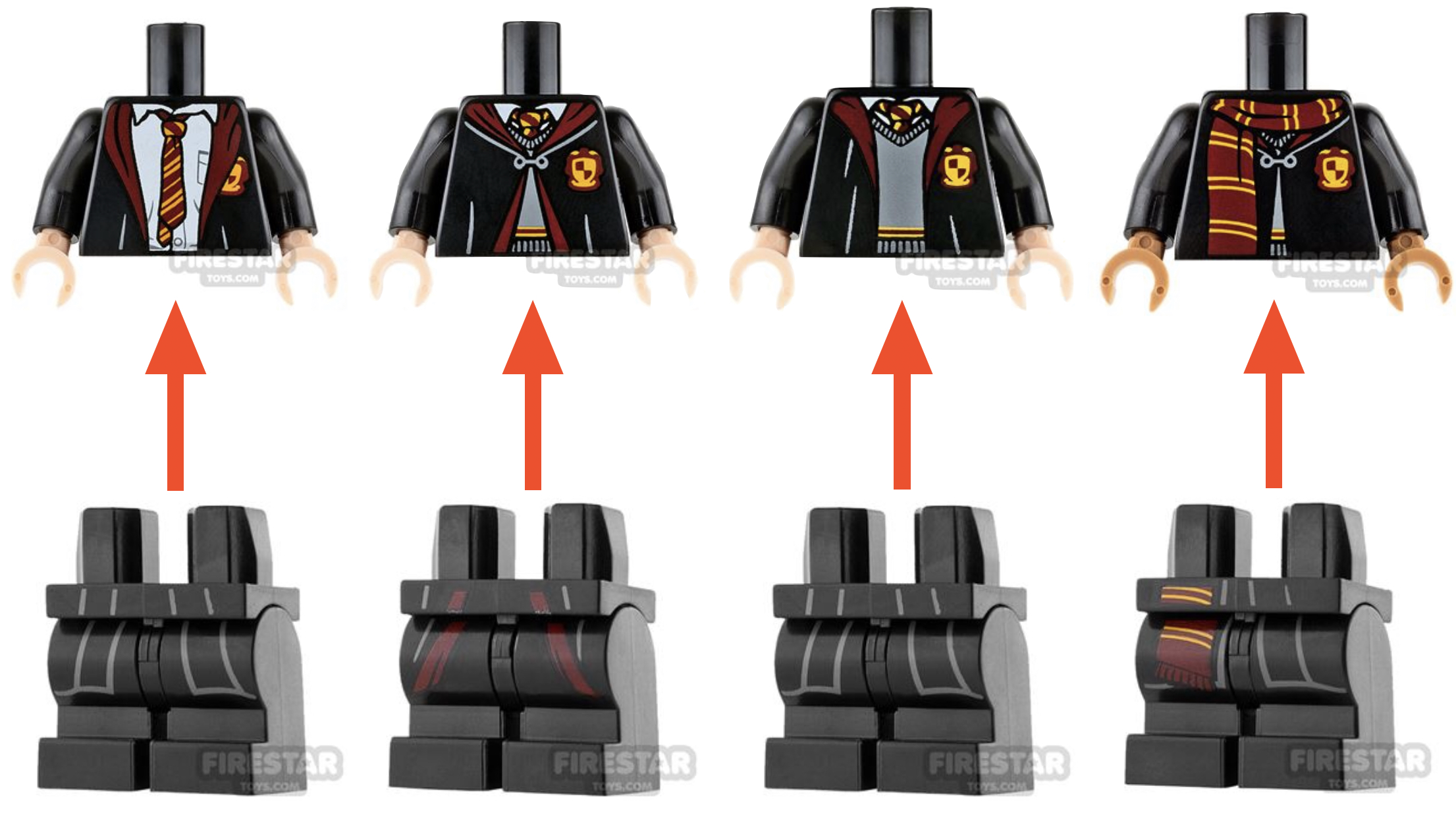 One problem with LEGO’s Hogwarts torsos are the hands. Most of the pieces use a pale flesh tone. This works well if you are using the torsos to represent white skinned characters but is problematic for fans trying to recreate characters such as Parvati Patil, Bem or Romilda Vane. Fortunately, this problem can be easily resolved. If you are trying to accurately represent different ethnicity you can purchase hand pieces in a whole host of different colours.

Before recreating characters, it is worth establishing that not all the characters in this article are in the same year as Harry Potter. For example, Colin Creveey began attending Hogwarts when Harry was in his second year. Other characters such as Oliver Wood are older and left Hogwarts before Harry completed his education. Fans who wish to be incredibly accurate need to bear the characters’ ages in mind when choosing minifigure legs. If you wish to recreate an entirely accurate collection of Gryffindor minifigures, it would be beneficial to decide which year you want Harry to be in before you start purchasing parts.

Having established all the foundations for building a Hogwarts Student collection, let’s begin examining Gryffindor characters. 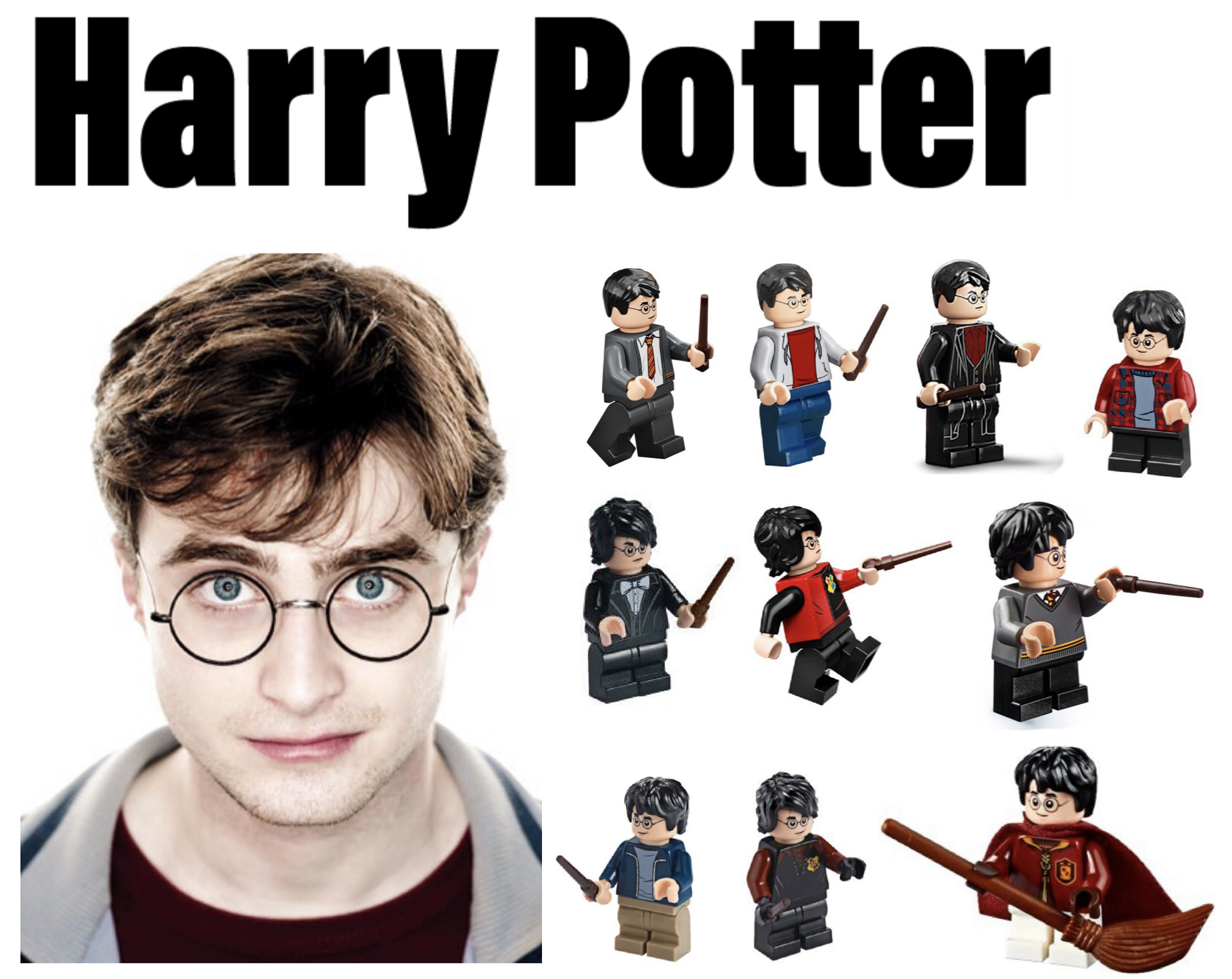 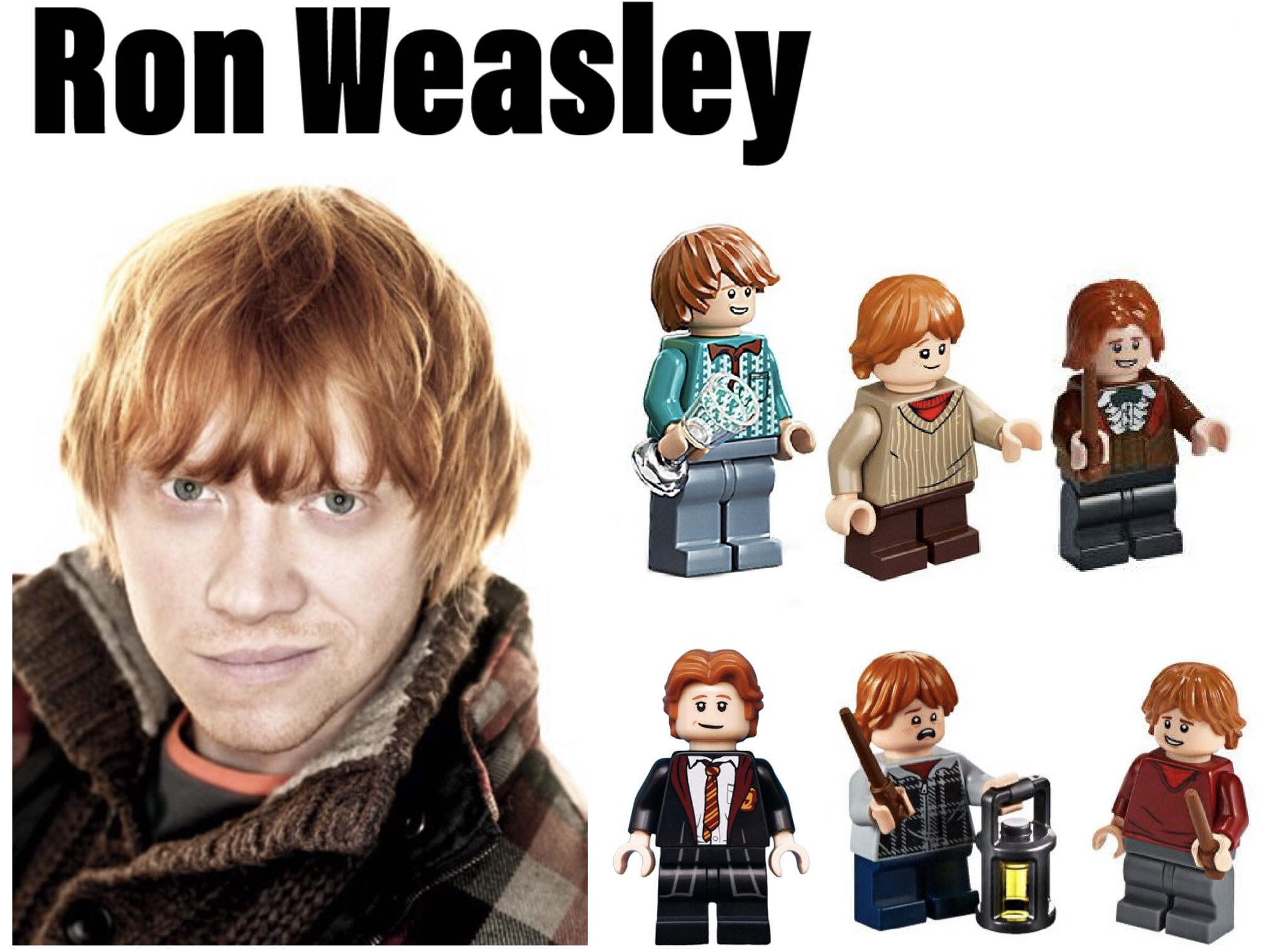 Ron Weasley is also in a lot of the more recent Harry Potter sets. I love the Ron minifigure that came with the Hogwarts Clock tower. The LEGO designers did an incredible job at recreating Ron’s outdated dress robes. It is probably one of my all-time favourite minifigures. FireStar Toys sells most of the recent Ron minifigures if you want to add the character to your collection. 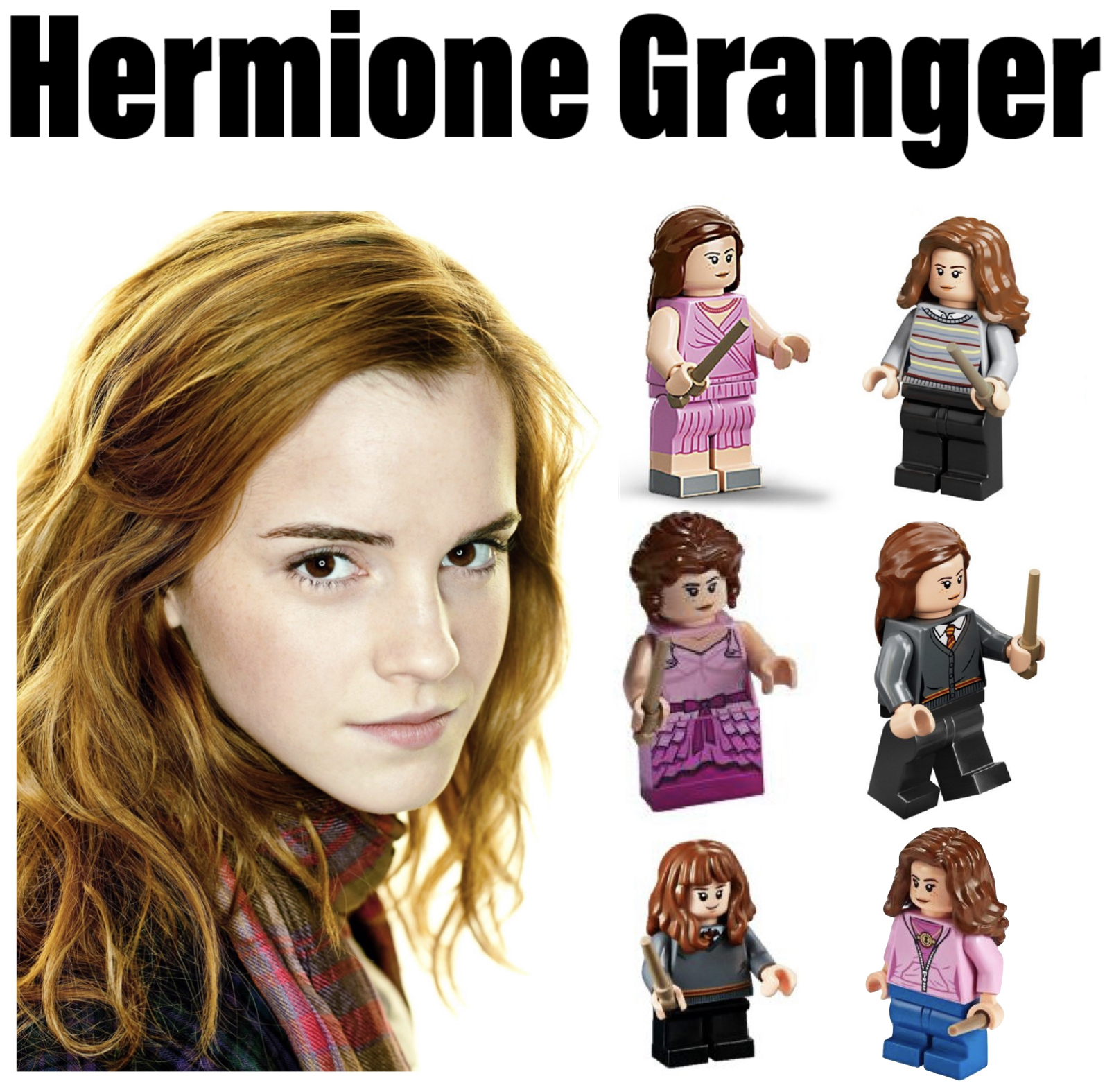 Hermione Granger has a lot of minifigures. It is somewhat disappointing that LEGO has yet to recreate cat Hermione in LEGO. Hopefully this will be rectified (perhaps in a future Harry Potter minifigure series). If you wanted to acquire the brightest witch at Hogwarts, you’re in luck. FireStar Toys sells all sorts of Hermione minifigures if she is a character that you want to add to your collection. 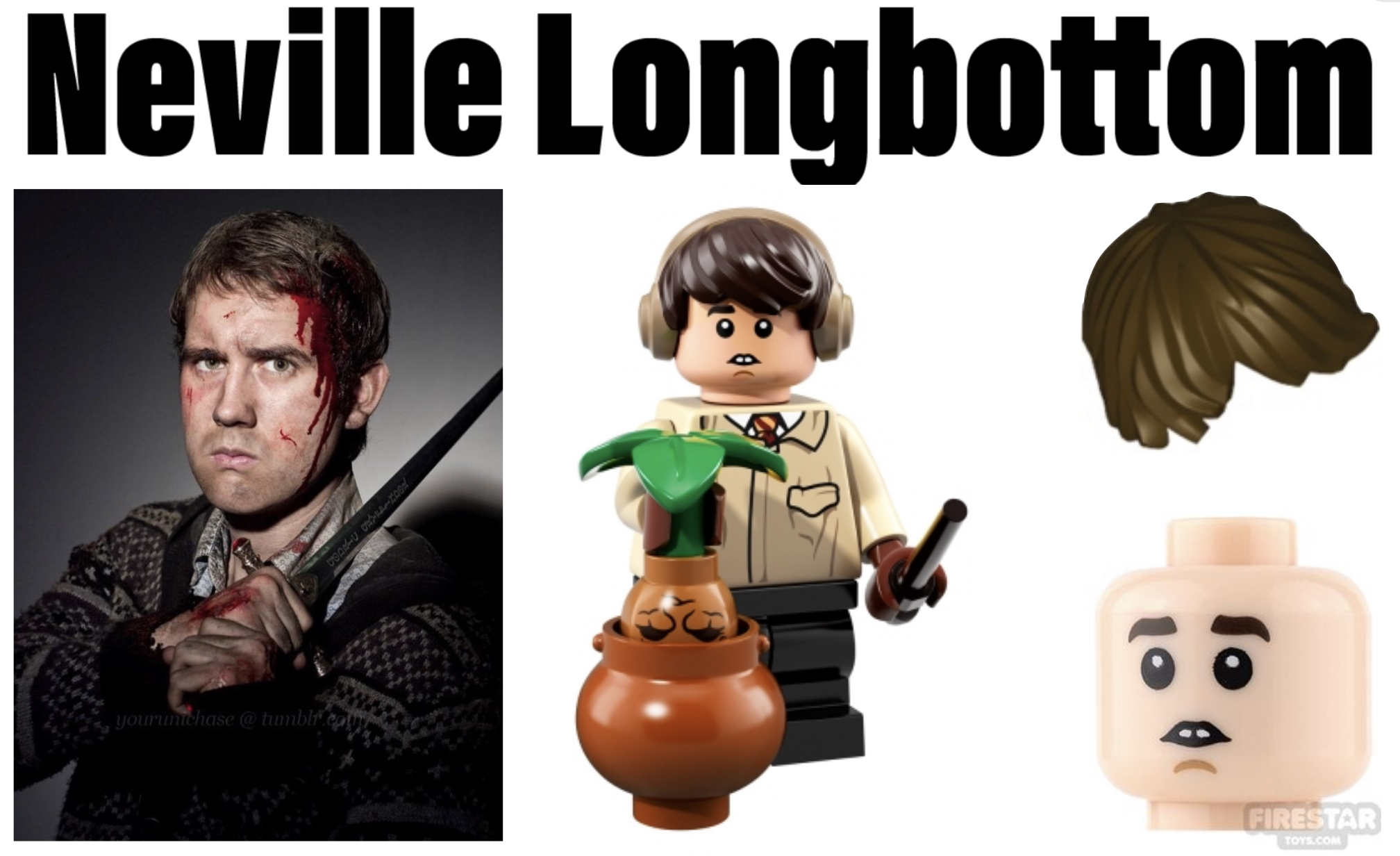 Neville Longbottom has only been recreated twice since the Harry Potter theme was rebooted in 2018. He was included in the first Harry Potter minifigure series. His minifigure wore a Herbology uniform and the obligatory earmuffs to avoid being knocked out by the cry of growing mandrakes. Neville was also included in the Hogwarts Astronomy Tower set.  Neville is wearing a waiter’s uniform to represent his appearance at Slughorn’s Christmas party. If you want to create Neville in his school uniform use brown wavy hair and the worried face.

Dean Thomas is another Gryffindor student. He shared a dormitory with Harry, Ron, Neville and Seamus. He was included in the Harry Potter minifigure series. If you want this character in LEGO you could purchase the whole figure or try and make a new version using the dark brown afro piece and one of the many heads available from FireStar Toys. 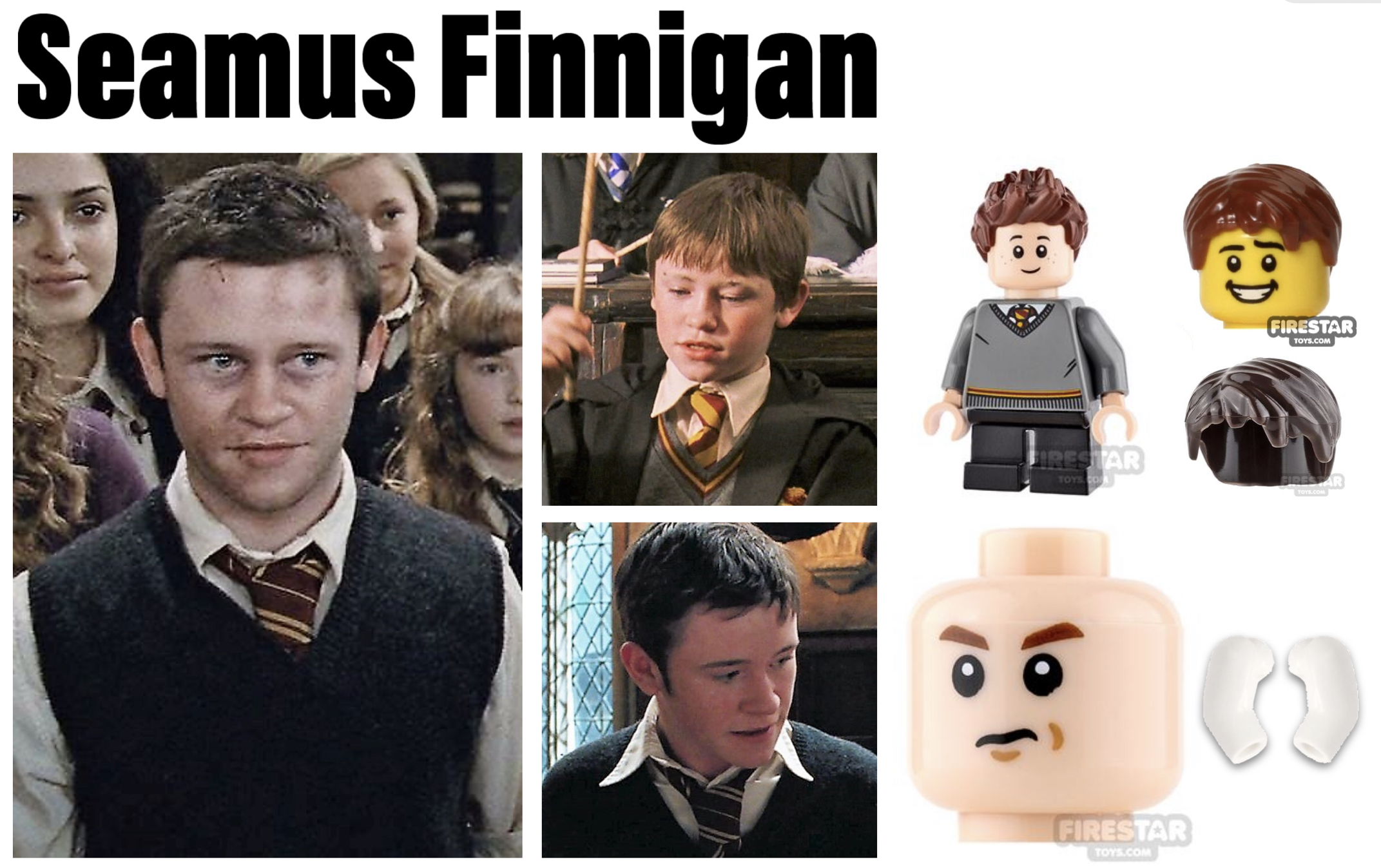 Seamus Finnigan also shared a dormitory with Harry, Ron, Neville and Dean.  A LEGO Seamus minifigure was included in the Whomping Willow set. This minifigure somewhat accurately depicts his appearance in the first two Harry Potter films. It uses spiked brown hair on top of a smiling child’s face. If you want a minifigure to represent an older Seamus I recommend tousled dark brown or reddish brown hair and a frown face with cheek dimples.  You could also consider a pair of white arms for when Seamus wears a sleeveless jumper. 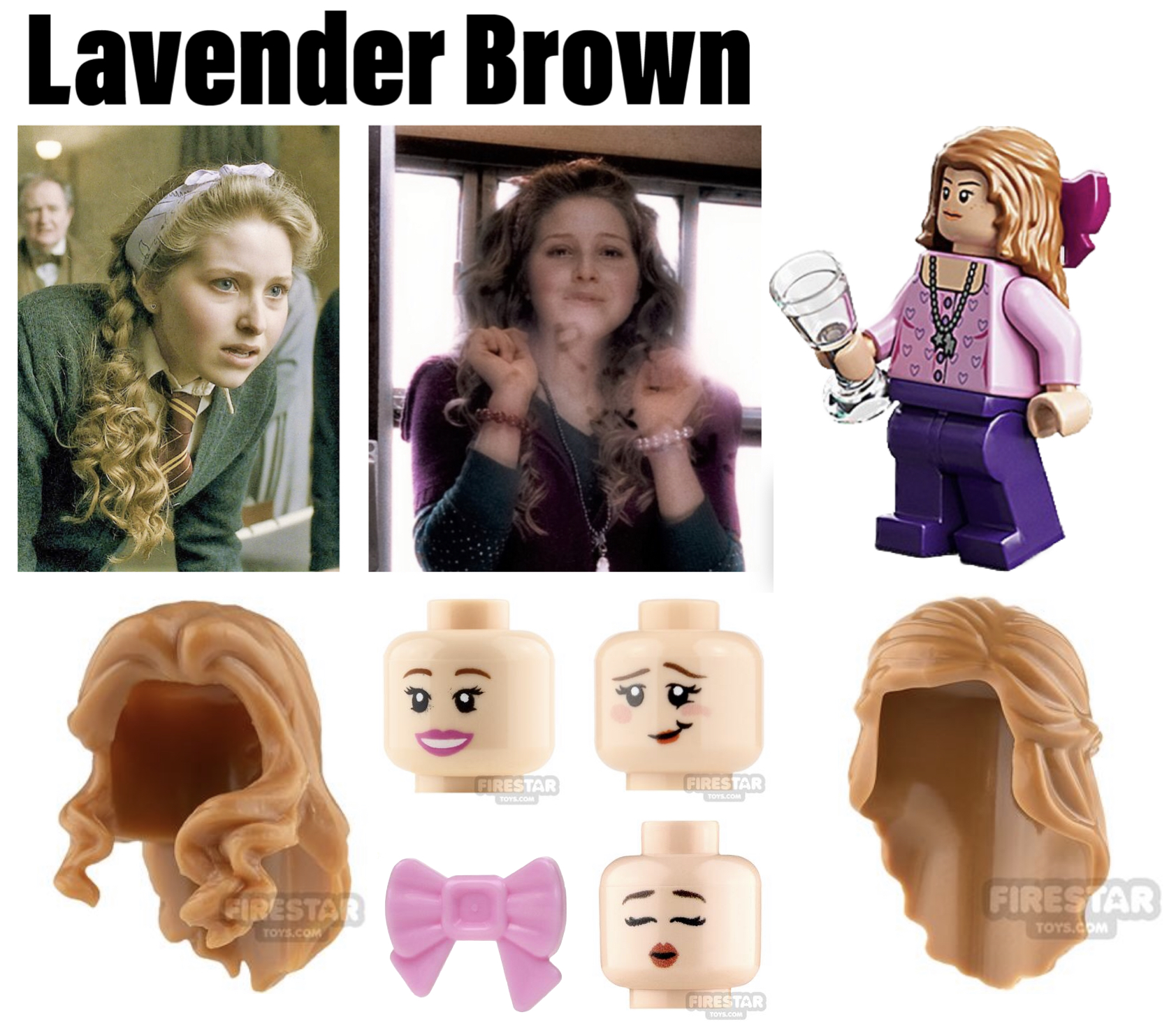 Lavender Brown was a girl in Harry’s year. She dated Ron in the Half Blood Prince. LEGO made a Lavender Brown minifigure in the Hogwarts Astronomy Tower set. This minifigure accurately depicts Lavender’s appearance at a Gryffindor Quidditch celebration party. If you want Lavender in school uniform, I recommend changing the hair piece. I’d personally use a mid length twisted bangs hair piece although you could use long braid piece if you think LEGO’s hair choice was fairly accurate. Fans might consider purchasing a custom printed minifigure head to depict Lavender kissing or in love. Or you could purchase a generic pink lipped minifigure face. You could also consider purchasing a bow for her hair (just bear in mind some hair pieces don’t have holes to connect bow pieces to). 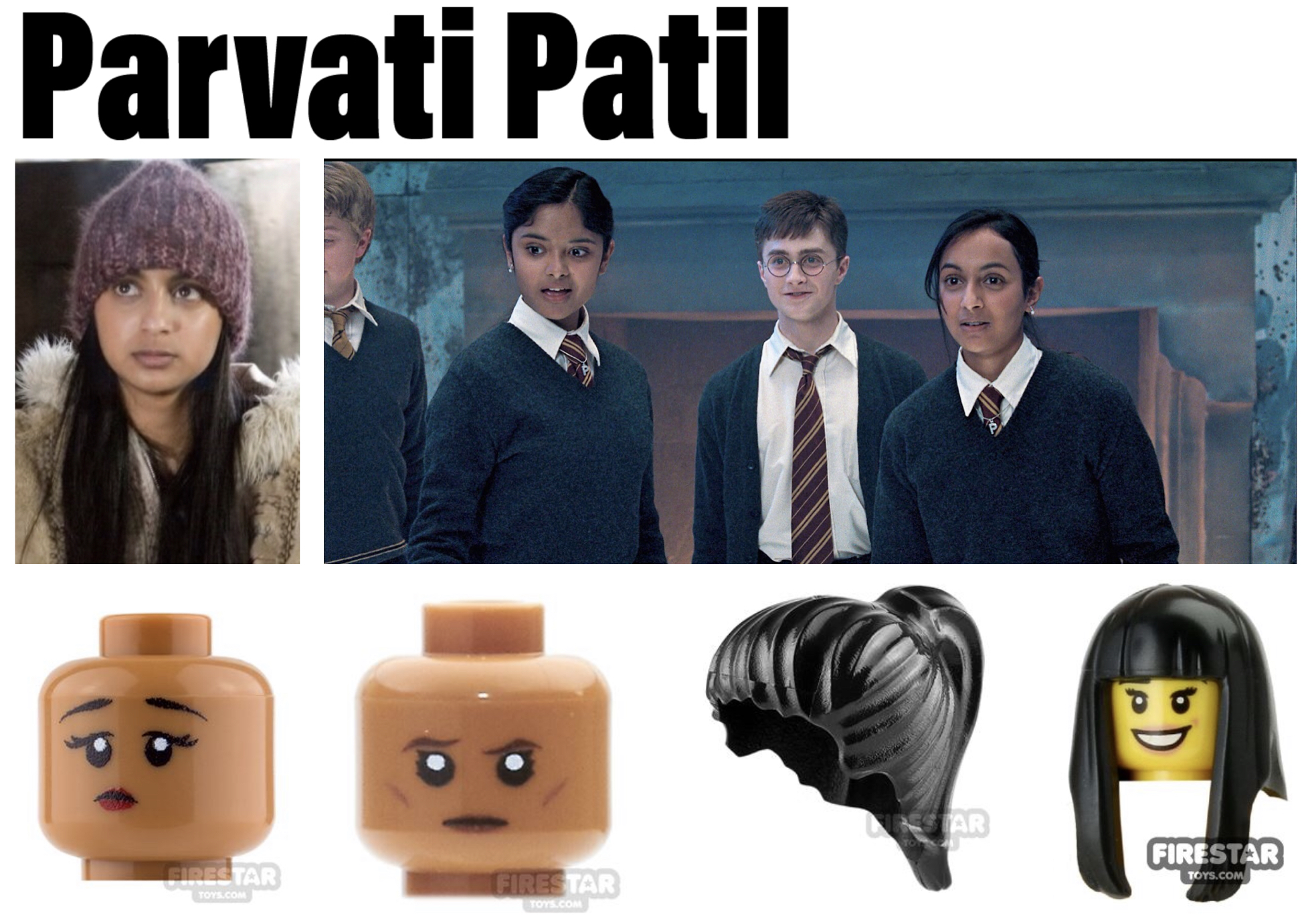 Parvati Patil was a Gryffindor student in Harry’s year. She was Harry’s dance partner at the Yule ball. Parvati had a twin sister in Hufflepuff called Padma. Recreating Parvati in minifigure form is relatively simple. I recommend the FireStar toys perplexed face as it accurately captures her disgruntled appearance at the Yule ball. Alternatively, you could use a stern face but this face print may be more appropriate for Slytherin characters such as Pansy Parkinson. In Hogsmeade Parvati can be seen with her hair down. To recreate this look I’d use a long black fringe piece. However, most of the time Parvati can be seen with her hair in a pony tail. This look could be recreated using a black pony tail piece. 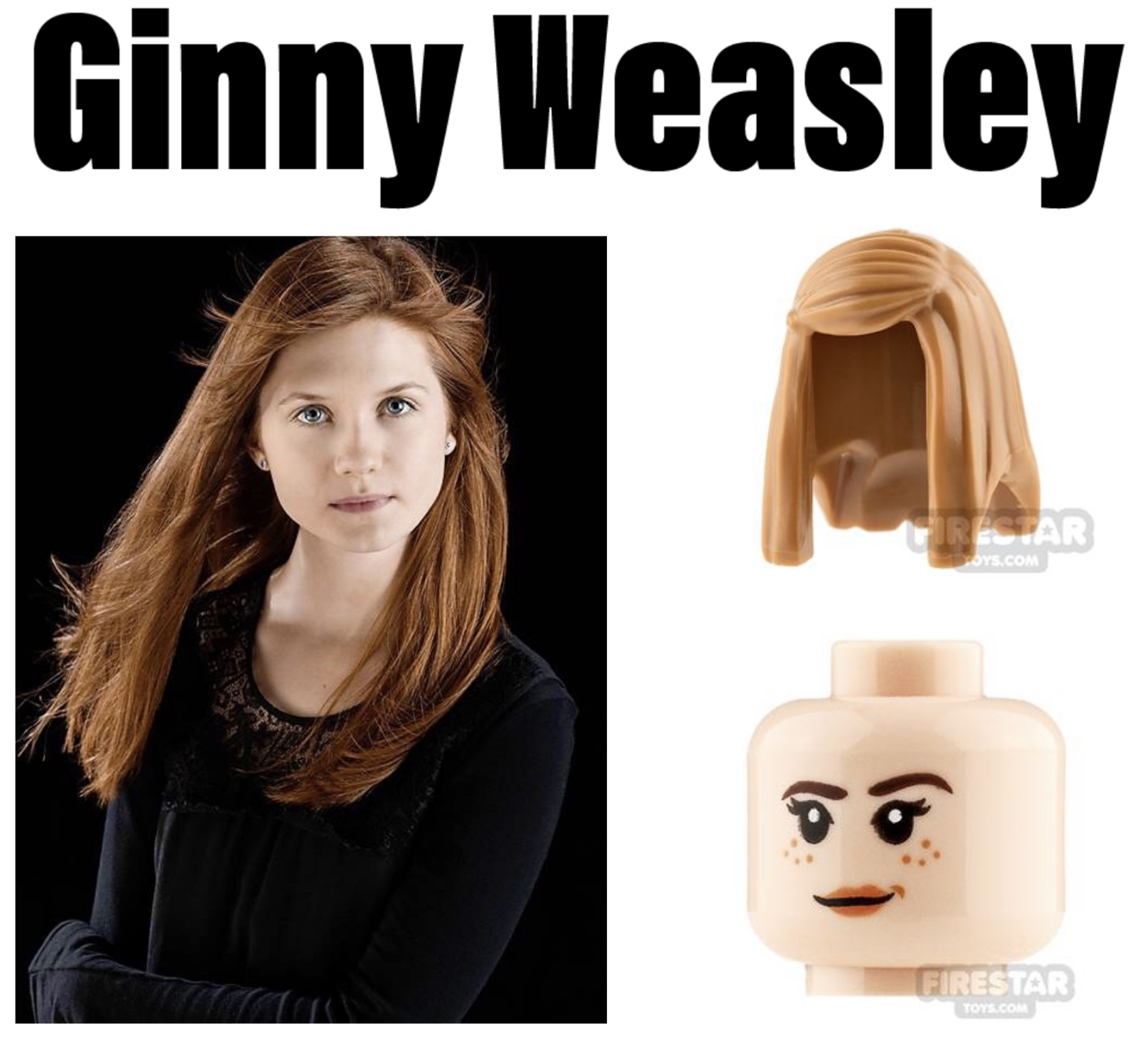 Ginny Weasley is Ron’s younger sister. She was recently included in the most recent LEGO Burrow set. She is in the year below Harry. LEGO has yet to include Ginny in her school uniform. Fear not though as this look can easily be replicated. I recommend using a freckled smile face print with long straight hair.

Colin Creevey is Harry’s devoted fan boy. He is one year below Harry and is known for carrying his camera everywhere he goes. Choosing the right parts for Colin Creevey was surprisingly easy. I recommend using a short and messy hair piece with his crooked smile face print. Normally I don’t recommend accessories but a camera is vital for Collin. FireStar Toys sells a black camera with large flash that is definitely worth considering. In one notable moment during Chamber of Secrets, Collin ducks to miss a rogue bludger. You could recreate this scene using FireStar Toys terrified face and a side fringe hair piece.

There are so many Hogwarts students that haven’t been represented in minifigure form. This list of Gryffindor minifigures hardly scratched the surface. Keep reading FireStar Toys articles to see an article on creating more obscure Gryffindor characters and articles on creating students from the other three Hogwarts houses.

Do you disagree with any of the part choices I made? What would you have done differently? Please weigh in by sharing your thoughts in the comments section. I’d love to heater your opinion on the matter.

Images were taken from Brickset and Harry Potter Wiki. I also used these sites when conducting research for the article.