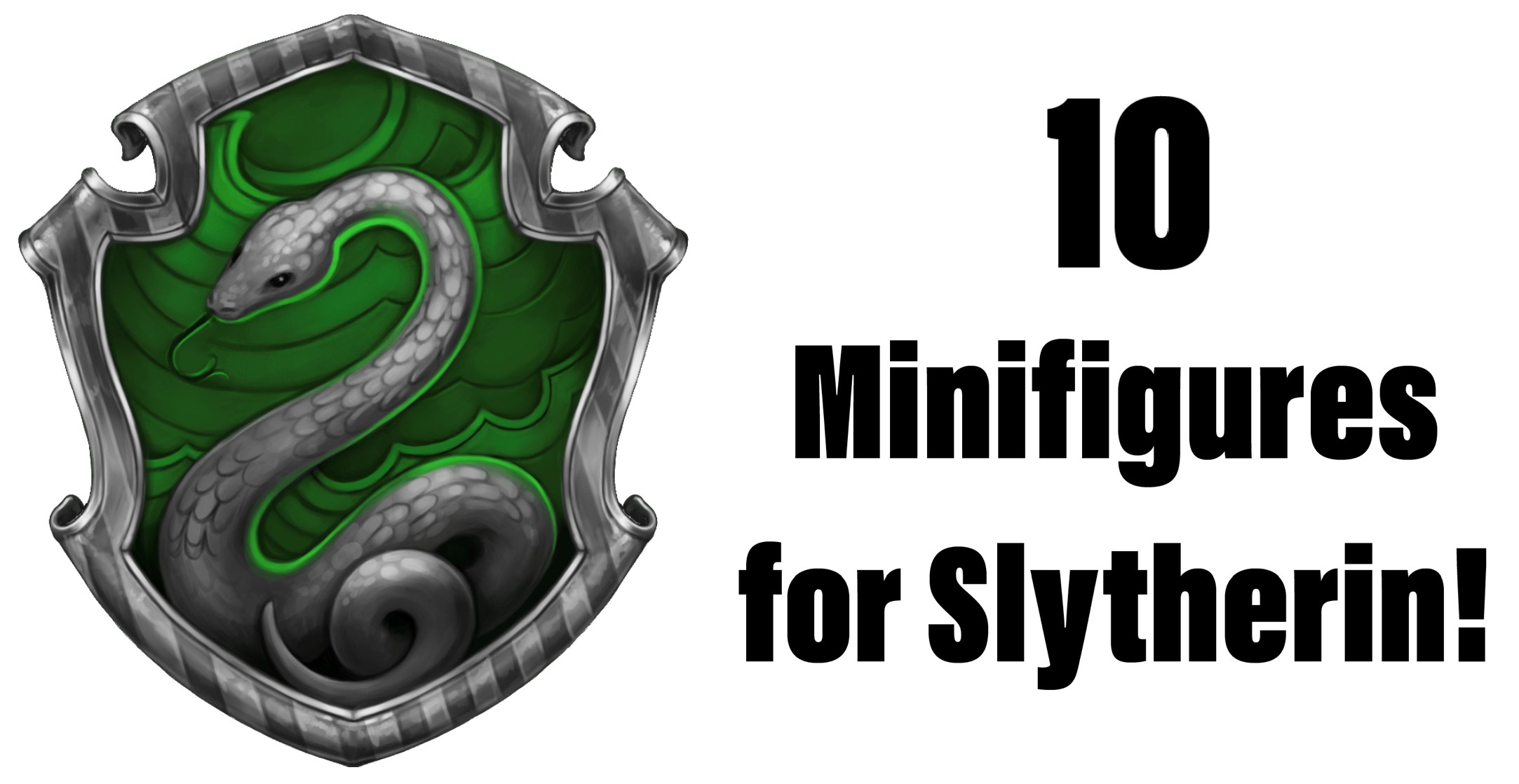 In 2020, LEGO released the Harry Potter accessory set! This opened a series of doors for LEGO Harry Potter fans. All of a sudden amassing a large number of Hogwarts students became a viable option. So which students has LEGO never created? When should you use the short leg piece and when is it appropriate to use the new medium leg piece? What head pieces best depict certain characters? This article will hopefully address some of these important questions. This is the third entry in a series of articles examining how to make LEGO Hogwarts students. In my previous two articles I examined 20 Gryffindor students and listed all the parts you need to create the characters for yourself. If you haven’t already, I recommend going back and reading these. In this article, I will be specifically focusing on Slytherin minifigures and all the parts needed to create them.

Hogwarts School had a strict uniform code. Students were expected to wear white shirts and ties. FireStar Toys custom minifigure team has made the perfect part for this. They even included an appropriate green and silver tie print to represent Slytherin house. Hogwarts students are more commonly seen with a grey V-neck jumpers over their shirts. There’s an official LEGO torso piece. This part was originally in the expensive Hogwarts Castle sets but has now been made available with the much cheaper Harry Potter accessory pack. Of course you can always use the torso from years ago, too, you know, when Harry Potter students were yellow? 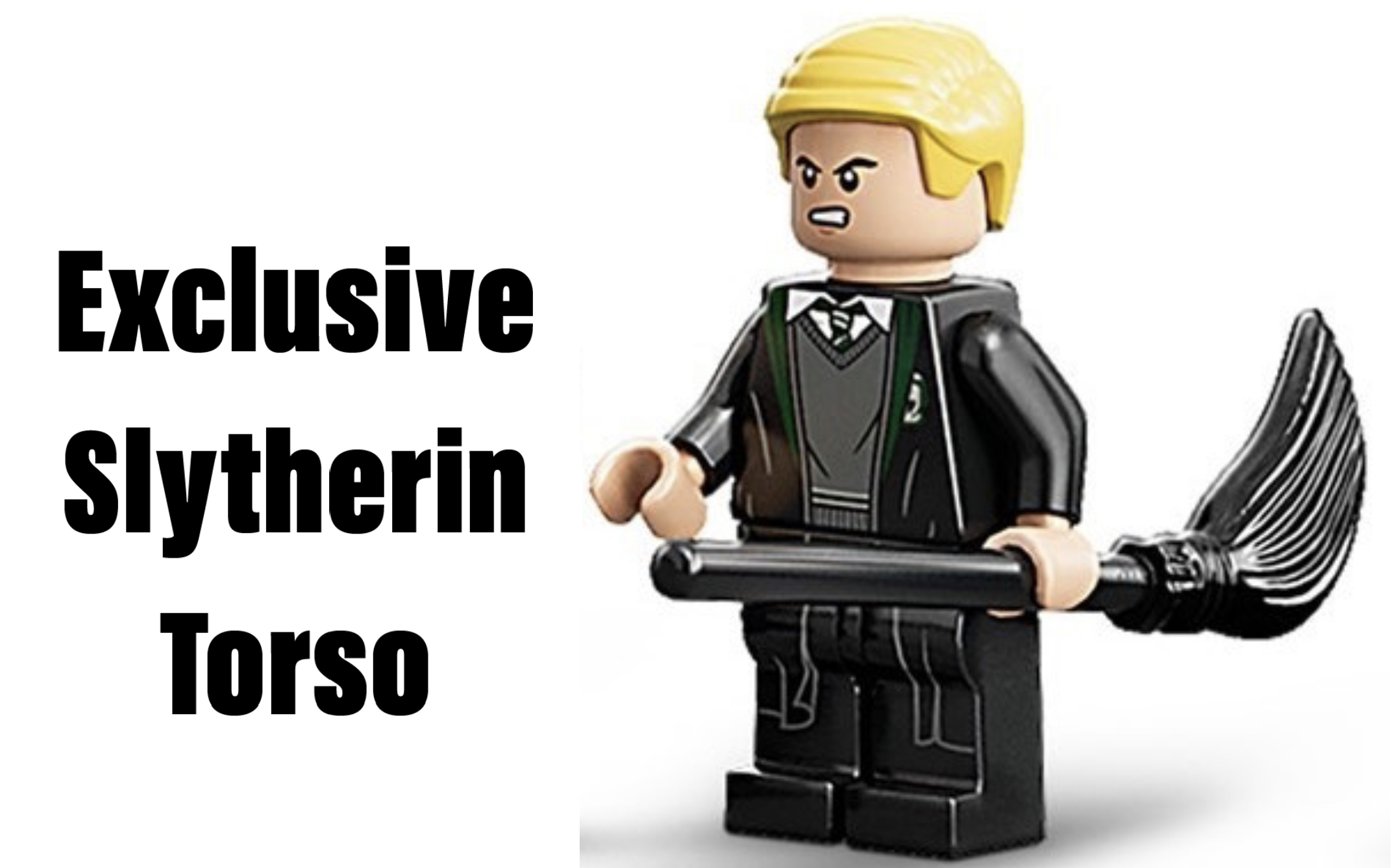 Choosing the right leg piece for your minifigures is important. LEGO minifigures typically use black short leg pieces to represent first and second year students. Black mid-leg pieces are normally used by LEGO to depict third and fourth year students. Students in their fifth, sixth and seventh year at Hogwarts tend to be given full sized minifigure legs.

Remember, so far, all the LEGO Slytherin toros have used pale flesh hands. If you want to depict characters such as Blaine Zabini or Pansy Parkinson you will need to switch out the hand pieces. Fortunately, FireStar Toys sell a whole host of different minifigure hands. This should make it easy to acquire the right hands for your Hogwarts students.

Before recreating characters, it is worth establishing that not all the characters in this article are in the same year as Harry Potter. For example, Marcus Flint graduated from Hogwarts in Harry’s third year. Other characters may be younger than Harry. Fans who wish to be incredibly accurate need to bear characters ages in mind when choosing minifigure legs. If you wish to recreate an entirely accurate collection of Hogwarts students it would be beneficial to decide which year you want Harry to be in before you start purchasing parts.

Having established all the foundations for building a Hogwarts Student collection, let’s begin examining Slytherin characters. 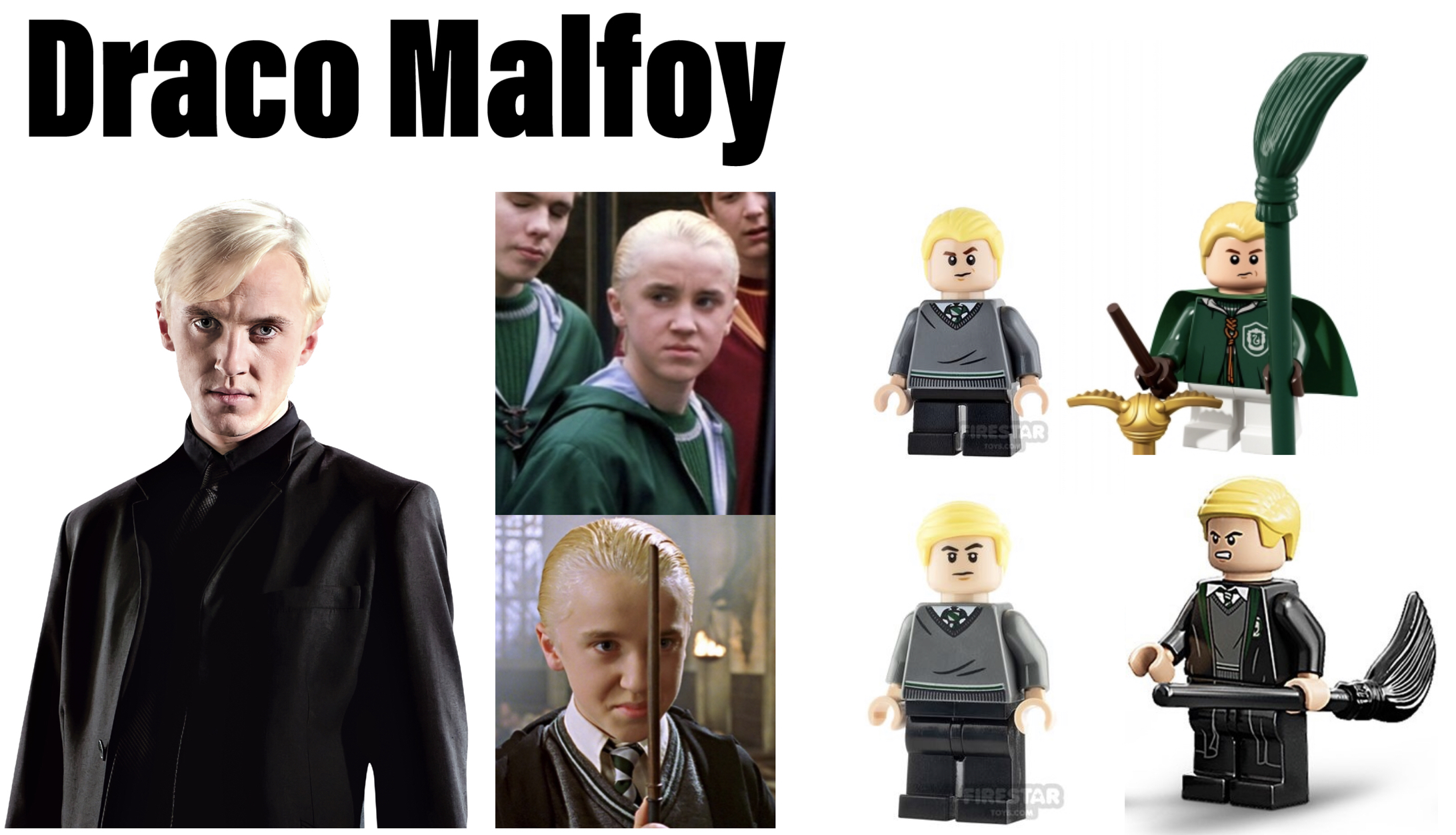 Draco Malfoy was Harry Potter’s arch nemesis at Hogwarts. His father, Lucius Malfoy, was a powerful Death Eater who worked at the Ministry of Magic. The Malfoy family also kept Dobby the house elf as their slave. Draco has appeared in several LEGO sets. A first year Draco Malfoy was depicted in the Great Hall set. Older versions of Draco can be found in the Hogwarts Astronomy Tower and the Hogwarts accessory pack. 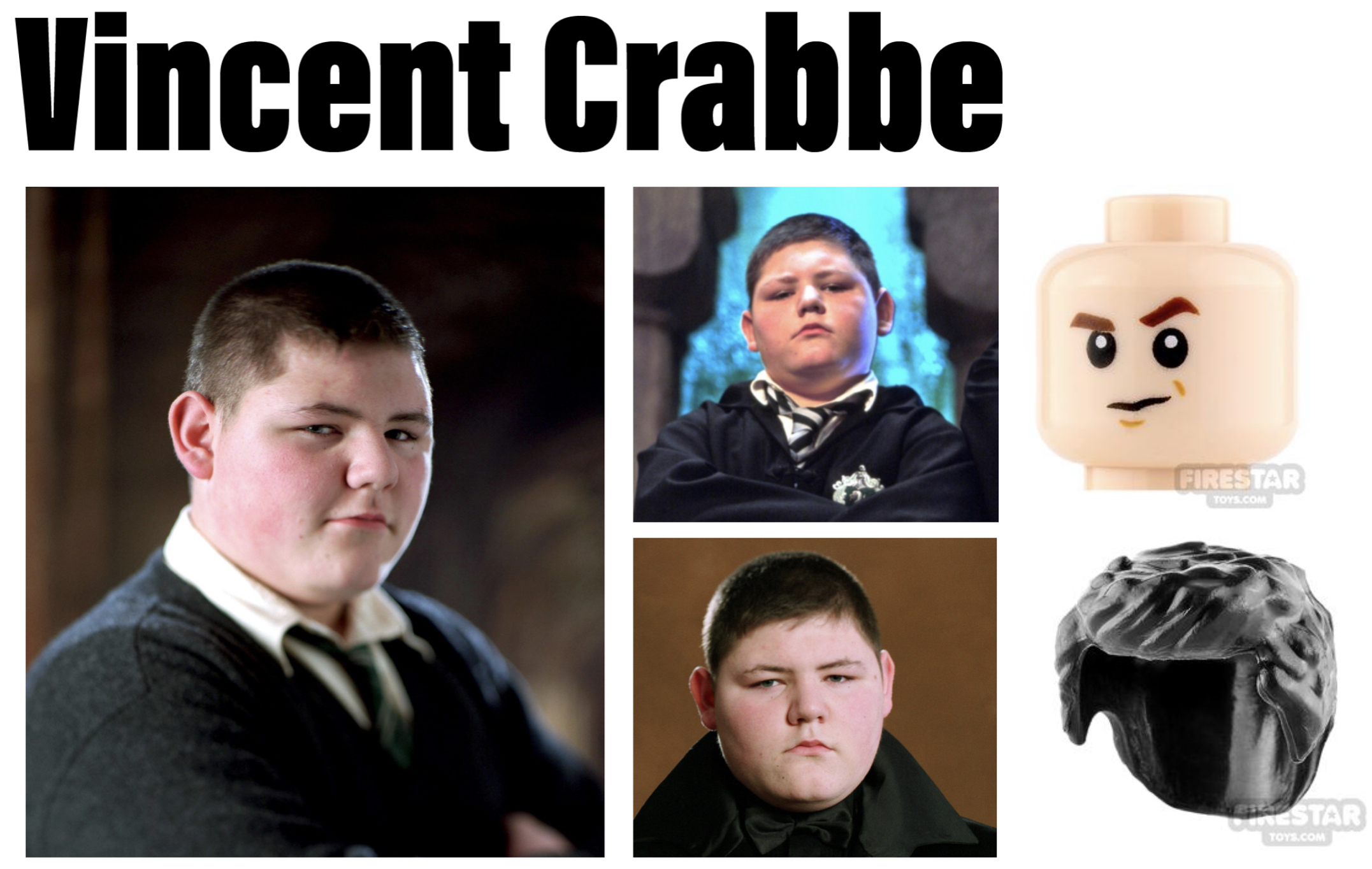 Vincent Crabbe was one of Draco’s cronies. Ron Weasley used the polyjuice potion to turn into Crabbe during Harry’s second year at Hogwarts. I struggled to find a hair piece that captured Crabbes’s short hair style. Ultimately, I settled on a swept back hair piece and a curious face print. I’ve included some links to alternative hair pieces if you disagree with my choice. 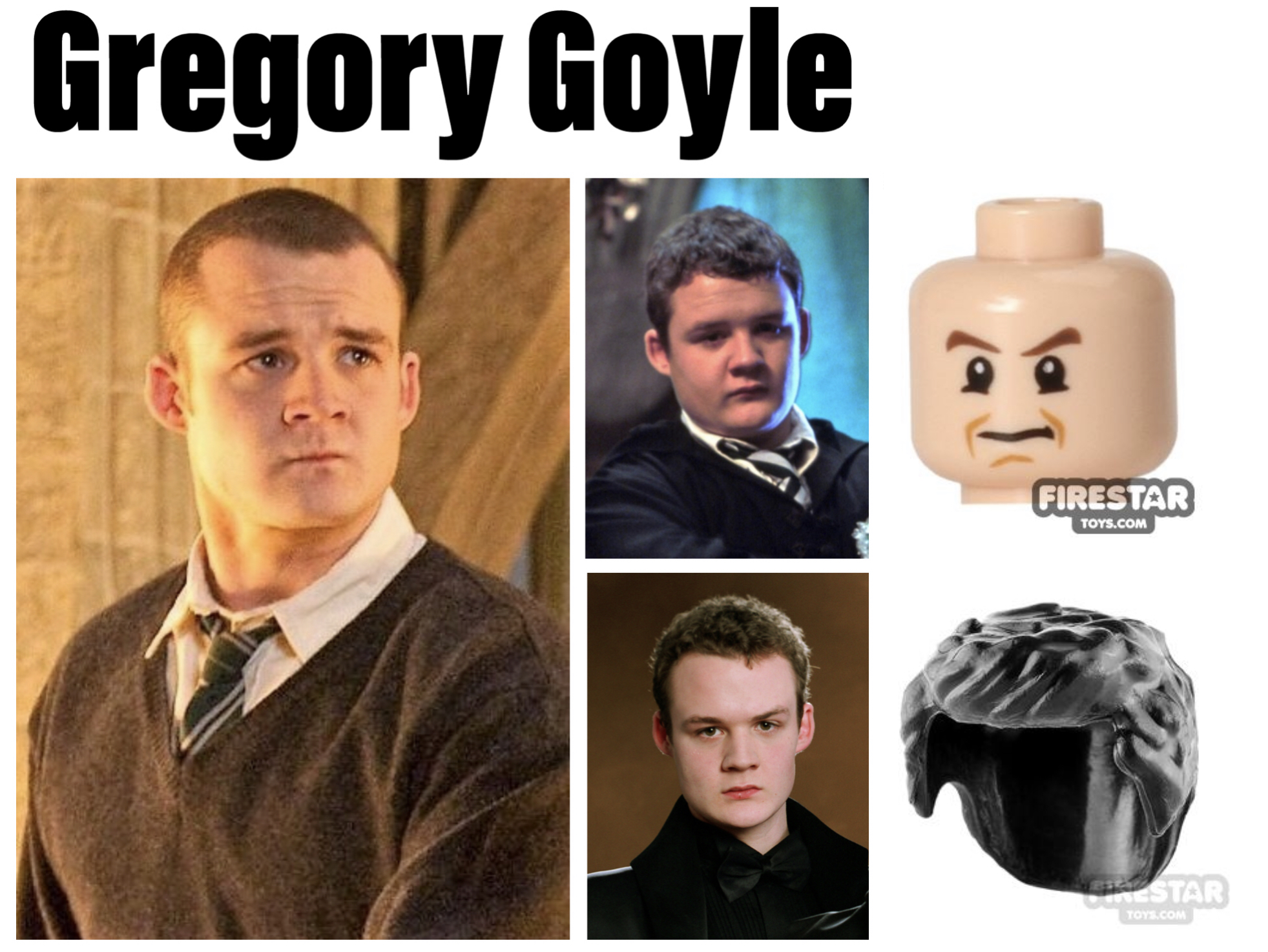 Goyle is another one of Malfoy’s cronies. Harry used the polyjuice potion to turn into Goyle in his second year at Hogwarts. LEGO produced a Goyle minifigure back in 2011. The face print they produced still holds up fairly well so I recommend using it if you attempt to make your own Goyle minifigure. Like Crabbe, I struggled to find an appropriate hair piece although I settled on a swept back black hair piece. Hopefully LEGO will produce official Crabbe and Goyle minifigures in the near future. 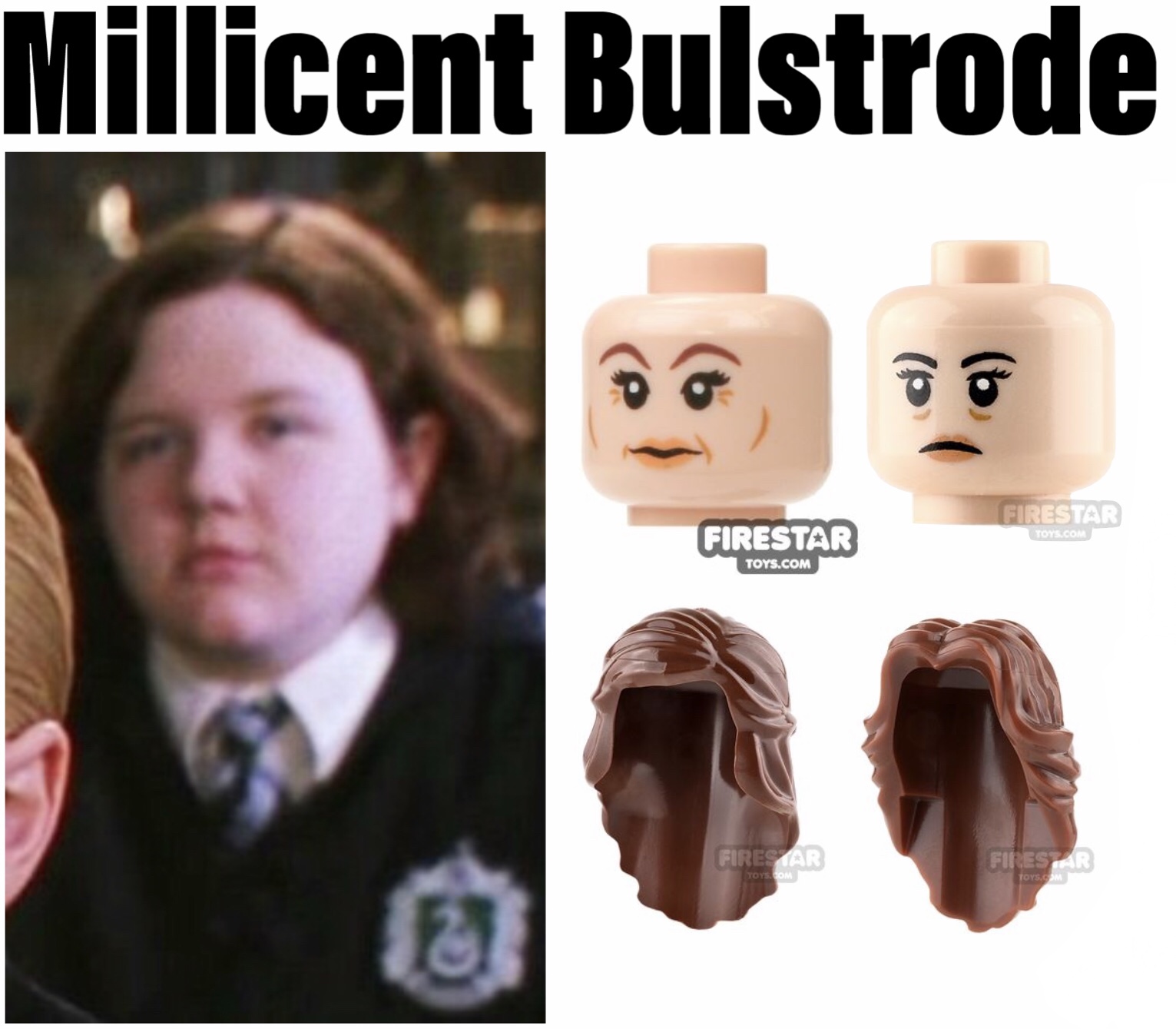 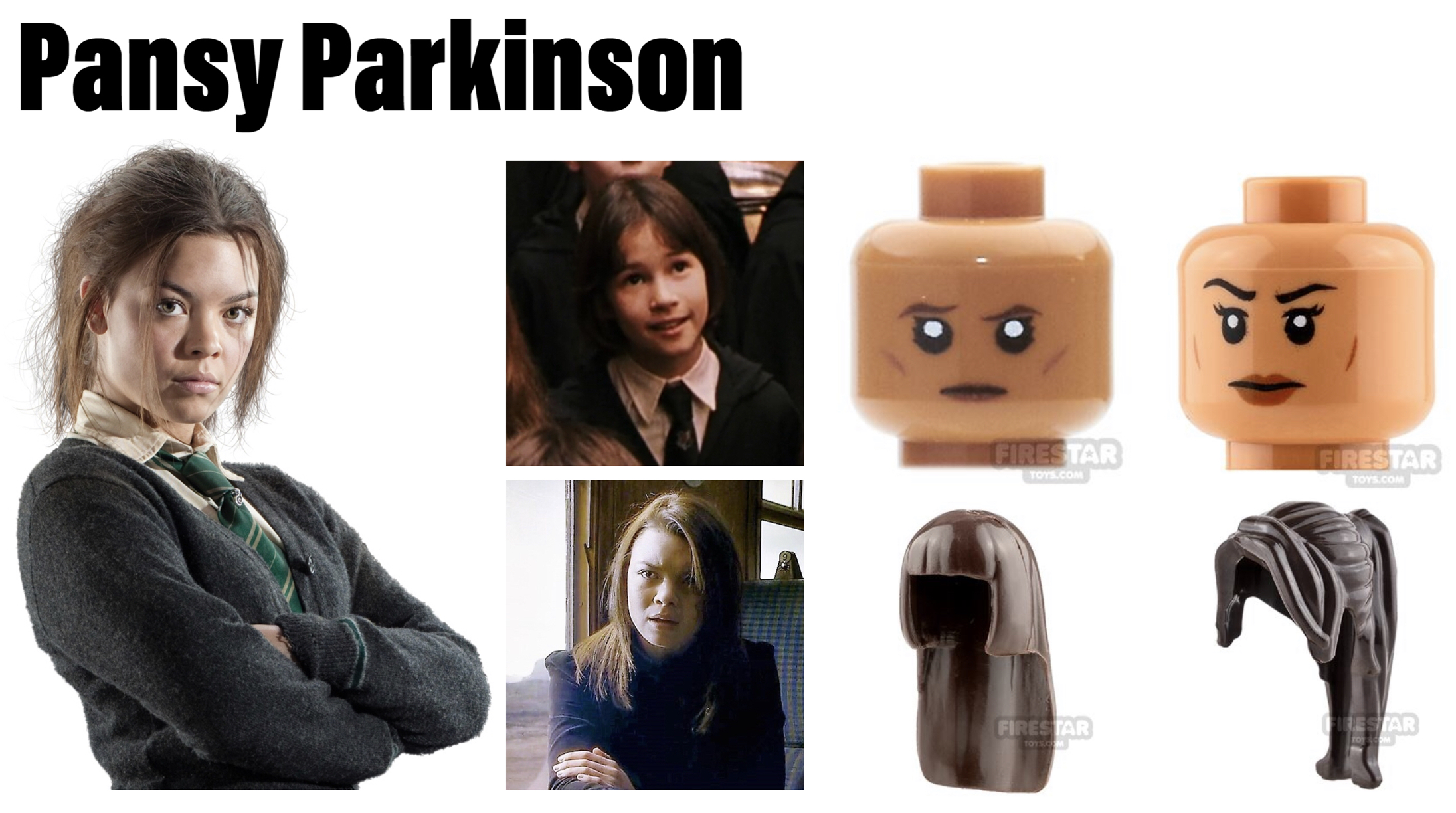 Pansy Parkinson was a close friend of Draco Malfoy’s. She became a Slytherin prefect in her fifth year at Hogwarts. She also joined Delores Umbridge’s Inquisitorial squad. I was unsure what skin tone to use for Pansy but I ultimately settled on medium dark flesh (as it’s the colour LEGO used to represent Cho Chang’s skin tone).  A stern face works really well but the neutral angry face is a good alternative. I recommend using long straight hair with bangs to represent a young Pansy or a dark brown pony tail with side fringe to represent her appearance in the later films. 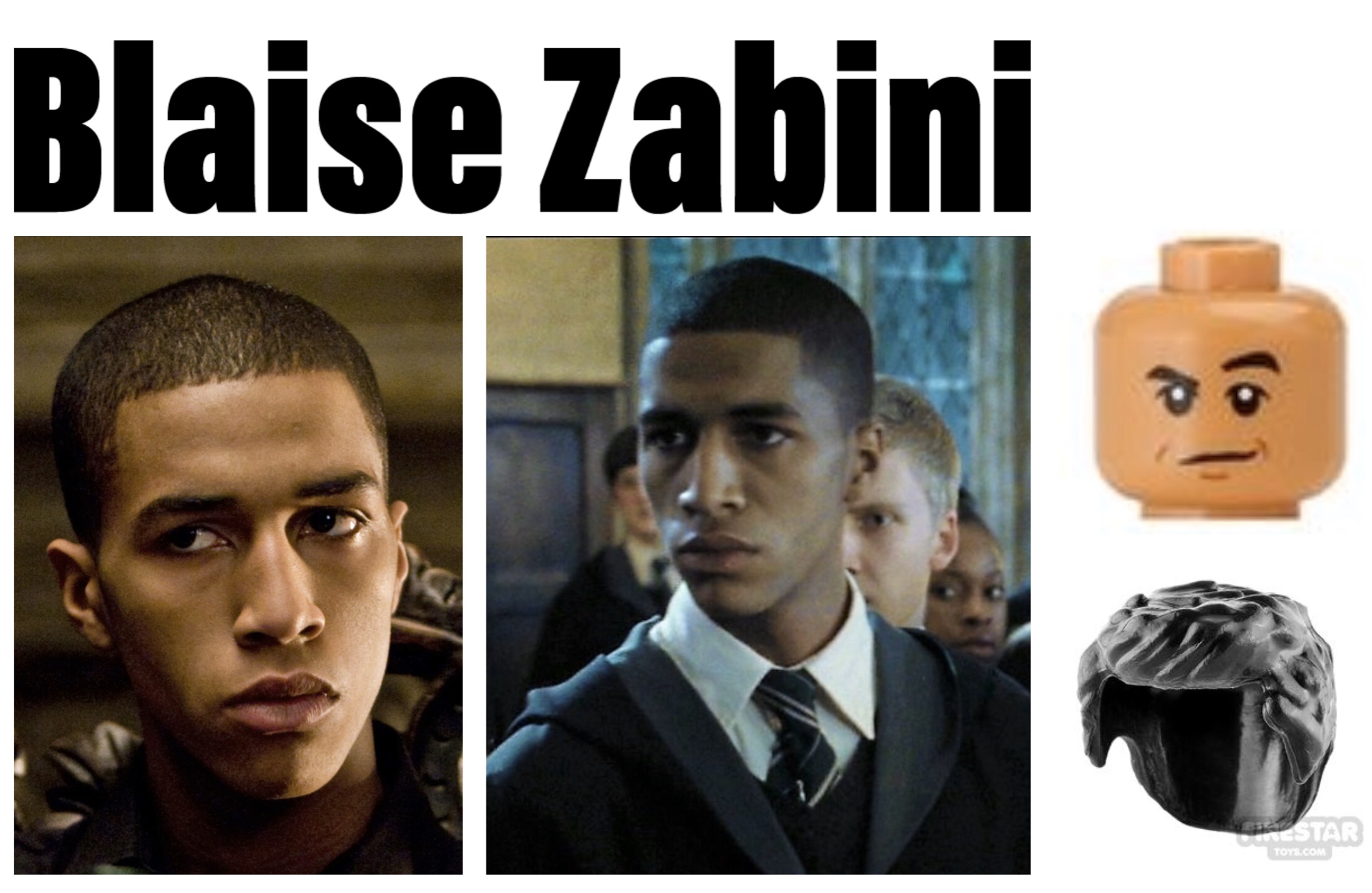 Blaise Zabini was a Slytherin student who was first featured in the Half Blood Prince. He played for the Slytherin Quidditch team and was friends with Draco and Pansy. To create your own Blaise minifigure I recommend using a medium dark flesh smile face. Like Crabbe and Goyle, it was hard to find a low-cut hair piece. I think the swept back piece looks best but I’ve included some links to alternative hair pieces if you disagree. 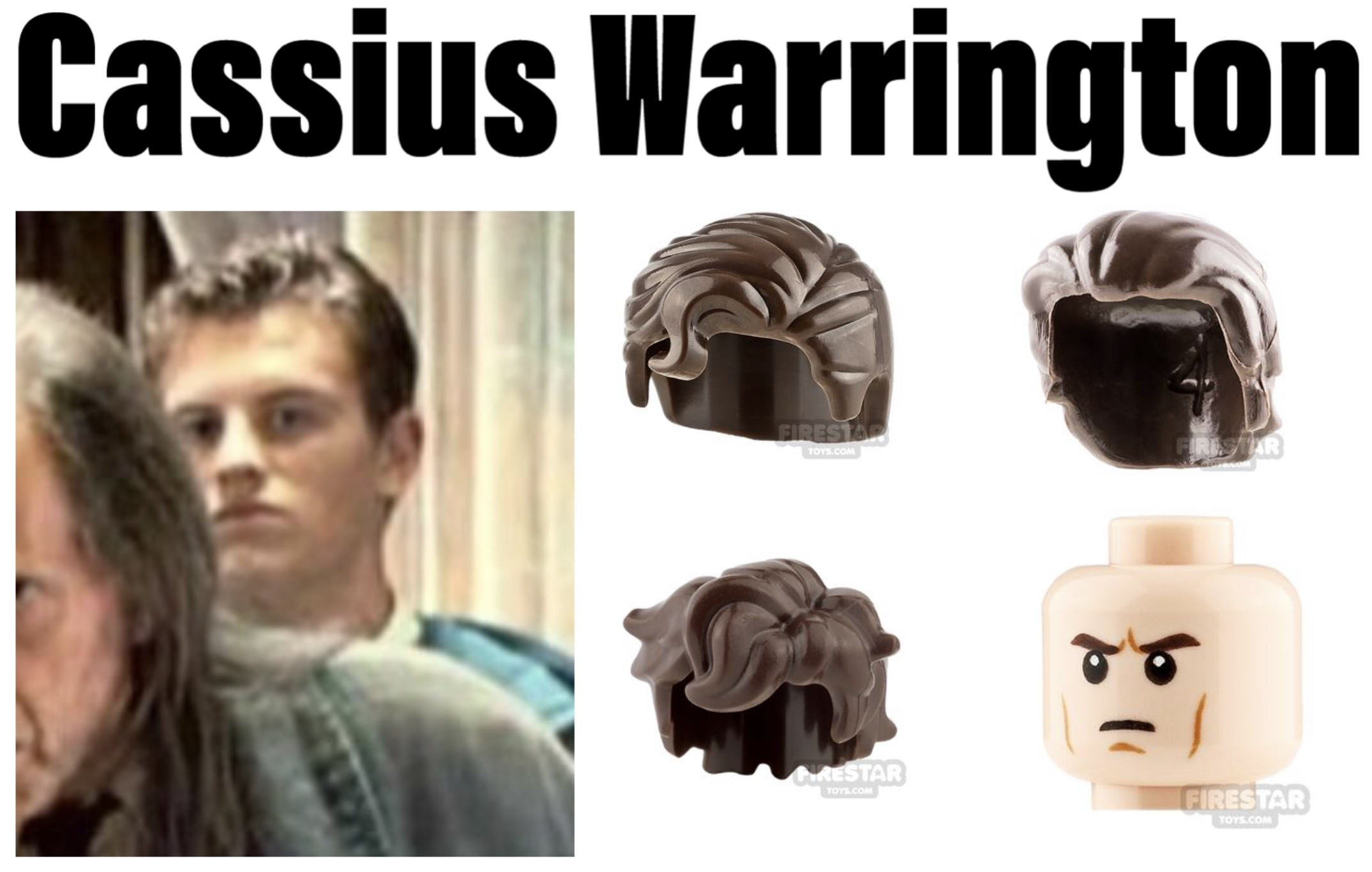 Cassius Warrington replaced Adrian Pucey as a chaser on the Slytherin Quidditch team. In Harry’s fifth year at Hogwarts Cassius joined Delores Umbridge’s Inquisitorial squad. I think a pale flesh frown face works perfectly for Cassius. Unfortunately, I was unable to settle on a hair piece. I think LEGO’s front hair wave piece is probably the best fit but a tousled and messy piece or swept back hair piece could also work. Please help me settle this by leaving your thoughts in the comments section below. 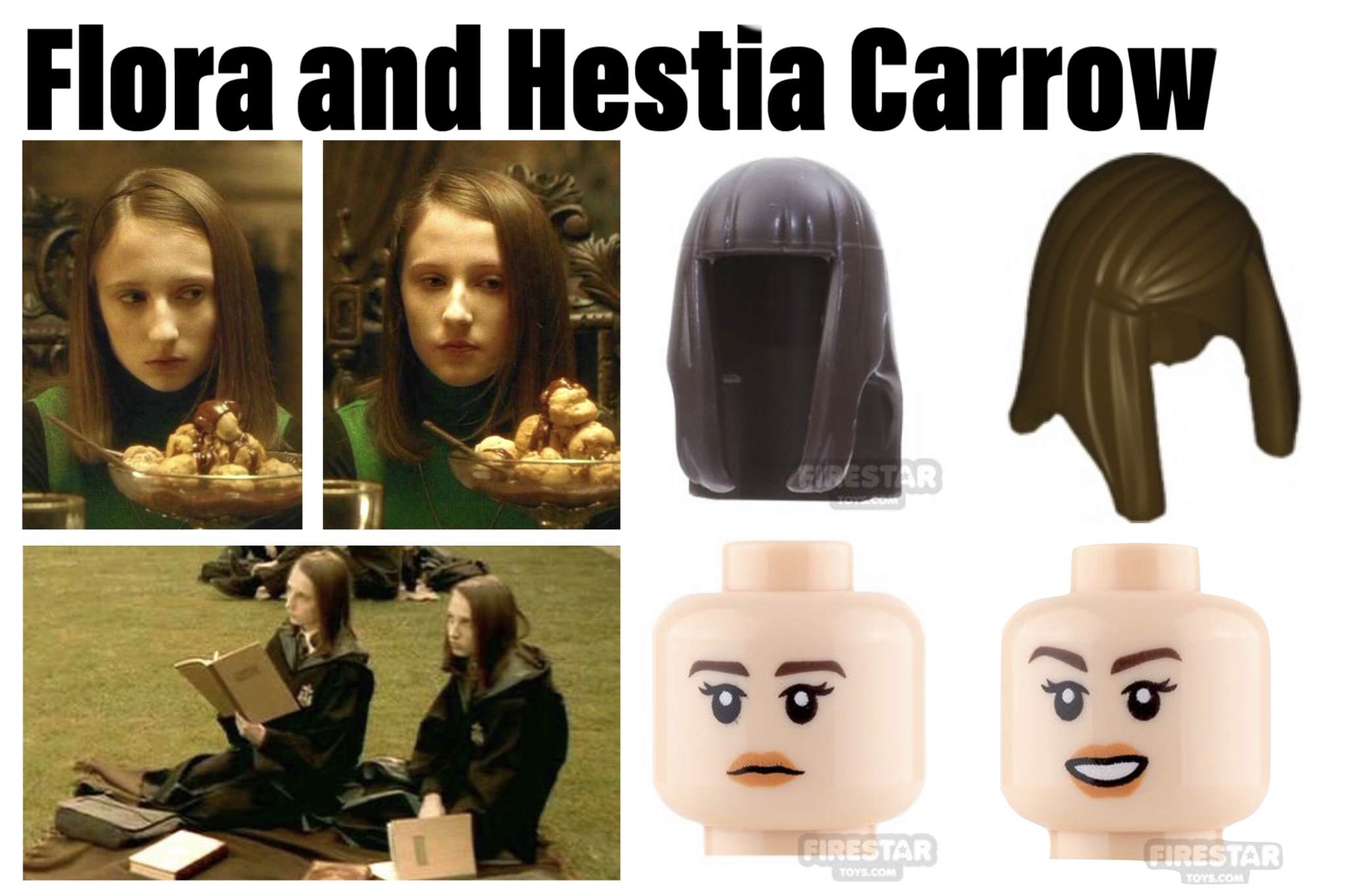 Flora and Hestia Carrow were identical twins in Slytherin house. They were both members of the Slug club in Harry’s sixth year at Hogwarts. They may have been related to Alecto and Amycus Carrow (Death Eaters who became Hogwarts teachers in what would have been Harry’s final year at Hogwarts). I recommend using a stern pale lipped face print to depict the Carrow twins. A long straight hair piece would would work well for the Carrows. An alternative would be a long hair piece with fringe. 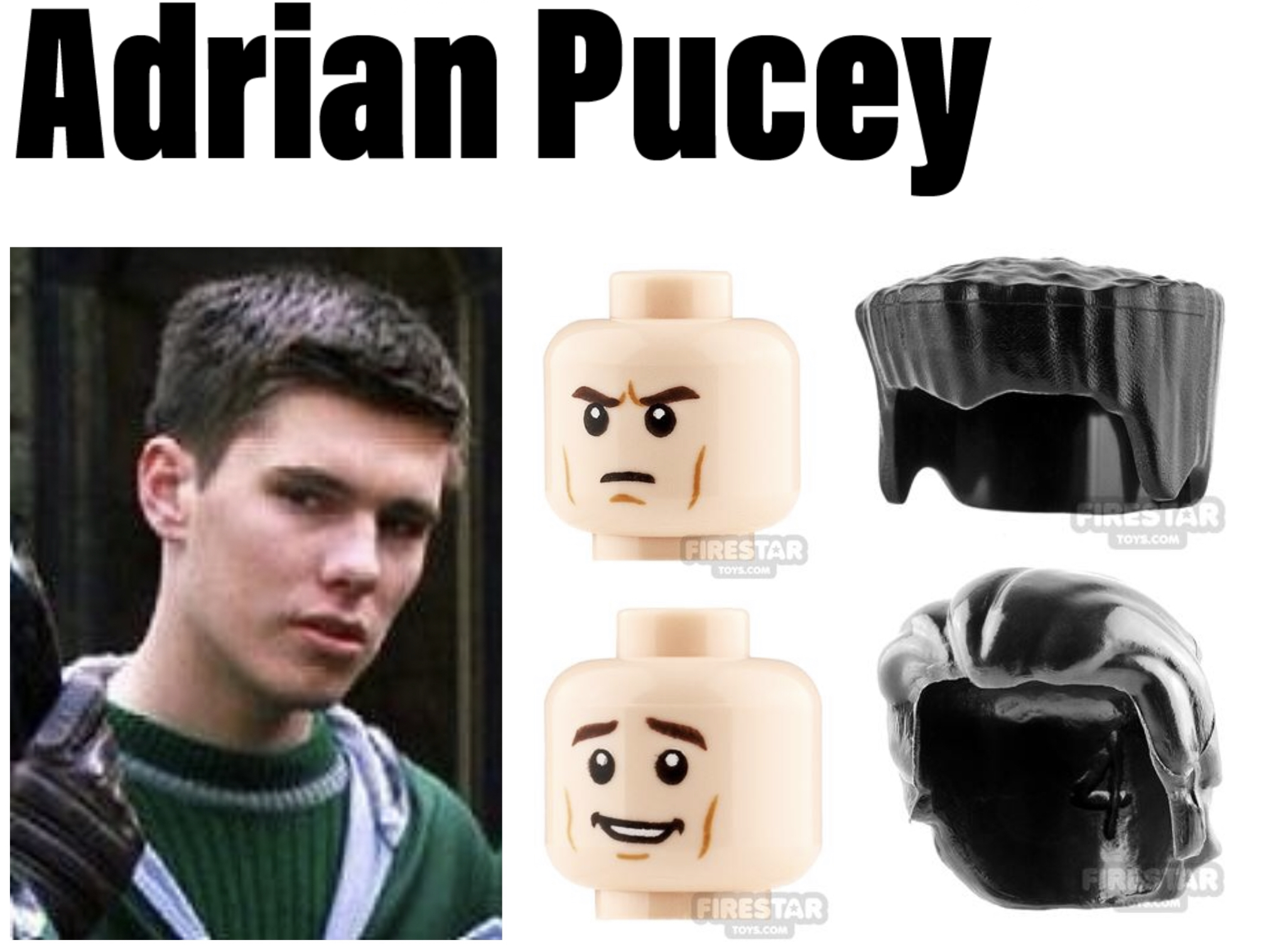 Adrian Pucey served as a chaser on the Slytherin Quidditch team in Harry’s first two years at Hogwarts. Making your own Adrian Pucey minifigure is relatively simple. I recommend combining a frowning face with either a flat top or a swept back hair piece. 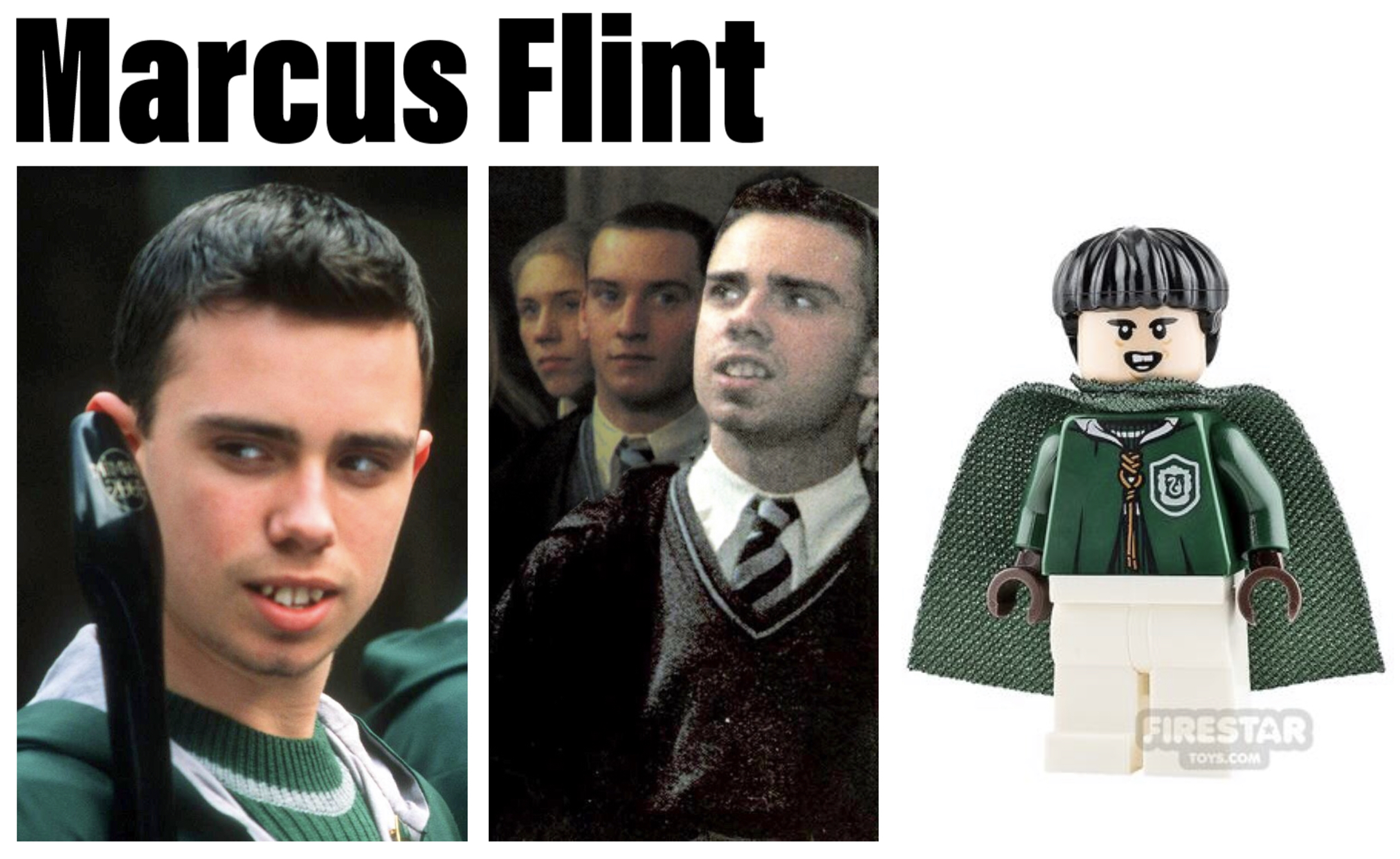 There are so many Hogwarts students that haven’t been represented in minifigure form. This list of Slytherin minifigures hardly scratched the surface. Keep reading FireStar Toys blogs if you want to see an article on creating Ravenclaw students.

If you haven’t already, make sure you check out my first two articles on creating Gryffindor students.

Do you disagree with any of the part choices I made? What would you have done differently? Please weigh in by sharing your thoughts in the comments section. I’d love to hear your opinion on the matter.

Images were taken from Brickset and Harry Potter Wiki. I also used these sites when conducting research for the article.