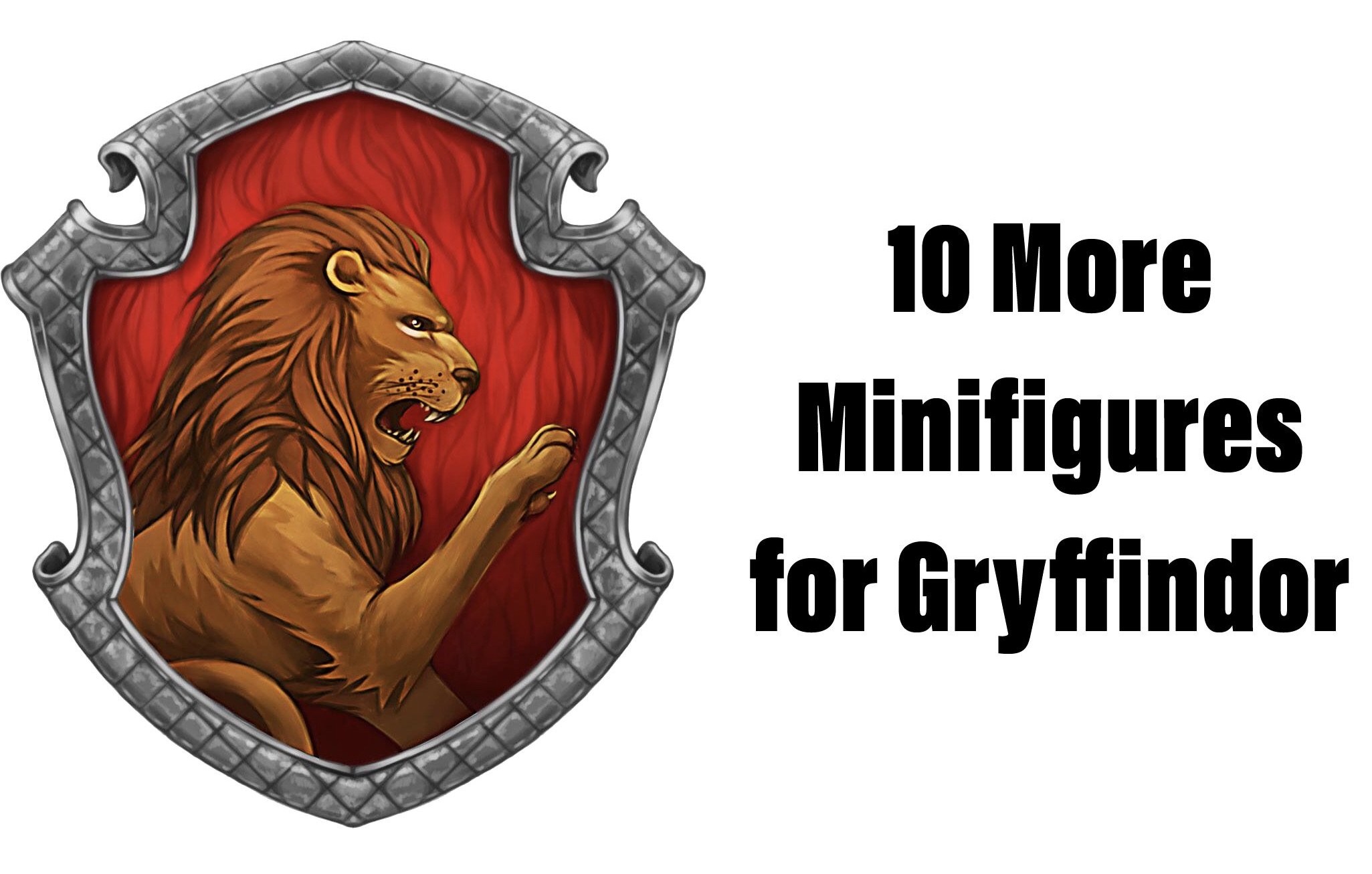 When LEGO revived the Harry Potter theme in 2018, one thing was notably absent from the new waves of sets. Students! Considering Hogwarts is a school, there are surprisingly few student minifigures besides Harry, Ron and Hermione. Several named students have never been depicted in school uniform. LEGO has neglected some students entirely, choosing to ignore characters like Vincent Crabbe, Colin Creevey or Justin Finch Fletchley. This article is the second in a series of articles that list all the parts required to create your own Hogwarts students. If you haven’t already, make sure you check out my first article to learn about all the Gryffindor school uniform pieces you can acquire. This article will detail how to create 10 more Gryffindor students including some notable characters such as Romilda Vane, Percy Weasley and Lee Jordan!

Warning, some of the character descriptions in this article contain some spoilers for the Harry Potter books and films. I think they are very minor spoilers but I wouldn’t want anyone to feel that I spoilt the franchise for them. You have been warned! 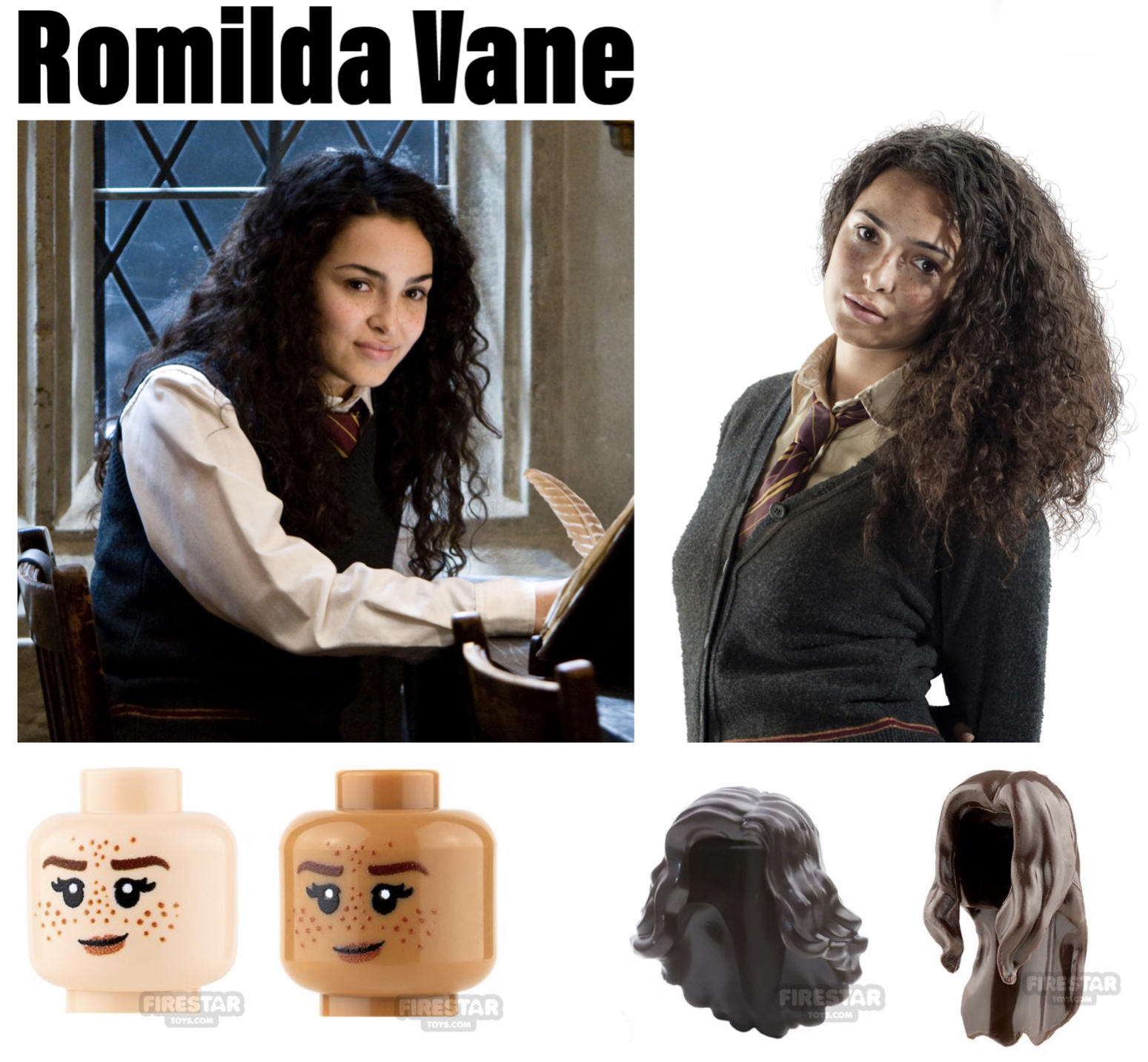 Romilda Vane attempted to drug Harry with a love potion in his sixth year at Hogwarts. Recreating this minifigure was fairly challenging. Which more accurately captures Romilda’s appearance, light or medium dark flesh? I’m inclined to think the dark flesh but the same freckled faced print can be acquired in light flesh if you disagree. It was also hard to find the perfect hairpiece. I ultimately recommend two different parts. The black hair with long wavy bangs somewhat captures her likeness but the mid length wavy hair may be a better choice. Please let me know your thoughts in the comments section. 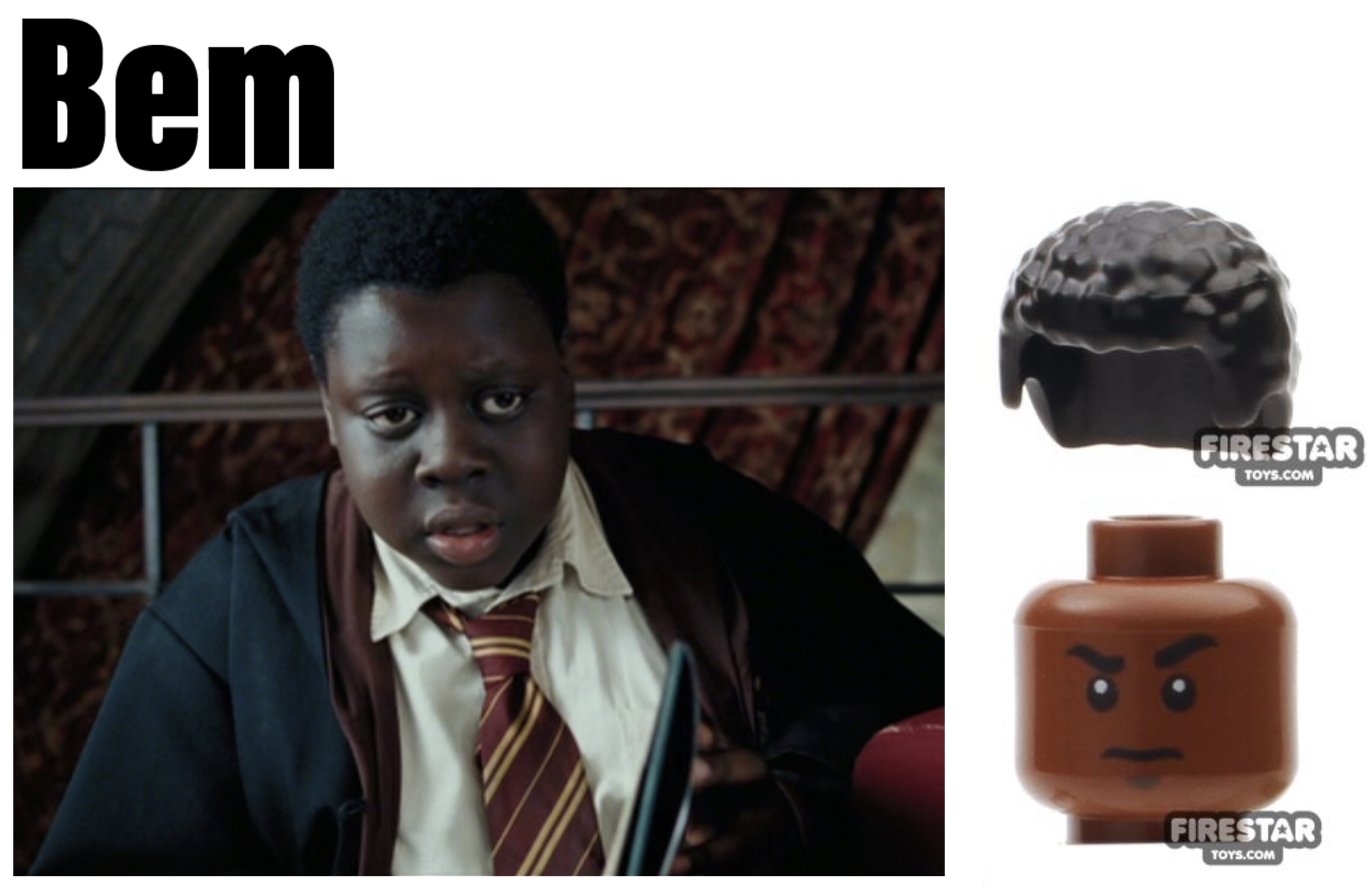 We are now moving onto characters who even the most hardcore Harry Potter fans may not know. Bem wasn’t in the books at all. He appeared in the third Harry Potter film, Prisoner of Azkaban and is known for delivering the chilling line “It’s like trying to catch smoke… like trying to catch smoke with your bare hands”. Recreating Bem in minifigure form couldn’t be easier. I recommend a scowl face with a short black afro piece. 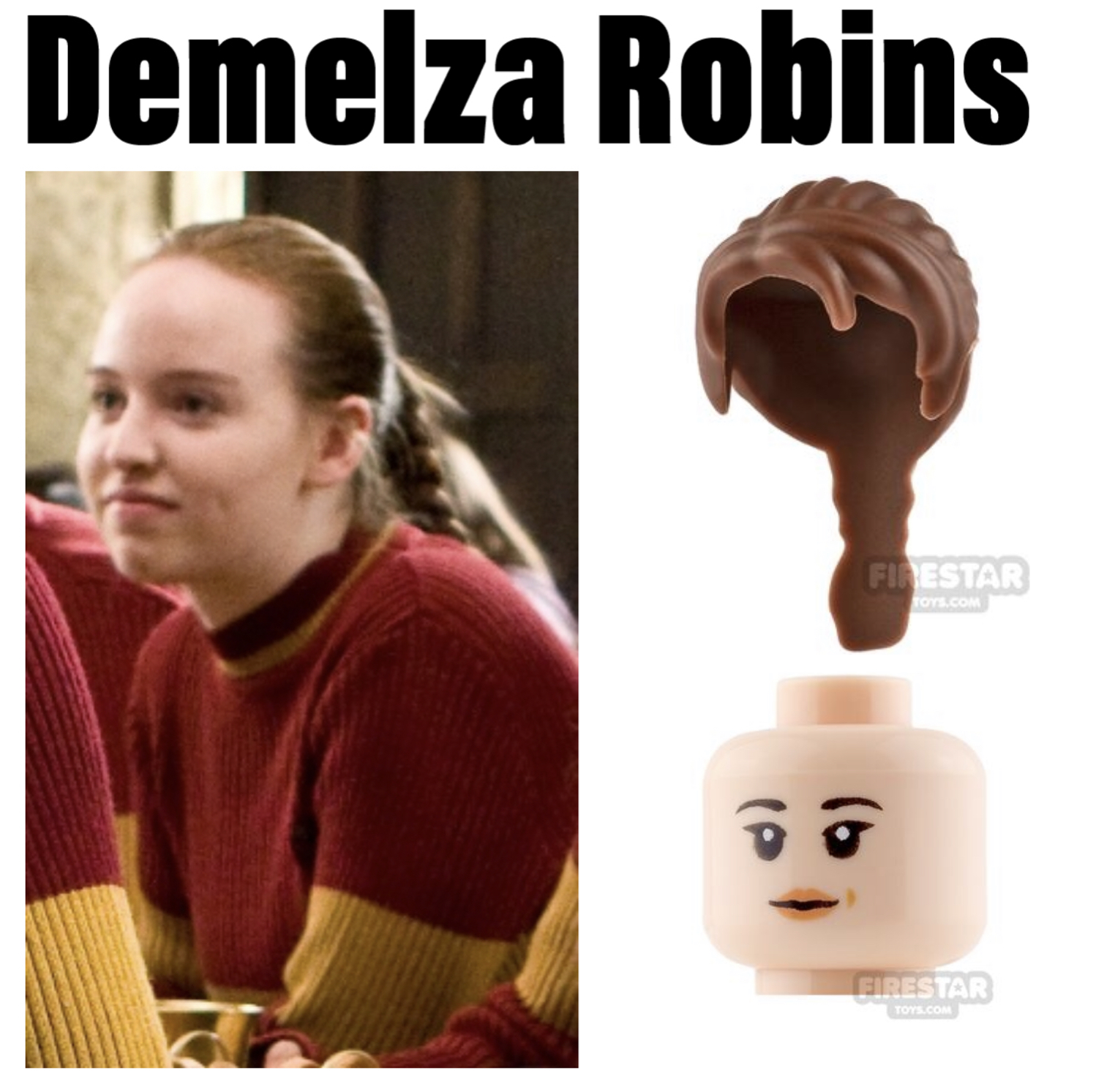 Demelza Robins was a chaser for the Gryffindor Quidditch team during Harry’s final year. She was younger than Harry (although it isn’t clear exactly how old she was). To recreate this minifigure I recommend a neutral female face and a reddish brown french braid. 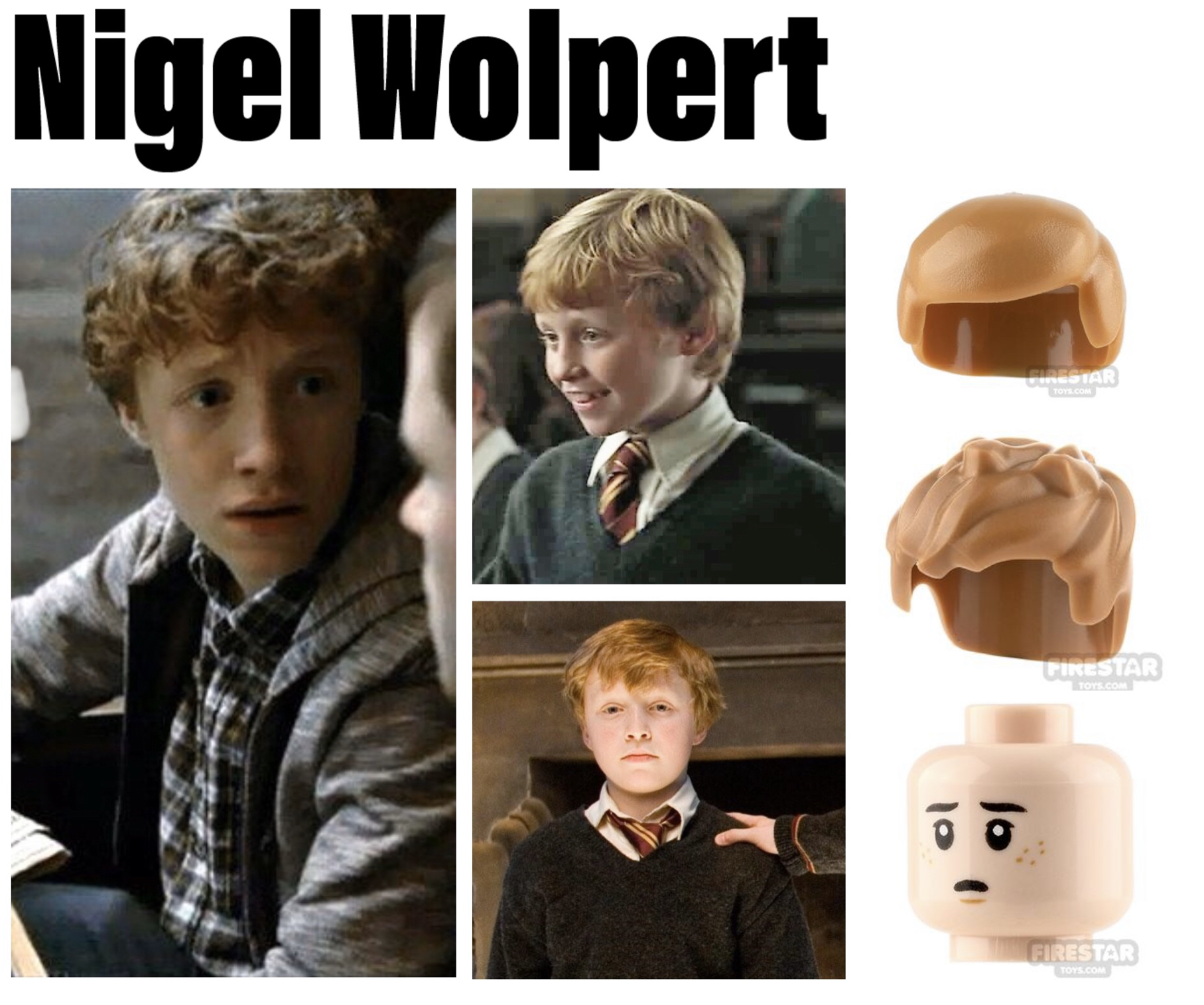 Nigel Wolpert joined Hogwarts in Harry’s fourth year. You may recognise him as the student who delivered Ron’s post after he was promised Harry’s autograph. He later joins Dumbledore’s Army. Harry stunned Nigel to demonstrate the stupefy spell to the other students. Recreating this minifigure was fairly simple although it was hard to distinguish the Nigel from the Collin Creevey minifigure I designed earlier (see my previous article). I recommend a worried and angry face print and a medium dark flesh short hair piece. Alternatively, you could use a short and messy hair piece. Let me know which hair piece you think works best in the comments section. I’d love to hear some opinions on the subject. 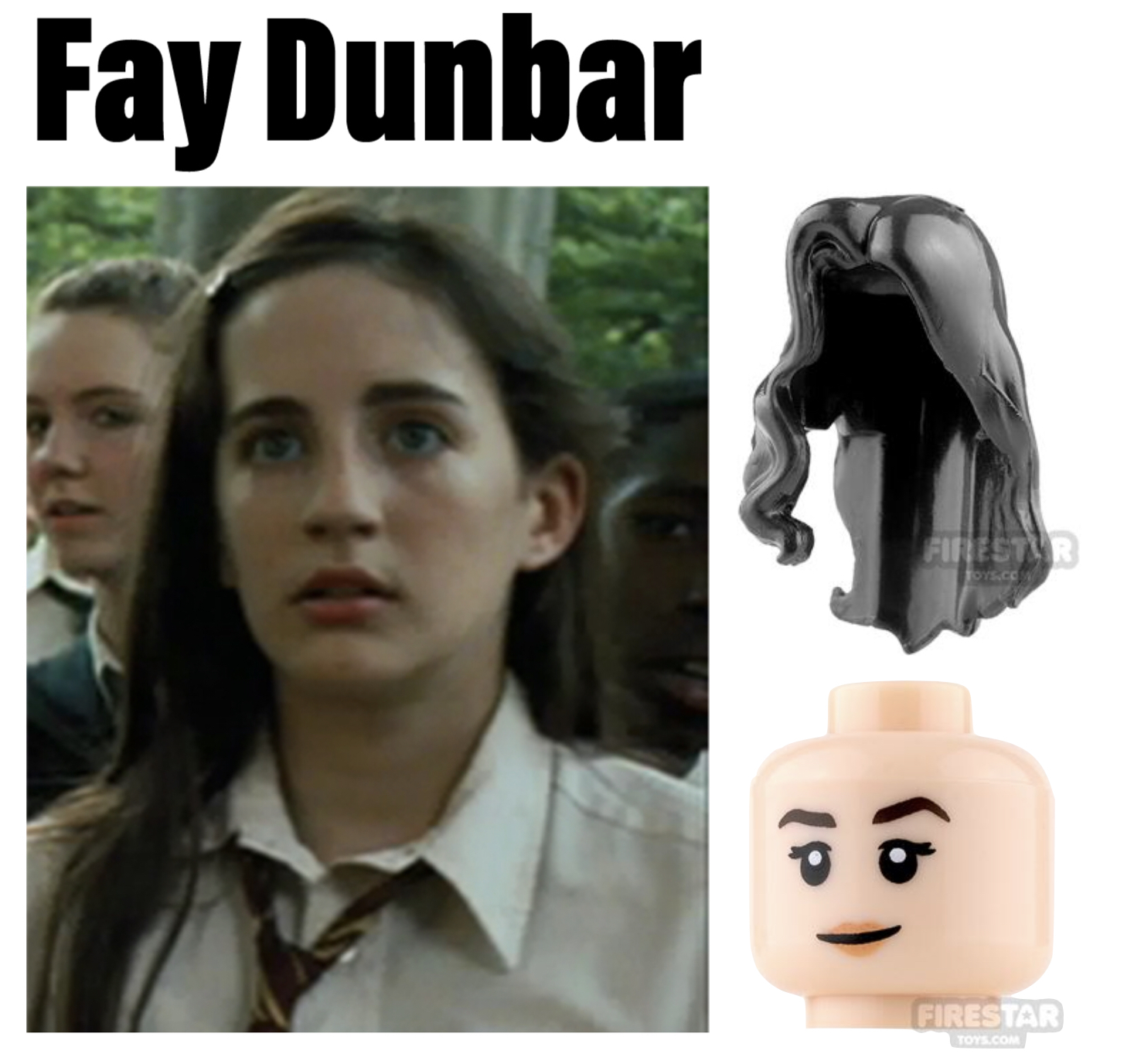 Fay Dunbar was a Gryffindor student who can be seen taking Care of Magical creatures in the third Harry Potter film. She shared a dormitory with Hermione, Lavender and Parvati. She once stated the Hufflepuff Quidditch captain, Cedric Diggory was the most handsome boy at Hogwarts. Fay enjoyed playing Quidditch and Gobstones. If you want to create your own Fay Dunbar minifigure, I recommend using a smiling face with a black wavy hair piece. 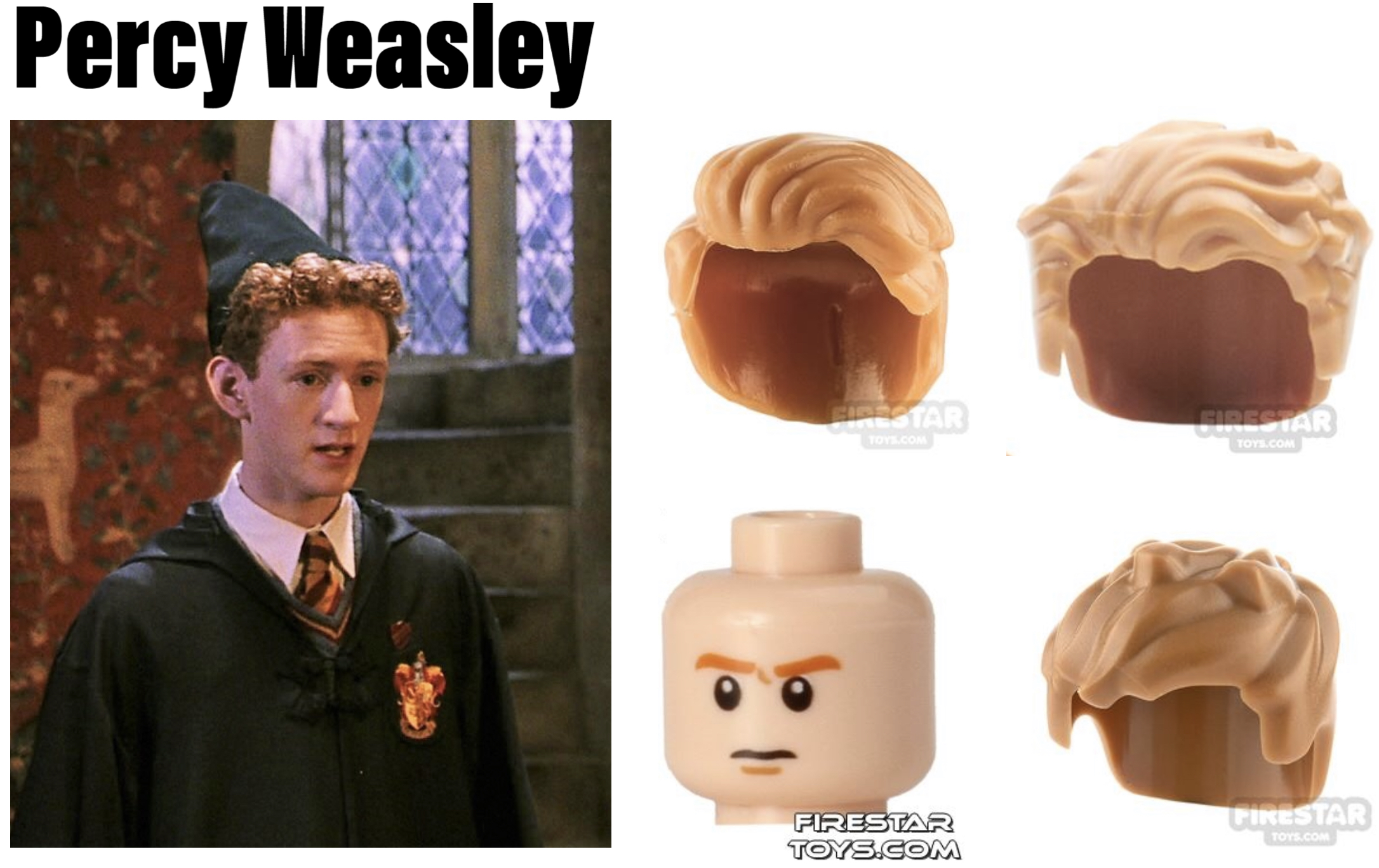 Percy Weasley was Ron’s older brother. He became a prefect and was eventually made head boy. Whilst at Hogwarts, Percy fell deeply in love with the Hufflepuff prefect Penelope Clearwater, however he ultimately married someone called Audrey. I recommend a frown head piece to display his seriousness. I found it very hard to find an appropriate hair piece for Percy. Although I think the swept back hair is best, you could also use a short messy piece or swept left hair piece to recreate the character.

Lee Jordan is the enthusiastic Quidditch commentator and best friend of the Weasley twins, Fred and George. He was two years older than Harry, meaning he graduated Hogwarts at the end of Harry’s fifth year.

Finding appropriate parts for Lee Jordan wasn’t easy. I found three hair pieces that are suitable. Tousled with long bangs, black maverick hair and mid length tousled with side parting. I think the maverick hair may be best choice but I’m not at all certain. Once again, if you have any thoughts please share them in the comments section. Fortunately, the head piece was a much simpler decision. I think the grin and angry face looks perfect.

Fun Fact: Lee Jordan was portrayed by Luke Youngblood in the Harry Potter films. Luke Youngblood is known for playing Magnitude in Community. Battered Fish Productions recently wrote a brilliant article on a Community project that recently achieved 10,000 votes on LEGO IDEAS. I wholeheartedly recommend you check out the article. If you’ve watched Community, you’ll find it a fascinating read. 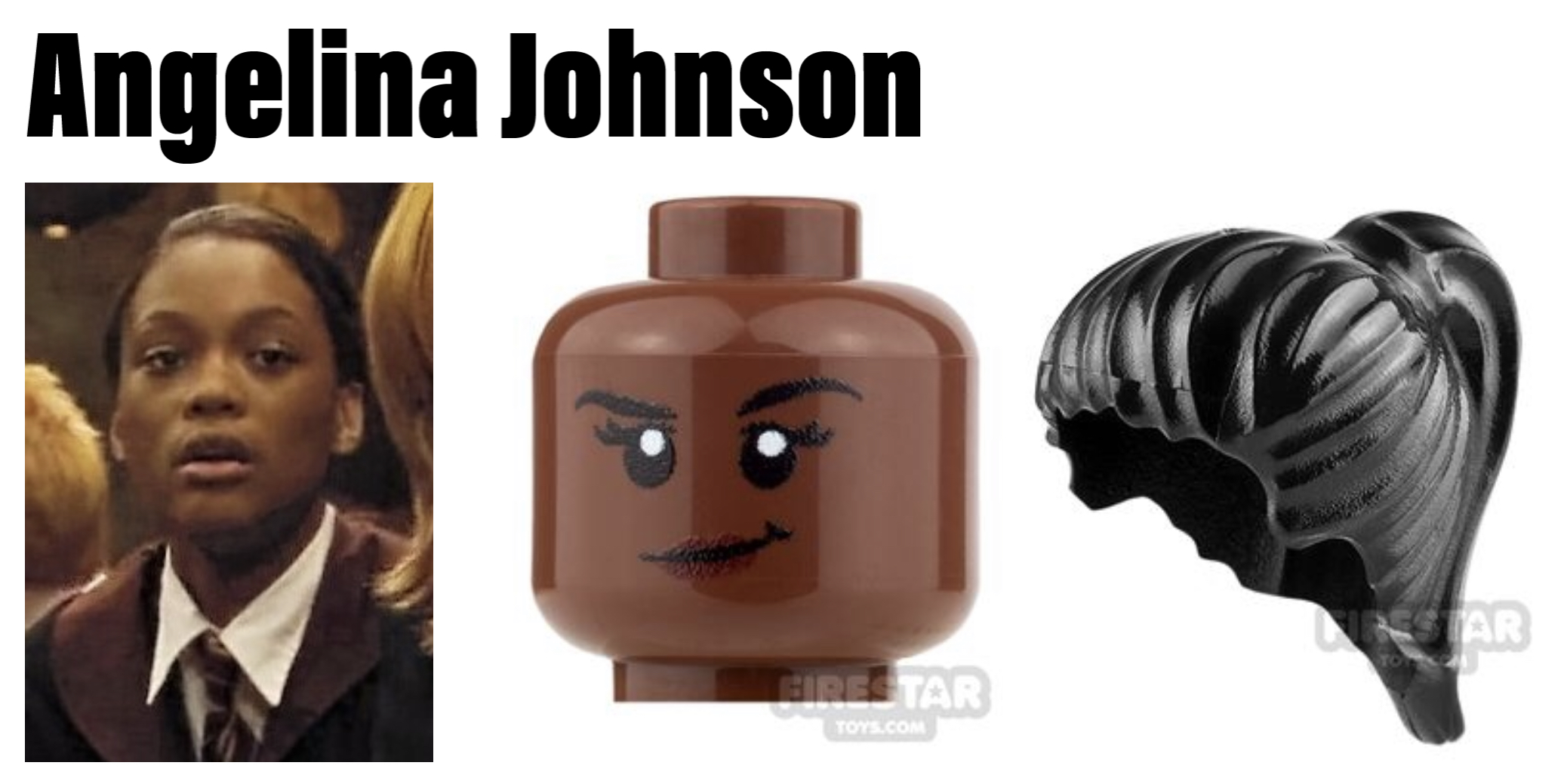 Angelina Johnson was a chaser and captain of the Gryffindor quidditch team in Harry’s fifth year at Hogwarts. She was in the same year as Lee Jordan. She eventually married George Weasley. Angelina Johnson can be seen wearing her hair in a ponytail, perhaps because this prevents hair going in her eyes when riding a broom stick. This look can be replicated using a reddish brown smirk face and black ponytail hair piece.

Katie Bell was a chaser on the Gryffindor Quidditch team. In Harry’s sixth year, Katie touched a bewitched necklace. She was lucky to survive the incident. Recreating Katie Bell is difficult due to the fact she was portrayed by two different actresses. In the first two films Katie was portrayed by Emily Dale. However, in later films she was played by Georgina Leonadis. For this article I attempted to recreate her look in the later Harry Potter films. I recommend using peach lipped minifigure face with dark brown tousled hair. 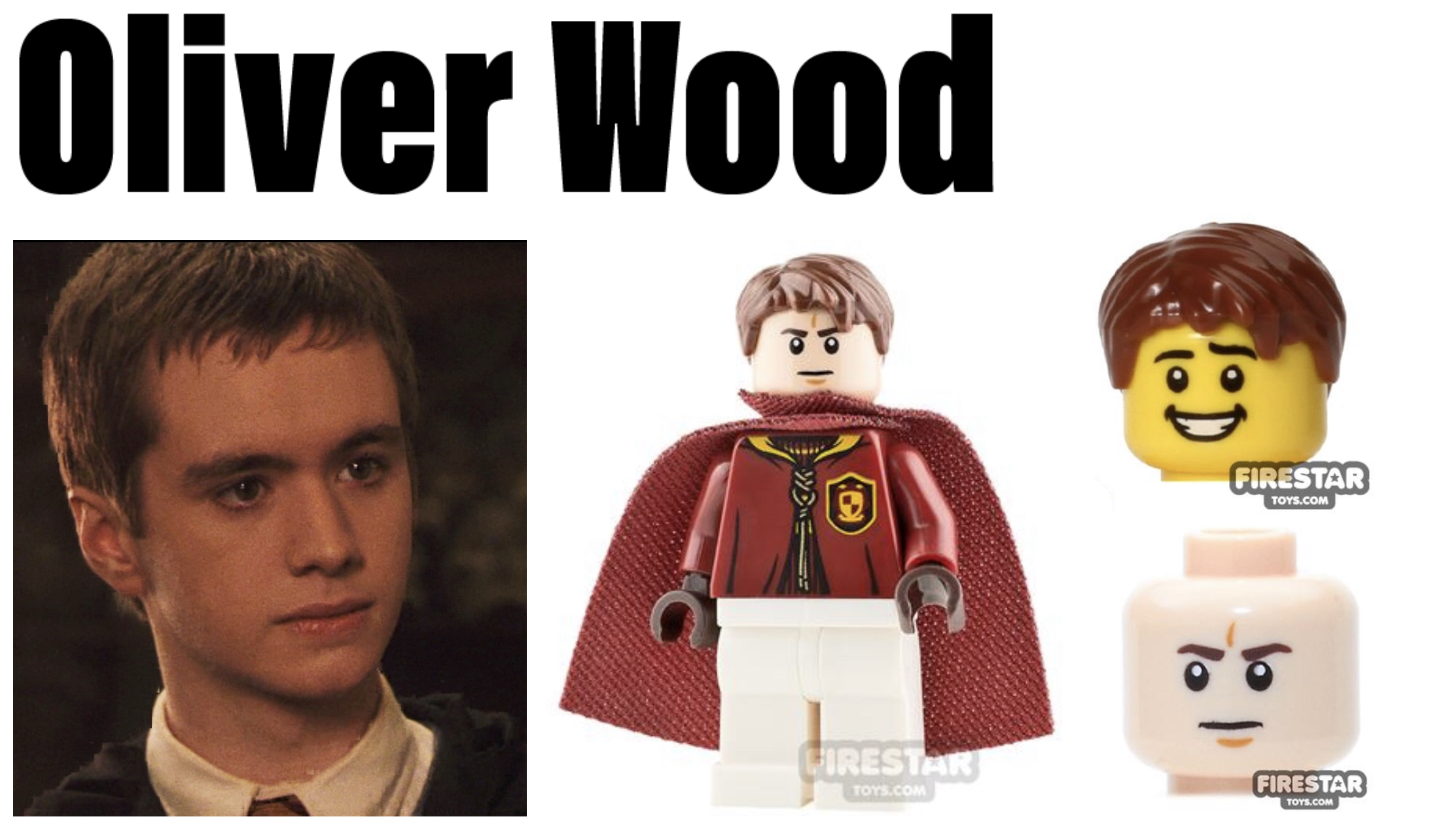 Oliver Wood was the Gryffindor Keeper and Quidditch Captain. He was older than Harry, graduating from Hogwarts at the end of Harry’s third year. An Oliver Wood minifigure has already been produced by LEGO. In 2018, the LEGO Quidditch Match set included Oliver in his Gryffindor Quidditch robes. If you want to recreate Oliver Wood in School uniform, I recommend using short brown tousled hair and a serious face print.

So, there you have it, 10 more Gryffindor students to add to your LEGO Harry Potter minifigure collection. If you enjoyed this article keep your eye on FireStar Toys’ blogs for more articles on creating Hogwarts students minifigures. In my next Harry Potter article, I will explain how to create 10 Slytherin student minifigures.

If you liked today’s article or have a suggestion for creating LEGO Hogwarts students, let me know in the comments section. I’d love to start a conversation and get your input.

Who is Jedi Bob? All about the man, the myth, the legend!