Well. This article has been in the making of 6 months. Why? Let me tell you a story. Last June, before Uni had started, I decided to write a few articles to get ahead, so that I could have blogs to be out during exam time so I could focus on that. I think I may have written 2 or 3 articles ahead of time. However, in the second week of uni during the semester, I was nicely eating lunch with a water bottle in my hand. It slipped and dropped – spilling a whole 300ml of water onto my MacBook. Basically, I lost three articles that day and about 6 hours of work – in addition to all my uni stuff. I had thankfully already sent part 1 of my 2014 retrospective. However, part 2 wasn’t that lucky. I waited this long to write Part 2 because I thought I could move all those files over to this new MacBook. Unfortunately, I cannot so we are starting from scratch. Yay. So, finally, my 2014 LEGO Marvel retrospective will be coming out – after a six-month delay. So I hope you enjoy it… 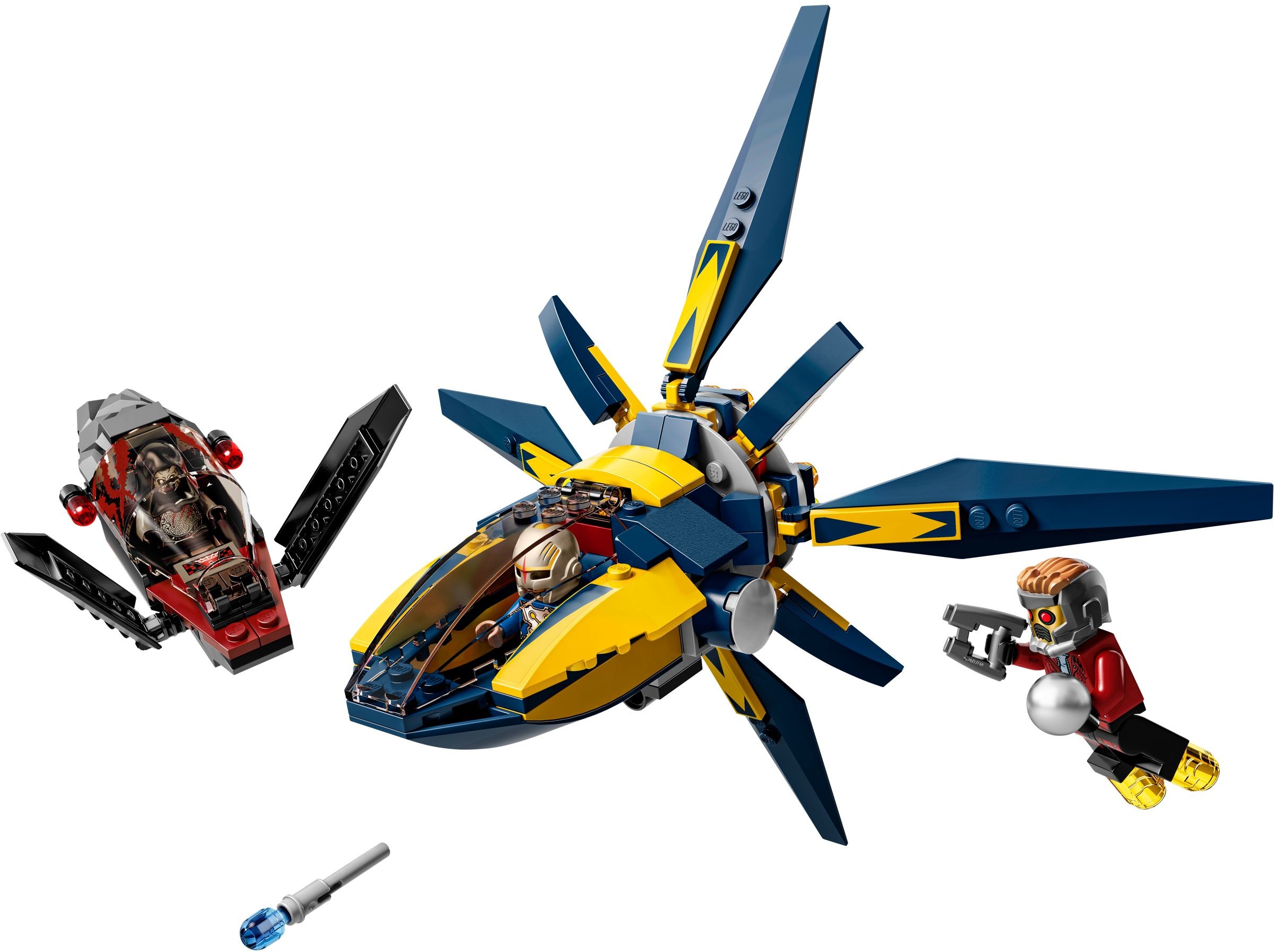 Retailing for $20 USD, this set comes with three minifigures. Star-Lord’s helmet was a completely new mould, with the helmet and hair combined. He received the first-ever face print, meant to match the likeness of Chris Pratt, the actor. His torso and legs were movie accurate. His accessory was a newly moulded blaster – something that looks like it was straight out of Halo, the game. The second accessory was an orb that held the power stone. The Nova Corps Officer was another great minifigure – with another amazing helmet mould. He came with a nice face print. His torso was quite simple, and he received no leg printing. The Sakaaran was also a well-done minifigure. The head and torso print were very well detailed – and he came with a newly moulded Halo-like weapon. 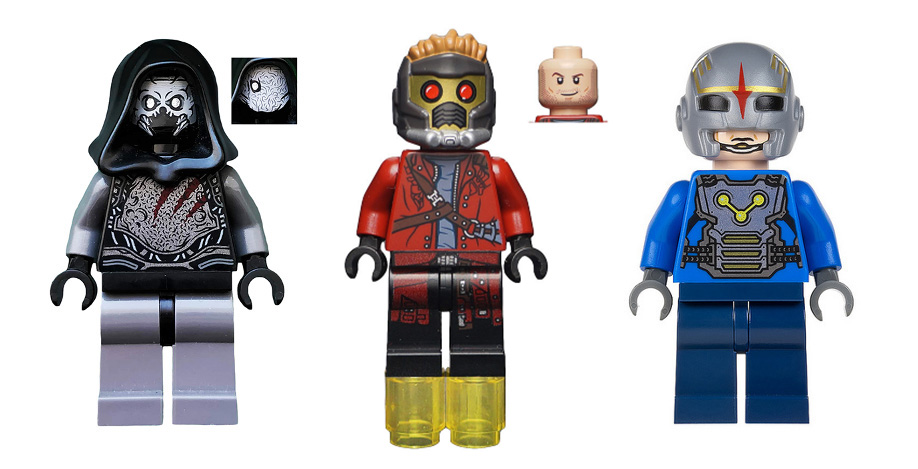 The Star Blaster was a really well-done ship. It was quite size-accurate. The cockpit could be opened to fit one minifigure. Below the main cockpit was a flick-fire missile that could be launched at enemies. The wing flaps on the back of the Star Blaster could be angled on various different angles, as they were attached via hinged joints. The other build included was a Sakaaran ship. It also had a cockpit to fit the Sakaaran guard. It had two flick-fire missiles on each side, and its wings could be angled up and down. 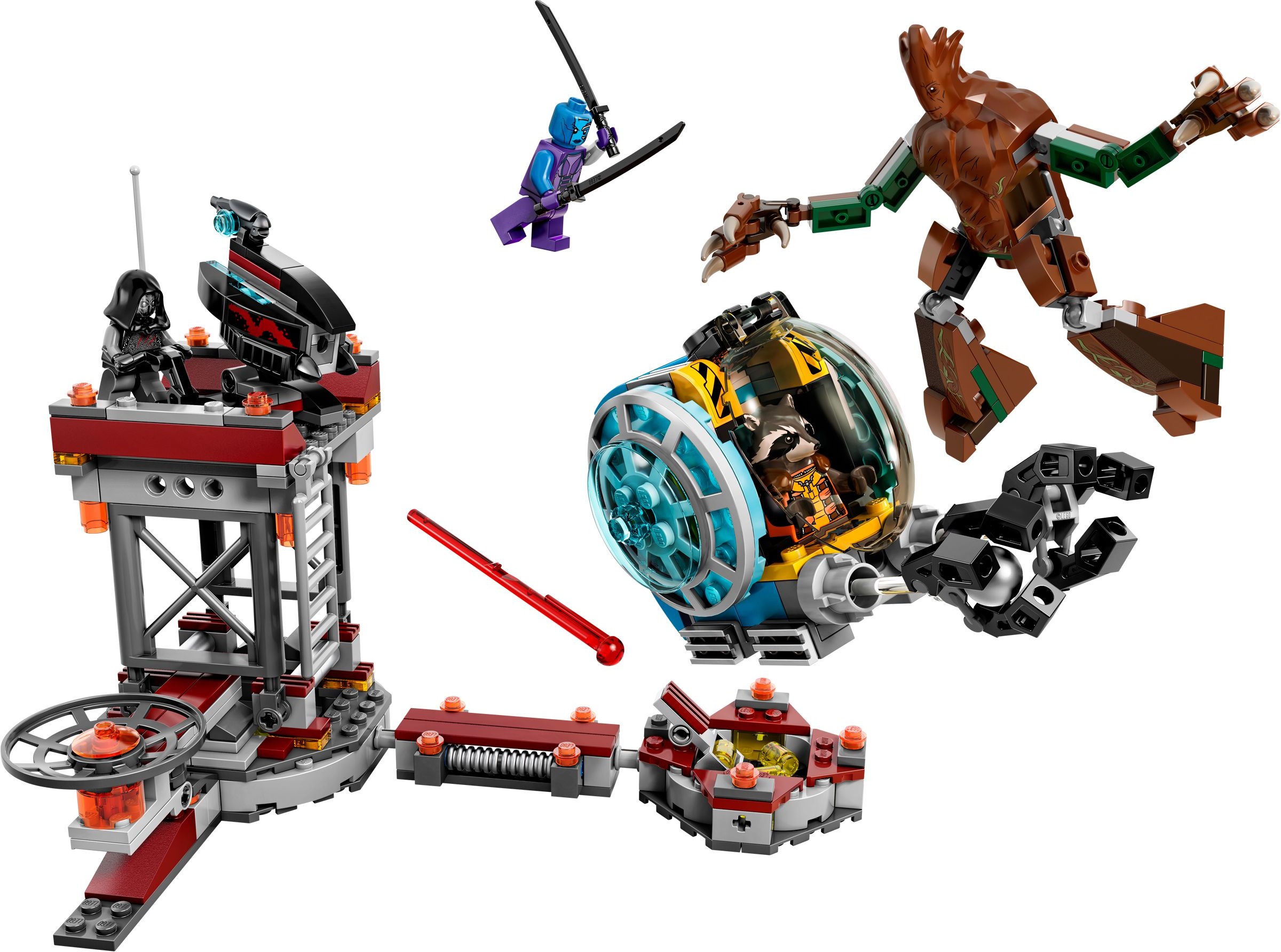 This was apparently one of the most popular LEGO Marvel sets of 2014. Released for $40 USD, I cannot blame fans for loving it. The minifigures, for a start, were so unique. We received Rocket Raccoon in this set for the first time in his prison outfit. He received a completely new head mould and a really detailed torso print. This was such a unique character since we had hardly ever received animal-oriented minifigures in the past. Nebula was also quite a unique blue head print. Her torso was quite simple. She received two katanas as weapons. Finally, we received the same Sakaaran guard from the Starblaster Showdown set.

Instead of creating a bigfig, LEGO decided to go the brick-built route for Groot. They did, however, create a specialised mould for his head and body. However, many other pieces were attached to the mould to create the rest of his limbs. He was quite a posable figure. Both his arms, legs, knees and fingers had a ton of articulation. There were also studs on his hands, which allowed us to attach Rocket’s legs to him.

The rest of the build was directly inspired by the prison escape scene from the movie. The tower had a turret which the Sakaaran could man. It shot off a spring-loaded shooter and could be rotated. Directly in the front was a platform that could launch 1×1 transparent yellow cylinder pieces that could be launched at the tower via a catapult. The other side of the platform had a large dish piece. You could dock the pod at it, which would flip the entire tower over. Speaking of the pod, it could fit one minifigure – Rocket. It had well-built arms, which could hold the orb included in this set. Overall, this was such a fun set.

This $75 USD set was, in my opinion, the best set of 2014. Every single minifigure in this set was on point. We got a similar Star-Lord to the Starblaster Showdown – but this time he came in his full Ravager uniform. He received the same helmet and face print as before. This time, his weapon was brick-built, meant to represent the massive one he uses in the movie. And the way that his torso printing continued onto his legs was just beautiful. Gamora was another well-done figure. Her hairpiece came with a printed pink streak to represent her highlights. Her torso was also done quite amazingly, with all the intricate detailing. She used the exact same leg printing as Star-Lord.

Drax was the second most detailed figure of this set. The tattoo printing that covered his head and torso was just amazing – they even ‘LEGOfied’ it by placing LEGO skulls instead of real ones. The fact that LEGO even continued this tattoo printing onto his arms, showed how much they cared for this theme. Again, LEGO included another Sakaaran to build the army. Finally, my favourite minifigure from this wave was Ronan. He came with a newly moulded headpiece and pauldron piece combined. His head, torso and leg prints were extremely accurate. He came with a built-up staff and the orb.

The iconic Milano was extremely well designed. The cockpit consisted of three seats for all the Guardians included in this set. Next to the seats were two clips to hold minifigure accessories. Below the cockpit was two stud shooters which could be launched at enemies – it could also be angled via being attached to hinges. The whole roof could be lifted off for easy access to the interior. Behind the seats was a fire hydrant and a fourth chair which was positioned in front of a removable stereo. Finally, some of the ship’s winglets could be angled. The Sakaaran ship was just an upgraded version of the one from the Starblaster Showdown. It could fit the Sakaaran figure. It had two spring-loaded shooters. 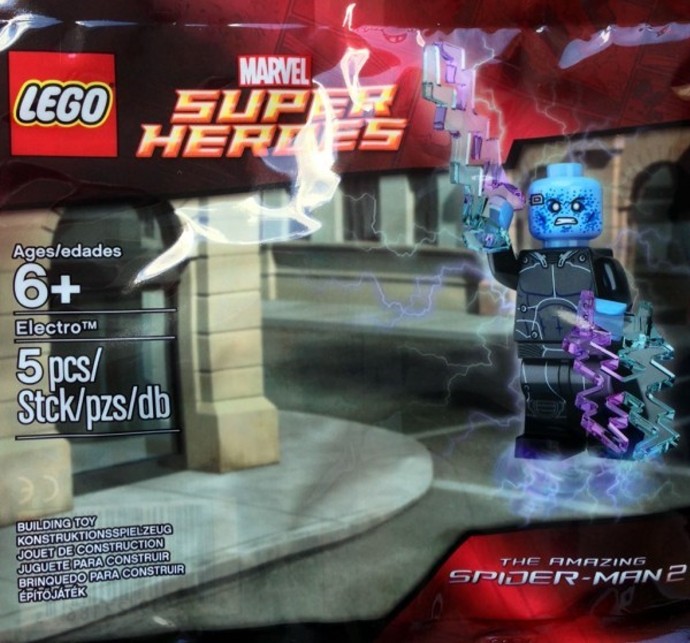 This was quite a nice polybag since we never received any sets from the Amazing Spider-Man 2. My favourite part of this figure was his face print. His torso and legs were also quite a movie accurate. Electro came with two electric pieces as accessories. 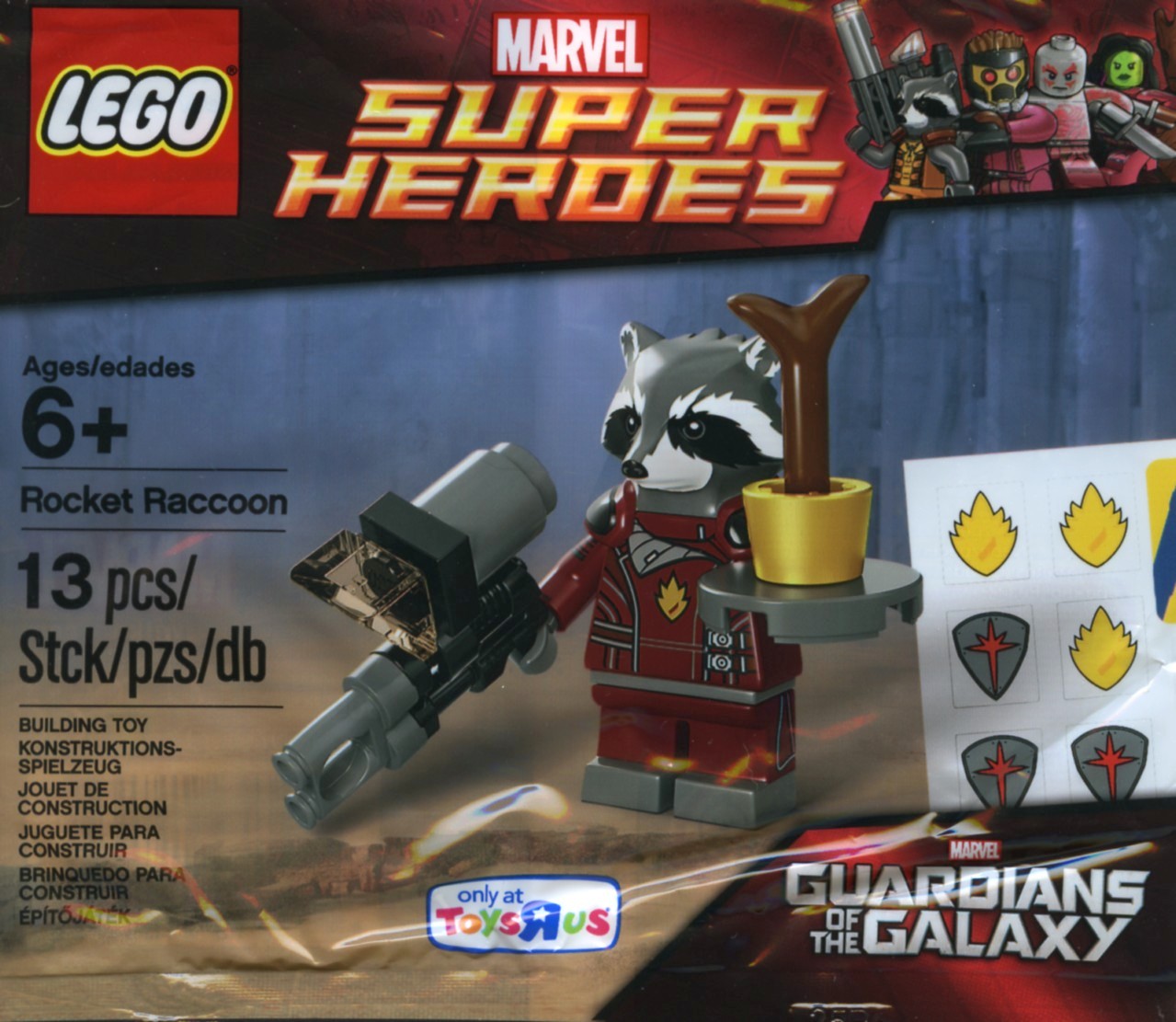 This was such a cool figure! He used the same headpiece – but the pauldron part of this piece was printed in red this time. The torso was so detailed – making this figure look like his appearance was straight out of the comics. He even came with arm printing. His short legs had dark grey printing at the bottom to represent feet, and it even had side leg printing. His accessory was a ridiculously large weapon and a planted pot of Groot’s twigs. Overall, a great polybag to get. 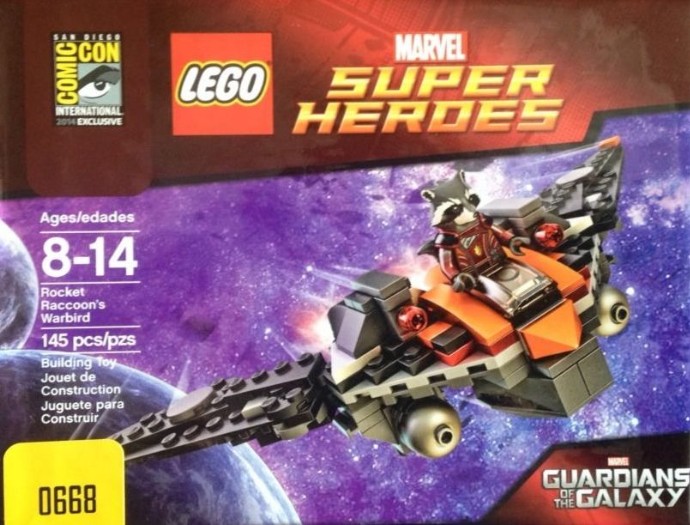 This set came with the exact same Rocket Racoon figure as discussed before, but this time with a large Milano-like ship which he could sit in. 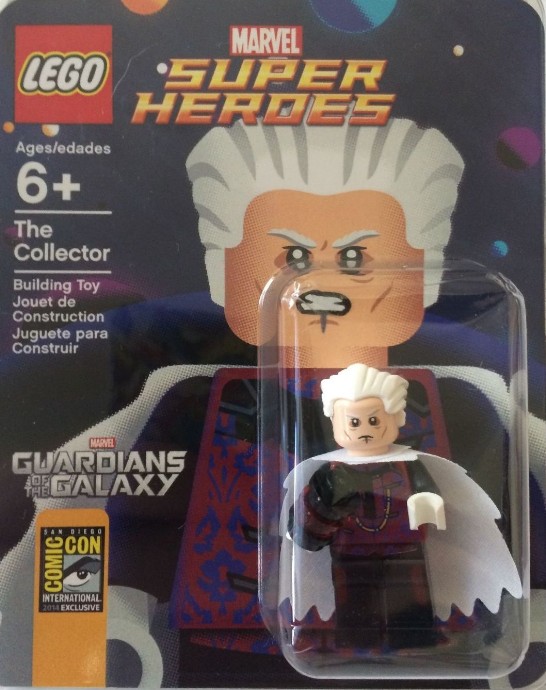 To capitalise on Guardians of the Galaxy, the exclusive SDCC figure for 2014 was the Collector from the movie. Everything was exclusive to this figure, except his hair. His face, torso, legs and the unique cut of his cape all added to the accuracy of this figure. 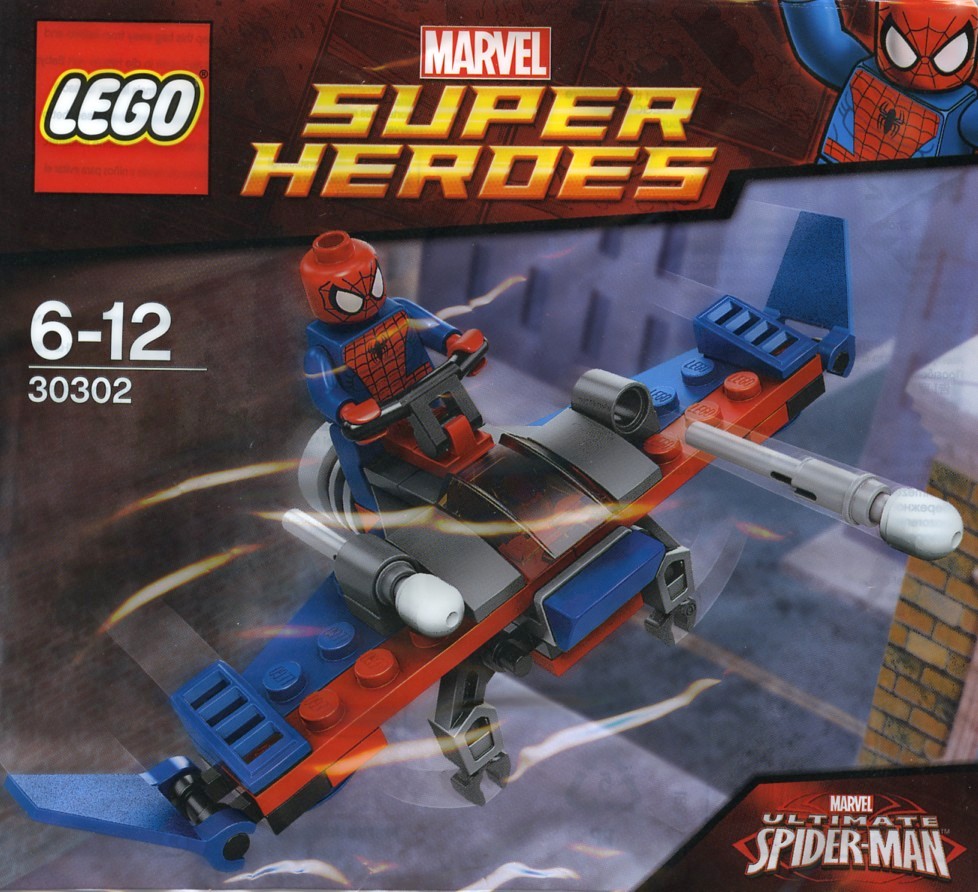 This set literally gave us the generic Ultimate Spider-Man figure as seen a thousand times in this theme. He came with a glider which shot out two flick-fire missiles. 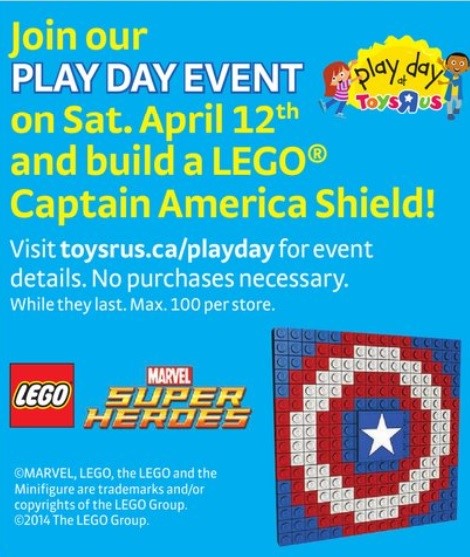 There was an event in 2014 where you could build a Captain America shield in stores and take it home.

And that’s it for re-doing this article a second time! Yay! I guess I have basically familiarised myself with the Guardian sets right now which is cool, but I’m still sad I wasted time redoing it. But whatever. Sometimes we gotta do these types of things. That’s life! Anyways, thank you guys for patiently waiting to see my 2014 LEGO Marvel retrospective! I shall see you guys soon! Peace!