Welcome back to another LEGO DC retrospective. We are flying through the years of this theme, and of course, through the months of this year. It’s already nearly the end of June which is just mind-boggling! Anyways, today we are going to look at 2017. At face value, 2017 was pretty bland for the LEGO DC theme as a whole. We only got 7 sets. LEGO really dropped the ball since 2015. Anyways, I should be able to cover this year in two articles. However, hidden in this lacklustre year was a movie that sparked one of the best, and biggest waves of DC to date. But, all of that will be revealed in the end of part 2. So, let’s jump into this!

This was a beautiful, yet overpriced set. At first glance, you would think that this would’ve been $15 USD. I mean, four figures and a small build was something you would get in a $15 USD set. This could be derived from the fact that similar sets such as the ‘Iron Man vs Ultron’ and the ‘Avengers Outrider Dropship Attack’ were released. And this set did look like it was meant to be $15 USD. So it came to my surprise when I found out that it was actually $20 USD.

Aquaman’s first DCEU appearance was in this set. LEGO made a completely new hairpiece to match his style in the movie, with white streaks as a nice addition. Both his front and back faceprint were really unique from Aquaman figures in the past – with brown hair colour.  Both his torso and legs matched the armour he wore briefly in the theatrical version and mainly the Snyder version of the film. His trident was moulded in gun metal grey and had a lightsaber hilt attached at the bottom. He received a power blast piece to shoot at the Parademon.

Speaking of the Parademon, it was a very detailed figure. Although we didn’t see any bright yellow versions of this creature in the movie, it was a nice inclusion to get. The face print was phenomenal, and this detailing continued onto the beautifully designed torso and legs. But LEGO didn’t stop there. This detailing was further carried onto the wings. LEGO included two of each wing variants in the set – totaling four. 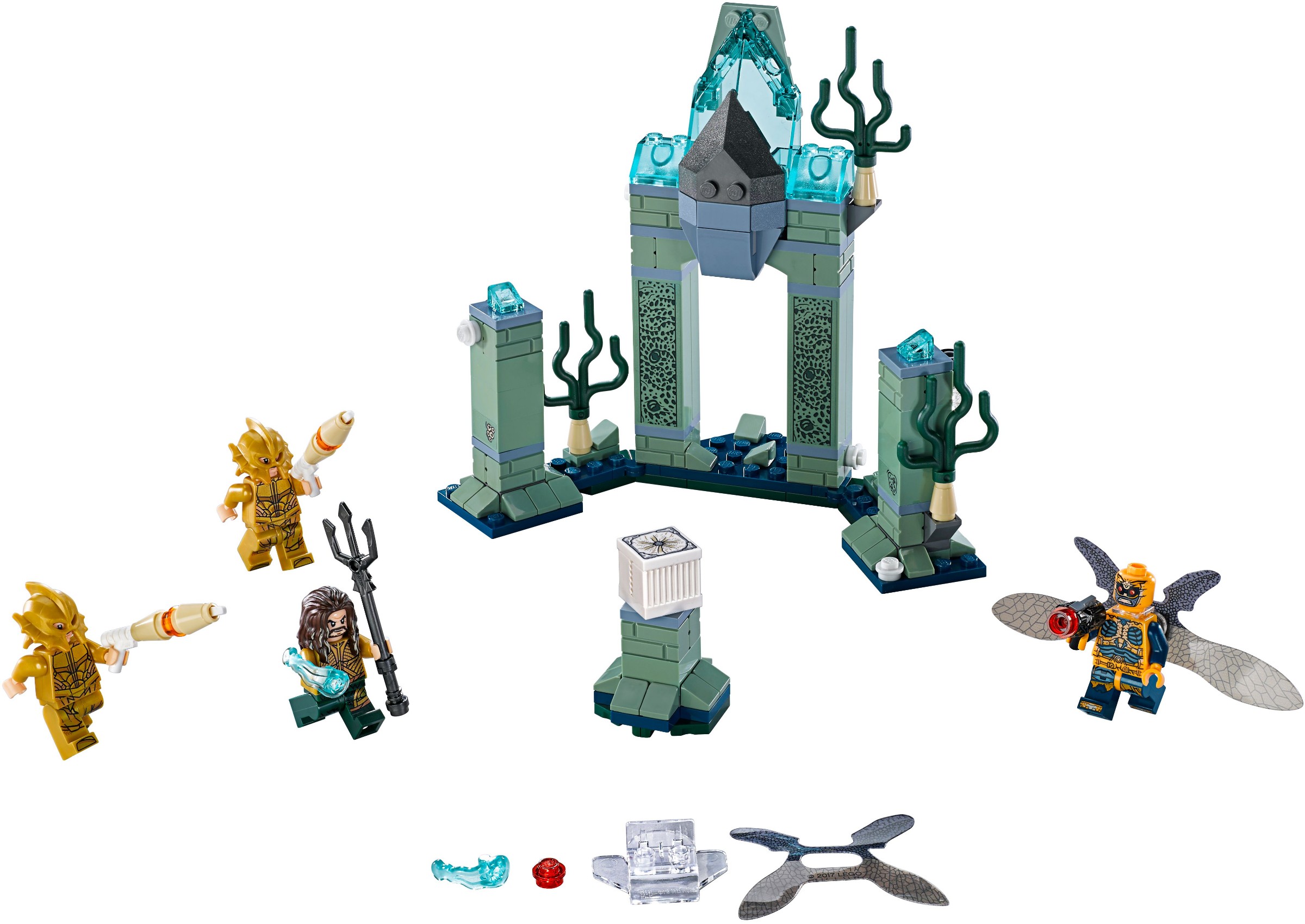 The final two figures of the set were two Atlanteans. They used a very accurately moulded headpiece in gold. Both of them had identical torso and leg prints too, although they had unique face printing. Can I just take a minute to appreciate the amount of effort that the designers put into the minifigures? All four of them had leg printing! Leg printing! That’s a rarity in superhero sets today. I love the passion they put into the minifigures – making the Justice League wave a sub-theme to remember for its consistently amazing figures!

So the build of the set was amazing too! How can there be this many good things about a set! It was a small diorama of a small section of Atlantis. I loved the use of the sand blue pieces used to create the pillars of the scene. The stickers used, along with the seaweed gave this set life. The top part of the main structure could be knocked down via a super jumper that was included in the set. Finally, the middle consisted of a display for the Mother Box build included in this set. Overall, this was actually a very solid set and something that the designers should be very proud of.

This was also actually a very solid $50 USD set. Again, both the minifigures and the builds were remarkable. LEGO gave us a completely new Batman to match his updated DCEU appearance. He came with a new faceprint – this time with stubble on his face. His torso was the same as his 2016 appearance, although his legs got printing and dual moulded treatment this time around. He was equipped with a Batarang and a Grappling Hook.

The Flash was another beautiful figure. I actually recently bought him off the Firestar Toys website. He definitely is my favourite figure of this wave. He had near-perfect accuracy to his appearance in the film. A completely new helmet piece was created to replicate the design of the movie prop. It had the lightning bold engraved onto the helmet. He received two very cool face prints, and a near-identical torso and leg print. I cannot stop gushing over this figure. Really. This is one of my all-time favourite DC figures of all time. He was so damn cool! And to top him off, LEGO gave him two power blast pieces to shoot at the Parademons included in this set.

Again, speaking of Parademons, we got a new variant included in this set. We didn’t see any green Parademons either in the film. The face print was phenomenal. Every single line and dot detailing on the figure just emphasised its look. The beautiful light and dark green colouring complemented each other so well. The torso had similar printing to the yellow version and was equally as detailed, but this time mainly consisted of green. And of course, LEGO carried this effort onto their legs, making these figures very collectable. Finally, both Parademons included four wing pieces each, and a stud shooter as a weapon.

So the Knightcrawler. It was a unique build, to say the least, and it didn’t have the bat look that Batman usually goes for. But it was still a very cool build, which matched its film appearance quite closely. Each of its legs consisted of two wheels at the bottom, and were on massive hinge joints, and therefore could replicate the movement of the real thing – well the fictional thing. The cockpit was designed quite cleverly, as it used quite a unique piece for the windscreen. Batman could be placed inside. Finally, the designers equipped the Knightcrawler with dual six stud shooters, which could rapid-fire 12 studs overall at enemies. This was actually a surprisingly good set, as LEGO put their hard work into designing spectacular minifigures and a very accurate, yet good-looking build. Oh yeah, and the set came with a second Mother Box. 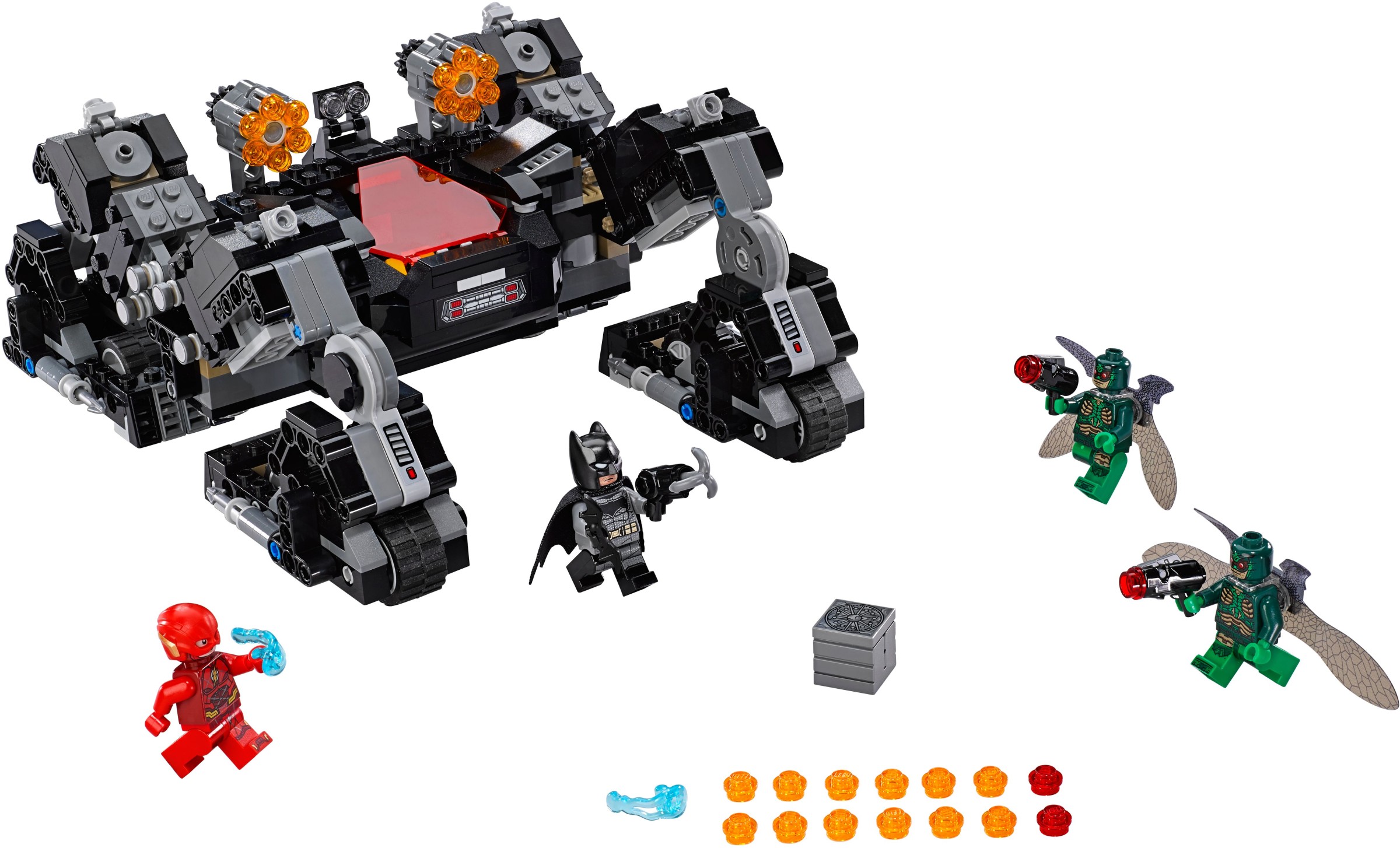 Once I started reviewing the battle of Atlantis, I realised that I cannot look through all three 2017 LEGO DC Justice League sets in this one article. Why? Well, maybe it’s because LEGO actually did a really fabulous job on this wave! So far, every single minifigure we received got leg printing! Do you know the chances of that occurring in any Marvel or DC wave today? Do you? Today, we are lucky if even half the figures in a superhero wave get leg printing, so to see the effort put into the minifigures – it’s truly awe-inspiring. And the builds too were actually solid – they weren’t just garbage throw-ins that LEGO loves to do. They had thought and proper design choices put into them, and I appreciate that very much.

Since I spent this whole article, only being able to discuss two of the three sets, I guess we may have to push our ‘big reveal’ from the start of this article back by one week. As always, thank you for sticking through till the end, and I shall see you guys next time! Peace!