Welcome back to the second part of my 2017 LEGO DC retrospective. In Part 1, we discussed the sets based on the movie, Justice League. I was supposed to cover all three sets, but my smart mouth decided to ramble on about the minifigures and the builds. Back then, I thought these sets were cool. But over the years, I’ve found a deeper appreciation for the three Justice League sets – especially with the recent release of Justice League, the Snyder Cut. With that cut of the movie released, I have found myself craving the minifigures from this line. Can you blame me?

Every single minifigure that we have discussed over the part 2 sets came with leg printing. Yes, I’m going to keep gushing over the effort that the designers put into these sets. Every single figure in those past 2 sets hit hard. And the builds too – they were actually above average, as opposed to the typical superhero sets.

Anyways, in this article, we will look at the biggest set of the wave – the Flying Fox. So initially, I didn’t pay too much attention to this set. It was probably because there was no way I could afford it back then. I also thought the builds were quite ugly. But as time went on, this $130 USD set grew on me, to the point where I am willing to actually buy it now. So let us hop into this review!

Let me start off by saying, the Batman in this set was a beauty. He received the short cowl that is typical with most Batman figures. His face print was actually exclusive – it was different from the one in the Knightcrawler. Yes. Even though both had stubble printing on their faces, this version used a gunmetal grey printed band for the back of the eye holes as opposed to the white printed one in the Knightcrawler set. His torso print was completely new, and I especially loved the gold accents. This phenomenal printing carried over onto the hip, and the legs – which were dual moulded too by the way. This was a perfect Batman figure – that LEGO could make realistically in a retail set. To finish him off, he received a black Batarang and a grappling gun. 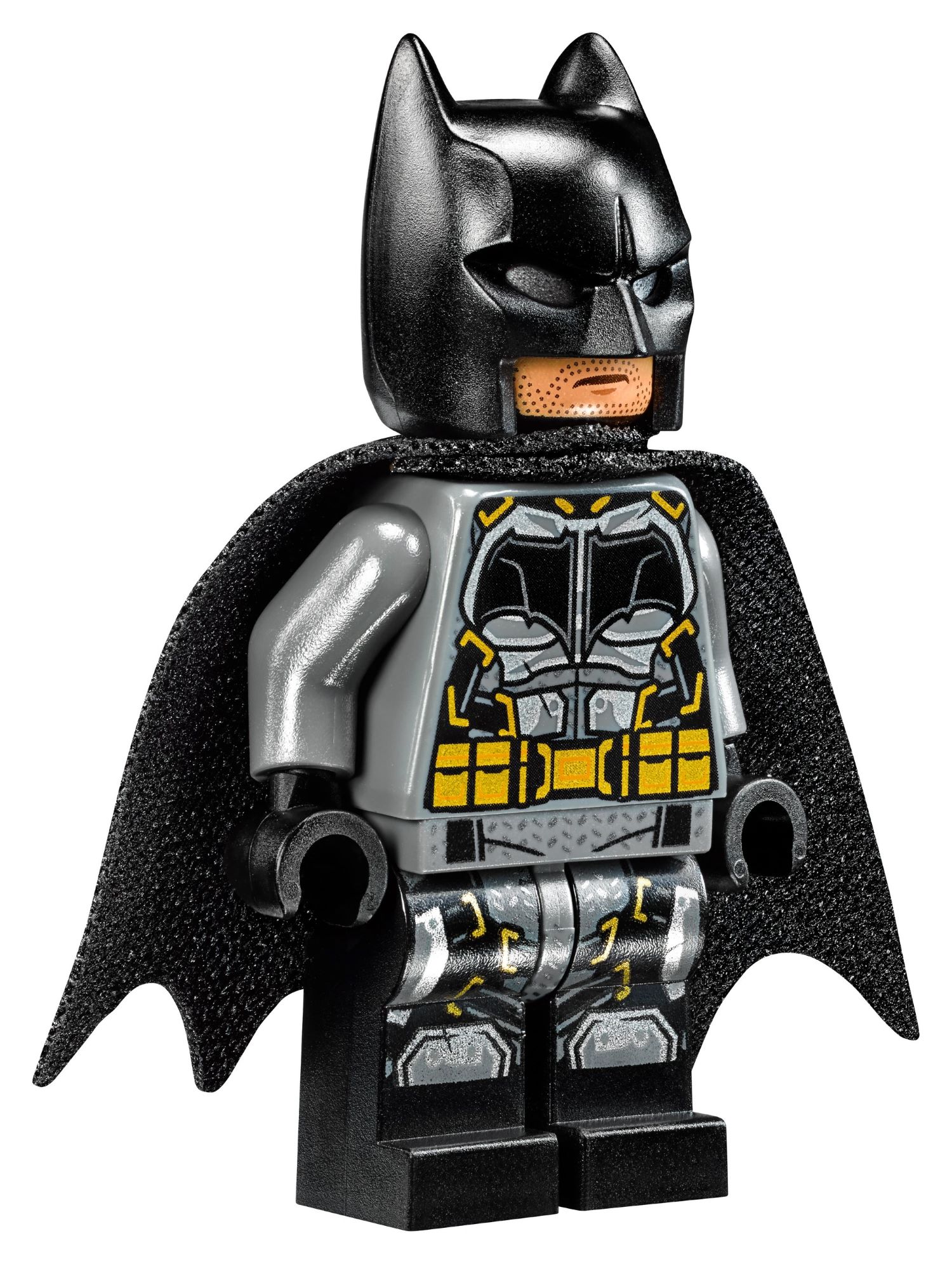 The next figure across was Superman. He was an exact carbon copy of his 2016 Batman vs Superman version. He received the same crew cut hairpiece as that figure, and a really great torso and face print. However, I was disappointed that LEGO didn’t give him dual moulded boots. His 2016 counterpart from the Batman vs Superman Batwing set came with red and blue dual moulded legs. The fact that this figure was too in this expensive set, made it very disappointing that he didn’t receive the treatment. Every single figure in the Justice League line had some sort of detailing on their legs, whether it would be printing or dual moulded boots. This was the only figure to break the trend in this wave, which was very disappointing. 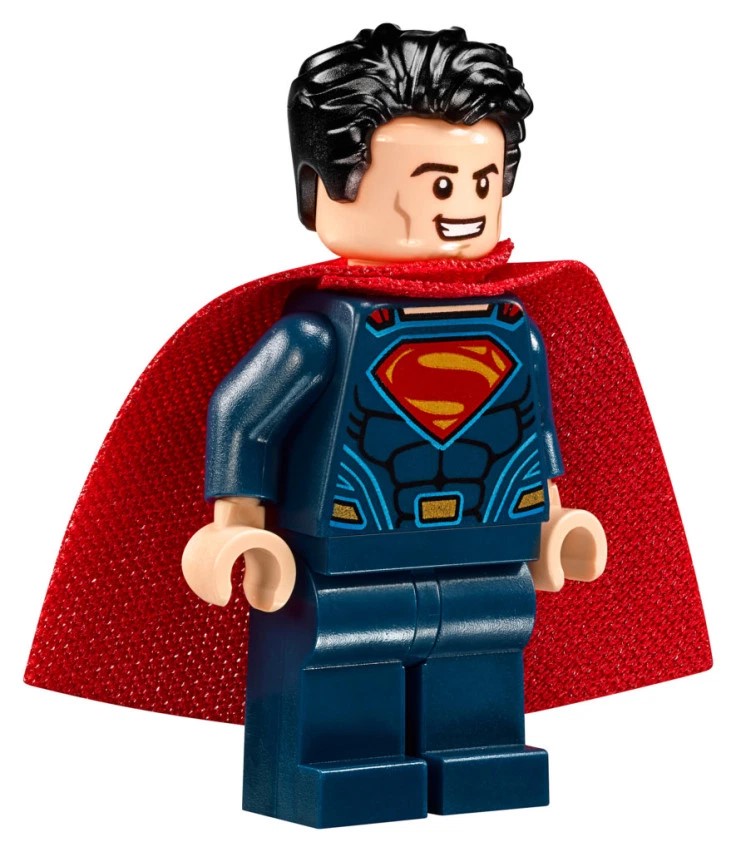 The third figure in this set was Wonder Woman. Like Superman, she was a re-release from her 2016 Batman vs Superman counterpart. The hairpiece was perfect, and she had a beautiful dual-sided facial expression. Again, the detailing on her torso was so accurate to her film appearance, and it carried onto her hips, and finally her legs. Not to mention that she came with dual moulded legs. Oh yeah. Did I mention that the printing carried onto the side of her legs, and even her arms? Yeah. LEGO went all out with this figure in 2016, and not many complained that she was released the next year as she had a similar appearance in Justice League, and therefore didn’t require a new figure. 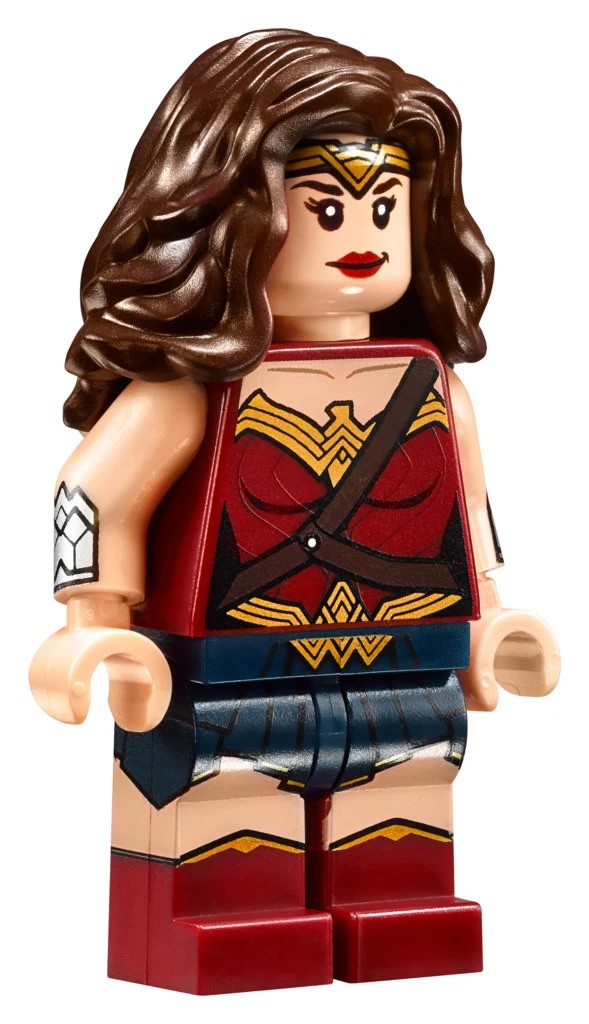 And for our final hero in this set – Cyborg. Hands down, this has to be the best version of this figure that LEGO has ever created to date. Yes. He was that brilliant. He used the same hearpiece that previous Cyborg figures had. There was not much of a need to change it, so LEGO made an obvious choice. The moulded piece was actually very cool, with half of it being his hair, and the other half – robot. His face print was pretty average. 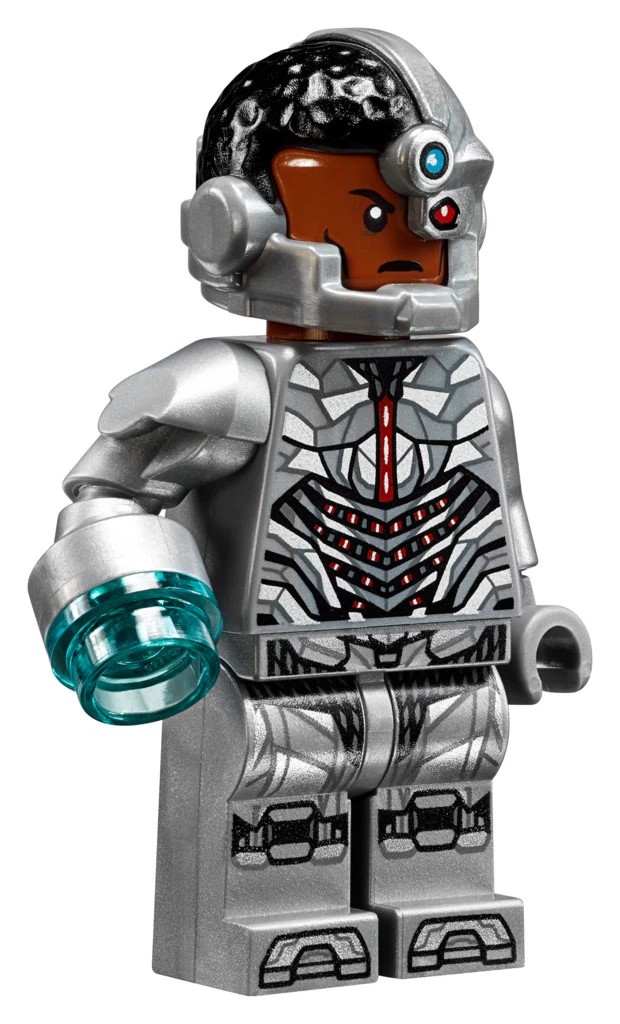 However, this figure really picks up on his torso and legs. His torso was so amazing. Words cannot describe how much I liked the printing. It was so intricate, and it continued over onto his waist and legs. One of the coolest parts of the figure was his specially designed arm piece, which could fit a stud, allowing you to attach a stud shooter. Overall, this figure was a masterpiece, and a driving force for me to get this set.

The final two figures were Parademons – both of which were repeats from the previous two discussed Justice League sets. Again, the yellow one came in the Battle of Atlantis set. The face print was phenomenal, and this detailing continued onto the beautifully designed torso and legs. But LEGO didn’t stop there. This detailing was further carried onto the wings. LEGO had included two of each wing variants in the set – totaling four. 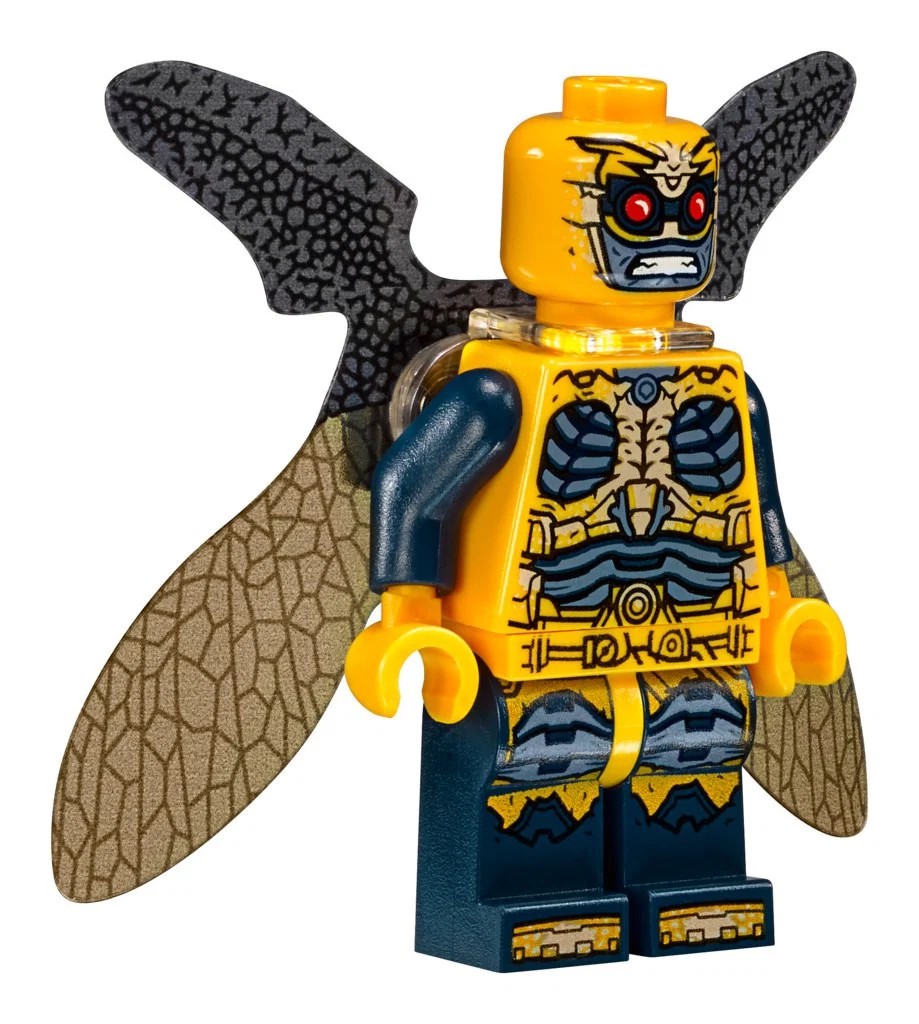 And the green one was the version released in the Knightcrawler Tunnel Attack set. The face print was phenomenal as stated before. Every single line and dot detailing on the figure just emphasised its look. The beautiful light and dark green colouring complemented each other so well. The torso had similar printing to the yellow version and was equally as detailed, but this time mainly consisted of green. And of course, LEGO carried this effort onto their legs, making these figures very collectable. Finally, both Parademons included four wing pieces each, and a stud shooter as a weapon. 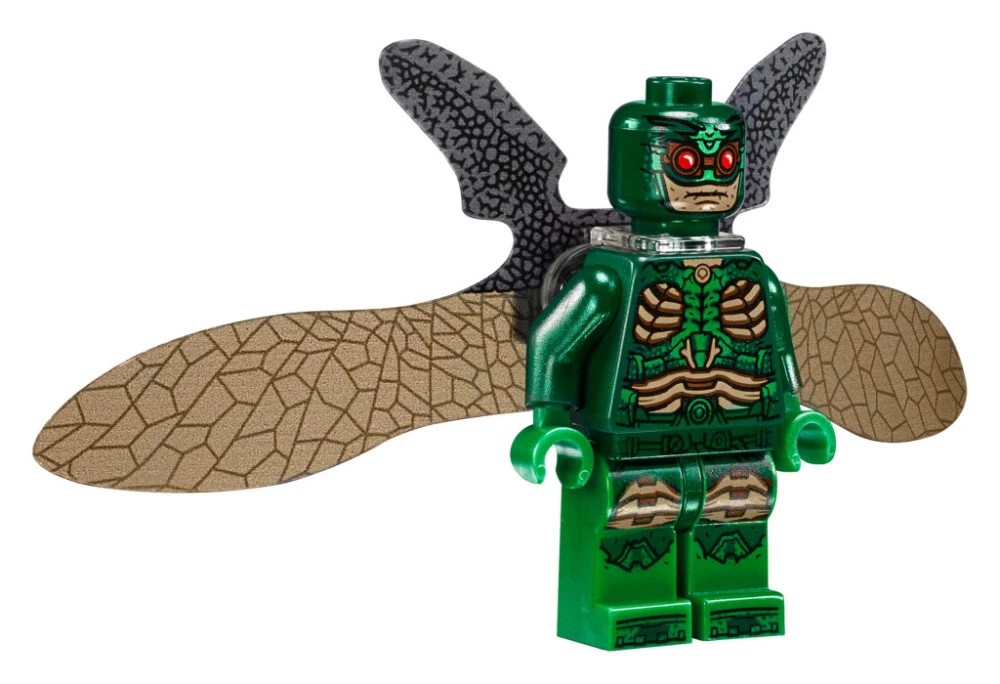 Now for the set. The first build was a brick-built figure of Steppenwolf. The moulded head was terrific – especially with the horns and his chin. The armour printing on the torso was also great, but besides that, the figure was quite underwhelming. Although I liked how it could be easily posed via its ball joints, the build just looked very blocky and messy. I believe that the designers should’ve spent more time to smoothen out the build. 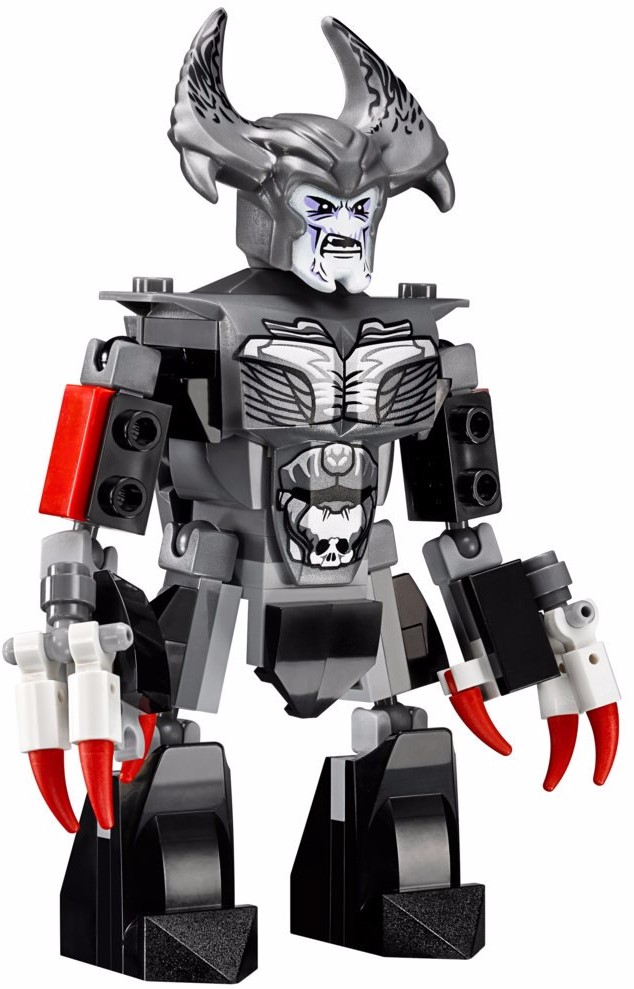 The other medium-sized build of the set was the upgraded Batmobile. It had the same basic design as the 2016 one but was buffed up with more weapons and armour. It had two stud shooters on its hood and one next to the main turret in the middle. The driver’s windshield could be lifted up to place Batman. It was a cool build. 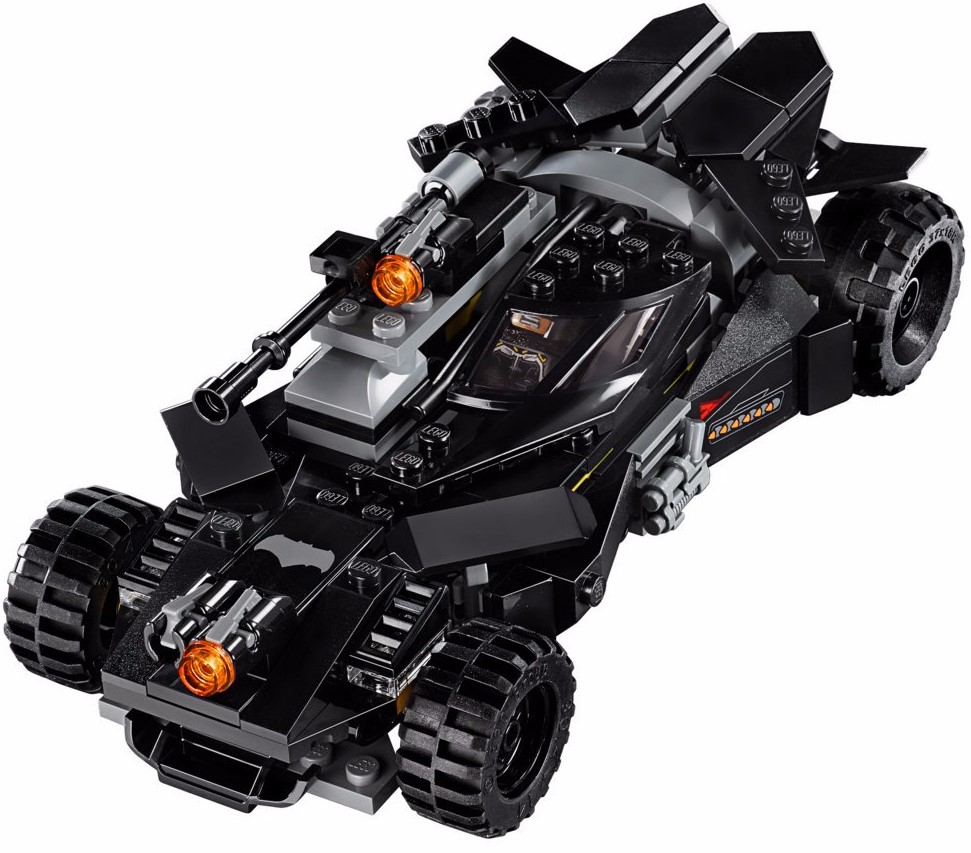 Finally – the Flying Fox. You’d think this thing would be full of interior space and details right? Nope. It was just hollow. The whole mid-section was designed to transport the Batmobile. Once driven inside, there were simple Technic mechanisms to lock it into place so that the vehicle wouldn’t fall during flight. There were a few panels with stickers on the inside though. Under its main wings were two hidden spring-loaded shooters, and on top – two stud shooters. Finally, the cockpit could be opened up to fit two minifigures. It was quite disappointing that there wasn’t an interior space for the whole Justice League, but it could easily be modified to hold figures. Overall, it was a cool build, but it wasn’t anything to ride home about. Oh yeah, the set came with the third Mother Box in red. 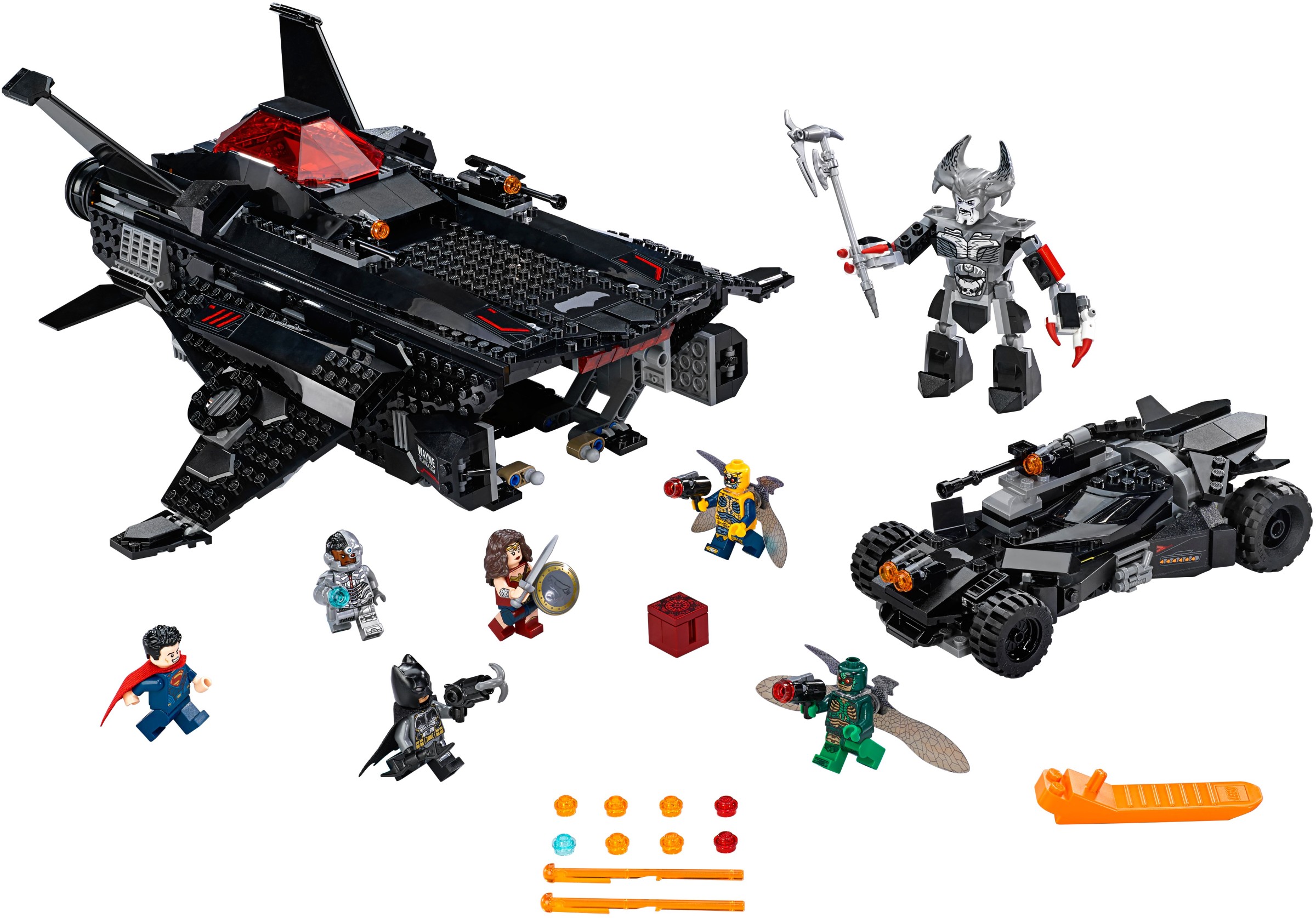 And that’s it for this week’s article! I hope you guys enjoyed! Now that I looked back at the set, I’m feeling conflicted. At the start of the article, it was a definite purchase for me. But now as I peeled back the layers, what I really wanted was the exclusive Cyborg and Batman. Wonder Woman and the green Parademon would be a bonus, as I don’t own either. And even though the builds aren’t bad, I don’t really need them. So I may just buy the figures online and leave the rest. But I guess we shall see what happens. I’m feeling quite sleepy so I’m gonna go to bed now. Take care and goodnight!

Full set image from Brickset, other images from Vaderfan2187’s Blog.

How the LEGO Company Almost Went Bankrupt: A History