And we are back for the third and final part of our 2018 LEGO DC retrospective! I feel like this year has basically been the year of the Arrowverse in LEGO form. For those who don’t know, the Arrowverse is the connected universe between the shows, The Flash, Arrow, Legends of Tomorrow, Supergirl, Black Lightning, and Batwoman. As we saw, in our two previous parts, we got heavy hitters from the universe, including Supergirl, FIRESTORM, Flash, Killer Frost, and the Reverse Flash. And although the next few sets that we will discuss weren’t based on the Arrowverse, it was cool to receive two more main characters, as will be discussed when we come across them. So with that aside, let’s get into it.

This set was based on one of my favourite Batman story arcs, The Court of Owls. Retailing for $20 USD, most people would’ve bought this for the minifigures – and I don’t blame them. The Batman in this set was finally different from the typical version we received throughout the year. He looked a lot like his 2016 Batman vs Superman counterpart. This minifigure was based on the Thrasher suit from the Court of Owls storyline. Like the actual suit, the figure was basically fully painted in gunmetal grey. He had the iconic red eyes of the suit. They placed an armour piece on his chest to bulk him up so that he would look similar to the suit. The intricate printing was very accurate in its comic appearance. He was such a cool figure. 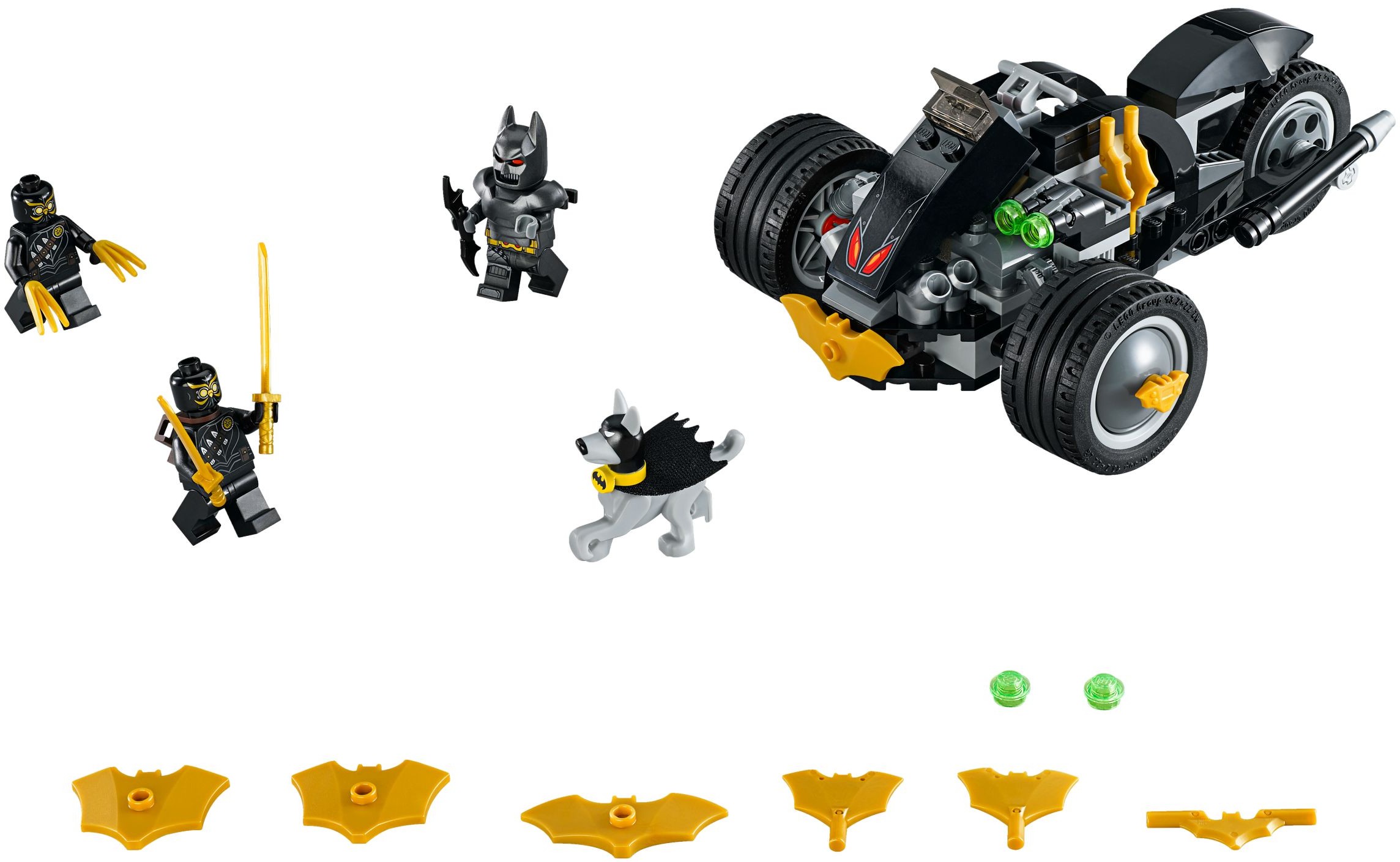 The second figure was Ace the Bat-Hound. The moulding of the dog was very good, and I especially love the black printing over his eyes, and his cape and collar. The Talons were amazing figures to finally get in LEGO form. They dawned their iconic appearance with the carefully printed head and torso. Both were however technically different. One of them came with two golden claws, and the other one came with two golden swords and a sheath. I regret missing this set, just for the minifigures.

Batman’s trike followed the trend of a bike in a $20 USD superhero set. There was a seating space for Batman. The trike had two stud-shooters. It also has the ability to roll around. We also received a Batman accessory pack to attack the Trike. Overall, this set was a must-by just for the minifigures.

Retailing for $30 USD, this set came at the perfect time. During this time, the new Batwoman TV show that was connected to the Arrowverse was fully in production, and now, fans could get this character in LEGO form before she became a household name. LEGO created a new mould for her helmet, with her hair moulded in. The mould was so well done. Under that was a dual-sided expression for Batwoman, which looked very pale. She received a simple, yet accurate torso print. As I said in my 2019 retrospective article, this torso would be perfect for a Batman Beyond custom. I do however wish that they gave her leg printing to finish the figure off – but then again, it wouldn’t be necessary for this figure since Batwoman doesn’t have much noticeable detailing on her legs.

The Batman in this set was somewhat bland. He received the same helmet mould the typical Batman figure has always received – along with the average dual-sided face printing underneath. He came with the soft, fabric cape in black, and a very simple torso print. If there’s one DC figure that needs constant dual moulded legs – it is Batman. Every Batman figure would instantly be near-perfect with this one change. So it’s sad that LEGO has nearly always cheapened out in this aspect. Oh yeah, he came with a Batarang as an accessory. 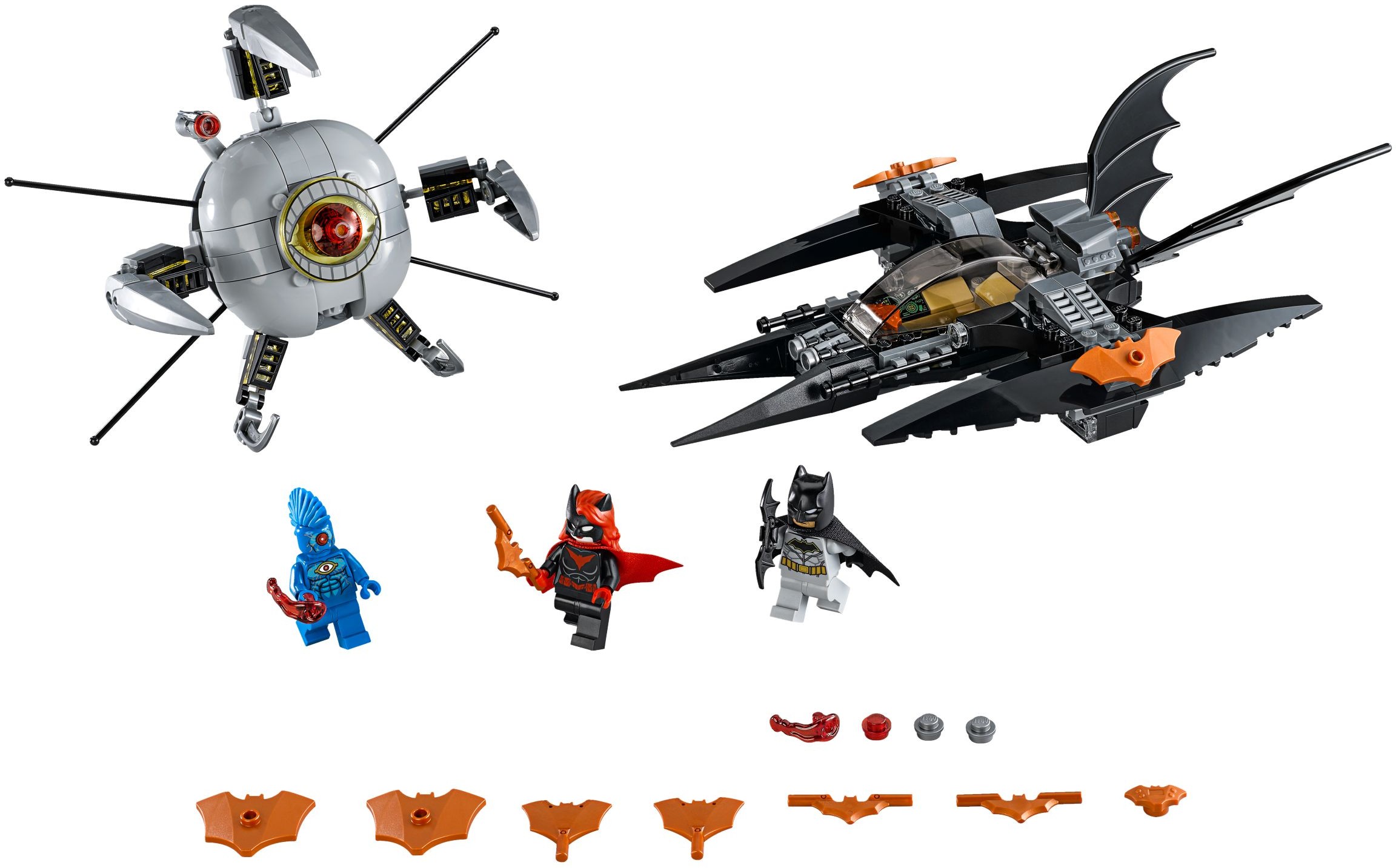 Brother Eye was another exclusive character in this set. He is such an obscure character, so I’m so glad the designers decided to make this android the villain of this set. Brother Eye came with the mohawk piece – this time coloured in light blue. The face print for this character was again, done so well. His torso was also quite cool and he didn’t get any legs printing. I do wish LEGO added more purple to the entirety of the figure as it would look more accurate to the character from the comics. Brother Eye was equipped with two power blast pieces in red that could be shot out at enemies.

There were two builds in this set. Brother Eye’s eye was a unique build. Its main play feature involved a light brick inside the build. You would push down at the bottom of the build which lit up the eye. Each of its claws could be rotated, as they were on ball joints. And finally, there was a stud shooter as a defense mechanism.

The Batwing in this set was trash. Well, it wasn’t terrible – it just wasn’t good. It had two stud shooters at the front, and an opening cockpit to seat a minifigure. But yeah, there wasn’t much to it.

Following the release of the 2016 Batman vs Superman wave, we got this gem. Based on the Knightmare scene in the previously stated film, this set gave us a minifigure we didn’t even know we wanted. The Batman was drawn from the iconic Knightmare scene in the film. Although his head and helmet weren’t new, we got a beautifully designed torso with even sidearm printing! In addition, LEGO printed the figure with dual moulded legs and printing. This was such a beautiful figure. Finally, he received a built-up gun. 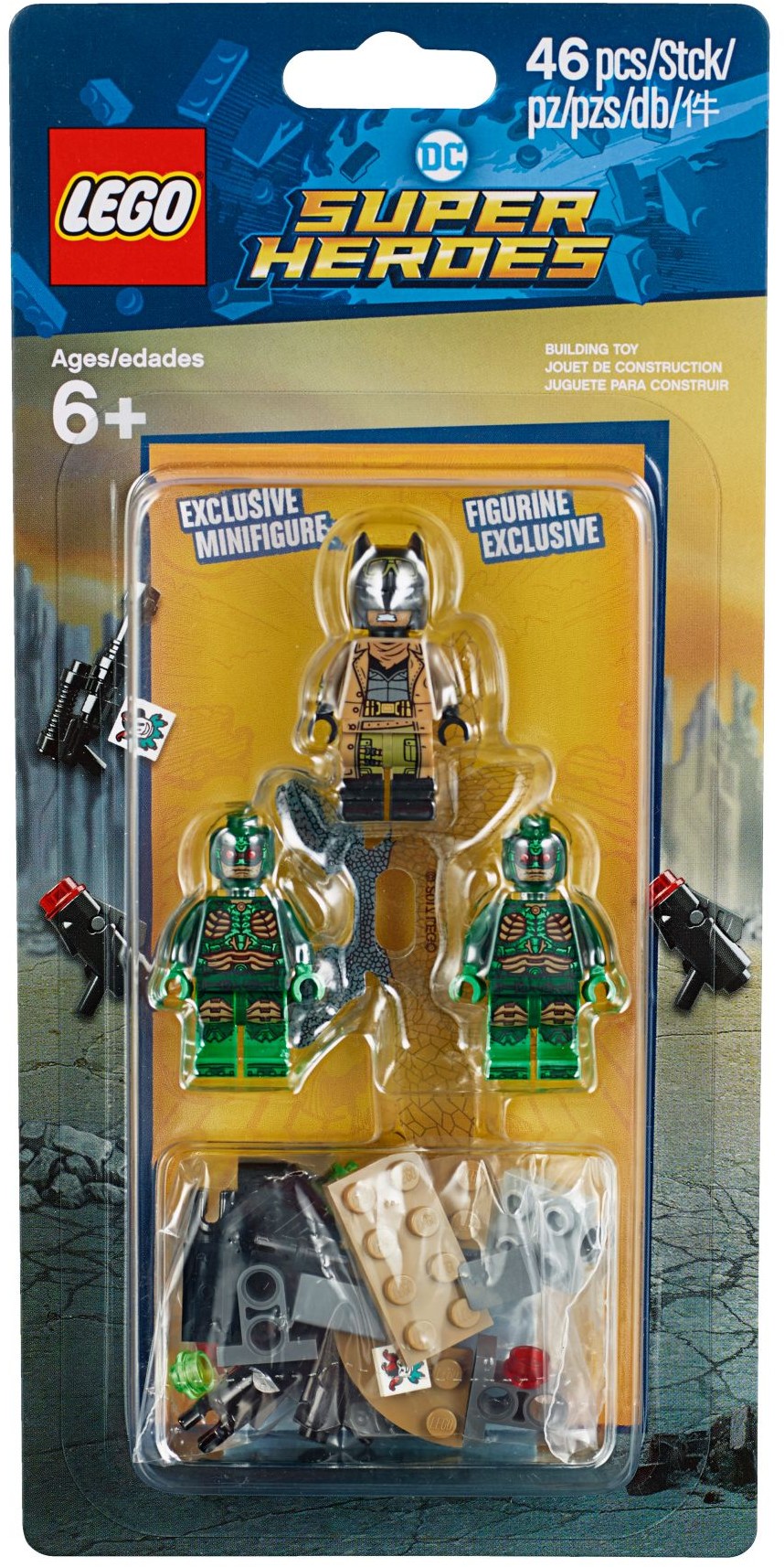 Included in this set were two Parademons. Every single line and dot detailing on the figures just emphasised their look. The beautiful light and dark green colouring complemented each other so well. The torso had similar printing to the yellow version and was equally as detailed, but this time mainly consisted of green. And of course, LEGO carried this effort onto their legs, making these figures very collectable. Finally, both Parademons included a wing piece and a stud shooter as a weapon.

The build-in this accessory pack was a mini turret, which could be angled up and down, and could shoot at enemies as there were two stud shooters.

The LEGO DC SDCC set of 2018 was this cool one. The Aquaman figure was quite bland, with an average-looking head and torso. They should’ve carried the net printing onto his legs to give him more detail. 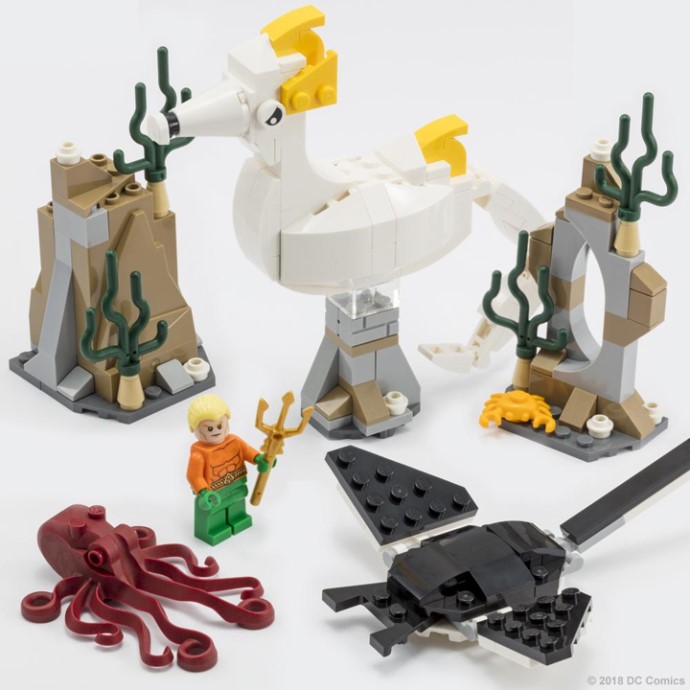 The builds were nothing special. There were two sea-animal builds – a manta ray, and Aquaman’s Seahorse, Storm, and a moulded octopus. The other three builds were rock formations in the ocean which looked pretty good. 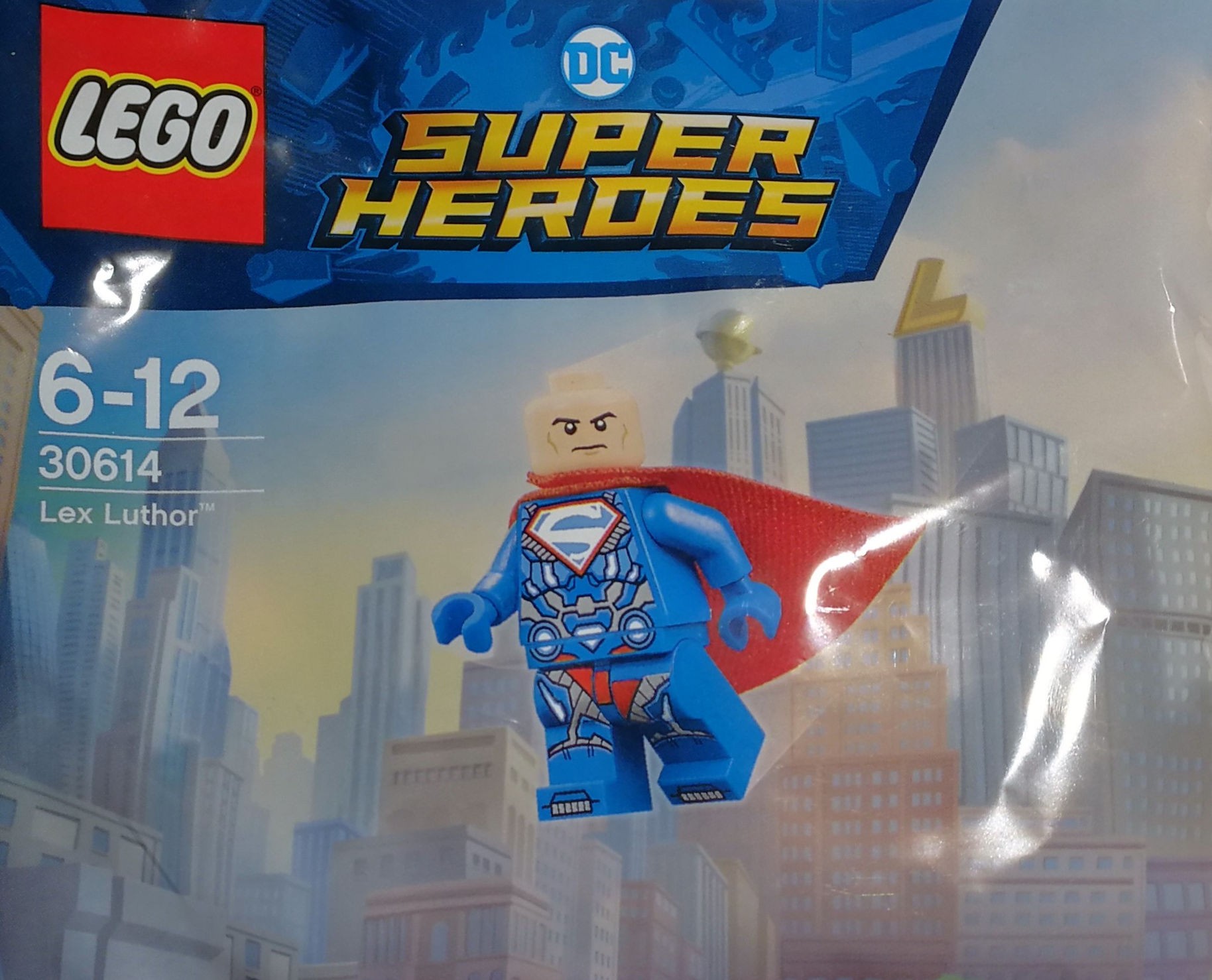 Speaking of figures I really wanted – the Jessica Cruz Green Lantern was highly wanted on my DC list of figures. Her face printing was phenomenal, along with her unique torso and legs. She was just such a cool figure in general, and I hope to own her soon! 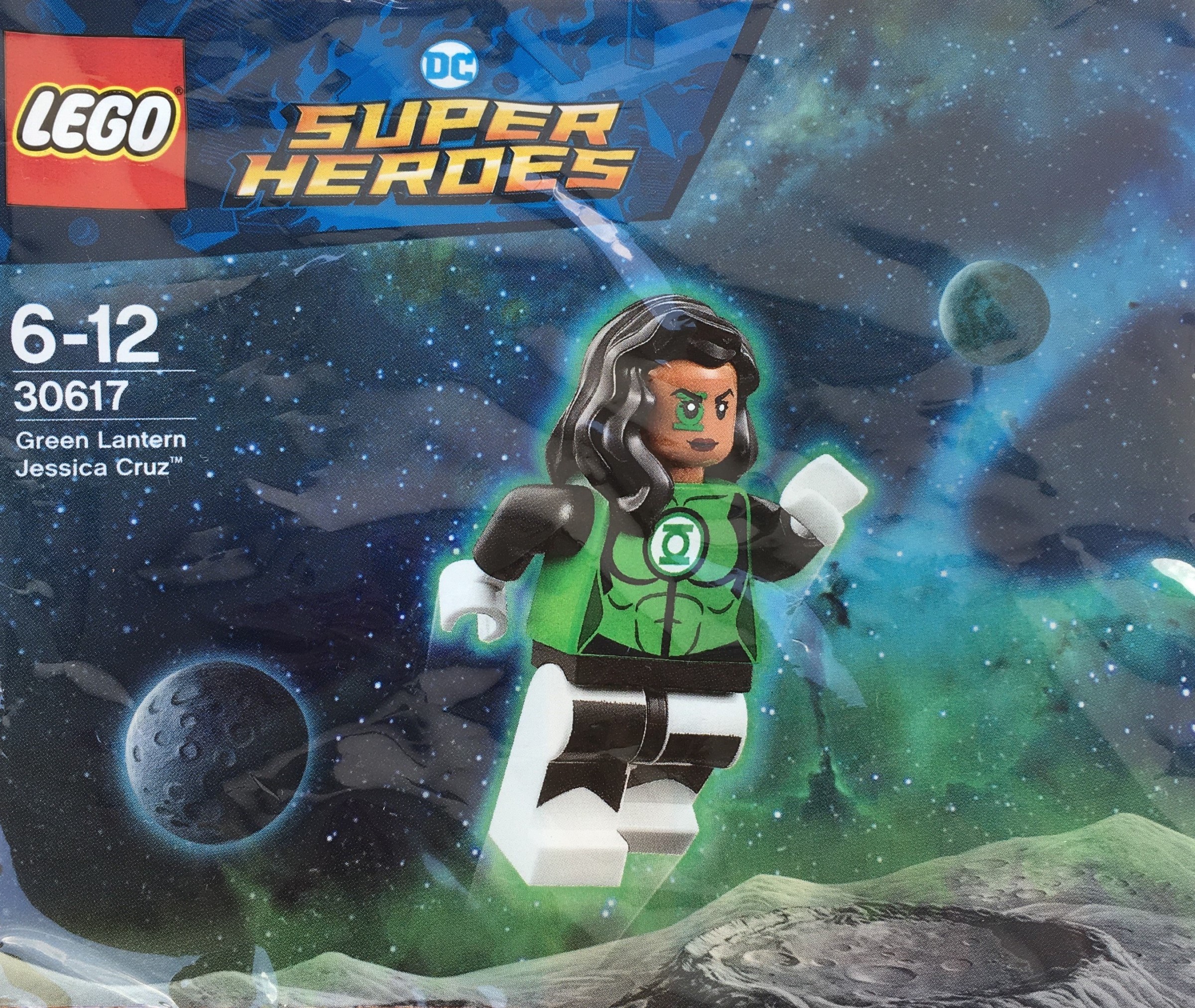 The final minifigure we will be discussing in this article is Black Lightning based on his TV show appearance from the Arrowverse. He came with curly hair and a new face print. Again, both his torso and legs were exclusively printed for this character. It’s so sad LEGO has these SDCC figures – because I yearn to own these exclusive, and highly-desired characters in LEGO form. 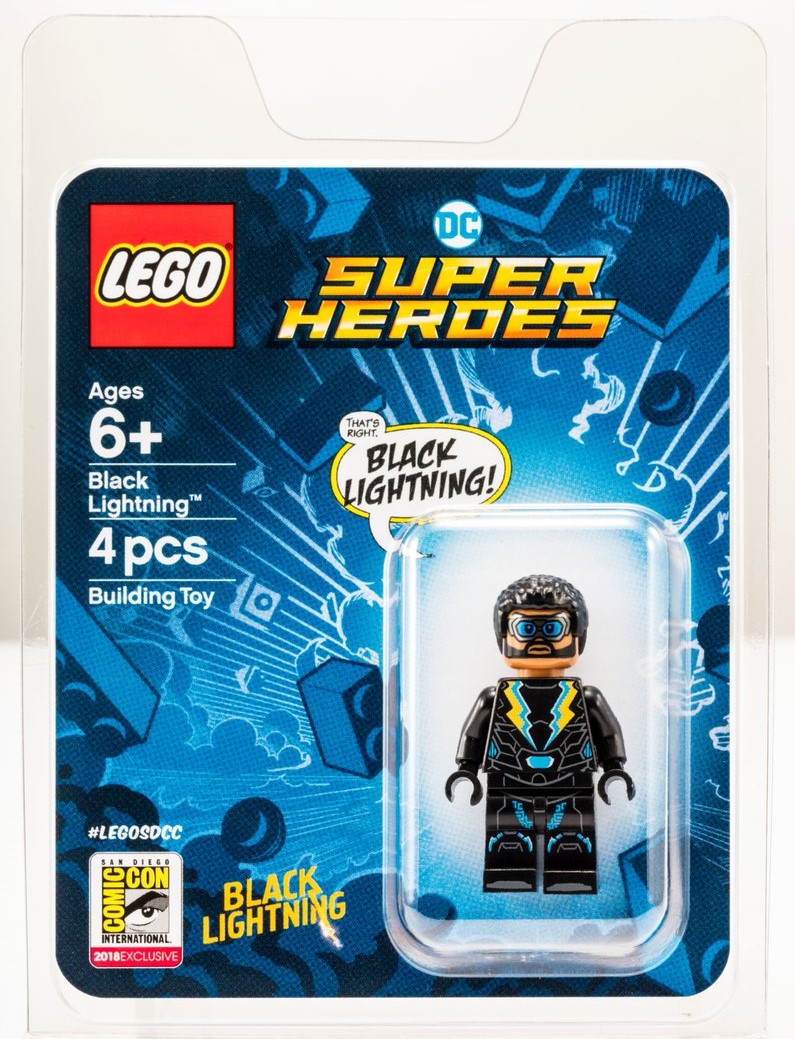 And that’s it for Part 3 of my LEGO DC sets retrospective of 2018! Thank you guys for tuning in! This year was definitely the best year for a DC Arrowverse fan – in relation to the number of characters we received from that universe. Anyways, I’m going to take a good sleep now. Take care!