Hello everyone! Welcome back to my second-ever LEGO DC retrospective! Last time, we explored the year 2020, and it was such a lacking year. LEGO hadn’t put much effort into the theme. Today, we will be looking at 2019, another quite lacking year for the LEGO DC. Why? Well, they decided to only focus on Batman. I love Batman as much as the next nerd, but when the whole DC theme is focused on Batman, it gets annoying. DC is full of a vast range of characters, including the Justice League. So why does LEGO only focus on Batman? Well, that’s a question for them to answer. I’m just the guy looking through these sets, so let’s do that.

Batman Batsub and the Underwater Clash (76116)

I believe that this has to be the most underrated Batman set to date. It kind of flew under my radar for a while. Before this was released, Aquaman had just come out in theatres, making this $30 USD set an indirect tie into the film. After thoroughly enjoying the movie, I decided that I wanted a LEGO Orm/Ocean Master figure, and the only way to get him was through this set. And one day, when it came on sale, I just decided to buy it. And I did not regret that decision – even to this day. Firstly, I loved the minifigures. The Batman in this set was quite nice. I was a little sad that they didn’t give him a unique, exclusive suit. It was just a typical Batsuit without the cape, and with a mask and flippers.

The Aquaman figure was also quite nice, with the new recolour of his hairpiece, a new face and torso print which was inspired by the comics. I do wish he came with scale printing on his legs. Finally, the star of this set was Orm. He reused a helmet piece, which had near-perfect accuracy to the film. He had two amazing face prints and a unique torso. I do wish they gave him printed purple legs because the black ones looked jarring. The set also came with a shark, which was an amazing inclusion on their part. Both Aquaman and Orm came with power blast pieces that could be attached to their legs, so you could display the figures in cool poses. 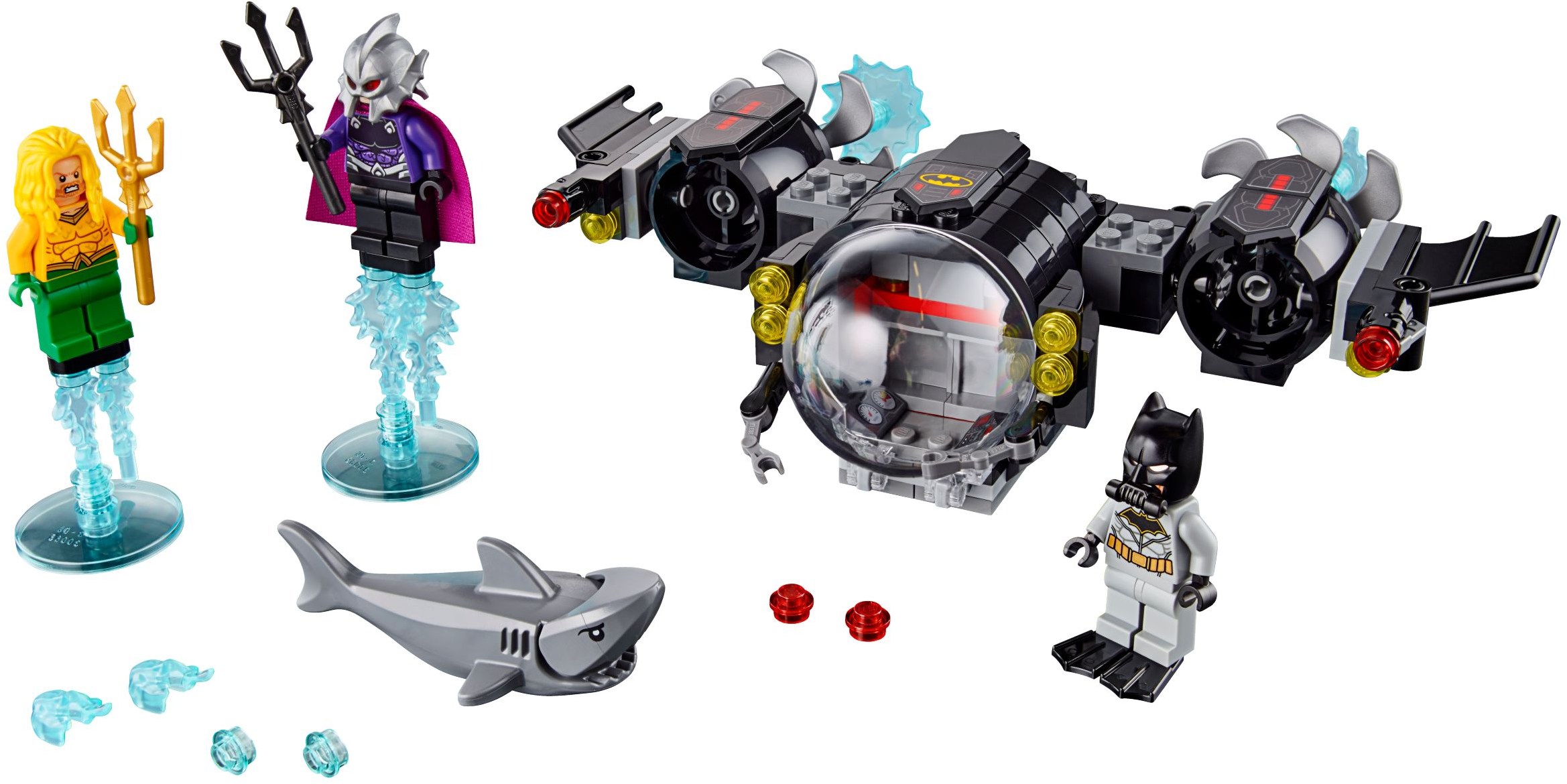 The set itself was surprisingly amazing. The Batsub was a unique concept. The pod at the front could open up to seat one minifigure. It also had arms to hold onto external objects. At the side were four yellow studs to represent lights. The wings were well-made. Each of them had a stud shooter and a rotor blade that could spin. The main play feature of this set revolved around the whole back section revolving. It spun a full 360 degrees which was such a unique feature.

I hated this $40 USD set with a passion and will continue to hate it. The Batman in this set was the same as before, but he came with a cape this time, and a Batarang. The Flash was technically new. He used the same helmet, face and torso print from the 2018 figure, but this time, came with red and yellow dual moulded boots. Poison Ivy was a nice inclusion, although she was too simple for my liking. She only came with a new face and torso print. She was just not very appealing in my opinion. Finally, LEGO gave us our first Firefly minifigure. He came with a new helmet piece with a very common faceprint. The torso was nice, but the built-up jetpack was awesome. The power blast pieces attached really rounded the figure out. 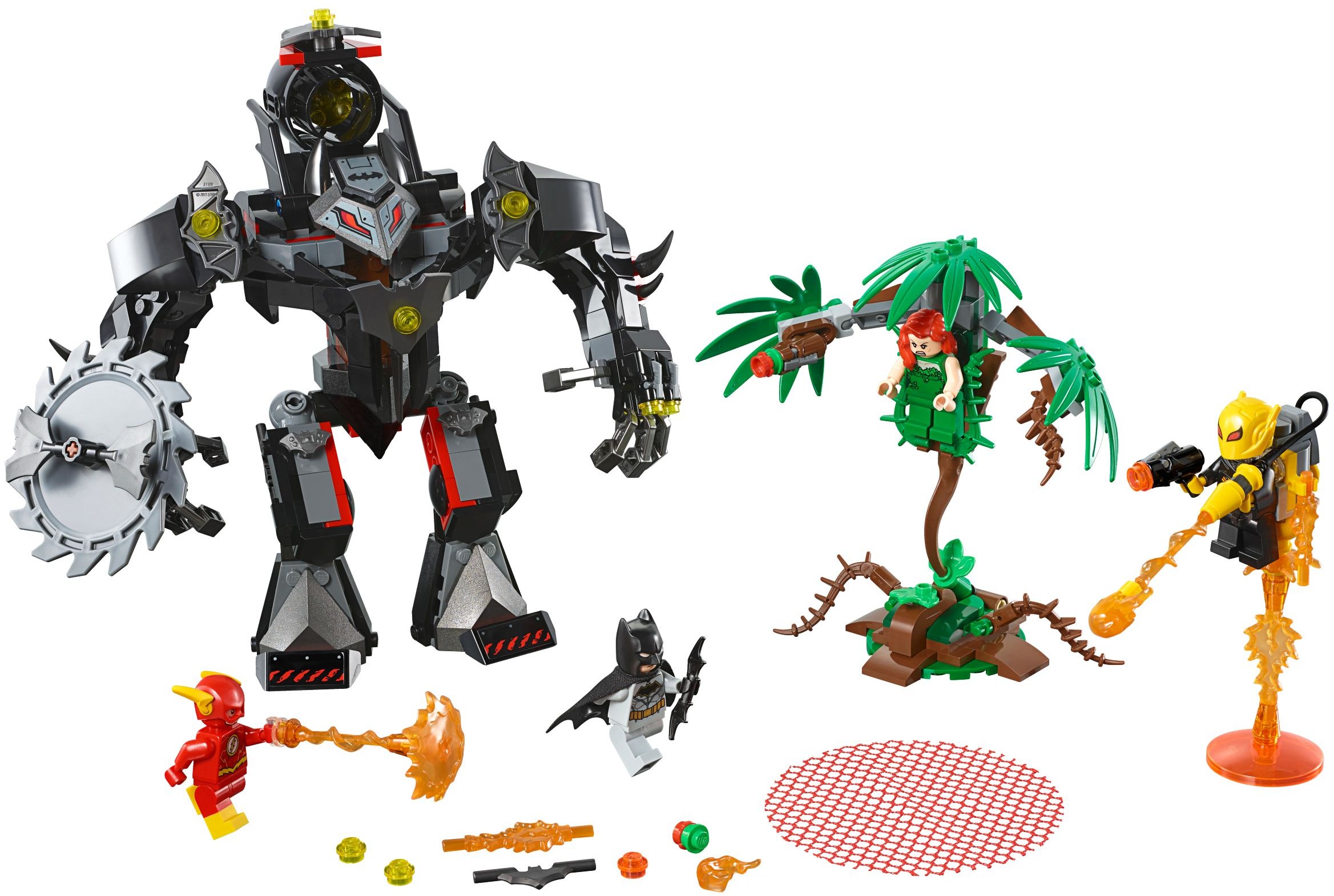 I personally didn’t like the builds at all of this set. The mech build was just not my type. The design had no resemblance to anything Batman related and was just a boring build overall. It had many points of movement, a saw and some stud shooters. It could also fit Batman inside, and also consisted of a net launcher. But yeah, there wasn’t much to praise about this mech. The same went for the Poison Ivy mech. It had a few points of movement, a stud shooter and a place to hold her up. Yeah. This set was pretty unexciting.

This $20 USD set was actually really decent. This was released as part of the 80th-anniversary line of sets. The Batman was completely new, even though it had very similar printing to the one previously discussed before. However, a clear difference between the two was that the newer one had a dark bluish grey colouring. I’m quite sad that they didn’t give him any special arm printing, leg printing or dual moulded boots – especially because this was our 80th anniversary Batman figure. LEGO had always been cheap in this area for the superhero theme, so it was quite sad to see.

The Robin figure was a nice inclusion since we hadn’t gotten him in a while. The minifigure was based on the Damien Wayne version. Both his face, torso and cut of the cape were new. Finally, LEGO gave us another Mr. Freeze. The amount of times they have included this villain in DC sets is kind of annoying since there are so many Batman villains to include. He had a unique look from previous versions, especially with the use of Mysterio’s fishbowl piece from the Spider-Man Far From Home sets. The freeze gun that was attached to a backpack build was quite nice. His torso was cool, but again, they cheapened out on the leg printing.

The main build was amazing, and I am kind of sad that I missed out on this set. It was heavily inspired by the Tumblr from the Dark Knight Trilogy of Batman movies – especially with the wheel placement and overall shape of the vehicle. The new weapon accessory pieces were put to good use in this set, which has the build a very military and heavy-duty look.

The main play feature of the build involved being able to split it in the middle, which then formed two bikes for both Batman and Robin to pursue Mr. Freeze. However, the original configuration looked the best. The secondary build was just a sledge build for Mr. Freeze. He could fit in it, and then with the help of the fender pieces, it could slide easily across the floor. To be honest, although it wasn’t a set that was a must-have, I really regret missing out on it because the main build was quite solid.

And that’s it for today! So far, 2019 wasn’t a bad year for LEGO DC. Two out of the three sets discussed today were quite solid, but it still doesn’t make up for the fact that these sets were only Batman focused. As I said before, DC is more than just Batman and Superman. They have so many diverse heroes and villains, yet we keep getting Batman, Robin, Joker etc. Fans haven’t been happy with the lack of character representation, meaning 2019 hasn’t gone off to a good start for DC fans. Anyways, that’s it for me today! I’ll see you in Part 2! Bye!