As 2019 progressed, every Marvel fan became more and more anticipated for something that was to shatter cinema as a whole: Avengers: Endgame. This movie was the finale to 11 years and 21 movies from Marvel Studios. Everyone was hyped. And to celebrate this monumental occasion, LEGO decided to release 5 Endgame sets in April, and one in December. So 2019 sets were going to be the best LEGO Marvel sets of all time right? Ummm…. let’s just say that it didn’t meet expectations. I remember when the minifigures and the set descriptions leaked. Many, including myself, were preparing to be disappointed. I even planned on not picking up any of the Avengers Endgame sets after the set descriptions were leaked. Day in, and day out, thoughts circulated in my mind of how I wish we were going to get something better.

And then the set pictures were finally leaked. Before I get into this, I do want to mention that this movie was kept tightly sealed. LEGO, therefore, didn’t have much concept art to go off of, which is why half of these sets weren’t even related to the movie. But nonetheless, let’s take a look, to see if the LEGO Marvel sets of 2019 met expectations. Also, there are spoilers for Avengers: Endgame.

Following the previous year’s Outrider Dropship attack set, which was basically a mini battle pack for Outriders, LEGO decided to re-do the concert again. However, they doubled the price from $15 to $20 USD this time, so that they could use more pieces to create a more expensive build. Like the previous set, we got Outriders – which was fine, as they were the disposable army of this movie. They had the same amazing head and torso prints as before, but this time, they had a more substantial build for their rear four arms. It was bulkier, as they used clip and claw pieces, opposed to the droid arms that were used in 2018.

Again, it annoys me that LEGO didn’t go that extra effort to give them leg printing. They re-used this minifigure so many times, which was fine, and it also saved the company money, opposed to creating a new minifigure. But come on! They could’ve given them leg printing, which would have costed a few cents extra. I know this is a small thing, but to me, an adult collector, it matters. If you want to hear more on this subject, I recommend you checking out my LEGO Marvel Rant. We also got a second version of the Outrider – this time with a pauldron piece and claws on its hands.

Finally, we got the first Avenger in the wave: Captain America. After eight years of the LEGO Marvel theme, we finally received a specific new mould for his iconic helmet in 2019. And it looked amazing! It had an A printed on it, plus two wings on either side. He got a new face print too, although it majorly consisted of blue, so it could mesh well with the colouring of the helmet. His outfit was that of the new Quantum Realm suit, which all the Avengers wore for a very, very small section of the movie. I guess that LEGO wanted to save money by reprinting the same torso and legs for every hero, even though it had a limited appearance. Yes, the printing is phenomenal, especially the dotted printing all over. But again, like the Outrider minifigures, LEGO could’ve done more.

Something that is present on the real suit was the A symbol. All LEGO had to do was print this, along with a few extra details. This would’ve really elevated the minifigure – and many fans would’ve been more forgiving for the suit’s reuse. I really wish that we got his regular suit from the movie, as this was our final Chris Evans’ Captain America minifigure. So yeah, although the Quantum Realm suit was cool, I wish we got the proper blue variant. I may actually do an article in the future on how the Endgame sets could’ve been improved. Also, we got a newly printed shield for him, as this time it was printed on a dark grey piece, opposed to a red piece. 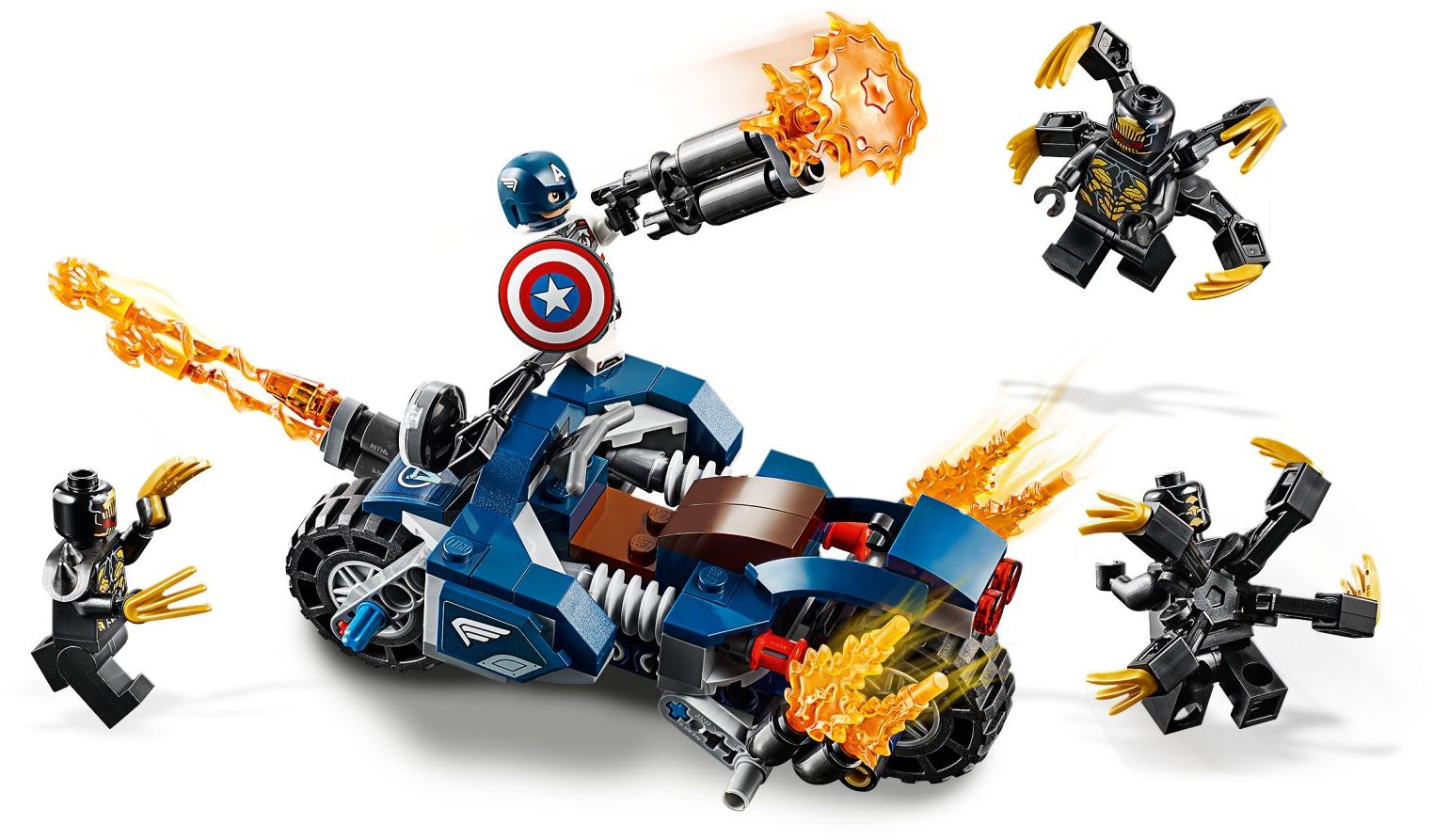 Yay! Another over-sized bike. Yeah, I know kids love these things, but seriously? These are the new staple for $20 USD Marvel sets. Anyways, there were two disc-launchers on each side which could be shot at enemies, which shot a printed Avengers symbol. I did like the overall build, especially the use of the power-burst piece to create engine exhausts and bullets being shot. But yeah, please LEGO, give us more play-sets!

Another year, another mech should be the motto of LEGO Marvel for 2019, because guess what? Yeah, we got another mech. Let’s start off with the minifigure selection. Before this set was revealed, there was a rumour (which was debunked later), that we’d get a big fig Outrider. So imagine my disappointment when we learned that we were just going to get two regular Outriders. Hulkbusters should always come with a Hulk figure – or some big fig villain. But we got two minifigures.

Both Outriders were just re-uses of previous versions. We got Ant-Man and War Machine in their Quantum Realm suits, as discussed previously. However, this time, Ant-Man finally received a new helmet mould which was more accurate to the look of his suit. The mould was the exact same one introduced with Firefly from the DC wave earlier that year. He also came with an inaccurate hairpiece. The face print underneath was not new. War Machine’s helmet and face was originally used in the Bricktober pack from last year. Like I mentioned before, I wish they got the regular Avengers: Endgame suits. 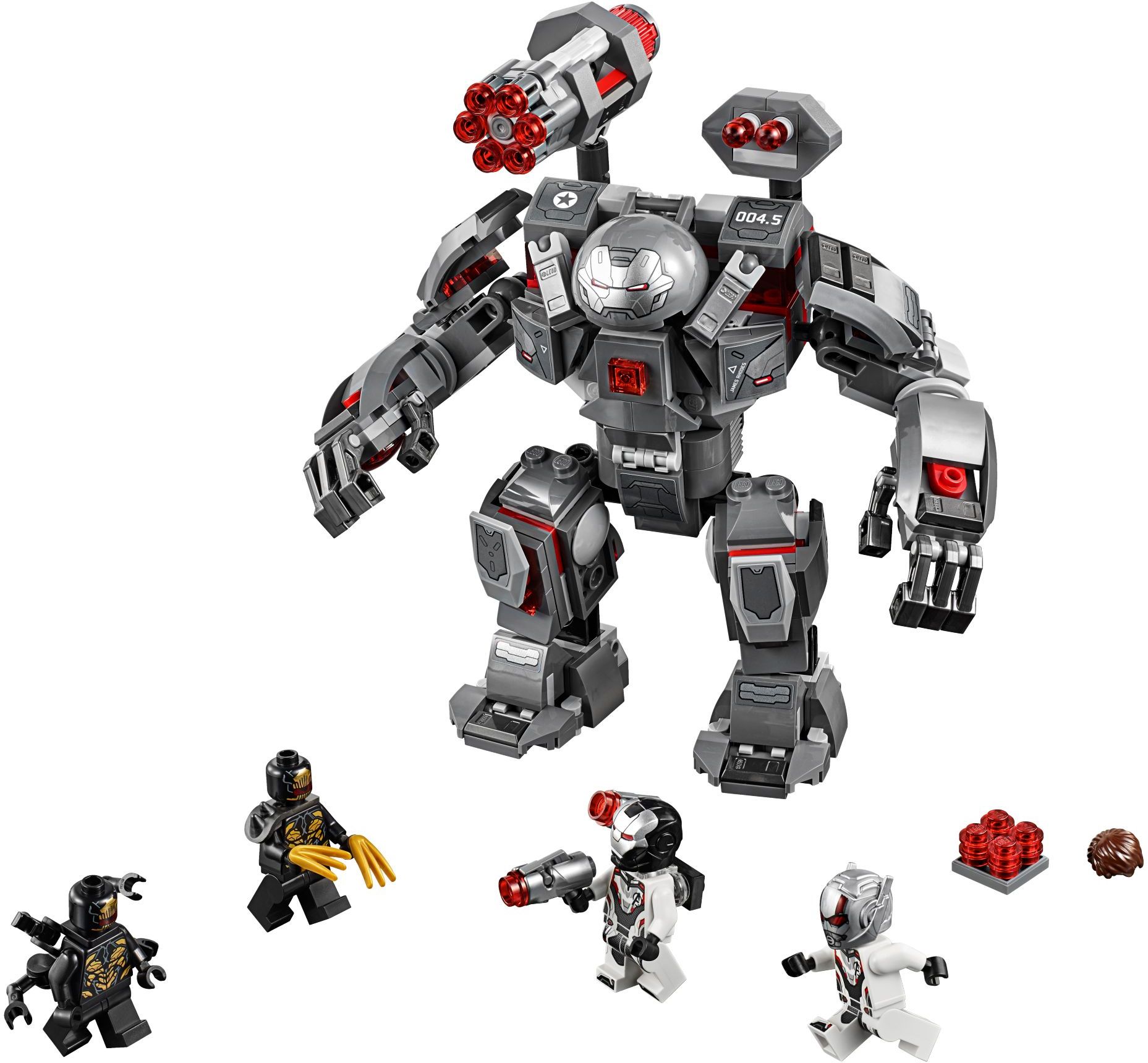 So yeah, technically the mech wasn’t the Hulkbuster. rather, it was the new $35 USD War Machine Buster. First of all, that name made no sense. The Hulkbuster was made to fight the Hulk, which is where it got its name. So going by that logic, shouldn’t this be used to stop War Machine? Just something to think about. And secondly, this thing didn’t even show up in the film. Most people were forgiving of this set as it was probably based on concept art – and therefore LEGO didn’t know if it was going to make it into the final cut of the film.

Anyways, let’s discuss the design. It had a similar structure to the 2018 Hulkbuster, apart from part changes here and there. Surprise, the chest could be opened to place War Machine in. Both arms and legs were able to rotate as you pleased. The primary play-feature, besides its ability to move, were its cannons. It had an attached six-stud-shooter, mounted on top of its left side – which closely resembles War Machine’s iconic look. On the other side were two flick-fire missiles which could also be launched at enemies. But that wasn’t it. On its arm, two stud shooters could be attached and removed. But yeah, it was a cool variant of the Hulkbuster. If you’d like a more-in-depth analysis of this set, and a comparison of every Hulkbuster, go check out my Ultimate Hulkbuster Showdown article.

So far, the 2019 LEGO Marvel Endgame wave was pretty average. The minifigures, decent, and the builds, 50/50. However, this $60 USD set blew it out of the water! LEGO knew that Endgame was going to be the conclusion for the first character in the MCU – Iron Man. If he was going to die, or was going to retire didn’t matter, because this was going to be the conclusion to this version of the character. So LEGO made the perfect set to send off this amazing character – The Ultimate Iron Man set. With that out of the way, let’s get into the best minifigures from this wave.

Finally. LEGO did it. They gave us the Mark 1 Iron Man suit – The original suit. The suit that started it all. The suit that was “built in a cave, with a box of scraps”. And LEGO delivered on this being the ultimate Iron Man set. The minifigure uses the Invincible Iron Man helmet, which has a rustic and dirty print, to represent the scrappy look. The dirt and grime detail continued onto the torso and legs. And on the side of the torso, there was a print saying ‘Mark 1’. The suit also came with a jetpack piece. This was a great minifigure, although I wish we received a new mould for the helmet as the eyes and mouth were hollow.

The Mark 5 was also included in this set, being the iconic suit from Iron Man 2. The suit was first hinted at in the LEGO Malibu Mansion set, as its suitcase storage was included in that set. Anyways, it’s helmet, torso, and legs were so accurate, and exceptional. LEGO also included the Mark 41, (also known as the Bones suit) in this set. This figure has to be one of the most unique Iron Man suits to date, with its black and gold colour scheme. No words can describe the amount of detail that LEGO put into this. It was a great minifigure.

But it didn’t stop there. LEGO also so graciously included the same Mark 50 from 2018, which was a well detailed figure. All the armour had transparent heads, with the exception of the Mark 50, which had the new Tony Stark face, released in 2018, which could be swapped out with each of the suits. And finally, LEGO gave us two Outriders. This was a top-of-the-notch minifigure selection. 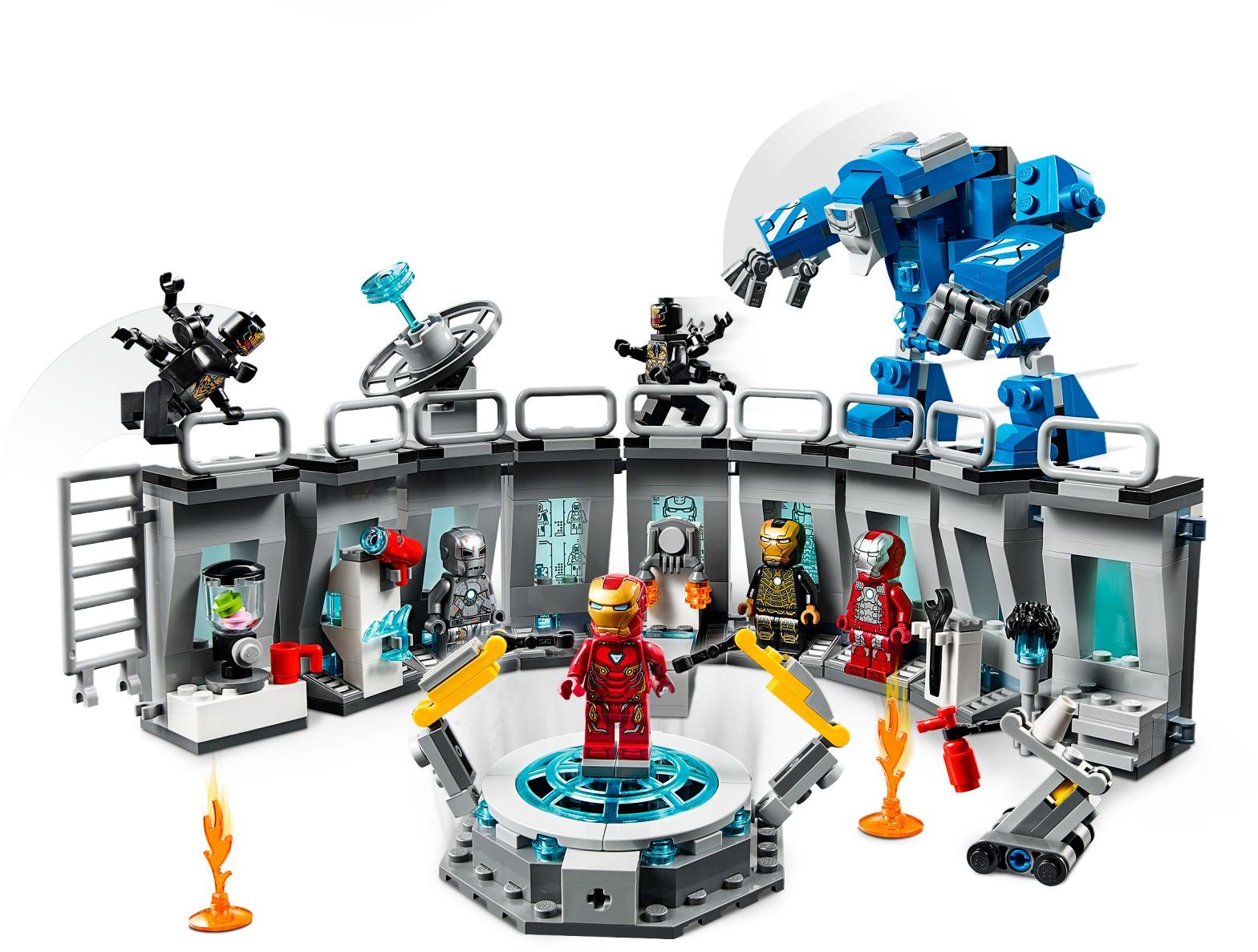 To get it out of the way, the IGOR mech was trash-looking, but it was great to receive yet another suit. It could place Iron Man inside, and it had movable hands, legs and fingers. Other side builds included a suit-up area for Tony, which had adjustable arms to place his armour on – a direct reference to the Avengers. There was a computer bay with a spinning chair, too. Dummy, the small robot was also included in this set, holding a fire extinguisher – a reference to all the Iron Man films.

Anyways, the actual hall of armour was amazing. There were 9 modular sections which could hold suits and other miscellaneous items. Three of them had stickers which had displays of Iron Man suits, some that we have and haven’t received in LEGO form. As it was on hinges, you could spread the hall of armour out, or bring it in. The sections could be pulled out, and stored on top of each other, so you could add height. Finally, there were filler items in this set, including a blender, a taser, a stud-shooter, a jet pack holder, a tools rack, and some draws to fill up the empty space. The whole concept of this set was ingenious. Even though this didn’t appear in the film, this set was a great send off to Iron Man.

So that’s part two of my 2019 LEGO Marvel retrospective! I really hoped you liked this. It was really fun going back a year to look at the Endgame line. Some of these sets are actually still available, depending on the store you go to. So if you’re a Marvel fan, go pick up the Hall of Armour! You will not regret it. But that’s it for now! See you next time!