And we are back for Part 2 of my LEGO Marvel retrospective for the year 2020. So far, the Avengers sets were mediocre and just plain boring. More repeats of the main six Avengers plus no leg printing, in addition to sub-par builds. It wasn’t a great start. So what about the Spider-Man sets from early that year? Surely they made up for the quality? Take a wild guess. No, no, no! I’m sorry – just read the disclaimer.

And again, the disclaimers. Just because I think that 2020 was a bad year for LEGO Marvel, doesn’t mean you have to agree with me. We can all have different opinions, and that’s ok. I just believe that compared to 2016 (in my opinion the best year of the theme), 2020 matches that quality in no way. And that is no disrespect to the designers. What they do is hard, and especially with budget constraints and other requirements, what they produce is a quality product for the mass market. However, as a consumer of their product, I get to criticise it, so it can hopefully be improved. Anyways, let’s just jump into this retrospective.

As I said before, I prefer Mighty Micros every day to these USD 15 mechs. And this is no exception. Yes, as a kid this would’ve been amazing. However, if LEGO Harry Potter can satisfy both kids and adults alike, so should Marvel. 2020 saw the re-release of the Spider-Man figure used in 2019. However, because this was a USD 15 set, LEGO decided to skip on leg printing. Surprise surprise.

And although it was a solid build, the over-saturation of mechs in the theme had gotten to me by then. It could move its arms and legs. Cool. It could grab figures in its hands and use its back arms to fight. Cool. You could attach web pieces to it. Cool. Again, it was a solid build. Just not an exciting one. This mech was also released as part of the 3 in 1 (66635) Super Mech Pack. 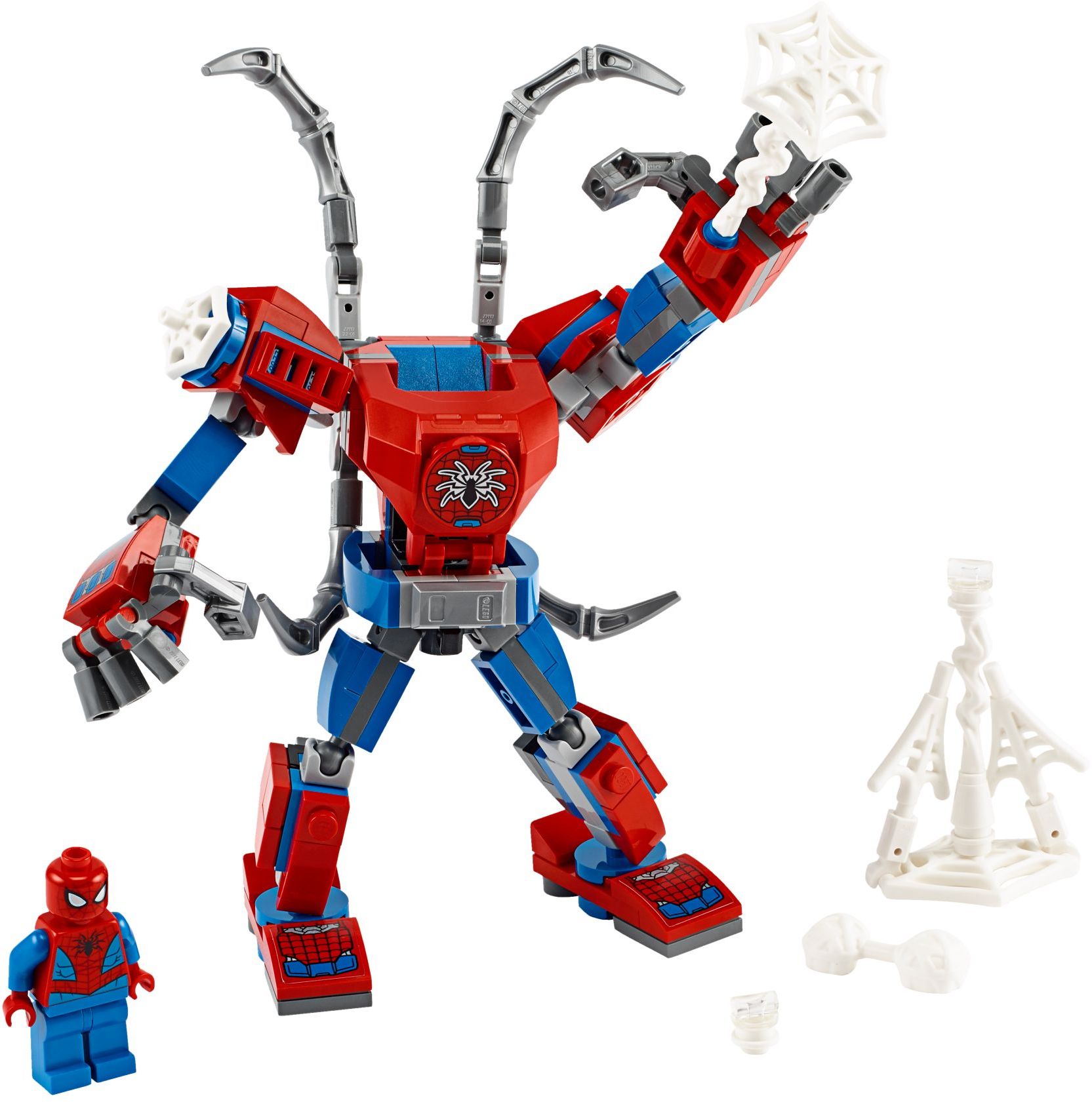 LEGO decided to also give us two 4+ Marvel sets in 2020. And low-key, this set isn’t that bad – for a 4+ set. Technically, we got a new Vulture because we got a light green wing attachment. However, I do wish that LEGO reprinted the entire figure in lime green to match this. It wouldn’t have cost them more and would’ve been extremely easy to do. The same less-detailed Spider-Man was included in this set. And finally, the security guard was exclusive, with the new torso print.

The truck was a solid build. Kids like vehicles, and this was perfect. You could fit the driver/security guard inside. And in the back, the truck could hold precious cargo, including a safe with jewels and gold. Spider-Man even got a cool motorcycle. Yes, he didn’t need one, but at least it wasn’t oversized. Finally, the accessory pieces, such as spiderweb pieces, dynamite, and chains were all nice add-ons and would’ve been invaluable for play.

Wait. Why am I treating all the sets like garbage besides this one? Simple. It’s because of the 4+ branding. This set was specifically designed for children. For a kid, this had a hero, a villain, and a civilian to save. Perfect. The truck and motorcycle were perfect as kids love vehicles. And finally, the accessories on the side would make playing just so much more fun. And with all that wrapped in a USD 20 price tag, this would be the perfect setting for a 5 or 6-year-old. The other sets on the other hand, like most Harry Potter sets, usually have a broader age appeal and therefore should’ve catered to all ages, instead of kids. I’m just saying. 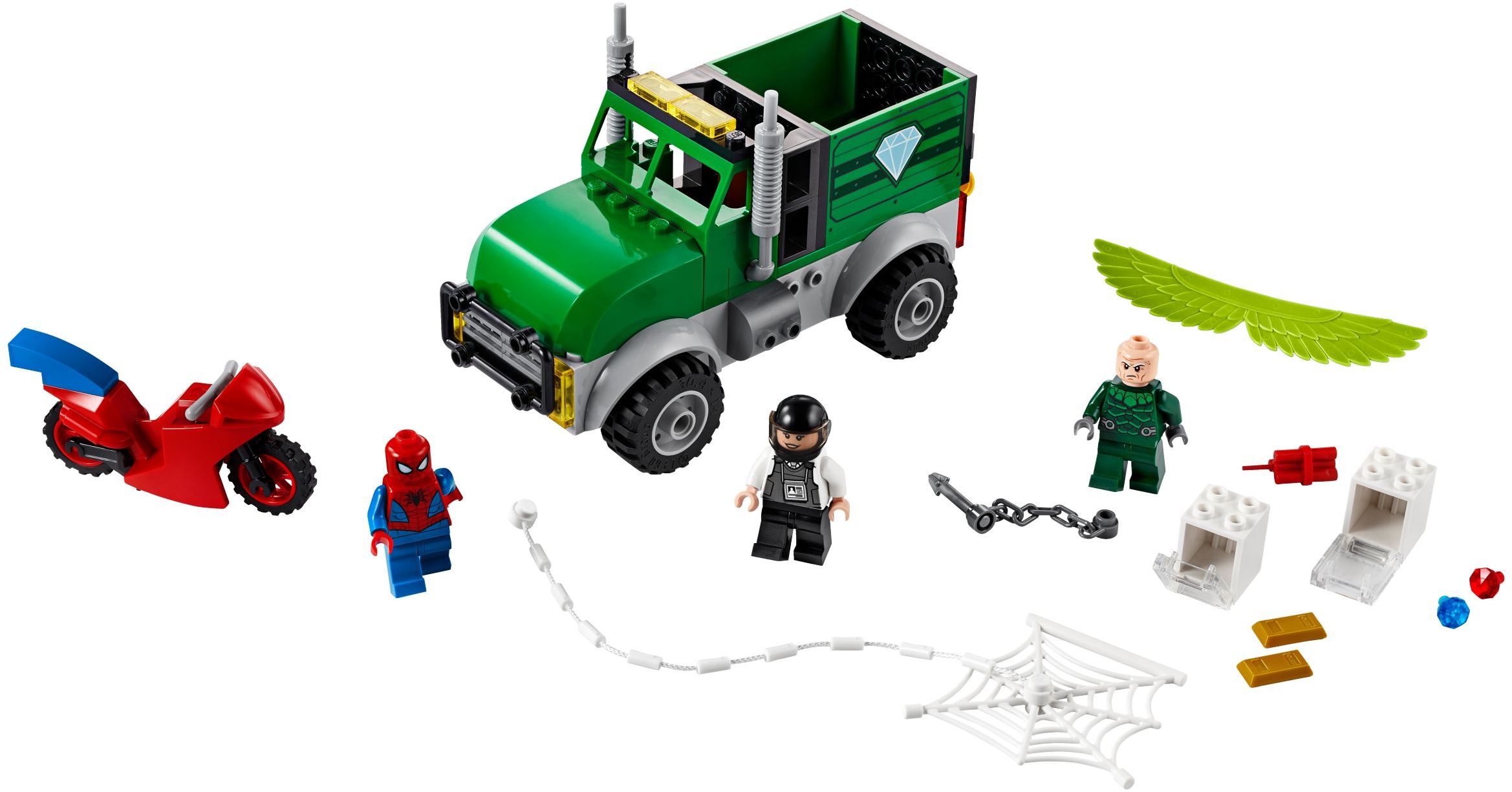 After that pleasant surprise, we come across this garbage. I want to also personally congratulate this USD 20 set for claiming number 2 on the Worst Marvel Sets of all Time (my soon to be published article).

The minifigures weren’t terrible. Spider-Man was a decent minifigure. He came with dual-moulded legs, so I was happy with that. Spider-Girl was quite a simple minifigure, but since she was a new character, I was glad that she was included in the set. However, where was her leg printing? Same thing with Doc Ock. He was a cool figure, but where was the leg printing? At this point, I have just become so sick of LEGO not giving us leg printing for the majority of sets. It’s just so annoying.

To quote me: “But the build was atrocious. Did we seriously get a bike for Spider-Man? For Spider-Man? The superhero whose whole gimmick is swinging on webs to get around New York. In what world would Spider-Man need a bike? Peter Parker would. Not Spider-Man. And this oversized bike wasn’t very aerodynamic either. Legs were hanging off the bike. Yes, I’m just nitpicking at this point. But I don’t care. The build was atrocious. And guess what? It could be split up into a mini spider-walker and an unfinished looking bike. WHY DOES SPIDER-GIRL NEED A SLOW WALKER TO FIGHT? WHY? JUST WHY? I’m done talking about the set now.” 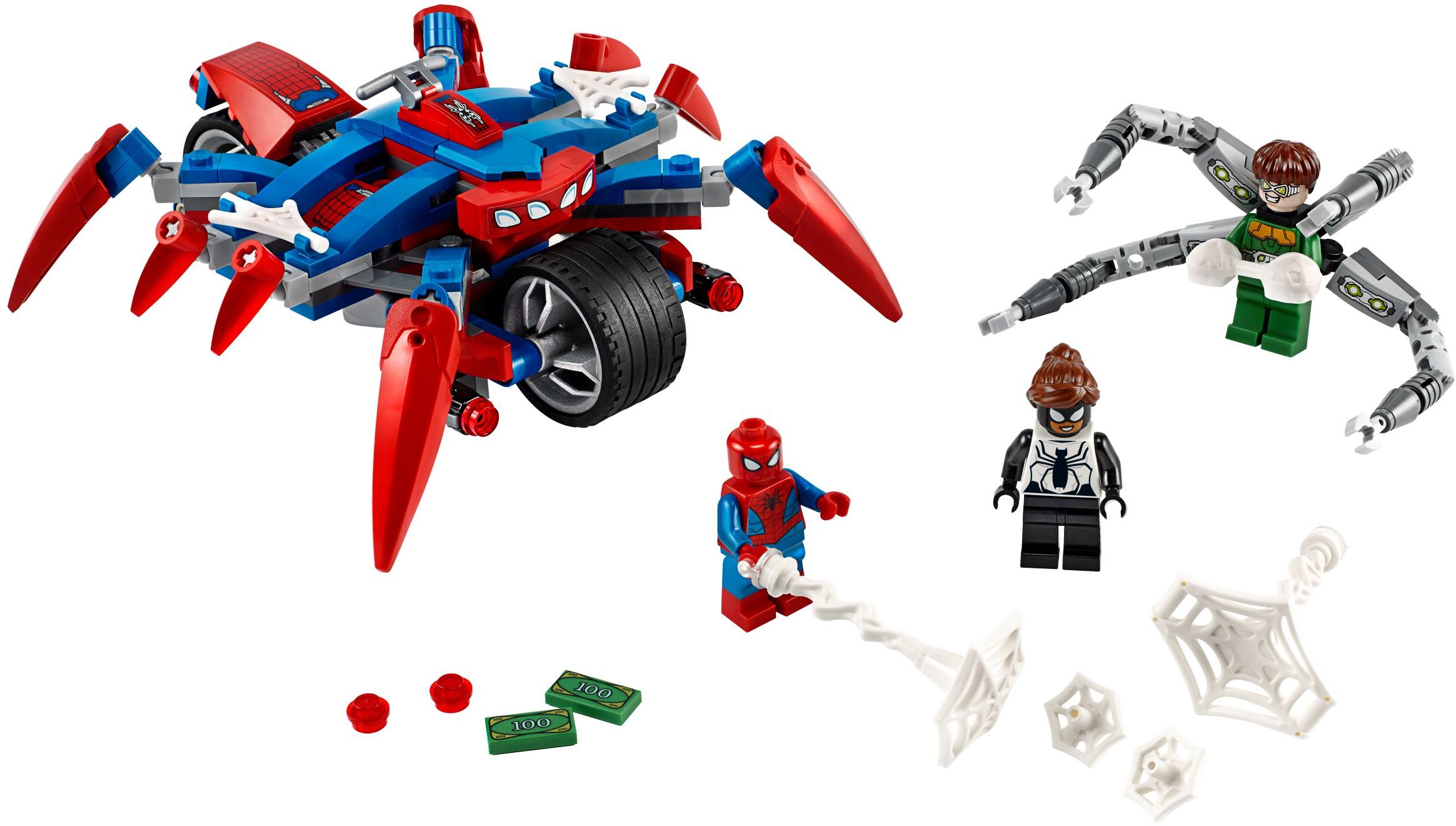 This USD 30 set was not as good as the other 4+ set I talked about. Both Spider-Man and Spider-Gwen were repeats, and therefore not too important. However, the main reason I was itching to buy this set was because of Mysterio. That comic-book looking Mysterio was something I wanted to get, and it was annoying he came in a 4+ set. Using the same fishbowl piece as the 2019 version, the new one came with a cool new torso print. I’m just mad that the square pattern on the torso didn’t continue onto the legs – something that is clearly shown in the comic books.

The bank had a cool play-feature to knock the vault out easily, as it was placed on jumper plates. There were also mini vaults which stored gems and gold bars. The helicopter just looked dumb, but kids would not care, because it could spin the propellers and could fit a minifigure. Finally, the Mysterio mech was surprisingly something I genuinely want. I don’t know why. It just looks cool. And even though it was very similar to the Juniors’ Lex Luther mech from a while ago, it just had a sort of appeal for me. Yes, you could fit Mysterio inside and move his arms while the mech could be driven. The accessories were nice inclusions. Overall, it was a fine 4+ set. 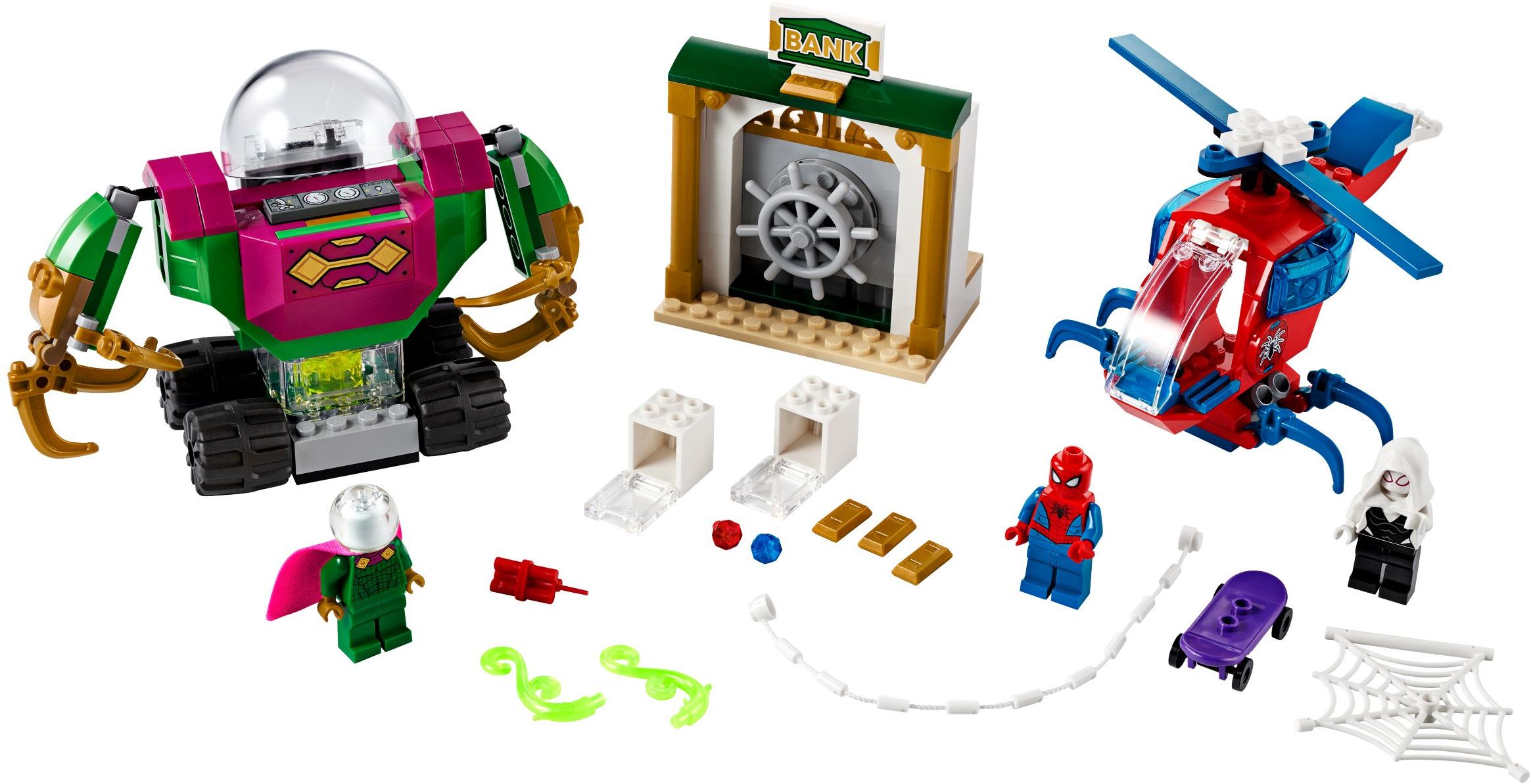 Not gonna lie, this was genuinely a cool set. Yes, we got another repeat of Venom and Spider-Man. However, Spider-Man Noir appeared for the first time in LEGO form here, which was amazing. He was such a cool-looking figure, with a new face and torso.

The Venom mech was in the scale of the previously discussed Iron Man, Thanos and Spider-Man mechs. Like those, it could fit a figure inside and had a ton of movement potential in the arms and legs. The Spiderjet was genuinely a fun build. It was so unique to jets that we have received in the past, meaning this design captured my eyes. Like previous jets, it could fit a minifigure, and the winglets could be adjusted slightly. One of the sides consisted of a four-cannon setup, in the form of flick-fire missiles. On the other side, there were two disc launcher cannons. Overall, this was such a sick build, and I can bet that both adults and kids enjoyed it.

It must’ve been pretty surprising how I talked highly of a 4+ set. 2020 was a confusing year, or as Hulk likes to put it, “These are confusing times”. Sadly, I could appreciate a 4+ set and only one mainline set. LEGO Marvel had dropped the ball, and we aren’t even halfway through 2020. So till next time!