What’s up guys! Yet again, I’m attending a writing marathon tonight, where I’m trying to pump out a full article before I get too sleepy. Right now, it’s 10:36 pm and I’ve worked a full 9 hours in 36-degree Celsius heat so I can make enough money to earn LEGO. So let’s see if we can stay awake! So yeah, welcome back to Part 3 of my LEGO Marvel 2020 retrospective. Today, we will look at the last two Spider-Man sets that weren’t part of the previous article. So let’s tackle this!

And again, the disclaimers. Just because I think that 2020 was a bad year for LEGO Marvel, doesn’t mean you have to agree with me. We can all have different opinions, and that’s ok. I just believe that compared to 2016 (in my opinion the best year of the theme), 2020 matches that quality in no way. And that is no disrespect to the designers. What they do is hard, and especially with budget constraints and other requirements, what they produce is a quality product for the mass market. However, as a consumer of their product, I get to criticise it, so it can hopefully be improved. Anyways, let’s just jump into this retrospective.

This had the potential to be an amazing set. This USD 80 set came with two exclusive minifigures – which probably justified buying this set for many people. Sadly, in 2021, one of those figures were re-released in another set. So at the time of writing this, only Spider-Ham remains exclusive to this set and to be honest, he was the best figure of this set. LEGO created a completely new mould for his very unique head.

If there’s one thing I’m happy about the Marvel theme back in 2020, it was the fact that LEGO kept expanding its Spider-verse character gallery – giving us Spider-Girl, Spider-Man Noir, and Spider-Ham. Anyways, I can’t stop gushing at the head mould! The printing complimented it perfectly! It had such a comic/goofy looking design, and I loved it! LEGO gave us a new torso print – something that looked similar to the Ultimate Spider-Man minifigure that we have received way too many times. Anyways, I adored this minifigure! 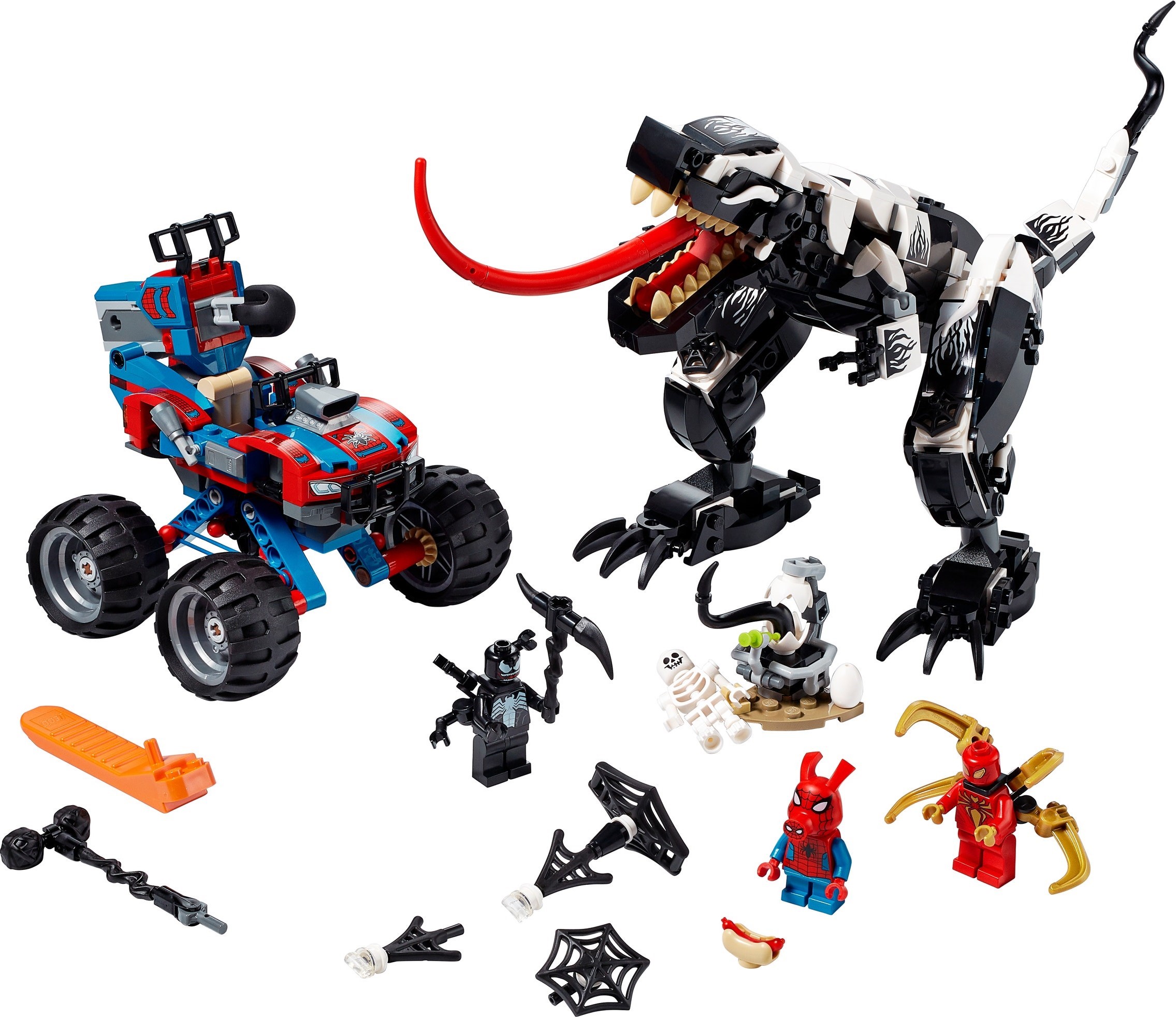 Honestly, the new Iron Spider minifigure was kinda boring. We had received a much more detailed version of this character back during 2015. Both the head and torso on this one were so simple and bland. And like the previous version, we got four gold arm attachments – but this time different pieces were used. Anyways…Venom. Yeah… Venom was included in this set. I’m sorry. I’m sick and tired of the same villains being used for Spider-Man. It’s like LEGO hasn’t discovered the other thousands of villains in Spider-Man’s Rogues Gallery. Just the same old Venom, Carnage, Doc Ock and Green Goblin. WHERE IS OUR COMIC BOOK VERSION OF THE SHOCKER? WHERE IS THE LEAPER? AND WHERE IS SILVER SABLE AND BLACK CAT? COME ON LEGO! I’m very disappointed. The upside of Venom’s inclusion was that we received the Spider blast pieces in black, which was awesome!

Now back to the good. The Venomosaurus was amazing! Not very often so we get brick-built dinosaurs. This idea was so fresh and new, especially for a superhero set! And the best thing was that this dino was an actual thing in the Old Man Logan comics, making this build a must-have. The face design was the best part of the build. The horn pieces for the eyes, the tan pieces for the teeth (to show decay), and the long tongue – the designers put a ton of time and effort into this. It also had many points of movement on its arms, legs, and tail. A secret play feature on its back, which could be opened up to reveal a LEGO skeleton. That was such a cool hidden detail and I’m glad LEGO included it! Even the small egg build on the side was cool! It was insignificant, yet an amazing inclusion.

Something that wasn’t too good was that Spider-buggy. SPIDER-MAN DOES NOT NEED A BUGGY!!!!!!! Well, it had suspension and a massive rubber missile which could be shot at the dinosaur. I’m sure it was something the designers had to put in, so they could achieve the price point that was set for them. Anyways, this set had some amazing stuff and some annoying inclusions.

You know what? I’ll give LEGO the pass for this USD 30 set. Why? Well, you’re just gonna have to read to find out. Spider-Man was the same one used for 2019/2020. I can’t complain, as LEGO gave him dual-moulded boots. Carnage was just a repeat of his 2019 counterpart. He came with the same head, torso and leg printing. He came with some sort of spiked weapon – nothing too cool. The main draw to this set was indeed the Venomized version of Iron Man. He was a pretty cool figure. The helmet was the Invincible Iron Man mould, but with a Venom face print on it. The head was the standard Tony Stark face, and the torso was the best because the printing was phenomenal. You could see how the Iron Man armour was being taken over by Venom. I’m just extremely mad that LEGO cheapened out and decided to skip on leg printing. Surprise, surprise. I’m just so fed up with the lack of leg printing on LEGO figures. I’m sick of it.

Anyways, LEGO was clever in the way they made this set. The Venom walker was a re-colour of the 2019 Spider-crawler. This one had a cooler black and white colour scheme and was overall a nicer-looking build. It had the same play features as its predecessor. As you rolled it across the surface, a Technic mechanism would move each of the legs up and down, to give it that crawling look that a spider makes when it moves. Behind it was a stud shooter which could launch studs at enemies (as the name implies). I like the way that the face was designed. The printed dome piece, paired with the teeth and tongue pieces bought this build to life. And that’s how LEGO got away with basically re-releasing a set. I bet the designers were just bored one day, and then had this thought – Venom. So they decided to re-do an older set and call it a day.

But you’re telling me – it’s not the same set because there was a Spider-car. You are right. You may think I’d get mad with this, but… it was in the comics, so I’ll give it a pass. Don’t ask me why. I will give any build a pass if it was from the comics or a movie. Besides its obvious feature of driving and fitting minifigures, the car had two stud-shooters. Anyways, this set would mostly end up on people’s list for that Venomized Iron Man figure.

And that concludes this article! It is 11:32 pm, so I’ve finished in less than an hour! I still gotta edit it, but with the help of a grammar check app, that’s easy. Anyways, cheers for sticking with me through this, and I’ll see you guys next time! Peace!

Don’t forget to check out my 2020 LEGO Marvel Retrospective Part 1 and Part 2 here!