It’s become a tradition for LEGO to produce special Gifts with Purchase (GwP) sets for the holiday season. I’ll be talking about this year’s GwP today, the LEGO Christmas Tree. 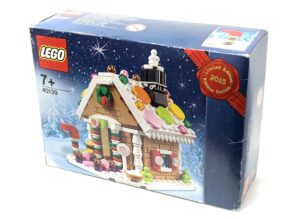 As I got back into LEGO, I was quite excited to get my hands on the one from 2015, a small gingerbread house. The house was almost minifig-sized and filled with detail. I loved that little building – still do in fact.

But in the years that followed, I stayed away from those promotions. They just didn’t do it for me. This is obviously a personal decision: my interest is almost always for sets that work well with minifigures. If it’s a dust gatherer, I’m more likely to give it a pass.

So it was with great excitement that 2019 came around and the LEGO Group announced what this year’s Christmas Gift with Purchase would be a large LEGO Christmas Tree made up of 391 pieces. That’s a lot of pieces. That’s actually bigger than some sets you have to pay to get, and LEGO were giving this one away! 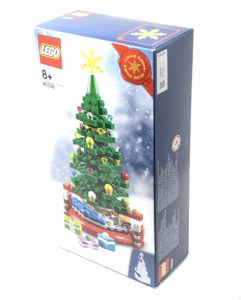 Well… yes… as long as you spent a large chunk of change to qualify to get it; £120 is a lot of money to spend on bricks to get a “free” gift.

What made it worse is that in previous years, getting the main Christmas set was enough to qualify for the GwP. But not this time: the Gingerbread House (the latest winter set, not the little one mentioned above) retails for £85 – not nearly enough – forcing people to spend more money to get something for free…

So let’s crack open the box, pour out the contents, and see if all the excitement and expense is justified…

The box is taller than it is wide, and neatly reflects the shear height of the finished model. There are no minifigures present but we should all have a nice collection of those by now to place around this LEGO Christmas tree.

No stickers are present, nor are there any printed tiles, so this means if you have a large collection of unused pieces, you could conceivably use the online instructions to build your own without having to get it from a LEGO store. 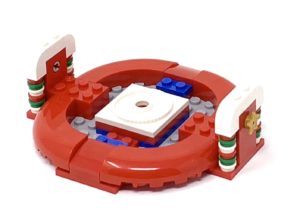 The construction is as you’d expect: you start at the bottom and work you way up. The red base hides a very simple mechanism which makes the little trains turn under the tree. This is also made possible by the door-like structures on either side. The tree is attached to them to brace the structure, leaving the trunk free to rotate the grey platform and consequently those trains. 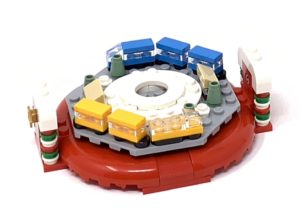 As you go up, the build process for the branches is virtually identical; only certain plates are different to simulate the narrowing of the tree as you get to the top. There are six such units you need to build, and it’s quite a relief to stop when you reach the next stage.

I did however like the method used to place the branches at a 45 degree angle, each time you go up a level. It’s an incredibly simple process that is very effective. 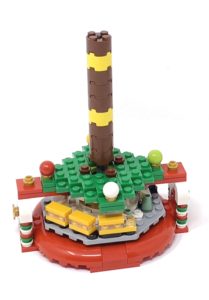 When you reach the four golden quarter-circle tiles, that’s when you build not only the top of the tree but also the part you grab to rotate the base. 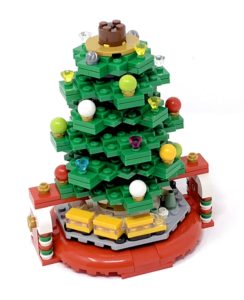 The last few green plates connect to the trunk (they’re the only ones that do), and the LEGO Christmas tree is finished with a green cone piece and a large transparent yellow star. 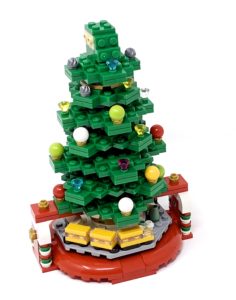 The build is sturdy enough that when you twist the top of the tree, the base rotates, yet the tree stays put. Which means that you shouldn’t have to worry about your construct flying off out of control as you enjoy its one play feature. 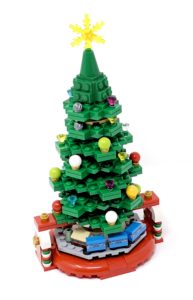 Despite its relatively straightforward construction, this LEGO Christmas tree looks great. It’s hard to convey an organic look with basic LEGO plates, but the designers did an amazing job and actually succeeded in this endeavour. In fact, it’s probably one of the best looking LEGO Christmas trees ever produced. Well, to my knowledge at least. If you know of a better one, please share it in the comments below.

The decorations are various colours of Technic ball joints and jewels, and silver swirled pieces which are usually used as cake decoration or ice cream. It’s simple yet effective. There’s no tinsel, but then again, it wouldn’t have been easy to replicate that in LEGO. 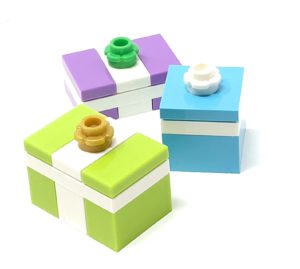 This set doesn’t just come with the tree – it has another little offering up its sleeve in the shape of three colourful brick-built presents.

Their construction is remarkably simple, but they look perfect. Just goes to show you don’t need overly intricate designs to make something look good and realistic.

For a free set, this is absolutely amazing. It’s a big tree, well built and sturdy (even though the construction process itself is quite monotonous), and it looks really, really good. 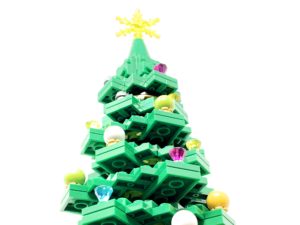 If you were lucky enough to get one, I have no doubt you will be enjoying having and displaying it.

It would feel right at home in an outdoor LEGO city setting, or just on its own.

The only downside though it the barrier of entry. £120 to qualify for it is pretty steep, and because it’s a “gift with purchase” there’s actually no official way to purchase it, which means that those who will enjoy this set will be few and far between.

If I had to rant, this would be it: it should be fair for LEGO to offer a purchase option if you want the “free gift”, but don’t fancy any other sets to qualify. 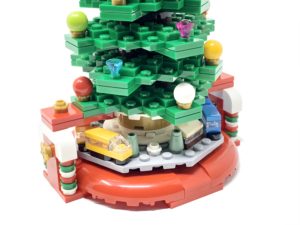 However, as mentioned earlier, you can build your own, since the instructions are available for free on LEGO’s website.

If this review has made you keen to grab a copy of the set yourself, don’t despair: it may no longer be available on LEGO’s site, but some people over on BrickLink are selling their copy, and right now, the price is actually pretty reasonable considering the piece count.

Whether you have this LEGO Christmas tree in your collection or not, I hope you’ll be having a wonderful Christmas this year. 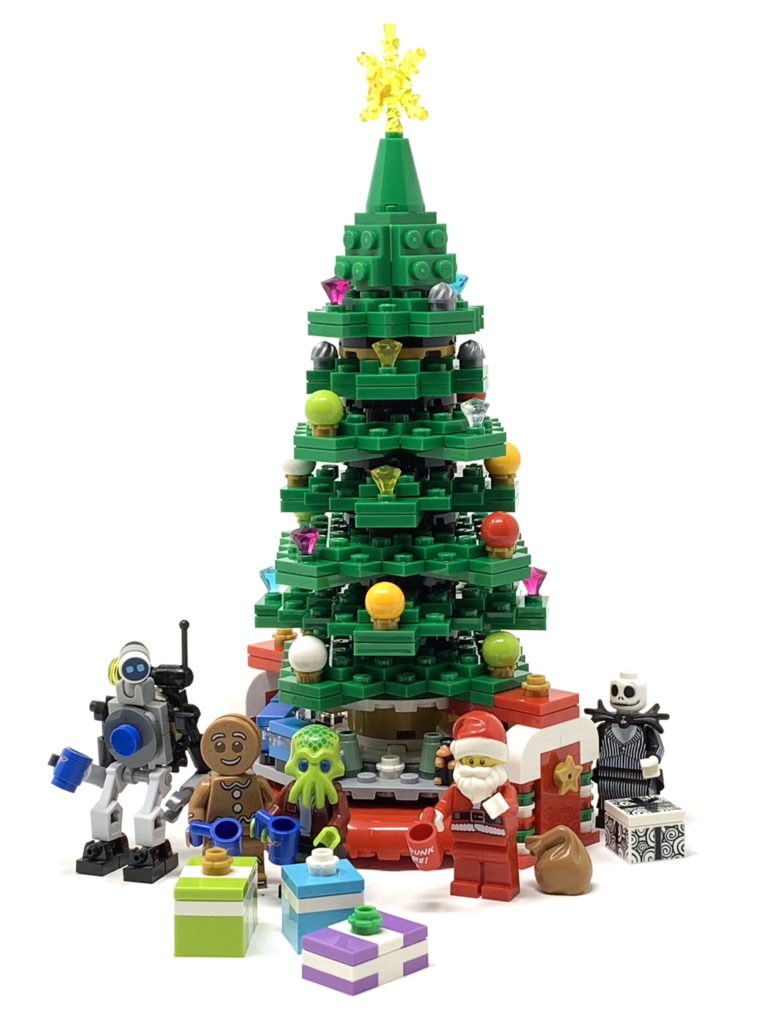