The worldwide pandemic going on right now can definitely cause a lot of boredom. I haven’t seen my friends very often, and most of my days have been a little slow. But one activity I came up with to pass the time combined by enjoyment of the Harry Potter series and my collection of LEGO: Making a miniature picture book to take the reader through the story of the first Harry Potter book with one picture for each chapter. This was a challenge, especially because I don’t own too many of the sets from the newest wave. But using my 2010-era minifigures and (not to brag) a pinch of creativity, I passed many hours working on this project.

SPOILER WARNING: Those that have not read Harry Potter and the Philosopher’s Stone be warned! This article will contain major plot points and brief descriptions of each chapter.

Chapter One: The Boy Who Lived

First chapters are always known for setting the scene and kickstarting the plot in some way. The Boy Who Lived is a fitting title because, of course, we meet the main character. Harry Potter, the Boy Who Lived, is a baby in this chapter, ready to be left on the Dursleys’ front door and raised until he is ready to learn magic. We also get to meet Headmaster Dumbledore, Hagrid, and Professor McGonagall, each of which will have a part to play later on in the book. 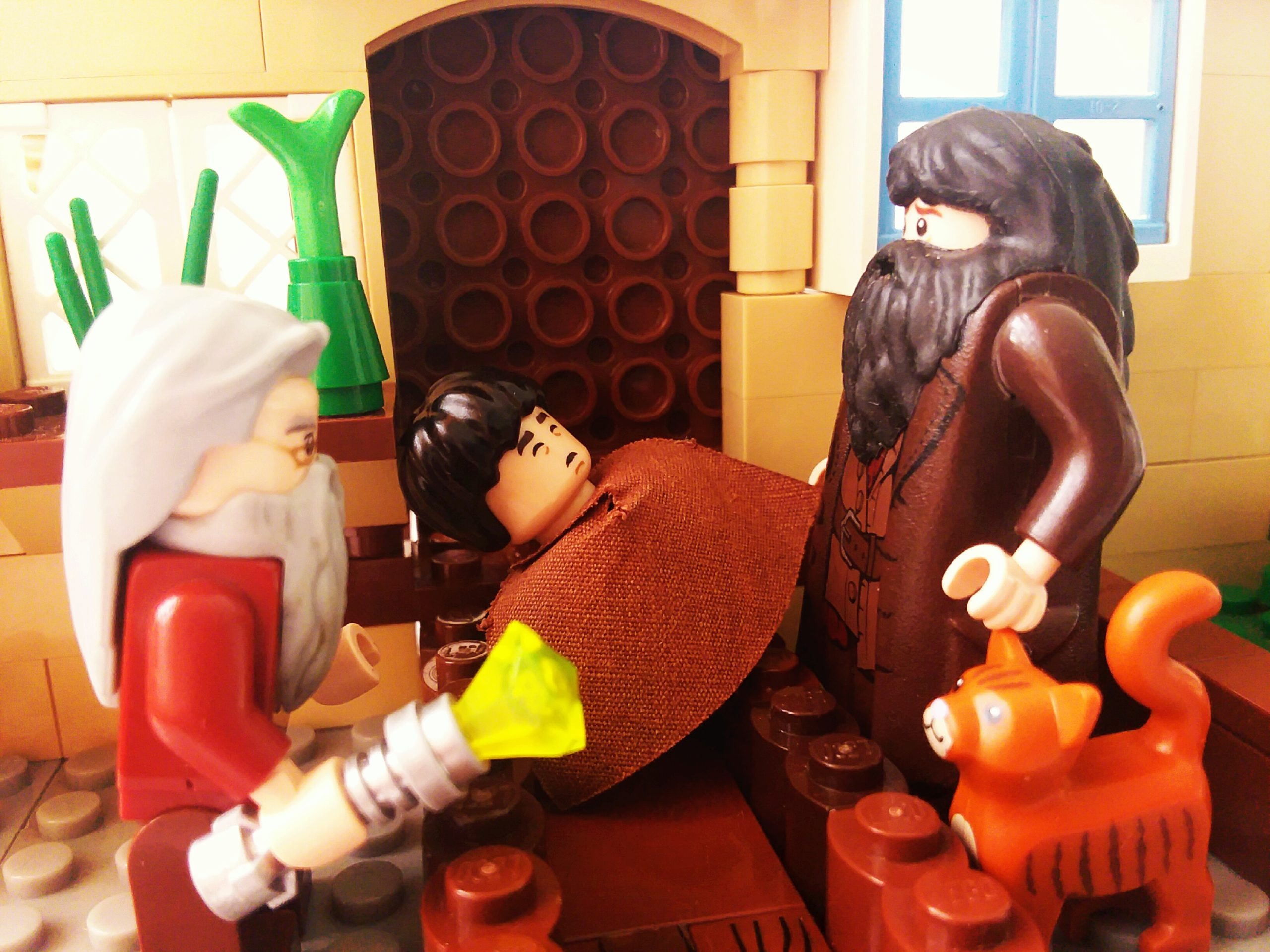 Okay, I have a confession. For this photo I had to use a filter, because of the limitations of my own setting, and the lighting around. I used the filter to try to give the scene a darker look, since it takes place at night. Another trick was making a LEGO baby minifigure, since I don’t own any of the smaller figures. I decided my best bet was to cover the baby Harry in a reddish-brown cloth to leave the nature of the minifigure ambiguous. And if you’re wondering about Dumbledore, the object he is holding is the “Deluminator”, which he used to turn out the street lights on Privet Drive.

Though this chapter doesn’t add much to the overall plot, it does manage to help the reader get to know the characters and themes better in an entertaining way. Harry’s interaction with the snake in the zoo also foreshadows some events of the next book, where (Spoiler alert!) Harry learns that he can speak the language of snakes. Additionally, we see little bits of magic, things Harry can’t explain and doesn’t understand. This will lead to the reveal in Chapter Four that Harry is a wizard. 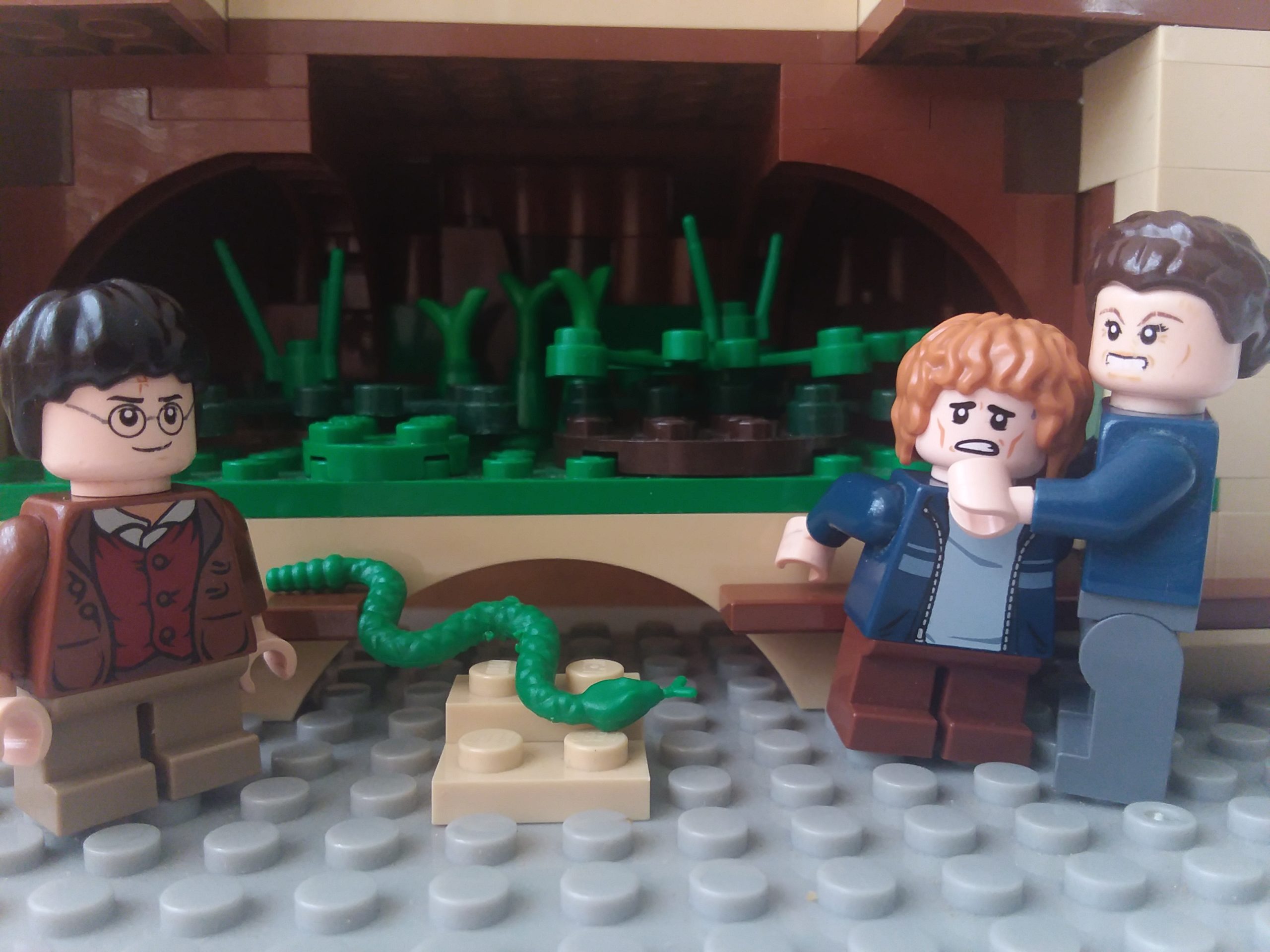 Despite this being the second chapter, this was the first picture I took and the one that began this whole project. Though the zoo exhibit isn’t the most pleasing thing to look on, I tried to give it a slightly exotic look by using green foliage pieces. I also gave Dudley Dursley the blue jacket that is usually seen on Harry’s figure, to show that Harry is receiving second-hand clothes from the abusive Dursley family.

Chapter Three: The Letters From No One

This chapter is surrounded by mystery, because Harry begins to receive letters addressed to him that he cannot read. We, the readers, start to get the impression that the Dursleys know more about the Wizarding World than they let on, but this idea isn’t expanded upon until much later in the series. 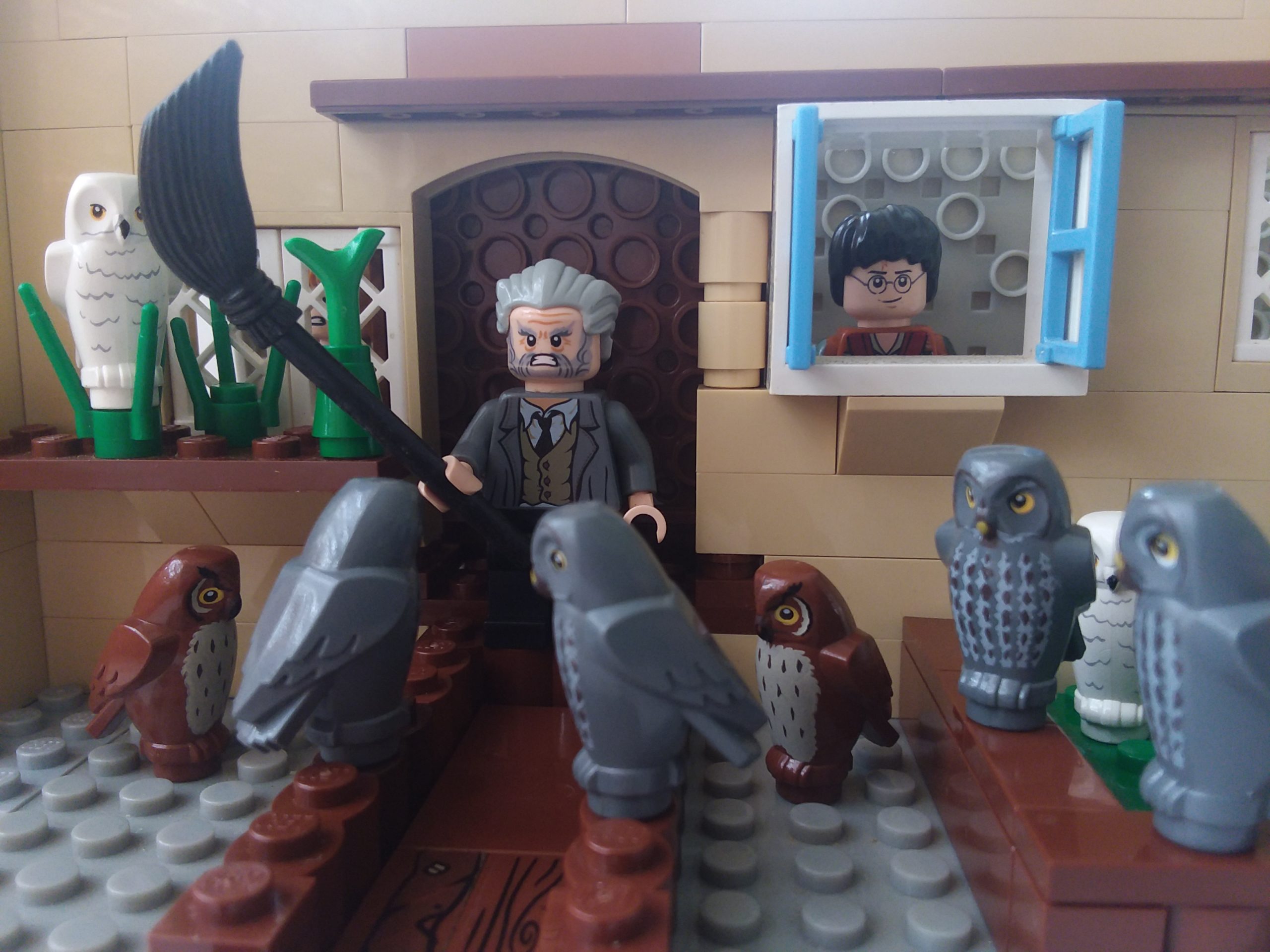 I have the 2010-era Harry Potter sets to thank for the large number of owls sitting outside the Dursley household in this shot. (There were at least three more that didn’t make the final cut!) I also firmly believe that Vernon Dursley’s appearance in the books is most like a real-life LEGO minifigure – a wide torso, stiff arms, and a short neck!

Chapter Four: The Keeper of the Keys

“Are we at Hogwarts yet?”

No, but we’re getting closer! This chapter is the one where Harry finally meets Hagrid and gets his own acceptance letter to the magic academy at Hogwarts. The readers also learn that Harry was lied to by the Dursleys his whole life: Previously, he was under the impression that his parents tragically perished in a car crash. Hagrid finally tells Harry the truth, and releases his frustration on the Dursleys. 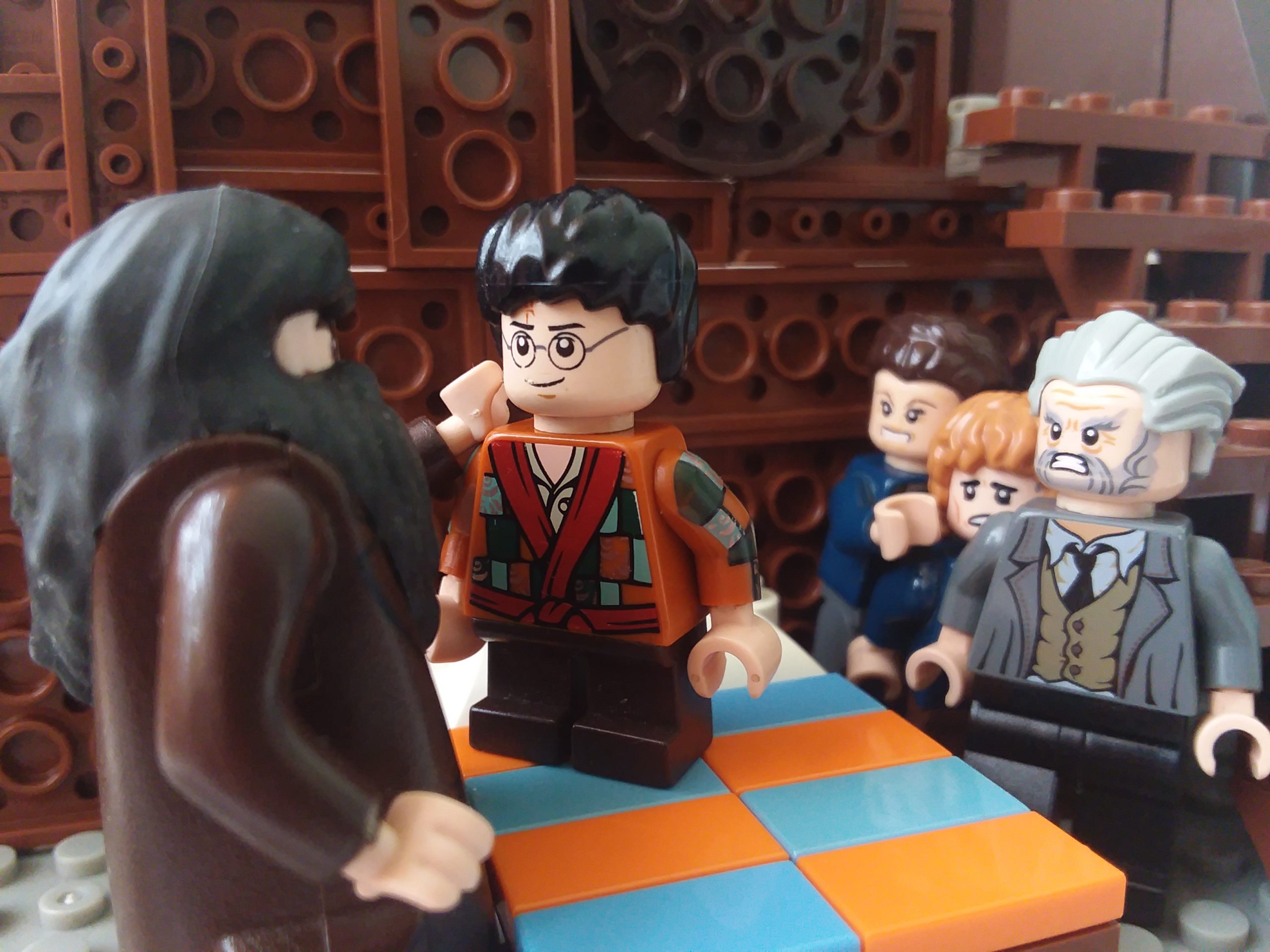 Once again, the Dursley family is terrified and upset. Are they ever happy? Petunia and Dudley can be seen cowering behind Uncle Vernon, who seems a bit unhappy at the intrusion. I also gave Harry some pyjamas to show that it is past midnight. Harry is standing on the orange-and-blue bed so he can be at eye level with Hagrid!

One of my favorite parts of this chapter is the coexistence of the Wizarding World and the real world. The Leaky Cauldron, which houses the entrance to Diagon Alley, sits in London for “Muggles” to see. More of this in Chapter Six! 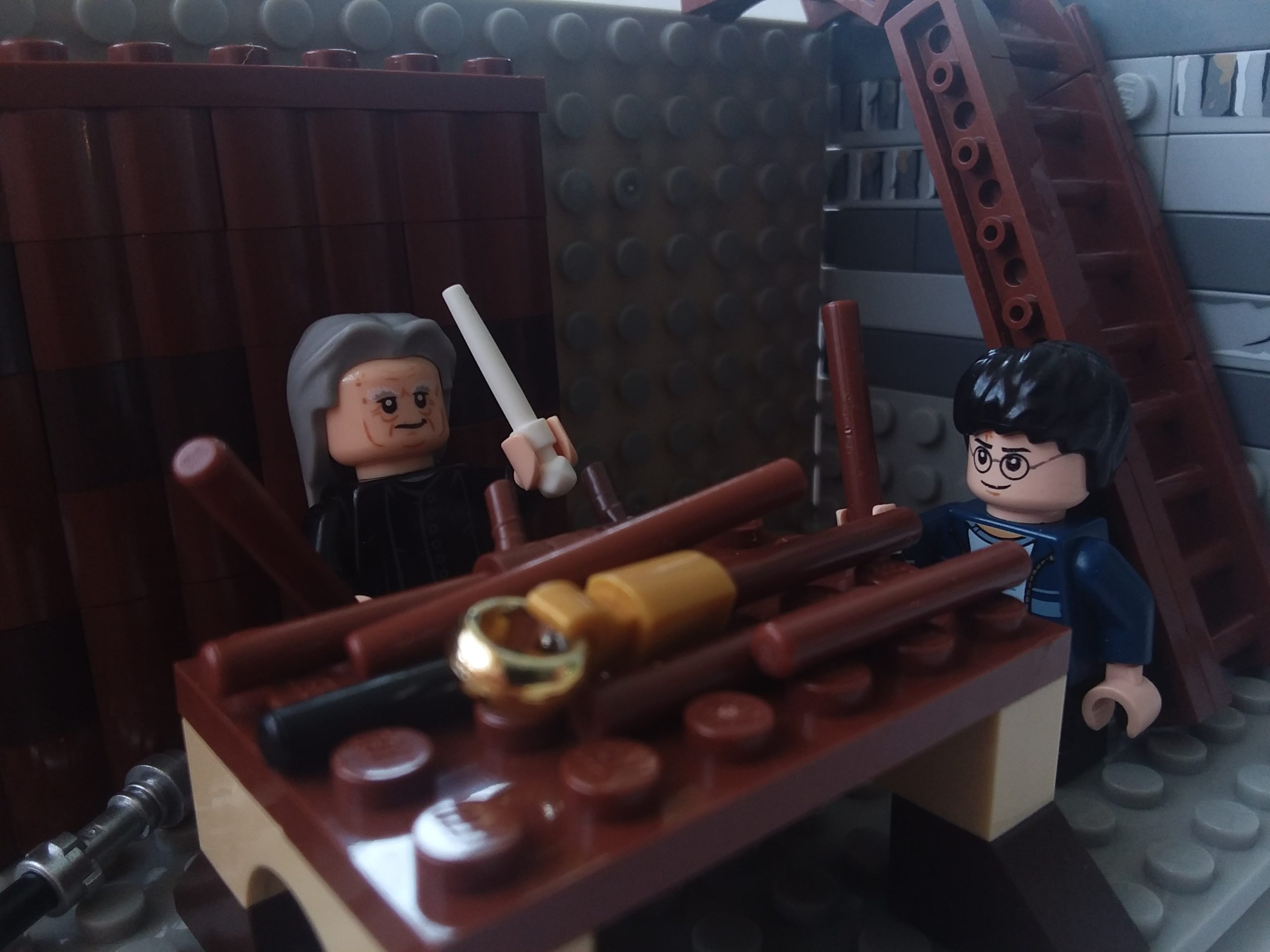 When I was a kid, I always wanted the LEGO Diagon Alley set (10217) from the early waves of Harry Potter sets. Then again, I wanted a lot of things. Though I never got that particular set, which felt like a faraway dream, I should still be grateful for the plentiful sets I did get. I finally had a chance to live that dream when I made Mr. Ollivander’s wand shop. I also included plenty of weird looking wands. One had reddish-brown hand pieces attached to look like little twigs, and another had a gold ring at the end. (The type of wand someone like Draco Malfoy would buy!)

Chapter Six: The Journey from Platform Nine and Three Quarters

“Are we at Hogwarts NOW?”

Nope! But this chapter is my all-time favorite in the book. Harry, a new student at Hogwarts who knows nothing about magic, meets the Weasleys, who know nothing about Muggles. Harry meeting Ron is another important moment because, though they have very different backgrounds, they become fast friends and bond over their anxieties about what Hogwarts will be like. We also get to meet Hermione, but we don’t get to like her yet. 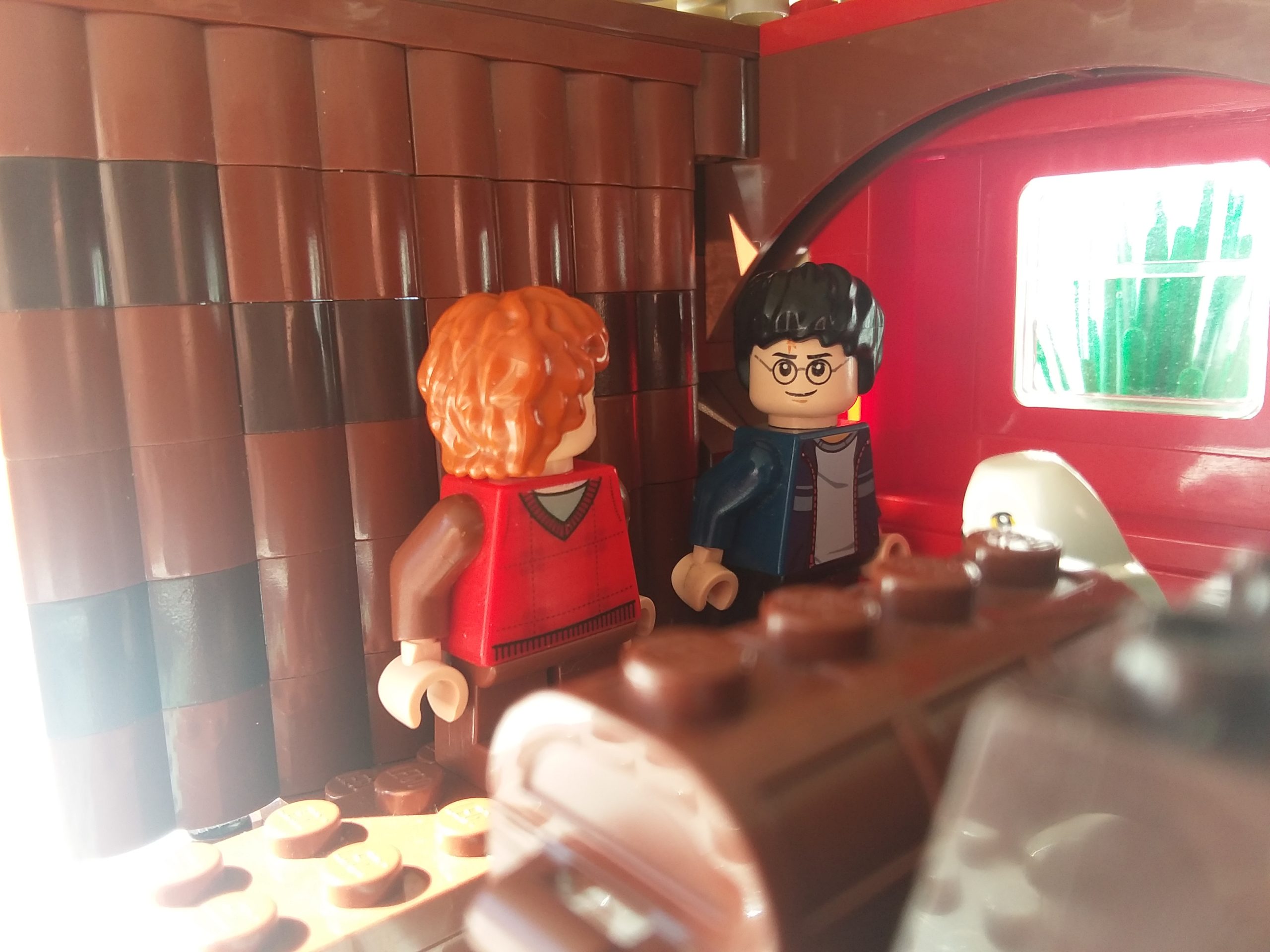 This shot was tricky, because the actual Hogwarts Express set (4841) is far too small to capture a shot in. I took the pieces from the train to make the wall, but even then, it wasn’t done. As soon as I added the compartment wall and a few bits of luggage, the shot was complete. Also, note that Ron’s figure is slightly different from the one in set 4841. This is because I wanted his hair to be a little messy. (He is eleven after all!) If I continue this project through the entire series, each main character will have a progression of minifigure pieces to show them aging and maturing.

Yes, before you ask, we are FINALLY at Hogwarts! Yay! This chapter introduces us to the four Hogwarts houses, and sees Harry, Ron, and Hermione all sorted into Gryffindor, while Draco Malfoy becomes a Slytherin. We also follow Harry up to Gryffindor Tower, where he meets the portrait of the Fat Lady guarding the entrance to the dormitories. 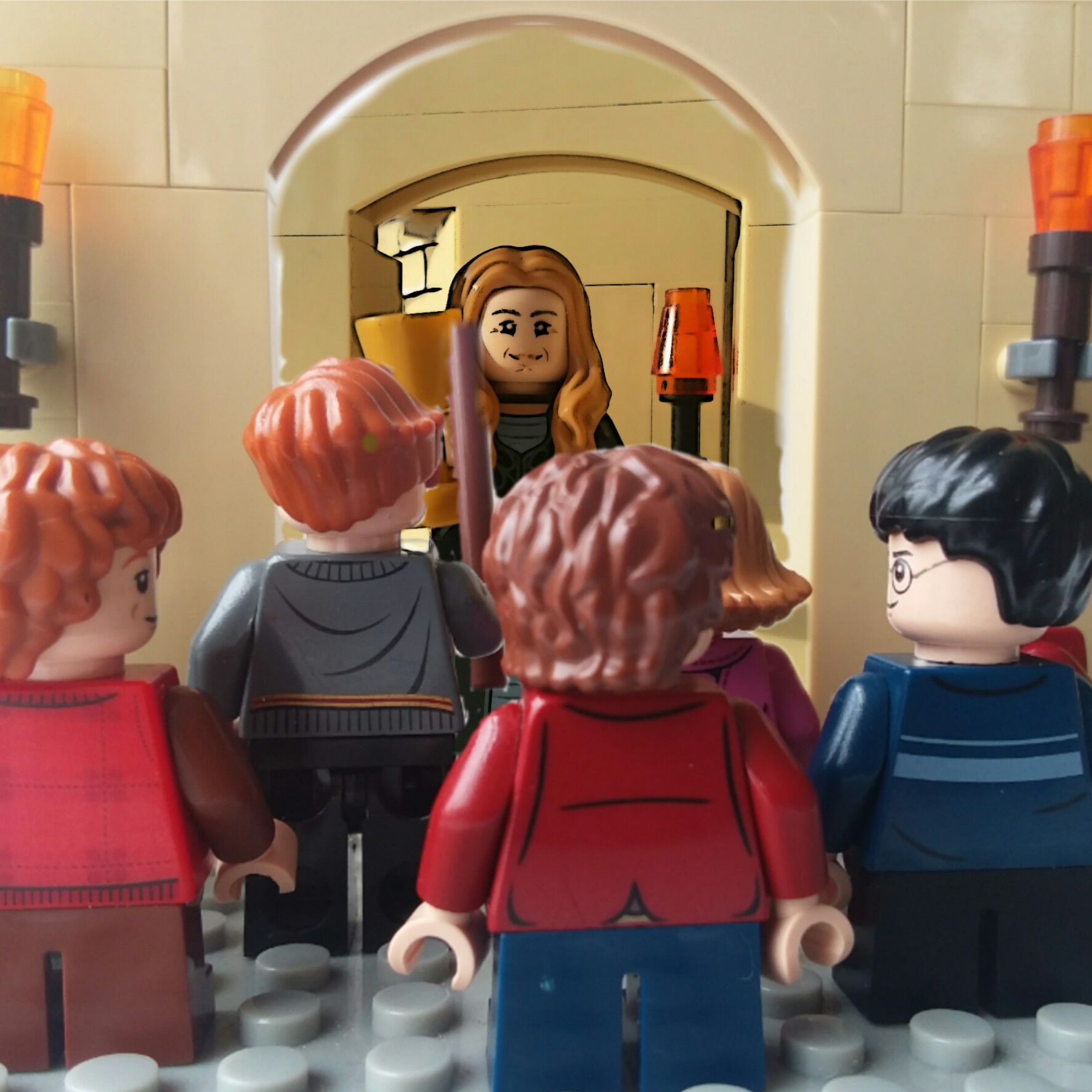 Okay, I have another confession. I used a little photoshop to give the Fat Lady’s portrait a more portrait-y vibe. We also get to see the back of Percy Weasley’s head, and parts of other students who I couldn’t fully fit in the shot. The girl in front of Hermione is supposed to be Lavender Brown, Ron’s future love interest.

This chapter introduces us to not only more parts of Hogwarts, but also the most controversial character in all of the Harry Potter series: Professor Snape. I personally am not a fan of Snape’s, but those who are a fan of his will be happy to see he made it into this shot. There is also more development for Neville Longbottom, a frightened boy who doesn’t seem to belong in Gryffindor House at first. 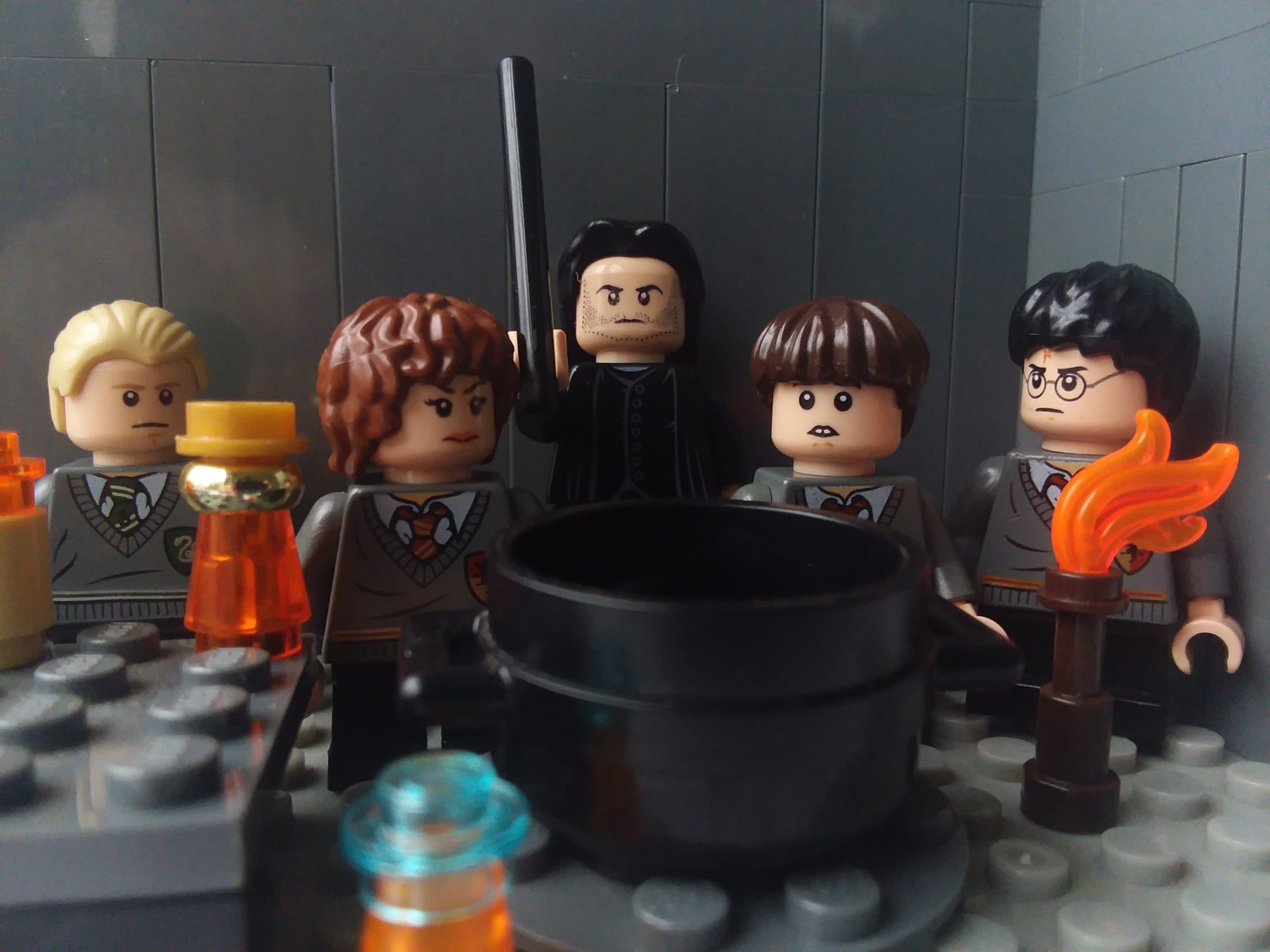 Harry, Hermione, and Neville, all wearing Gryffindor uniforms, are struggling to study Potions, while Snape and Malfoy look on. Since this scene is set in the Dungeons, I made the walls and area grey, while putting a torch on the floor to light the room. There are also several potions scattered around the room, if you look closely!

This article is already running a tad long, but readers never fear! The second half of Harry Potter and the Philosopher’s Stone is already in development, and a second article will come out with the rest of the chapters!

Are LEGO Sets a Good Investment?