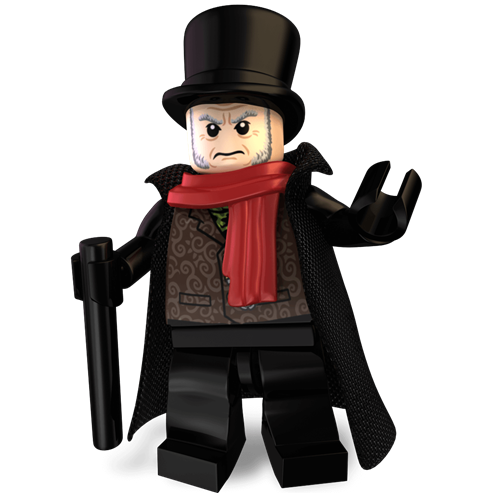 ‘Tis the Season as some would say! Though given that it’s only September, I’d say it’s a tad early to be thinking about Christmas. However, it’s LEGO, so it can be forgiven. Let’s take a dive into the LEGO Christmas sets of past, present and future!

Ever since I first heard about this theme, it’s always got me thinking: How long can they keep this going? After all, there are only so many things that remind you of Christmas, but this set was a good start.

It all started back in 2009 with the release of the Winter Village Toy Shop (10199). An Expert Creator set of sorts which, when assembled, made a small toy shop complete with a large Xmas tree, full of festive trimmings and let’s not forget the presents. 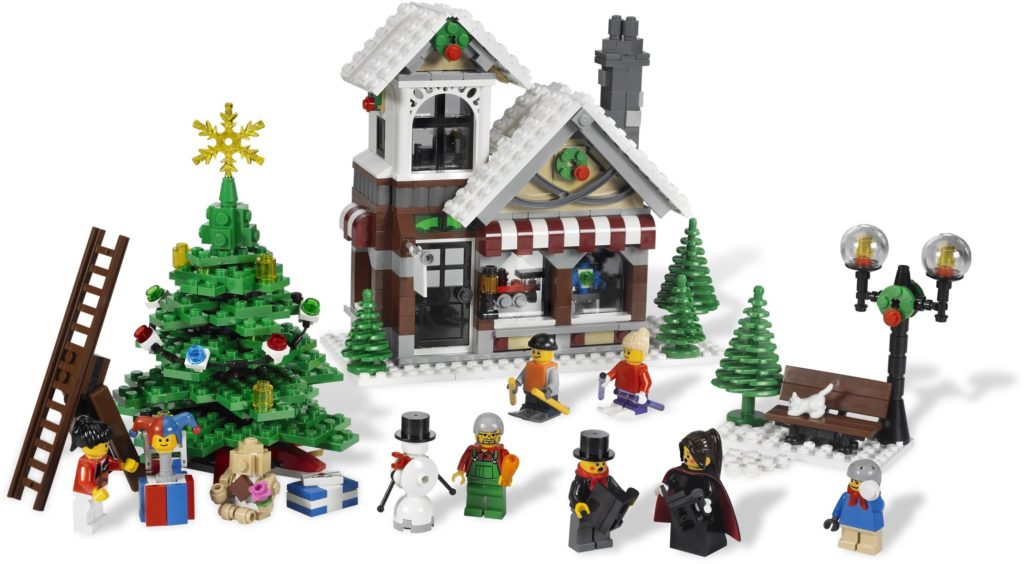 It also came with a special light brick which, when activated, lit up the shop window displaying the toys. The minifigures, too, seemed to have a festive motif with an old-fashioned toy maker, a few carol singers and a couple of adults & kids thrown into the mixture.

Just as a side note: Many of these minifigures are still available online through stores such as Firestar Toys.

Other Sets in the Series

This was the first of many in this new theme. Even though it wasn’t described as such when it was first released, it put LEGO on the path of making a Christmas set for many years to come. At the time of its debut, not many paid this much attention, as some saw this set as a novelty, a one-off, so it was no surprise that it’s release time was limited. By the time sales of this set took off, it was long gone. Many, like myself, picked it up on special order and due to customer demand; LEGO later re- released this set a few years later in 2015 (10249).

A year later, they continued this theme with Winter Village Bakery (10216) released in 2010. This time, the interest in these kinds of sets was starting to pick up. After all, who doesn’t like a LEGO Christmas theme? 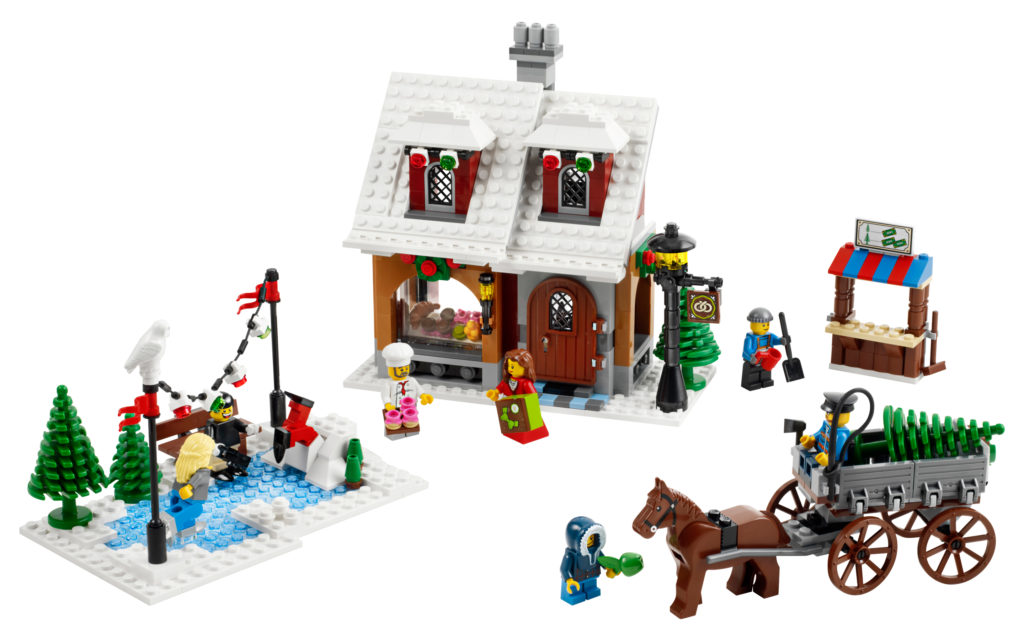 By the time the third set came around in 2011, Winter Village Post Office (10222), things were starting to get interesting. We now had three sets and when put together a picture started to emerge. It looked like this had the makings of a good theme, the only drawback was the fact you had to wait nearly a year for the next release. Fans of this would have to play the waiting game. 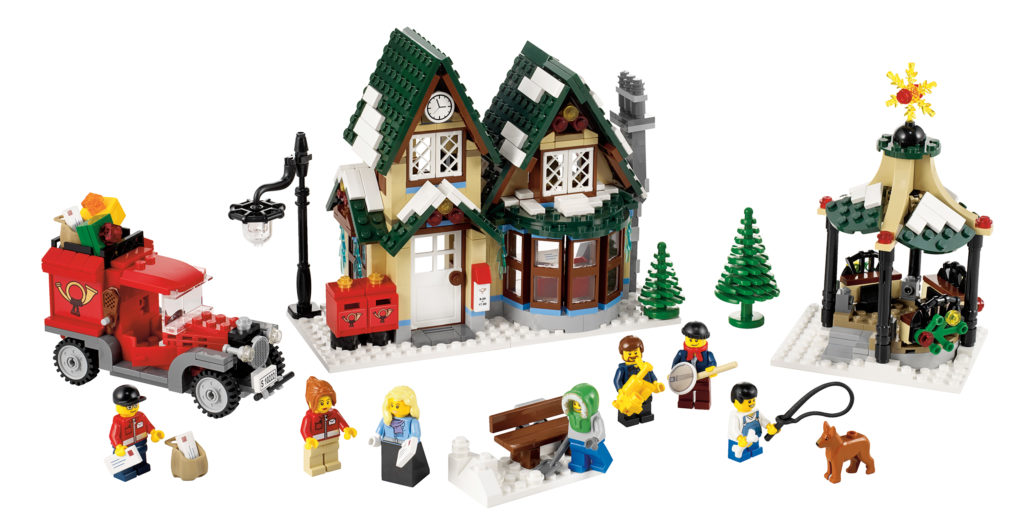 Again, only adults seemed to get this.

Though not every set did this theme justice, like the next set on the list released in 2012, Winter Village Cottage (10229). It seemed to be thrown together with bits & pieces; it also lost some of the magic of the first three.

It wasn’t until the following year with the release of the Winter Village Market (10235) in 2013 that the theme was back on track. I must admit, I liked the fact they included a small carousel as I was a big fan of the original creator version which played music, so its smaller cousin won me over. It also reminded me of Christmas where I lived as every year there would be a Christmas market with stalls and such. 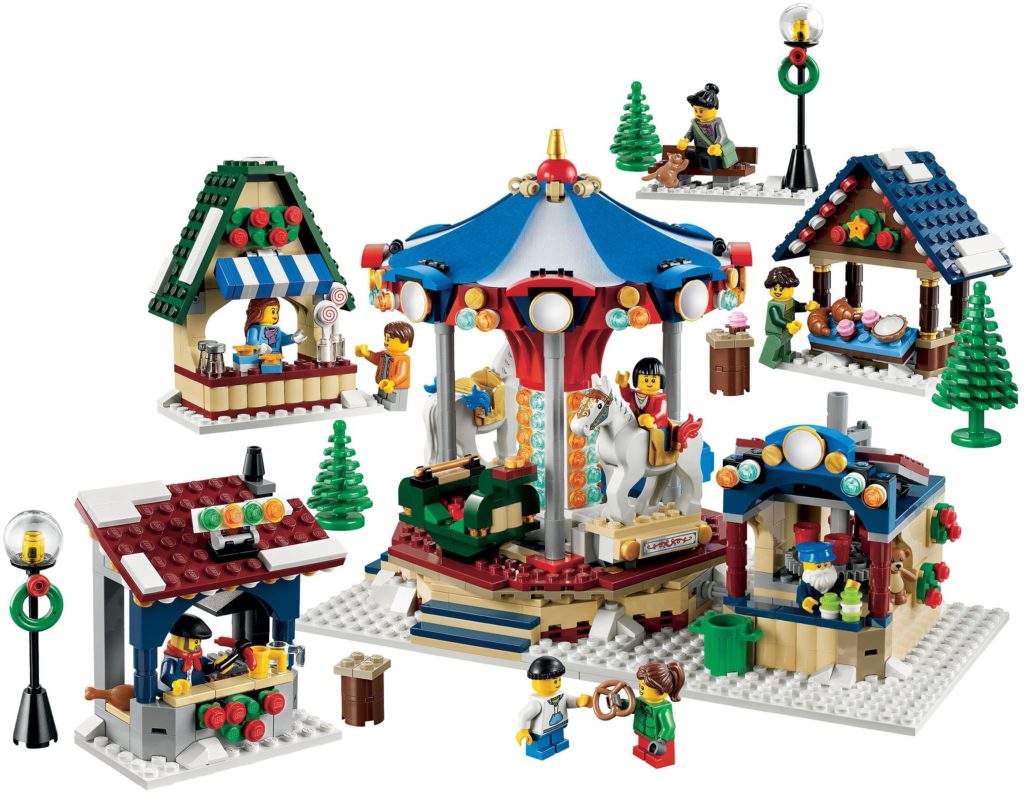 Again, with each set, the list of characters grew and seemed well on track to creating the whole village, all that was missing was Santa.

Well, we didn’t have long to wait!

In 2014, along came Santa’s Workshop. (10245). It was one of the most sought after Christmas presents for that year. It featured Mr. & Mrs. Claus, plus the elves & the reindeer, Rudolf included. It also featured a toy-making machine, which answered many a difficult question that year. 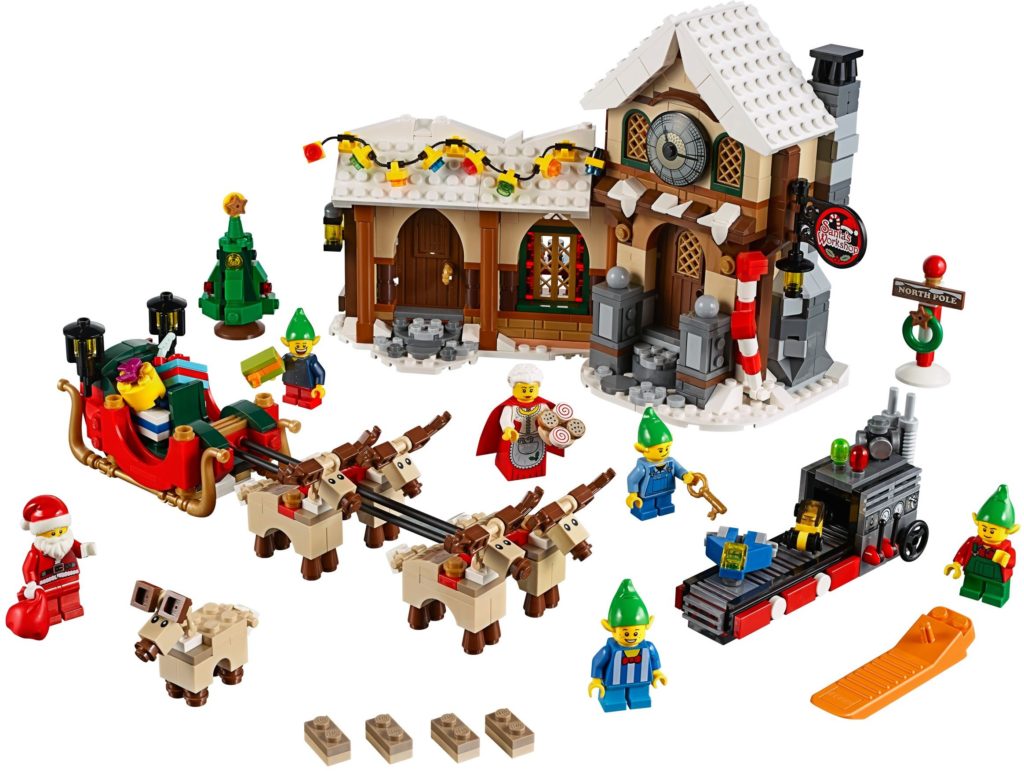 As sets go, it was a very nice set, and yes! I bought one for my daughter, which she still has to this day.

Every Christmas this takes pride of place and even though it’s been a while since the magic has gone, it still reminds her of that morning.

I can’t say that I bought any more sets after this, as by then prices on these sky rocketed and there were better themes out there to get. But saying that, LEGO still persisted and sure enough next Christmas brought both joy and sadness too many collectors that year.

In 2015, we saw the re-release of the Winter Toy Shop (10249). To many, it was a joy to see it again. But to some, hoping for something new, there was disappointment of having to wait yet another year. But it was nice that LEGO finally answered the call as many fans that had missed out its original release. If only they’d do the same for the other early sets, like the post office & bakery… 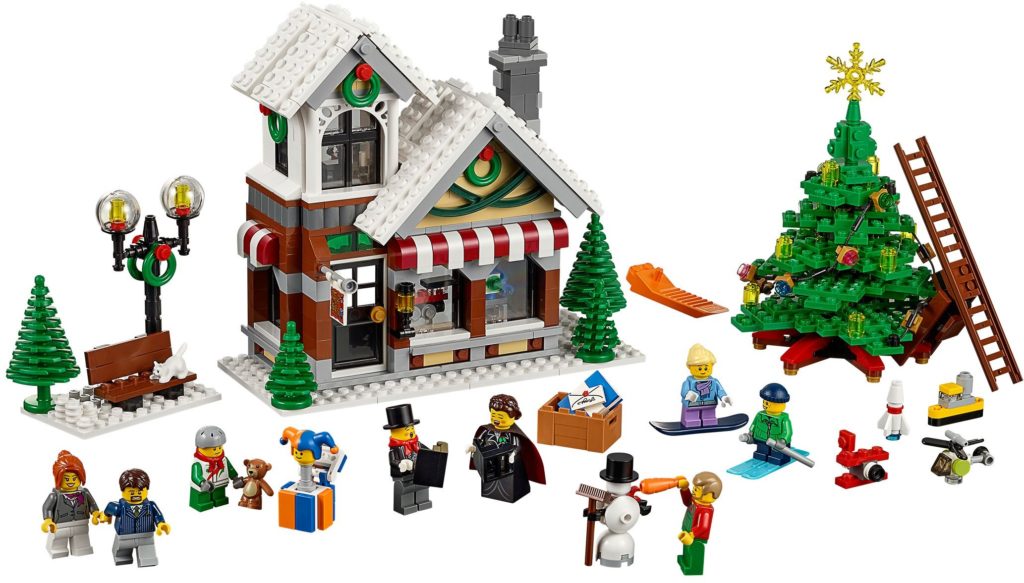 In 2016, many had their prayers answered with the release of the Winter Holiday Train (10254). Finally we had something that moved around the display, but alas, it was short lived. It was an unusual set and the fact that LEGO included the track, but no motor to drive it, proved to be a really bad decision on their part, even though they offered a solution on the back with instructions.

Yet another set had to be bought before this would work. It wasn’t cheap and it was in short supply. Still, it had its moments and if you did manage to get the other bits, it moved very well, and was a nice addition to the village.

But still, I think it would have been better if the motor came with it.

Now what good is a train without a station, and sure enough the following year in 2017, LEGO produced just that. With the release of the Winter Village Station (10259), things were finally coming together, and this proved to be very popular with people who had already bought the train from the year before and were now wanting to add to it. The set came complete with level crossing, train tracks and looked the part. They even included a little bus to add to the fun. 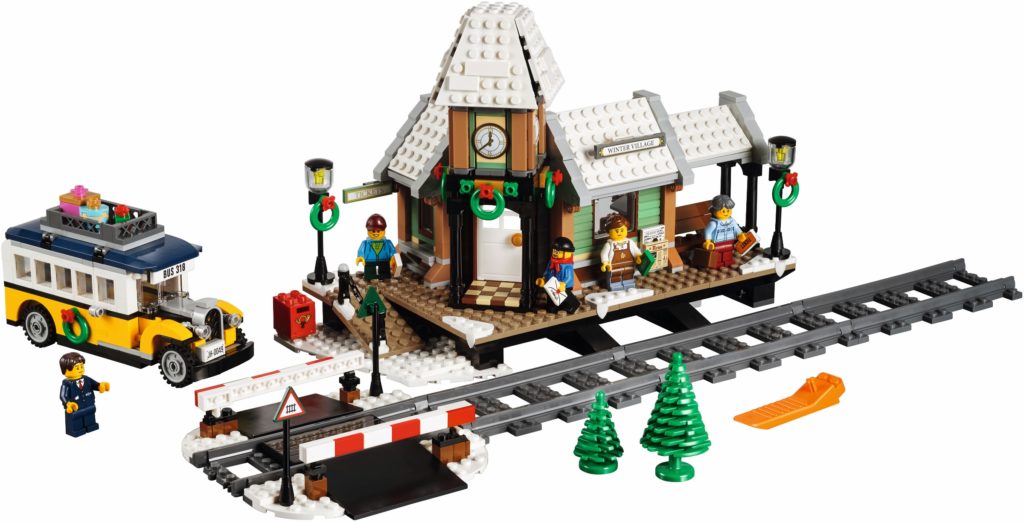 One thing, though. These sets weren’t aimed at kids, they were aimed at adults as most kids would have demolished these in seconds. Perhaps this was why “Expert” was written on the box to deter kids from buying them.

In the years that followed, we had the Winter Village Fire Station (10263), which was a downgraded version of the original building set. It had similar features, and looked very much alike. Even though it wasn’t as big, the set had plenty going for it, in that it had many good figures such as the old time fireman and captain along with a fountain. The only disappointment was that the fire truck could have been better built but its size was right for the set. 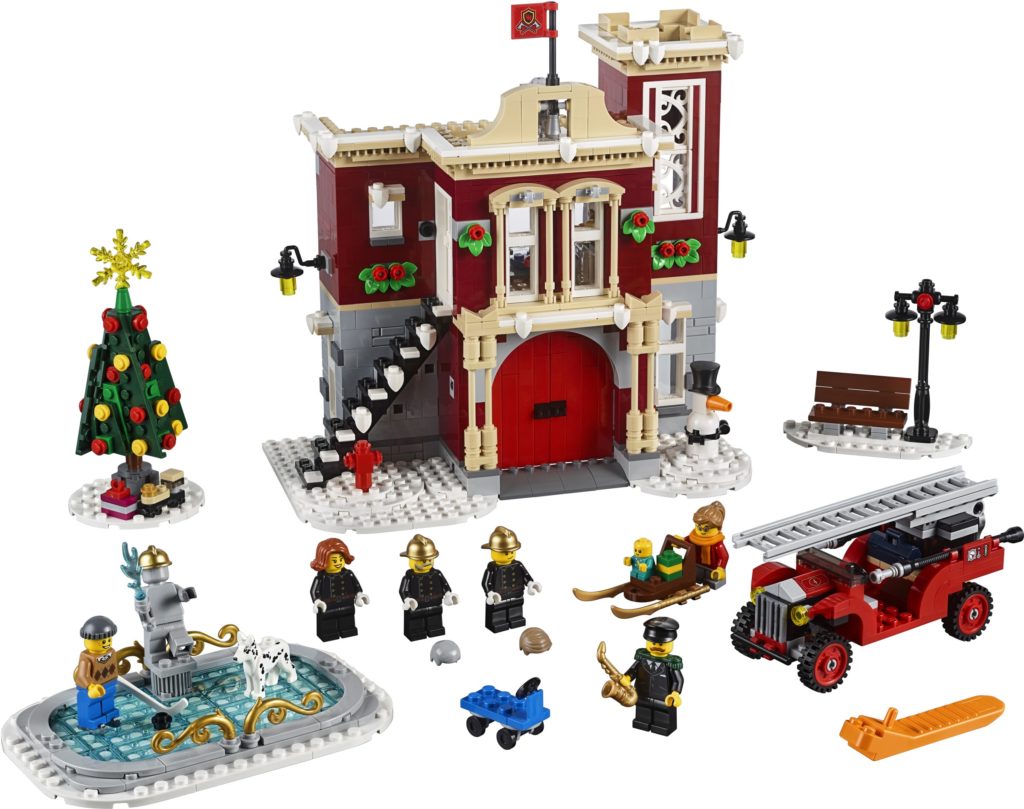 Which brings us up to date with the present, and on September 2019 this year’s Christmas theme release.

This year’s LEGO Christmas set is the Gingerbread House (10267). It may not be everybody’s cup of tea. A smaller version was given as a freebie a few years ago, but this is quite larger. It also has a lot more detail, and while I don’t see this as part of the village sets, it still is a nice addition. It comes complete with Gingerbread parents and baby. 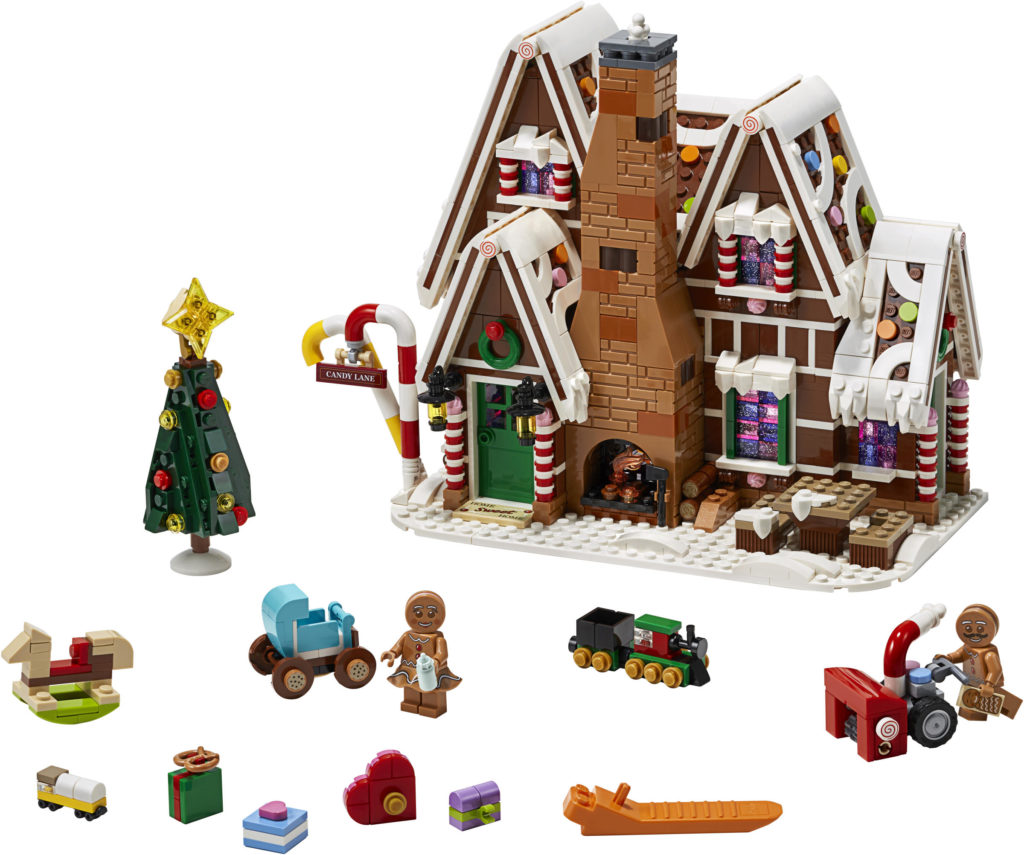 Back to the beginning

Which brings me back to my original question, how long can they keep this theme going? Is there is a limited number of sets which can be added to this? Ever though there are some, I’m not sure they will.

One such example is the Old Church, would LEGO make one? In this politically correct world, would it be against company policy if they did?

A nativity scene? After all, it is what we celebrate Christmas for.

Or failing that, Santa’s Grotto and having your kid’s photo taken. Now what parent would not enjoy that?

Or an old schoolyard, with kids leaving it for four whole weeks! (It would certainly bring back memories?)

Though my money’s on either the old butcher’s or the grocery store, getting the turkey and a bottle of plonk etc.

Aah Christmas… Where would we be, without trying to get this year’s latest LEGO Christmas set.

But if all else fails there is always the Advent Calendars. I hear this year Harry Potter’s the one to beat?