When the LEGO Group announced back in November 2018 that Blizzard Entertainment’s massively popular Overwatch game would be converted into sets, it surprised many. This was an unusual step for LEGO since Overwatch is primarily a combat game, but the violence is more cartoonish with no realistic wounds or death, and even comes with a rich tapestry of stories to draw inspiration from. So, Blizzard and LEGO got together and hammered out a deal. The sets were released in January 2019 and by all accounts, the first wave sold well enough to warrant two additional sets which went for sale in October, one of which is the LEGO Overwatch Wrecking Ball. The focus this time is on the Australian setting of Junkertown, a place that hadn’t been touched on in the previous batch.

Wrecking Ball features a fan favourite, Hammond. The genetically modified hamster who escaped the Horizon Lunar Colony at the same time as Winston, and crash landed in Australia. In order to make ends meet, he turned his escape pod into a battle mech, and took part in brutal competitions in the Scrapyard Arena, hoping to earn enough to venture out of the Outback. See what I mean about Overwatch having a cartoon feel? They have a hamster rolling his ball into combat, taking down enemies and becoming champion. Are you not entertained? 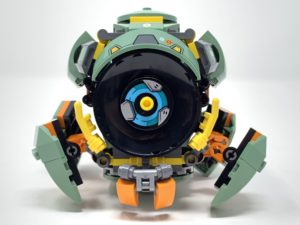 At 227 pieces, the build is a relatively small one. In fact, it’s the third smallest after set 75970, Tracer vs. Widowmaker, and 75971,Hanzo vs. Genji. And surprisingly, it’s even cheaper than the latter. Don’t let the piece count and price point fool you though – this ball packs a punch.

It’s an interesting construction – the build process isn’t complex, in fact it feels quite simple as you assemble it, and it’s fascinating to experience how the designers managed to replicate the in-game mech with so few bricks.

It’s also nice to see a good number of pieces produced in sand green. We don’t see it very often, so it’s a nice change. 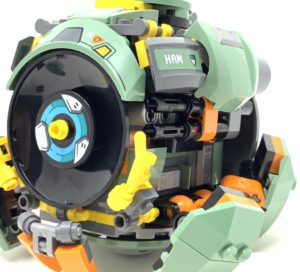 Quite a few play features have been packed in as well: the cockpit can open and close; you can place Hammond in Wrecking Ball and have him either at the top, overlooking the situation, or, with the turn of a technic piece, lower him inside the machine. The twin guns, along with their ammo containers can extend and retract. The legs are articulated; and you can close everything down and roll the mech around. It’s surprisingly sturdy for a LEGO model.

There’s a cover for the mech’s front eye which you should put on when in ball mode. This is to replicate the game version where metal sheets rotate into position to protect that front contraption as it rolls around. Since you can’t recreate that on such a small construct, this feels like an acceptable compromise.

LEGO Overwatch Wrecking Ball does come with a few stickers – but to be fair, as someone who loathes stickers, there aren’t that many and two large circular pieces are printed, thereby sparing us all the horror of having to place a sticker on a spherical object. 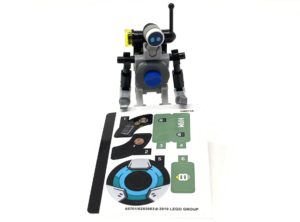 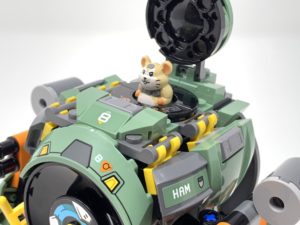 This set doesn’t actually come with minifigs – but it does come with the representation of Hammond.

We’ve had hamsters before in LEGO, but they’ve all come from the Friends line (the Heartlake theme, not the TV Show version!). But this is something else. Hammond is taller than his cutesy counterparts, yet he’s still pretty small next to a minifig, being a little over one brick in height.

However, just like his mech, good things come in small packages: Hammond is a triple moulded piece and exquisitely detailed, right down to his little tail. He wears a backpack and sports a pretty fierce expression.

Being so small, he has no movable parts, nor can his hands hold anything, but despite these limitations, I feel they did an incredible job bringing him into the LEGO world.

For a set this good, I do have a couple of nitpicks. One of them I found when taking photographs of it: it isn’t that easy to get the mech to stand straight. This is because each leg is on a ball joint which has a surprisingly large freedom of rotation. This means getting all four legs to touch the ground without the mech tilting in some way, or have one of the legs off to the side too much, or even off the ground completely, can require a few goes to get it right.

On the plus side, you can pose LEGO Overwatch Wrecking Ball in quite a few positions. But the negative side is it can sometimes get frustrating when you just can’t get the legs to behave as they should.

The other nitpick is the same one I had for set 75973. Just like the D.Va and Reinhardt mechs (well, one is an armour more than a mech, but you know what I mean), their scale is disproportionate next to the minifig Overwatch heroes.

It’s definitely not a deal-breaker and it’s fully understandable considering the limitations of the medium, but it is jarring when comparing the final product to its dimensions in-game. 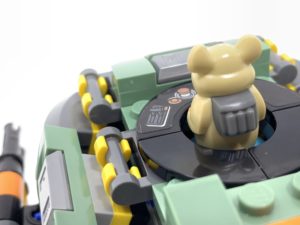 LEGO Overwatch Wrecking Ball is a very welcome addition to the theme. It’s great to be able to add a new hero to the collection, and what an unusual hero he is.

The mech itself is very well built and has an amazing amount of play features built in. In fact, this set is one of the few that strikes a perfect balance between being used either for display or for play.

It’ll look great on your desk, just as it will on the battlefield.

A novel construction or an original and unusual mech, with a finely detailed pilot at its helm. If you’re a fan of Overwatch, or mechs in general, there’s a lot to love in this little set. 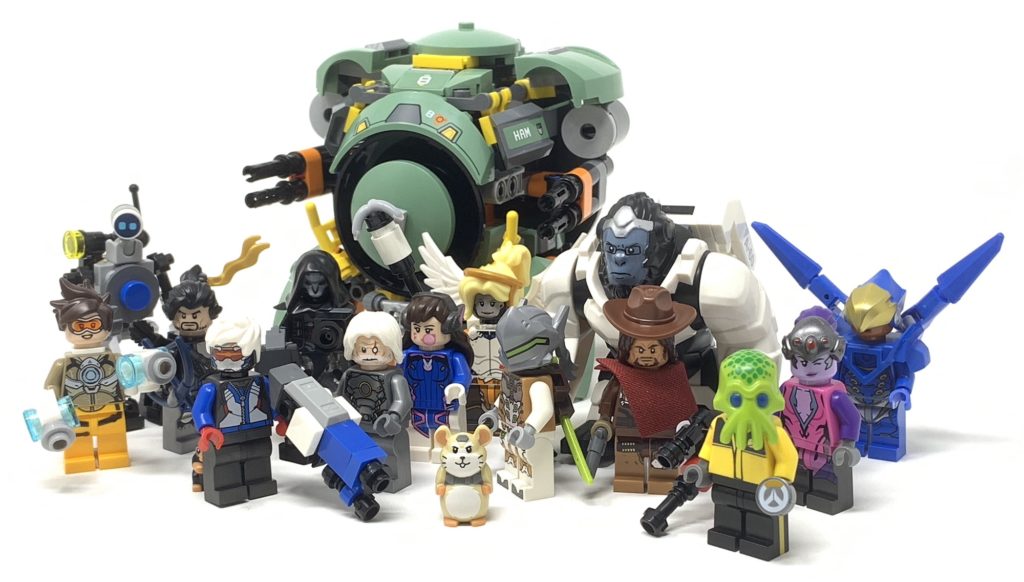 If you want to see how the model is constructed, have a look at this QuickBuild video: