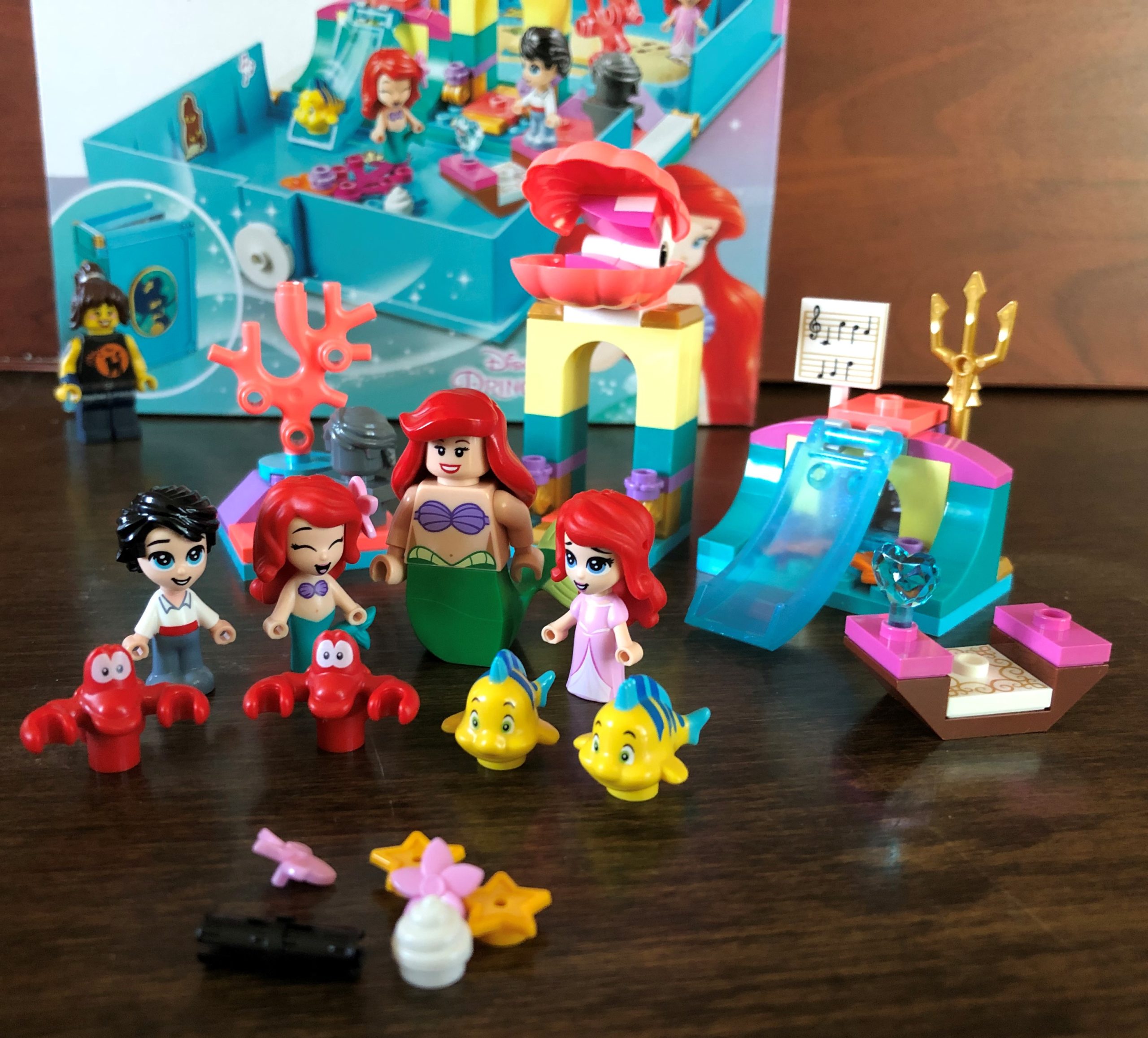 A few days ago, fellow blogger Alan reviewed a set from LEGO’s newest theme: Storybook Adventures. Well, it’s about Disney Princesses so you know in your heart that one review is never enough! That said, today I will be looking at Ariel’s Storybook Adventures and sharing my thoughts with you.

Before I start, though, here’s a quick recap. So far, there have been four Storybook Adventures sets released. Mulan’s, Anna and Elsa’s, Ariel’s, and Belle’s. Personally, I was torn between getting Mulan and Ariel. The Little Mermaid was the first Disney film I ever watched, and I remember getting in front of the mirror and trying to sing the songs as if it was yesterday. On the other hand, I was in my teens when I watched Mulan, and the idea of “not waiting for your knight in shining armor to come and save you” very much suited the way I thought, even back then. In the end, however, I caved. No matter what, Ariel would always be my favorite princess, and it would be fitting to start my collection with her.

The Box and Its Contents

For such a small and simple set, the box is a little big. Still, it’s beautifully designed with Ariel’s pictures on the front and back, along with the books of other princesses. Inside, there are two sticker sheets (one of which I avoided using :)), one page of instructions, and of course, the parts. 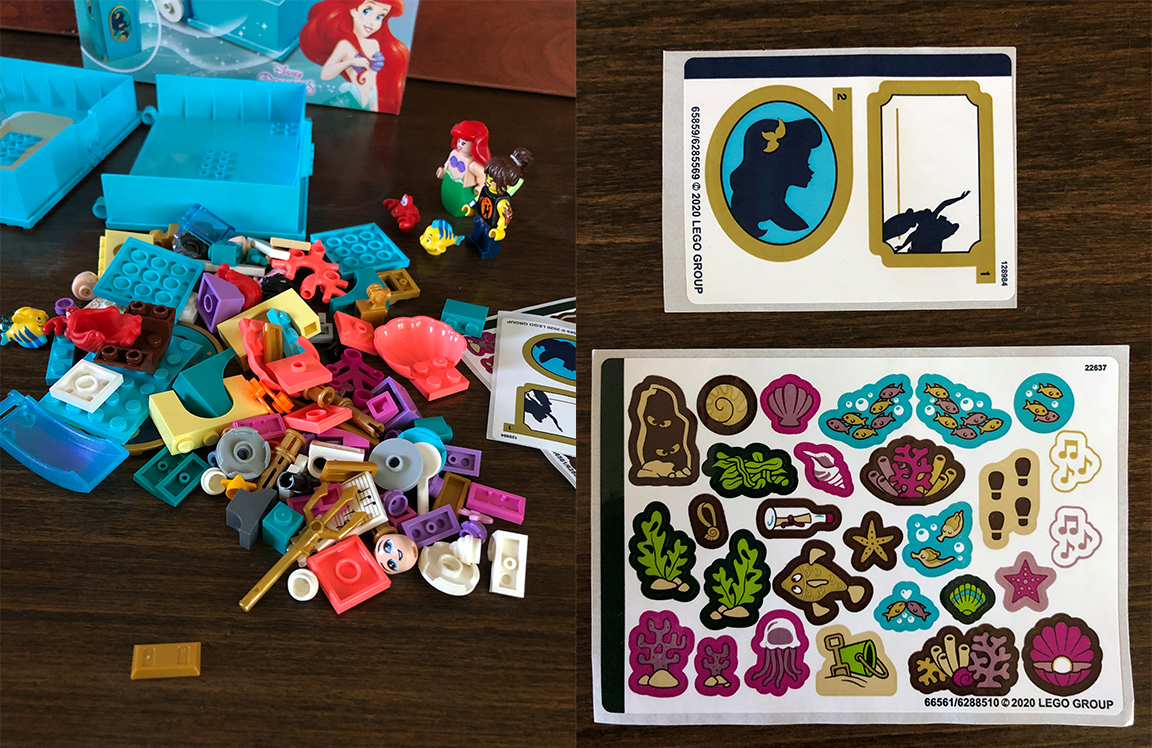 I started with the box – a.k.a. the book itself. After reading Alan’s review, I was very curious about it. Also, hinged systems used in LEGO sets have always interested me. This one, though simple, was very well designed. There were two pieces for the front and back of the book, and one for the spine. They are held together by four Technic pins, and of course, very easily opened and closed. Wait, scratch that. There’s a little “lock” in between as well, and the book can’t be opened when the lock is, well, locked. It provides an extra level of security, and prevents the contents of the book from falling out, not to mention looking cool. 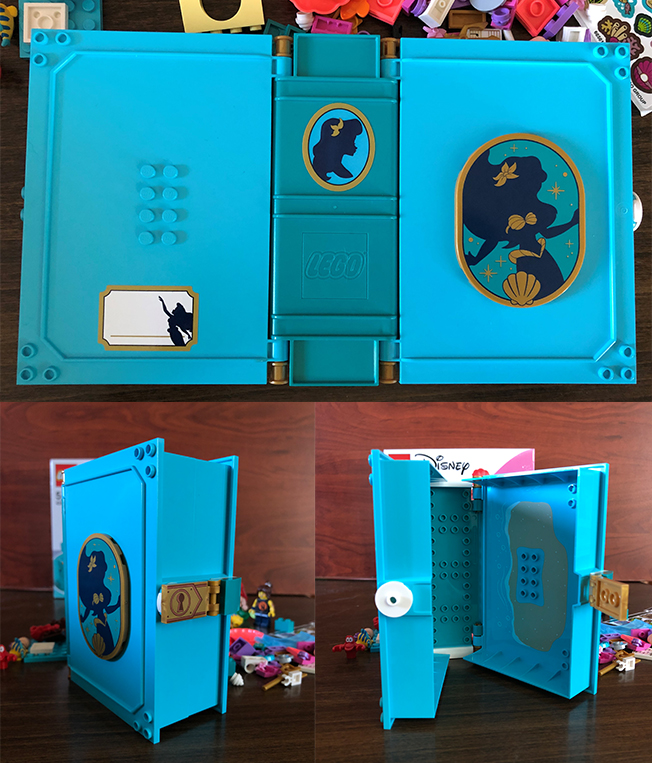 On the cover of the book, and it’s common for all the storybook sets, is an oval piece with the princess’ silhouette – in this case, Ariel. The sticker for the spine is similar, but this time it’s the bust of the princess. The back also has a sticker with Ariel’s silhouette on it. I have a feeling that it’s for something like “This book belongs to ………”.

Inside, there are two parts to play on: The sea and the beach. While lack of studs does make it hard for minifigures and parts to stay still, I doubt anyone who gets the set to play with would care. You can use the various stickers to add little details and make the “playground” richer. Footsteps on the sand, a few school of fish, musical notes, even Flotsam and Jetsam can be found within the stickers (for those who don’t know, they were Ursula’s eels). 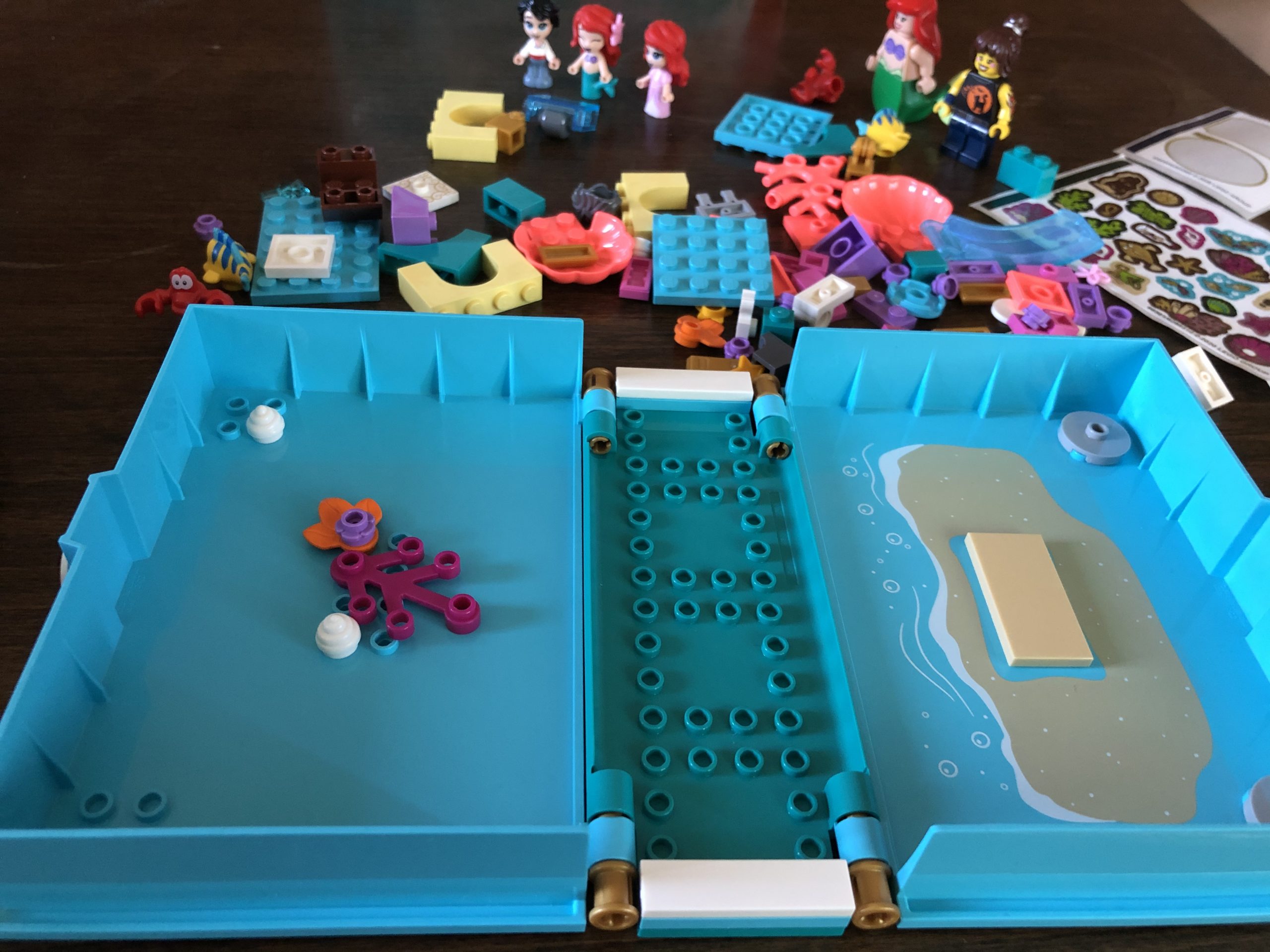 Like I said, you can use them to make the book livelier. I avoided them on purpose because, you know, who really likes those stickers anyway??

There are four little builds inside the set. Honestly, I can’t say specifically what they are – maybe it’s time I watched the Little Mermaid once again. However, all of them have small details from the film. We have one with Prince Eric’s bust, one with Triton’s trident and some musical notes, and one with a slide and a huge clam. The fourth one, which is the only one that doesn’t stick anywhere according to the instructions, is the boat where Ariel and Eric had their romantic date (where Eric failed to “Kiss the Girl”). Despite the little blue transparent heart and the minifigures, I didn’t get that it’s a boat at first. However, once you look at it that way, it makes sense. I mean, the scale of everything is small, why not the boat, too, right?

Ariel’s Storybook Adventures set comes with five figures. Three of them are micro-dolls, the newest form of minifigures, and two animals, Flounder and Sebastian. The design of the animals is the same as the ones released with the mini-doll sets. They were already pretty spot on, so not changing them was a good call.

Now comes the best part: The micro-dolls. These new figures are about half as big as the mini-dolls, and use the same heads. The whole figure consists of three parts: The hair, the head and the body. Unlike the mini-dolls, the body has no articulation at all. Also, the hands are smaller and while there’s a hole in the middle, I doubt it would be easy for them to hold anything, at least for now. Personally, I don’t see this as a downside. They’re like little pawns to play with or to display. While it’s a huge plus to have interchangeable parts, decreasing the scale prevents that and at the same time make the figures way much cuter (think about the micro-figures, the nano-figures, and the babies!). 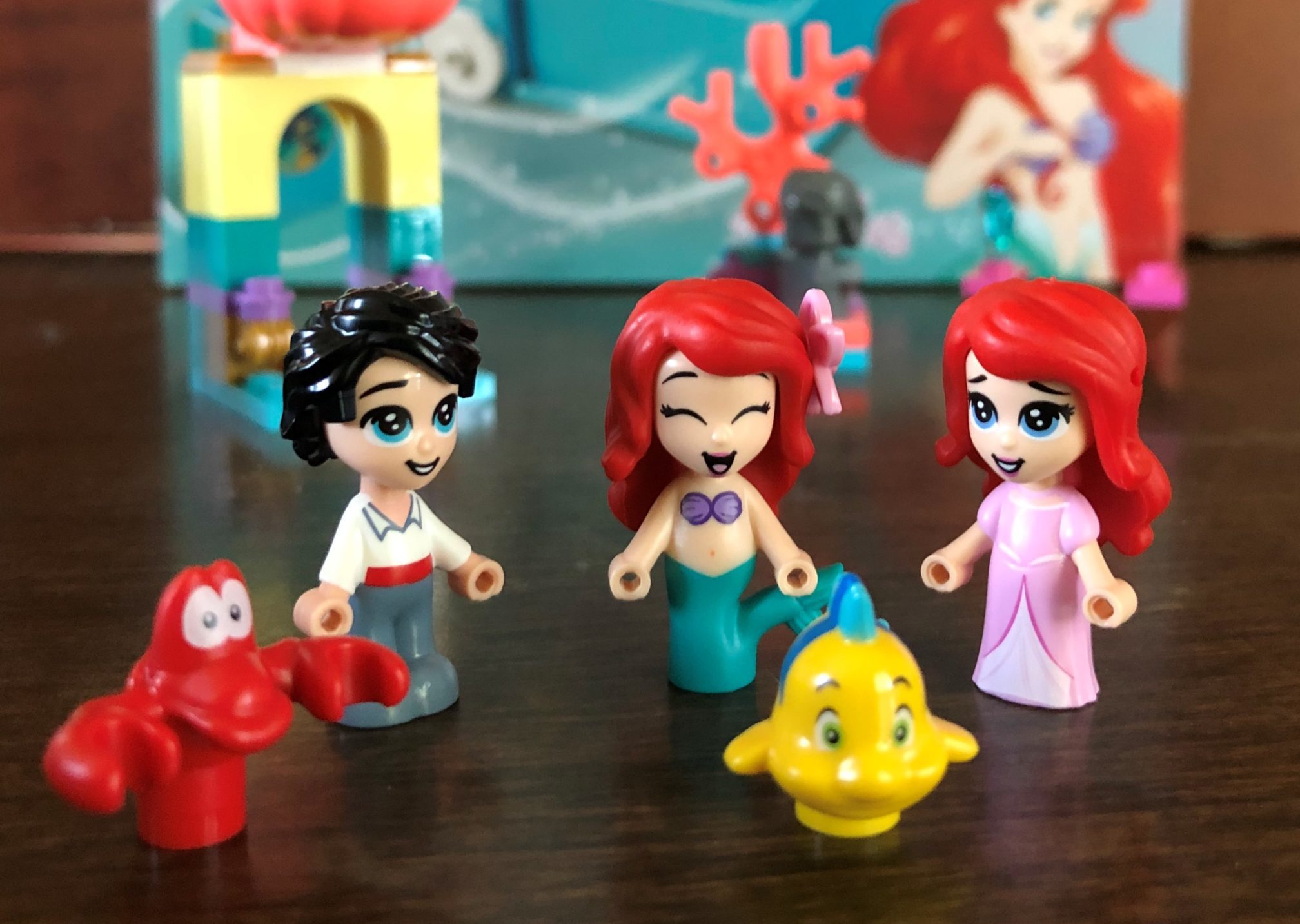 Right, so we have three micro-dolls. Prince Eric, Ariel in mermaid form, and Ariel in human form. The expression of mermaid Ariel is incredibly cute, and like Alan mentioned, very much like chibi style. While I really like Disney Princesses, I have always avoided their mini-dolls. Seeing the micro-doll version of Belle next to her mini-doll version made me realize why: The mini-dolls’ faces look too realistic. These ones, on the other hand, look like cartoons, and better to my taste. 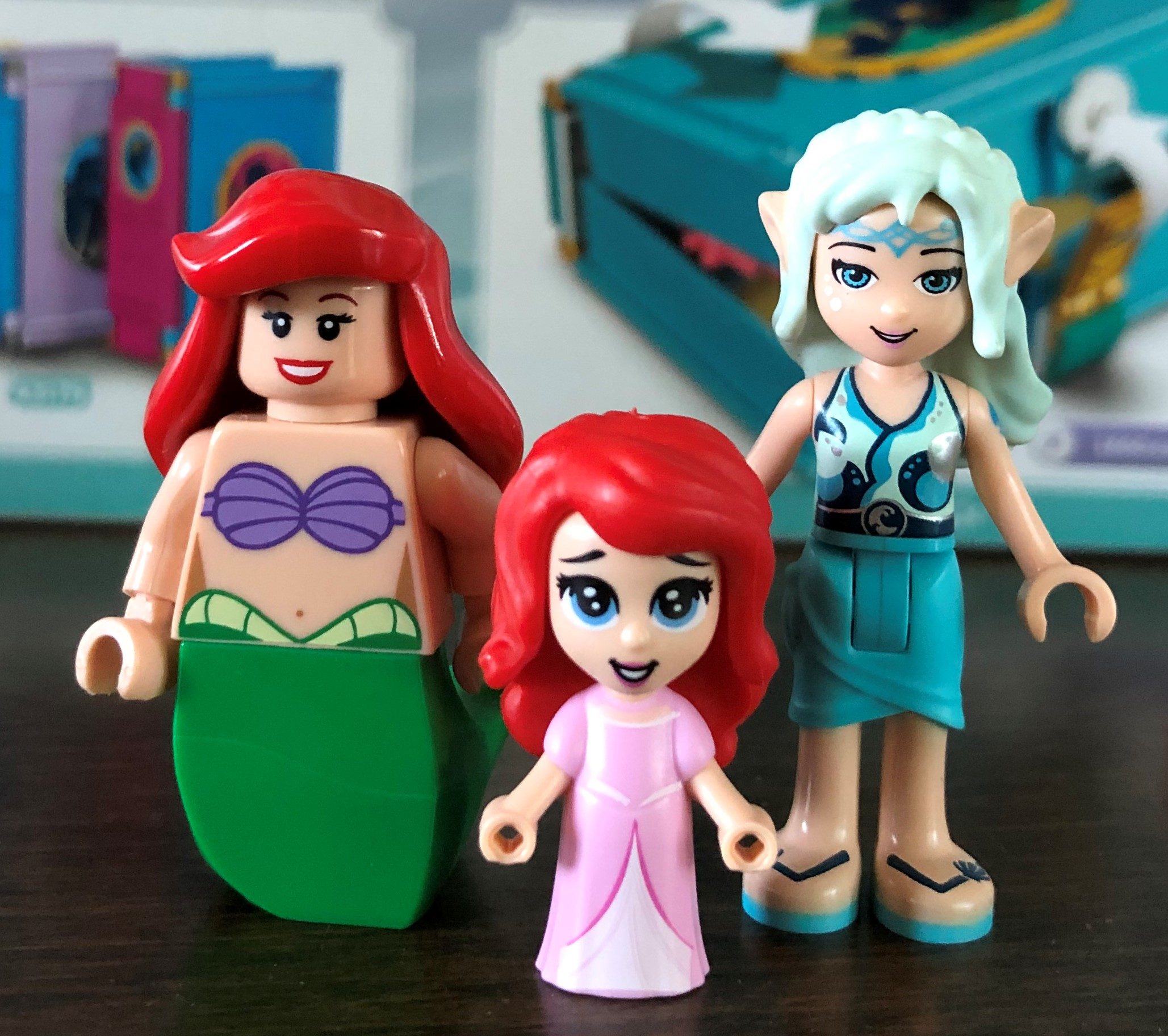 The set is filled with the beautiful new coral-colored parts. Since its release last year, it has become one of my favorite colors and I was more than happy to see it used in different parts, the huge clam being one of them. The use of turquoise is spot on, as well. According to New Elementary, the color of the slide is new for 2020, called Transparent Blue Opal. I’m sure there will be many more surprises waiting for us in the sets to come… 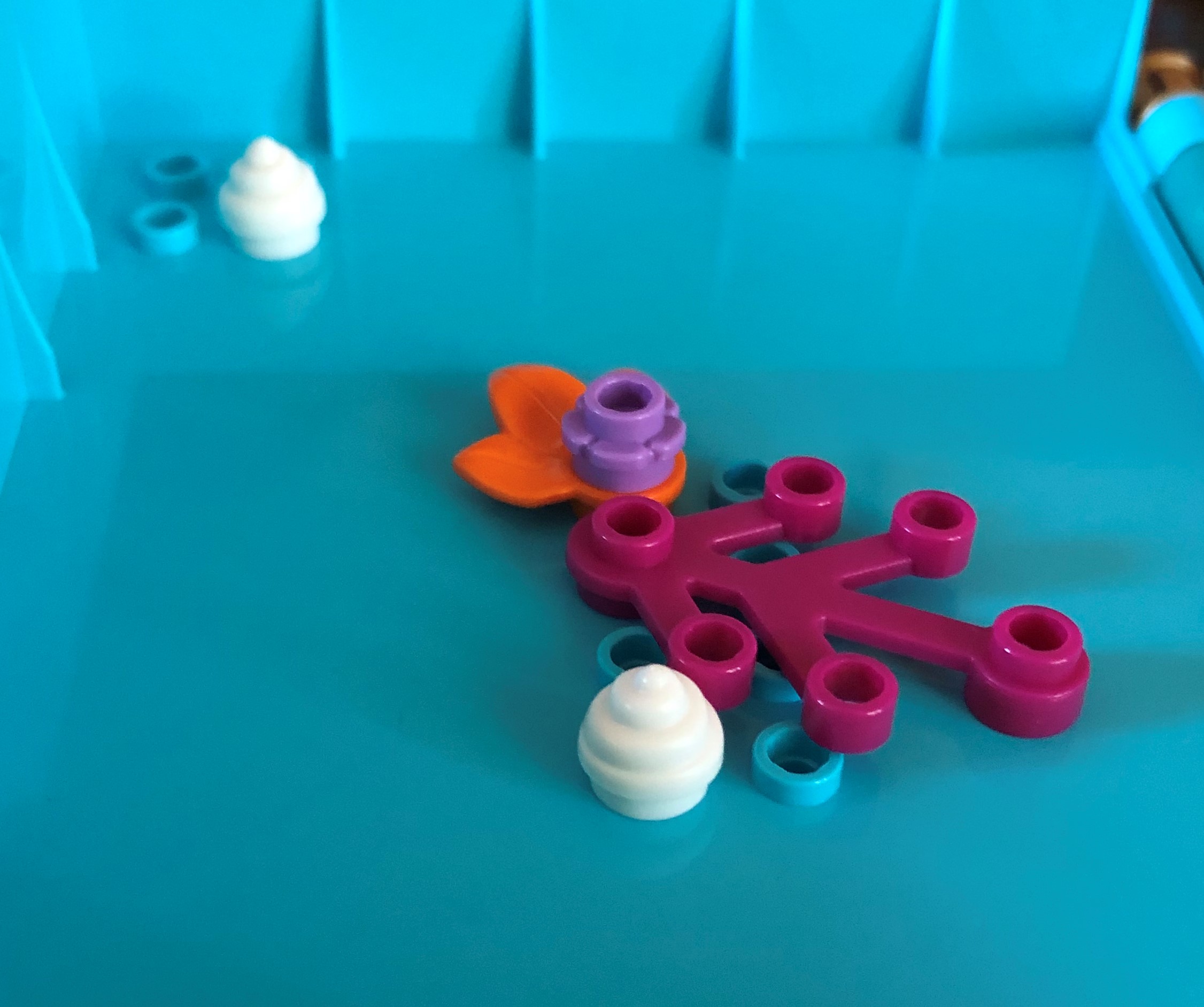 One of the parts that made me giggle was the new poo piece that originally was released with the CMF 19 series. It may represent a seashell, yes, foam, since we’re under water, true, it may even be used as cream-flavored ice-cream in pictures. No matter what you say, however, it will always be LEGO poo for many. Still, it brings a smile to my face and I’m happy it was included in the set.

The box says 5+, making it fit for small children. After seeing the contents, I agree with them. They are very easy to build, and the cartoon-like figures would capture the heart of children easily. However, I wouldn’t say the set is only fit for kids. If, like me, you’ve been a child or a teenager in late 80s, early 90s, then Ariel’s Storybook Adventures would speak directly to you. It would bring back memories, take you back to your childhood. I think it targets adults more than children, even if only from a collector’s point of view.

And besides, it’s LEGO we’re talking about. Aren’t we all kids when we get that new set in our hands?

I think Ariel’s Storybook Adventures, as well as the other three, are all worth buying if you’re into Disney. The micro-dolls make great collectibles (I’m hoping there will be more of them!), and whether you want to display them open or closed, the “books” themselves look really cool.

So, tell me, what do you think of this new theme? Did you get yours already? Or have no intention of getting one? Let me know in the comments! 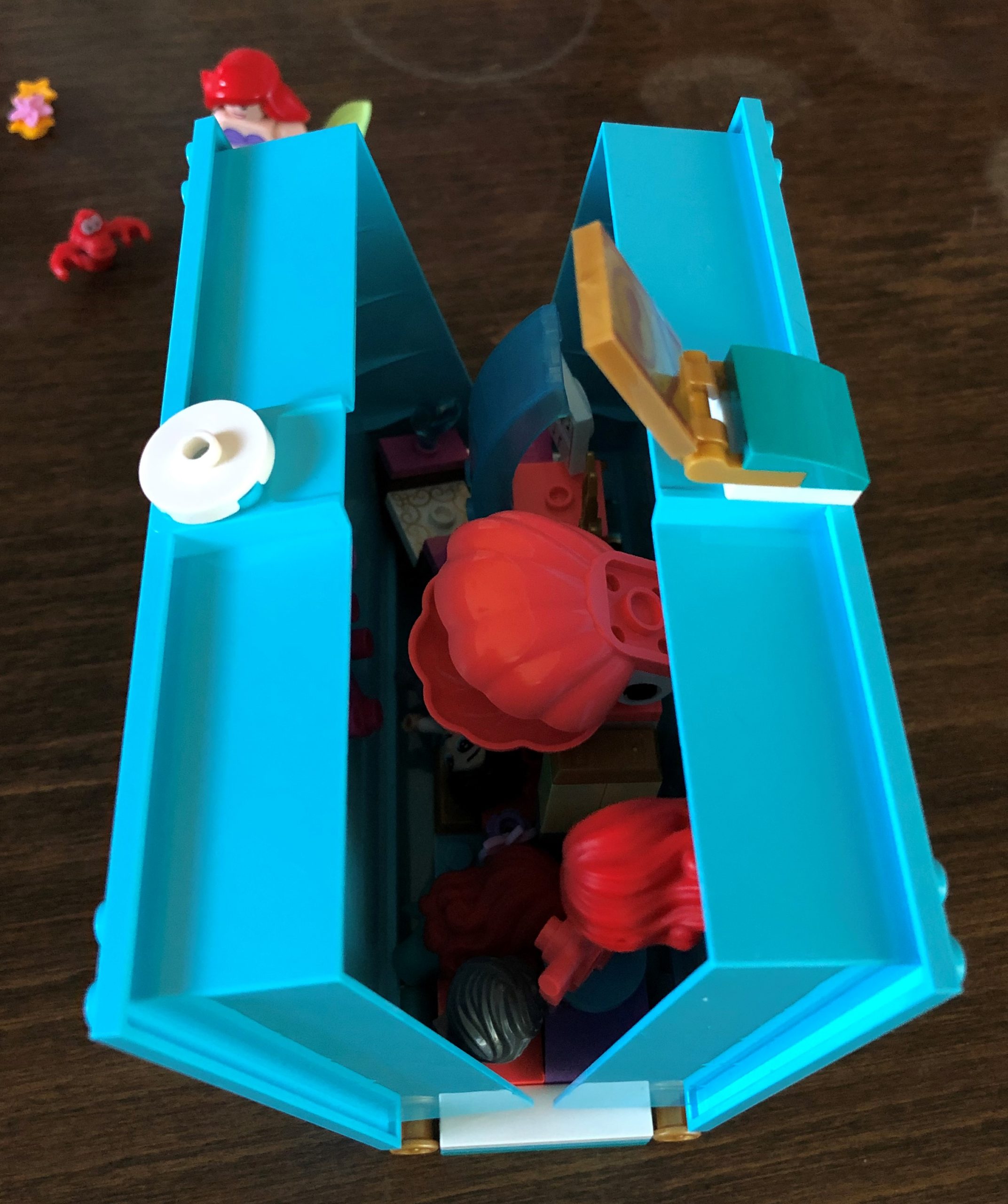