Whilst we know that LEGO can be used to recreate the world around us in interlocking brick form; whether that is vehicles, buildings or even friends and family with our minifigure creations. But the creative mind is not just constrained by what can be seen. In this article, I’m going to look at how LEGO can be used in a more free, artistic way. 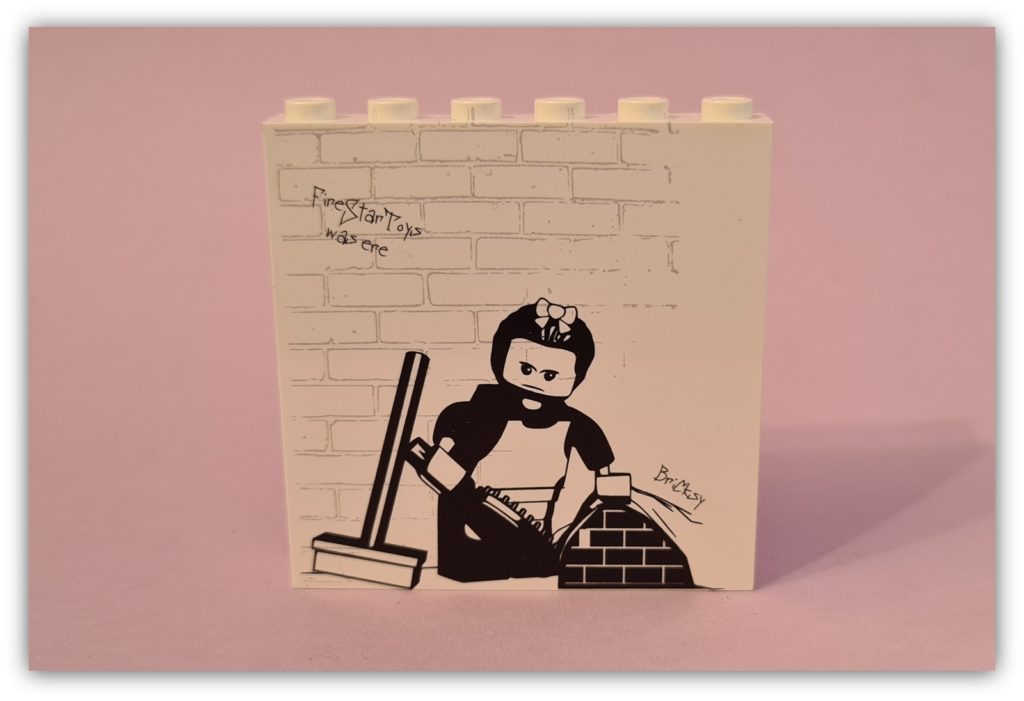 For many of the buildings we might create, we would typically have “clean” walls; uniform LEGO bricks stacked correctly with nice brick look to them. But if you’ve headed slightly off the main roads in real life then you will probably have seen some form of street art. In the example above, we can see the artist known as “Bricksy” has recreated a Banksy in art form!

In regard to LEGO bricks though, there are plenty of other systems that also have used these larger parts to put some form of large picture on them; an example of this is the one below which came from a Mega Bloks Hello Kitty set.  On a personal point here, I prefer this over the application of stickers and I’m sure I’m not the only one! 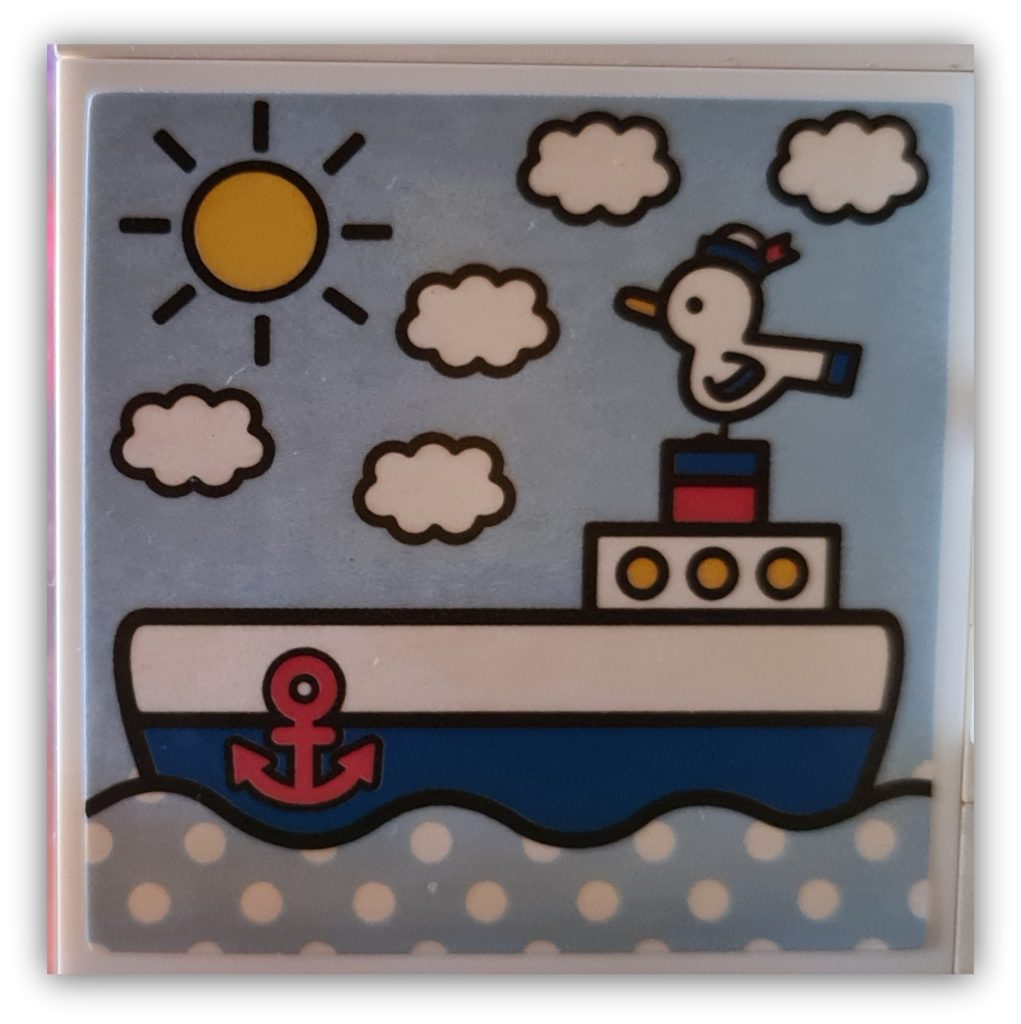 But you don’t need to take up entire walls with art (and I’m talking minifigure size here). Sometimes, all it takes is a cat poster with the word “Believe” to make you want to hang in there! 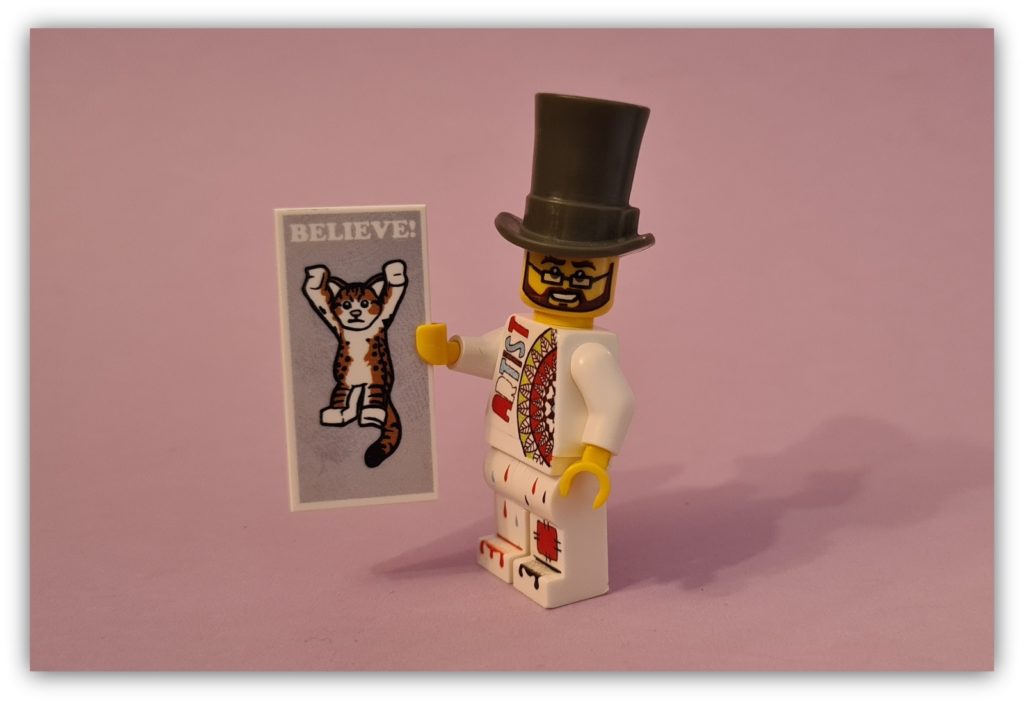 Art is a very subjective thing. What some people may enjoy is something that others don’t like; don’t understand or just don’t feel anything for it.  LEGO art is no different, in fact in some ways it has a harder challenge as many people  only see LEGO as a child’s toy (something I’ll touch on again later in this article). I have three examples here where I have used LEGO in art creation.

Around my office/creative space/den/playroom (depending on what I am doing at the time) I have a wide collection of toys and art that I have created. Most of my drawings are on A5 and A6 paper, and I have little stands to display them in.  In the example below, I have used LEGO to create the frame to hold the art.

My second building example is a little bit of a cheat, but I think it works.  I called it “in case of emergency” and there is now a lovely story behind this. 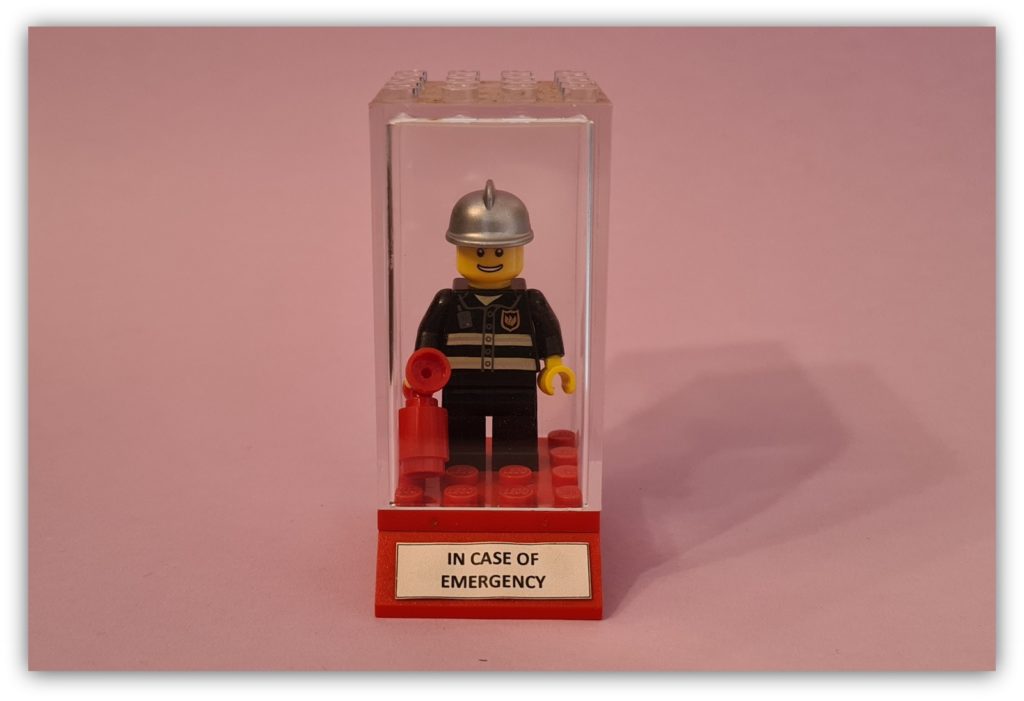 About two years ago now, we had a house fire. Whilst the smoke and water damage was fortunately minimal, there were a number of items that were damaged beyond repair. However, this little piece of LEGO art wasn’t smoke or water damaged; even though the toys either side of it were!

My third example in this collection is especially for those who didn’t buy the Ship in a Bottle (set number 21313) which, in my opinion, is awesome (and possibly enhanced with the addition of a sea creature off the bow of the ship!); why not create a Brick in a bottle? 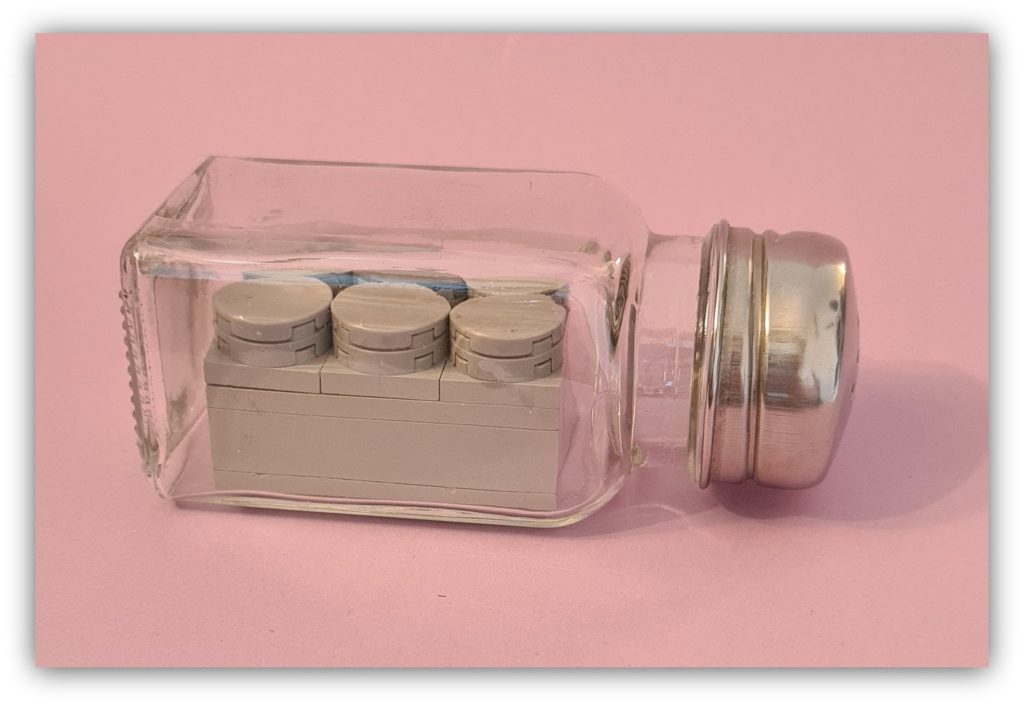 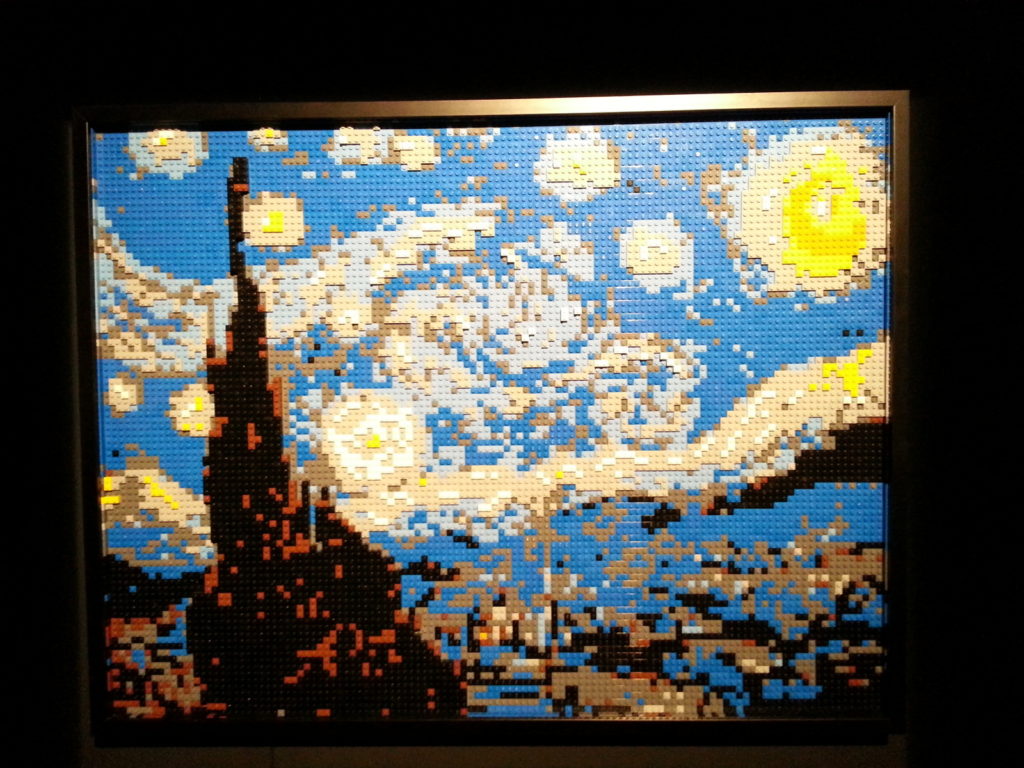 (Above: Mosaic by Nathan Sawaya, from the Art of the Brick tour 2014)

One piece of art that is gaining popularity (albeit slowly) is that of the LEGO mosaic. In a few LEGO stores there are Mosaic Makers; in the UK there is one in the flagship store, London, and the other is at LEGOLAND in Windsor. I did find a couple of other third-party online companies that will also create the mosaic set for you to build. Although the results are impressive, it is worth noting that because of the sheer number of parts that make up these sets they are not cheap. I believe the LEGO Mosaic is around £100GBP and the other site that I could find a price for a 38cm square mosaic art was around $209 USD.  But I think it is worth remembering that you are not really buying LEGO here, you are buying a piece of art. 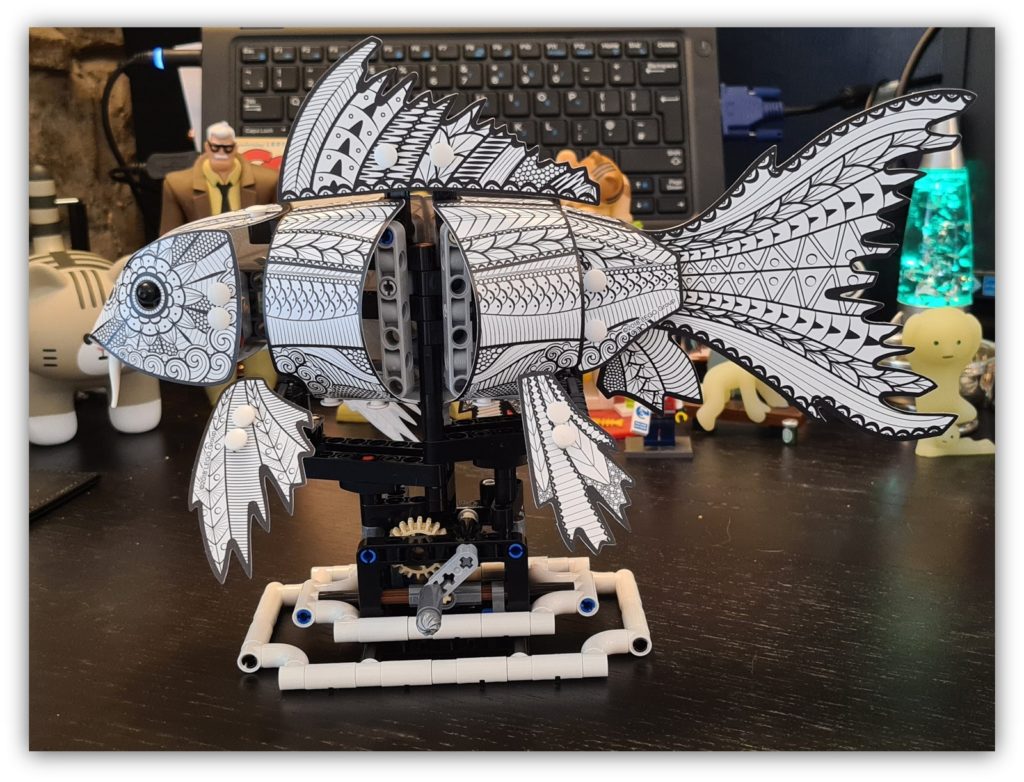 A few years ago, LEGO realised that they were missing a huge audience; that of the adult market and released the Architecture range. As these are more display items than play items, they do fit neatly into this art article.  Back in 2018 though, LEGO released a LEGO set through a crowd-funding campaign. This set, set 81000, was released under the theme of Forma and consisted of the materials to construct a Koi carp.  Whilst it came with a skin to cover the workings, the campaign also allowed backers to purchase alternate skins to make their fish unique.  I chose the black and white skin, with the intention of colouring it in, but once I had built it decided to leave it as is.

It is very hard not to talk about LEGO and art and not mention Jason Freeny or Nathan Sawaya.  Jason Freeny creates sculpture figures, but probably his most-well known collection is that of the half-dissected figures; usually those from a cartoon. But for me, it’s the half LEGO figure that I enjoy the most; I’ve managed to collect a couple of the smaller versions (the larger figures are a little too expensive for my budget / office space!) And because I like to be inspired by art, I also like to try and create my own version too, so I attempted to create a BrickHeadz version as well!

Nathan Sawaya creates huge art pieces using LEGO pieces and then tours the world displaying them. I’ve managed to get to see The Art of the Brick in 2014 and the DC Superheroes exhibitions in 2017 and I would recommend anyone to go and see them if you get the chance.  The example mosaic image was something I saw in the Art of the Brick exhibition.  Probably his most famous art piece is called “Yellow”, below. 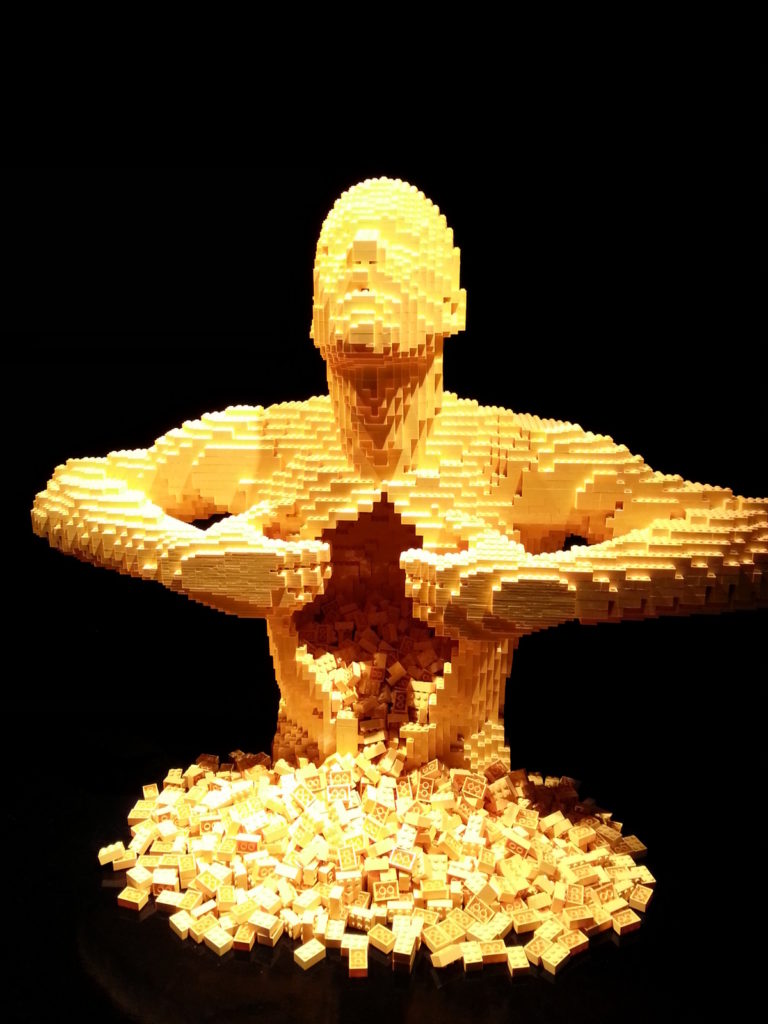 I feel I ought to stress that unlike LEGO shows which have impressive constructions and recreations which are all fantastic and fun, many of Sawaya’s art pieces deal with quite emotive subjects.  One such piece (“Hands”) was of a figure whose hands had disintegrated to bricks – the point of that piece was deal with the question what would happen if he couldn’t do what he enjoyed doing now?

The “Controversy” of LEGO as an Art Medium

Having been to a number of brick shows (and the Sawaya art exhibitions) there seems to be a common thought; that LEGO is a construction toy for children. It doesn’t matter how clever, comprehensive or complicated the build is, for some they will only see the end result being played with (or built by) children.  This also extends to custom creations, which is why so many comment on how expensive some pieces are. This is, in my opinion, a great disservice expecially now LEGO have sets like the Architecture theme which is designed for display only.

The LEGO colour palette is now more diverse than it has ever been; a huge departure from the primary colours I had when I first started playing with LEGO.  A while back I created an “art gallery” on a 16×16 base plate where I could display the 2×2, 2×4 and “wall” art that I had collected. I then started to add the one or two recreation pieces, such as the recreation of Sawaya’s “Hands”. But I realised that I hadn’t included my own LEGO art, and so I added this: 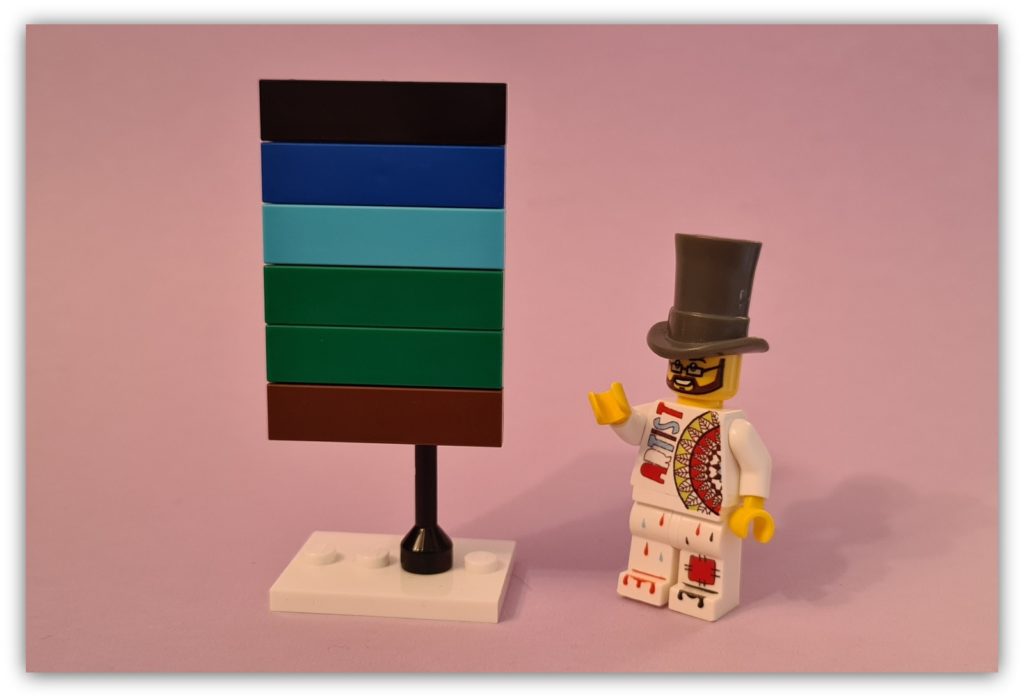 I called it “Land, Sea and Sky”. The idea was based in part on the colours of the earth, land and sky as we head up into space; I had been inspired from a trip to the Tate Modern, looking at some of the more abstract art such as Rothko.

The most recent theme to be released by LEGO is that of LEGO DOTS; a release of sets where the main construction is left to the builder, colouring the result by using 1×1 tiles, dots and quarter circle pieces (I’m sure there’s a technical name for that).  We did a review of DOTS here and since then I have been tinkering around with the dots for all manner of enhancements to my builds.  But as this is an article on art, I created this very controlled piece of art: 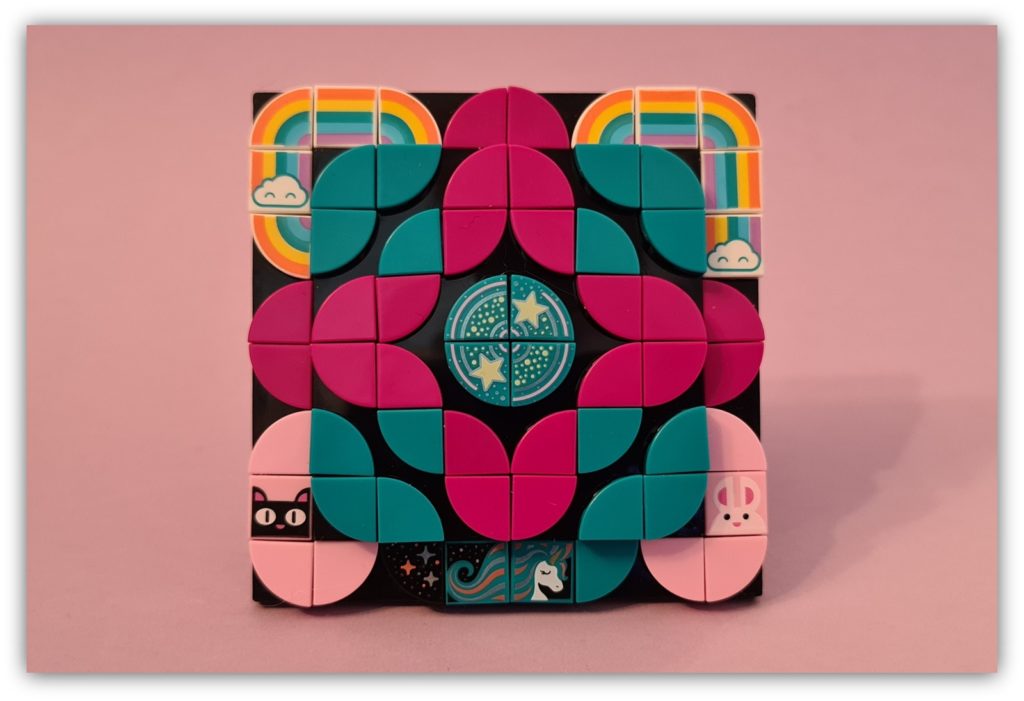 As I mentioned earlier, art is a very subjective subject and I know that there will be those who will only see LEGO as something for children to play with; so art made from LEGO isn’t something to be taken seriously.  But from me, art is something that can inspire people and can trigger all manner of emotions and I hope that this whistlestop journey of art in LEGO will inspire you too.