As a quarantine project, my brother and I decided we were going to attempt building our first MOC. We had built custom models before, but those were often hodge-podges of bricks with so many exposed studs and hardly any functions. This, however, would be our first model where we would attempt to make things as detailed as possible. The result was the LEGO Modular-Compatible Avengers Compound, based loosely on the Avengers base depicted prominently in Captain America: Civil War and Avengers: Endgame. It included a lobby, an office, a lab, an armory, a briefing room, a prison, an interrogation room, and a rooftop mini bar, with each room being almost fully tiled. It wasn’t perfect, but with five stories and several hundred pieces, it was definitely the largest thing we had ever built.

But it did have some flaws. As shown in the picture, it did not have a uniform color scheme and once again, there were elements that looked like a hodge-podge of wall pieces just thrown together. So, at the start of February, we decided it was time to revamp the Compound and make things better. 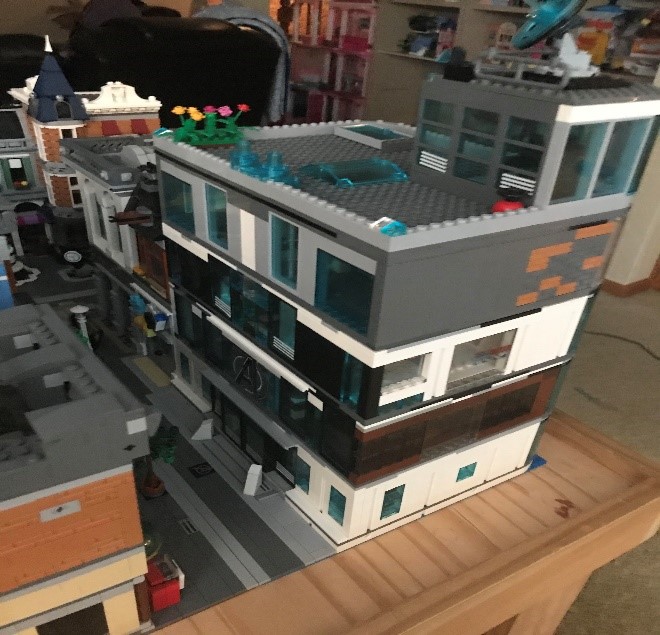 Part I: Where We Got the Parts

Building the Avengers Compound modular was an endeavor that required online part orders, rummaging through old bins, and disassembling several LEGO Marvel, DC, and City sets that we had acquired over the years. The current iteration of the Compound is amalgamation of pieces from:

The first floor is essentially the lobby of the LEGO Avengers Compound. Prior to the renovations, the modular was built on a 32×32 baseplate; a size that worked for all the other rooms but had left our lobby feeling pretty cramped. As such, that lobby only had the fountain and chair you see in the current rendition. Now, we have built the Compound on a 32×32 baseplate, as well as an additional 16×32 baseplate. 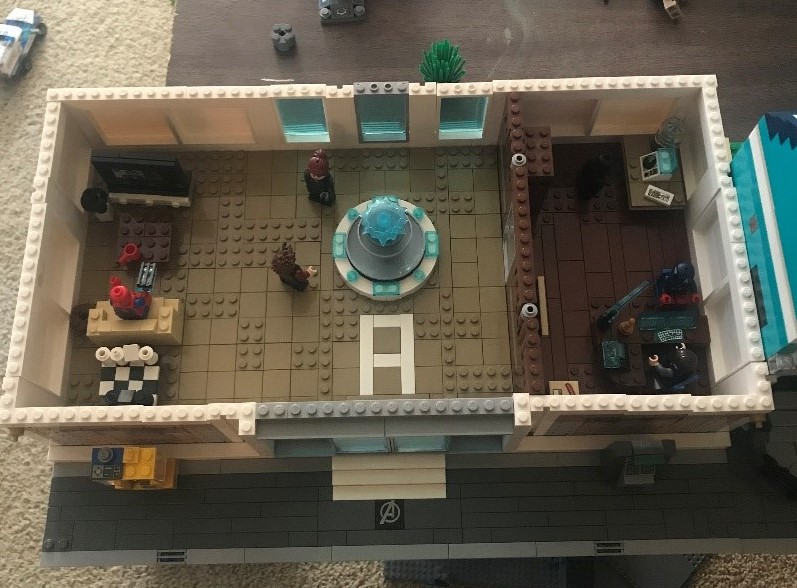 With the added space, we now had room to include new features while also having breathing room for minifigures to stand. On the left-hand side, we have have a chess board on a table, a coffee table, and a TV monitor playing the local news (printed tile courtesy of the 2020 Avengers Tower Battle set). In the first version of the MOC, we did not have enough sand yellow tiles to cover the baseplate, and the windows in the back were curved, which led to some studs sticking out. Now, we have managed to cover every stud with a sand yellow brick or tile, or the rare white tile that makes up one of my favorite parts of this floor, the tiled Avengers A.

With the addition of a 16×32 baseplate, we decided we would save room on the next floors by building Tony Stark’s Office on the same level as the lobby (if you look at the first picture, you can see the original office on the right-hand side of the second floor). The office took us a few tries as we had quite a few ideas on what to add, but not a whole lot of space. Ultimately, we had to scrap some ideas. The bookshelf that Black Panther is standing in front of (a design taken from the 2018 Sanctum Sanctorum set) was originally a sliding door in the 2020 version of the MOC, but, due to space, we had to make it stationary. It still looks great and is my second favorite part of the office.

The highlight of the office for me is Tony’s computer desk. I’m really happy with how it turned out, especially the curved corner on the left-hand side. The desk utilizes a trans-blue 2×4 printed tile that says BLOCKED CALLER (I believe this is from the first Iron Man Hall of Armor in 2019). I also really like the little gold figurine he keeps in front of it. 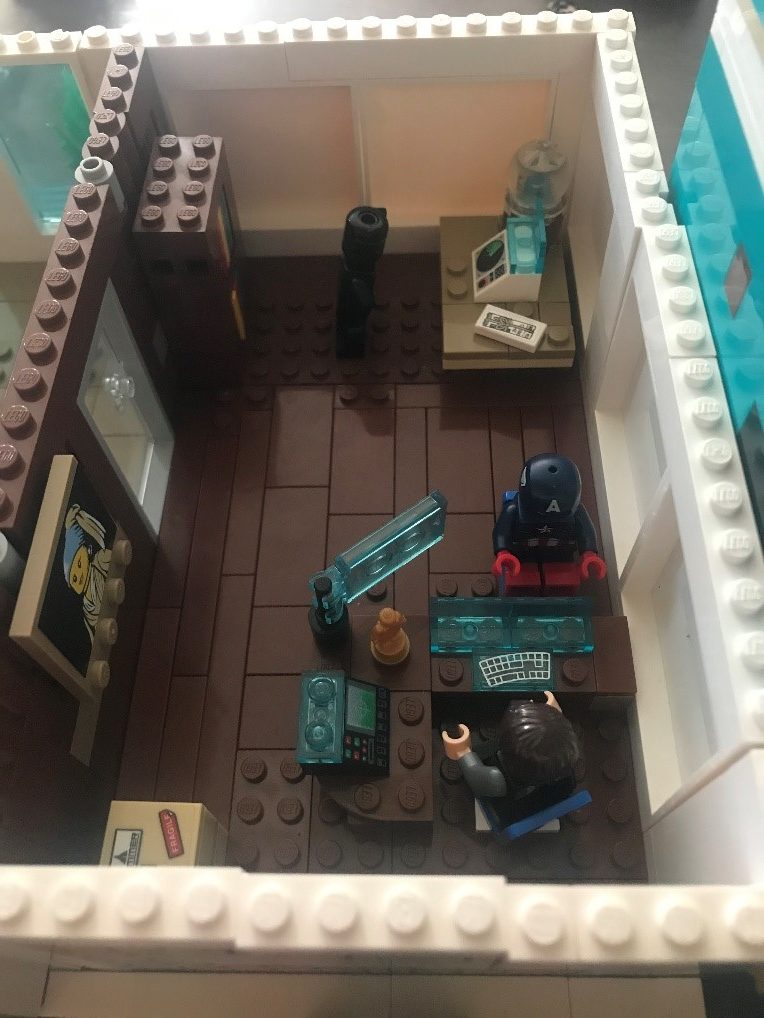 Also included in the office are a set of packages (printed tile from the 2016 Super Hero Airport Battle), another desk with a computer, newspaper, and snow globe, and a portrait hanging on the wall. I don’t want to leave out the tiling here either, as I think the dark brown color scheme gives the office a hard wood floor feel, something I believe Tony Stark would make his office out of. We unfortunately didn’t have enough tiling of that color to complete the full length of the office, evidenced by the large brown plate that T’Challa is standing on, but I’m happy with what we were able to accomplish with what we had on hand.

I’m really happy with how the façade turned out with this rendition. It’s a little hard to see in the picture provided, but the front walls this time around are made up of medium nougat and light grey masonry bricks that really give the Compound a whole lot of style. Both sides of the front wall include four windows that are about minifigure height. On the left side of the Compound, we put the yellow phonebooth that you may recognize from the Captain Marvel polybag from last year. On the other side is an ATM that actually holds LEGO dollar bills.

The last part of the exterior I want to talk about are the doors, as we managed to give the modular sliding doors, a feature I don’t think any of my official LEGO Modulars have. The design is fairly simple (four window panes and four 1×8 bricks with door rails), but it is pretty neat and looks great. 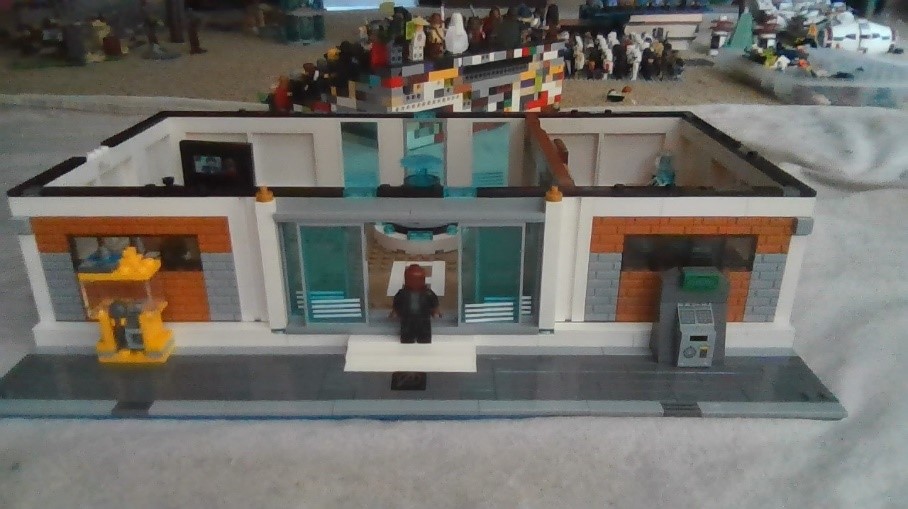 That’s all the progress we’ve made at this time. It took a few attempts before we finally managed to arrange the tiling in a way that sort of created a pattern while also covering all the studs. The walls also took two tries before we were happy with the color and the design. All in all, I think we’re off to a great start. Stay tuned for the next update where, hopefully, we will have finished assembling the second floor of our LEGO Avengers Compound.