Tom Jurassic back here and today we are going to delve back into the LEGO Realm for a last look at my favourite LEGO Marvel sets released up until today’s date. We’ve got some fun sets to look at – so let’s not waste any more time, and let’s dive straight in to the best LEGO Marvel sets of 2017-2019! 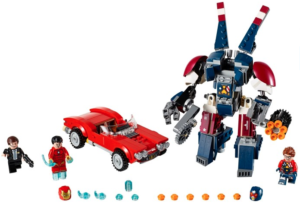 5 Years after the release of the LEGO Avengers sets, we finally get an iconic character which I think we had all been longing for – Agent Phil Coulson.

Coulson is not the only good thing about this set, however! Not only do we finally get a fantastic version of the fan favourite S.H.I.E.L.D agent, but we also get two other fun Minifigures – including a brand-new version of Iron Man complete with alternate hair piece and action features. This figure – based on the iconic Invincible Iron Man suit from the comics, introduced a brand-new helmet which has since seen multiple uses in an assortment of different LEGO sets. We also get Detroit Steel – an interesting, if somewhat unknown, comic book villain. However, we also received an alternate hairpiece – allowing us to create Justin Hammer, the villain of Iron Man 2. This was a nice way for LEGO to give us characters from previous MCU properties without having to invest in sets for them.

We also received two fantastic builds in this set. The Detroit Steel shared similar building techniques to the Hulkbuster. We also got some interesting play features with this suit – a six-stud shooter piece on one hand, and a fun chainsaw-style feature on the other. The real highlight, however, was Lola – Agent Coulson’s corvette from the TV show Agents of S.H.I.E.L.D. This build was incredibly nice, with a hover feature like the Spider-Man set we looked at yesterday incorporated into it. LEGO found a perfect way to pay tribute to one of the series’ iconic elements. 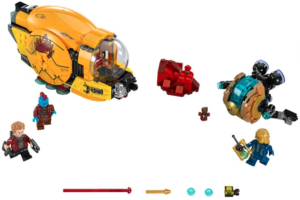 Another more recent set I have a lot of appreciation for is Ayesha’s Revenge. It gave us a brand-new version of Star Lord, and a baby Groot. We also got one of the villains from Guardians of the Galaxy II – Ayesha, who came complete with leg printing (somewhat of a rarity these days). We also received a unique gold hair and headpiece – which allowed LEGO to recreate Ayesha’s aesthetic. The highlight, however, was of course Michael Rooker’s fantastic Yondu – who fans had wanted since the first film. The unique fin mould for Yondu was great – and I also appreciate the golden arrow used for his weapon. The mining vessel build was also fantastic – with intricate detail and functionality built into it. This, combined with great minifigures, made for a fantastic set – and one of the best at a cheaper price point. A worthwhile pickup if you ask me! 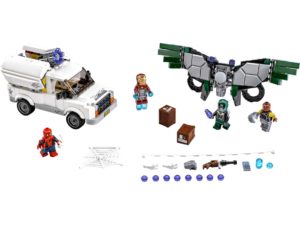 Beware the Vulture also stands out for me. Firstly, for the LEGO minifigures which are included in the set. We got Spider-Man – updated from his Civil War Minifigure. This really is a masterclass in good minifigure design – incorporating arm printing and 360-degree leg printing. We also get a brand-new Iron Man armour – never a bad thing. Two villains also feature. First is Shocker. Whilst this character misses some of the key areas of the comic book character, it is accurate to the version we see in Spiderman Homecoming, and includes some nice arm printing. The other character is Vulture. Whilst the printing leaves a little to be desired, we got a cool helmet and a fantastic Michael Keaton face print.

I also really appreciate the utility van’s build . The storage containers feigning the Department of Damage Control are a nice nod to the organisation, and I absolutely love the van’s functionality. It not only holds all the accessories, but has an incredibly flush feature. The fold-out turret can sit inside, and it doesn’t affect the vehicle’s aesthetics! The curvature on the vehicle also compliments the build – creating a strong look for what would otherwise be a mediocre vehicle. I also really appreciate the Vulture’s flight suit. Whilst massively over scaled, LEGO did make a conscientious effort to intricately decorate the suit – giving both interior and exterior facing sides enough detail to adequately cover multiple different viewpoints. This set encapsulated Spiderman Homecoming well, and was a fantastic set to accompany the new Spider-Man’s cinematic debut.

76084: The Ultimate Battle for Asgard 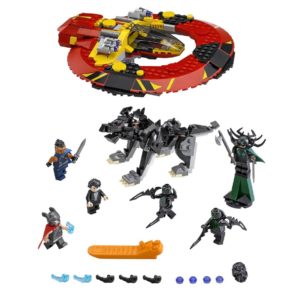 Sometimes, LEGO release fantastic sets that perfectly encapsulate the film they represent. Including all the key characters needed to capture the memorable moments. The Ultimate Battle for Asgard is one such set. Firstly, we get all the key characters from the film. Thor – a nice new version which includes both torso and leg printing, and a fantastic new helmet mould which both comic and MCU fans will absolutely adore.

We also get Valkyrie – who has a nice torso print and a new hairpiece. Then, Bruce Banner – a character we all wanted for ages. Getting him after years of wishing is fantastic – even if the outfit isn’t too accurate. Lastly, Hela – who includes a host of printing on her torso and a FANTASTIC helmet piece. It’s unique to her character and works perfectly. I also appreciate LEGO’s choice to include an alternate hairpiece here – really giving fans value for money.

In addition to Hela’s two warriors, we also get a fantastic build – the Fenris wolf. This is a memorable character within the film, and for a brick-built LEGO Animal, LEGO did a really good job with this character. Not only is it incredibly screen accurate, but it also has decent articulation built in – allowing fans to place it in an assortment of diverse and dynamic poses. We also get the Grandmaster’s Commodore spaceship in this set too. Whilst scaled down from the film (where it features a massive passenger/cargo bay), this ship still features some interesting effects applied to create an angular and unique design. The colour scheme here is nice too – with vibrant, retro colours we don’t often see. I really appreciate this set – and feel like it encapsulates Thor Ragnarok perfectly within a LEGO format. 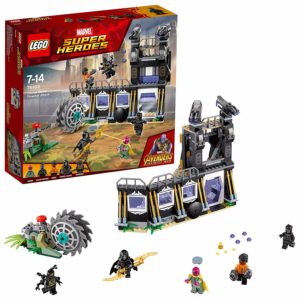 Infinity War was the biggest event for Marvel fans to date – so, naturally, fans of the franchise were expecting good things from the LEGO sets. Unfortunately, however, a large majority of the sets were very mediocre. Between lacklustre prints and part choices for characters, and a rather disappointing overall line-up, it really did not capture the high points of this monumental moment in the MCU.

This set included arguably one of my favourite builds in the wave – a section of Wakanda’s defensive wall. The build was incredibly well done – with nice space both inside and along the wall, and a nice colour scheme which felt fitting for the location depicted. I really appreciate the aesthetic value of this simple build – which if bought multiple times, would allow fans to construct a nice defensive wall and re-enact some of the epic sequences from the film.

The minifigures are strong too. We get a re-release of Black Panther – a popular character which will no doubt be well received for those who missed his titular film’s sets. I do, however, wish he included printed ears – like in the Civil War line. We also get an Outrider – cannon fodder enemies that appear across the IW range. I also appreciate the update to Vision – finally giving us a version with the correct colour gem.

Subtle changes like this to make improvements in the longevity of the franchise are always welcome. There’s also a fantastic rendition of Shuri – a character many fans wanted, and who includes a fantastic hairpiece. Lastly, we get Corvus Glaive – who includes great prints and a nice tattered cape that really captures aesthetic. Overall, both the characters and construction make a fantastic set, one of the strongest elements of the Infinity War range. 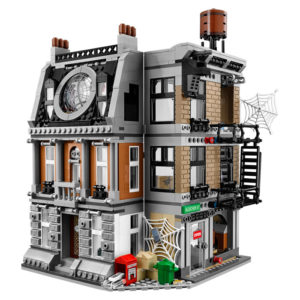 We’re ending today on one of my favourite LEGO sets of all time – the Sanctum Sanctorum Showdown. Those of you who read part two will be aware this is the second Sanctum-themed set I love. So what makes this one just as good as the other? Well, in short, it’s multi-function format.

Not only is this an awesome feature-packed playset – it’s also a beautiful rendition of the Sanctum and a New York apartment. LEGO put a clear level of attention to detail in with this set. The play-features (especially the hidden Time Stone) blend seamlessly with the beautiful architecture of the building on show. The Sanctum looks elegant and the iconic architecture – such as the domed window – is achieved incredibly well. Furthermore, the apartment side building achieves an altogether different aesthetic – feeling like a run-down New York street. The sharp contrast combined with beautiful implementation of play features is fantastic. This really makes the Sanctum, in my opinion, the BEST structure-focused set in the Marvel line. Period.

The minifigures are also fantastic. We get a sharp new Iron Man – which really captures the smoother yet angular nature of the Mk.50 armour. I also absolutely adore the HUD-themed head we get – giving fans yet more options for displaying Tony Stark. The Iron Spider Minifigure is also cool. While the legs look a bit awkward, the overall designs are nice. Ebony Maw is another fantastic figure – looking spot-on to his film appearance. Cull Obsidian is a unique and fun bigfig who looks like he could easily take on the Hulk and win. This, complimented by a new Doctor Strange with soft cloak and brand new hairpiece, makes for a fantastic Minifigure line-up. Add this to its plethora of minifigure accessories, and you have the perfect flagship set for the Infinity War line-up.

So, that sums up our look back at some of my favourite Marvel sets to mark March. What did you think? Were there any sets you preferred that I perhaps didn’t? We’d love to hear from you on Social Media.

Also – don’t forget that Firestar Toys stock tons of fun Super Hero products. If you’re looking for LEGO Super Hero Minifigures, you can find them here. And if you want to get some cool vehicles cheaper without the figures – you can snag them here. I’ve found this especially useful for building S.H.I.E.L.D forces.

Thanks for reading guys – and stay tuned for more articles in the near future!