2019 has been a great year for LEGO! With the amount of great sets from LEGO we got this year it was tough to pick my favorites! I loved the amazing Ideas sets, LEGO Movie 2 sets and the new LEGO themes that were introduced in 2019. The number of great builds, great minifigures for decent prices was wonderful for fellow LEGO collectors like myself. I do wish LEGO did a better job with the Marvel sets but at least they went harder on other themes. If you haven’t, please check out my previous blog of Best LEGO sets of 2019 part 1! Without further ado this is part 2 of my favorite LEGO sets of 2019.

Although Benny’s Space Squad set is a very small set and minimal in terms of piece count, this is a great set with fun builds, including 4 figures which is really rare for a set this affordable. Released for The LEGO Movie 2, Benny’s Space Squad was sold for $9.99 USD, includes 68 pieces, 3 figures that look back at the LEGO space figures from the 1970’s as well as the iconic Benny figure. Included to accompany the figures is a small space cart, with a compact yet effective design, a micro version of Benny’s spaceship, and finally a small robot to help out Benny and his squad. 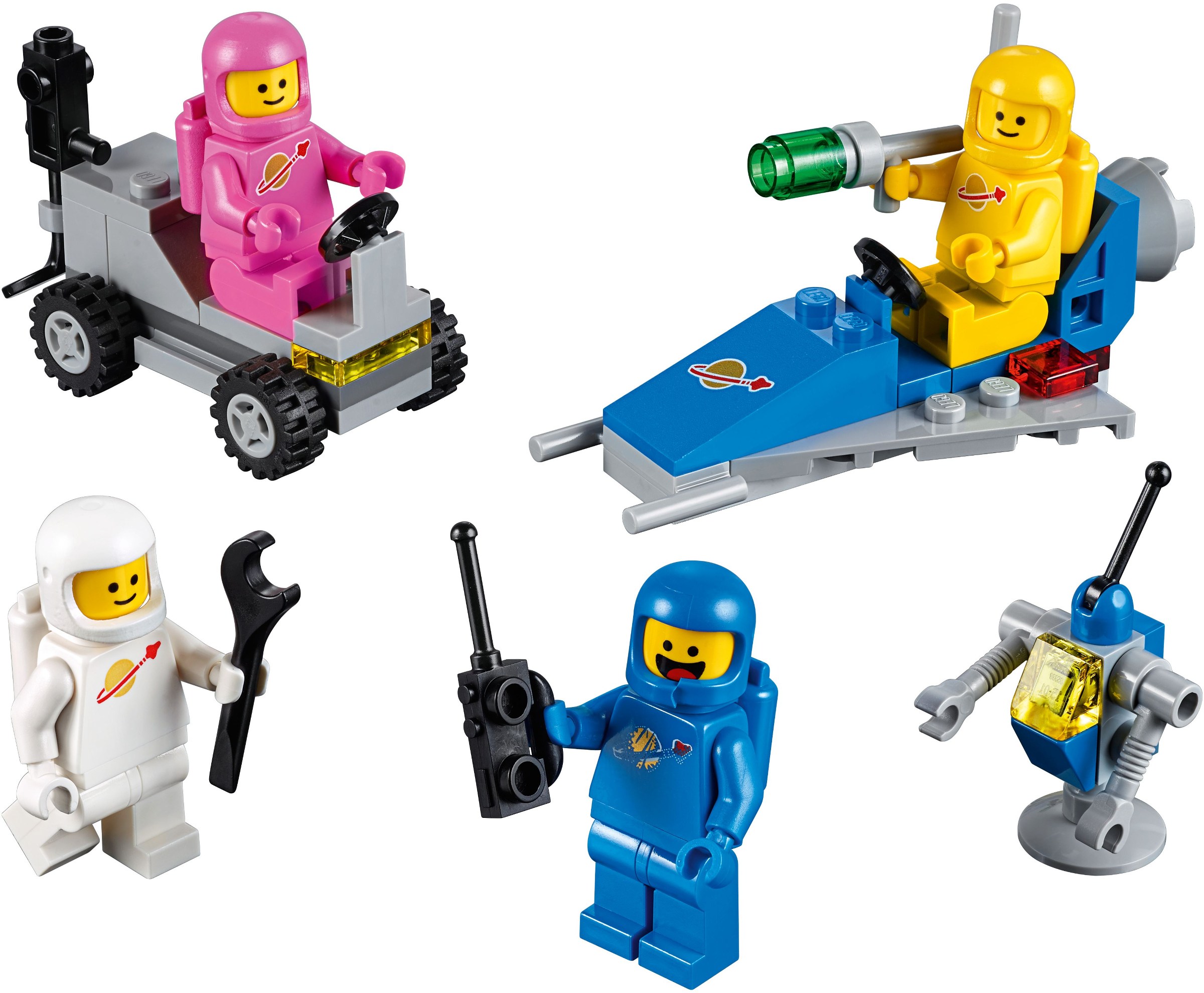 I bought this set a few months after it was released, and I have to say, I truly enjoyed this set much more than some expensive sets I had bought, the figures aren’t anything unique but they were perfect for outdoor shots and gave a fun aspect to them. This set has more of a playability feature and imagination provoking experience compared to more expensive sets. Benny’s Space Squad doesn’t have any special builds but compared to other sets that cost $9.99 is what makes it one of the best sets 2019.

The Flintstones set is not only one of the best sets of 2019, I would say that it’s possibly one of the best sets of all time! The attention to detail and overall look of the build is fantastic. Based on the popular show ‘The Flintstones’ this Ideas set was retailed for $59.99 USD, and included 4 minifigures, 748 pieces, and three separate builds – Fred’s footmobile, The Flintstone house, and a small yet effective build of an outdoor mailbox. The price to part ratio is pretty good for this set, you mostly get small pieces for this set to create the smooth texture and look of the Flintstone home, which is for the better since bigger pieces would result in the build looking more choppy and higher priced, most likely inflating the price to $65-70 USD as well. 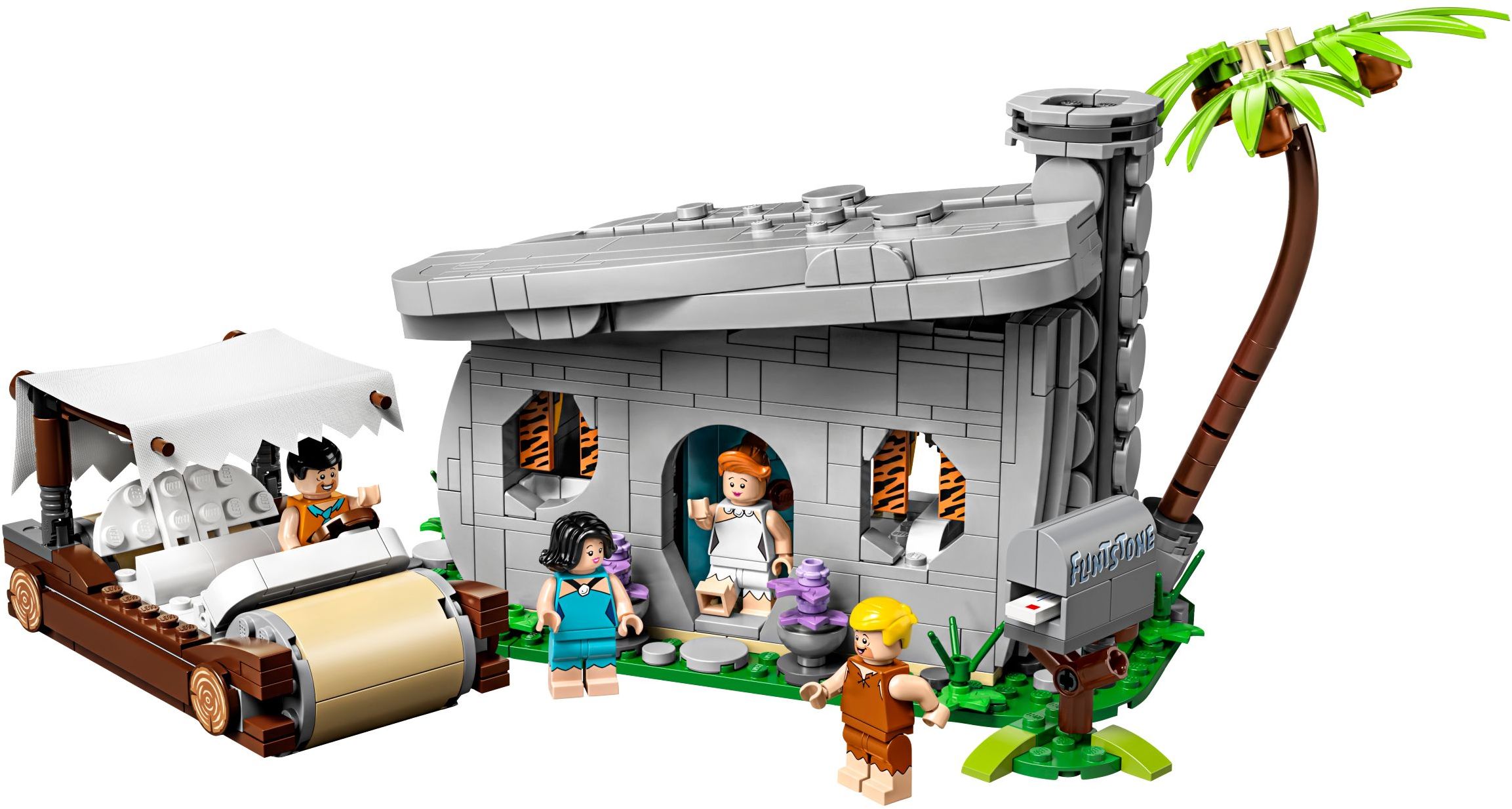 Figures included in this set are Barney Rubble, Betty Rubble, Wilma Flintstone and the well-known Fred Flintstone, all with their own unique face designs, torso prints, as well as having dual molded legs for each figure. LEGO did not miss with the figures in this set, all look very accurate to the show and have a good amount of detailing that has looks good while still maintaining the look of the pretty plain outfits of the characters from the show. The only thing that LEGO could’ve done to make this set better, is possibly make custom molded head pieces for the Flintstones and Rubbles since their heads on the show aren’t really the shape and look as a normal human head, especially Fred’s head.

I also would’ve liked if this set had included Dino the Snorkasaurus, since he is one of the main characters and well-known icons from the show, if LEGO did decide to make it, then I can see them making it with the LEGO Jurassic World Velociraptor pieces or just making one on their own with various small parts.

The 1st Jurassic Park movie is in my opinion one of the best and nostalgic movies I’ve ever watched, and was the start to a beloved series of movies for all generations. This set brings in memories from that amazing movie, I’m glad that LEGO decided to make a set based on the blockbuster film from 1993. This set retailed for a high but understandable price of $249.99 USD, includes 3,120 pieces, and six figures, five of which are exclusive to this set. The main part of this set is obviously the massive T-Rex build and the even larger Jurassic Park entrance. 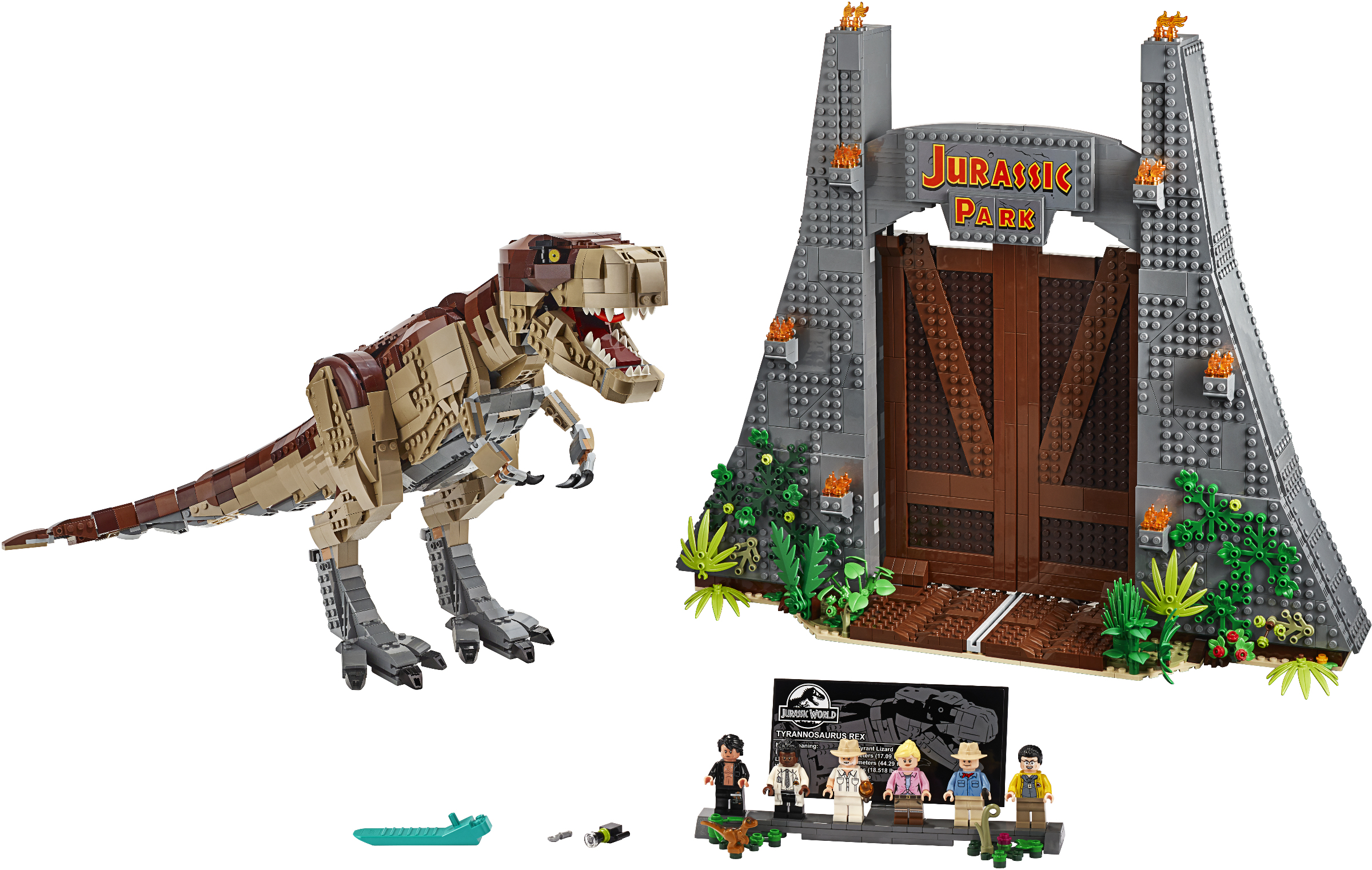 The T-Rex has various points of flexibility in the jaw, neck, each of those tiny arms, legs and various joints on the tail as well. It’s no surprise to see that 3000+ pieces went into making this set, both the T-Rex and entrance mainly consist of small parts which eventually lead to two builds which tower of the original T-Rex molded build. I wish I had this set, not only for the final product and figures, but to see how the process on how the T-Rex was made and how long it would take, since from the outside it looks like it’s just built using small pieces.

Now onto the entrance, it has a big display of the text Jurassic Park on top the doors, which appear to be stickers. Fire surrounding the grey parts of the entrance, and 4 shades of green are used for the foliage which is a nice touch and adds to the realistic type of look. In the center of the entrance there appears to be a train track type build which is great accuracy to the movie. Now you’re probably wondering what the back of the building looks like, well fortunately LEGO decided to include 6 rooms instead of a blank grey wall, 3 rooms are displayed on each side of the leg of the arch. Rooms included are an ice cream eating room, a bunker with a bed, a bathroom with a toilet build, a research lab, power shed scene, and the scene where Dennis Nedry was attacked. 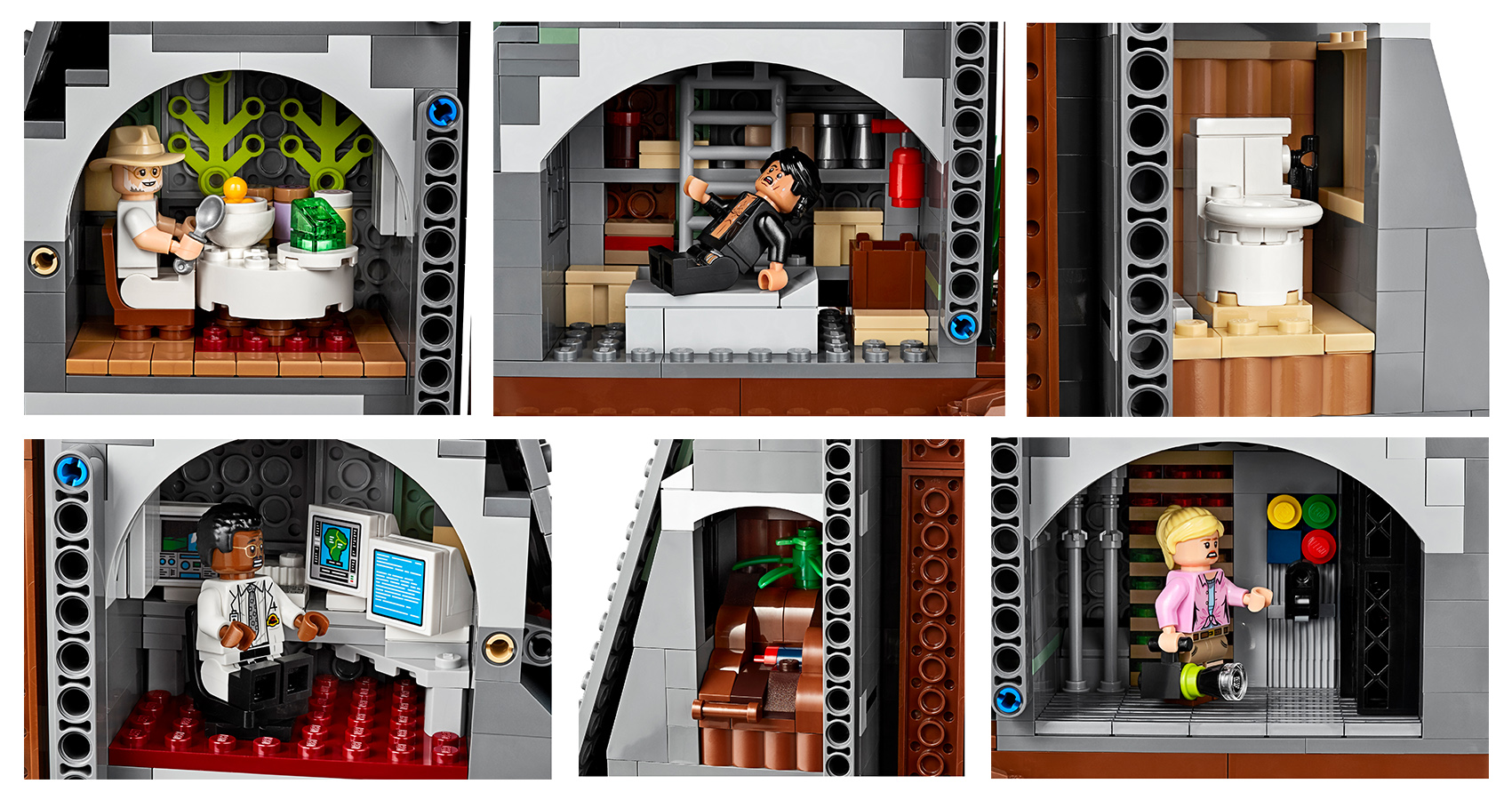 Speaking of Nedry, he’s one of the 6 figures in this set, others included are John Hammond, Ian Malcolm, Ellie Sattler, Alan Grant, Ray Arnold, as well as baby dinosaur figures. The final thing included in this set, is those black display pieces usually included in big sets, this one is stats on the T-Rex and the grey version of the T-Rex included in this set shown. Overall, this set is one of my favorite sets of 2019, and is a set I wish to get someday.

That concludes my part 2 of the best LEGO sets of 2019, stay tuned for part 3 where I talk about my next 3 sets that I believe belong in this series. Thank you for sticking around and I hope you enjoyed it. Peace!

May the Force Be With You: A Look at the New 2020 LEGO Star Wars Sets