LEGO Star Wars has produced some incredible things over the past twenty years. The largest ever LEGO set. A life sized LEGO X-Wing. Several TV series and special short films. However, all these remarkable pieces of art pale into insignificance when compared to Bombad Bounty.

This 5-minute masterpiece was an animated short film produced by M2Film. It was originally released in November 2010 and can still be found on LEGO’s YouTube Channel. This article will dissect the film, analyse the jokes and identify all the hidden Easter eggs.

This may be an unpopular opinion, but I never liked the Star Wars crawls. Why do you have to read to understand the movie? When I was younger, the crawl went too quickly for me and I was never able to read it all. Plus, it was extremely dull. The A New Hope crawl lasts for 1 minute and 37 seconds!

Fortunately, Bombad Bounty fast forwards through the crawl to dive straight into the action. However, by slowing down the YouTube video I was able to uncover the Bombad Bounty crawl.

Just nineteen years ago everything was so clean and shiny and polished. And now look at it. It’s a real shame.

Fortunately for the galaxy there is A NEW HOPE. A hope… with a mop. Boss Nass Cleaner. Scrubbing the galaxy clean, one system at a time….

After identifying each blurry word in the crawl, I discovered the crawls text had already been made available on the Bombad Bounty Wookieepedia page. That’s 10 minutes of my life that I’m never going to get back!

Having found the crawl text, I decided to put it into a Star Wars Crawl Creator. Below you can watch the crawl without fast forwarding (although I did have to increase the video speed a little to turn it into a GIF).

Stormtroopers leap into the Tantive (one of whom audibly yelled “Geronimo”). We see the rebel troopers preparing for the invasion.

Our hero, Boss Nass Cleaner sweeps onto our screens. Quite literally, he mops his way across the Tantive’s shiny corridors. The wet floor causes Darth Vader to trip and break his leg.

Bafflingly, LEGO has never produced a Bombad Bounty Cleaner figure! This guy needs to be made. Get on it FireStar Toys! Get on it! 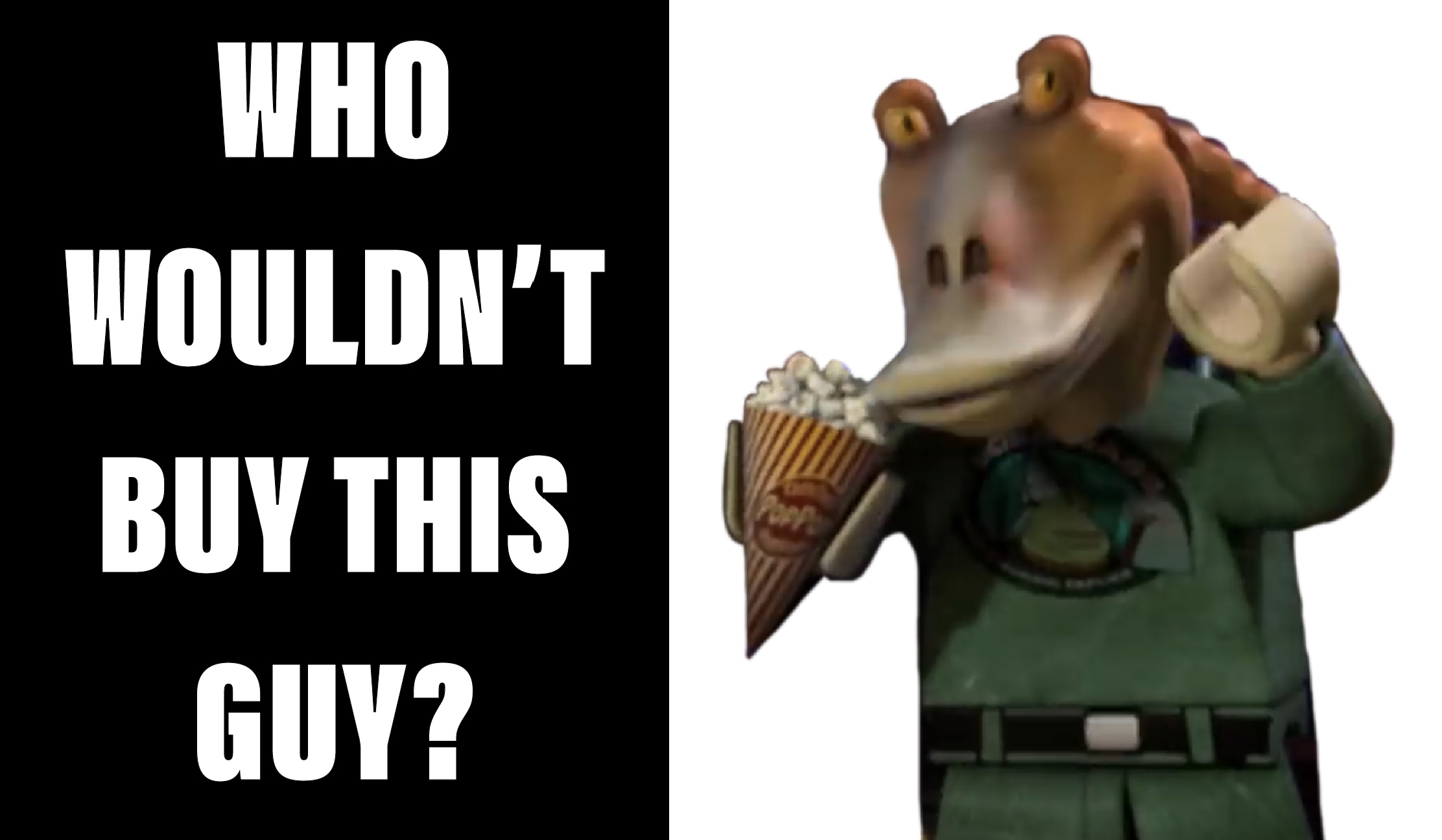 Next, we see Darth Vader being tended to a medical droid. This scene is full of delightful Easter eggs. Darth Vader’s leg is now wrapped in bandages. These bandages are full of jokes and references. Because some of the writing was small, I decided to redraw these Easter eggs to make them easy for you to read. 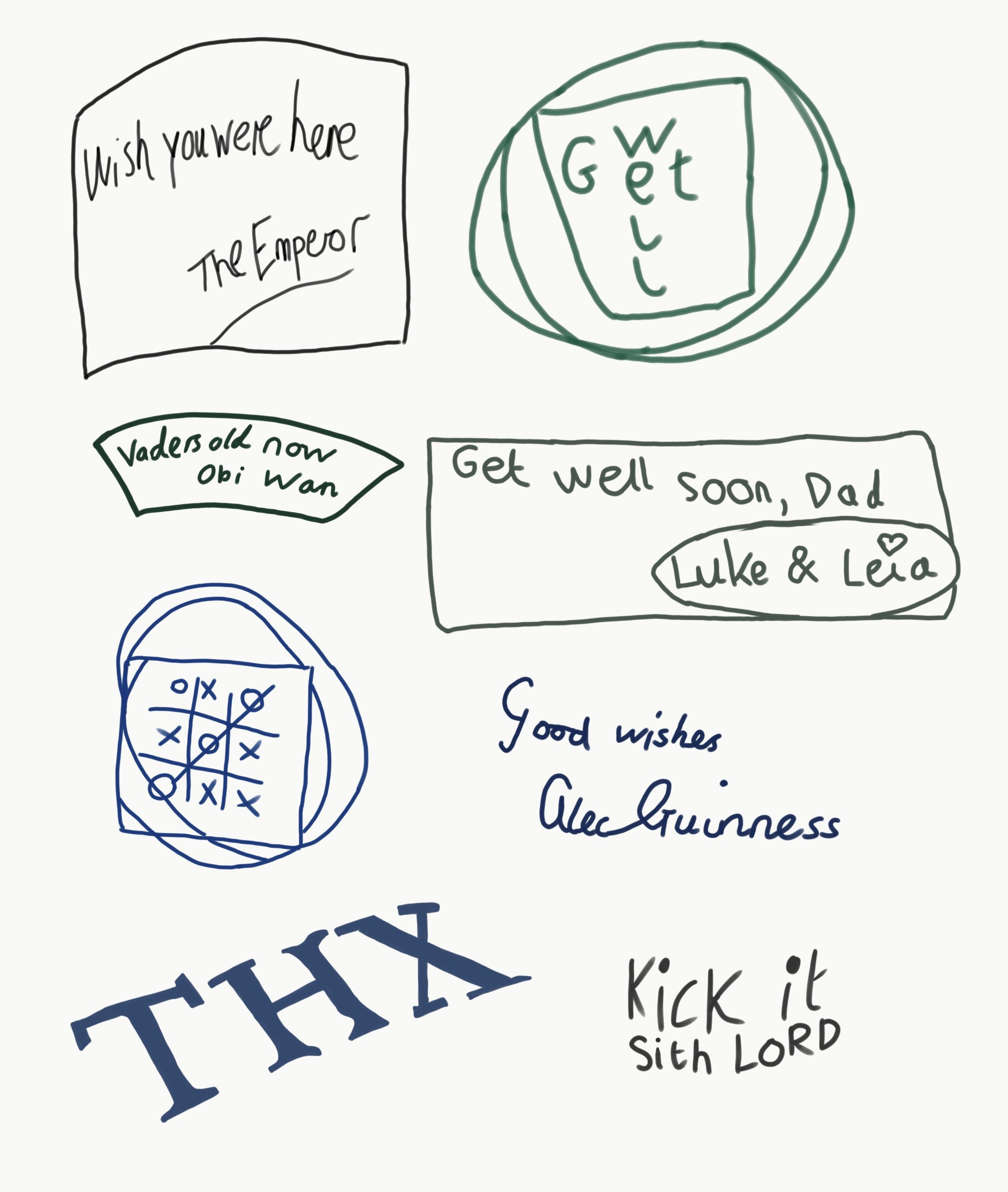 It was great discovering what all these Easter eggs said. Some of them were quite hard to read. “Kick it Sith Lord” was almost illegible. Alec Guinness’s last name closely resembled a squiggle.

Remarkably, LEGO appears to have included a reference to alcohol on the bandages. That’s right, the family friendly brand included the comment “No more beers for you 😊 The Emperor”. In fairness, the comment was one of the hardest to read (so any children watching would have to put a lot of effort into deciphering the Palpatine’s scribble to read the reference).

I was unable to work out if there was any significance to the dark purple signature in the image below. If you have any idea, please let me know in the comments section below. 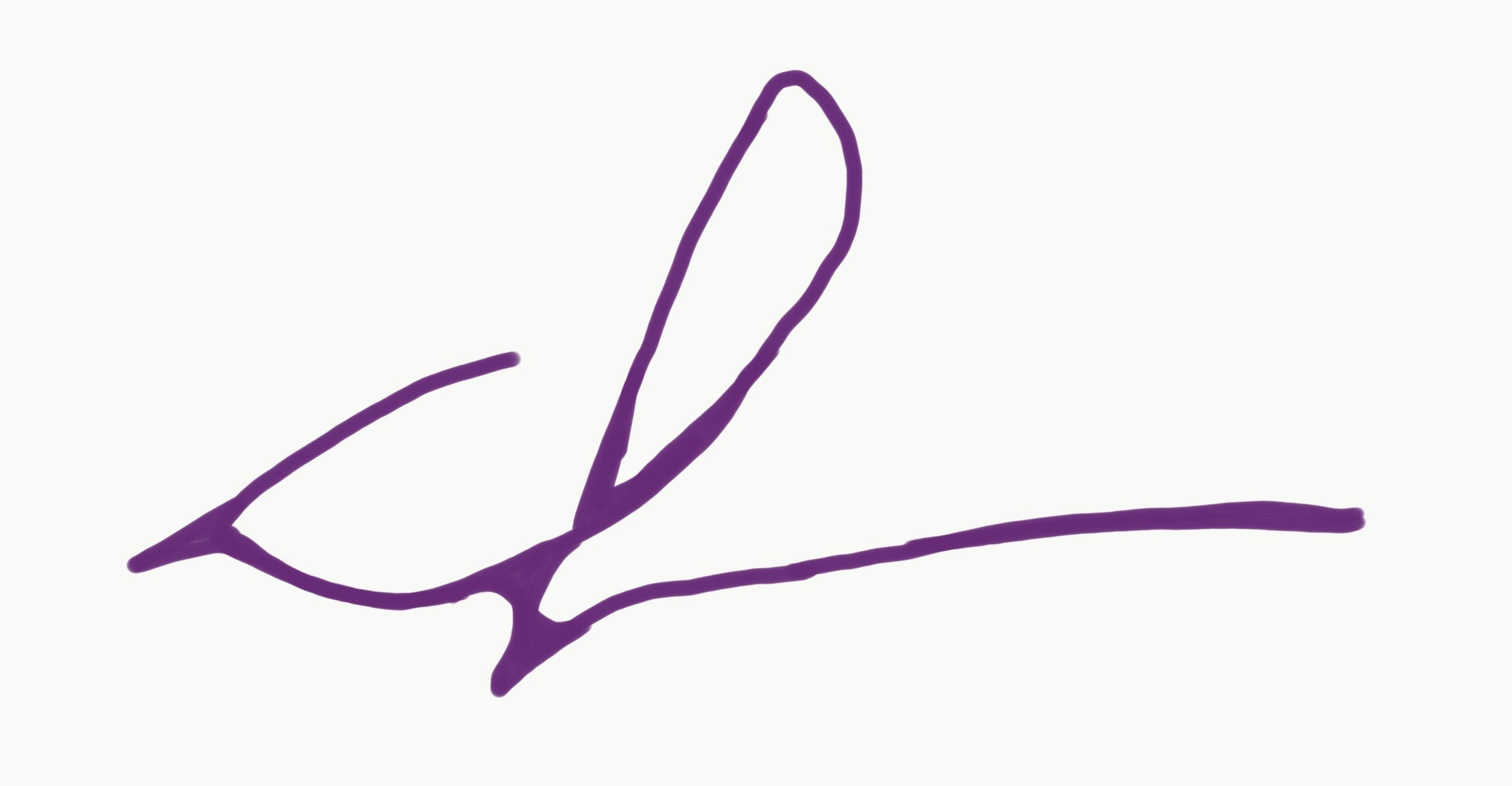 On the TV we can see Vader watching the opening scene to Indiana Jones, Raiders of the Lost Ark. If you are interested in acquiring some Indiana Jones figures FireStar Toys sells a bunch of them. However, I’d recommend purchasing them quickly as Indiana Jones is a retired LEGO theme meaning it may be hard for them to restock the figures.

The Emperor appears to have gifted Vader some flowers, a card and a framed photo of himself.  A self aggrandising gift from a self-obsessed Emperor. I recreated the photo of Palpatine below on the off chance one of you wanted to frame the image and put it on your desk. 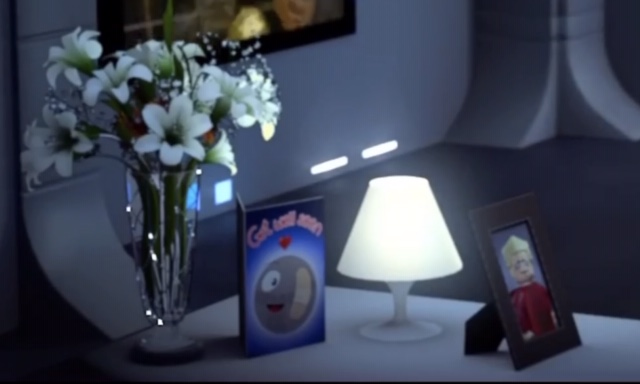 If you wanted to purchase this handsome Chancellor he can be bought from FireStar Toys. 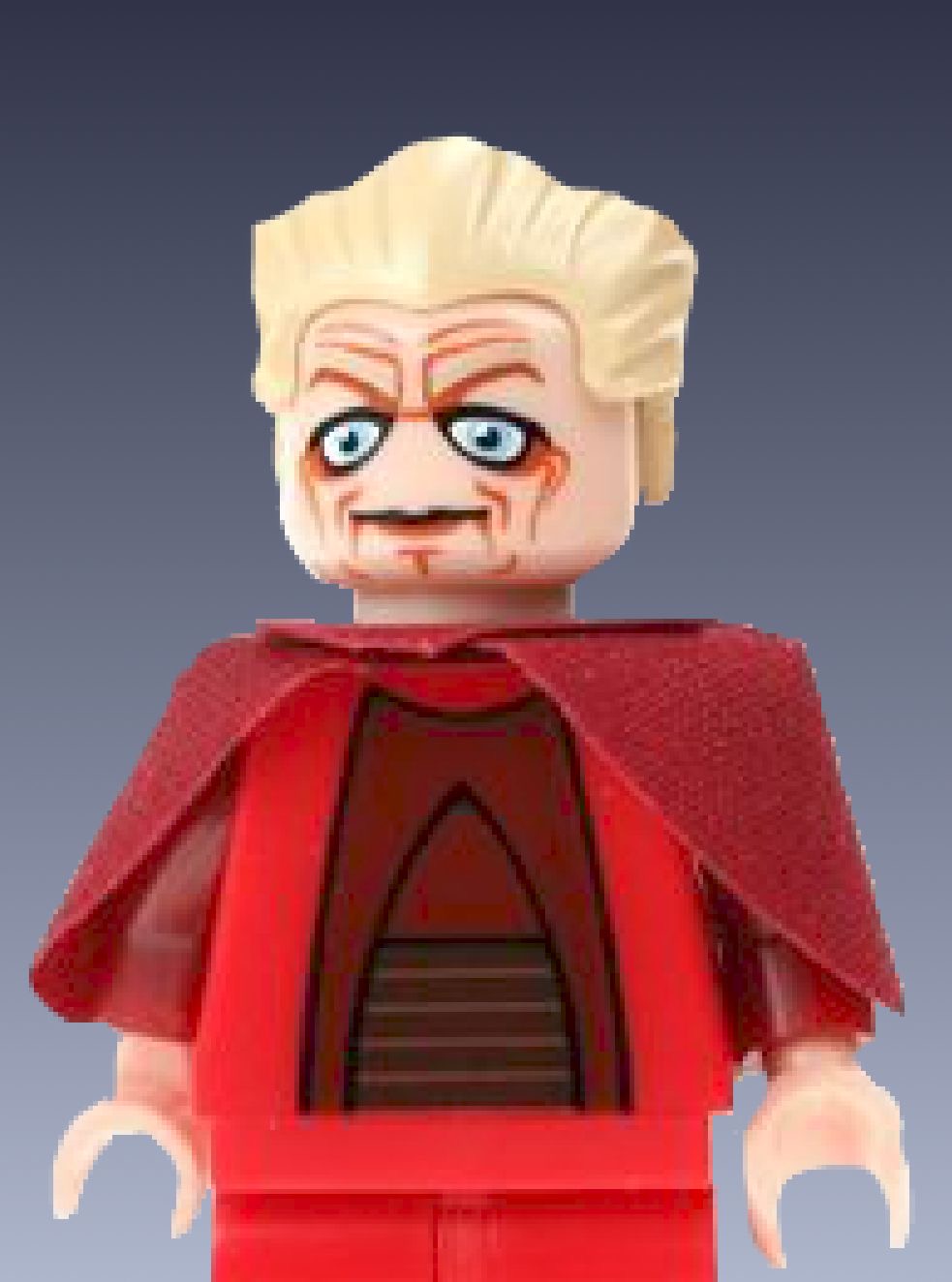 Darth Vader commissions Boba Fett to capture the Gungan cleaner. As Fett leaves, Vader changes the channel to watch “Cooking with Jabba”. I hope your reading Disney. This would make a great programme to add to Disney Plus. 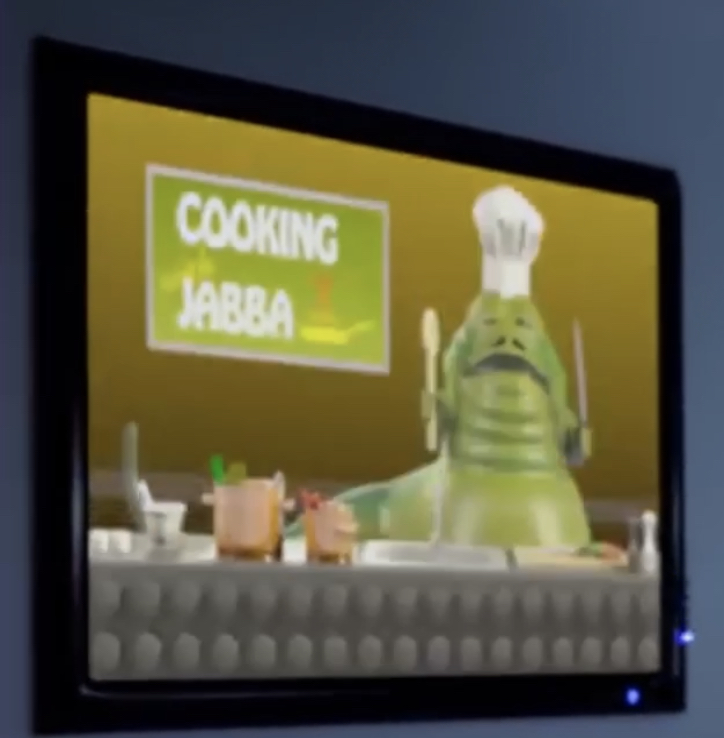 Why not build a LEGO Cooking with Jabba diorama? All you need is Jabba, a chef’s hat, a frying pan and roast turkey piece to recreate this iconic scene.

We next see the cleaner in the Mos Eisley Cantina. This scene is full of Easter eggs. As Boba Fett enters you can see an illuminated green sign promoting Yoda’s Soda’s. The Cantina is full of different characters from across the Star Wars franchise. Kit Fisto, Jawas, Wuher and Nute Gunray can all be spotted. 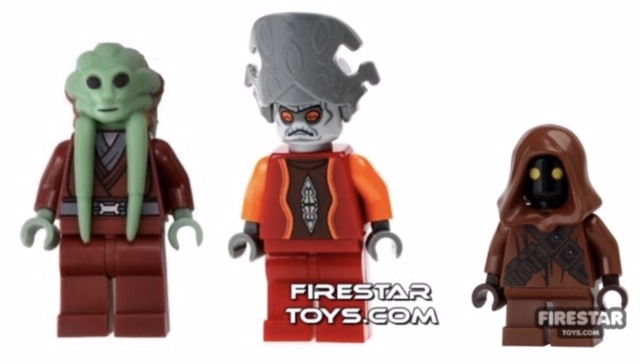 Mola Ram from Indian Jones can also be spotted in this scene. 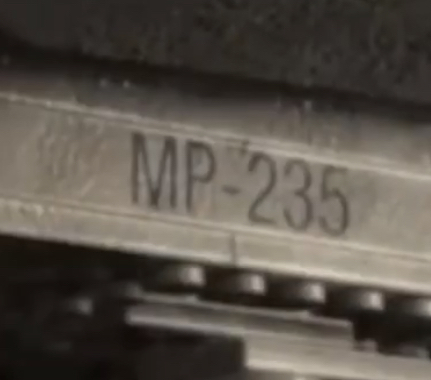 This code was quite an enigma to me as a child. I had no idea what it meant. Turns out, this was a code for a free to play online LEGO Star Wars game. Entering this code would unlock Palpatine’s shuttle.

Boba Fett uses a grappling hook to attach himself to the Falcon as it takes off.

The Falcon lands on the Death Star.  A second game code can be spotted at the top of the Hangar. 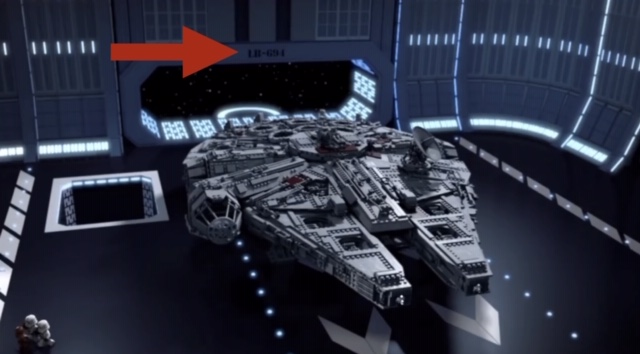 Later in this scene we get a third Indiana Jones reference as Indy is chased down the corridor by a boulder.

The Gungan cleaner accidentally hits the self-destruct button on the computer panel. The station explodes, sending debris falling onto the ice planet Hoth.

In this scene we witness the battle of Hoth. Discussing this scene is particularly pertinent now because LEGO recently revealed a new AT-AT set to celebrate the 40th anniversary of the Empire Strikes Back. 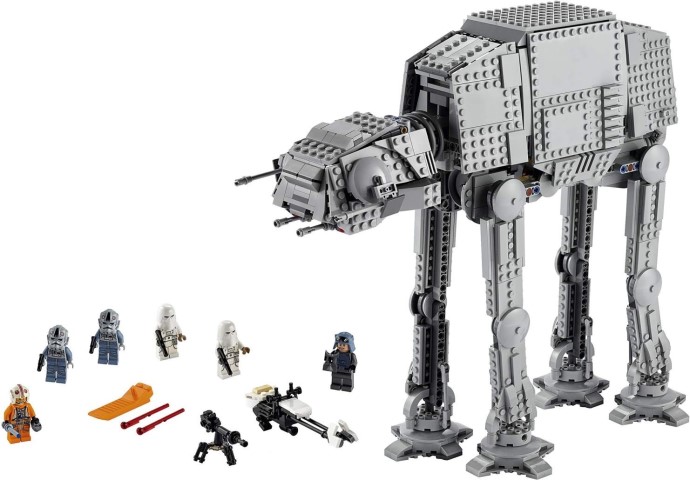 If you can’t wait for the set to come out and need seem Hoth merchandise to keep you going, check out FireStar Toys selection. They sell all sorts.  I’m personally obsessed with FireStar Toys custom printed arms. They would work perfectly with the AT-AT drivers, snow troopers and snow speeder pilots that will be included in the new AT-AT set.

At the end of the battle, a Wampa throws the cleaner back too Tatooine.

In the next scene Boba Fett attempts to kill the Gungan. However, he is knocked off the Dessert skiff and swallowed by the deadly Sarlacc.

Replicating this scene in LEGO couldn’t be easier. FireStar Toys actually sells the LEGO skiff without any minifigures. You could also purchase a LEGO Sarlacc to swallow Boba Fett.

At the end of the scene we see the Sarlacc burp Boba Fett back out. I always knew he survived!

In the next scene we see the Gungan Cleaner celebrating the destruction of the second Death Star. Whilst dancing he has a grand idea.

He decides to eject the contents of his vacuum cleaner, building a Gungan head shaped concert stadium. How isn’t this a UCS LEGO set? What on earth is LEGO playing at – THIS NEEDS TO HAPPEN! 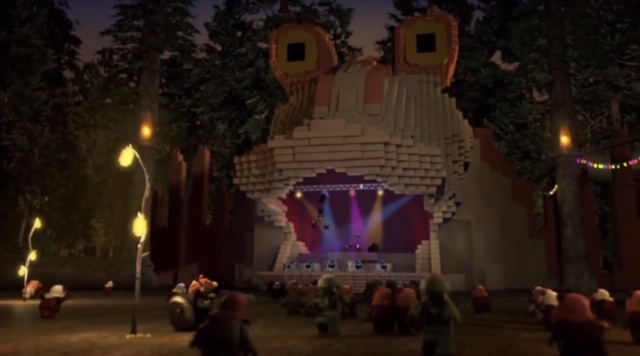 If you wanted to try and replicate this scene at home, you can. FireStar toys sells a series of guitar, drums and even a trumpet piece. Try searching music to see some of the awesome parts and custom mini sets that are available.

The closing scene shows the Hospital Ward. Darth Maul, Bossk, Nute Gunray and a Tusken Raider can all be spotted.

The film ends with Boba Fett and Vader fighting over the TV remote.

Bombad Bounty is a great 5-minute LEGO short. Did you enjoy watching it? Do you have a favourite scene? Let us know in the comments section below.

All the images were taken from the Bombad Bounty film and Brickset. The gifs were made with ImgPlay and the crawl was made using Star Wars Intro Creator

LEGO Minifigure Skin Colors: How Many Are There?

LEGO Mandalorian: All the Official and Custom Parts from the Show