LEGO has produced over 50 Minecraft sets since they launched the theme in 2013. Lots of these sets recreate buildings or scenery that you can find whilst playing the game. LEGO has produced sets that depict Villages, Pillager outposts, jungle temples and even ocean monuments. However, LEGO has also created builds that cannot be found in Minecraft. Sets like the Waterfall Base and the Chicken Coop were plucked from LEGO designers’ imaginations. These structures don’t naturally generate within Minecraft.

This gave me an idea! Why not try and build these sets in Minecraft? In this article, I attempted to recreate two sets from LEGO Minecraft within the game. 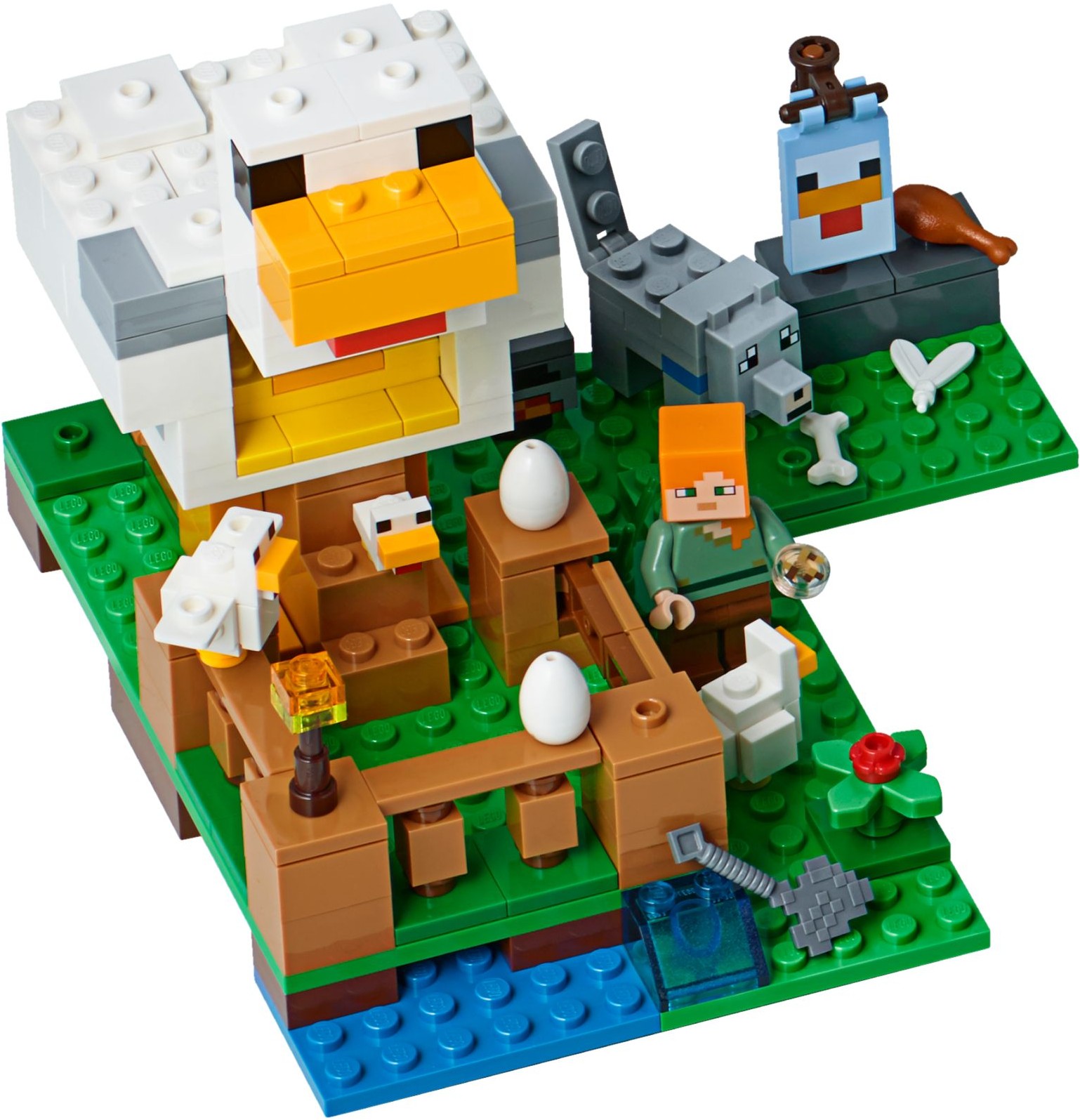 First, I began by trying to recreate the Chicken Coop. Set 21140

, The Chicken Coop, was released back in 2018 and retailed for £20. The set included an Alex minifigure, multiple chickens and a tamed wolf. I chose to replicate this set for two reasons. Firstly, the chicken build looks absolutely magnificent. I love how the designers scaled up the Minecraft chicken to create this awesome farm design. Secondly, the set was fairly small. I didn’t want to build anything too big in case replicating the set proved to be nightmarish.

I started by building the far right-hand corner of the set. This proved to be extremely challenging. In the set, there’s an azure banner with a chicken sticker on it. After a great deal of research, it turns out that this banner cannot be replicated in Minecraft (without making use of a texture pack, mod or some string of commands that I would be unable to fathom). At first, I decided to try and design a similar banner myself but it turns out that making banners in Minecraft is a complicated art form that I have absolutely no talent for. Eventually I decided to give in, and look up chicken banners online. The design I used was one which I found on the planet Minecraft website by a user called Radrobin25. 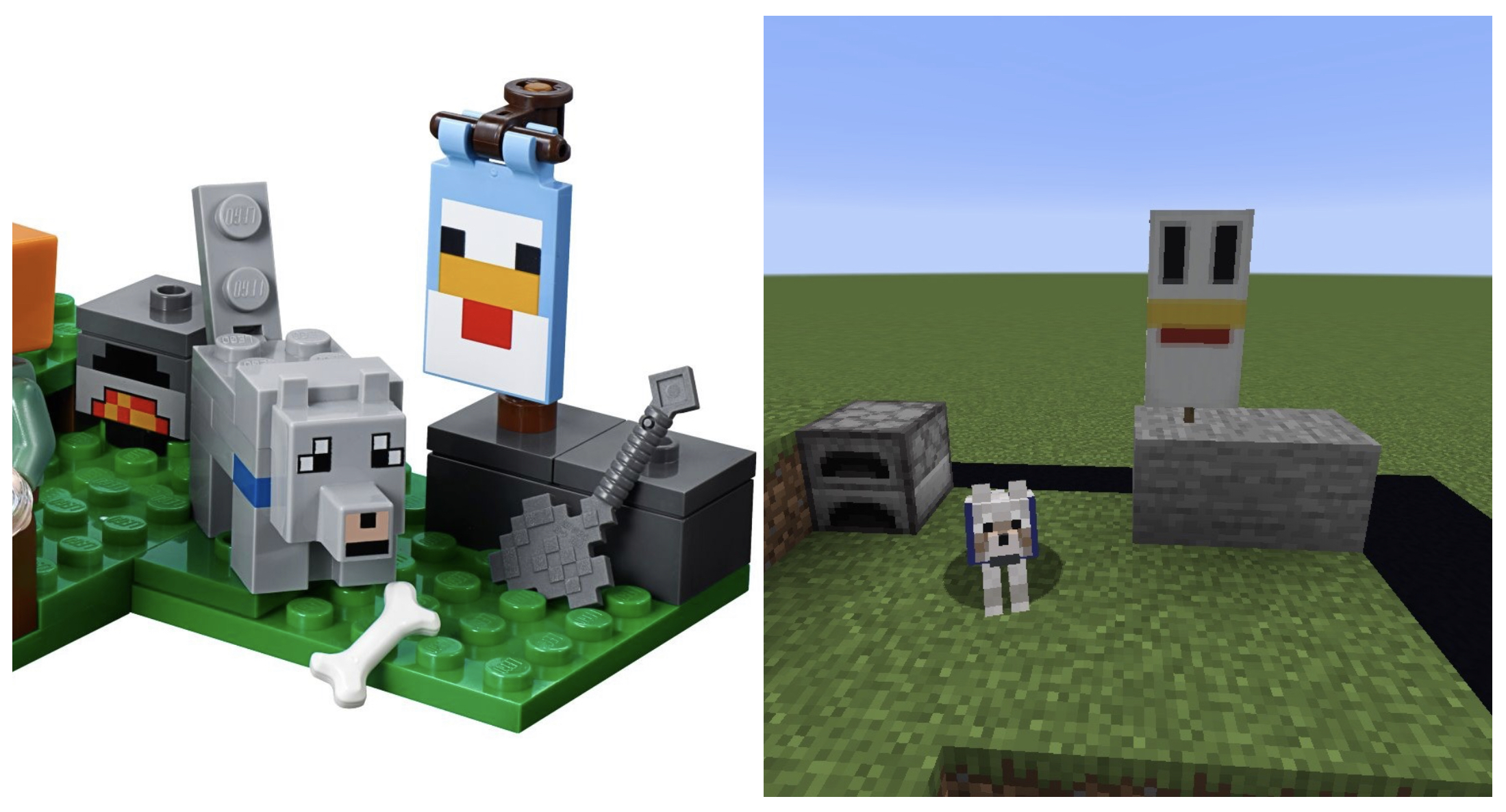 The next hurdle was the axe that can be seen resting against the exposed stone blocks. Unfortunately, Minecraft tools cannot rest against the side of blocks (I could have used an item frame but I ultimately decided that this would detract from the build). Placing in the furnace was really easy. The tamed wolf was also a small hurdle, as I struggled to decide what Minecraft colour was being represented by its collar. I spawned a wolf and tamed it with some bones. After dying its collar with light blue, blue and cyan dye, I eventually settled on blue dye. I then pushed him into the correct position. I kept him from moving by forcing him to sit.

After adding the wolf, I moved on to the chicken pen itself. I started by adding jungle planks before adding fences on the necessary blocks. It was around this point where I encountered the first scaling problem. In the LEGO build, there is one gate that spreads across four studs, but most LEGO Minecraft sets use 2 studs as the width of a block. In an attempt to resolve the discrepancy, I used two gates. LEGO’s build looks wonderful, but it doesn’t prove very effective in the game because the chickens were able to jump on to the jungle planks and escape their pen. I had to use barrier blocks to prevent them from staging a break out (barrier blocks are invisible blocks that can only be accessed using commands when cheats are enabled).

The instructions show an egg piece on one of the jungle plank blocks. Like Minecraft tools, chicken eggs can’t be placed in Minecraft. Although Minecraft chickens lay eggs, the eggs vanish if they aren’t collected by a player within a certain amount of time. Fortunately, I found the perfect substitute. I used a turtle egg as these can be placed down. Then I surrounded it with invisible barrier blocks to prevent it from hatching. I had considered using a dragon egg, but that would have been the wrong colour.

The LEGO set has a clever action feature. Eggs that are laid in the chicken build can be collected in the chest underneath. This wasn’t easy to replicate. I used commands to create 2 minecart hoppers inside the yellow concrete blocks. This meant that any eggs laid on the concrete would be collected by minecart hoppers, before travelling into the chest. 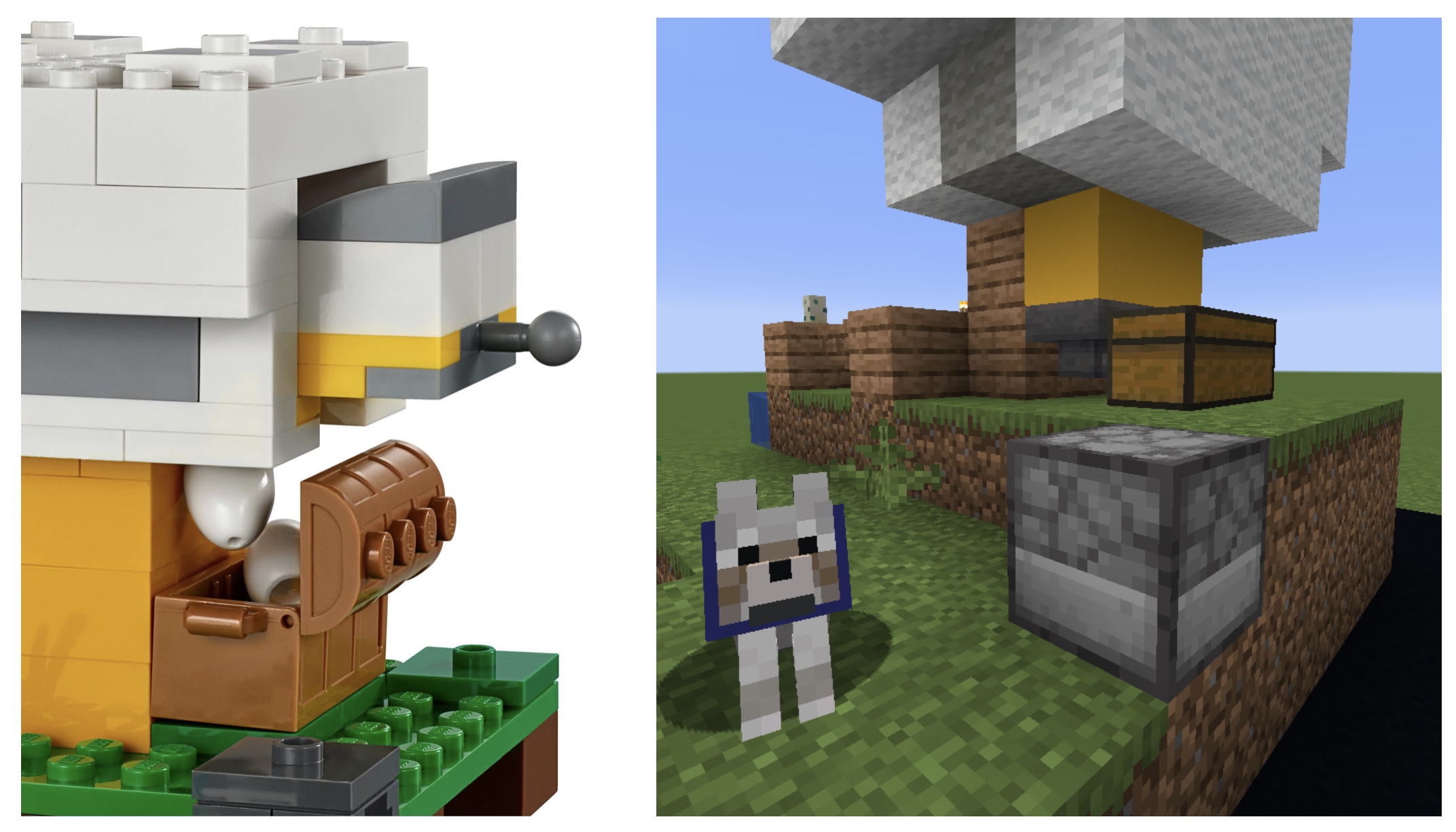 After completing the chicken coop, I decided to move onto a more ambitious project.

set was released back in 2017. The build retailed for £75 and included Steve, Alex, an Enderman, a Zombie, a cat, a blue sheep and multiple fish pieces. This build contained 729 pieces, making it nearly four times larger than the Chicken Coop. 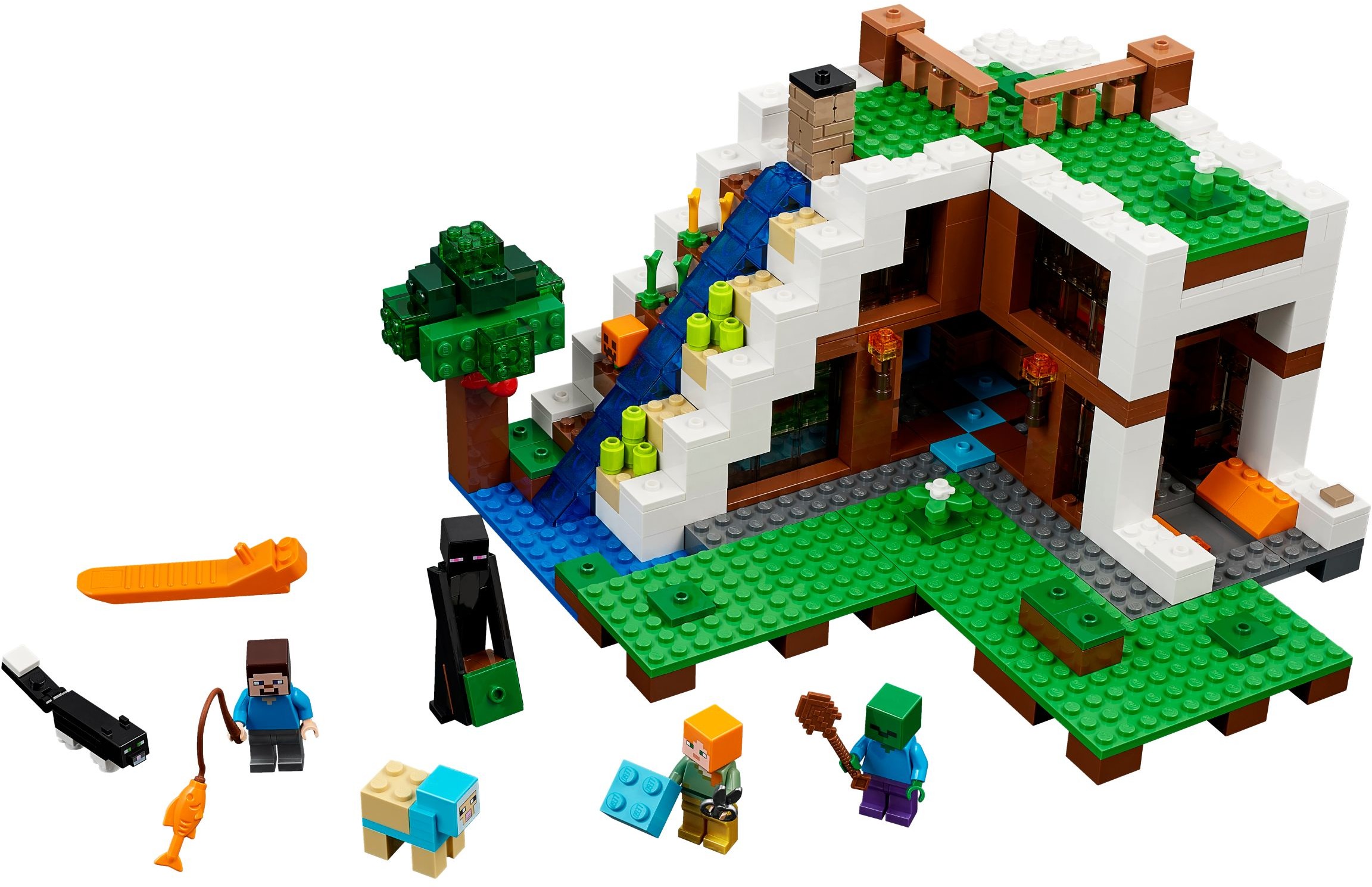 Recreating the set proved difficult as several of LEGO’s part choices appeared to have no equivalent in Minecraft. For example, LEGO had crops (such as sugar cane) growing up the waterfall on what appeared to be sand slabs. Unfortunately, there aren’t sand slab blocks in Minecraft. The closest substitute was sandstone slabs. These worked fairly well, although you can’t plant crops on sandstone slabs. LEGO’s chimney used tan brick pieces. I couldn’t find any block that resembled this. Ultimately, I used stone bricks to create the chimney (although with hindsight, sandstone may have been a good choice). I also considered using bricks, but they stood out too much.

Placing the mobs proved especially challenging this time. I decided not to place any of the hostile mobs, as Enderman teleports so it would have been tricky to make the creature stay in one place. I also didn’t want to place a Zombie as it would burn in the sunlight.

Spawning the cat was also hellish. When you spawn a cat in Minecraft, it can be one of many different breeds. Getting the correct cat took a lot of… “trial and error”. It was not a cheerful process!

The interior was a little easier to build. I placed item frames to display the diamond sword and fish, two double chests and three crafting tables. Choosing which fish to use was itself problematic, as there are no displayable silver fish in Minecraft. I ultimately used the common cod.

LEGO’s bed was 6 studs long, meaning it would translate to approximately 3 blocks in Minecraft. Unfortunately, Minecraft beds are only two blocks long. To resolve the size discrepancy, I added a nether brick slab to the end of the bed, making it 3 blocks long.

Whilst researching for this article I was informed of a YouTube video by Grian. He did a fascinating experiment where he timed himself building a LEGO set and then building the same thing in Minecraft. It was a fascinating watch. I wholeheartedly recommend you check out his video on the subject.

Have you ever tried to build a LEGO Minecraft set in Minecraft? Let me know in the comments section. I found it quite challenging. Interestingly, having built the set in Minecraft, I have no compulsion to buy the LEGO set. I recommend trying to build LEGO Minecraft sets in Minecraft as it may help you decide whether the sets are worth spending money on. If you enjoyed this article, keep checking out FireStar Toys blogs for more fascinating articles. If you didn’t like this article, let us know why in the comments section, and then keep reading FireStar Toys blogs anyway, because there are some great bloggers here. We welcome feedback.

Only 56 Minecraft cats were killed in the making of this article.

The set and instructions images in this article were taken from Brickset and LEGO. Minecraft images are from the game.