I remember when I was a child growing up, my dad always had an aquarium. I would stand and watch the fish swim for hours. Their colors and shapes were fascinating. I always enjoyed the gentle sounds of the bubbler giving out oxygen into the water. Also the sound of falling water: the filter, gently cleaning the water and sending it back into the tank.

As I finished college and moved out into my own apartment, one of the first things I set up was my own aquarium. I stocked it with fish, and gravel, and a small sunken ship. I continued the tradition that my father began. That wonderful set up lasted until one day my wife accidentally smashed the glass. A small crack suddenly became a large hole, and water spewed everywhere. Sadly, since that catastrophe, I haven’t had a new aquarium.

But, I have thought a lot about how I would set up a new aquarium, and which kinds of fish I would put in it. I have also thought about which decorations I would want to submerge for the fish to swim around. And that brings me to my love of LEGO!

Can LEGO go in an aquarium?

The very short answer is “Yes!”. The longer answer is this: LEGO can go in an aquarium. Of course, you can dunk anything in water. The question is, “can LEGO be put into an aquarium with fish in it, and will the fish be unharmed?” Again, the answer is “Yes! Absolutely!”

Most LEGO is currently made out of ABS plastic. The only exception is some newer plant elements being made out of plant (actually, sugarcane!) based plastic. But both elements are nearly identical in look and feel.

What matters in an aquarium, with live animals, is any element in the water which would leach harmful chemicals into the fish’s environment that would cause them to become sick or die.

For this reason, many metals are unsuitable for inclusion in an aquarium because fish are very sensitive to minerals and metals in the water’s composition. Many metals will degrade or could rust, and both processes would harm the fish.

Many commercial aquarium decorations and faux plants are made out of plastic to avoid this very worry. What you can purchase in your local pet store is already safe for aquarium use. Usually a quick rinse to take off any oils or residue, and the decor is safe to submerge and enjoy.

The ABS, and newer sugarcane plastics, are non-biodegradable. This means that the plastic will not break down due to natural processes, and in an aquarium, will not leach chemicals. The ABS is meant to last a very long time and remain durable, even underwater!

Feel free to submerge your LEGO in your aquarium!

However, a few guidelines:

What should you include?

So what LEGO should you put in your aquarium? I am so glad you asked! I have a few suggestions that I think would make great LEGO scenery for your fish.

First, LEGO Classic or Creator 3-in1! Just get building. Using ordinary bricks, you can build anything. Your imagination is the limit. However, LEGO has already given you a head start. With #31088 Deep Sea Creatures you can build a shark and a crab, or a squid, or an angler fish! Build a school of LEGO fish. Build rocks and outcroppings. Or build a seaweed jungle for the real fish to swim through. Whatever you can think, you can build!

Second, LEGO City! Over the years, LEGO has released a great many City or System sets that are centered around a nautical theme. The current #60221 Diving Yacht comes with two minifigures in diving gear, a shark, and undersea treasure! Perfect for the beginnings of an underwater build. Complement with bricks from your own collection to build some submerged scenery and there you go! If the water in your aquarium isn’t too high, you could even put the floating boat on top of the water and watch it ride the currents caused by your filter or bubbler. 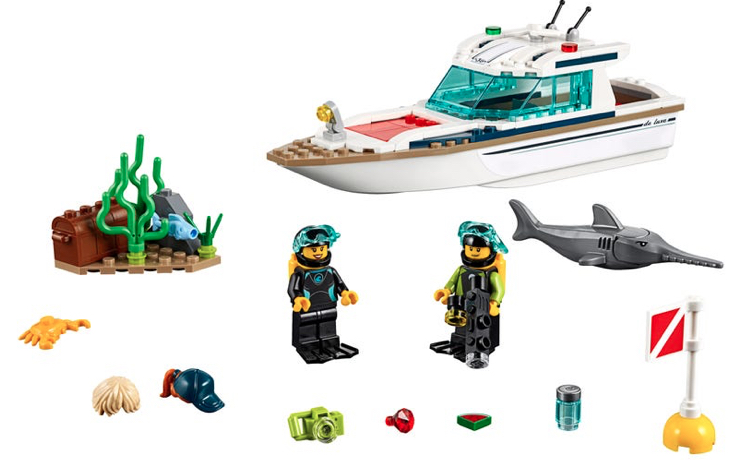 Third, LEGO Star Wars! Now, this is my grand idea, and it would take some creativity and a little third-market buying to make happen. LEGO first released the #7161 Gungan Sub from Star Wars: The Phantom Menace in 1999. Today it is hard to come by, but I would love to create a Naboo scene in an aquarium complete with a Gungan sub. If you wanted to build your own Gungan city from that film, you could populate it with Gungans. FireStar Toys has a few to choose from.

The surface is the limit!

Whatever you choose to build, it looks great underwater. My brother has some Aquanauts sets from the 90’s in his aquarium. Remember my aquarium, the one my wife broke? I had a Deep Sea diver in mine. He was anchored by a bit of fishing line, that from the right angle, you couldn’t see. It was the perfect illusion of a tiny diver surrounded by large fish at the bottom of the ocean. I loved seeing him in the aquarium every time I walked by. 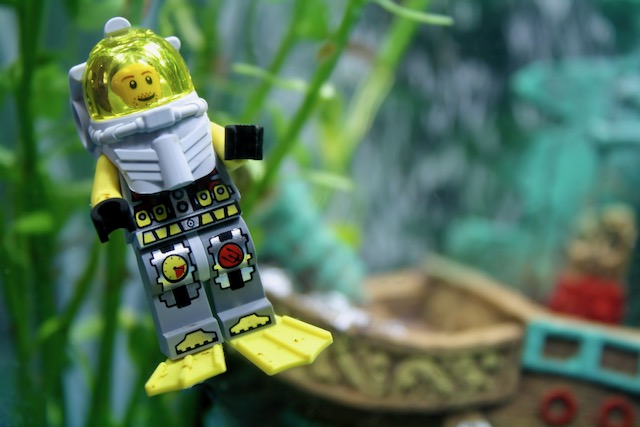 Will you build an underwater city? A sunken ship laden with treasure? A submerged research laboratory? A few divers enjoying a coral reef? That is what I love about LEGO! Anything is possible.

If you do choose to build something out of LEGO and add it to your aquarium, do contact us with a picture and let us see what you have built! Reply to this blog with your photos. If we get some, I would love to do a follow up post and include your photos!

As always, whatever you choose to build, I look forward to what we can build together!

Breaking Down The Daily Bugle Minifigures