I was sitting on the couch, surfing the web, my cats sleeping next to me, the relaxing silence of the day all around… and suddenly, it hit me. I checked the calendar to be sure, and suddenly my calm attitude took a 180 degree turn and a little voice inside my head started screaming!

My dad’s birthday was next week and I didn’t know what to get him!

Of course right after that I remembered two of my friends giving birth soon, another friend getting married, one who was about to propose, a cousin who got a new job, mother’s day, father’s day, summer vacation, Halloween, Thanksgiving… and before I knew it, I was thinking about Christmas presents! The year was almost over!!!

I do tend to carry away from time to time. Fortunately, before I could have a proper nervous breakdown (!) my dad called my name and I came back to the current day. He asked me what was going on, and I told him about my troubles (without mentioning his birthday, of course).

Do you know what he said? “Tell me, what was the name of that blog you were writing for?” I was surprised. He knew I was writing for… and then (finally) the penny dropped. I admit, I was a bit ashamed for not thinking about it, but so relieved I had this wise man to remind me.

Now I knew what I was going to get for my friends and family for their special occasions.

I decided to start with torsos. They have always been the hardest to choose when I wanted to create my own LEGO minifigures, so better get them out of the way first. Since my dad’s birthday had the closest date, I started looking at custom birthday torsos and found these:

Now I could just sit back and enjoy as my dad looked at his personalized torso in shock – and whoever else I decided to give this to. It would be truly unique!

The card and the gift would look very cool in the hand of my custom minifigure. But that cake… I’ve loved it since LEGO first released it last year, it was a perfect stand for any minifigure who had a little mischief in them!

Next on the list was Mother’s Day. I felt lucky, because it had already passed in the UK, and since Firestar Toys was based there, they already made some new awesome torsos. All I had to do was pick one.

Well, I picked three. I loved the idea of writing my own text, but a more generic torso for several friends sounded good, too. And of course I just couldn’t resist the little space-baby torso. That was reserved for someone truly special. If only there was a cat-mom themed torso… oh well, there’s always next year!

These special ladies needed some accessories too. I was thinking about flowers, but before deciding on something, I typed “mum” on the search bar and came across something even cooler! There were so many options, but alas, I had to choose once again. So I picked the following three.

The printed brick, the baseplate and the cup were great, but what truly captured my attention was the special packaging. Not only the minifigure was going to be custom made, but the package it will arrive in would have a personalized message! They have thought of everything! 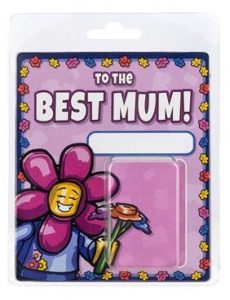 After seeing all the cool stuff they made for Mother’s Day, I was optimistic that I’d find something suitable for Father’s Day as well. I have to admit, I was a bit disappointed. True, there was still a month till the big date, and I was sure the team had already started working on something awesome, but I was expecting a little bit more. Still, what they had was acceptable, at least for what I had in mind.

Okay, so it was obviously too late to get the “It’s a girl” torso for my dad, but he already had a brand new birthday torso so he wouldn’t mind. However, one of my best friends was about to become a father and it would be so perfect for him. Besides, if my dad started nagging, I could always get the “Top dad!” torso for him.

Now, as for the accessories… I’ve seen the Father’s Day card and the “Dad” brick before, but came across the ultrasound tile pretty recently. I knew my friend would be hyped to receive one, so I added that to my ever growing list, too.

I’ve decided to leave the fall holidays alone for a while. Let’s face it, I had another six months or so to worry about them. Speaking of faces… I needed some for my custom minifigures! After spending what seemed like infinity going through all the heads available, I picked my favorites and the presents were one step closer to completion!

A drunk birthday girl, a superhero mom, and a face that looked very much like my best friend were my first picks. The other two resembled older women, and since I was going to send them to my aunts, seemed appropriate.

He doesn’t admit it, but my dad becomes grumpier by the day. So I picked a grumpy-old-man head which would be perfect for him. A worried father-to-be, a happy birthday boy, a cool dad who knows how cool he is and a guy who creepily reminds me of Tony Stark… which was supposed to be a birthday present for my cousin. Huh… I should probably write an Iron Man joke on his card 🙂

And with the heads picked, I was done! Well, at least for now. Of course there was still the legs and the hair to think about, but you could never know who’d be reading this post, and there should be at least some element of surprise, right?

But if you can’t wait to create your own LEGO minifigures, I suggest you go to firestartoys.com now and see for yourself the variety of pieces available. You may end up spending the rest of your day there, but I promise you it’s worth it!

LEGO Mandalorian: All the Official and Custom Parts from the Show