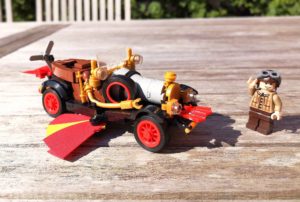 Back in April I highlighted @allyouneedisbricks as he built a tiny custom LEGO car. This month I am back with another custom LEGO build spotlight featuring @gunnbuilding and his LEGO Chitty Chitty Bang Bang!

After admiring the pictures, I contacted @gunnbuilding, a Lego enthusiast from the Isle of Wight, and asked for an interview. He kindly agreed.

PhilRedBeard: Why did you build Chitty Chitty Bang Bang?

GunnBuilding: I started Chitty Chitty Bang Bang because I wanted to fulfill a promise I made to myself as a kid. Late last year I built a Minifgure scale Bentley Blower. That build used a few interesting building techniques for the wheel placement and chassis. Thinking they might be interesting, I decided to use them in a Chitty build. As I grew up watching Chitty Chitty Bang Bang, falling in love with the film was inevitable. The story is imaginative and the car is just beautifully designed. The film was probably the first ‘steampunk‘ film I had ever watched. After reading up about the history of the film, I decided to buy the original book. It’s quite different from the film version, and so is the design of Chitty. I love both versions of Chitty; there’s so much imagination behind the stories.

GunnBuilding: Building Chitty presented a lot of head scratching moments. In the past I had made a few attempts at building her, but they were never accurate enough. The biggest issue I had was to capture the shaping of the boat-like cockpit; there’s a lot of curves and shaping in the design. I was fortunate enough to have plenty of old hinge plate elements to use in the chassis. The archway bricks and the driver’s seat are actually placed upside down from the rest of the model. Connecting the wheels was an equally difficult challenge, they’re antique LEGO wheels that have a metal pin axle and they would originally connect with a 2×4 brick element with pin holes in. If I used a brick like that it would have made the build far too blocky. 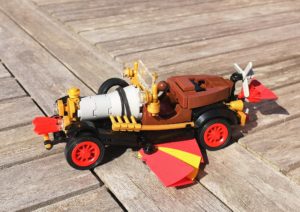 I came up with an alternative technique using droid arms and pneumatic tubing. Designing the wings also presented a challenge. Initial ideas varied from using wedge plates or tiles, but I found that folding LEGO Minifigure Capes and connecting them all via the neck holes gave a more accurate wing design. I may do a breakdown/cutaway of the Chitty model in the future so that other builders can see how everything is connected.

GunnBuilding: From a very young age I played with LEGO a lot. My dad collected it and so did my brother. As I got older I bought more LEGO sets and whenever my birthday or Christmas was near I asked for LEGO. When I hit my teenage years I built more of my own creations (LEGO MOCs) and this continued to the present day. I hold the old Adventurers theme in high regard because I’m a lover of vintage cars, Egyptology and 1920s style. And so many of those sets had wonderful designs and concepts that inspired me over the years.

PhilRedBeard: Thanks for talking with me. As we close out the interview, what are your top three “must buy” LEGO sets?

GunnBuilding: Many thanks again for the opportunity to be interviewed. My top three must buy LEGO sets are:

I absolutely love seeing pop culture icons recreated with LEGO bricks. Whether it is the deLorean from Back to the Future or the TARDIS from Doctor Who or Chitty Chitty Bang Bang from the classic film, the intersection between visual and physical art is fascinating.

What do you want to translate from culture to creation? Put it in the comments and let everyone know. And then get building and post a photo so we can all see it!

I look forward to what we can build together.

Just a reminder, I am running a contest over on the minifigures.com blog. You could win your very own John Brick Minifigure!

Interview with an AFOL: minifignick