Custom LEGO means many different things. It can pertain to custom printed bricks, or unique builds, or simply altering an existing LEGO set or build. You as a builder have many options when it comes to customizing your LEGO and with little effort. 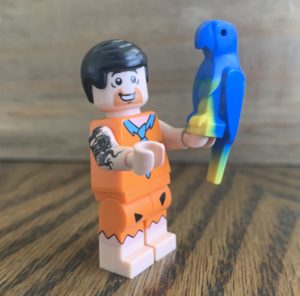 I recently placed an order on FireStar Toys and in so doing did not have any parts in mind. I browsed the catalogue and waited for inspiration to strike. When it did, I added the items to my cart. Because they are in the UK and I am in the US, it took a few weeks to receive my order, but when it did, I was blown away. The quality of their custom printed parts was excellent, and their selection of official LEGO bricks did not disappoint.

First in my order was a tattooed light-flesh colored arm. I recently had purchased from LEGO my own LEGO 21316 Flintstones Ideas set, and had a laugh. I replaced one of Fred Flintstone’s arms with the tattooed arm! Suddenly, the story flashed into my head: Barney and Fred, after work and a few prehistoric brews, Fred decided to get a triassic tattoo. In typical Flintstone fashion, I don’t think this would go over well with Wilma.

After all, that is what LEGO is really all about: the stories told through the bricks and the builds. A house? Who lives there? A car? Who drives it? A tattooed arm? Who got the tattoo, and why? 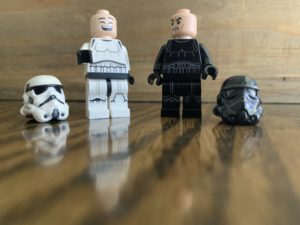 Second on my list was a new head for a stormtrooper. LEGO stormtroopers suffer in many ways. Not only can they not find the droids they are looking for and have terrible aim, they also all look exactly alike. Poor troopers. I want a bit more variety for my stormtroopers because I like to think that despite mostly being clones, they have personality and distinction. It is a fundamental factor of humanity that no two of us are alike, even twins. Our own experiences shape who we are and even your clone would not be you, because you would live very different lives.

I immediately swapped the stern, angry looking official LEGO head with a custom LEGO head from FireStarToys. This new head features a large grin, and a laughing face. As always, it comes back to humor for me. I imagined that the grumpy special forces stormtrooper has had enough of the guffaws from his squad mate. Meanwhile, the laughing trooper finds the ironic humor in never quite finding the right droids. 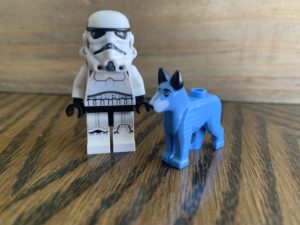 Next, I picked out a blue dog. This official LEGO dog is from a superheroes’ set featuring the wonder dog. But, I had other ideas. I am building a custom LEGO Millennium Falcon, and in so doing am crafting a Star Wars story. In this story, one of the characters (to be decided) will have a blue, alien dog as a companion. Enter Wonder Dog!

Maybe this dog is sentient? It is an idea I am throwing around. I would like to tribute Chewbacca in my own way following the recent loss of Peter Mayhew. After all, Chewbacca himself is based on George Lucas’ dog, which is in fact the same dog that gives Indiana Jones his name. Indiana was the name of Lucas’ dog, who even cameos in Indiana Jones and the Last Crusade. 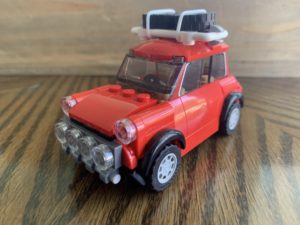 Moving more into the realm of LEGO alterations, I recently purchased the 75894 Mini Cooper set. I liked the look of the rally Mini Cooper, but wanted it to be all red without a white roof. A quick swap with some parts from my LEGO collection and voila! An all-red Mini. Sometimes I like to customize my official LEGO sets in very small ways. I will subtly alter the builds by putting asymmetrical sections on the opposite side they are supposed to, or changing around greebling, or simply swap a color. It wouldn’t ever be noticeable to anyone else, but to me, it becomes something unique.

Since 2003, and Disney’s release of Pirates of the Caribbean, I have found my love of all things pirate rekindled. I grew up on the coast of Virginia, on the Atlantic Ocean. Nautically, it was an area of the seven seas that was frequented by pirates, especially the most notorious of them all: Blackbeard! Rumors persist to this day that one of his ships sank somewhere off the Virginia coast, laden with gold and other valuables from a recent piracy. Who knows if it is true, but it fires the imagination! 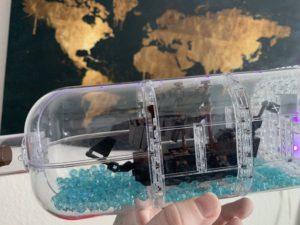 I don’t own any of the official LEGO Pirates sets, but when the LEGO Ideas 21313 Ship in a Bottle came out, I knew immediately what I needed to do. In fact, the fourth film in the franchise, Pirates of the Caribbean: On Stranger Tides, deals with Blackbeard and (spoilers!) ends with Captain Jack recovering the Black Pearl. To his dismay, the Pearl is trapped in a bottle. My own LEGO Ship in a Bottle needed to be the Black Pearl. It took some time and money to collect the black parts I needed, but in the end, it was completed. I even used an official printed tile of the letter “x” to substitute for a crossbones flag. I couldn’t be happier with my Black Pearl in a bottle!

In addition to custom printed parts and custom minifigures, you can buy almost any official LEGO brick from FireStarToys.com. Their catalogue is very extensive, and very reasonably priced. I am a brand ambassador for FireStar Toys, but they in no way compelled me to write this post. In fact, this is less advertisement and more encouragement. However, or from whom, you source any LEGO part, custom or not, I think the story that you are telling through them is the important part. (I bought my Black Pearl parts from BrickLink.) LEGO itself encourages unique building and the fostering of story and imagination. That is why the bricks exist in the first place. There are millions of combinations for even the most basic bricks, which means there are millions of stories waiting to be told.

What story will you tell? I, of course, look forward to what we can build, and tell, together.

Bombad Bounty: A New Hope with a Mop!