I usually visit old sets to get ideas for my various MOC (My Own Creation) projects. Since the majority of my sets are from 80’s and 90’s, it’s like visiting old friends for me. Sometimes I just get curios and check up on the evolution of certain themes, to see how much they have changed. The LEGO police force is one such theme. It’s actually a sub-theme of Town/City, but a vast one at that with stations, mobile units, small squads and many more. Today, I want to focus on the LEGO Police Headquarters.

Actually, I think the setup of this set was excellent and it would really look good with modern pieces. There were nice touches on every floor. On the first floor, there was an office with a regular desk and a phone, a cell block with a single bed and two car garages. On the second floor, the interior of the office was identical, but the walkway to the helipad looked amazing. No other set paid this much attention to a helipad. The brick-built motorcycle looked outdated even then, yet the convertible police car, despite not having headlights, would become the staple of LEGO police cars to come. And just like the LEGO Fire Station (374), this set also had a US version (588), identical in every way. 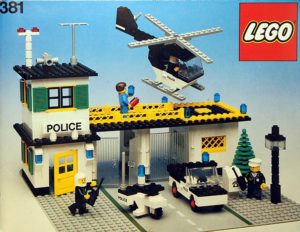 While the elements of a LEGO Police Headquarters are pretty standard, how they are presented is another story. This set was a prime example. Unlike the previous set, the helipad was integrated into the base plate. And although this set had the same number of vehicles, there was only one garage. Understandable though, because the other vehicle was a motorcycle, in its new mold. There was a cell block of course, and the office was larger and had computer support now, in addition to the usual desk and the phone. 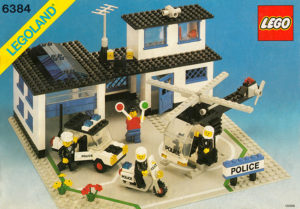 So it’s a ‘Command Base’ now. It sure was. Because when you look through the office windows you can see the recording devices. Obviously, the office was nicely detailed to justify the name of this set. New, large windows and glass doors seems to have carried the design of this set to the next level. The command center had two motorcycles now, and an SUV. Although, I’m not too sure about the helicopter design. It was a change, but I find it hard to say it was an improvement. 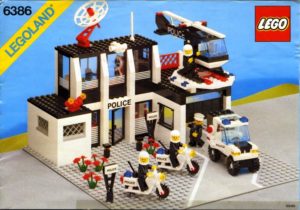 First thing first, this set was not only big, but also loaded. It was as if there were three separate buildings. Every single room was filled with computers, screens, accessories, coffee makers and etc. There were nice details on the outside, too. For example, there were four different radar dish and antenna setups on the roof of these buildings. On the contrary to the building design, vehicles were nothing special. The SUV and the car was simply boring and the motorcycle was standard by now. Not even the suspensions on the SUV could save it. But the helicopter was as beautiful as it was functional. I’m sure I could find a way to change that camera into a missile if I had this set. Take that outlaw Joe! 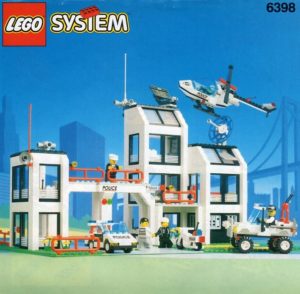 Something was different about this set. It looked more fun and playable than previous versions. It had all sorts of vehicles, a boat, a helicopter, two motorcycles, and a transport van. In addition, there was a prison cell, which was located on an island. And boy did it come with a sweet surprise! Hint: Always have an escape plan! The main building itself was also filled with nice details, including a surveillance camera. To tell you the truth, I wasn’t impressed by the looks of this set at first, maybe it was the colors, but now I’m liking it a lot. 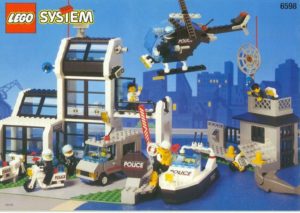 At least it was a better build than the corresponding fire station, right? But what’s with the green? Windows were green, windshields were green, visors were green, there was a green piece even in the satellite dish. I honestly believe this could have been a decent build with a nice color scheme. TLG (The Lego Group) must have thought they had something in their hands, because this set has been re-released in 2002, with the same colors. 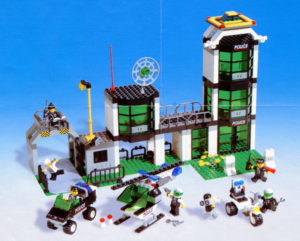 You know what? These come back sets weren’t half bad. World City, soon to be just “City”, might have been a transition theme, but TLG actually came up with very good ideas. I loved the mini panzer here. Very, very original, and sadly nowhere to be seen again. The other vehicle had nothing special though. The building had an impressive design, looking like a strong fort. I can’t imagine how anyone can escape from there. Simple in design, there was a safe room, a cell room, a forensic lab, and an office. 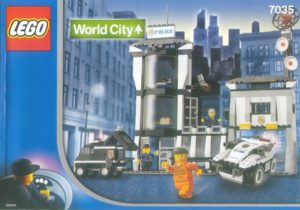 Just when I thought things were getting better… What a mess. Yes, this set had everything, from a nice helicopter, to a newly designed motorcycle. But that raised baseplate ruined everything (wait till you see the hospital!). If you ask me, the whole purpose of the raised baseplate is to make use of the pits. You know, hiding stuff under trap doors or something. Well, not here though. On the plus side, there were many rooms, varying in content. I was especially surprised by the use of a 3×6 slope as a control desk, something I’ve not seen before. Prison was also unusual in its design, kind of carved into a rock look. And finally, if you’re a dog lover, you’re in luck, this set had two doggies.

After years of trial end error, TLG finally got the formula right. I don’t know about you, but I find these light transparent blue windows very lively and very fitting for any LEGO set. With its new architecture, this LEGO police station was really exciting and full of cool details. One fun detail I have to mention is the toilet bowls in the cells, very funny. Also, there were some space under the cells. If you had enough spare pieces, you could easily improve upon the original build. The helicopter was missing this time, and the remaining vehicles were no prize either, but they were sufficient.

With its darker accents and build, the design of the station was a bit more serious than the previous sets. Maybe because of its serious tone, some of the fun details were gone, both inside and outside. The space under the cells was utilized like the car garages this time. The car was pretty generic, but I liked this SUV better than the last one. Interestingly, there was a helipad on top of the building, but no helicopter. Instead we had a bike, which was nice and contemporary.

The first thing I realized with this set was how large the cells were. Not only that, but the station building had large offices, too. The design was very different from the previous sets. It was a handsome looking station with decorative columns. The interior was filled with details we got used to by now, nothing too extravagant. Same goes for the helicopter, it was very simplistic. One major change was the inclusion of an escape vehicle. This really increased the playability of the set. One question though, do they still use ball and chain shackles in this day an age? Fun little detail I guess.

I think in 2020 TLG must come up with a new idea for a police station design, just like they did back in 2008, because the latest sets started to look way too similar in design. I didn’t see anything new and exciting in this set except for the police car, which was really sporty. On the other hand, even the look and the color of the bad guys’ truck was the same as the previous set. I’m sorry to say but it’s just a lazy design. Having a helicopter is always nice, yet there was nothing new with it either.

So, these were all the conventional LEGO Police Headquarters sets. But, from time to time TLG wandered of from this concept, trying new things to keep it interesting. Let’s see these “new things” for ourselves.

Cute station, cute car, cute boat… What’s not to like here? I really don’t need to explain at all. This was a marvelous set. You are lucky if you have one my friend. 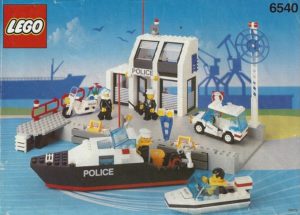 Everything was so right with this set. Well, everything except the helicopter maybe. The look of the log police station, the bear, the ATV, the SUV, everything fits so perfectly. The real question is, why didn’t I get one?

Maybe not as good as the Mountain Police Station, but this set continued the tradition nicely. It had all the necessary elements for a swamp setting. I liked the boats, but the SUV and the station itself could use a little help.

This was not a LEGO police station per se, but I wouldn’t want to miss this one out. As the name implies, it was a prison island. To tell you the truth, it didn’t look appealing to me at all. Everything looked so ordinary in this set, the boats, the helicopter, even the hot air balloon.

Now, this is more like it. Forget about the police station built onto the mountain, which is not bad at all, two cool helicopters would make for a great action game play. Not only that, but the SUV was also cool. I don’t care much about the tree guy but how cool is that mountain lion?

Wow, after seeing all the sets together, you can really see the difference from one generation to the other. Not every change was for the better, though. It’s probably the AFOL (Adult Fan of Lego) in me that made me say it, because my favorite sets are from 90’s. But in the end, it all comes down to what you like in LEGO, doesn’t it?