There are many truck sets in the LEGO Technic line-up. In fact, one can easily say that TLG favors trucks over any other machinery. And why not, you can load them up with any function you like and there will still be space for more.

I have couple of the old Technic truck sets. I love them, but naturally, I was curious about what I might have missed over the years. With that in mind, I dived deep into internet to check up on the LEGO Technic “Big Truck Sets” with big functions, and this is what I came up with…

This may not qualify as a big set now, but believe me, it was “BIG” back in ’81. Many dreamed of this set, including me. It was obviously an early rendition of the Unimog, unofficial of course. You were able to change the front bucket with numerous other apparatus, just like the Unimog. Sure it lacks the suspension on all wheels, or an engine for that matter, but despite its age I still find the design and the functions very satisfactory.

A lot has changed in 8 years. The Pneumatic System was introduced, and even updated. It was a system that allowed us to controll the functions fluidly, with the help of pumps and pistons. Rest of the functions were still mechanical. That crane, one word, sublime… The model, still resembling the Unimog, didn’t look bad either. My only reservation with the set was, how poorly the mudguards were designed. 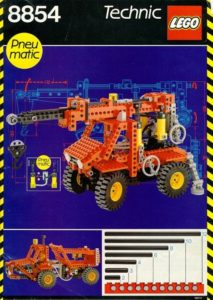 As crude as this set was, it was a technical marvel. It had everything that LEGO had to offer at the time. Even the pneumatic system was motorized, making the claw function even smoother. With new cylinder pieces, the engine was a more compact V6. It was beautiful back then, but after looking at this set so many years later, I can see the need for smoother pieces to build more attractive models. 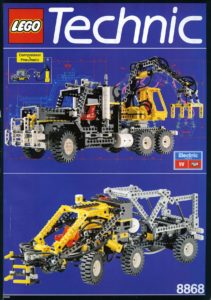 LEGO has always looked for new ways to improve their models. Here we see two very different systems used for different purposes. Using a barcode reader to control the movements (and the sounds) of the model was quite interesting. Also, the model incorporated the flex system into the model to control the claw in front of the truck. Though being a multiset, the truck was definetly the main attraction. It was very well designed with the use of new beam pieces together with the old ones, not to mention the new angle elements. It was obvious that change was inevitable.

Now, this set was really impressive, a true giant. We had seen most of the functions, the pneumatic system, the crane, the stabilizer legs, the engine, but never in a prettier package. With next generation pieces, most of the gears, knobs and hoses were hidden behind covers. It was a sight to see from every angle. B model wasn’t too shabby either. I dare say, with the trailer and the crane at the back, I find it even more interesting. 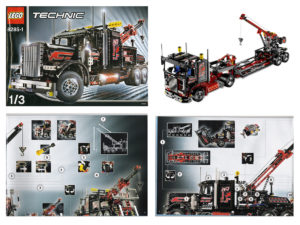 Oh man, what a fantastic looking set! Finally, the transformation was complete. With efficient use of new Technic beams, cover pieces and linear actuators, the model looked and felt nothing like the old sets anymore. The motorized crane looked tough enough to armwrestle (though I advise not to). The motor also used to extend the outriggers but not designed to move the truck. I have to be honest, I prefer moving everthing manually anyway. Then there was the B model: a good looking truck with motorized bucket crane extension. You could even build B model and be happy with it.

This was LEGO at it’s prime. This was not a toy, it was a scale model. Bumper to bumper, this set was filled with functions. I especially liked how all the levers were lined up perfectly to control the crane. Incidentally, there were no B model for this set. Instead, fitting for the Unimog, you could build an alternative apparatus, a snow plow.

I must say, I was conflicted about listing this set here. I wanted to check up on big trucks with big functions. This truck was certainly big, but look at that flimsy crane arm… Yes, the crane was motorized, as always, but it wouldn’t be able to lift anything by itself. At the end of the day (or the boom) you had to control the claw manually. And just like that, I’m all out of words about this truck. 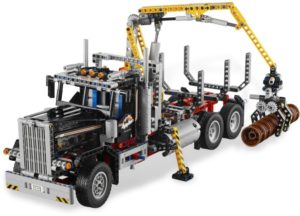 This set may not be that big, but the design and functions were so very well blended that I just couldn’t pass up on this little powerhouse. Everything you see at the back of the truck was power functioned. And the controls were well hidden under covers. I’m not really a fan of green in LEGO, but here it just fits perfectly.

Another Mercedes-Benz truck, another instant classic. It came with all the bells and whistles. Well, except maybe a remote control. It was definetly a good looking set, despite being less colorful than other truck sets. Its looks and loads of functions made this set one of the most sought after gems. 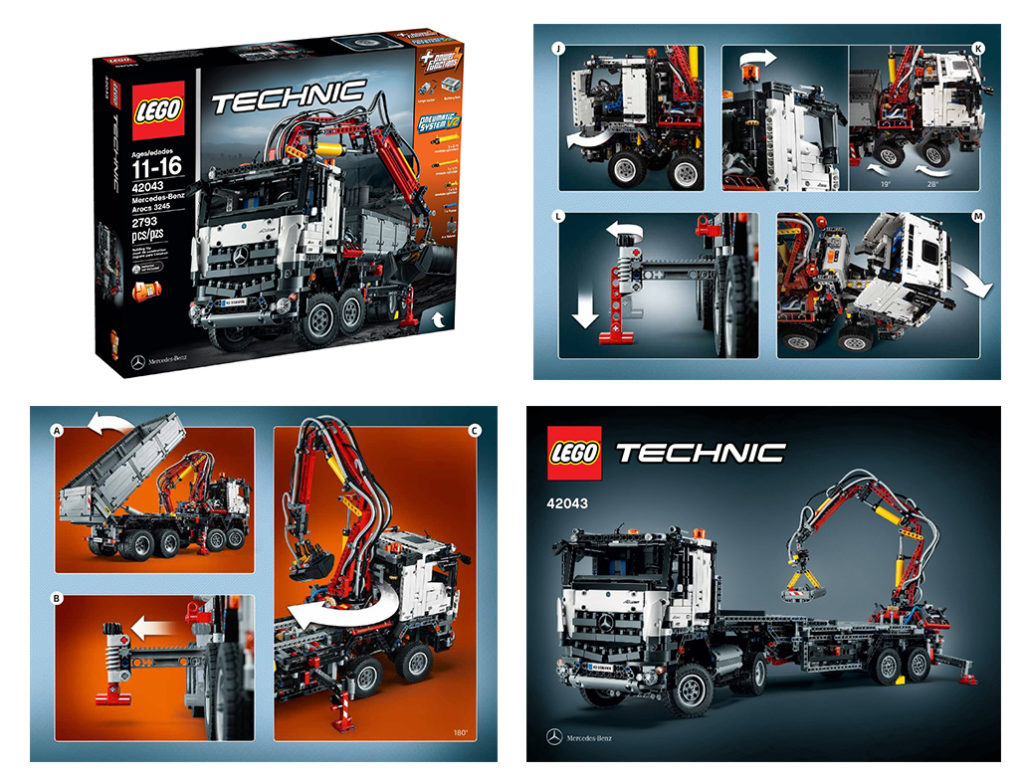 At the 40th anniversary of the Technic theme, this was the big truck set we got. I must say, I am not amused. One word came to my mind when I saw it, ugly. It was way different looking than anything came before it, that’s for sure. On the flip side, it was a true RC set, meaning you could move and steer the truck or control the crane with the flip of a lever. B model didn’t do wonders for this set either, but at least it was a bit more interesting.

After many Mack-like truck models, this time it was official. Yet, I’m afraid it was more like form over function. Truck looked really good, but even the engine was fakey. What I mean is, it had one, but without the conventional engine block. Although very different from the functions we have seen before, I didn’t find the container lowering crane that interesting. Actually, the B model was more of a Technic model than the main model. It was also a Mack but a garbage truck, which was also an accurate representation of the actual truck.

It was interesting to see new techniques and systems rise and fall along the way. But the biggest change was, of course, with the most basic technic brick: beams with studs. I realized that with the use of smooth technic beams, the sets became much denser and used many more pieces. There is one other thing I have to mention, although I don’t collect Technic sets anymore (only the ones I find most interesting), I’m still not overly fond of a new piece in every set. Nevertheless, I can’t deny that the new sets look alot better. One wonders what LEGO will come up with next…