Technic sets are better known for their moving parts and many interesting functions. While motorcycles are not as functional as larger models like trucks or cars, I’ve always thought they packed a real Technic punch in their smaller frame. I admit most of the functions are almost identical, but what these sets lack in functions, they certainly make up for it in building techniques. Now, let’s see how the LEGO Technic motorcycles have evolved over 40 years.

Look at that big tractor tires! Admittedly they were not very stylish, but every set they were in was special, just like this one. The set was Technic for sure but the side car, fuel tank, mudguards, basically every styling element was brick built by System pieces. TLG had to use the pieces that were available at the time to improve the look of the motorcycle. Maybe as a result of this, or trying to make the model look more realistic, the action of the single cylinder engine was hidden under the fuel tank. However, the set is still one of the most iconic LEGO Technic motorcycles ever produced. 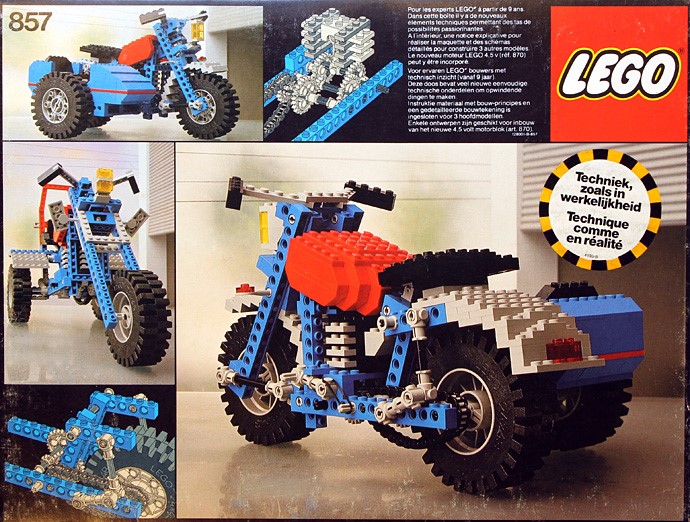 More than a decade later, a new and improved bike set arrived, at least technically. With shocks on all wheels, new wheels and engine system, the only downside of this model was the styling. The model looked more like a skeleton of a bike, rather than a bike. Maybe that was the idea, but I have to say, this set will not turn any heads in your collection. B model was also one of the most under-developed builds I have ever seen. What was that?

Wow! This is how you design a beautifully functional bike set! I missed out on this set due to my early dark age and I regret not getting it everyday after. It had a fantastic looking 4 cylinder engine behind the seat and very lively color scheme which made this set a masterpiece. I also liked the Dragster that the B model presented. It was a bit simplistic but it would pass as a basic set on its own.

Another fantastic set, and only a couple of years later. The set was pretty basic on functions, shocks and a V2 engine. But the looks were nothing but basic. I loved the building techniques in this set. There were couple of new pieces in the mix, but nothing too drastic. B model was again a fun looking dragster with an interesting engine build, but the rear wheels betray the overall design of the model.

I fell in love with the tire pattern in this set the minute I saw it. They sure don’t make them like this anymore. And then there were the hoses around the model, used as a design element along with the clear engine blocks! And what’s with the name “Mag Wheel Master”? Finally, let’s not forget about the amazing B model. This is definitely one of those sets that you have to buy three of them: one for model A, one for model B, and the last one to keep in the box forever. I’m still waiting for TLG to build a proper chopper as cool as the model B in this set. Before we move on, this set was so good, it was released again in 2002 (set 8430).

Finally, the transformation of Technic pieces was complete by the release of this set. From beams to cover pieces, with the help of new pieces, the model not only looked more modern, but also it allowed designers to fit a V4 engine into the bike. B model was another chopper, but not as striking as the previous model, in my opinion.

After so many beautiful and cool bikes, I find this model pretty basic. Apart from the vibrant green color, I didn’t find this set appealing at all. All the usual functions were there of course, but unless you’re a dirt bike fan, I would wait for the next model. And somehow, somebody thought using dirt tires on a chopper is fitting? Yeah, that’s what happened in model B.

I really like this bike. It looks mean and muscular with the covers and the flaming stickers. It was well put together, except the engine block was hidden behind the Technic covers, so it was hard to see the 3 cylinder engine in action. I also liked the B model in this set. I don’t know if it’s the colors but I really think this chopper looks good enough to build as well as the main model. If only the rear tire was wider for a cooler look.

I wasn’t really a fan of the previous dirt bike, and I’m not a fan of this bike. Yet, I must say, this bike looks better. The body has bulked up a little around the engine, and more attention was paid to the design. Still, it was only the same, bare bones and simple dirt bike. The B model was also more of the same, just a different take on the same dirt bike. Sadly the imagination was limited by the piece content.

Here is an odd set for me. With new shade of blue, the bike looks good and all but the set doesn’t really feel all that fresh. At this point, I don’t mind the engine being hidden behind the covers. On the other hand, B model, namely Retro Bike, while simpler in design, looks definitely more fun. I’ll be honest, I’d rather build the B model than the main one.

So it all came down to licensed sets even in LEGO Technic motorcycles. Don’t get me wrong, it looks good and all, but do we really need a license for a pretty generic bike set? Couple of containers don’t make this set all that special. At least we get a more interesting B model. It may not be as functional as a standard bike set, yet it’s a very nice looking sci-fi hoover bike.

After going through all the bike sets, I realised that progress didn’t necessarily make the bikes better, but from time to time we saw some great sets. I think TLG must take a chance and release a set with the chopper being the main model. One could argue that I got my wish since Creator Expert set 10269 came along in the form of a Harley Davidson Fat Boy . But did I though? I’m aware that it has Technic elements in it, and it looks really beautiful but it’s not a Technic set.

On another note, just like in Technic super cars or construction machines, it seems we have entered the licensed sets territory in LEGO Technic motorcycles, too. This trend worries me. I’m okay with occasional licensed sets with excellent content, but I like original ideas in my LEGO sets more. It just feels more creative in a way (minus you follow the building instructions either case).