I’m the latest addition to the FireStar Toys bloggers’ team, and I’m delighted to be here! You might find it a little odd that a small green LEGO minifig is talking to you, but don’t worry, you’ll get used to it 🙂

For my first post, I thought I’d tell you about something I did last week which I’d never done before: I attended a LEGO Expo: the Discovery Brick Show, all the way up in Newcastle, and coming from Wales, that’s a heck of a trip to get there.

As I’m sure you know, Wales is that tiny country with the best flag in the whole world – I mean how many real countries have a dragon on their flag? (Yes, I know Daenerys Targaryen has three of them but you missed the “real countries” bit 😉) 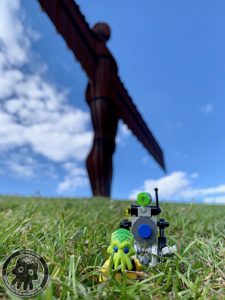 Heading to the Expo

Why did I go to the city that hosts The Angel of the North? To showcase a LEGO Ideas project I’d submitted (more on that later). But to be honest, I didn’t know what to expect, so here’s my take on the whole experience.

Discovery Brick Show isn’t the biggest show out there. In fact this was only their second expo (the first one was launched late last year), so it wasn’t overwhelming with too many things to see and not enough time to appreciate it all.

I heard there were speed build competitions and treasure hunts with prizes in other parts of the buildings, which sounded like a lot of fun. I couldn’t take part in those as I had a stand to look after. 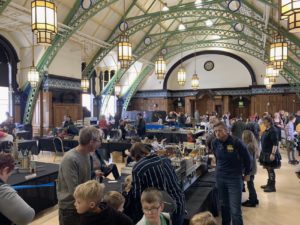 The hall I was in catered to sellers and displayers alike. The sellers had shelves upon shelves of LEGO sets and parts and pieces they were, well, selling. The main part of the floor was dedicated to us displayers. And I had a great time exploring it all.

There were a fair number of train displays. Have you noticed that there’s a lot of LEGO fans who are really into trains? Well here, we had three displays with them. There was a Classic Space section (be still by plastic heart), with what looked like every official set LEGO has produced for that long discontinued but never forgotten theme. Oh and it had two monorails going around it.

Trains and monorails. There must be a Venn diagram somewhere exploring this train/LEGO fascination. 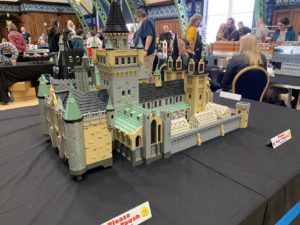 We had a huge Hogwarts Castle at the Discovery Brick Show (unattended sadly, so I couldn’t ask any questions), along with an impressively large pirate scene, with boats being attacked by a terrifying kraken, and an amazing street filled with superheroes and villains battling it out (I love how the LEGO modular buildings used were all recognisable but also heavily modified). Sci-fi nerds would’ve appreciated a great Mos Eisley cantina scene with characters from so many different IPs – there was even a Tardis!

Suffice it to say, there was a lot here to satisfy everyone. The gender bias of the displayers was in evidence though, reinforcing the distorted and damaging belief that LEGO is predominantly a male activity. Why is that, I wonder? Especially since LEGO have always gone out of their way to promote how creativity and construction are gender agnostic. 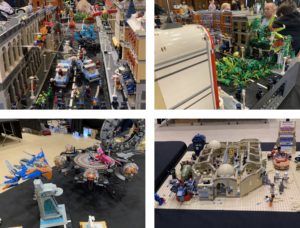 It’s an important question to ponder on because, to my mind, the best displays of the show happened to belong to two amazingly creative women. One of them, Caz Mockett, had brought most of her Micropolis, a huge modular city made in the microfig scale and bursting with imagination and originality.

So much so in fact that a few weeks before the show, Caz had heard that LEGO had invited her to display some of her work at the LEGO House in Billund, in the Masterpiece Gallery. This is a fantastic recognition of her amazing work and it was a real privilege to actually see her city in person. She was also happy for me to interview her which I’m most grateful for. Come with me as I take you on a journey to the world of the small…

Of Elves and Orcs

Another great woman designer was Sally Mansfield-O’Donnell whose goal is to “make LEGO unstraight”. She brought three models, and her pièce de résistance was a battle between orcs and elves in the most amazing outdoor setting I’d seen (I’m a huge sucker for outdoor scenes done well because I know just how hard they can be to do). She too very kindly allowed me to interview her and you can see her work in great detail in this video:

Another personal favourite was Dan Harris. He’s part of Brick to the Past and had with him two huge scenes. One recreates Corgarff Castle in Aberdeenshire, as it stood during the last Jacobite rebellion (1745-1746), and the other was inspired by the first recorded Viking raid on England, in Lindisfarne in 793 (Dan refers to it as LEGOFarne). I loved the amazing detail throughout, and especially all the brick-built animals. But don’t just take my word for it: you can see it all (and more) in my third and final interview. 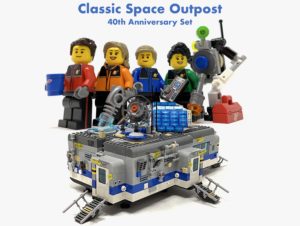 And in the middle of all of this, was my own creation. Being a mutant, I’m understandably a sci-fi kinda person so it made sense that my very first display would be sci-fi based. But rather than bringing existing futuristic sets from LEGO’s official past (amazing though that clearly can be), I brought something I’d created from scratch. The idea came to me when playing with my old sets with my little podlings. It occurred to me that those designs might’ve been cool decades ago, but LEGO had evolved since and wouldn’t it be awesome to design a space-based set but with today’s parts and construction style? 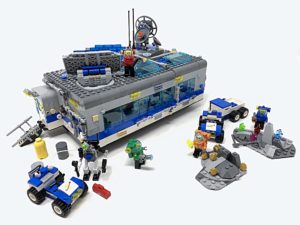 So I set off building virtually using LDD. As time went on, typical Classic Space builds like the steps to the building and the satellite dishes evolved until what was left was a modern base with nods to the past. There’s a lot of blue and grey as there should be. I wish there were more transparent yellow window pieces to truly hark back to the origins of LEGO’s sci-fi spirit, but I just couldn’t find any, so had to make do with transparent blue instead. But that’s ok: Classic Space did go through a transparent blue phase (with a lot of white).

The main concept behind my model is that it’s modular: not only is it a 5-in-1 build (you can use the pieces to create five different rooms (a command centre, galley, quarters, sick bay and workshop), I designed the airlocks to be removable so you can connect multiple sets together to create a truly unique base.

In true sci-fi fashion, it’s also got brick-built, technic controlled sliding doors, and since I was going all out on the ‘neo’ aspect, I even updated the uniforms and air tanks (using the more modern style which looks more realistic IMHO). 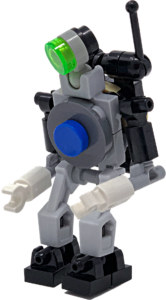 My favourite part though is my robot, All Sorts. I found it quite a challenge to create a brick-built, fully articulatable robot that was also (nearly) minifig-sized, and I really like the result.

This is what I displayed at Discovery Brick Show. I knew I’d appeal to the fans of LEGO’s space theme, but it was a real delight to see the little ones oooh and aaaah as they reached my stall and asked so many questions 🙂

You can check my project in greater detail over on its LEGO Ideas page, and while you’re there, do add your support: if enough do, LEGO could actually turn it into an actual set. Now wouldn’t that be something!

I feel this is what these expos are all about: for like-minded fans to meet up and compare notes, to showcase new ideas to amaze visitors and veterans alike, and hopefully make new friends along the way.

After all, creativity is at its best when it’s shared.

For FireStar Toys, this is Captain Mutant, signing off… until the next time 😉