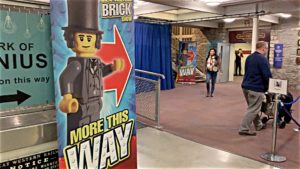 I’m still quite new to this expo malarkey. My first experience was when I displayed my LEGO Ideas project in Newcastle, at the Discovery Brick expo earlier this year, which I covered in a previous article.

It turns out that this was a very good introduction to the whole concept – a small venue (it didn’t feel small at the time!) with enough displays to satisfy you for a couple of hours at most.

A few weeks later, I attended Brick Express 2019 near Bristol. This one was smaller than the first – it fit under two large gazebos. It was all quite original, and I loved the various creations people had brought for others to enjoy. I didn’t display there, I just went to talk to the exhibitors.

After attending two expos, I thought I was ready for my third. But I so wasn’t. The Great Western Brick Show in Swindon isn’t your little regional LEGO expo – this felt more like the big leagues. The hall where most models were on display was absolutely huge, and it wasn’t even big enough since some spilled into another, thankfully smaller, room. 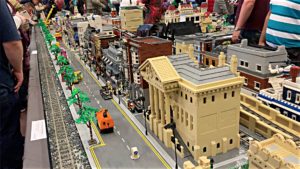 What was available at the Great Western Brick Show was pretty spectacular, and here’s a quick rundown of what I did see for those of you who didn’t have the opportunity to travel to Swindon to experience it first hand.

There were massive creations. The biggest two were collaborative efforts. One was a gigantic city street with a canal and motorised railway. There was so much detail there and so many Easter eggs, you could’ve spent the whole time exploring every nook and cranny and not get bored. 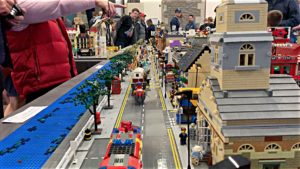 As it was designed by multiple people, the building’s architecture was quite different as you progressed down the street, but in a way, this made the whole thing feel more real as no city is ever truly designed by a single architect. There were also fun sections, like a series of floats moving down the street, a police car chase that ended pretty badly for the one who thought he could fight the law (we all know how that song ends), and I even recognised a series of buildings I’d explored in detail at the Brick Express expo. 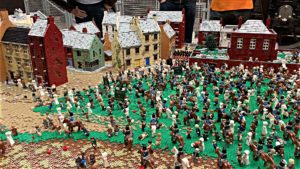 The other large creation of the Great Western Brick Show was the one Brick to the Past had on display. And this was pretty impressive. I’d met Dan, one of the co-creators, at Discovery Bricks where he was showing off a couple of smaller sections of Brick to the Past builds (I use smaller in comparison to what he had brought to Swindon). I’d also met Simon at Brick Express, but what he displayed then were more his own creations. 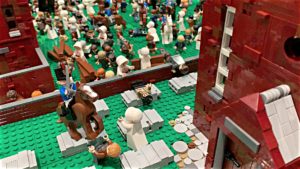 This time, Dan Harris, James Pegrum and Simon Pickard had brought to plastic in great detail the Peterloo Massacre which took place 200 years ago in Manchester. Not only was their creation absolutely massive, the amount of detail and historical research that had gone into it was pretty phenomenal. They even recreated in LEGO, events that had been witnessed and recorded at the time, like horses trampling on gravestones and people falling from windows and being impaled on spiked below – yes, some of it was quite gruesome, but hey, it was a massacre. 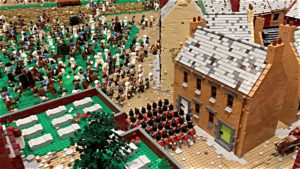 I was particularly impressed by the custom prints for the protest banners and just the shear scale of what Brick to the Past successfully attempted to portray.

But those two displays shouldn’t make you think that all there was in Swindon were huge creations. Most were on a much smaller scale and there was enough to satisfy any interest. As long as it’s built out of LEGO bricks, of course! 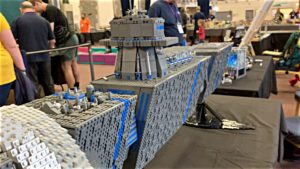 Being a sci-fi nerd, I obviously gravitated towards those displays – and it was very convenient for them to be grouped together. It was great fun to see all the originality there – that’s the thing with science-fiction: you can pretty much create anything you want. And whatever you want, is whatever we got.

Here are some which I had a good close look at. One was an impressive battleship made out of around 20,000 (!!) pieces, with a couple of automated features to expose a hangar and some cannons, and a double rotating section at the back. It reminded me a lot of the battleship from Aliens – with a sprinkle of Classic Space blue thrown in for good measure. 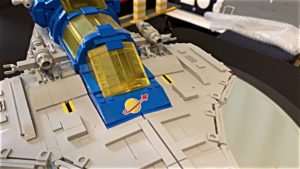 But if you’re a fan of Classic Space, you would’ve been excited to meet Peter Reid, the man many call the father of Neo Classic Space – the modernisation of LEGO’s theme from the late 70s with today’s parts and building techniques. For those who don’t know, Peter had one of his designs made into a LEGO Ideas set, the Exo Suit (now long discontinued), and what he was showing us all at this expo was his latest submission, the LL 497 Galactic Explorer, which is an updated recreation of a classic set from 1978. 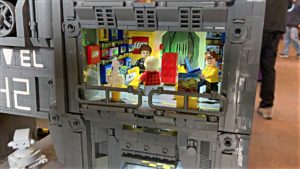 But that’s not all, there were other designers there as well with their own ideas, which is why we had the beautiful Hangar 42, complete with a LEGO store (!), an Irish pub (!!) and a recreation of Eddie Izzard’s famous ‘Darth Vader in the Death Star canteen’ sketch (!!!)

And right next to that hangar was the Theta Out-Station on Planet Duplovia. The really cool thing about this one was the use of Duplo rail tracks to create an automated rail system, along with an impressive amount of greebling (that’s LEGO-slang for surface detail that serves no structural purpose but is designed to give your creation a more realistic feel). 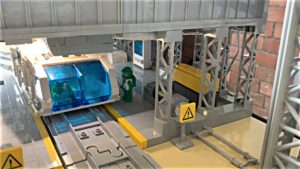 The Origins of UniKitty 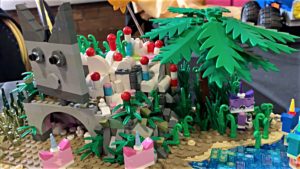 I could’ve spent all day at the Great Western Brick Show looking at all these builds, but there was more exploring to be done. And this is how I encountered Sally Mansfield-O’Donnell again. Just like Dan, I met her at Discovery Bricks in Manchester where she displayed some truly beautiful and unique creations, and she was at it again in Swindon, this time turning her attention to The LEGO Movie’s greatest character, UniKitty. She had created a series of vignette displays, making full use of all – or nearly all – UniKitties ever made. There was a metamorphosis scene, an island reminiscent of Easter Island with a possible hint at where all UniKitties come from, a place where UniKitties rest on clouds, and even a battle mech. It was great fun seeing Sally again and noticing that her creativity shows no sign of stopping. 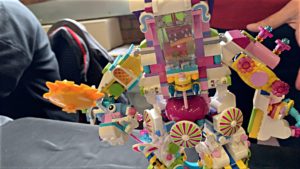 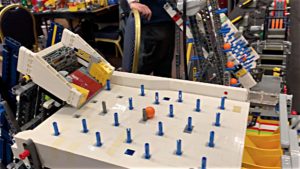 All of these creations, great and small, are in a way very traditional: you create something with bricks, maybe add some lighting, and possibly a moving train – people love trains – and show it to the world.

But there’s another type of construct which I’d heard a lot of in the past but hadn’t personally witnessed – until now. This is known as the GBCs, or Great Ball Contraptions. What are they, I hear you plead? Quite simply, a mechanised system made out of LEGO (of course) designed to move balls from one place to another. They had one at this expo, and my, was it huge. It was designed by four people, Duncan Bridges, Jonathan Hurwitt, Huw Millington and Jon Gale, each creating their own section and connecting it all on the day hoping it all works as planned. And work it did. 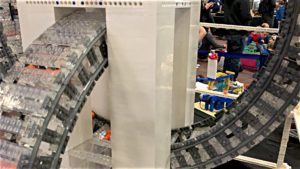 Although all sections were incredibly impressive (there was even a part where the balls are shot at speed and caught further down by a net where they continue on their journey), the biggest construct was Jon’s high-rise build. What’s even more impressive is he brought it all in suitcases on the train! You can see a time-lapse of its creation here.

By the designers’ calculation, it took about 40 minutes for a ball to travel down the entire GBC, only to start again – forever (or until they turn the power off!) 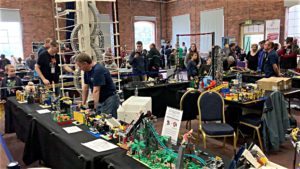 And these were but a small segment of what was on display at the Great Western Brick Show. Every corner was crammed with ingenuity and creativity. It was fantastic to see, and despite the fact I was there for hours, it turns out I still missed some creations: later in the day I spotted some photos on Instagram of displays I hadn’t even noticed were there! That’s how big the event was.

It was also incredibly popular and the place was absolutely packed – which could well account for me not seeing some parts of it.

I’ll have to be more prepared next time, and from what I’ve heard, the next Expo I’m going to visit is the country’s biggest: Brick Live in Birmingham will last for four days, from the 31st of October until the 3rd of November. Maybe I’ll see you there.