Last week, Hasan Jensen (LEGO Ideas Engagement Manager) and Samuel Johnson (LEGO Ideas Design Manager) announced the 2019 LEGO Ideas review results and the sets that will be realized in 2020: Playable LEGO Piano, 123 Sesame Street, and The Pirate Bay. In case you have never heard of the LEGO Ideas process before, here’s a quick recap. You upload your idea to the LEGO Ideas page, and if you get 10,000 supporters, it goes into review. There are countless of projects on LEGO Ideas, so obviously not every 10k project gets approved, but the chance to turn your creation into reality is truly incredible.

Like many people, I read the news on the web. After going through the projects’ pages on LEGO Ideas, I decided to share my opinions with you.

As a child, I watched Sesame Street – I’m guessing many who are around my age did. Maybe it was the interpretation, maybe it was the characters, but honestly, I have never been a fan. It always seemed a little idiotic to me. Of course it may very well be because I was a bit old to watch it, but still, I only watched it because at the time there weren’t many children’s programs to watch on TV. I have to say, while I remember the characters like Bert, Ernie, Big Bird, Oscar and Cookie Monster, that’s about all I remember about the show. Oh, sorry, there were also the songs (in Turkish, of course, and supposedly for children) that engraved into my memory. Unfortunately I still remember some of them today, and I’m not happy about it.

However, my feelings towards the show doesn’t affect the way I feel about the design of the set. Well, not too much anyway. The set is incredibly detailed, and even if you remove the characters, both the exterior and the interior seem to have great play value. The images on LEGO Ideas are not the images from the final product, obviously, and even though I don’t like the characters, I’m really curious as to how LEGO designers will turn them into minifigures. Will we have moulded heads like the Simpsons? Or regular heads with hairpieces like the new Toy Story minifigures? What I’m curious about the most is Big Bird (who, by the way, was called Little Bird in the Turkish show). Even if they leave it as it is – which is highly unlikely – it still looks great! 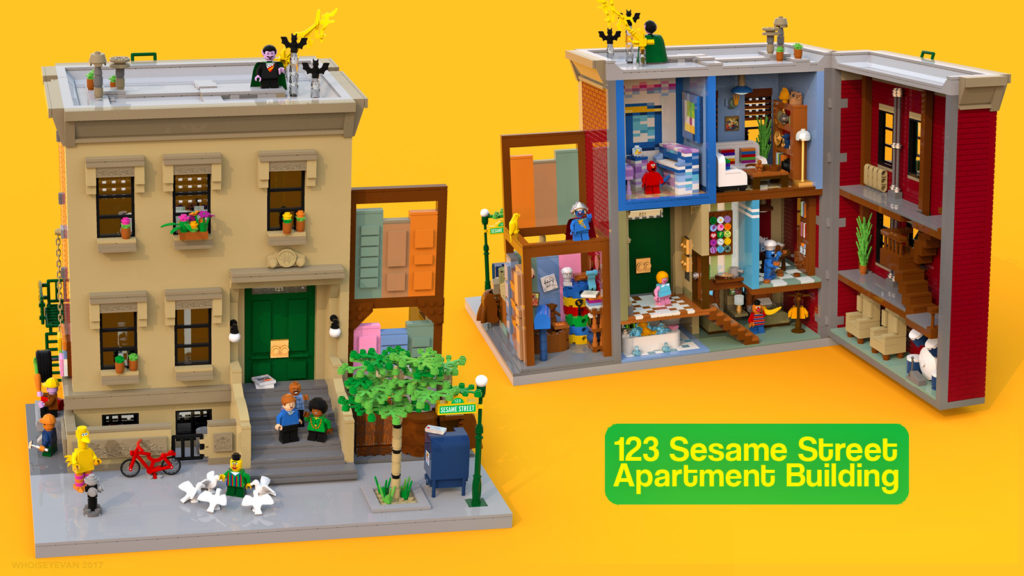 As far as I understand from the images, the building opens up like a book to reveal the inside, in which there are several rooms for the characters. I see it as a different interpretation of the Modular Buildings sets, and no matter how hard I try, I can only see it from an architect’s point of view: One reveals the plans and the other shows the sections. For a long time, I’ve been thinking about how LEGO can be used in architecture schools to improve the designs of students and help them think in a three dimensional way, but let’s leave that for another article for now.

Overall, I think 123 Sesame Street will be an interesting, not to mention very complex, build. If you were a fan of the show, you’ll enjoy the nostalgic details Ivan Guerrero scattered around the set. If not, there are a lot of interior and exterior details which are, I’m sure, will be fun to build.

May I just take a moment and say “WOW!”. Ladies and gentlemen, this guy spared no expenses! Okay, I’ll admit that LEGO Pirates was among my favorite themes as a child, but come on! Ask yourself this, which of those sets was ever this detailed? Sure, we had ships, forts and islands and everything, but it’s like Pablo Jiménez took all of those sets, combined them, and multiplied the detail level by, I don’t know, a hundred? Wow. Just wow.

Okay, I calmed down a bit. I’ll try to look at this as objectively as I can.

From the images on the LEGO Ideas page – again, not final products – I can see how much work he has put into it. I’m probably saying this for the 1000th time, but I really, REALLY appreciate people who can build something from scratch. Pablo Jiménez is no different. He has managed to give that pirate feel with the use of certain elements, like broken ship hulls, and the color scheme he chose, brown. Even when you remove the pirate minifigures and certain parts like parrots, sharks, and that skull flag, you can still sense there’s something pirate-y about the set. I mean, even though they’re all about treasure, pirates aren’t among the rich folk, right? So what’s better to build your fort than with ship parts that aren’t useful anymore? 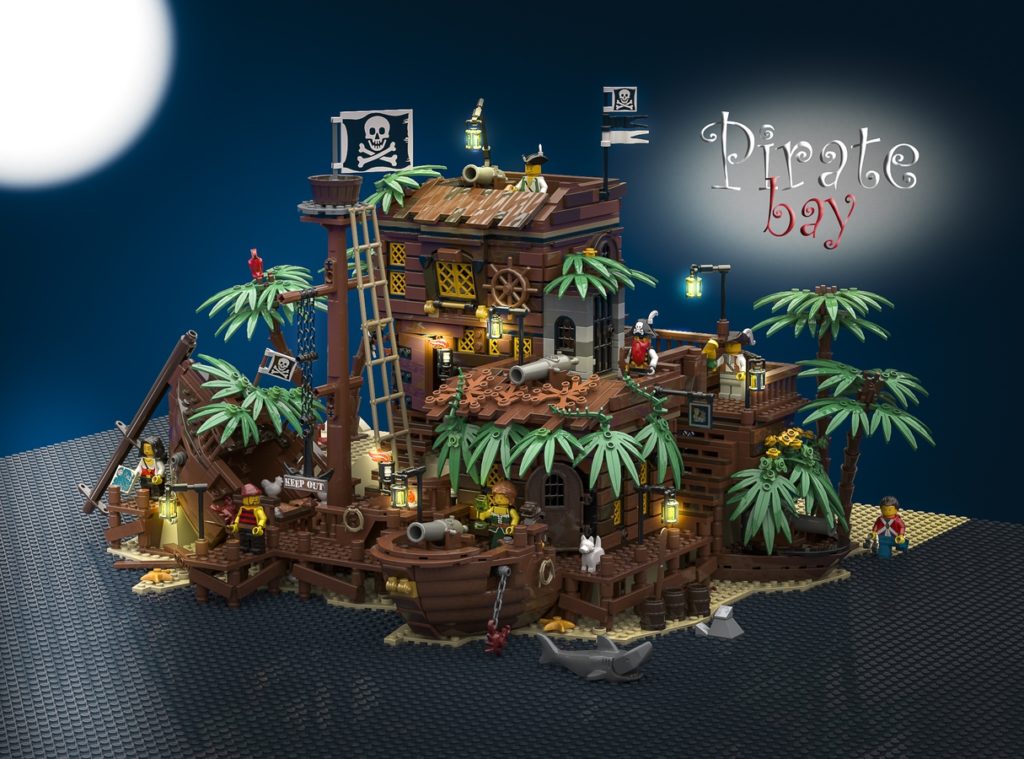 That’s the exterior. The interior, like 123 Sesame Street, is incredibly detailed as well. It’s a big model, and in order to see all the details and play with all the hidden secrets, it’s built like the Modular Buildings: It’s possible to take apart the floors to see the inside. And there’s just about anything and everything related to pirates on the inside. Sleeping chambers, captain’s quarters, kitchen, and even a prison cell – which, I understand from the little photographic story, has a secret passage to the captain’s quarters. Of course these are not the only details present in the set. You’ll need to see for yourself to get a better idea of how awesome this set is!

I can easily see adults building this set and children playing with it – and having the time of their lives!

I have to say, when I saw this set among the approved sets, I was like “Uhm… okay?”. It didn’t call out to me much. You see, I mostly collect LEGO minifigures. When I buy sets, they are mostly minifigure scaled ones that I can use in my photography. A LEGO piano… well, that just doesn’t have any place in my home. Besides, how can it be playable? 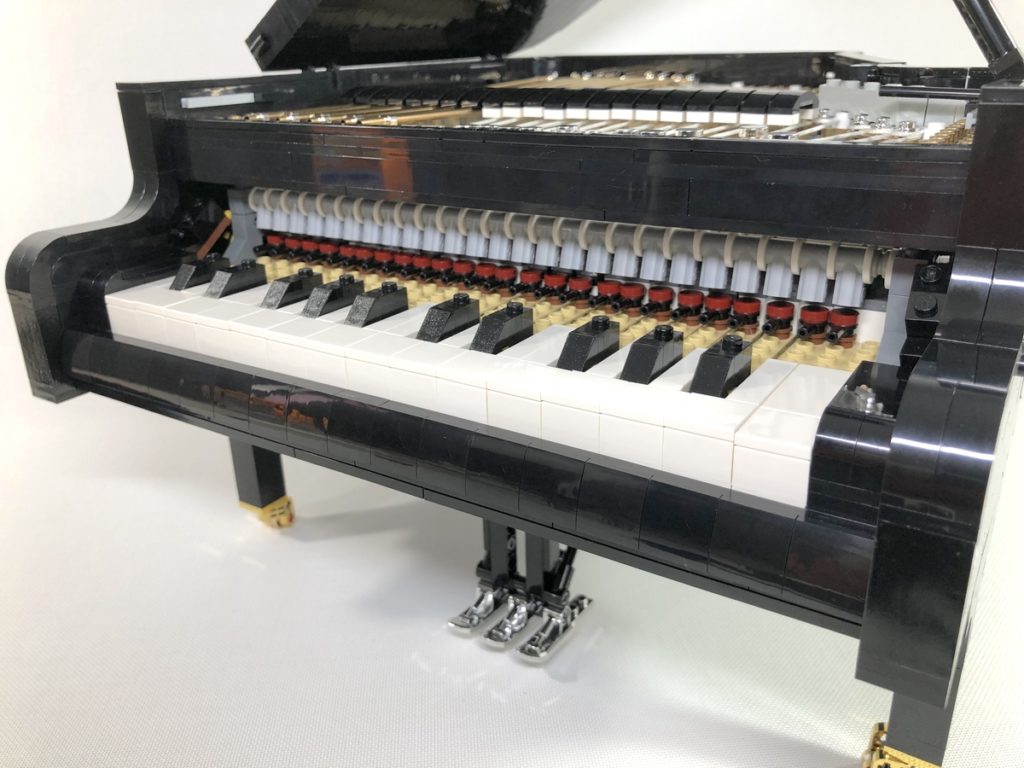 Then I went on the LEGO Ideas page of the set and watched the video. And I watched it again, and again, and again. The amount of detail Donny Chen put into that set tops both 123 Sesame Street and The Pirate Bay combined. Sure, it may not have as much play value as the others, but that’s because the Playable LEGO Piano is not a children’s toy anymore. It’s art, in its purest form. It should be a part of everyone’s life, whether you’re an adult who likes LEGO, a kid who likes music, and anyone and everyone in between.

You know what they say, a picture is worth a thousand words. In this case, a video. Please take a minute (that’s how long it is, anyway) to watch the following video and tell me if I’m wrong.

And now you know a bit more about the upcoming LEGO Ideas sets. Tell me, which one are you excited for the most? Which one is more likely to have a place in your home? Do you think the LEGO review board should have chosen differently? Let me know in the comments!

Oh, and don’t forget to check out the reviews of this year’s LEGO Ideas sets: Steamboat Willie and Tree House!

All images are taken from the LEGO Ideas webpage and belong to their respective creators.