Welcome back to Myths and Minifigs! It’s been a few weeks since our last dive into legends and LEGO, so let’s get straight back into the action… and when it comes to these characters, there is a great deal of action! Let’s have a warm welcome for these LEGO Greek Mythology characters!

I’ve loved Greek mythology from a very young age, and for many years I waited with baited breath as LEGO came closer and closer to actually producing any figures from these legends as, well, figures. There were Photoshopped fake sets of minotaurs and titans doing the rounds while I was at school, and the debut of the Vikings theme in 2005 only fed my enthusiasm and longing. We had enough fire stations and X-Wings – was it too much to ask for a Zeus or Athena?

As it turns out, not too much at all. In fact, stretch a few definitions and vague set descriptions and the Collectible Minifigure Series has given us a veritable pantheon of Greek gods! It has been a very, very slow process to find myself at a stage where I have a group of purist ancient gods, but with the quality of many of them, it’s been worth the wait.

When in the world?

As a little bit of background, ancient Greece has one of the most famous sets of myths and legends in the world, having a colossal effect on art, fiction, poetry, and even architecture and science all over the world for over 3,000 years. Blockbuster movie franchises have been built around characters like Heracles (Hercules) or Perseus (remember Clash of the Titans?), and you’d likely recognise a Medusa or Pegasus if you saw a picture of one. Even the planets in our solar system are named after the Roman versions of Greek gods (Venus/Aphrodite, Saturn/Kronos, Jupiter/Zeus, etc)! What I’m trying to say is that even if you don’t know your Priapus from your Dionysus or your Basilisk from a Drakon, you’ll have seen and heard more about Greek mythology than you think, so it’s no surprise LEGO finally took the leap into making these legendary characters too.

Poseidon, God of the Sea 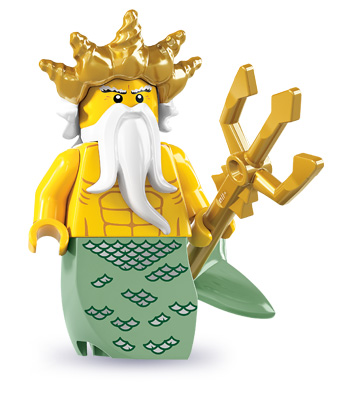 While some minifigures from the years preceding him could be loosely interpreted as being gods, the first obvious dainty deity was Poseidon, god of the seas! Or, as he was labelled in 8831 Collectible Minifigures Series 7 “Ocean King“, but the influence – from his crown of shells to his fishy, merman tail – is clear, and so he makes the beginning of our list. In ancient Greece, Poseidon was considered the god not just of the oceans, but of storms, particularly those out at sea.

He was also credited for creating horses during an argument with Athena, and was one of the driving antagonists of Homer’s Odyssey. Basically, mortal hero Odysseus did some nasty damage to a cyclopes’ single eye…not knowing the cyclopes’ dad was Poseidon, and that he would be cursed to travel the sea aimlessly for the next 10 years. It was rough being a Greek hero, and Poseidon didn’t make it any easier. You can also see the minifigure is holding a trident: according to legend, Poseidon’s golden trident contained much of his power over the seas, and acted as his symbol. His calling card, I suppose. 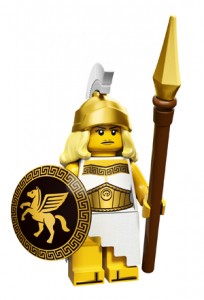 Skip forward to 2014, to 71007 Collectible Minifigures Series 12, and we’re faced with the stern, war-ready Battle Goddess, a stoic female fighter in white-and-gold robes, carrying a golden spear and shield. This, ladies and gentlefigs, is Athena, the goddess of war. Like Poseidon, she too was a key figure in the Odyssey, favouring Odysseus above many other heroes because of his use of wit and cunning rather than relying purely on strength and brute force to win his battles.

Her shield also bears the likeness of the winged horse Pegasus, a mythical beast born from the blood that trickled from the decapitated head of the gorgon Medusa (don’t worry if you don’t know what a gorgon is – I’ll get to them in my next post). She is a central figure to many myths, so her inclusion on the list is a nice one. Plus it’s always good to have more powerful women represented in the world of LEGO!

Helios, God of the Sun 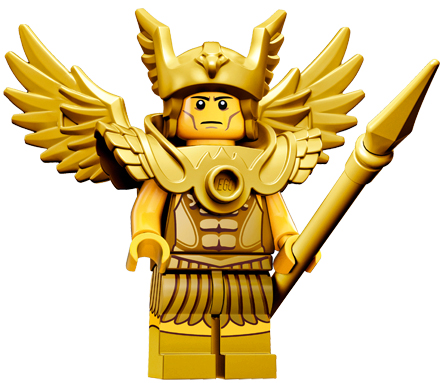 71011 Collectible Minifigures Series 15 didn’t outright bring us any new Greek god minifigures, but it gave us two minifigures with a lot of wiggle room to imagine that they might be. The first is the Flying Warrior, a winged guardian bedecked in gold armour, adorned with huge pauldrons and an elaborate, avian-themed crown. While this spear-wielding sentinel owes as much to Flash Gordon as he does to Greek myth, he can easily be interpreted as god. Specifically Helios, one of the gods of the sun. I say one of because mythologies evolve over time, and even within the myths themselves, the roles of some gods change.

Helios was actually a Titan, one of the ruling deities before Zeus and his family of gods took power, but he was allowed to stay on in the job for a bit until Zeus’ son Apollo took charge of the sun. Helios was resplendent, shining like a star and carrying the sun through the sky on a flaming chariot pulled by flying horses. I know, it sounds like a Meatloaf album cover, and if it were one, I’d definitely listen to it. Never let it be said ancient history wasn’t metal.

Series 15’s other mythological occupant is a Faun. Simply put, a faun or satyr is a mythical creature who is half-human and half-goat, and they are usually seen as party animals (hue hue hue), playing their lyres and flutes all through the night for Dionysus, the god of merriment. However, the Fauns had a god of their own, a ‘wild god’ who presided over nature’s beasts and the idea of primal abandon itself: Pan. Yes, the same Pan from Pan’s Labyrinth.

While not one of the most well-known gods, he filled an important role in ancient Greece, sitting opposite Zeus and the gods of civilisation and represented that which was untamed. The minifigure itself is a delight, as it gave us a new set of digitigrade minifigure legs that we’ve seen used since on the Gremlins from, uh, Gremlins, and soon to be used for the Demogorgon from Stranger Things.

Future of the gods?

And what about the future of godly minifigures, especially those from other cultures around the world? Are we likely to see any of them soon? In all honesty, yes, quite easily: Thor, the Norse god of thunder, is a key character in the Marvel Cinematic Universe and has appeared in 11 LEGO Marvel Super Heroes sets since 2012, and it’s not hard to imagine supporting characters from his films getting minifigures of their own. Loki and Brunnhilde the Valkyrie have already made their way into sets – perhaps future releases will provide us an Odin, a Freya or a Heimdall? LEGO also aren’t strangers to Egyptian gods and monsters, though I’ll talk more about the characters from Adventurers and Pharaoh’s Quest in an upcoming post. They’re a big deal, and they deserve a closer look than I can give them in, you know, a paragraph. 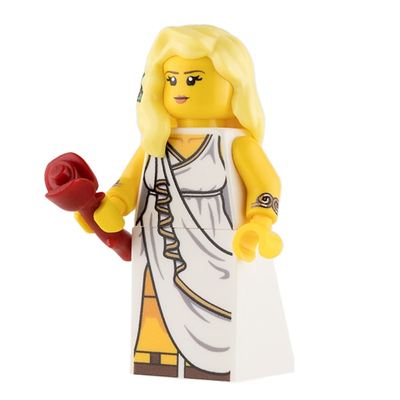 Finally, if you’re looking to get even more of a LEGO Greek mythology fix, Firestartoys actually produced their own version of the much beloved (literally) Greek goddess of beauty, Aphrodite. Wife of metalsmith-god Hephaestus but lover of war-god Ares, Aphrodite is also the mother of Eros, also called Cupid, and I’m sure you know his name – in fact, Minifigures.com have made a minifigure of him too! And of course, available from a mere few weeks ago, Disney’s own versions of Hades, lord of the dead, and Hercules, mortal hero extraordinaire (honey, I think you mean Hunk-ules!) have made their way into minifigure form!

All in all, LEGO have dived into Greek mythology and made quite a few Ancient Gods, though with some degree of ambiguity to their identities. However the influence is clear, and I hope that as the Collectible Minifigures series in particular continues, so does this tradition of delving into Greek lore. For now though, it’s time to close the coffin lid, and snuff out the lanterns. Next time, we’ll be sticking around in ancient Greece, but you might want to cover your eyes: these Ancient Monsters can be rather petrifying…