Picking a present for a special someone has always been hard for me, but nowadays it seems even harder. First, there are so many different options to choose from. Second, with the world wide web literally in our hands, everyone seems to know everything. “Ah, yes, you got me that bag? I’ve seen it on that online store”, “This book was on the Top 10 list of this bookworm page”, and so on. It gets harder each day to surprise people, and even harder to impress them. Fortunately, for me, I know this great place which creates Custom LEGO minifigures and parts.

People are strange. Even someone who has no interest in cartoons smiles when he sees himself drawn as one. I have many friends who only see LEGO bricks as children’s toys, and yet when I show them a figure and say “Hey look, this is you”, they get excited. You may have no idea what an ambigram is, but I’m sure if you see your name written in the form of one, you’ll like it. I guess it appeals to our narcissistic side, whether we know it or not.

Okay, enough with philosophy and self-exploration. Let’s take a look at our options to create our own custom LEGO Minifigures for that special someone!

I Now Pronounce You…

Let’s face it, we’re all AFOLs here. However, it doesn’t mean our better halves are like us, too. They know that these plastic figures and bricks can sometimes even come between us. So for those who know our weakness, and love us anyway, here are two little Engraved Torsos to show them how much they’re appreciated. 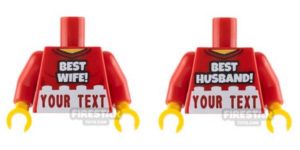 Honestly at this point I’m just waiting for a “Best Daughter” torso. He already knows it, but it wouldn’t hurt to remind my dad how awesome I am 🙂

If you’re not quite there yet, don’t worry, there’s something for you too. Whether you’re thinking about proposing, or just letting the world know who you’re with, there are a few options to choose from. Your anniversary may be around the corner, his/her birthday may be next month, or you may simply want to express your love. Here are some of the great torsos which let you do just that.

Not everything is about couples, though. Being single means there’s nobody to come between you and your dear LEGO bricks & Minifigures. And you may want to add a special touch to your Minifigures, be it your own sigfig or someone in your city. Here’s how you can make that happen.

I can already see my rebellious teenage Minifigures wearing an “I hate” shirt, or attending a high school reunion with a “Hello, my name is” torso. After all, some people change too much after graduation – or so we’re led to believe!

All of the torsos mentioned so far are cool and everything, but they’re just… not me. True, I just said I can see my Minifigures wearing them, and I can, but not my sigfig. Okay, maybe she’d wear the “I hate” shirt on her worse days, but that’s it. She’s a bit hard to please (I wonder where she gets that from).

However, mention the word “game” in a sentence, and she goes crazy! She just loves games, video games, mobile games, desktop games, old and new, good or bad… she can talk hours about them (believe me, I know). So I thought maybe there are other Minifigures like her, who are more into gaming. Wouldn’t they love a torso where they can show that?

These are just a few examples of gaming torsos, but there are many, many more!

Let’s see, we’ve talked about singles, couples, gamers… ah yes, the social mediaholics. We all have that one friend who takes selfies and posts them on social media sites – 10 times a day! Or constantly fills our feed with the food they eat. Or – and this is my personal favorite – photograph their feet and where they have been. Some of them probably never even heard of custom LEGO Minifigures, but they sure would like a new and oh-so-trendy way to show off.

Don’t get me wrong, I’m not trying to insult or make fun of anyone. In fact, some of my best friends use these torsos in their sigfigs. And you don’t have to be a social mediaholic to do that, obviously. In fact, I think it’s a great way for self-advertisement, to create your own brand. It’s also a great way to reel in non-LEGO people to the wonderful world of LEGO. Make allies, so to speak. So the next time you meet, your friend may say “Omg omg omg didyouseewhattheydidwithlegos?”, and suddenly you won’t be the only one in the room talking about ‘toys’.

Come to the Geek Side

For a minute let’s suppose that you’re reading this post and thinking “Yaay, custom torsos. Not impressed. What happened to all the awesome LEGO super heroes? Why aren’t you mentioning them?” As a matter of fact, I was just about to. Here are some options your Minifigures can choose from when they’re going to their favorite comic book store.

And when they’re going to their favorite convention dressed up as the newest super hero in town.

And if the ladies want to show how much weight they have lost while carrying all those comic books and sci-fi DVDs, here’s something extra special for them.

What about our closest friends who bear with our obsession? Surely they deserve some extra appreciation. After all, they’re the ones who hold themselves back from looking at their watch every time we start talking about the upcoming LEGO sets and how awesome custom LEGO Minifigures are!

Now you can show them how you feel about them, mess around a bit, make sure they know they’re in for many more hours of your LEGO talks, and even wear the same outfit to show the world you’re on the same team!

Okay, I’m starting to feel like a saleswoman at a clothes store, so I’ll stop talking about Custom torsos and give you a few ideas about accessorizing your Minifigures. But before that, I just have to share my favorite torso of all. 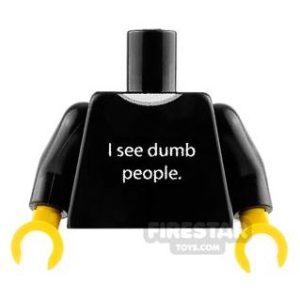 Yes, I do. More often than I’d like to admit.

There are literally thousands of parts to choose from on firestartoys.com, so here are some I picked for various occasions. After all, it’s the small details that give life to everything.

For those Minifigures who are into eating & drinking a little more than others: 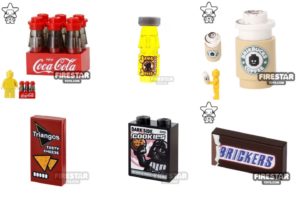 Those who can’t stop gaming: 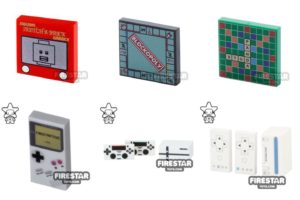 The ones who want to show their love to comics & movies: 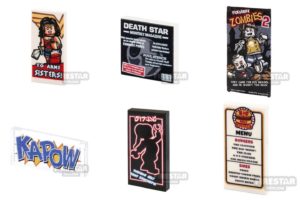 And finally, those who want to use Custom accessories every day, for themselves, in their house or in their LEGO City: 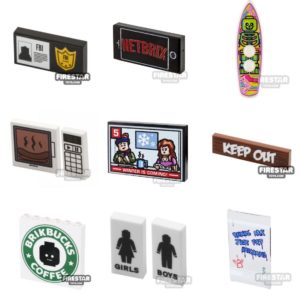 As you can see, there are many ways to create custom LEGO Minifigures. Being interchangeable is, after all, their main feature. Add an accessory to a few, and before you know it, both your Minifigures and your city will be more alive than ever!

Like I mentioned before, there are way too many parts to choose from. So for your sake, I’ll include a list of all the parts mentioned here. If there’s something you like, you can access it easily just by clicking (or tapping, whichever’s your poison 🙂 ).

Also, do let us know if there’s a specific design you’d like to see printed. You never know who might be reading!

Links to parts mentioned in the order they appear: