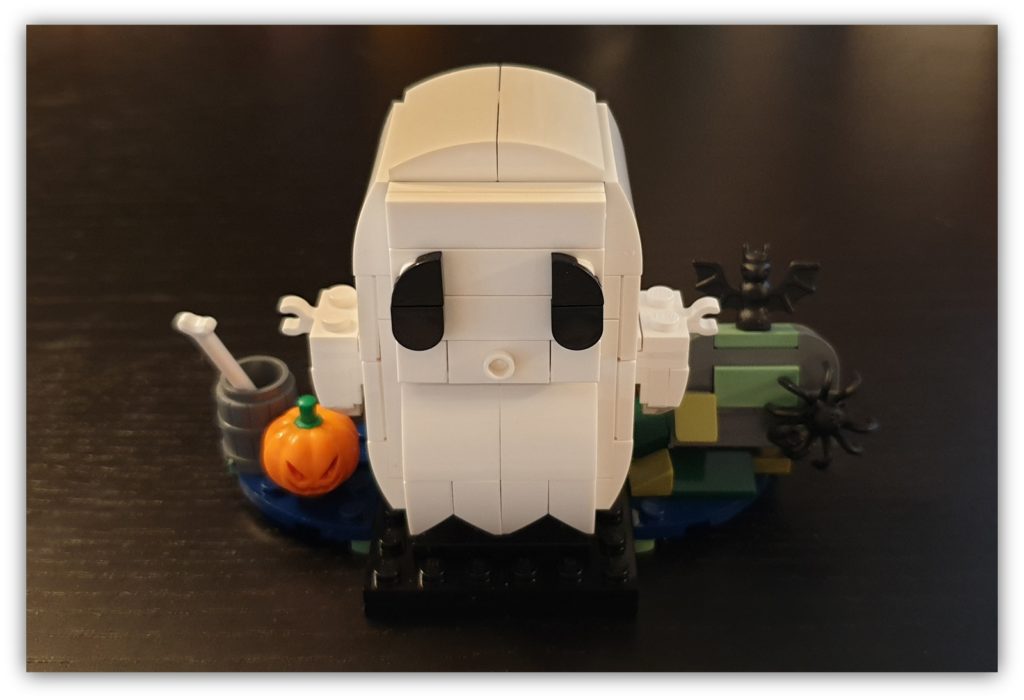 When you open that cardboard box of plastic possibilities, how do you build? Do you rip open the bags, carefully snip open the top, follow each instruction step by step? Or do you check, double check? And do you build your LEGO alone or with others;  do you have set roles and responsibilities?

I asked myself this question last weekend. The week before I was at London Comic Con;  as my wife and I walked around the stalls my wife was telling me about the MythBusters Adam Savage and his vlog; how he separates and sorts every component of a build before beginning. And it was from this train of thought that I decided I would see how complex that was.

As it was Halloween (and not wanting to overload my desk with a big set) I bought the LEGO Halloween Ghost (set number 40351). This is how I got on. 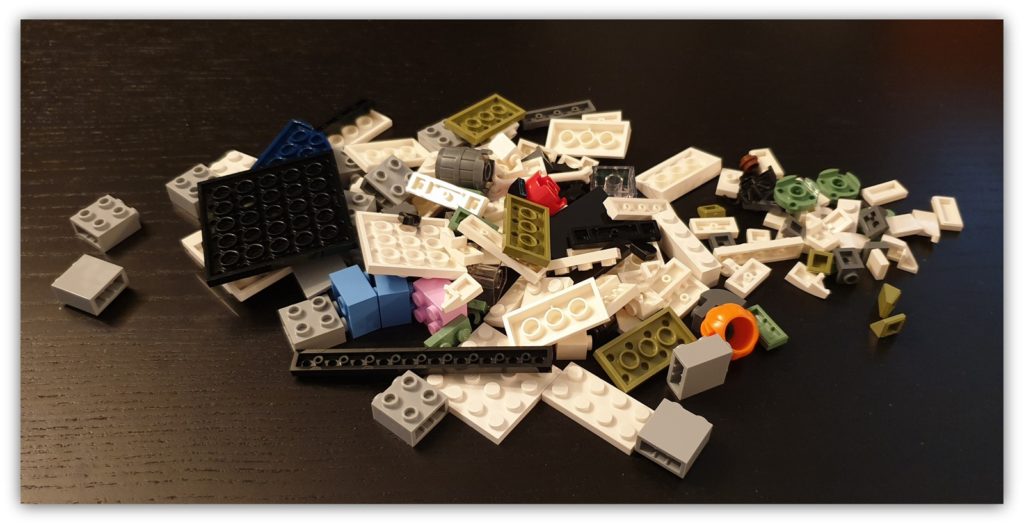 First step was carefully cutting open the box.  Rather than just ripping into it, I used a sharp knife to carefully open the seal and break the glue points. Then, I emptied the contents onto my desk.  The next step was to go through the inventory check. Should I check by each of the three bags, or just lay the whole thing out, not unlike the check list at the back of the instruction book?

Well… quite a few minutes later… 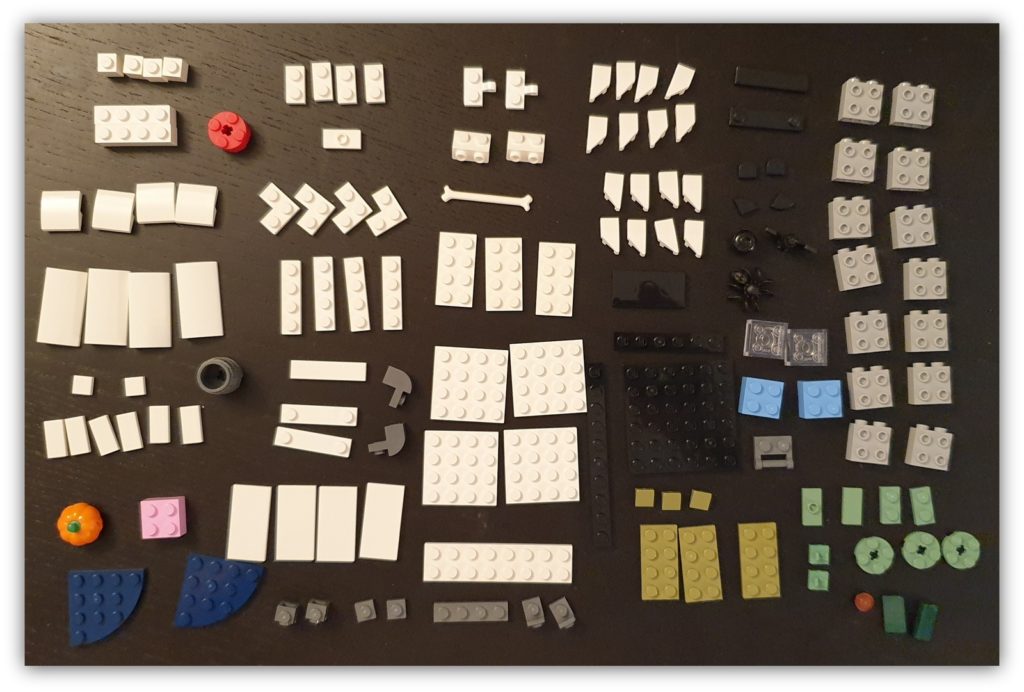 I’ve not been quite so analytical before, so the result was both rewarding and disappointing in equal measure; rewarding because it was really pleasing to know that I had all the bits (and I knew what was extra) but disappointing because I had managed to fill my entire build space by laying out the parts. Additionally, I also remembered that working on a black surface isn’t the cleverest of ideas; which I realised when I was looking for the small back part that was sitting right in front of me, not covered or obscured by anything! 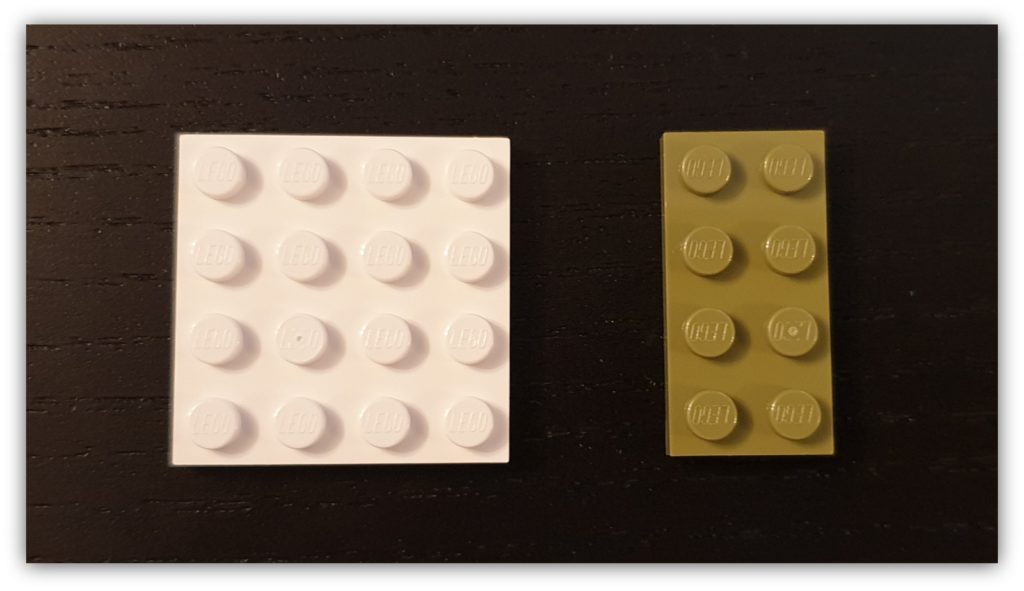 Depending on the size of the set you have got, each instruction set may also indicate what parts are needed for each step. Having carefully moved all the pieces to the edge of the build area (and making sure that all the black pieces were reflecting some light so I could still see them), I started by laying out the parts before construction.

The first step was to put the 2×4 onto the 4×4 running down the centre, which wasn’t difficult or complicated. I mention this because on another set I have the first instruction was to get a 6 x 8 plate and put in the build area. Whilst I appreciate that these sets are to enable people of all ages to enjoy building sets, I can’t help but feel that this is over simplifying any build experience; and because I had broken this experience into such explicit levels it just made the step even more pointless.

The excitement is building! 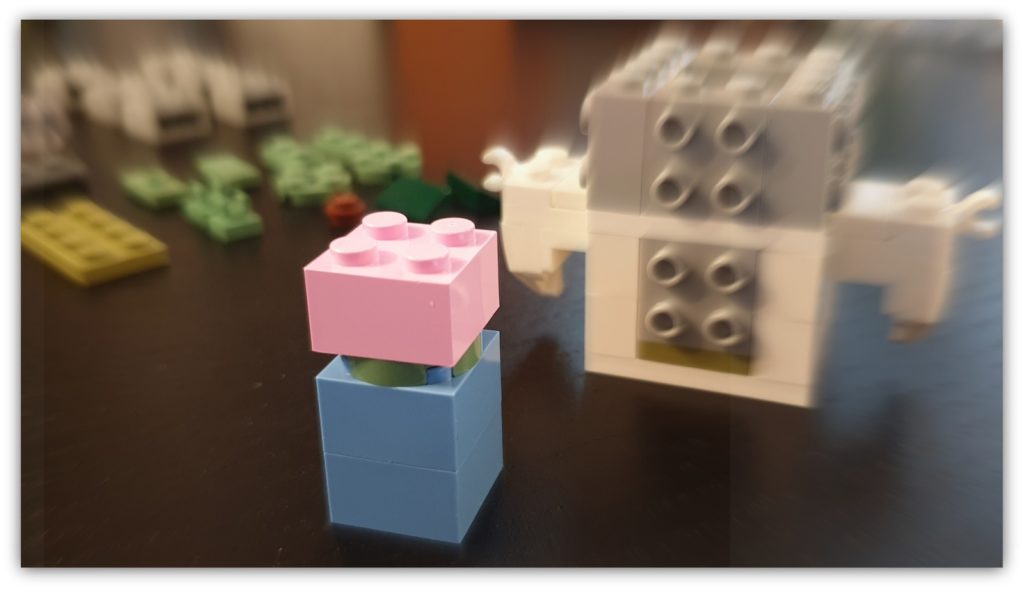 The build continued.  When I’m building Brickheadz there is one part that always makes me smile; the bit when you slot the brains into the figure. Not sure what I mean? Well, have a look at the image above. If you consider that this section slots into the middle; that the top 2×2 brick is pink and that it’s separated from the others by a 2×2 circular plate, then with a little imagination you can think of this as brains! And if it isn’t, well LEGO are missing a trick!

The other change I noticed on this build was the legs. Usually, there are two 2×1 bricks making up the legs of the character; but for the ghost they have used to 2×2 clear bricks under the SNOT (Studs Not On Top) sideways-built skirt, giving the impression that the figure is floating! 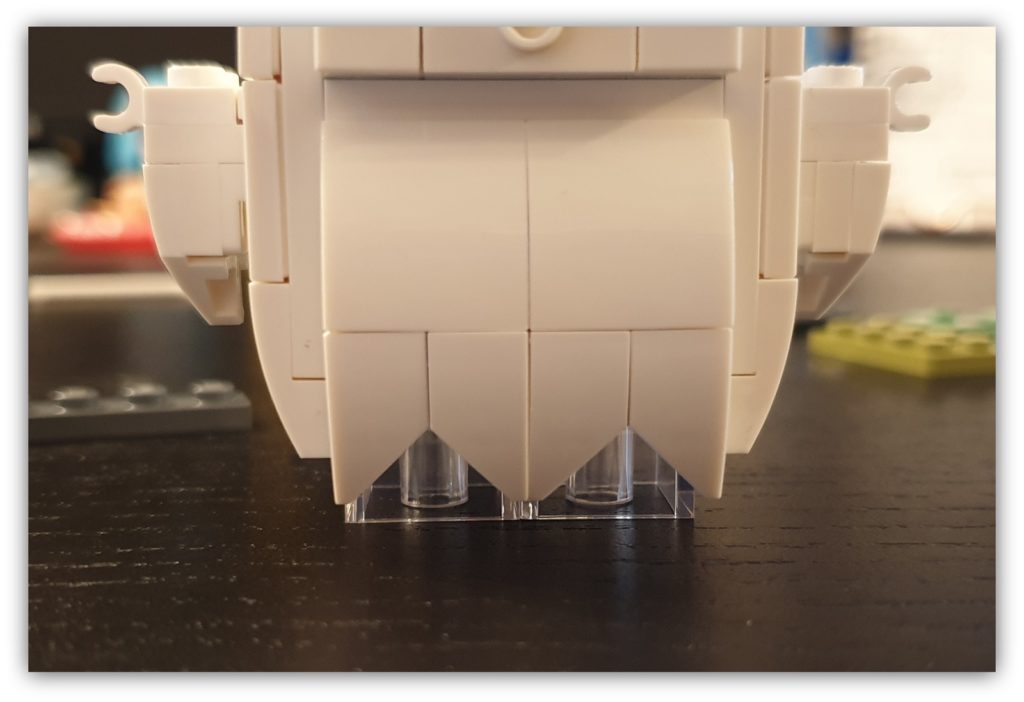 One thing I was pleased to see was that this set did not have any stickers in it! I’m sure that someone somewhere must love these flat sheets when they spill out of the box; I’m not one of them. When I bought the Overwatch set Junkrat and Roadhog (set 75977) I was very pleased that some pieces (such as the front of the sidecar) was pre-printed, but the big sign came as a sticker. Or rather, two stickers that split from one overall image.

Applying stickers is a stressful situation. I use tweezers to remove the sticker from the sheet and typically take three or four attempts to apply the sticker; desperately trying to ensure that the sticker is applied correctly aligned and without bubbles. I am curious to know how others find this stage in the build process; whilst I accept that printing a sticker is cheaper than printing the brick, I do feel that this stage will disadvantage some builders who don’t possess the dexterity (or patience) to apply the sticker. And as can be seen from the image above, even when applied with patience, the end result is disappointing.

Right at the start I asked the question “how do you build your LEGO”. Usually I won’t bother laying all the parts out, but I will separate the parts for each step. But I usually build alone and typically build quite quickly. I wondered how multiple people could build a LEGO set; because of the way the instructions are laid out they do favour a single-person build.

But I have discovered that it is possible to break up the roles to enable two or even three to build the set. One role will pick all the pieces out for each step, the second person will then instruct the third person who does the building. I’ve built some larger sets with someone else; we shared the instructions to find the pieces and build the step; there is certainly some achievement in thinking “we built that” especially if it’s something that will be displayed somewhere in the house.

The result was a very neat Halloween ghost.  I did like the build though. I like the way that the ghost looks; I’m not sure about the dustbin and the bone, but the partially falling gravestone was a neat touch.

However, for the additional time and effort I had put in making sure that I had all the parts first, then laying out all the parts for each stage; before building and checking that I had correctly built the step (oh, and making sure that everything was properly aligned too)  I don’t think that effort really showed in the final result.  But it was an exercise in careful building; and if those extra steps are something that bring you pleasure then I tip my hat to you; you clearly have more patience than I have, but I will still sort the parts before I build each step!