Death Star, mobile space station and galactic superweapon from Star Wars saga, has appeared two times as a LEGO set. The first time was in 2008, in the set 10188 and eight years later in the set 75159. Many people think that set from 2016 is just rerelease of the set from 2008, but that isn’t true. One of the biggest differences is the minifigures selection. The first LEGO Death Star comes with 24 minifigures, while the second one comes with 27. In this guide, I will show you all the figures from both sets. Pictures from the left side will be from set 10188 (2008) and the right side from the set 75159 (2016). 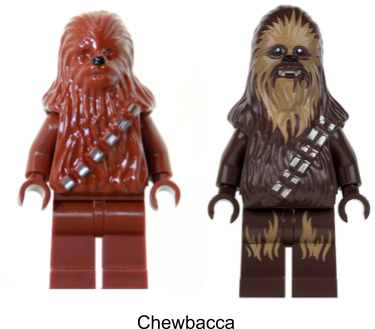 The first figure is our favourite Wookie – Chewbacca. As you can see, the newer version is much better than the old one in every aspect. Legs got printed, the headpiece looks more realistic, and what is more, teeth and pupils are here too!  Nice improvement! 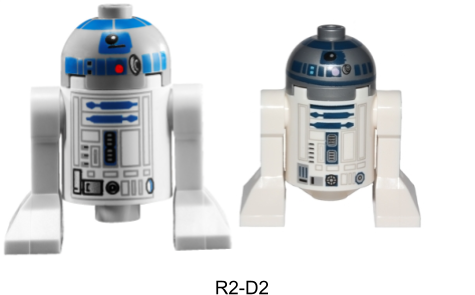 Beep – beep! Smartest Star Wars droid here! Don’t think it didn’t get some new pieces! Believe it or not, only legs are the same! It is easy to spot that the headpiece isn’t light bluish grey but flat silver. The torso piece is different too. If you don’t believe me, look closer at the picture. 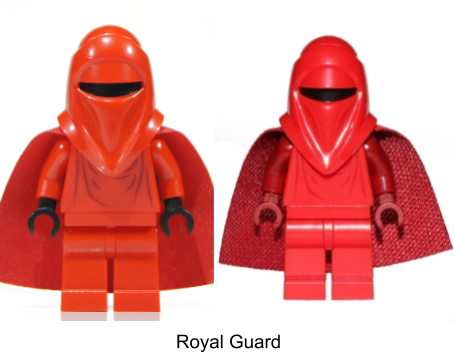 Royal Guards are included in both Death Stars too. As you can see, they only differ by colour of hands and cape (the right one has spongy stretchable fabric cape). I think that it was necessary to change hands’ colour to red because it’s more accurate to movies. It’s a fun fact that in both sets you will get two Royal Guard figures. 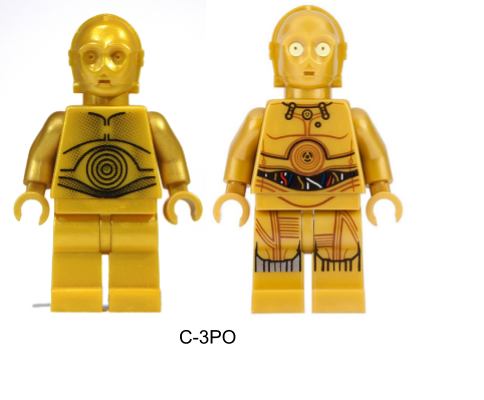 C-3PO, a droid made by Anakin Skywalker, got updated in all of his (three) parts. Starting from the head, eyes are now more accurate to movies, torso now contains a hole pattern allowing you to see coloured wires under this protocol droid. Legs are printed now, and what is more, a nice detail where one leg contains silver and other golden wires is present too! 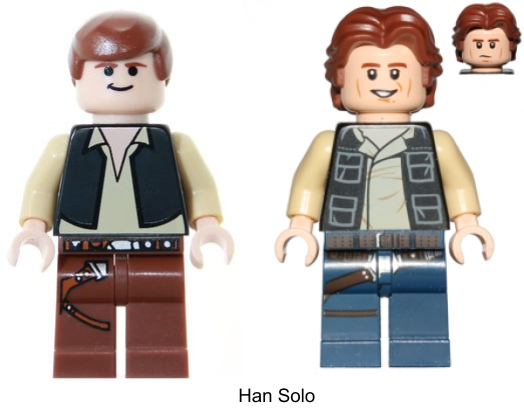 We all know that Han shot first, but that doesn’t mean he doesn’t deserve a better figure! Although many LEGO fans love the older version of Han because of nostalgia, I must admit that I prefer the newer one. He got wavy hair instead of classic LEGO male hair, and his iconic jacket is much better shown on his torso part. Legs with belt got a colour update – they are now dark blue, and the belt got a few more details too. 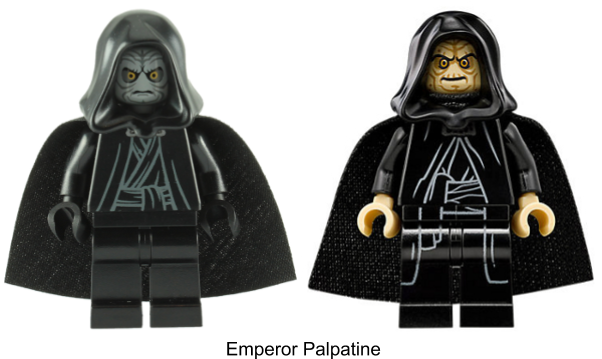 Death Star without Emperor Palpatine – no way! The powerful Sith is included in both sets. However, you can see that the new version is significantly improved. For example, the head and hands are now in light nougat colour, which is much better than gray face and black gloves on the older one. Cape is now spongy (I really love this new material for capes) and his robe pattern is now not only on his torso but on the legs too! Very nice! 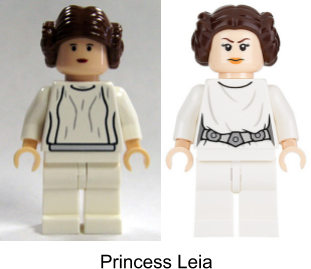 Princess Leia, one of main characters, got updated too, which is expected. Her recognisable hair is made by the different mold, and I think that this one is more accurate to the character’s hair. Head color remains the same, but we now have detailed eyes and eyebrows. It is interesting to note here that in the LEGO Death Star version from 2008, light nougat colour for minifigure faces and hands was developed, but only used on certain characters (we saw that Darth Sidious had gray head for example). It is worth mentioning that the torso now has an updated belt and more detailed loose dress pattern. Legs are plain white in both figures, but this is understandable because she wears a white dress. 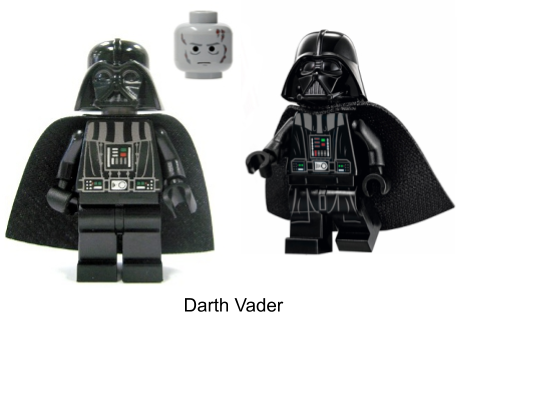 Darth Vader got a huge update – the whole minifigure was changed. The first thing you see when comparing two versions of Vaders is the helmet. Older, one pieced helmet is replaced by the new which contains two parts – bottom part (collar) and helmet. It’s more detailed and looks better, but I still prefer the older one because of the nostalgic touch. As I mentioned before, almost all capes are now made from spongy material, and that’s the case here too. His torso looks better now, and legs are printed – you can see the robe pattern on them. 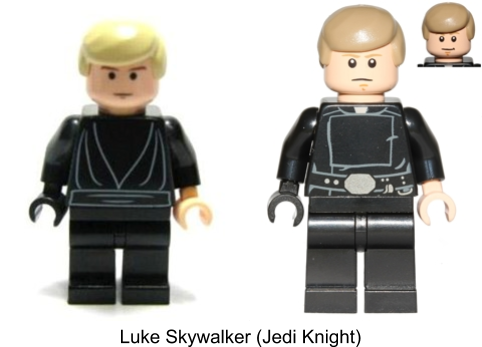 Unfortunately, Luke Skywalker didn’t get new hair – he still has the old classic one. On the other hand, his torso is updated – collar and belt are added. His new face has printing on both sides. Legs are the same – plain black. 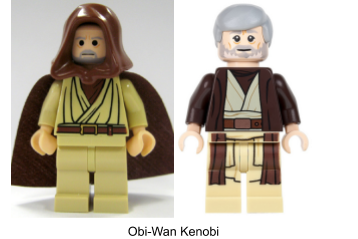 Obi-Wan Kenobi looks like an (almost) completely different figure! He lost his hood and cape, but they are still here as a pattern. His robe pattern is impressive and part of it is even on legs! LEGO did great work here, even the classic hair works nicely here in combination with the detailed beard! 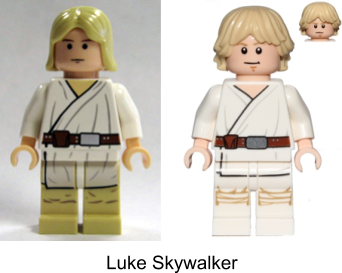 When the first LEGO Death Star was released, the one thing I couldn’t understand is why this part was chosen to be Luke’s hair. I wasn’t lucky to find the answer, but LEGO fixed that in 2016 version of the figure. I am wondering why Luke Skywalker Jedi Knight doesn’t have similar hair. His torso and legs contain more clear white, which looks very well in contrast to the belt. 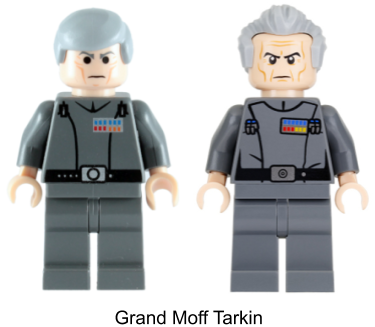 Speaking about hairs, Grand Moff Tarkin was lucky to get new hair too! Updates are present on the head and the torso too! I must admit that I am a big fan of blue, red and yellow details on his uniform! 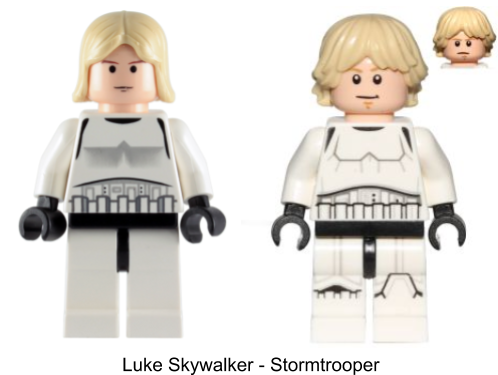 I already said what I thought about this hair change, but here is a good place to comment on Stormtrooper armour! It looks really better now, especially torso looks very accurate to the movies. Legs are printed too, which is always a very welcome addition. 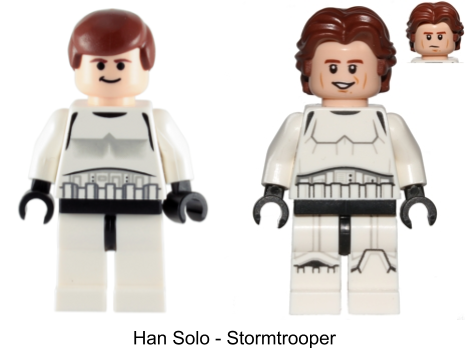 Almost the same comment as for Luke Skywalker can be applied here. Both Luke and Han have the same Stormtrooper outfits in both LEGO Death Star sets. The simple, but a very effective way how to change armour of a minifigure! 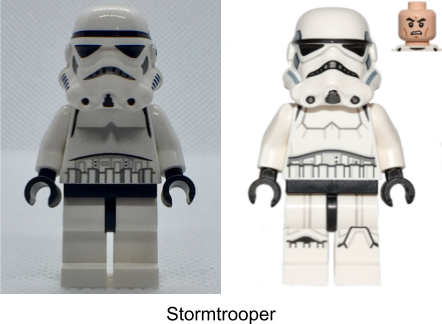 After the Stormtrooper outfits, we have Stormtroopers themself! You can easily see how big improvements are made here, Helmet got the more detailed print, and torso lost strange shadow pattern. It’s worth to mention again, I am really happy that the legs are printed now! Stormtroopers are very often in the Star Wars franchise, and they definitely deserved a better look. 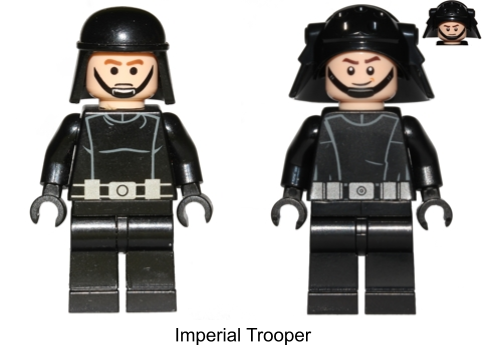 When I saw the Imperial Trooper figure from the first LEGO Death Star for the first time, I got the feeling that his helmet wasn’t done properly. Luckily, that is fixed with a new mould helmet, and this time, it looks perfect in my opinion. Torso got minor updates but looks even better now. Legs are, unfortunately, without print. 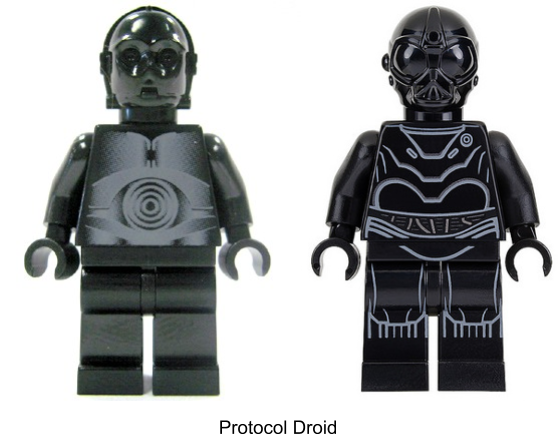 Protocol Droid is definitely one of the figures with the biggest changes. It is changed completely and even the older figure (called Protocol Droid) don’t have the same name as the new one (Death Star Droid). The helmet of the right one is my favourite part here, but the pattern on the torso is also very nice. 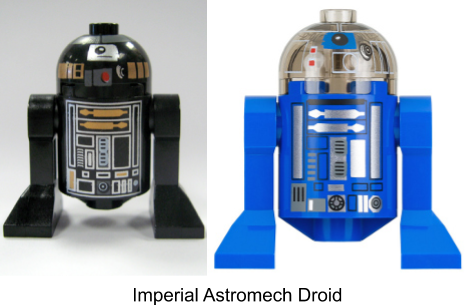 Astromech Droids are well known to every LEGO Star Wars fan, and they are included to both Death Star sets too. Parts are the same, just the pattern is different. I think this is a big plus because we got two more astromechs. They both look really good. 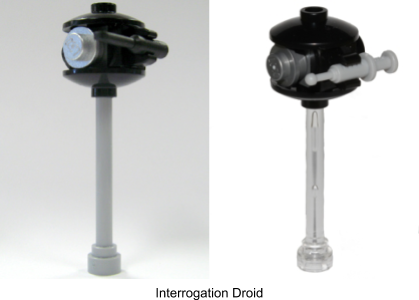 Interrogation Droid was on screen for only a few seconds, but it was enough to ensure a figure status in both LEGO Death Star sets. Love inclusion of trans clear antenna and Syringe in the new version of this uncommon figure. 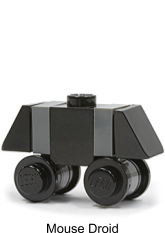 Mouse Droid has the privilege to be the only figure which is the same in both sets! It is very cute, but it doesn’t have any important role in movies. I think it is included only to increase the number of figures. I can’t complain because of that – every additional figure is very welcome!

And that’s it! We compared all the figures in both sets! But, wait! We aren’t over yet because there are some figures which are included in only one of these sets, so they don’t have their oldest/newer versions. 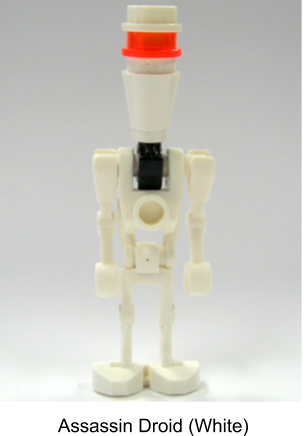 In the older LEGO Death Star, there is only one figure in that category. It’s Assassin Droid in white colour. Many of you know for IG-88 droids, but this one only represents a droid, not a certain one. 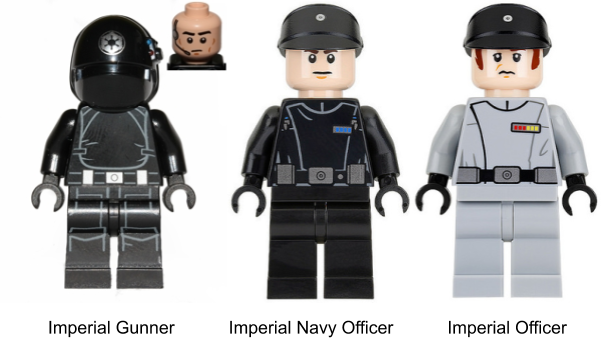 In set 75159, there are even four figures which aren’t included in 10188. Two Imperial Gunners and two Imperial Officers. I think that Officers are very important on Death Star as well as Gunners. It was a big mistake not to include them in the older set!

Overall, you will get a lot of figures in both sets. Obviously, in the new one, there are a lot of improvements, and that’s why I recommend it. On the other side, older figures certainly have some nostalgic touch. You need to choose which type of collector you are!

What do you think about those figures? Do you have some favourites? Why? Tell me in the comments section!

Thank you for reading and wish you a bricktastic day!

All the images are from Brickset