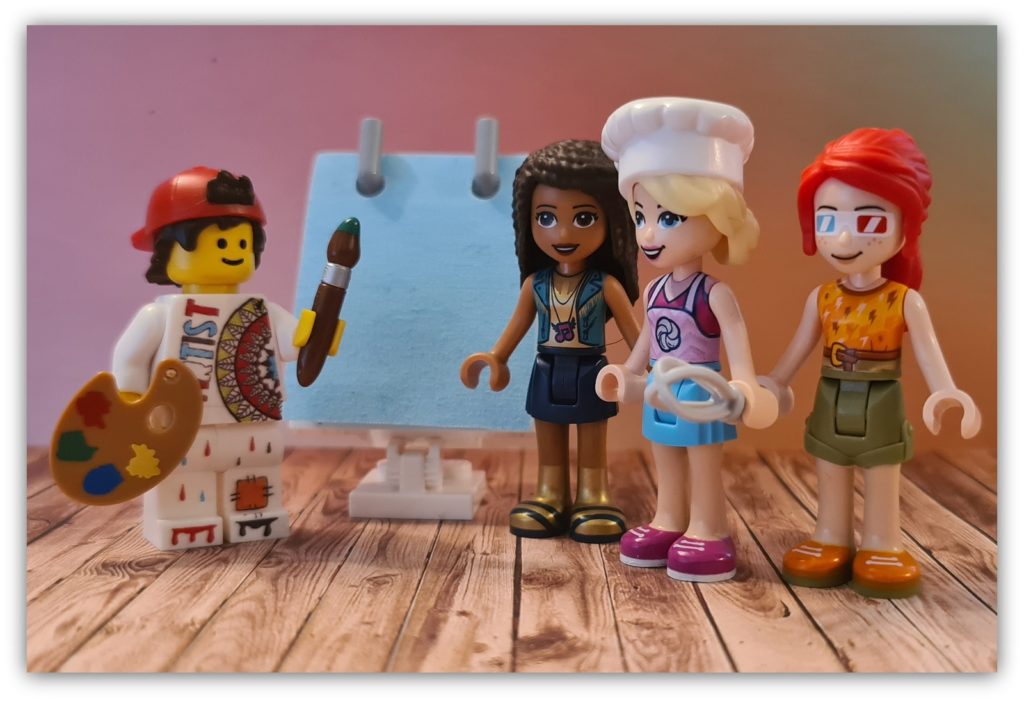 After the quick tutorials on “How to Draw Batman” and “How to Draw Ninjago” I decided to turn my attention to a LEGO theme that doesn’t get the attention that it probably deserves; that of the Friends theme. In this tutorial we will look at how you can draw a couple of LEGO Friends characters.

LEGO Friends was introduced in 2012 and was designed to appeal to girls.  It introduced and featured five girls – Olivia, Mia, Andrea, Emma and Stephanie – and their home in Heartlake city. The theme introduced a much wider colour palette than had been provided before. Additionally, and more importantly for this article, the characters themselves were “mini-doll” figures rather than the traditional LEGO figure.

Whilst I had several characters to choose from, I settled on two; Andrea from Emma’s Art Studio (set 41365) and Wonder Woman from Wonder Woman Dorm Room (set 41235).  Like LEGO figures, much of the difference in the pieces is down to printing; but overall the shape of the figures are very different from that of a standard LEGO figure. I realised the tips and techniques align more with real-life drawing than the cartoon or technical-based drawing that we applied with Batman and Ninjago.

When I was preparing for this article, I sifted through my LEGO figures box and found that in the piles of figures I had, some of the wig pieces had become separated from the figures. This was either because they had been knocked off by other figures or more realistically because I had swapped the hair piece for something else.  So, I went to the web to see if I could piece them back together.

What I discovered was that in 2018 LEGO decided to undertake a revision, not just to the Friends characters but to the wider Heartlake City.  So, in summary and for information:

Portrayal in Comics and other media 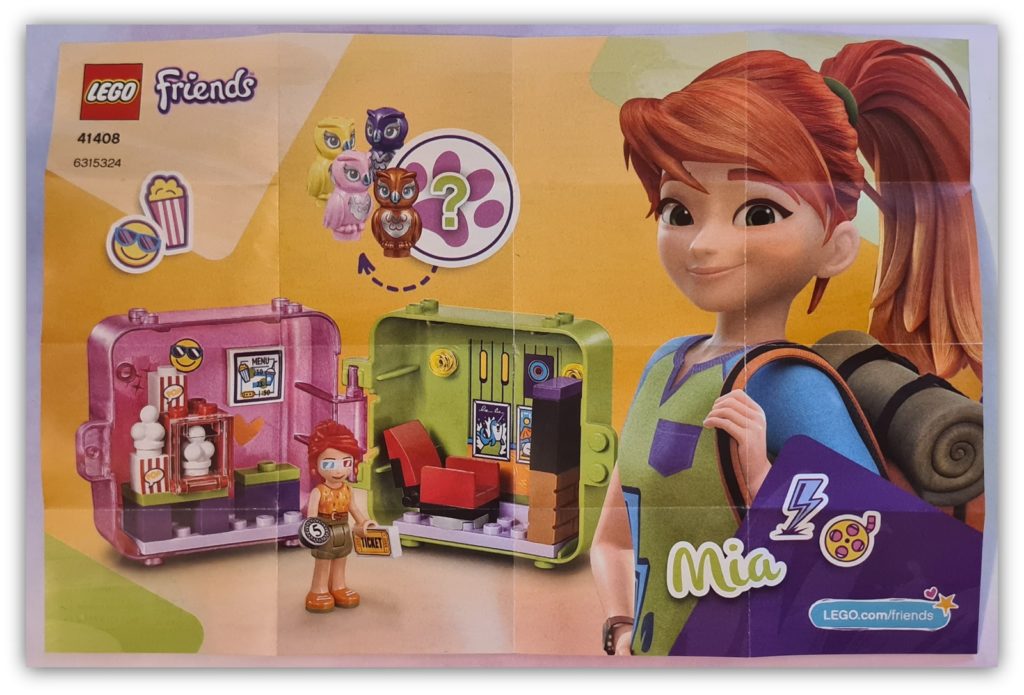 One of the immediate differences I also spotted was how the figures are depicted in other media, such as the instruction booklets.  For many of the LEGO comics, the figures are drawn with the movements that they are (mostly) capable of.  By that, I mean fixed legs hinging at the hip, or arm moving in a front/back direction;  if the arm is showed turned out it would look the same as if you had pulled the arm from the socket.  Some modern images are starting to show some additional flexibility, but the overall look and feel is a clear LEGO figure.

But the Friends characters don’t continue that trait. As you can see from the image above, taken from Mia’s Shopping Play Cube (set 41408) the character has more mobility than the figure, with far more humanised features such as a hand with fingers rather than the standard claw.

I’m going to look at drawing the LEGO figures rather than this version. I felt that if I was to go down that route, I would be providing a tutorial on life drawing rather than LEGO character drawing. And secondly, my ability to draw hands isn’t great! 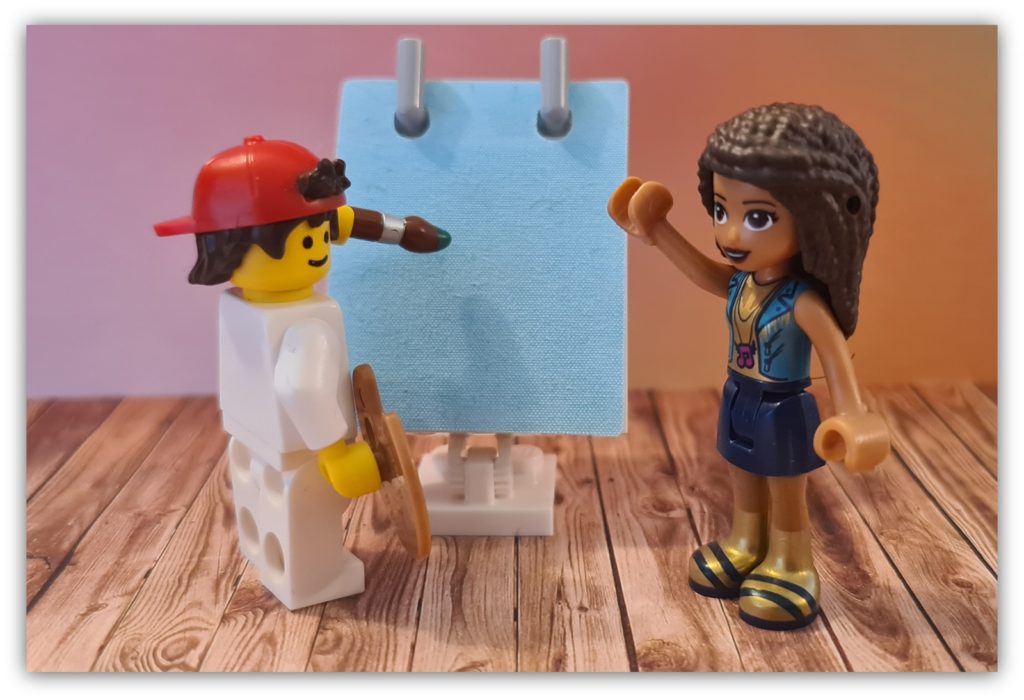 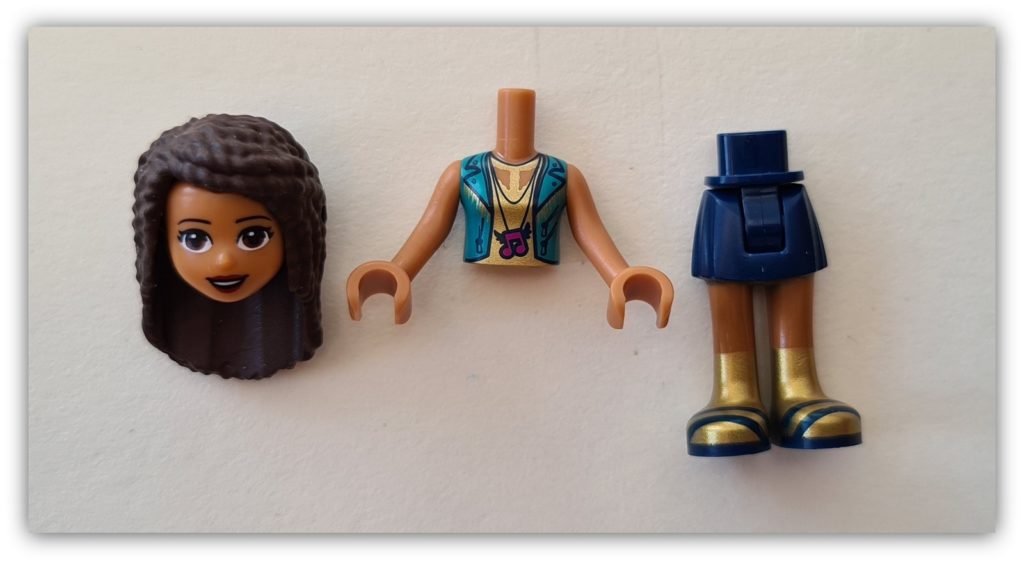 Drawing the head and torso

The second part that we need to look at is the head piece itself.  Where as the standard LEGO head is a squarish shape with rounded edges, the mini-doll head is far more curved and shaped; front-on the head has a shield shape; side on we can see the back of the head is a slope and also the face curves in at the front, coming out for the nose and cheeks. We can also see that the nose also protrudes a little.  I’ve sketched these below. 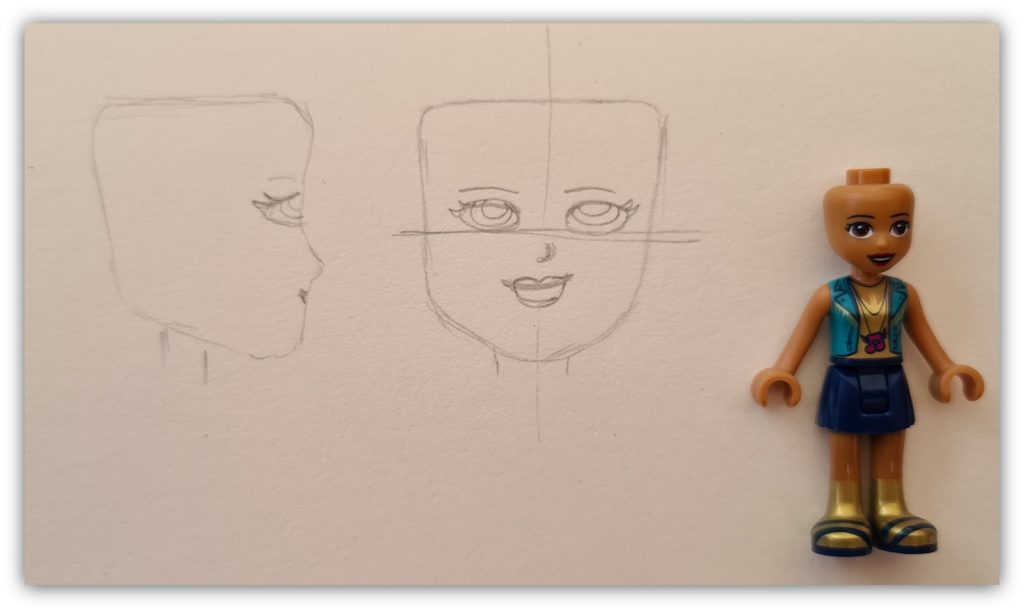 Because Andrea’s overall shape is more “real” than a standard figure, I’ve started to incorporate guidelines into the drawings to help me get a sense of perspective. As she’s slightly turned to the left, the vertical line is in the appropriate location. 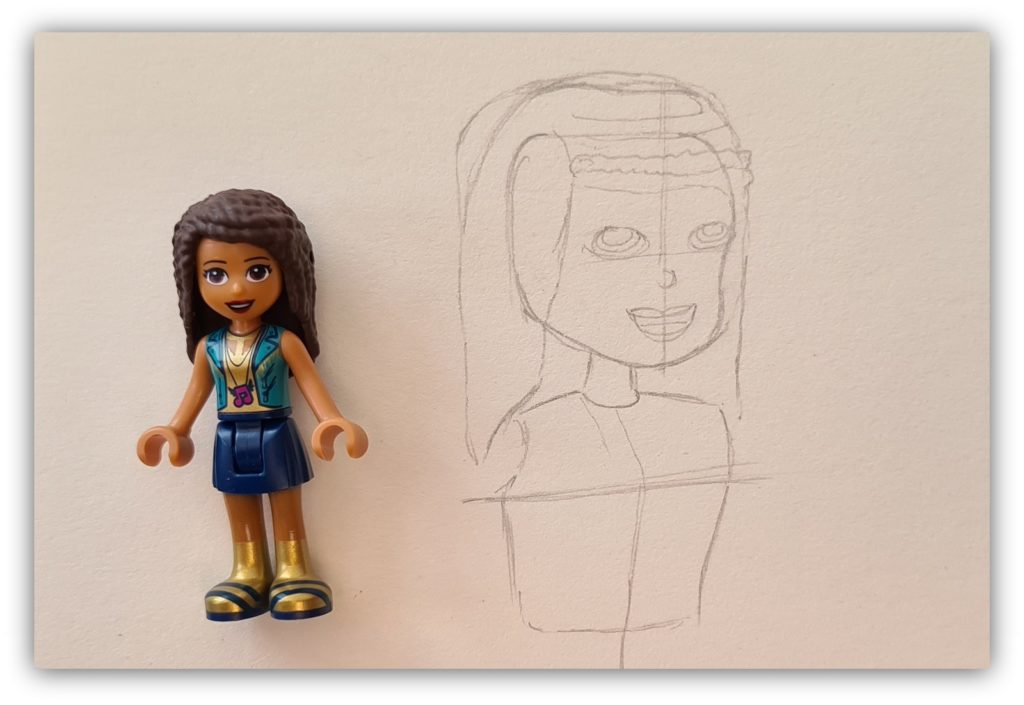 Starting with the head and basic torso, I first sketched the head before drawing the hair. In drawing the torso, I’ve slightly sloped the shoulders and given her that very narrow neck that they have.  I have also introduced the shape of the torso which does have a feminine curve to it. As an aside here the front face to both the ‘girl’ and ‘boy’ figures are very similar, but side on the chest curve is higher and more masculine on the ‘boy’ figure. It is subtle, but in keeping with the overall design of the figures. I have since also found out that there is a different torso shape between the girls and the ladies in the LEGO Friends theme; so that’s three different torso shapes! 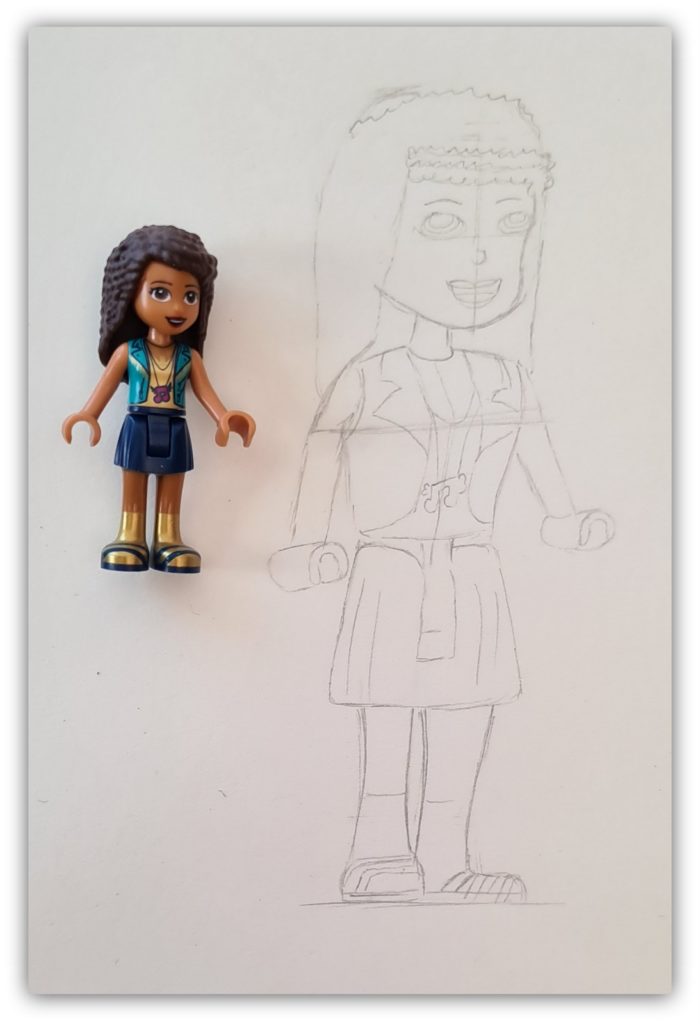 Moving to the remainder of the figure

Once I finished sketching the torso printing, I moved onto the arms and legs. The arms are quite thin compared to a standard figure and sweep away from the body. To me, the hands seem oversized compared to the arms.  I think that this is a practical consideration, but you may elect to slightly reduce the size of the hands in your drawings.  The skirt and legs are quite simple to sketch out, but again these require a freer hand than straight lines.

Once done, the final stage is to colour in. Because the theme has elected to make use of more “flesh tone” colours, this may be a challenge if your collection of inks is limited.  In the image below, once I had coloured Andrea in, I used image editing to lighten the skin tone to get a better match. 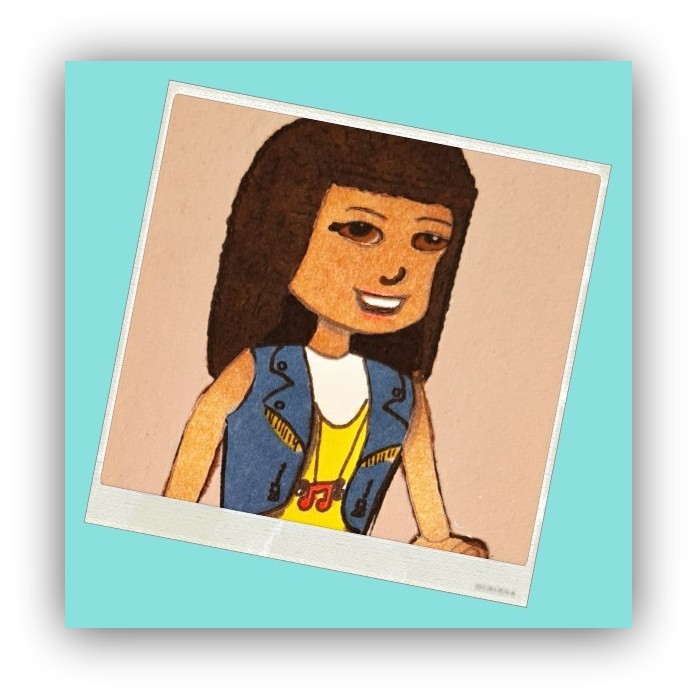 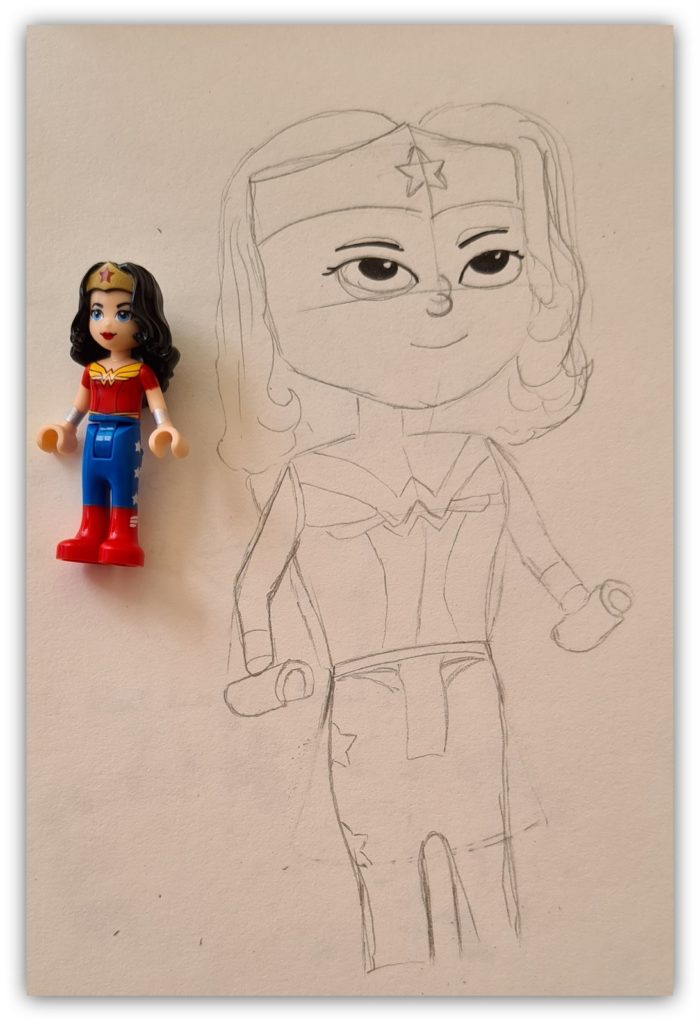 In hindsight, I can see lots of details that I didn’t get right in my sketch, if I was going for an accurate drawing of Wonder Woman.  Either the face was too wide, or the tiara is set to low; the hair doesn’t have enough “bounce” to it and instead looks a little flat; and the arms are just a little too short, the hands should be more at hip level.

Those more observant will also spot a sketching mistake; that I had started to draw a skirt before realising that she isn’t wearing one! 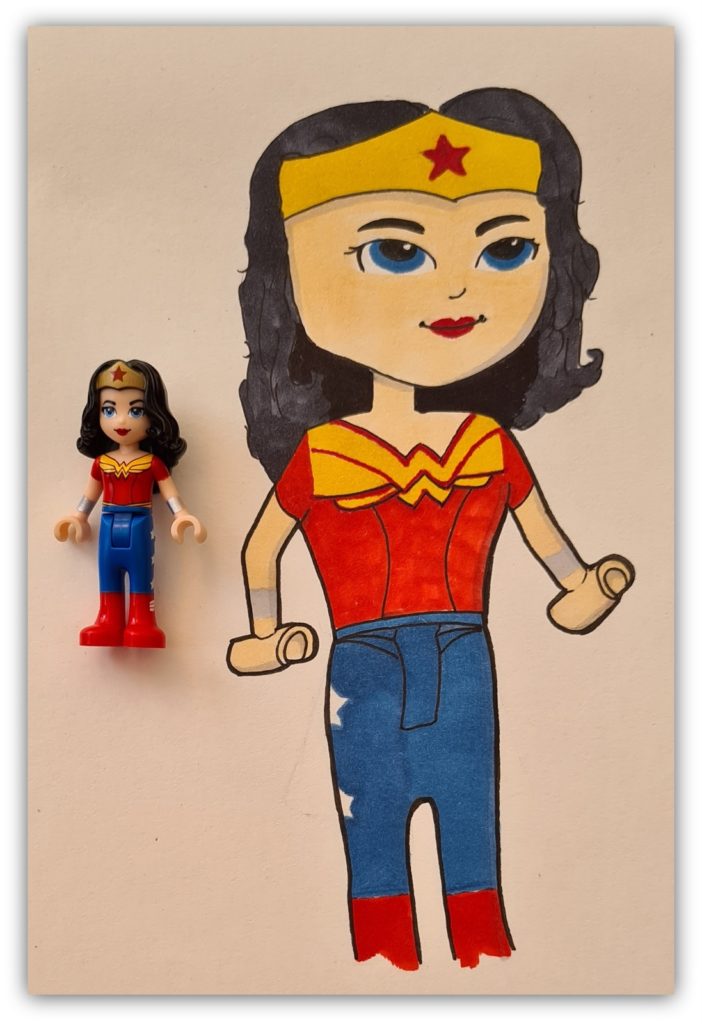 Fortunately, I work in pencil first just in case I do make mistakes; again, eagle-eyed readers will still see the flair of the skirt by Wonder Woman’s right leg.  There’s a lesson to put less pressure on the paper!

I’ve tried to use a thinner ink pen in drawing the features in my drawing but going around the outer body with a thicker line.  But what I also did was to “draw” the bottom of the eye by just using the flesh tone ink. Her bracelets were coloured using a light grey colour.

Like Andrea, I also decided to show what I wanted and hide what I didn’t using digital editing. Whilst her face does look a little flatter, I’m still quite pleased with the results.

How to Draw LEGO Friends: A Summary

If you are into drawing, or would like to get into drawing people, then there are some excellent books out there to give you tips and pointers to help you develop your skill. LEGO figures, especially Friends characters, are a great tool for helping you study and practice your real-life drawing as unlike a standard LEGO figure they have more curves and shape to them.  I still enjoy the challenge of drawing LEGO figures as they are quite fun, but they can be sketched a lot quicker because they have such straight lines to them.

I hope that these articles have inspired you; if you’ve read this, looked at the pictures and think “I could do that” then please have a go. Don’t be afraid to share your results; I look forward to seeing them!