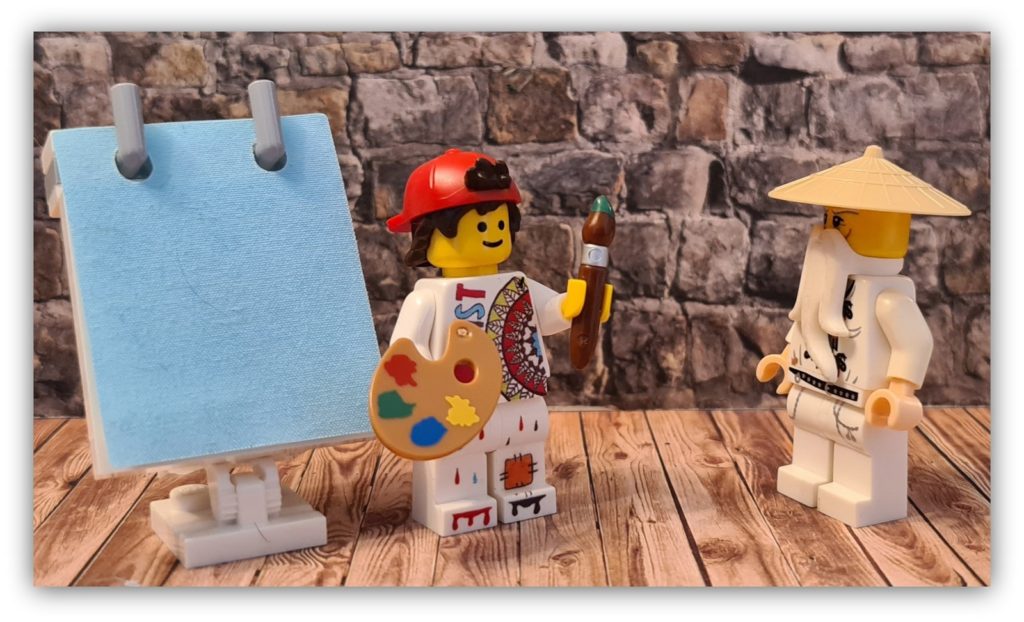 Following on from our article on How to draw LEGO Batman, I decided to look at another popular theme in LEGO, that of Ninjago. As before, we will start by looking at the themes and our subjects, before we pick up the pencil and start to draw.

Ninjago has been available in one form or another since 2011.  As well as over 250 playsets, there has been a TV series, a film, video games and a regular comic.  This means that there is plenty of material to work with.

If you’ve not come across Ninjago before, the theme is based in a place called Ninjago and takes many East Asian myths and cultures into its story telling. Our main heroes are teenage Ninja, battling with the various forces of evil and guided by their teacher and Mentor, Master Wu.

I will admit that I haven’t been paying close attention to the theme so I’m not sure of the whole storyline, but I did find that there is a Wiki Fandom site that has just about every piece of information any one would ever need to know about Ninjago!

To the drawing – almost!

As the theme has been running for almost nine years now, there have been many adaptions and changes to the characters and their design. Partly due to the storyline’s natural expansion, but also due to the improvements in general manufacturing and printing quality.  What this means is that if I wanted to draw every character that ever was in the theme it would take a long time; especially if we included every enemy that Lord Garmadon had enrolled to help him.

Instead, I thought I would simplify my drawing scope. Searching through my toybox, I found a Sensei Wu, an original Kai minifigure and Kai from the more recent Arcade sets. This also gives us increasing complexity in printing and modelling.

As before, the approach will be to examine the figure to identify the key features we need to make sure that we include before working on drawing and sketching the figures.

So, let’s start with Sensei Wu. Realistically there are two very obvious features that define this character, the hat and the beard! The next feature would be the aged face. Everything else on this figure (as far as basic shape is concerned) is a standard minifigure. As this is our starting image, I’m going to draw him straight on. 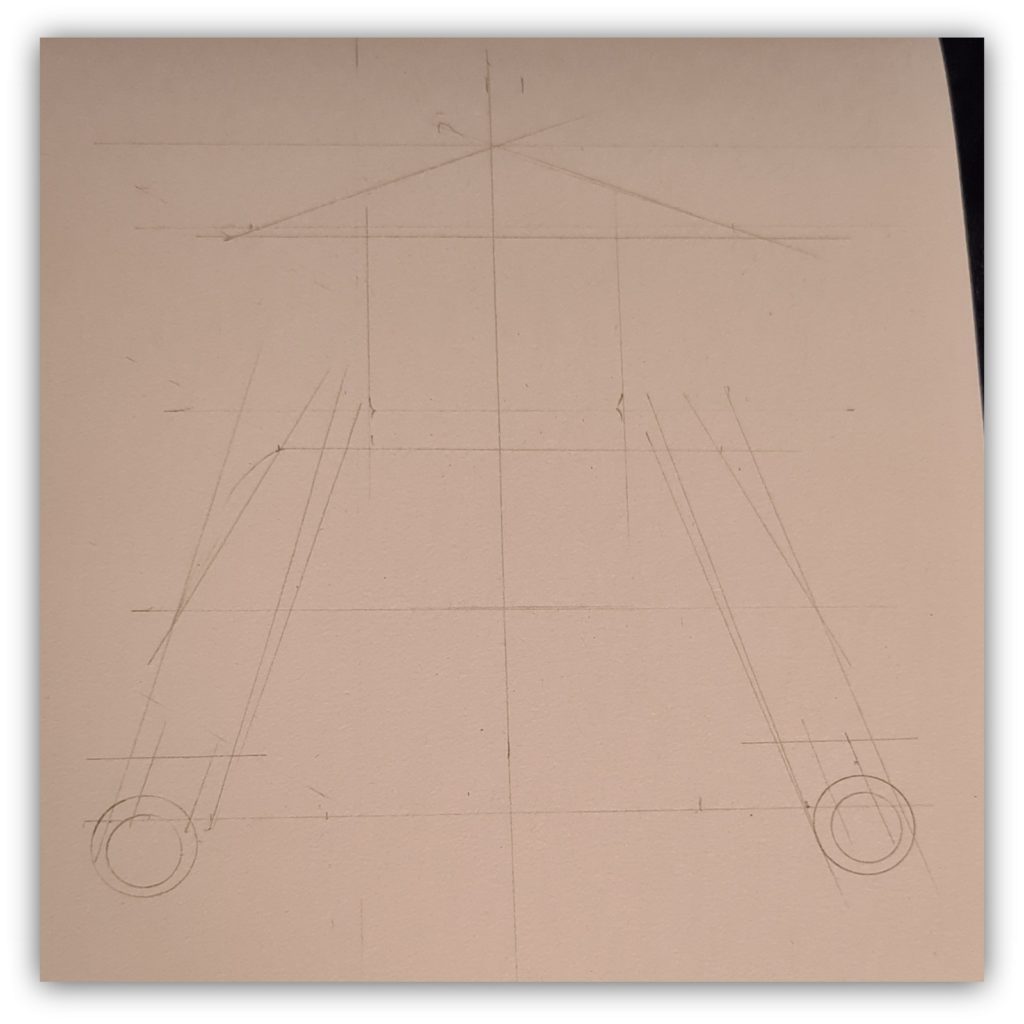 Because it is such a simple design there are a lot of straight lines to the shape. Once these are in place, we can add the outline: 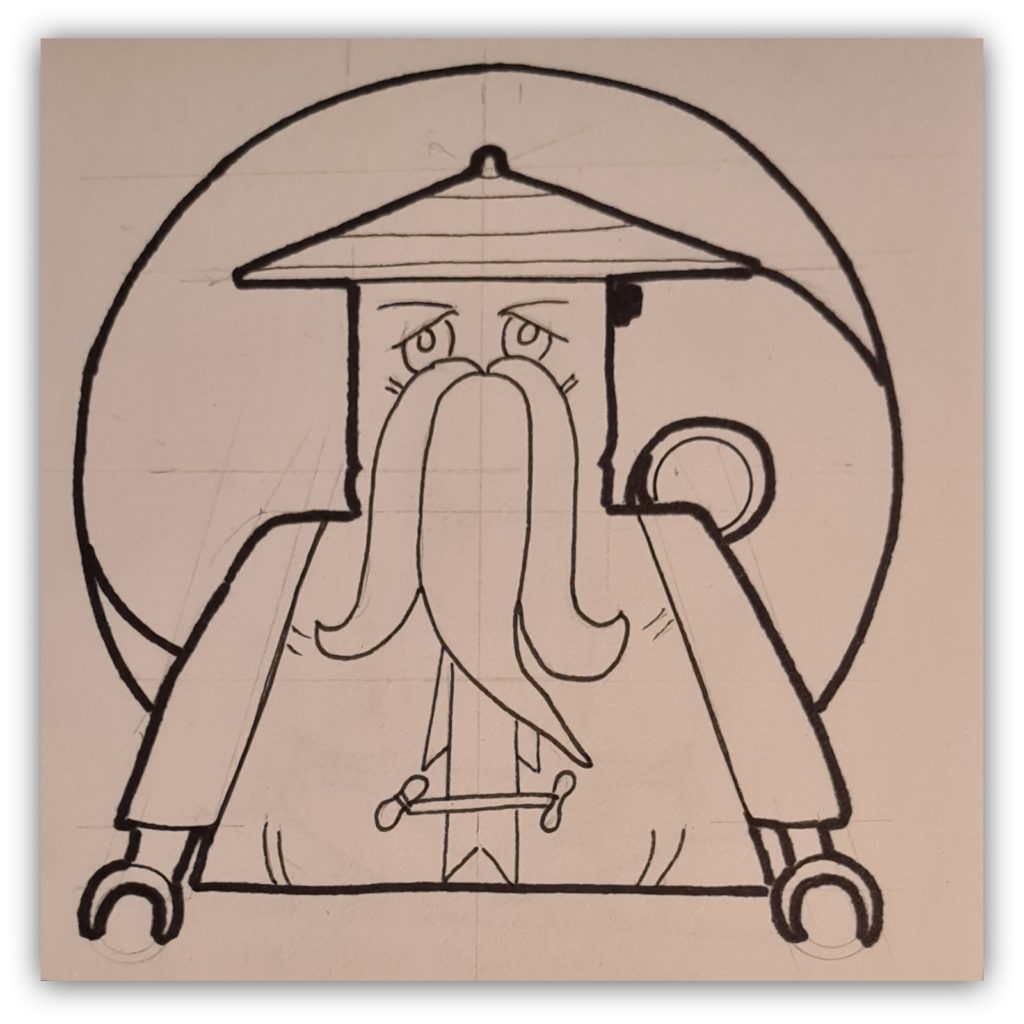 I decided to include the “yin-yang” design behind Sensei Wu; this would then tie back to the philosophical imagery that has been used in developing the characters. It also adds a simple, calm backdrop the figure.

Once the pencil lines have been erased, it was a simple matter of colouring in. 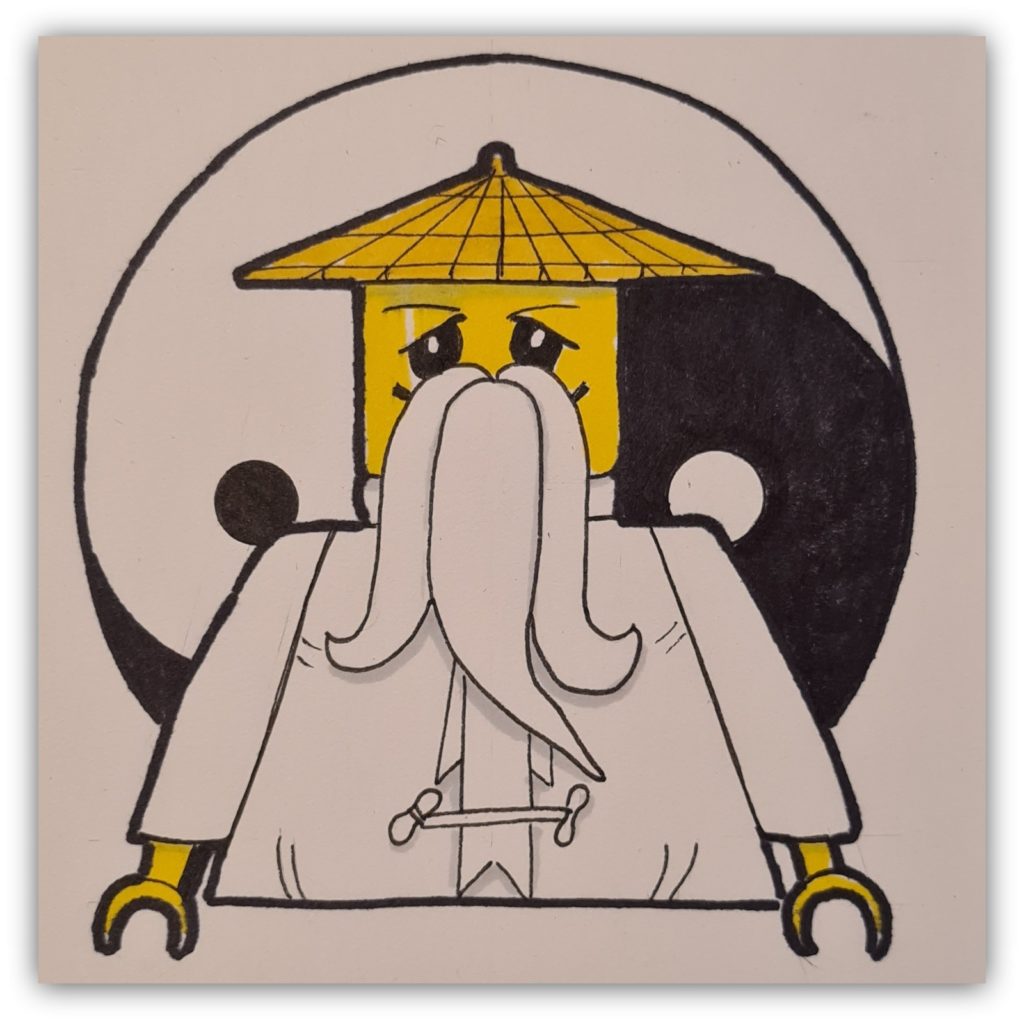 This is a very simple drawing piece. I could have just left it with the yellow and tan for the skin and hat, but I have also included a light grey to add some shading, making the beard stand out a little. 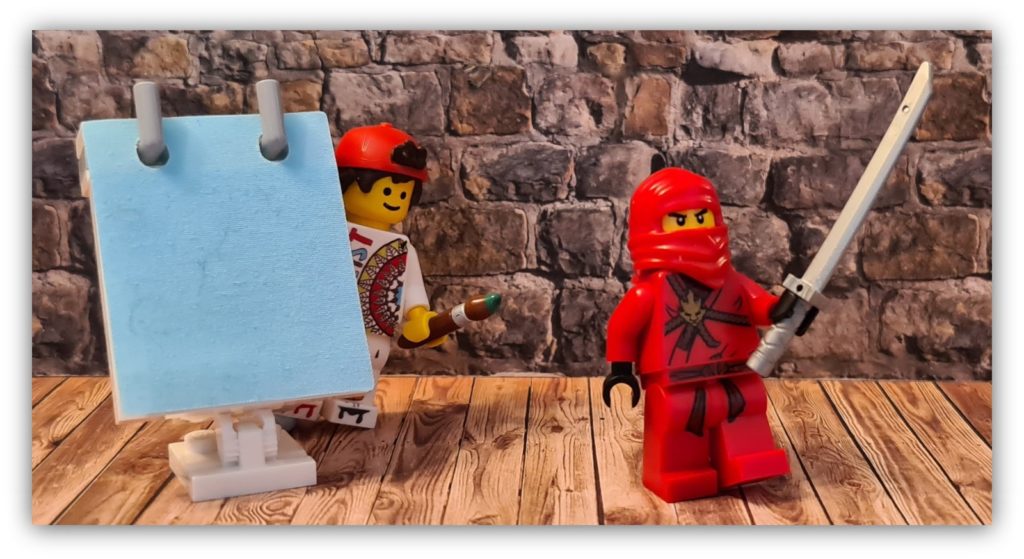 Our original Kai figure has a lot less individuality about him; the character wasn’t as fully drawn out when these minifigures were originally released.

Looking at the figure, the standout feature is the headwear and how it draws attention to the eyes. There is a little printing to break up the torso, but this is quite simple really. The other feature is the sword. This time, I want to try and introduce a little more movement into the figure than just a flat image like Sensei Wu.

When we drew the Batman figure, we included a curve to the legs, not unlike the ones we see online in the LEGO shop; however, looking at the drawing in the Ninjago comic itself we can see the artists have kept to the movements that LEGO figures make; that is, using a straight leg.

I decided to shorten the sword so it would fit better on the page and chose to angle the body backwards a little. Whilst the head is the most dominant feature of the figure, I thought that the body positioning was more important which is why I didn’t draw it first, but after I had sketched everything else. Once the head was drawn, I realised that the legs were a little too long, so shortened them a little.

I do like the design style of figures standing in front of text; to me it adds a little depth to the image. I used a single Copic red pen to colour the body; the darker edge on the right leg was because I used the brush rather than the point end of the pen.  I also used a red Sharpie which was a little darker to add the shading to the lines on the body. 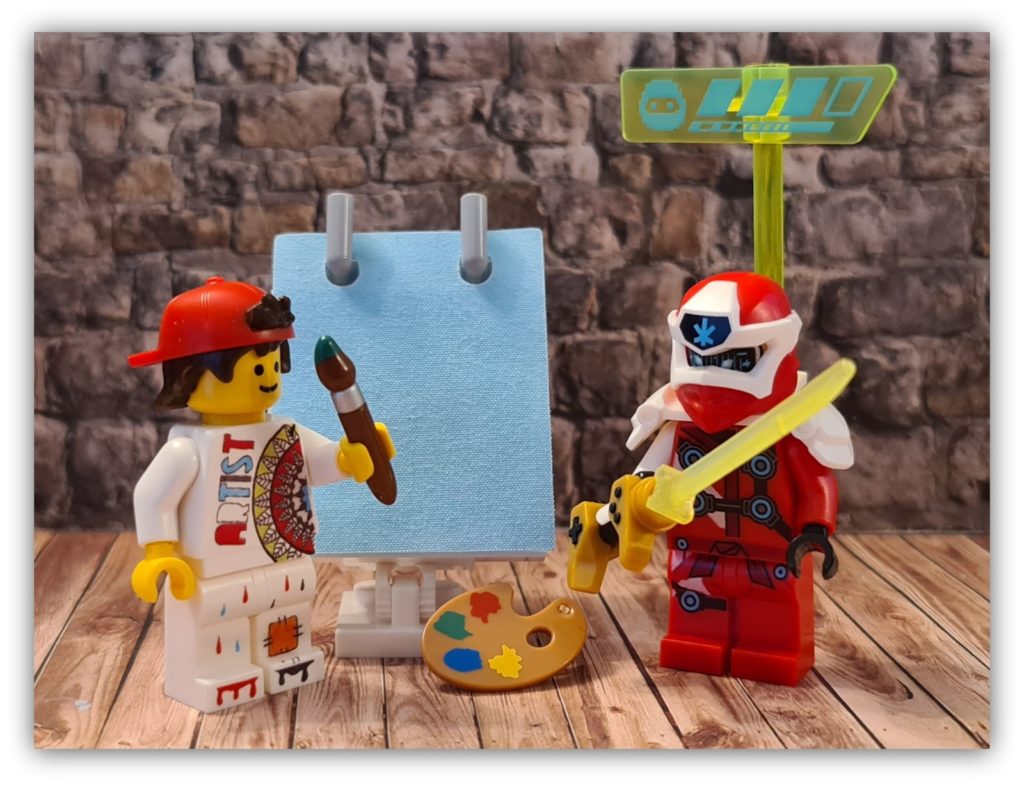 Arcade Kai is a lot more interesting to draw. There are plenty more colour differences and overall, it’s not just a standard minifigure with the battle epaulettes. There’s also the “gaming sword” and the Life Bar which I wanted to include.

This time, I decided rather than sketch out the blocks then start to shape them to the figure that I would just freehand the whole drawing. 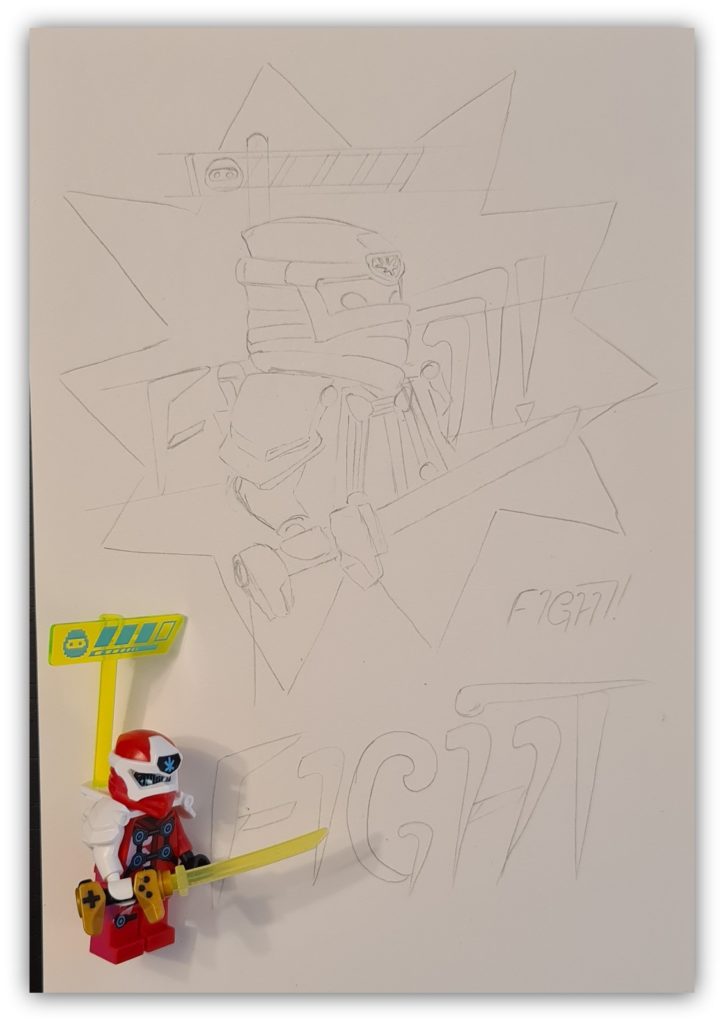 Because I had just finished drawing the original Kai, the basic head shape came out quite easily. Again, I wanted to shorten the sword, so it fitted the drawing better. For some, freehand drawing is quite easy, but I often find that I may get scale a little wrong, so sketching in pencil and not using a heavy hand means that I can erase and resketch quite easily. 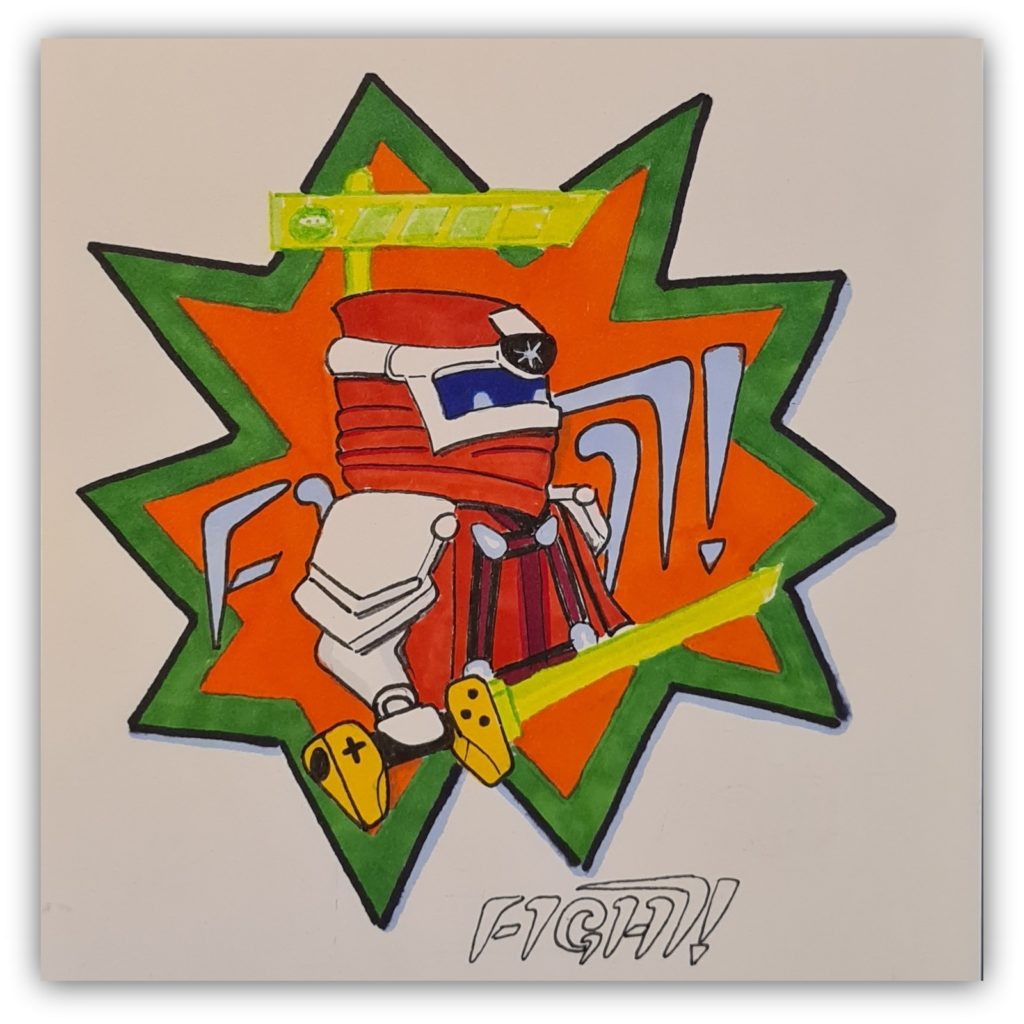 The biggest challenge for me in this drawing was the life bar and the sword. As they are clear plastic pieces, I didn’t want to include any outlines to them. Normally, I can ink over the pencil line to get the outline, but in this case, I had to erase my pencil lines, then draw back in using the inks. I think it worked well for the sword, but I’m less convinced with the Life Bar. Looking at it now, perhaps I should have allowed some of the background to colour through.

With the shading in place and the “FIGHT!” wording behind Kai, I’m quite pleased with the result.

How to Draw LEGO Ninjago: A Summary

My drawing experience has really come from practice and a couple of online courses; so, I don’t profess to be an expert in this field. I do draw for fun and pleasure and most importantly I draw for me. That said, I’m happy to share my drawings as I believe that it proves that anyone can draw if they feel they can and that all that is really needed is pencil, an eraser and some paper.

I’m sure everyone will pick their favourites; but perhaps I shouldn’t have suggested that the Kai figures fight it out for which was the best… 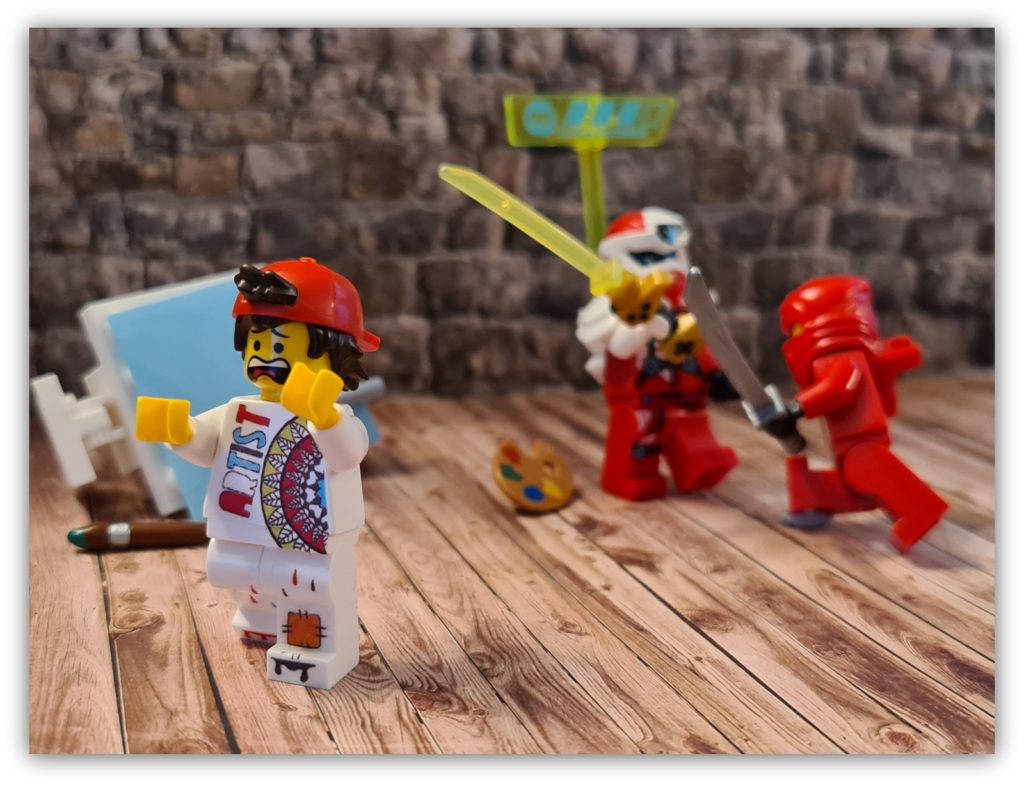 Can LEGO Go in an Aquarium – Creating Fish Fans of LEGO!