Ladies and gentlemen, thank you for joining us as we continue our newest series: Interview with an AFOL. In the following weeks, every Tuesday and Friday, we will be having interviews with AFOLs of different kinds. There will be photographers, collectors, builders, animators, and even bloggers! We’ll try to learn a little more about them and see how they came to love the plastic brick (or people) obsessed about. Some of these AFOLs are well known throughout the community, while others, not so much. No matter who they are, they are all incredible people who have at least one thing in common: Love for LEGO.

Today we have Gayle Spiller, a.k.a. gaylespiller on Instagram.

I live in a small village in Oxfordshire, England at the foot of the Chiltern Hills.  I am married to a composer for whom I occasionally sing, write and compose songs for TV and record.  I am a mum to a teenage son and step-mum to a grown-up daughter. I have a BA(Hons) in Archaeology from Reading University.

Unlike most others, my LEGO journey began as an adult.  Up until a couple of years ago we held family passes for LEGOLAND, Windsor and my son and I also loved playing all of the TTGames LEGO video games and liked to make sure that we were among the first to get the exclusive minifigures that came with them.  Over the last few years, we built up a large collection of sets and began collecting the CMF at series 10. During this period, I would occasionally create things for his school projects (e.g. one year we made the Taj Mahal from our own pieces rather than buy the set) but in the beginning I was more focused on collecting and building sets. Unfortunately, my son has now succumbed to The LEGO Dark Ages but my passion/obsession still continues.

What about your journey with building?

My first MOC really began because I was unable to acquire a retired LEGO Atlantis set, so I decided to try and make an Atlantis scene with the parts that I already had.  This was a real turning point for me. I had been suffering from anxiety and discovered that the cognitive creating and building process had a real and positive effect on my mental health, and this build kickstarted a new creative phase with LEGO which has continued to this day.

Initially, I built everything whilst sitting on the floor of our smallest bedroom surrounded by bricks; it was chaos, with parts strewn all over the floor of a 9×7 room (which also doubles as the guest bedroom and vocal/recording booth) in plastic trays and polythene bags.  Last year I moved to another room, purchased two Ikea desks and some drawer units and suddenly everything became significantly more manageable.  It’s no understatement to say that it’s still extremely untidy but somehow there is now a semblance of order. 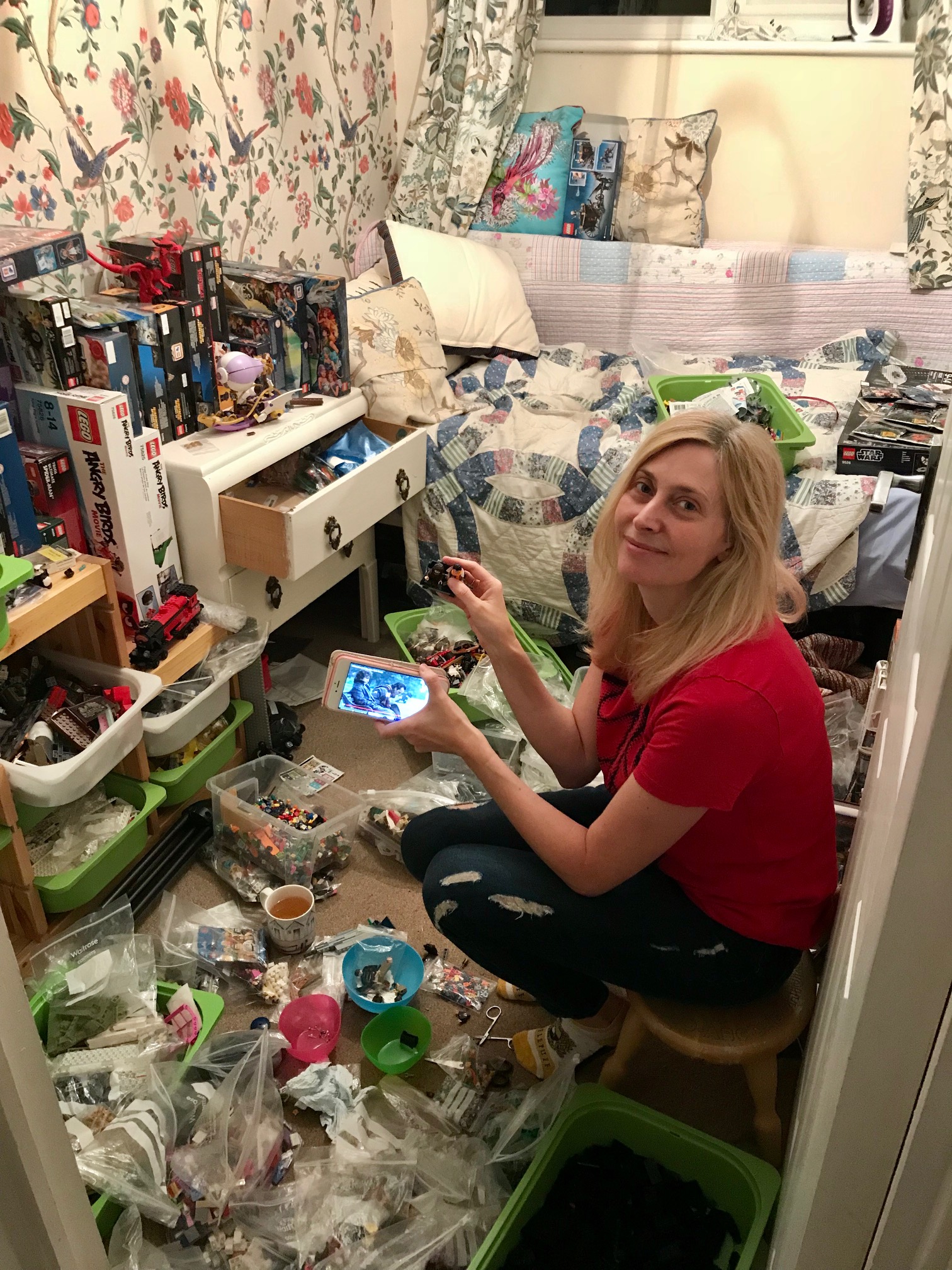 What do people around you think of your obsession?

I’m lucky in that my family are very tolerant of my passion, although my son will no longer accompany me to LEGO stores after I spent three hours in the Watford outlet one Saturday afternoon. Generally, they are very supportive and have got involved in some of the outdoor projects, helping to hold things up, shine lights, etc.  One of my favourite days was when my husband and 2 cousins accompanied me to Regents Park, London, so that I could faithfully recreate a scene from the Bruce Robinson film “Withnail and I” (one of my all-time favourites) in the original location. Having them with me definitely helped ease the self-consciousness that can come with outdoor shooting and rolling around on the ground looking for the correct angle.

For me it’s the Harry Potter, Lord of the Rings and The Hobbit series. My favourite set is probably the Diagon Alley 10217.  My biggest regret is not having purchased The Tower of Orthanc.

Inspiration comes from many genres; film, art, music and of course LEGO. There are also so many people within the LEGO community who inspire me. Some are amazing builders, some are great photographers and others are Photoshop wizards.

In particular, I am a huge fan of technical builders like Xenomurphy (Thorsten Bonsch) and Ranghaal (Ralf Langer) who create intricate, detailed and beautiful builds that I could (and do) spend hours looking at.  Balbo._ (Patrick), who gives so generously of his time to explain with tutorials, is an incredible resource.

There are also so many other people who inspire me that I’m reluctant to list them for fear of missing anyone out, but they know who they are and I am always grateful. The Instagram LEGO community is such a friendly and inclusive environment and it is definitely my happy space.

You take beautiful photographs. What kind of gear do you use?

I have a Canon EOS 5D mkIII with a few different lenses.  The glass I use the most for LEGO photography is the Canon EF 24-70mm f/ 2.8L II USM which is a great general-purpose lens. I have a couple of small ring lights and some coloured filters.  I tried using a light box but now I mainly just use coloured paper as a backdrop and then edit it all in Photoshop.

Once I have an idea, I tend to place a Bricklink order for the parts I think I’m going to need. I don’t sketch it out as I do have a rough pre-conceived idea of what I think the final image will look like. Once I’m building though, things often evolve and an idea can change direction. If it’s a scene from a film, I like to keep the build as faithful to the source as I can, often using a movie still or an image for reference.

I absolutely love Photoshop.  If I’m recreating a movie shot, I like it to be as faithful as possible to the original and so, if something is not available from LEGO, I’ll do my best to edit it in. However, occasionally someone will want to know about a particular image used and can be disappointed to learn that it doesn’t really exist (except in my head and the final edit).

My ideas have often come from Art, Film, TV and Music.  However, mostly it’s just the musings of a random mind.

You seem to have an amazing collection. What do you usually collect? Sets? Minifigures? Rare parts?

I collect sets, pieces and minifigures.  I would say that I probably buy less sets than I used to and make more parts orders.  I also collect the CMF series which I usually frame although wall space is now becoming scarce (however it is quite an interesting wallpaper).

Yes, as much as it’s possible to be.  If there is a franchise that LEGO don’t make, for example Mr. Bean, or John Wick, then I’ll buy those figures from Firestar Toys who custom print onto LEGO.

One quick look at your Instagram page, and I am in awe of your builds. Do you build digitally before you build physically? Or make a draft of the build with random colored parts before moving on to the main build?

I completely understand the appeal of virtual building; it looks great, you never run out of parts or colour palettes, but for me the physical act of clicking one brick to another is a cathartic process and I can’t see that changing anytime soon.

Do you keep your builds? Or take them apart after a while?

I don’t tend to keep my builds, and even if I do, the ones that I have kept get gradually whittled down as and when I need a specific part.  I also don’t have the space to hoard them.

What is your favorite build? And of course, why?

My favourite build was probably Alice in Upside Down Land as it stretched me as a builder and it was great fun finding the figures and parts that were opposites to each other.

Do you have any advice for other builders? Tips?

If I have any advice to give, it would be build for yourself, build what you like, what you’re passionate about, do it to make you happy.  Don’t do it to gain followers or likes, be your own authentic self and build to your own timetable. If you do connect with people, or even that just that one person, then that is just an added bonus.

And that’s it, folks! Thank you, Gayle, for having this interview with us and letting us take a sneak peek into your world. As for everyone else, don’t forget to check out Gayle’s Instagram page and give her some love! She is an amazing builder, and the pictures she takes are true pieces of art.

All images belong to gaylespiller

Interview with an AFOL: legotrooper_89

Interview with an AFOL: Richard Jones of the Rambling Brick