Ladies and gentlemen, since the beginning of July, we’ve been having interviews with AFOLs of different kinds. We’ve had a chance to learn so much about so many of them. Today, we conclude these series, at least for now. However, we go out with a BANG! Our final guest of these interviews is none other than Loki himself!

So please join me as we get to know more about the future ruler of Midgard, or as he’s known on Instagram and Twitter, loki_lego. 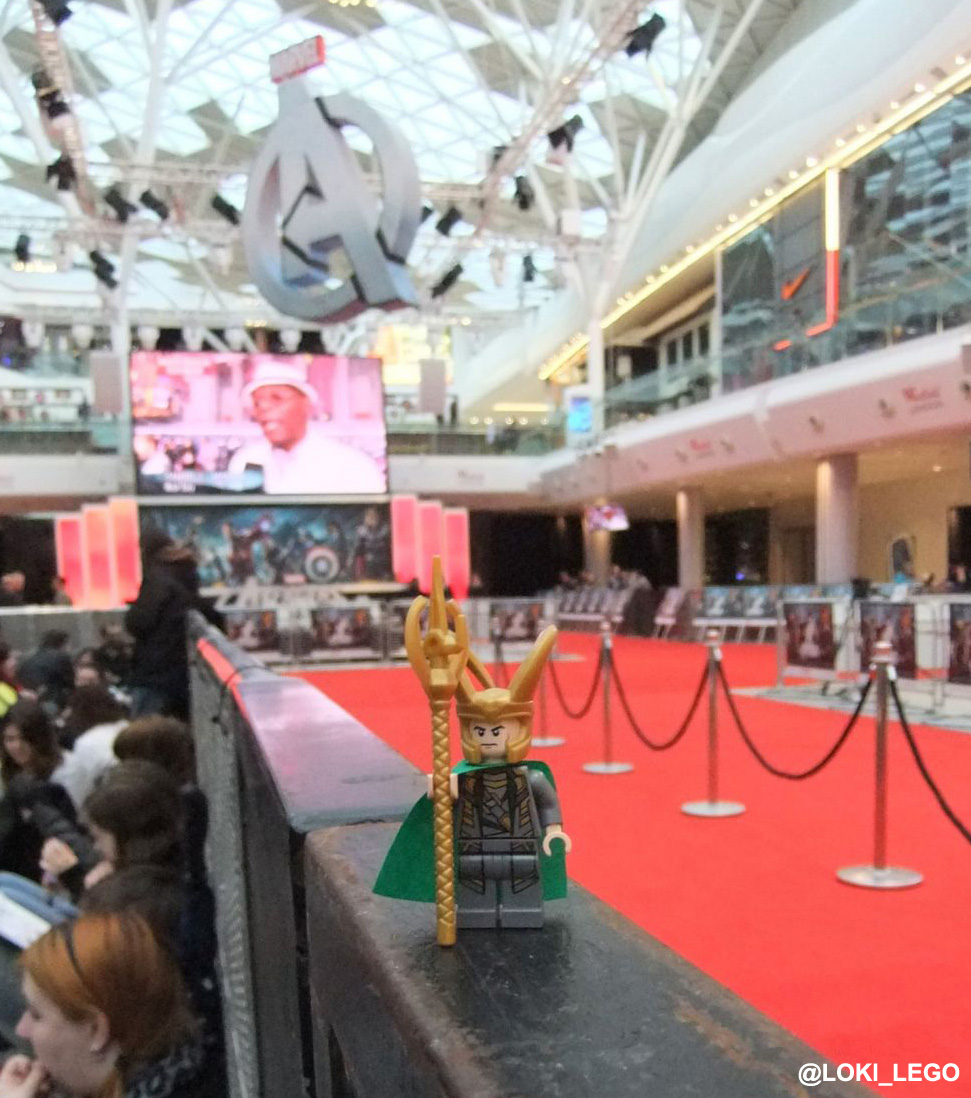 You need no introduction, but for the ignorant who haven’t heard of you, can you tell us a little bit about yourself?

Greetings, mortals of Midgard. My name is Loki, and I am your future King.

For the past 8 years I have recreated the works of actor Tom Hiddleston (who plays me on screen) in LEGO, as well as travelling the world to photograph LEGO in Marvel Cinematic Universe filming locations.

This may sound a little strange to some, so perhaps it would be best if I allowed Tom Hiddleston himself to explain my work…

I came into being when some mortal Marvel fans were introduced to me at the London premiere of Marvel’s The Avengers in 2012. They were impressed with my beauty, and how stunning my horns looked in the flash lights of the paparazzi, and later they decided to create an account dedicated to me.

What about your journey with photography/collecting?

My journey was a simple one at first, with pictures of me taken on phones, using no special equipment. As I grew in popularity my creators began to invest in more Marvel related minifigures, and started to recreate Marvel posters and trailers in LEGO, and humorous images of the various was that I might defeat the Avengers. I now shoot on a DSLR, which allows me more control over my photos, which has been especially important in my quest to visit the most recognisable Marvel filming locations around the world.

The Avengers are never pleased whenever I invade Midgard to take photos, but the mortals I have encountered have been most kind. I have never had a negative reaction when taking a photo in public, and most people are very interested and ask more about my work, even when someone is laying on the ground in Central Park to photograph me… 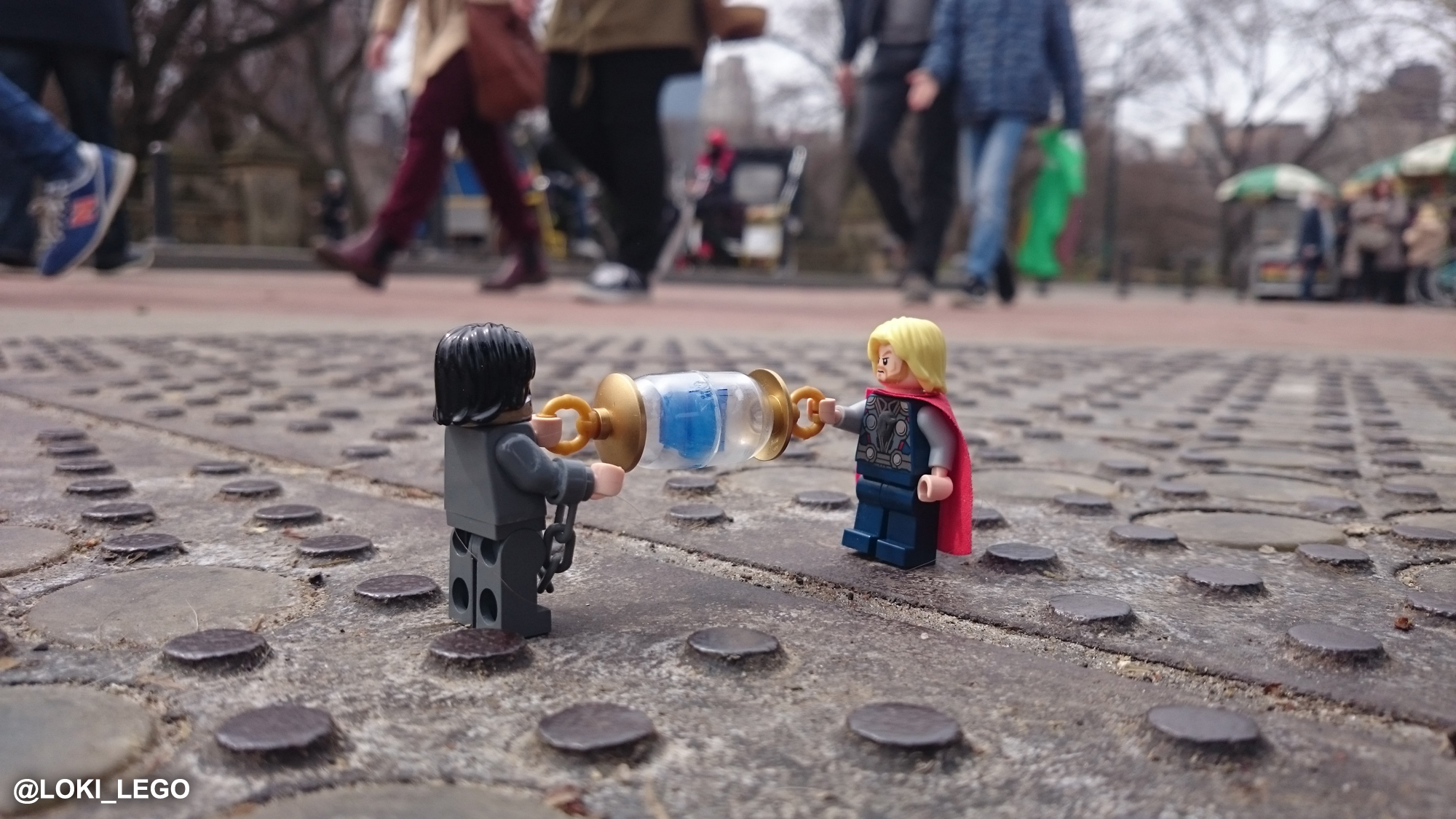 Marvel figures are my priority, although I also have a fondness for the Jurassic Park dinosaur figures, as they are magnificent creatures to ride into battle. 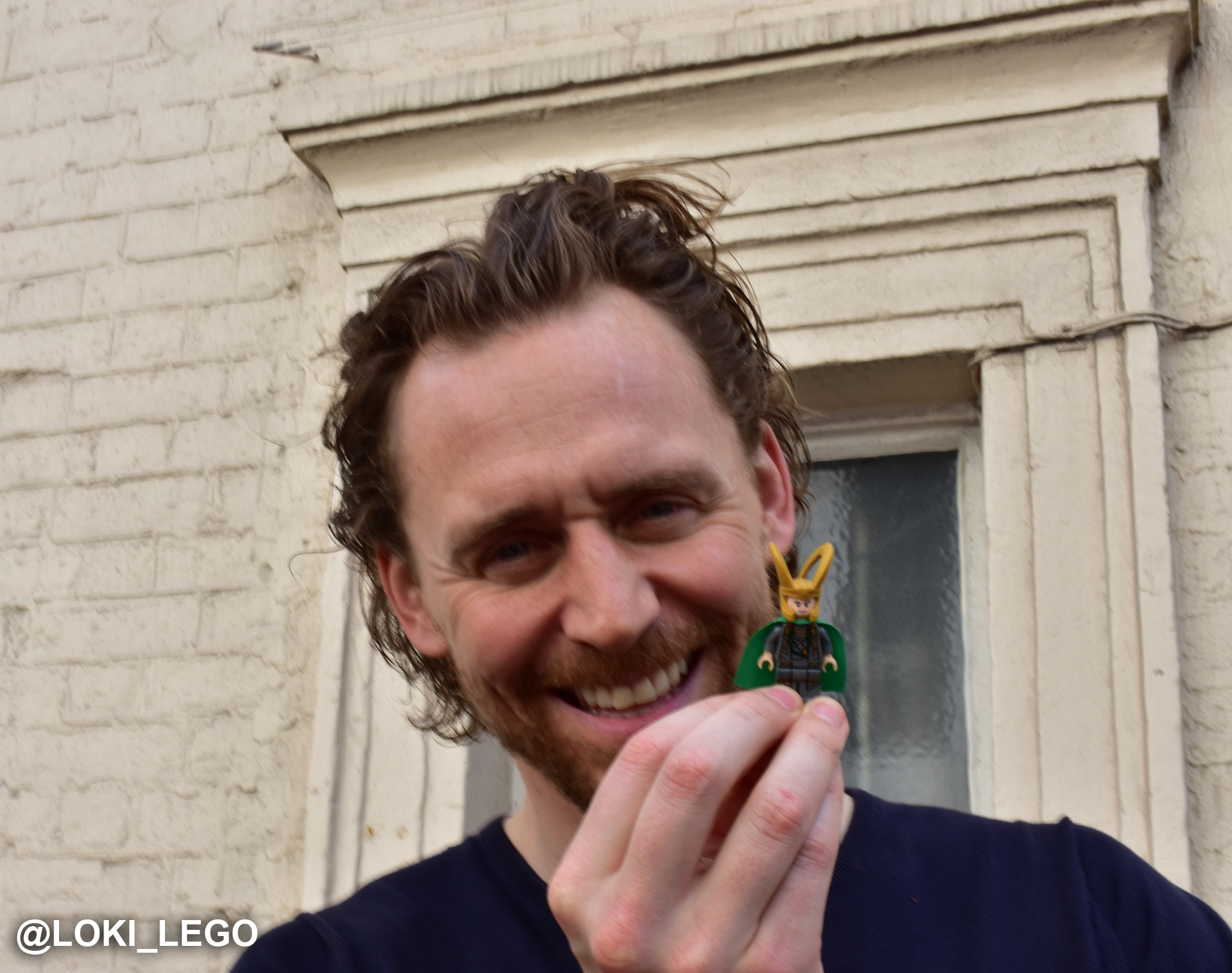 Tom Hiddleston inspires me every day, as without him I would not exist. I have connected with many wonderful people, and had so many incredible experiences in the 8 years I have been creating photos, including attending the Thor: The Dark World  premiere where I met Kevin Feige, head of Marvel Studios, and meeting the Russo Brothers at the set of Avengers: Endgame, none of which would have happened if Tom had not inspired me to pick up a camera.

Why Loki (apart from the fact that he’s awesome)?

I entrance all who come into contact with me with my stunning good looks, and devastating personality. All will fall before me when I am the King of this realm.

How long have you been collecting LEGO? What made you start?

The two mortal peons who create my images were avid fans as children, but then fell out of the hobby until they were introduced to my beauty. Now they have vast collections of minifigures that continue to grow with each new Marvel set released.

As I spend much of my time recreating Marvel posters and scenes I find figures are more important to my work, but some sets, such as the Age of Ultron Avengers Tower set

, and Tony Stark’s Malibu Mansion from Iron Man 3 have proved to be invaluable as background items for photos.

While not a purist, I attempt limit my custom parts to prints on genuine LEGO parts. As the Marvel Cinematic Universe is increasingly diverse in its casting, I have often found the range of LEGO heads to be slightly limited, so the custom heads available on Firestar Toys has been invaluable for recreating posters and scenes, as they have a larger range of medium and dark flesh tones available.

I also create my own custom sets using LEGO parts with a simple waterslide decal technique. This enables me to recreate Marvel film posters before the official figures are released, but has also led to many wonderful opportunities. For example, in 2016 I was commissioned to create custom LEGO sets for the DVD release of the Tom Hiddleston film High-Rise, and I also sent custom LEGO to Broadway for the opening of Tom Hiddleston’s play Betrayal, and to the set of Thor: Ragnarok in Australia.

During creation of the High-Rise sets for the DVD release of the film I found myself needing six LEGO Dalmatian dogs, and as they are quite scarce, I had to import them from across Europe.

What kind of gear do you use for your pictures?

I use a  Nikon D3400 camera and flash, coupled with a cheap light tent, and a Joby tripod, which allows me quickly change angles on the camera when shooting multiple pictures. The camera is ideal for using while travelling, as it sends the photos via bluetooth to my phone, where I can edit and post them immediately to my Twitter and Instagram account. 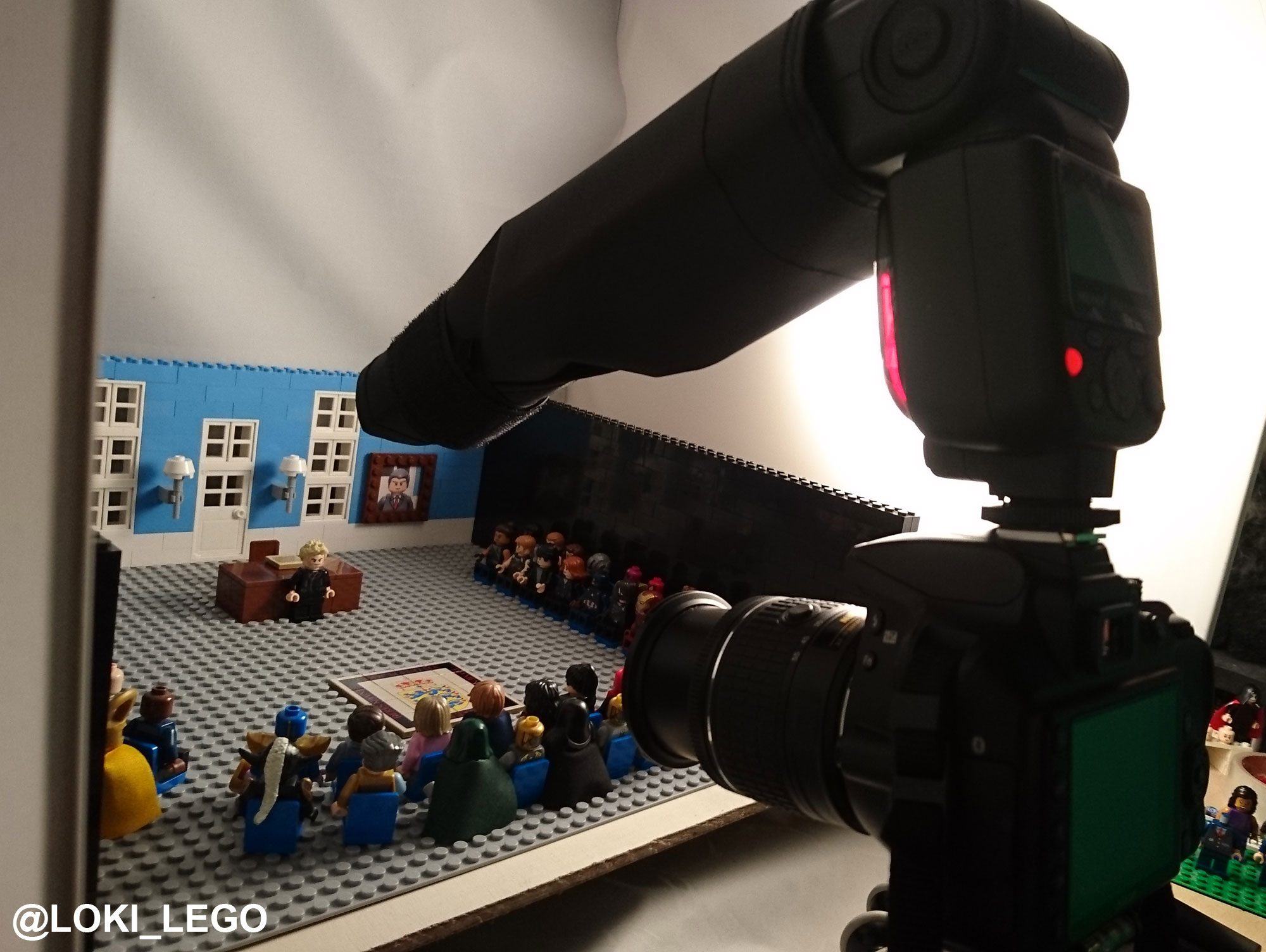 When visiting a filming location, I will spend many hours taking screencaps and investigating the real-life area on Google maps to find the perfect place to take photos to achieve a result similar to the film.

When planning a long project, such as my full-length recreations of the book High-Rise, or the play Hamlet, I will often spend time drawing various scenes by hand on paper.

Marvel and Tom Hiddleston films are my biggest source of ideas, but quite often trending topics on Twitter or the news will provide a topic for a humorous image.

What would you say to those who want to follow your footprints?

I have had many wonderful experiences as the result of my work, and met some wonderful people. I have made friends across the world, many of whom have had the pleasure of meeting me in real life, but nothing is more rewarding than a random comment on a photo that says I made someone laugh on a day when they were unhappy. Bringing joy to the lives of mortals, especially during these troubling times, when many are uncertain of the future, makes all the hard work worth it.

Wow, what an ending! Can you believe that we actually had the chance to interview Loki himself? I still can’t!! Thank you for sticking with us throughout these interviews and participating one way or the other. If you want to avoid Loki’s wrath, don’t forget to check out his Instagram and Twitter accounts.

All images belong to loki_lego, except the last one which belongs to his biggest fan

Tips&Bricks, Part 1: An Interview with the Founder

Meet the Team of the FireStar Toys Blog: Phil

Interview with an AFOL: nocturnelle9