Slowly but surely, the Overwatch heroes are making their way into the LEGO world. The first wave brought us 12 characters, and this new smaller wave has introduced Hammond the hamster, and now the Australia menaces known as Junkrat and Roadhog.

It’s somewhat odd that the LEGO Group would make minifigures of what can only be described as deranged, murderous, psychotic thieves. But these characters are some of the most favourite ones in the Overwatch universe, and LEGO did enter into this partnership with Blizzard Entertainment with their eyes open.

Fans of the game will no doubt enjoy adding them to their collection.

It’s been hard though to pinpoint what the sets of this series are supposed to be. Are they toys, or are they merely display pieces? 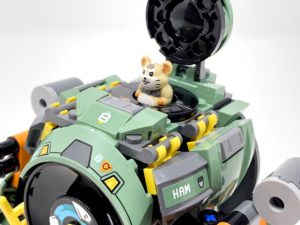 For instance, Dorado Showdown (75972) and Hanzo vs Genji (75971) tried to satisfy both sides, by offering a small, displayable backdrop – but sadly, there’s not enough content to make it feel like a fully playable set (Dorado’s pickup truck is cool though).

D.Va & Reinhardt (75973) can be both – they are wonderfully posable and displayable constructs that look great, but sadly they’re just too big to match the scale of the other characters in the series.

And that’s even truer for Bastion (75974), who’s so huge, you can’t really imagine him being part of the gang. He looks great though. 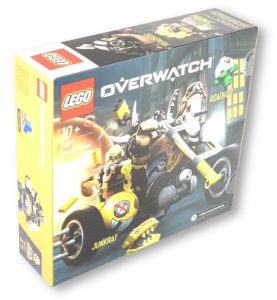 Finally we have Tracer vs. Widowmaker (75970) and Watchpoint: Gibraltar (75975), one small set, one huge one, but both clearly designed for play – maybe it’s not a coincidence that the probe from 75970 can be made to fit on top of the Gibraltar spaceship.

So LEGO were clearly not sure which would be the best way to market this series. But it looks like with Wrecking Ball (75976) and definitely with Junkrat and Roadhog, they are moving more towards display pieces – with a twist. 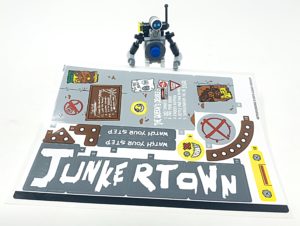 The set is broken down into two sections. Roadhog’s bike, and Junkertown. It comes with a fair number of stickers – 14 in total – and to make matter worse, some form a larger end design, which is always a challenge to apply. But take a deep breath – just like with the Scooby Doo Mystery Machine set (75902), it’ll be worth it in the end.

The bike is designed for Roadhog – a bigfig – to sit on, so it’s going to be understandably much bigger than any bike a minifig would be used to. Yet somehow, the scale seems to work.

It’s built primarily using technic pieces, which leads to a thin, yet stable and sturdy design. 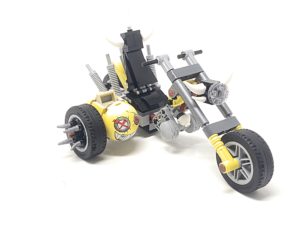 Junkrat rides in the sidecar. It’s small in comparison to the bike itself, but despite that, the end result looks great. Thankfully, the front maniac smile (one of Junkrat’s trademarks) is a print, not a sticker.

The bike’s construction is simple and effective – the only difficult section was connecting the front wheel to the rest of the structure. I personally found the bars to be incredibly tight, making it hard to slide other pieces through them to create the final design.

The bike can be used on its own, but it’s also intended to be placed on top of the rest of the build – which is a representation of Junkertown. 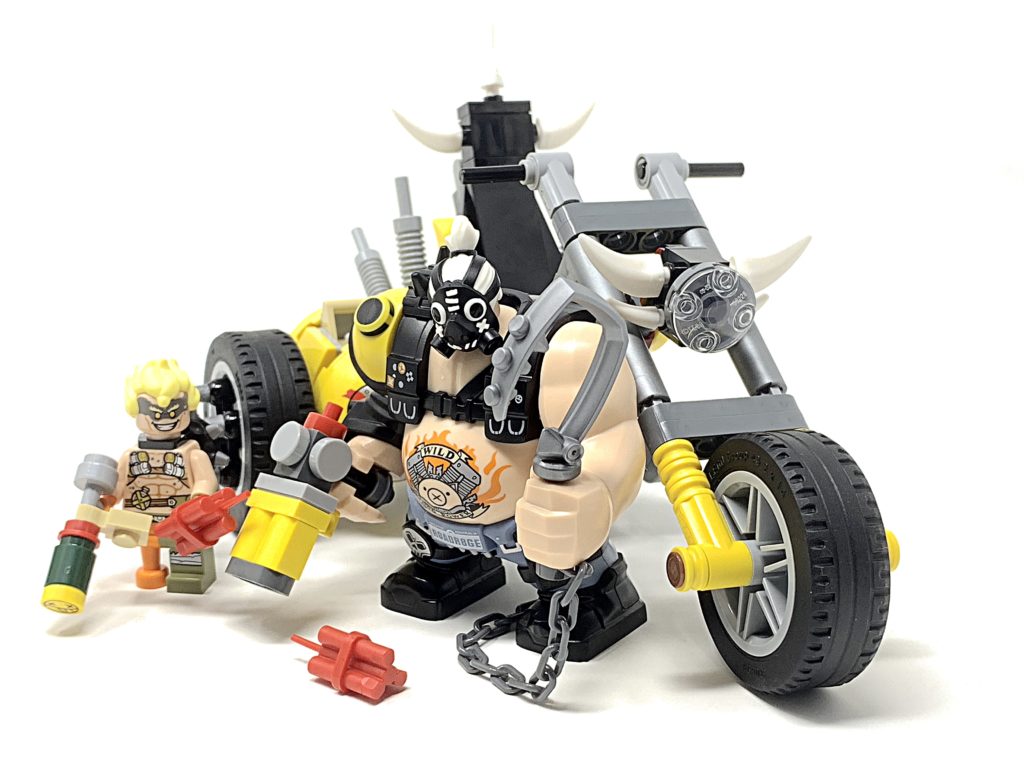 It’s not really possible to faithfully recreate a whole town, even a dilapidated one like Junkertown, with only a few hundred pieces, so LEGO wisely went for an overall feel.

The muted colours are a good match for the Australian Outback where the town is set, giving you the impression that bad though Junkertown may be, there’s really nothing outside its walls that’s worth venturing out for. 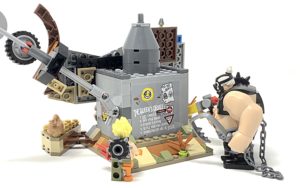 One side is filled with coins and treasure – likely what Junkrat and Roadhog stole which lead them to be banned by the Queen of Junkertown. One the other side, is a place where you can clip on a weapon – either Junkrat’s frag launcher or Roadhog’s scrap gun – and Junkrat’s steel trap (a car fender with teeth!).

There’s also a place for, of all things, a cute brick-built Pachimari. Those unfamiliar with the game might be puzzled by this, but there’s a reason for it: Roadhog is extremely fond of these cute little toys (maybe they represent his desire for a simpler more peaceful and gentler life, away from all the trauma, mayhem and destruction?) – he’s even got a barn filled with them outside of Junkertown (that barn isn’t represented in this set). 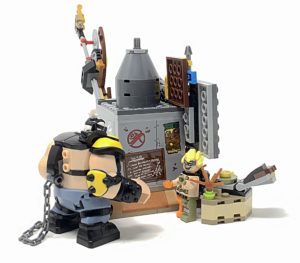 The centrepiece of this section is, well, its centre, a large pillar of sorts with posters on most sides. As expected, these posters are represented by stickers, but at least they’re on a large flat surface, so they’re easy to apply.

They’re one of the Queen of Junkertown (as with all posters of this kind throughout the theme, it’s been LEGO-fied, and so offers us a glimpse of what a minifig version of her would look like). The back has the Queen’s Decree, which are the 5 basic rules the residents of Junkertown must abide by – that side also includes a reminder that Junkrat and Roadhog are definitely not allowed back in. The back has the duo’s plan to steal the Queen’s treasure. See what I mean about this theme conflicting with LEGO’s usually more wholesome values of police chases and burglaries? Oh. Never mind. 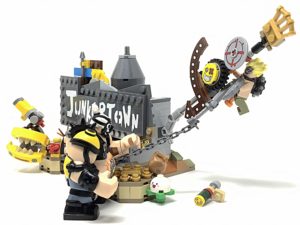 The front bares the large “Junkertown” side. This is the tricky part where you have to apply four separate stickers across it, but I must admit that the end result is definitely worth it.

The completed base looks great, whichever side you look at it from. The bike is designed to rest on top of it with the end of a technic bar just sticking out for this very purpose. This means the bike isn’t attached, just slotted in, and is therefore extremely easy to remove and replace.

I’m not usually fond of display sets as I see them more as dust gatherers than anything else (LEGO is a toy! It should be played with!), but the designer has done a great job with this one. It looks good, is practical, and has many fond nods to the game. 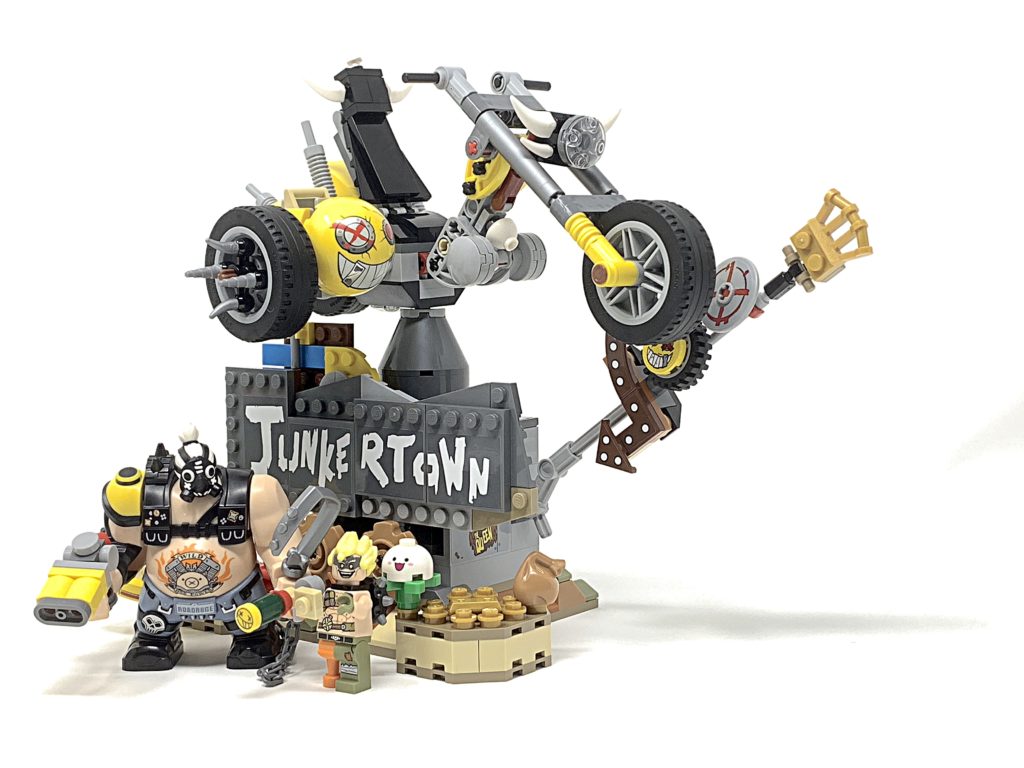 But what about the minifigs?

The deranged Junkrat is well represented in LEGO. His printed torso is covered with explosives, and he has two maniacal expressions and a very detailed and quite faithful hair piece.

There are some unavoidable limitations to the LEGO format – not having a nose does remove something from Junkrat’s look and personality (something which has also been an issue with the Flintstones set (21316)), but his wild eyes and mad smile does make up for this. His artificial leg is represented by an orange peg leg, and his bionic arm is only an orange hand in LEGO form.

Nearly all weapons in the Overwatch theme are brick built – this serves multiple purposes: it reduces the depiction of weapons in the LEGO universe, but it also grants versatility as you can construct any mad contraption that way, without needed to create a new mould for each device.

Despite the obvious blockiness of such a design decision, Junkrat’s frag launcher looks great, and is surprisingly very faithful.

Strapped to his back is his RIP-tire – a portable mine in the game. Going against what I just mentioned, that piece is a specially moulded part for this set.

Roadhog is a massive man, and unsurprisingly, is represented as a bigfig. Now I’m not usually a fan of bigfigs. The arm articulation is limited, and there’s none whatsoever for their legs – because of this, they’re really more of a display figure than a playable one.

This is the second bigfig introduced in Overwatch, the first being the gorilla Winston. However, just like him, LEGO have actually done a fantastic job in recreating Roadhog. His design is totally unique with his amazing belly tattoo faithfully recreated. I wasn’t sure this would happen since Hanzo’s impressive arm and chest tattoos weren’t represented on his minifig, but Roadhog wouldn’t be Roadhog without his massive hog tattoo.

His left arm is triple moulded, featuring shoulder and elbow armour, and his legs a filled with great moulded detail like his “ROADR8GE” buckle and skull kneepad.

As with Junkrat, he has a brick built weapon, his scrap gun, and a chain hook, which is a unique piece created for this set.

It’s clear LEGO are spending the resources necessary to make these sets look as good as possible with new custom pieces and great attention to detail, enabling them to faithfully recreate those iconic characters and their environment, within the confines of the LEGO style.

This Junkrat and Roadhog set appears to strike an almost perfect balance between a display piece and a playable construction.

Wrecking Ball has the potential to appeal to mech lovers as well as Overwatch enthusiasts. Junkrat and Roadhog may not find a market beyond the core Overwatch gamer, but any fan of these characters will happily jump at the chance to further their Overwatch adventures inside the LEGO universe. 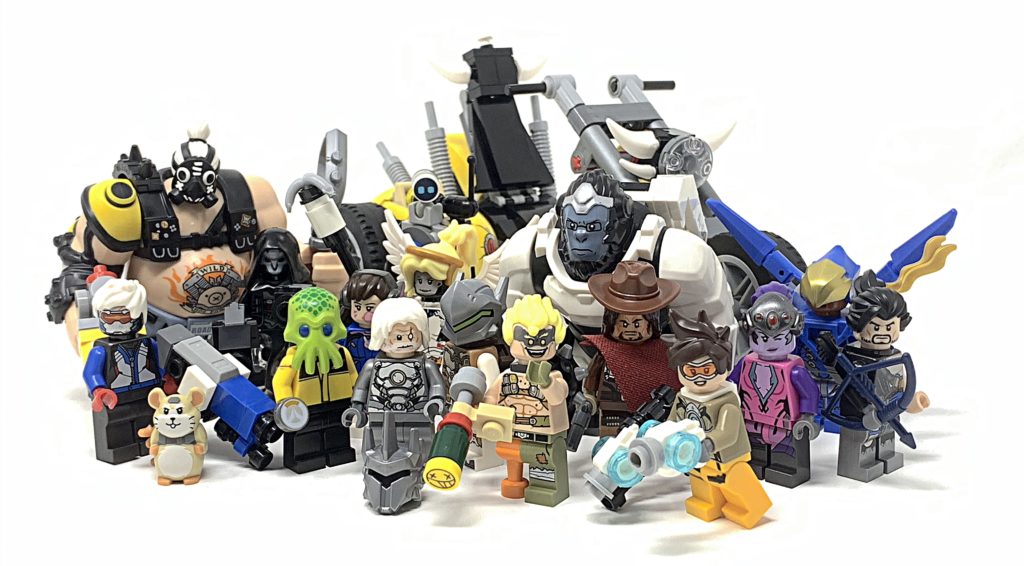 If you want to see how the model is constructed, have a look at this QuickBuild video:

LEGO Scooby-Doo, where are you? A review and a request!