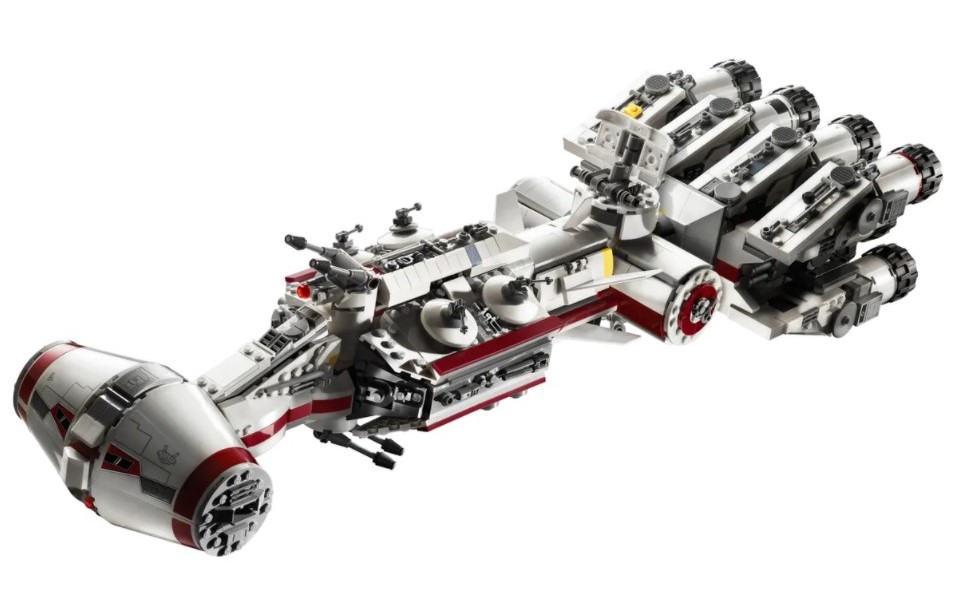 If you were to ask someone what they think the most iconic ship in Star Wars is, some may say the Millennium Falcon, others may say the X-wing, but many, like me would say the Tantive IV. Ever since seeing “A New Hope” for the first time, the opening scene of the tiny Tantive IV, fleeing the immense Imperial Star Destroyer has stayed in my mind. Unfortunately, I was unable to acquire the first rendition 10019 from 2001 nor the play scale set 10198 in 2009, however just over 10 years later, I was able to get the newest version of this fantastic ship. As LEGO 75244 is recently retired, I want to give some insight as to whether you should get the set before the price of it gets too astronomical.

The Tantive IV, in universe, is Bail Organa’s CR90 Corellian Corvette, used mainly for diplomatic missions by him and later his adopted daughter Princess Leia Organa. As senators they used the guise of relief missions, to both free and assist those persecuted by the Empire. The ship was present at the Battle of Scarif, in a maintenance bay aboard the Rebel Flagship. The Death Star plans were then taken to the ship on foot, whilst being mercilessly pursued by Darth Vader. With the plans safely aboard the ship was able to escape through hyperspace, which is where we next see it at the beginning of “A New Hope”.

I will start with some information about the set then dive into the review.

I will start the review with my favourite aspect of the LEGO set 75244, the minifigures. The first minifigure I will start with is Bail Organa. This is the first time we have ever got a minifigure of Bail Organa and it does not disappoint. He has a great torso print, front and back, and a matching olive green cape, in the older cloth style rather than the newer, soft material. The design accurately depicts his less regal, and more militaristic costume, as seen in Rogue One. The head prints are great too and both expressions, happy and grimacing, capture the likeness of Jimmy Smits very well. The hair is reasonably plain but does its job, perhaps some dark grey printing on the area near the temples would be more fitting for his appearance in Rogue One. The legs are also without printing. This is understandable as his trousers are plain in the film, but some creases would have been a welcome addition. Overall a solid figure which many collectors will want, as he is exclusive to the set. 9/10 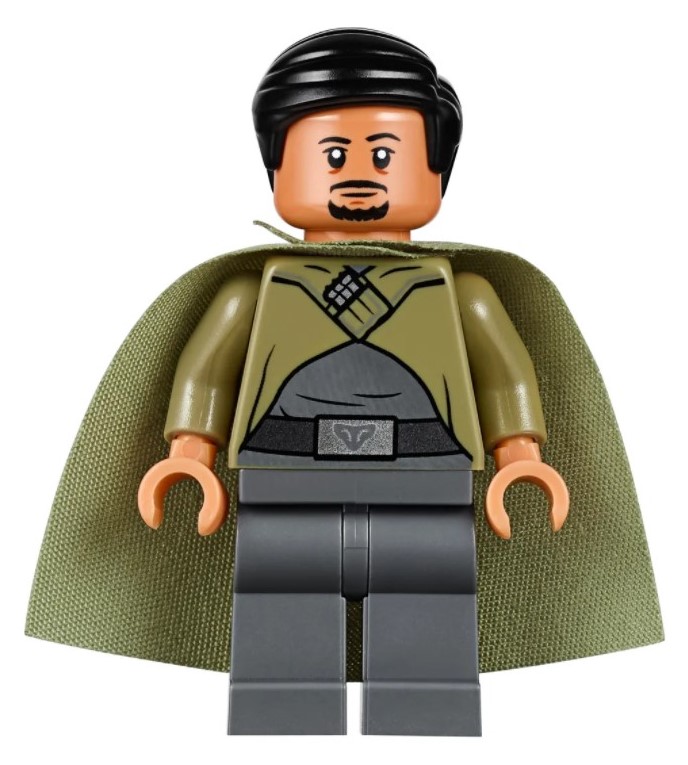 The next figure is Princess Leia Organa. This figure is brilliant. She comes with both a printed skirt piece and white legs, so she can be seated at the table. The skirt piece is a very nice, printed element, both front and back, and continues the motif from the torso. The torso is the same one that we’ve been getting for a while, such as in the 75159 Death Star from 2016. The creases and silver belt match up with her appearance in both “Rogue One” and “A New Hope”. The face prints are accurate to Carrie Fisher, one smiling and one with a stern expression, and the hairpiece captures the look of famous side buns, as seen in the films. The skirt element was exclusive to this set, however it is now in the 2021 X-wing starfighter. A very collectable figure but is no longer exclusive to the set. 8/10 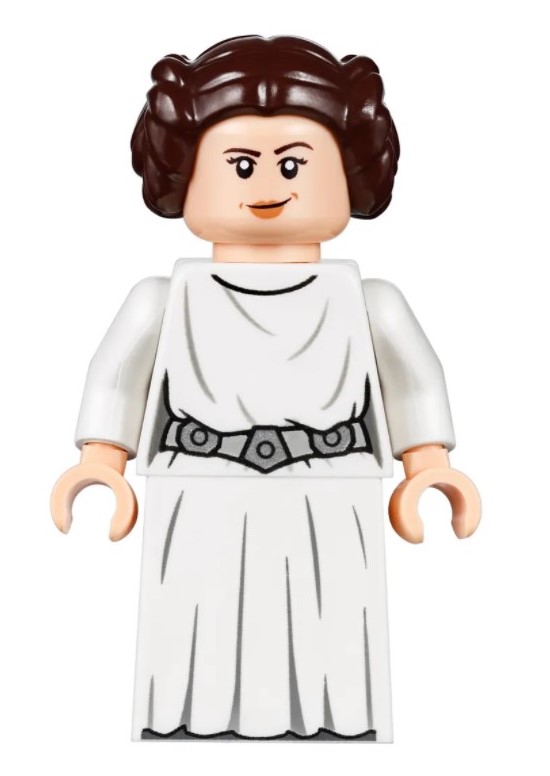 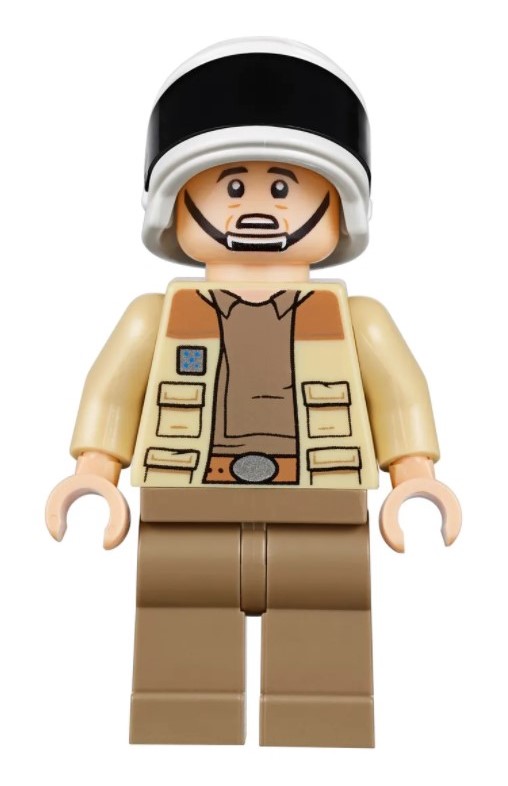 This is the second minifigure of Captain Antilles, the first appeared in the 2009 Tantive IV. This version is a huge upgrade compared to the 2009 figure and just shows how far LEGO has come in terms of minifigure detail in 10 years. The torso print shows his Rebel captain flight jacket and his rank insignia above his right hand pocket (left as you look at the picture). The head prints are both good fits for the character, Happy and Scared. The helmet mould has remained the same since 2009 and still holds up to this day. My only complaint would be the lack of leg detail, maybe some dual-moulded legs could be used to represent his boots. Again, a very desirable figure for collectors as he has quite a large role in the Saga and is exclusive to this set. 8/10

The fourth figure is the Rebel fleet trooper. The opening battle between the boarding party of Stormtroopers and the defending Rebels, in “A New Hope” is a memorable scene, where we first see the Stormtroopers in action. This minifigure, much like Captain Antilles, is the second version of the character. This figure is also much more detailed than its predecessor from 2009. The 2009 rebel battle pack 7668, was one of my first Star Wars sets so I’m glad to see that this particular figure has been updated. Similarly to Captain Antilles, I would prefer if this figure had dual-moulded legs to add more detail. Very nice update to a distinctive minifigure, and as he isn’t exclusive, you can get more relatively cheaply and have a full crew aboard the set. 8/10 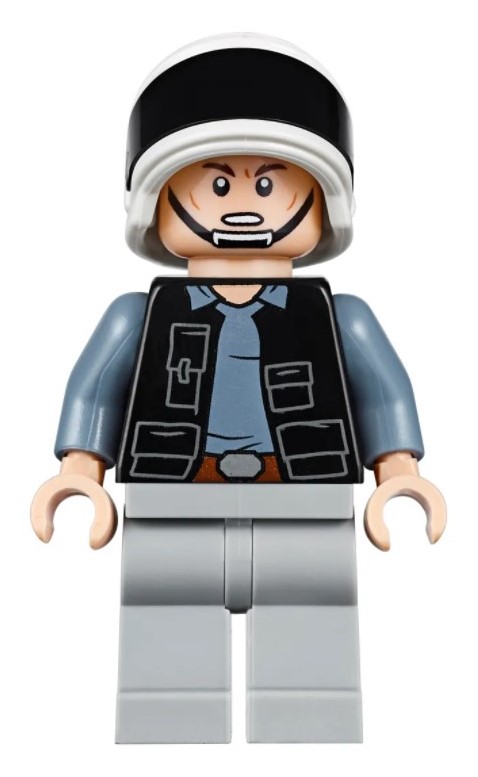 Finally for the minifigures we have the dynamic droid duo, R2-D2 and C-3PO. These are the same figures we have had for a few years now, but they are probably one of the most recognisable pairs of characters in sci-fi history. R2-D2, as usual has the specially moulded legs and 360o head print, with the body printing on a single side. C-3PO has printed eyes, which were introduced in 2012. The fact that LEGO has used the same design for over 5 years just goes to show how accurate they are when designing the minifigures. 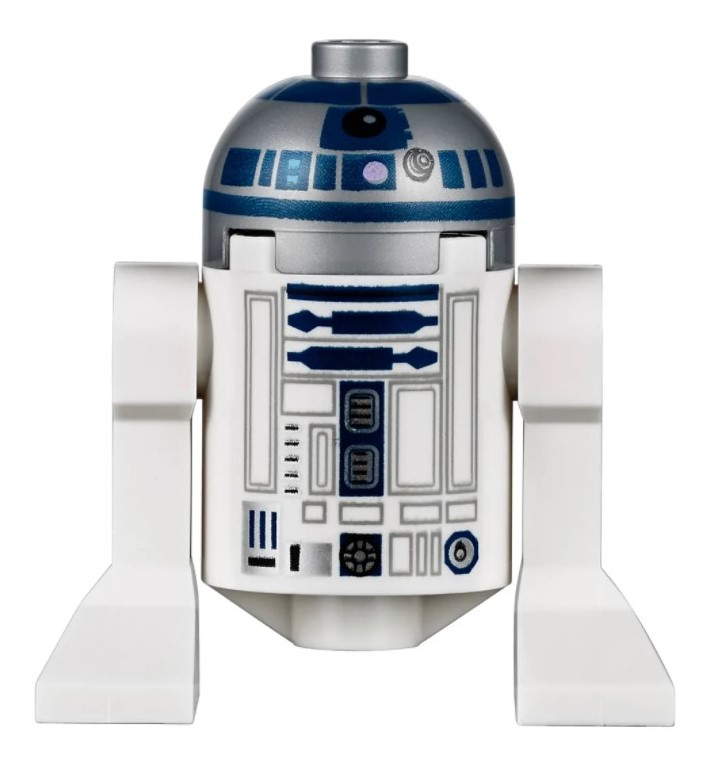 The prints on both are executed very well and the level of detailing is remarkable too. The individual wires on C-3PO and Astromech details on R2-D2 are intricately designed and make the figures instantly recognisable. The only improvement which I can think of would be a dual-moulded Gold and Silver leg for C-3PO as the printing on his right hand leg only goes to the shin, when in the film it’s his whole lower leg. These figures are great, but they are in a lot of sets, so they aren’t too collectable. 7/10 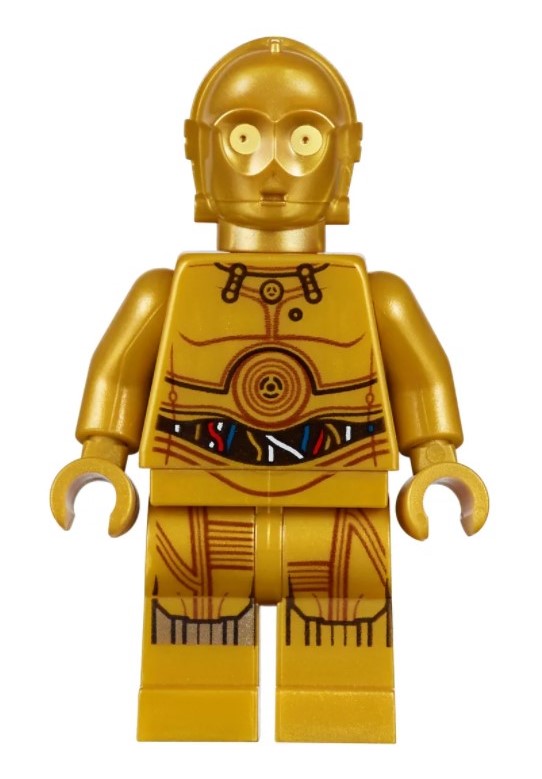 Now that I have covered the figures, I will cover the build. The set has quite a few fun features and is highly detailed. The cockpit section has space inside for 2 pilots which you can access by removing the top half of the section. The cockpit then leads to the main body of the ship which has a pair of defense turrets on both the top and bottom of the ship, the top is equipped with stud shooters for playability. The main area has a detachable roof so you can access the interior office area. The roof section is nicely greebled on the top and has two pairs of cannons on the left and right of the craft. These are made with ski-poles which is a great part usage and works really well. 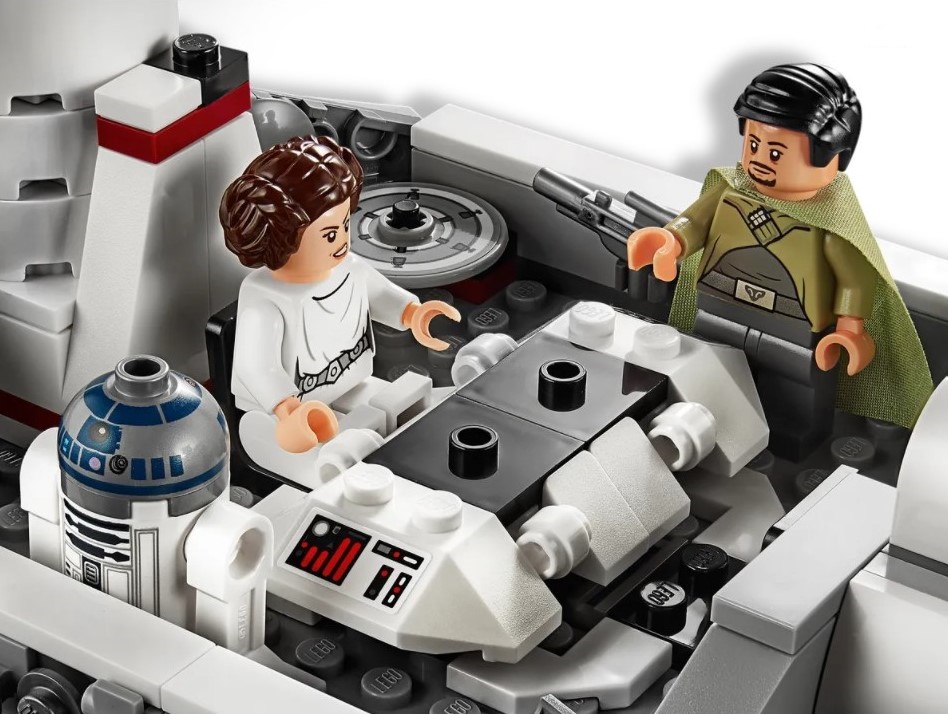 The desk in the office area is designed to be like the one we see in “Revenge of the Sith” despite being on the Tantive IVs predecessor, Tantive III. The table makes sense as it is a senator’s ship and thus requires areas where they can carry out their duties. The sides of this section both have unique greebling details which use parts like the binocular elements or the ingot pieces. I really like the detail they were able to capture with these greebles and the parts work incredibly well. The underside of this section has micro renditions of the escape pods which we see in “A New Hope”.

The next area after this opens up to reveal storage for a pair of spring loaded missiles and is nicely detailed on the exterior. This leads onto the docking ring corridors which are used in this set as escape pods. Whilst not accurate to the film this is a nice play feature, and they do not impact the aesthetics of the build, as you can choose not to detach them, if you want the set purely for display. In the centre of this section there is a radar dish, which doubles up as a handle to carry this set with. This is a great idea as you don’t want to accidentally damage the build by picking it up incorrectly. It also acts as a play feature, as you can pretend it’s flying.

The final section of the ship is the engine portion. There are 11 individual engine pods with fantastic detailing on each of them. The designers have made sure that none of the pods are exactly the same, whilst retaining the same basic structure, the details on each are different, as they are all unique in the film. The use of the paint roller elements on them is another great way to get detailing through unconventional means. 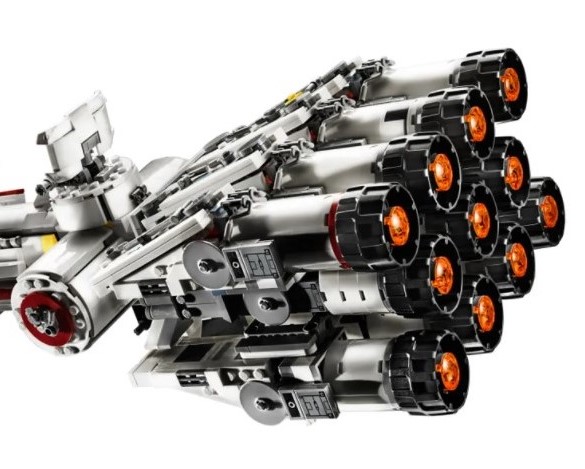 The amount of minifigure accessories that are used to create detail is a stark contrast to the relatively basic 2009 design. The last thing to mention about the build are the spring-loaded shooters located under the cockpit. Spring loaded shooters and stud shooters are quite divisive in LEGO sets, especially ones that are considered to be made for older fans, but fortunately if you don’t like them or want them on the ship, for display, they are easily removable so there is no issue with them being detrimental to the set.

The design is faithful to the in-universe appearance of the ship, in particular, the cockpit shaping is a huge improvement from the 2009 version. The 2019 cockpit is constructed with the relatively new element first introduced in the 75192 UCS Millennium Falcon, but now in white. However, the set relies on stickers for some key details such as the cockpit windows and red stripes, and some engine detailing on the back section. The interior also has a pair of stickers on either end of the table. The stickers add detail to the set, which is great, but many people prefer print to stickers. 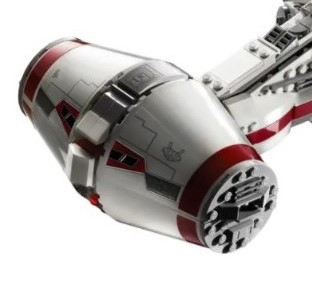 Personally, I would’ve preferred a printed cockpit rather than stickers, but I understand that the cost element of the set prevents this, similar to the figures, the added detail through printing and dual-moulded elements would have increased the price quite significantly. The stickers are good and quite easy to apply, I would recommend tweezers to get the sticker perfectly aligned with the bricks. Overall, I’d give the set an 8/10, the minifigure selection is perfect and the build process is very enjoyable. The only negative would be the reliance on stickers.

To conclude, I’d recommend LEGO 75244 Tantive IV set to anyone who is a Star Wars fan as it is a superb recreation of the ship and it looks great on display.