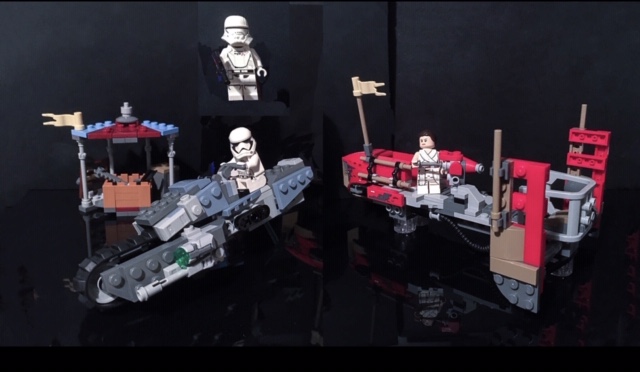 On a desperate mission to save the galaxy from the Final Order, Rey, Finn, Poe, Chewie, C-3PO and BB-8 journey to Pasaana in search of a mysterious Sith Wayfinder. Unfortunately, the motley crew are quickly identified by the First Order. Fleeing for their lives, the resistance fighters commandeer a pair of old speeder transports to flee the scene. However, escape wouldn’t prove so easy as jet troopers pursued the agitators across the desert plains. In late 2019, LEGO released their first wave of Rise of Skywalker merchandise. The LEGO set 75250, Pasaana Speeder Chase, was an instant hit among Star Wars fans. In this review, I’ll examine the quality of the set and identify the minifigures and vehicles that arguable should have been included.

Firstly, let us begin by looking at the three LEGO minifigures included in set 75250. On the far left we have a First Order Jet trooper. That’s right, ‘they fly now’! The minifigure looks pretty accurate to the troopers on screen appearance. The LEGO designer deserves a lot of credit for capturing so many small and intricate details in the new helmet mould. The minifigure is also exclusive to the set. 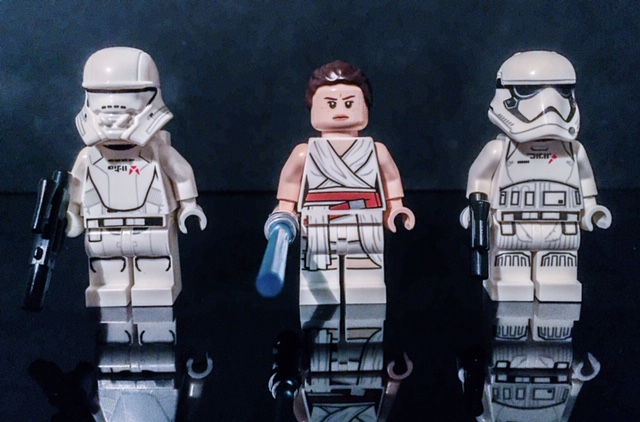 In the centre we have Rey in her white robe. It’s a shame LEGO couldn’t find money in the budget for arm printing. Rey has a brown leather bandage on her right arm, covering a wound she received in the Last Jedi. The extra printing would have made this minifigure spectacular. Still, it looks awesome. When the set was first released, this variant of Rey was exclusive to the set. However, the minifigure has since appeared in set 75284

, the Knights of Ren Transport Ship.

Finally, the set comes with a First Order Speeder Driver. This is a weird minifigure. On the one hand, it is accurate to the character in the film and is a must have minifigure if you’re attempting to recreate the Pasaana speeder chase. Yet, the minifigure is also very dull. It looks like a generic First Order Stormtrooper with a red marking on his chest plate. It’s not really the LEGO Group’s fault, I just wish Lucasfilm had come up with a more creative design for the treadspeeder pilot’s uniform.

Last, but not least, the set comes with a BB-8 minifigure. After a little research, I discovered that LEGO updated the 2015 BB-8 design, giving a larger red light on the droid’s photo receptor. Who knew? 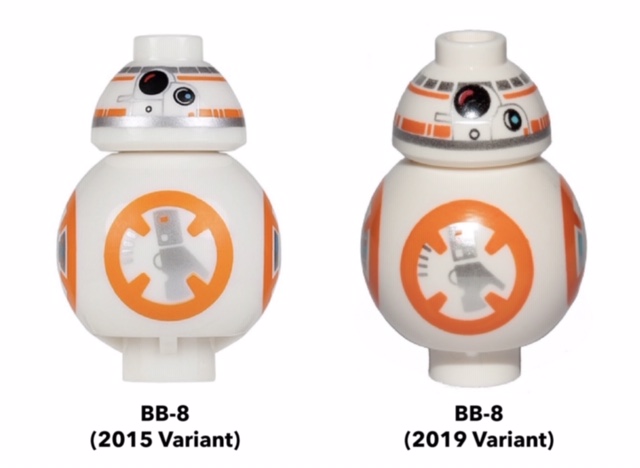 LEGO set 75250 can be separated into three distinct builds; the 125-Z Treadspeeder Bike, an Arunskin 75D Skimmer and a small Aki-Aki tent. I’ll start by taking a look at the First Order Treadspeeder.

The vehicle itself is great to play with. Treads and turning wheels are rarely found in LEGO Star Wars sets so it was a nice treat to see them here. There are stud shooters built into both sides of the speeder making it easy to shoot green laser bolts at Rey and BB-8. Unfortunately, the vehicle is somewhat oversized. I suspect the designers compromised on the vehicle’s size in an attempt to ensure the speeder had a sturdy build for play. 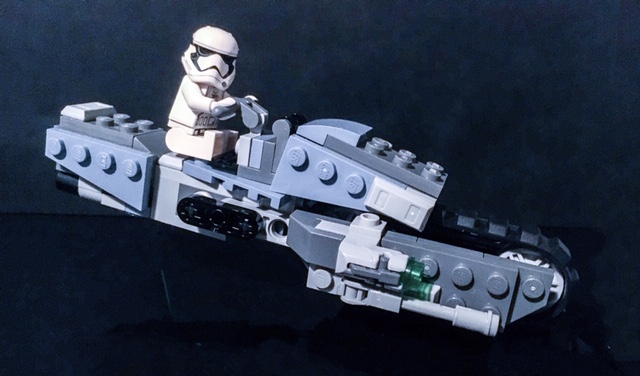 The Aruskin 75D Skimmer is the largest build in the set. I love this build. With the exception of a single stud shooter and a rotatable tiller, the build has no real action features. Instead, the designers allowed the vehicle’s design to speak for itself. It could be branded as a mini UCS build, it’s that good!

If you aren’t a fan of stickers, this may not be the build for you. The front of the vehicle is fairly reliant on stickers to add extra detail. Although the set definitely looks far better with stickers, I suspect it would still look ok without them applied.

Finally, LEGO included a small canopy or marquee style build. Despite being small, I think the build adds a lot to the set. It gives a fixed location that the minifigures can travel to or flee from. 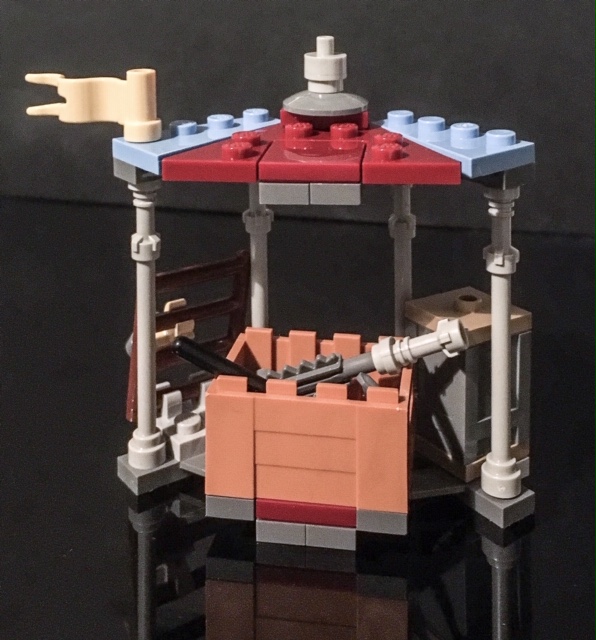 Under the marquee, there’s a crate loaded with accessories. It includes a chainsaw like weapon/tool, a spade and a harpoon piece. 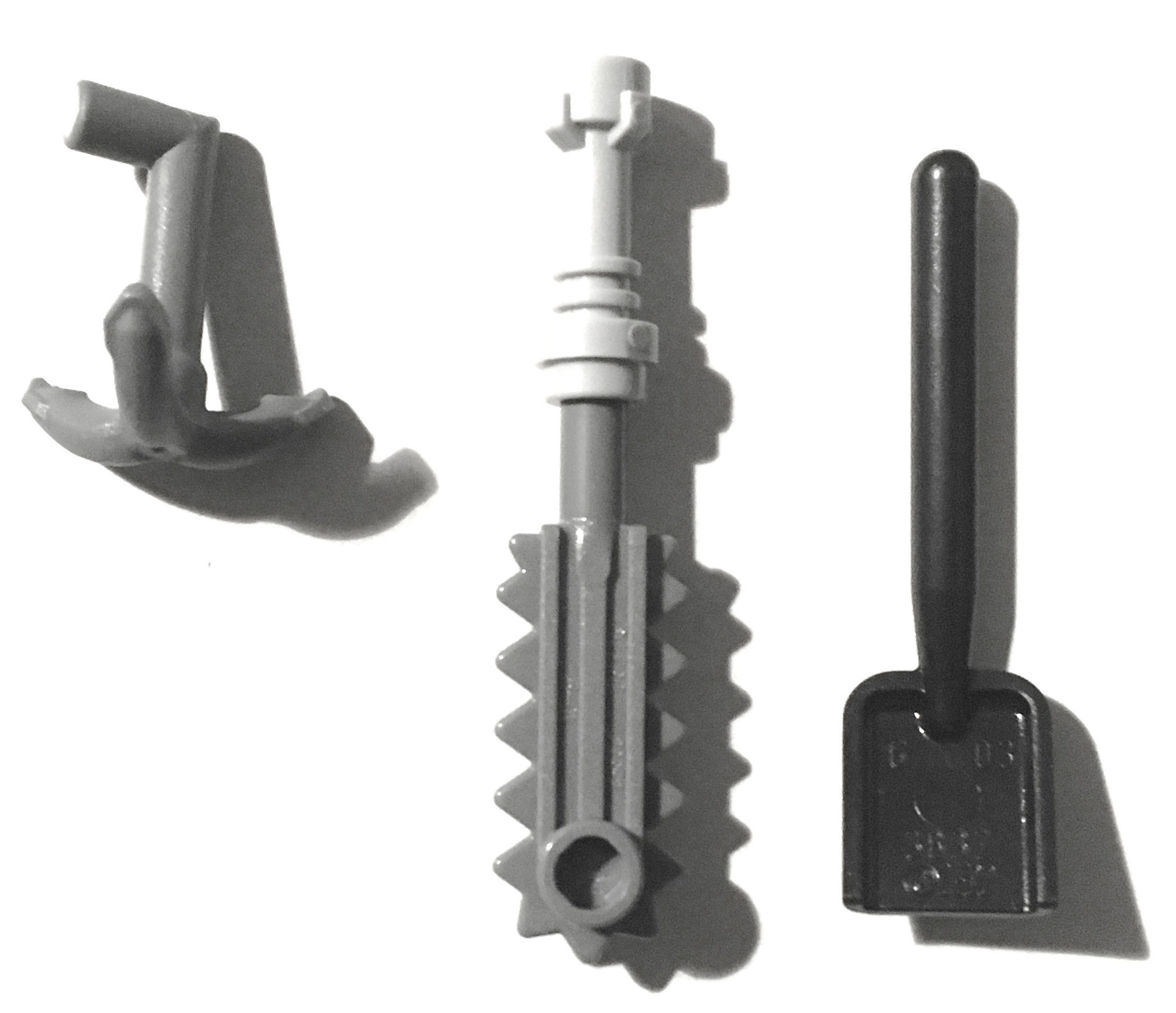 Although the LEGO designers were able to squeeze a lot in to this £45 set, there is a lot missing if you want to recreate the scene on Pasaana. Firstly, Rey and BB-8 escape alongside Finn, Poe, Chewbaca and C-3PO. LEGO tend to disburse desirable minifigures across a range of sets. The cynical part of me thinks they do it to make fans buy complete waves of sets. Whilst the former is probably true, LEGO may also be restricted in how many minifigures they can put in individual sets without having to bump up the price.

Fortunately, it is easy enough to get these minifigures if you want to complete the scene. The Rise of Skywalker versions of Finn, Chewbacca and C3-PO were both included in set 75257 Millennium Falcon

. Poe’s desert attire outfit was included in set 75249, Resistance Y-Wing starfighter. If you want some of these minifigure to complete the scene but are unwilling to buy whole sets consider checking it out FireStar Toys. They sell official LEGO minifigures separately, so you can buy a minifigure without having to fork out on a whole LEGO set. 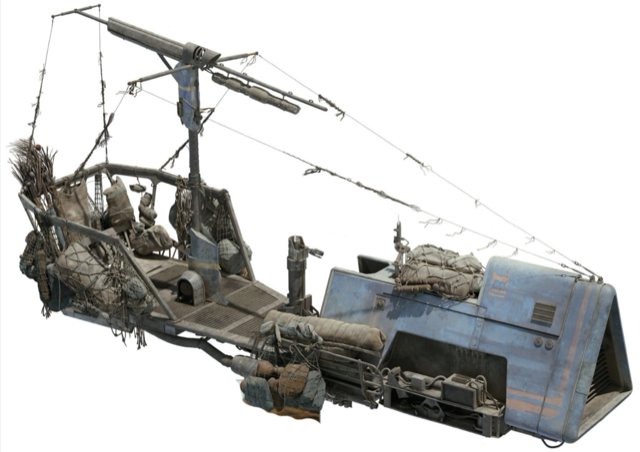 In the scene Poe commandeers a HS-19 Transport Loading Cargo Skimmer. It’s a shame LEGO hasn’t made this vehicle yet. I suspect they designed a model whilst designing the Arunskin 75D Skimmer, but decided against including it to keep the set at a reasonable price. Hopefully we will see a follow up set with this speeder at some point in the not too distant future.

Overall, the 75250 Pasaana Speeder chase is a nice LEGO set that accurately recreates an iconic Star Wars scene. If you’re intending to buy a set for young children, I think there are better sets on the market that offer greater play value. However, if you like what you see, I recommend purchasing the set before it retires. The retail price of £45 is arguably a bit steep for the size of the model. 10-20% off retail price would make the price much more palatable.

What did you think of this article? This was my first set review so I’d love to hear your feedback. I also attempted toy photography for the first time. Let me know if you have ideas for how I could improve my images in the future. I’m always open to suggestions.

Thanks again for reading. If you’re in the mood for more LEGO content may I direct you to Vivid Username’s articles. He’s been slaving away lately; writing article on LEGO Marvel sets for your entertainment. I recently read his article on all the LEGO Marvel sets that were released in 2019. I wholeheartedly recommend you give it a read.

Images in this article were taken from Brickset, LEGO.com and Wookieepedia