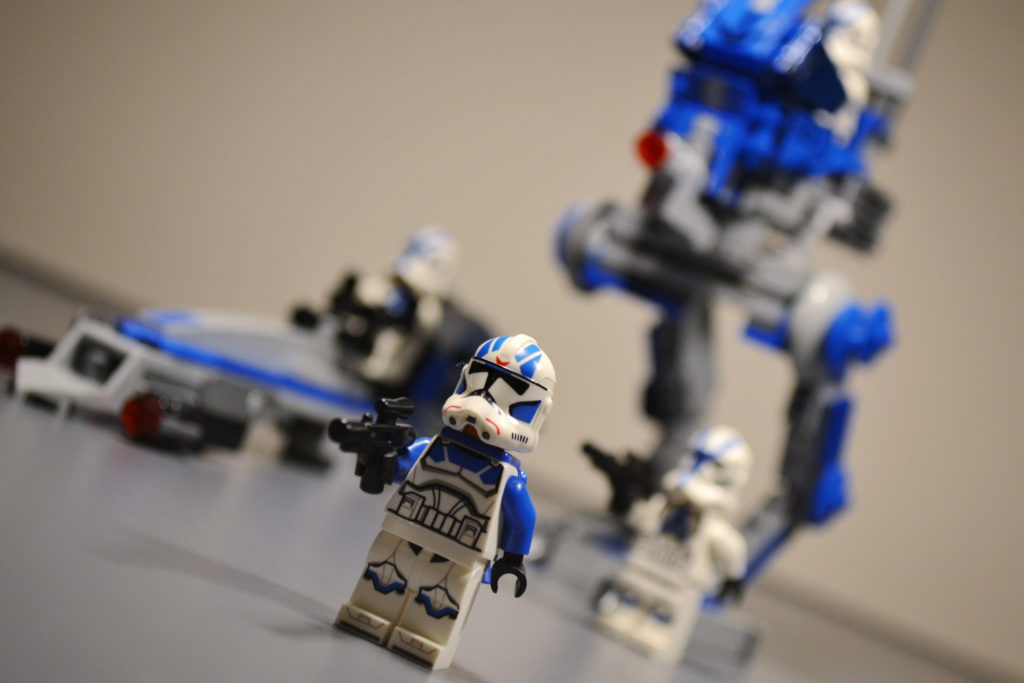 Life is full of missed opportunities, never-weres, should-have-beens and what-ifs. Most LEGO fans have a set they’ve always wanted LEGO to make, or remake, and to LEGO’s credit they have managed to capture the market for fan-submitted ideas to a degree with LEGO IDEAS, LEGO World Builder, and the occasional contest outside of that.

But, as in life, it does not do to dwell on what could have been. Even the fastest LEGO IDEAS projects to achieve 10,000 supporters do not always become real sets, and nor is LEGO able to listen to every single fan campaign for a set or theme.

Not every campaign, but LEGO 75280 501st Legion Clone Troopers is an exception. The most notable exception. This is the tale of a set so in-demand that it sold out within an hour of release, and wasn’t available again for a whole month.

Fans of Star Wars: The Clone Wars and Revenge of the Sith will be familiar with the blue-striped 501st Legion, Anakin Skywalker’s personal clone commandos who join him, his master Obi-Wan and his apprentice Ahsoka on missions across the galaxy. They’re also the clones that help him storm the Jedi Temple and murder the Younglings, but let’s sweep that under the rug.

They’ve appeared in set form before in 2013’s 75002 AT-RT and 75004 Z-95 Headhunter, but we’ve never had a 501st Legion battle pack, which to many seemed odd considering how prominent they are in the Star Wars universe. So odd, in fact, that high profile LEGO YouTubers such as MandR Productions and Solid Brix Studios have discussed or even campaigned for LEGO to turn the dream of a 501st battle pack into a reality. 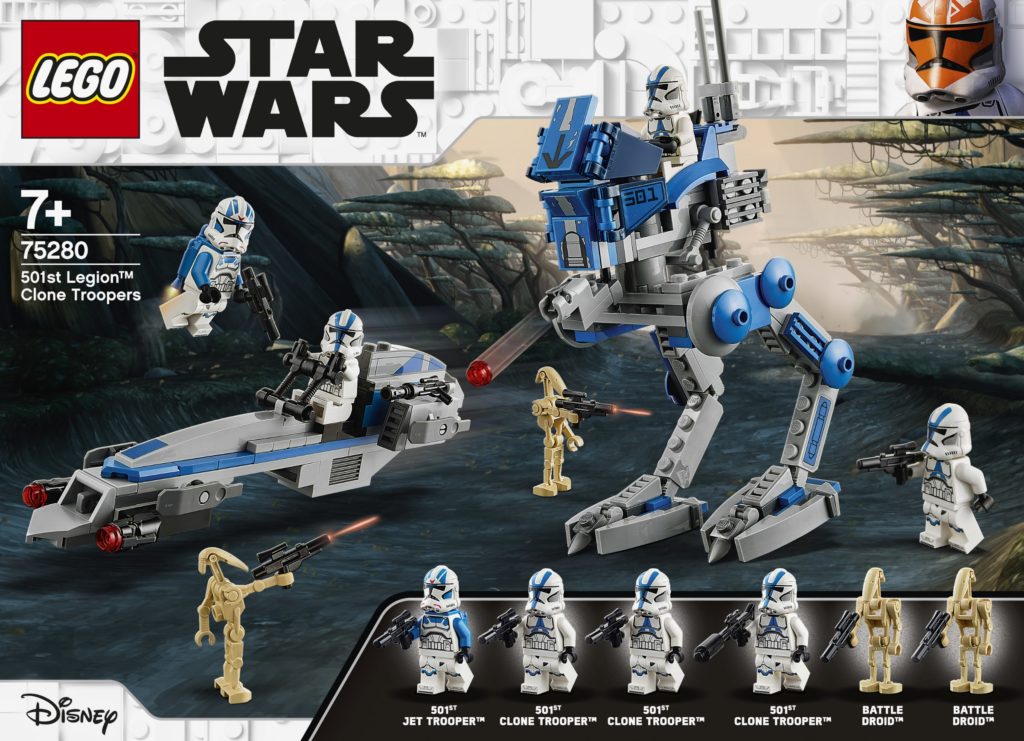 The LEGO Star Wars community rejoiced, and then cried out in despair on August 1st when, as set 75280 appeared on shelves in many territories worldwide, it also left them within hours. LEGO stores, resellers, toy shops, game shops, supermarkets, and everywhere else that stocked them were cleared out moments later.

Clearly this set was more popular than LEGO thought it would be, though unfortunately it does seem that a lot of the people buying this set were purchasing huge quantities to resell online at a much higher price. I actually discussed this with staff at my local LEGO store, who said they were limiting them to one per customer, and not putting them on the shop floor until things had quieted down.

All this for a larger-than average battle pack! Let’s see what the fuss was about.

For nearly twice the price of a “normal” battle pack, one would expect more LEGO minifigures and for them to be of better quality, and 75280 does not disappoint. The set sports four 501st Clone Troopers and two battle droids.

Three of the clones are regular, Phase 2 501st troopers. These feature leg printing, and the black pelvic bar has been replaced by a white one. This gives the clones a much cleaner look, one that definitely justifies the excitement. An entire army of these high quality figures would be a sight to behold. 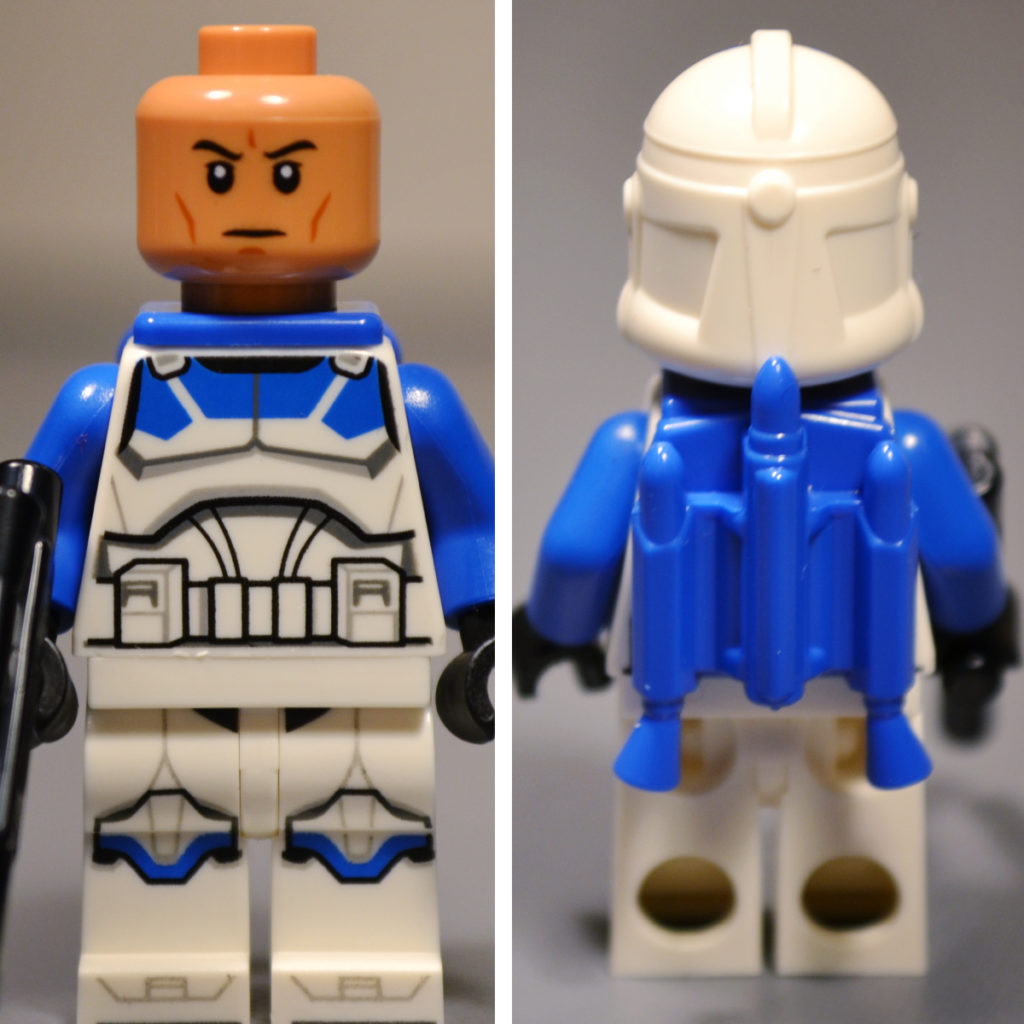 The fourth clone is a slight deviation: this is a Jet Trooper, complete with a blue jetpack, blue arms, and slightly altered torso and helmet patterns. The legs remain the same, but the overall look is striking.

All four clones have finally ditched the “angry clone” face of yore, in favour of a more appropriate skin tone. As clones of Jango Fett, the Clone Troopers are all played and voiced (in the films) by New Zealand actor Temuera Morrison, and the use of nougat to reflect his ethnicity is more respectful than the previous use of the very Caucasian light nougat.

The set also comes with two battle droids. Aside from the updated gun arms introduced in 2007, this design has not been altered since the first The Phantom Menace sets in 1999, because why improve upon perfection? Sure, over time their joints can become a bit loose, but the standard battle droid design is simple and effective, as evidenced by the fact that LEGO are still using it 21 years later. 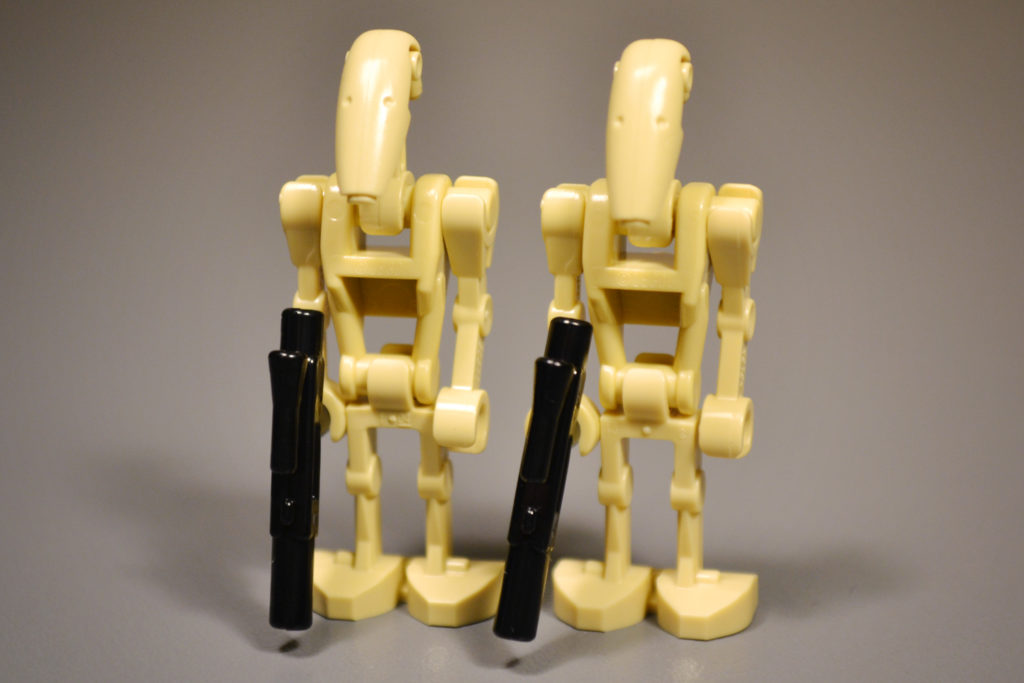 Let’s be honest. For a lot of you, the review could end here, because you’re just buying it for the minifigures. There’s absolutely no shame in that, that’s what battle packs are for, and given just how high the prices are for any of the four clones on the aftermarket, it’s definitely worth just buying multiple copies of the set. The minifigures look fantastic, and for any clone army builders, this will be filling a long-empty void in your collection. The minifigures alone justify the price.

Onto the builds! This set has two vehicles, a BARC speeder and an AT-RT walker. Both are staples of the Clone Wars era of Star Wars and have appeared in set form many times, including in past battle packs. As an initial note, both of them are a little over-sized compared to minifigure scale, the walker in particular towering far higher than it should, but presumably this is also part of LEGO’s attempt to justify a higher price point. It’s simple enough to rebuild either of these vehicles as smaller versions of themselves, and given that most people will buy this set just for the minifigures, this isn’t really a complaint on my part, just a note. 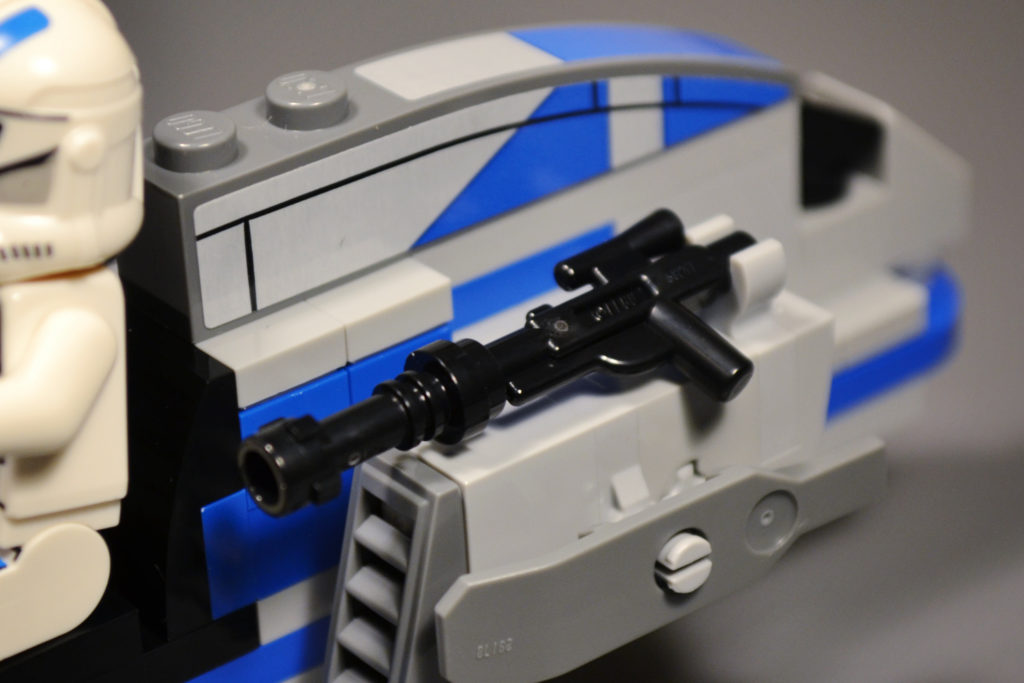 The BARC speeder is looong, but only seats one clone. It has two stud shooters at the front, and space for clones to store two guns around the rear. The build is sleek, using a lot of curves and rounded elements to make as aerodynamic a shape as possible, and there are very few stickers (four in total, used on two individual elements). There’s nothing particular ingenious about the design, but it does the job. 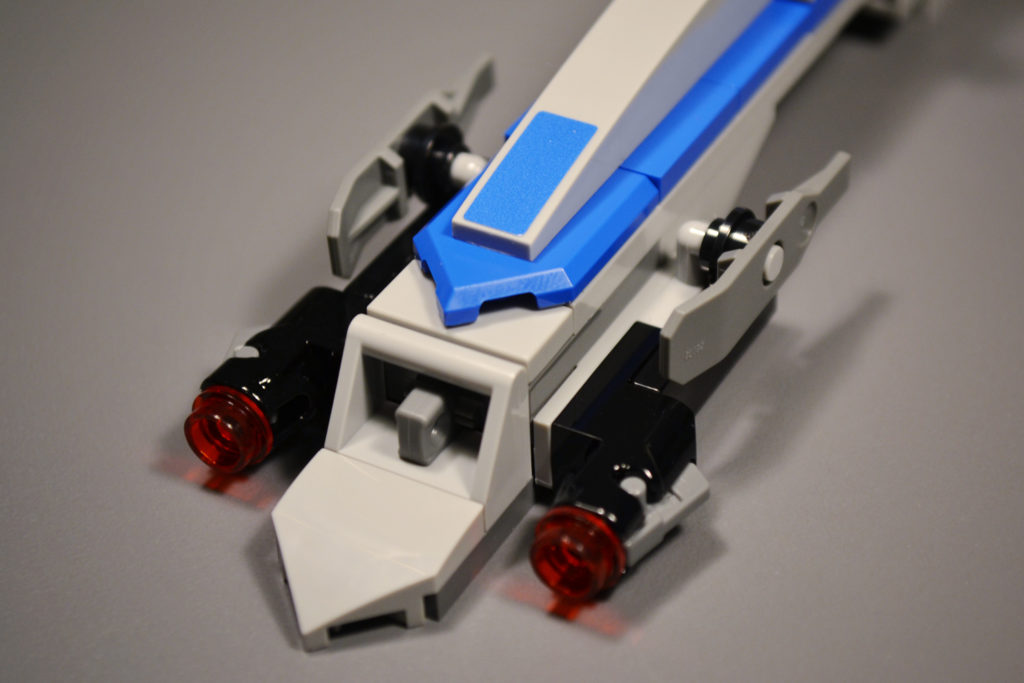 Because of its size, I would say it’s a step down from previous iterations of the BARC speeder, but these pieces can all easily be used to make a smaller model. I would also personally prefer it at this size if it had space to seat another clone, but that would detract from its accuracy to the movie/show. 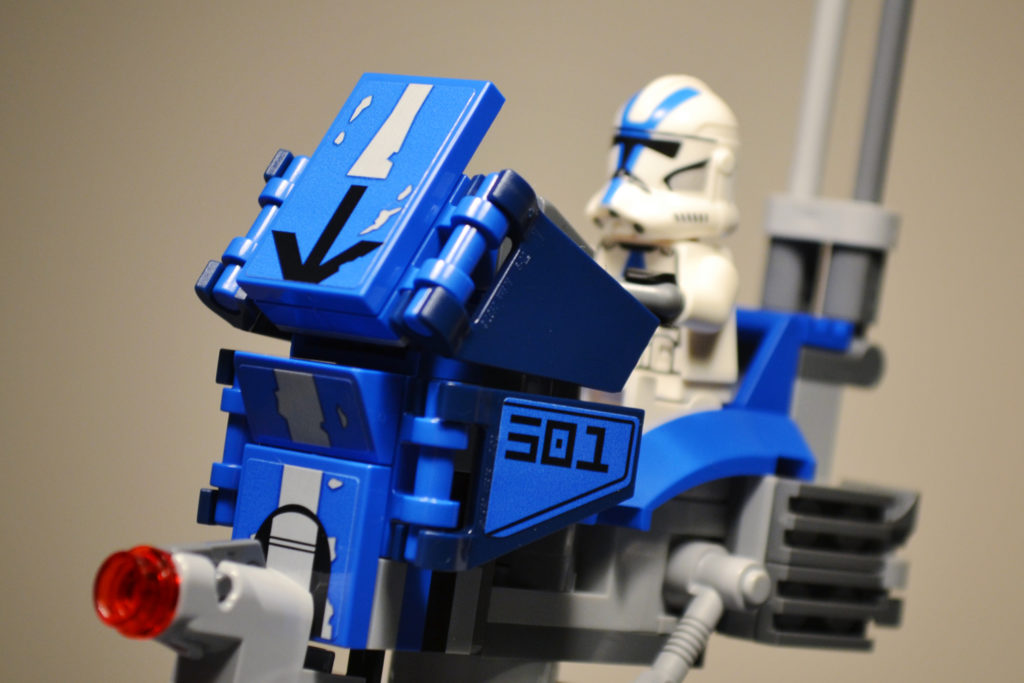 The other build, the AT-RT walker, is a giant compared to its predecessors, especially given that it only seats one clone. That said, the design is excellent, from the detailed shaping on the feet to the use of flags to create the front of the body. There’s one stud shooter that sits on a Mixel joint. Despite the clunkiness of the stud shooter design, I actually think that it works well for the build. However if you’re still not a fan, it’s an easy fix to change this into another type of blaster. 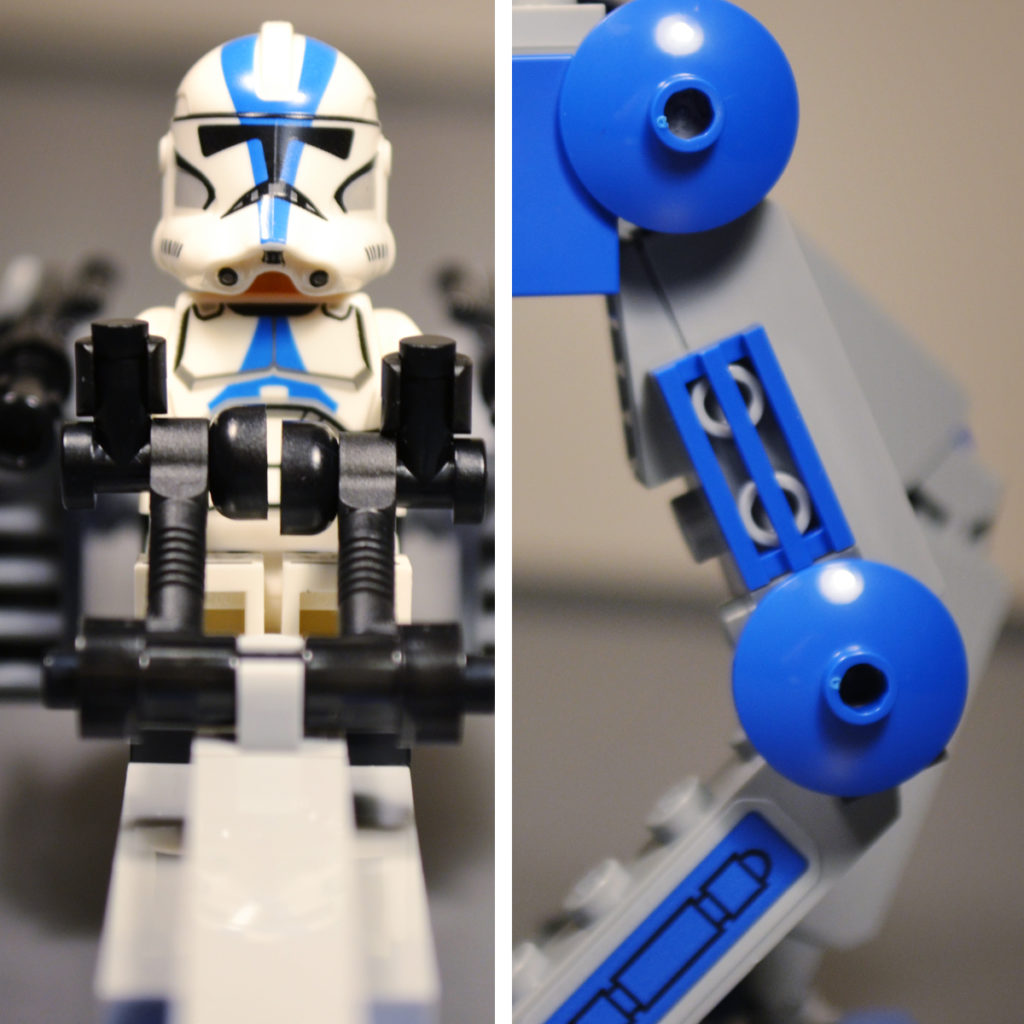 There are more stickers on the walker than the speeder, but I think they add detail to what would otherwise be some quite plain areas, like the lower legs and the upper-front of the body. Despite its size it’s still a very compact build, and any area not packed with detail would have stood out, so the stickers are (for me) quite welcome here.

As with the speeder, I suspect many builders will want to rebuild this walker into a much smaller one, because it is far too tall to fit in with a pre-existing clone army.

Honestly, just the fact that this LEGO set 75280 exists is a strange triumph. I have heard voices from across the LEGO community clamouring for this for so long that the lack of it became normality. That said, I’m really happy for the dedicated fans who wanted this for so long, that they’re now able to get their hands on the missing piece in their Clone Wars collection. The 501st Legion are much beloved by the fanbase, and now builders have the chance to put them alongside the Kashyyk, Utapau and other troopers we’ve already had in battle pack form. 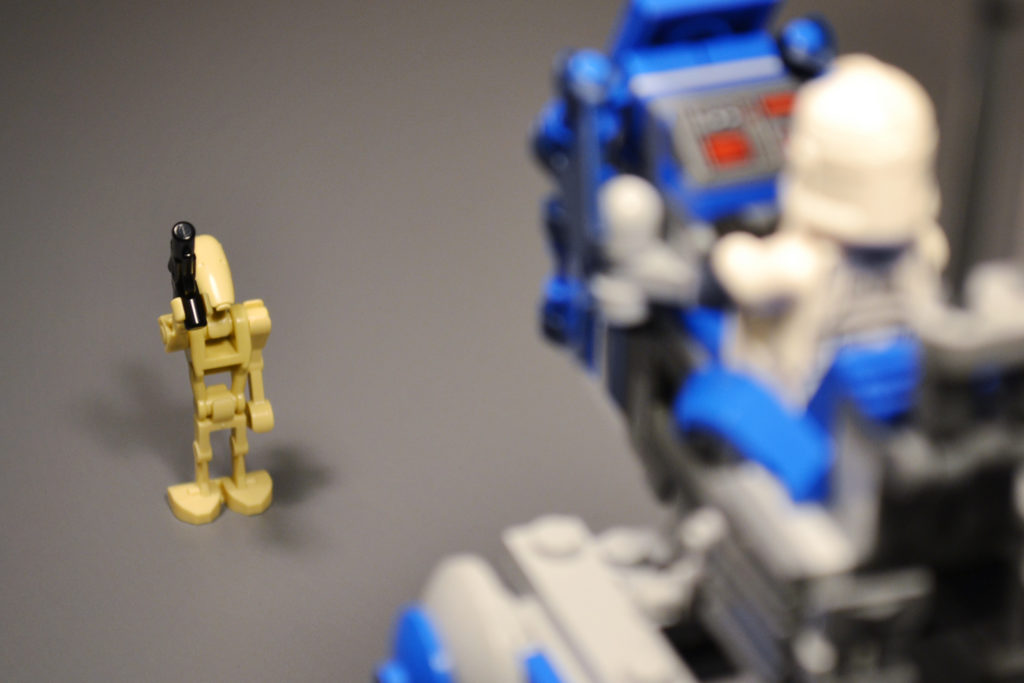 That said, if you want to get your hands on this, you may not be in luck. As I mentioned before, the crazy popularity of this set has led to stores either putting restrictions on how many sets a person can buy, or having eBay scalpers clean out their stock. Grab it when you see it, and hopefully LEGO will keep this set on shelves for as long as they can.

At £24.99 / $29.99 / €29.23, 75280 is more expensive than a standard LEGO battle pack, but you do get larger builds, and more minifigures (from both sides of the conflict). To me, this higher price point is justified, and I would definitely recommend this set to any and every LEGO Star Wars fan.

Get all latest content delivered to your email a few times a month. Updates and news about all categories will send to you.