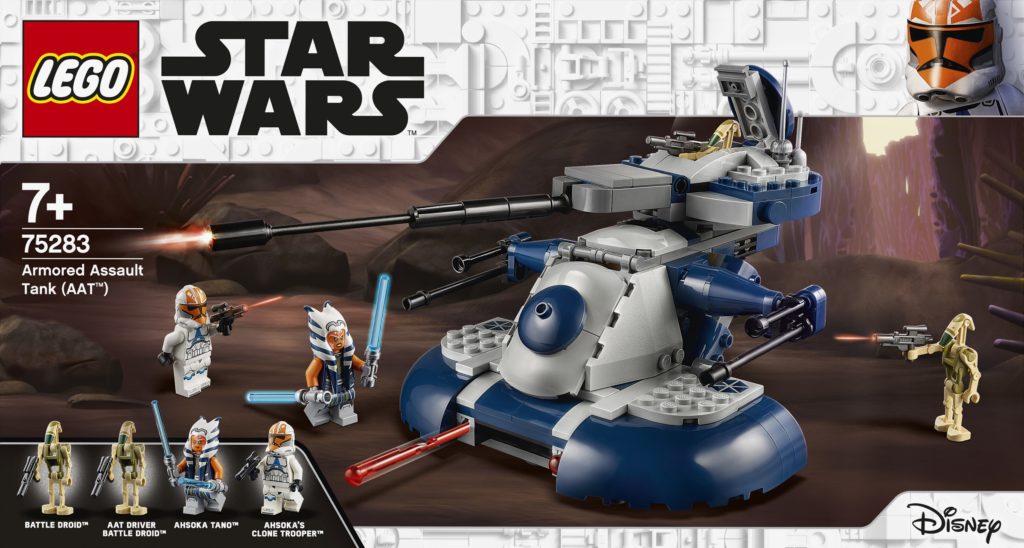 It was inevitable that, with the revival of the Star Wars: The Clone Wars animated series in 2020, LEGO fans would speculate as to whether any sets based on the new season would be released, and whether it would include a new Ahsoka Tano minifigure. Our first indication that maybe we would receive new sets was the announcement of 75280 501st Legion Clone Troopers, but we didn’t have to wait long for a more conclusive answer as LEGO 75283 Armored Assault Tank was leaked shortly afterwards. It then threatened to be as crazily popular as 75280, but why? We’ve had many AATs in LEGO form before – what makes this one so special?

The AAT is a tank used by the Separatist forces and their battle droid army in their neverending war against the Republic. The first LEGO version of this vehicle was actually released shortly after The Phantom Menace hit cinemas in 1999, in the 2000 wave of Star Wars sets, and the strange, circular front of the tank makes it hard to build out of LEGO without including specific, prefabricated elements. LEGO have made this tank a total of 9 times, and almost all of them use huge curved elements to get the front right. The first iteration is still arguably the best-looking.

So what makes this set so popular? Well, I mentioned Ahsoka Tano before. Anakin Skywalker’s former apprentice was one of the main characters of Star Wars: The Clone Wars, but though an adult version of her appeared in Star Wars: Rebels sets a few years later, the only Clone Wars era minifigures of her had that strange, big-eyed, bloated printing that all The Clone Wars characters had at the time. Essentially, before 75283 we had never had a good, accurate, standardised LEGO minifigure of Ahsoka Tano aside from the prohibitively expensive adult iteration from Rebels. We were due an update, and her presence in this set alone would have made it stupidly popular.

But wait, there’s more! In this final season of The Clone Wars, Ahsoka is accompanied onto the battlefield of the planet Mandalore by members of the 501st clone legion who had painted their helmets in her likeness out of respect. 75283 is the only LEGO set (so far) in which they appear, so the attractiveness of the set is magnified even further. LEGO knew exactly what they were doing here.

Let’s break them down. 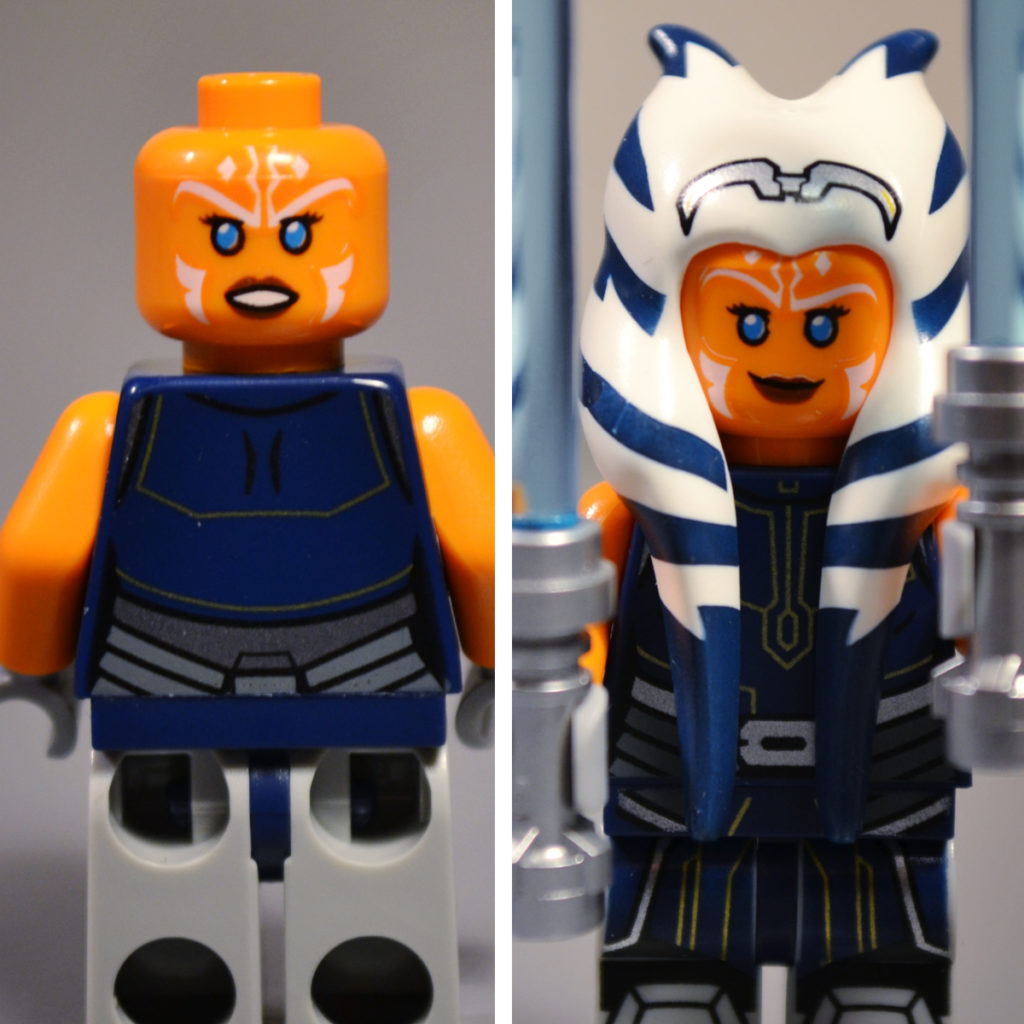 The Ahsoka Tano minifigure in the set is plain stunning. She has a dual-sided face, leg printing and a dual-sided torso, and the level of detail is excellent. One expression is a slight smile and a raised eyebrow, a common expression seen on her in the show, while the reverse shows a concerned or focused (but not angry) Ahsoka that is perhaps intended for when she is in battle.

She also has a montral headpiece, the patterned white tentacles that the Togruta species is known for. There is more printing here, showing her signature dark blue strikes and a small silver circlet, and it is excellently designed. 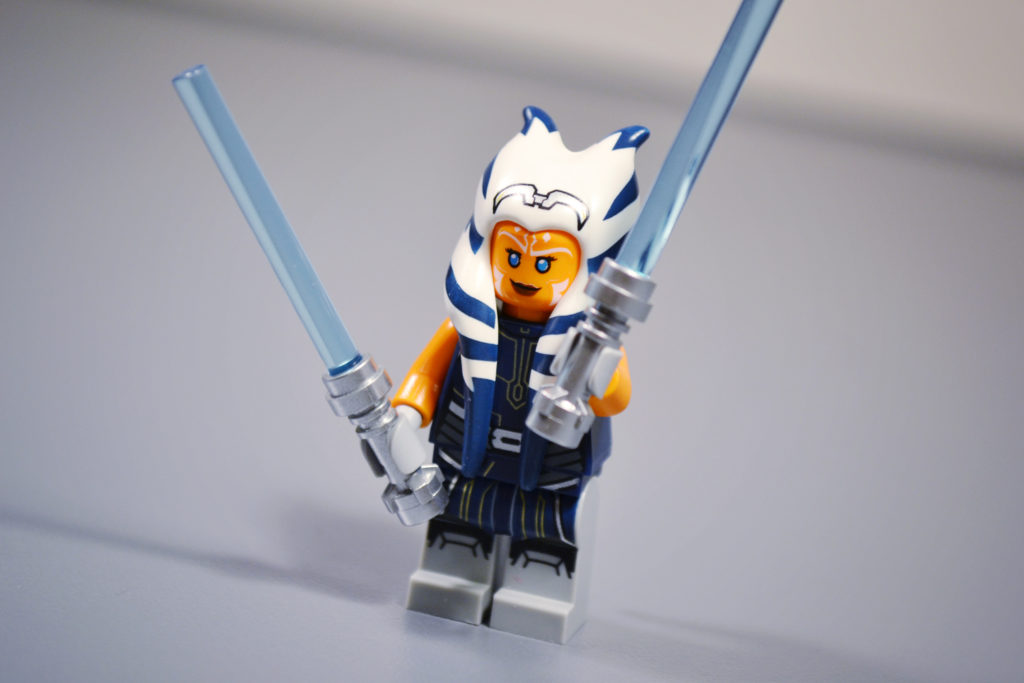 This dark blue outfit is significantly different from the brown and dark red one we have had in minifigure form before, intended to depict her outfit from the Siege of Mandalore, the focus of the final arc of the season, and it’s a great likeness. It also fits perfectly with the release of 75280 501st Legion Clone Troopers, who Ahsoka leads into battle in these episodes. 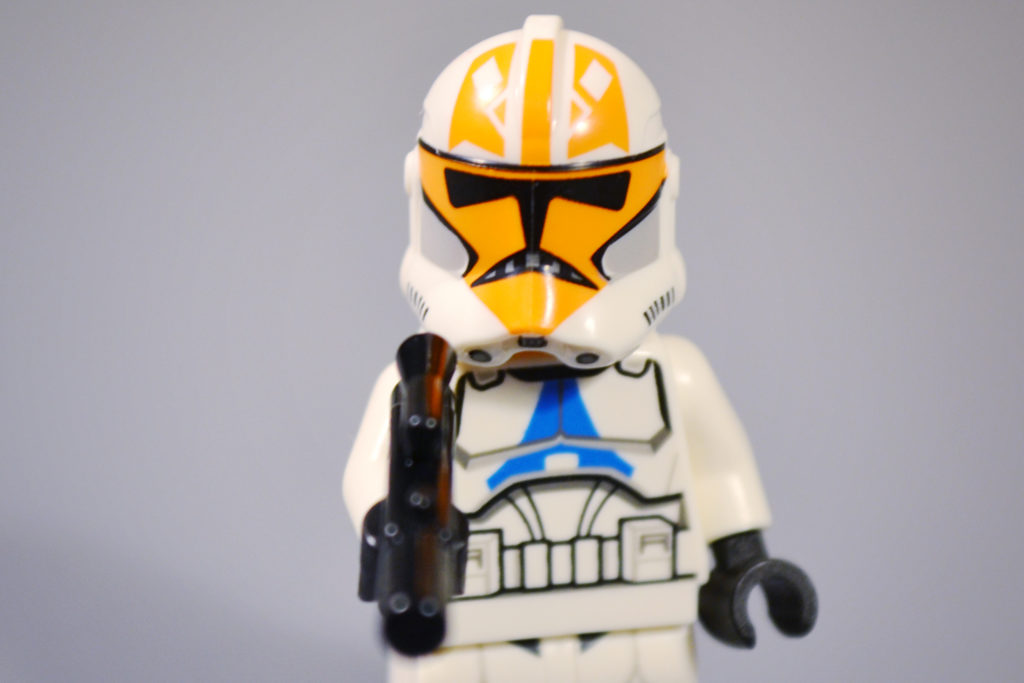 The clone trooper included in this set is from the 332nd Company, the specific infantry class within the 501st Legion that Ashoka takes to Mandalore. The minifigure is mostly the same as the three standard 501st clones in 75280, but with the notable difference of the amazing orange pattern on the helmet. As mentioned before, the clones in the 332nd company paint their helmets in the pattern of Ahsoka’s tattoos as a mark of respect, and a delightful addition to this set. I definitely want to get my hands on more. 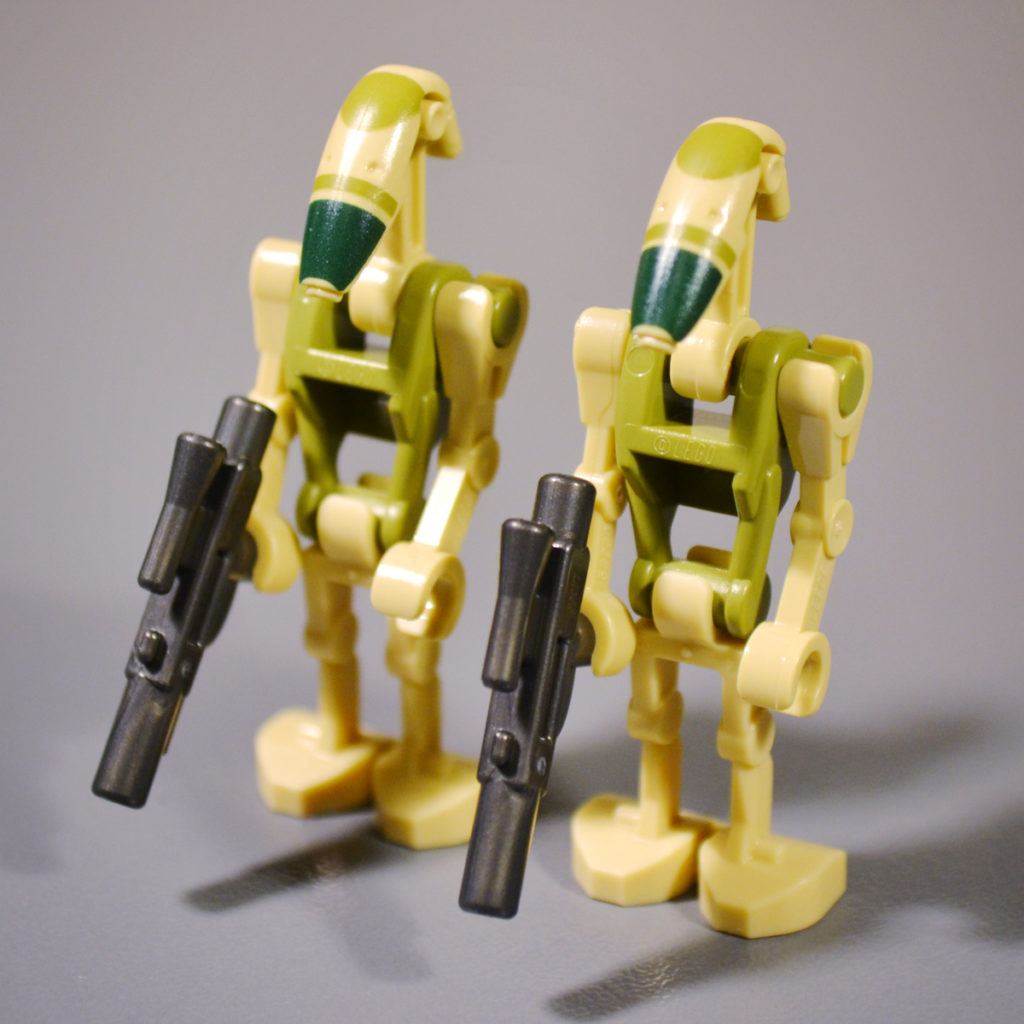 As mentioned in my other review, the new clones have finally ditched the “angry clone” face of yore, in favour of a more appropriate skin tone. As clones of Jango Fett, the Clone Troopers are all played and voiced (in the films) by New Zealand actor Temuera Morrison, and the use of nougat to reflect his ethnicity is more respectful than the previous use of the very Caucasian light nougat.

You might think it would be hardly worth mentioning the two battle droids in the set, given that they’re built the same way they have been since 2007, but these are slightly different. The olive bodies and olive and dark green stripes on their heads signify them as Kashyyyk battle droids, camouflaged for the forest homeworld of the Wookiees. This combined with the fact that their guns are in pearl dark grey makes them just interesting enough to be worthy of note. Even if you have an army of standard battle droids, I think you will be happy to add these two “clankers” to your collection.

As I have previously stated, this tank is not new to LEGO. Not even close. We’ve had this AAT 9 different times, though this newest iteration is one of the best. While I feel that it looks better in the tan used in the first version of the set, it works well in dark blue, and will fit in with many other previously-released droid army vehicles. However, for casual or new builders, the fact that the tank and Ahsoka’s outfit are both dark blue yet not on the same side may be confusing. 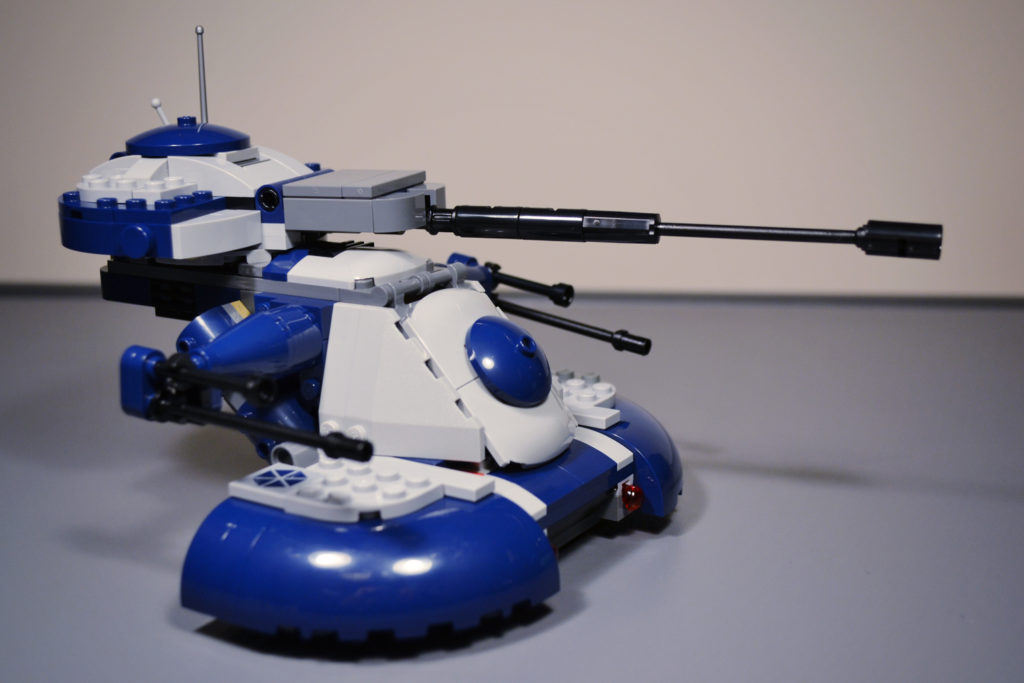 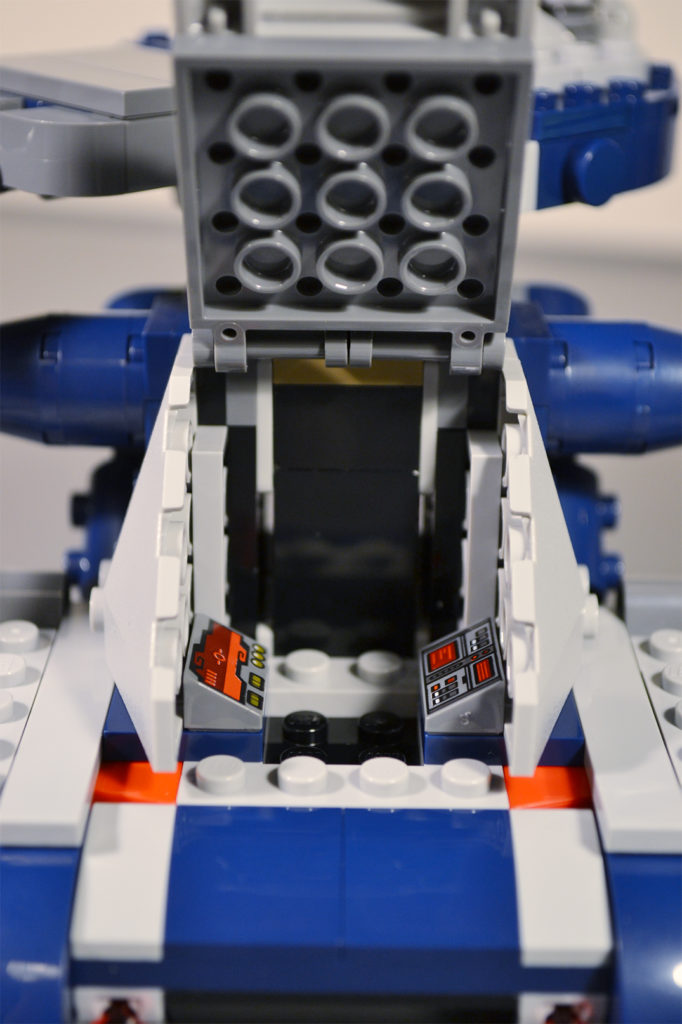 The tank’s base achieves its rounded shape with two large curved elements, but leaves space on the front for two very subtle missile launchers. If you press these on the back of the tank, they will fly out of the front. There is also a small, hidden cockpit large enough for a single minifigure. Unfortunately there’s no way to connect a battle droid inside, so they sit very loosely and will fall out of position if you move the tank while they are inside. 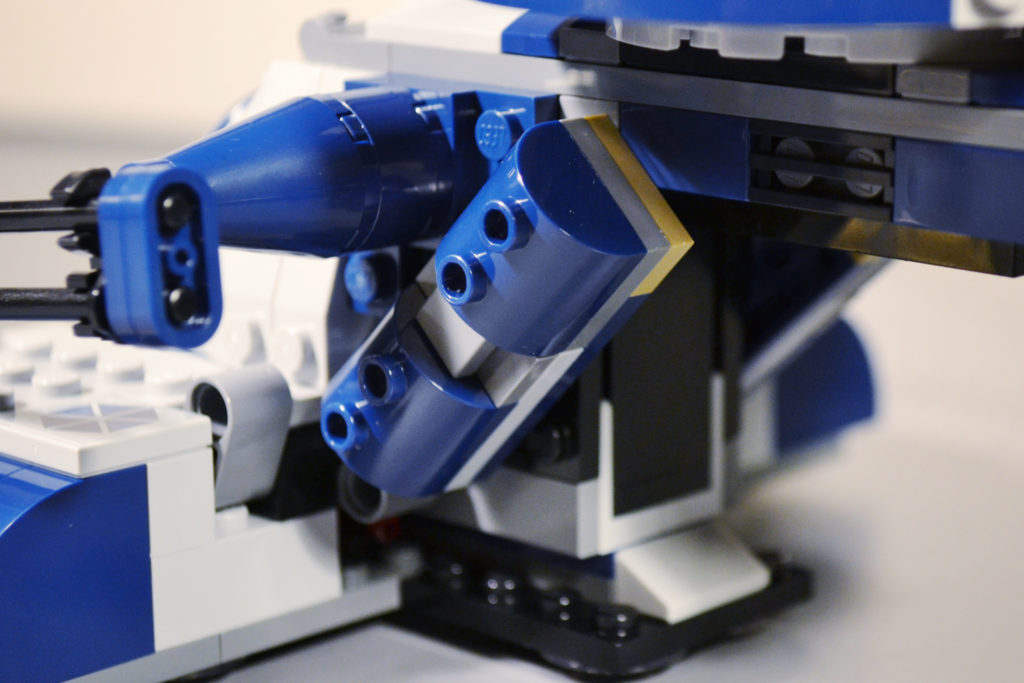 The sides of the cockpit have more guns, though these don’t feature any play functions. The guns themselves are an array of antennae, and they are connected by larger conical elements usually seen on castle roofs. This kind of parts recycling – finding innovative uses for elements in places you might not think of – is golden, and we will see more of it later in the build.

Moving up, the central cannon and its base actually sit on a 4×4 circular panel that lets it rotate freely without falling off. This means the cannon can do a complete 360 degree spin, aiming at enemies in front and behind. The cannon itself is just a series of Technic axle connectors and another antenna, but it works well and it doesn’t droop down despite its length. It is a little bit long, but that’s easy for any builder to modify. 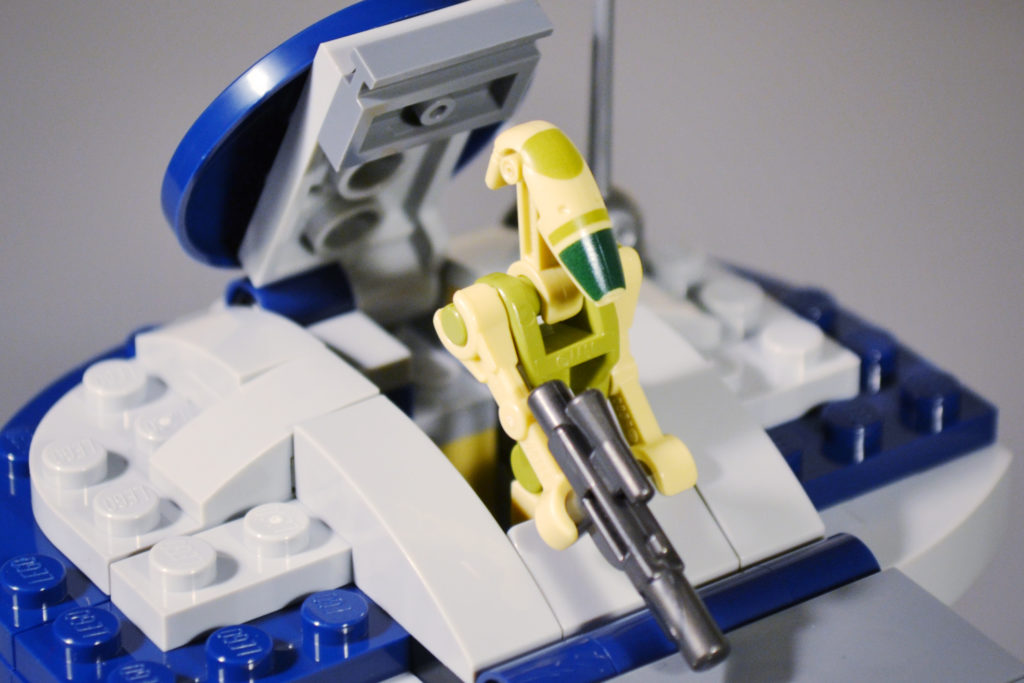 There is a secondary cockpit on the gun turret, with space for a single minifigure and a lifting lid. Again, a battle droid will rattle around, but it’s good for posing for photography or larger MOC displays. There are two tiny antennae next to the hatch, and one of them is actually a recycled rapier element first seen on the Collectible Minifigures Conquistador. I like this reuse of the element, and think it adds a tiny bit of necessary detail to the build.

Overall, despite its colour scheme and what’s come before, I think this version of the AAT is actually very good, making the best use of 2020’s parts catalogue. 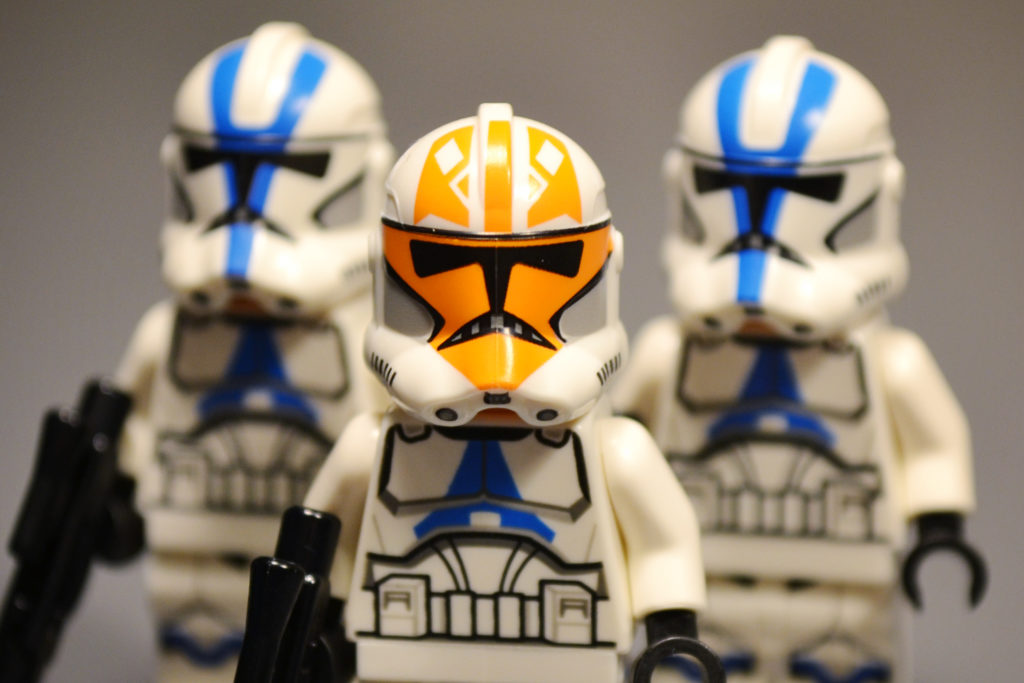 , as for the same price you will then have the tank and battle droids as well.

This also makes a very nice companion set to 75280 501st Legion Clone Troopers. Between the two sets you have a number of clone troopers and battle droids, vehicles for both sides, and of course The Clone Wars’ true protagonist Ahsoka Tano. If you’re new to LEGO Star Wars, these two sets will give you a great jumping-off point in creating armies or a display. For seasoned collectors, they present a great opportunity to bolster the ranks of both sides.

I would highly recommend biting the bullet of the price and getting this set, and I hope this isn’t the last we’ve seen of The Clone Wars from LEGO.

Which LEGO Star Wars Busts and Mosaics Could We See Next?