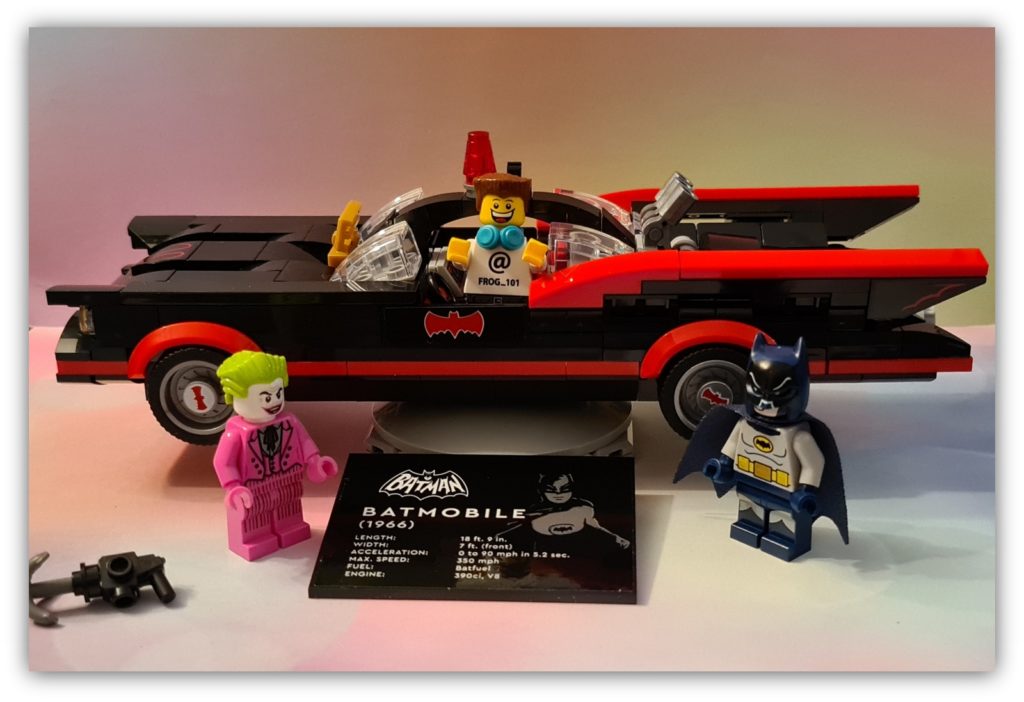 Nana-nana-nana-nana-BATMAN! One TV show that I always enjoyed watching was the Batman TV series, starring Adam West and Burt Ward. I didn’t realise that I was in fact watching repeats as the actual series ran from 1966 to 1968; but that didn’t bother me, the programmes were full of excitement, action, and fun. Not really being into “classic” comics when I started watching the TV series (I was about eight years old when I started watching them around 1976!)  I had no idea that there was a comic version of Batman since 1939. Anyway, I’ll write a little more about the TV show throughout this article, but what we will do is have a look at the LEGO set 76188 and the build.  Oh, and all the titles will be in the spirit of Robin infamous catchphrase! 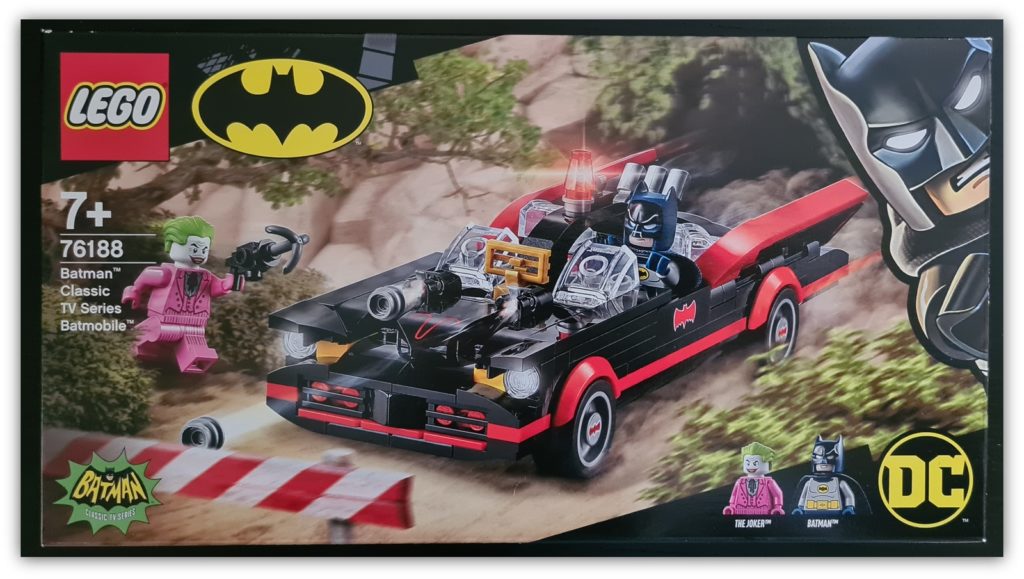 According to LEGO, 76188 comprises 345 pieces. At £34.99 the calculation for the price per part is one of the easier to work out.  I was pleasantly surprised that on opening the box that the parts had been subdivided into three bags. 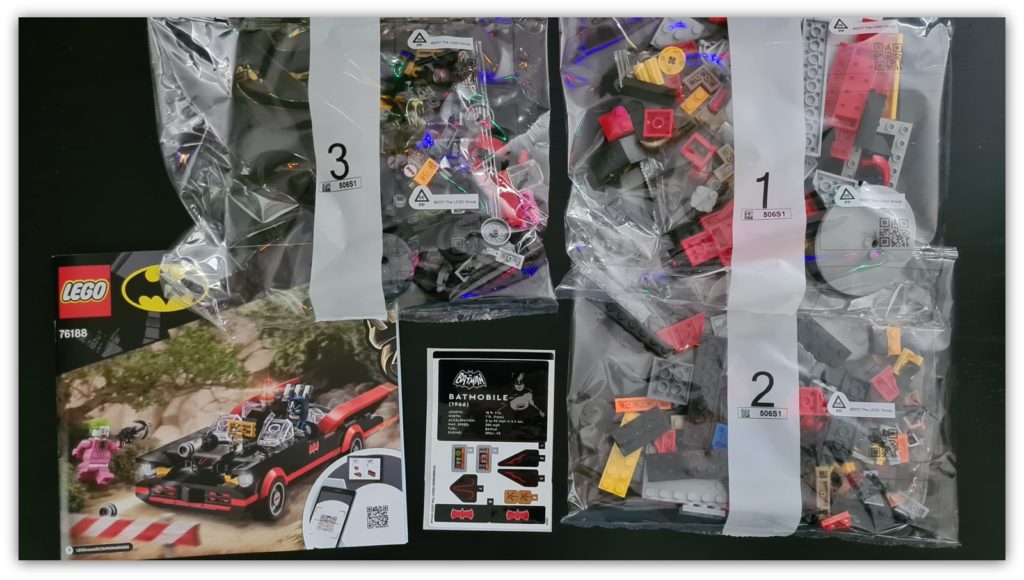 Bag number 1 provides us with Batman, the display stand, and the bottom chassis of the Batmobile. The second bag builds on the chassis (if you pardon the inevitable pun) and completes the main body of the vehicle. The final bag gives us the Joker and the fins and final flourishes of the vehicle.

I wasn’t surprised to see stickers in the box as this is something I’m getting used to especially in low-priced sets. However, given the importance and prominence of these stickers (such as the display information) I am really surprised that no effort was made to protect them from being creased in transit. Especially given that Batman’s cape is boxed for exactly that reason.

Let’s start with the two figures that come in the box, and where better to start than Batman himself. There are already well over fifty different variants of the Batman or the Batsuit (see the article here).

The three figures I have in the picture above are the figure in the box, the Batman from the previous sets and the 2020 collectible DC Comics series. What I love about this “1966” variant is that the torso has a lot less muscles; this figure never looked as muscular as the comic book or movies. The utility belt is printed and again a lot simpler in design. I noticed that the DC Comics version just has a belt; the utility packs of the TV show always included some small gadget that would enable Batman to escape whatever cliff hanger had been set up at the end of the previous episode.

I’ll mention it again later, but there was a Classic TV series Batman set released in 2016. This was the Batcave and featured several characters including the Batman and the Joker.  The older “classic” Batman had a more tanned face which has been lightened in this version; in fact the overall printing is a lighter colour. Interestingly, the utility belt has a simpler design to it; I don’t think this detracts from the overall printing.

The cape is this fabric one, in a not-black colour (the TV version of Batman wasn’t the dark, brooding version we have come to know). 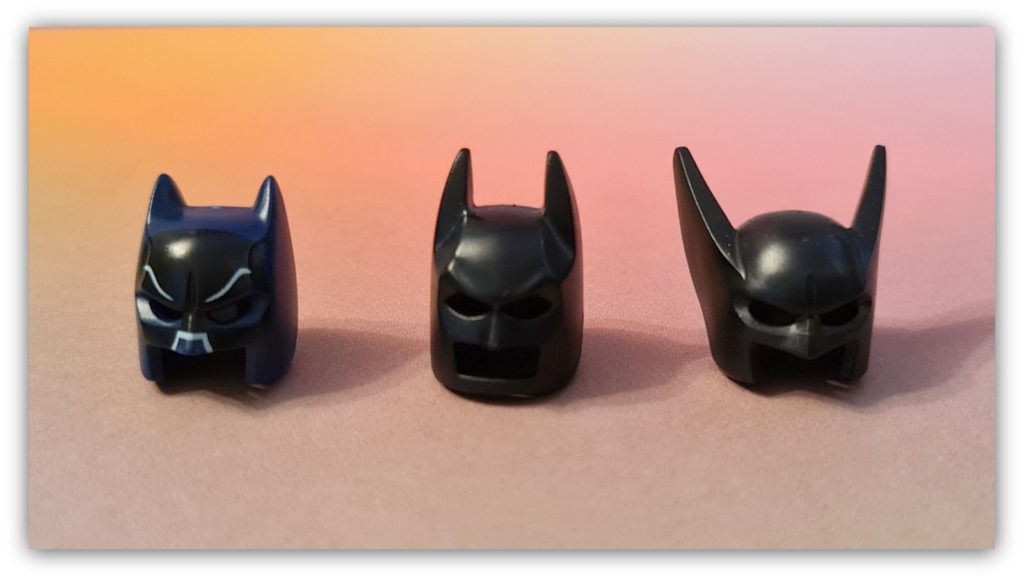 Finally, we have a new helmet. The ears are a lot shorter, and I love the light blue highlight printing for the eyebrows and nose piece. 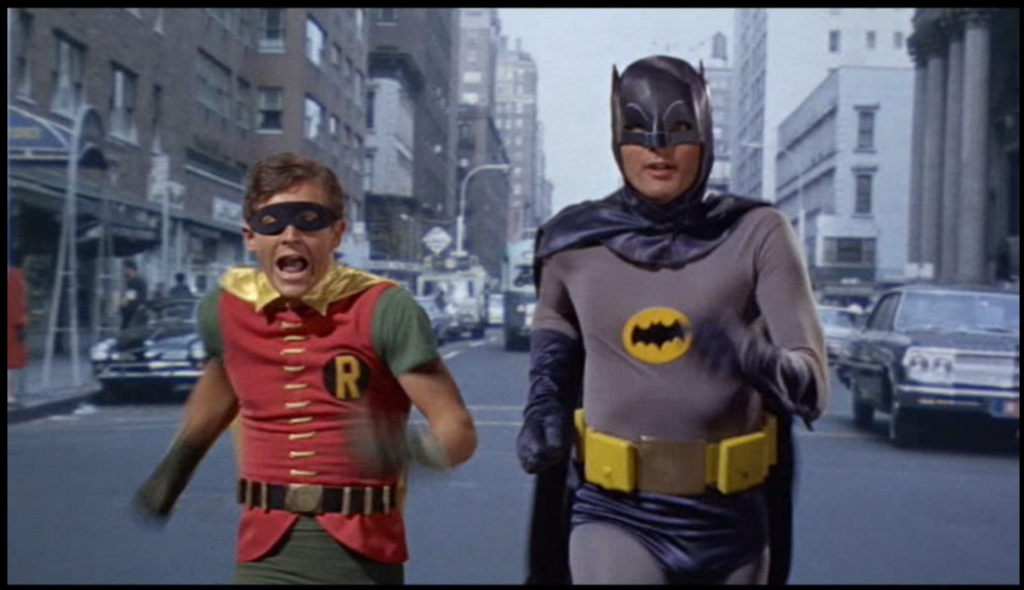 I found the above image on IMDB and it’s clear to me that this minifigure is a faithful copy of this iteration of Batman. 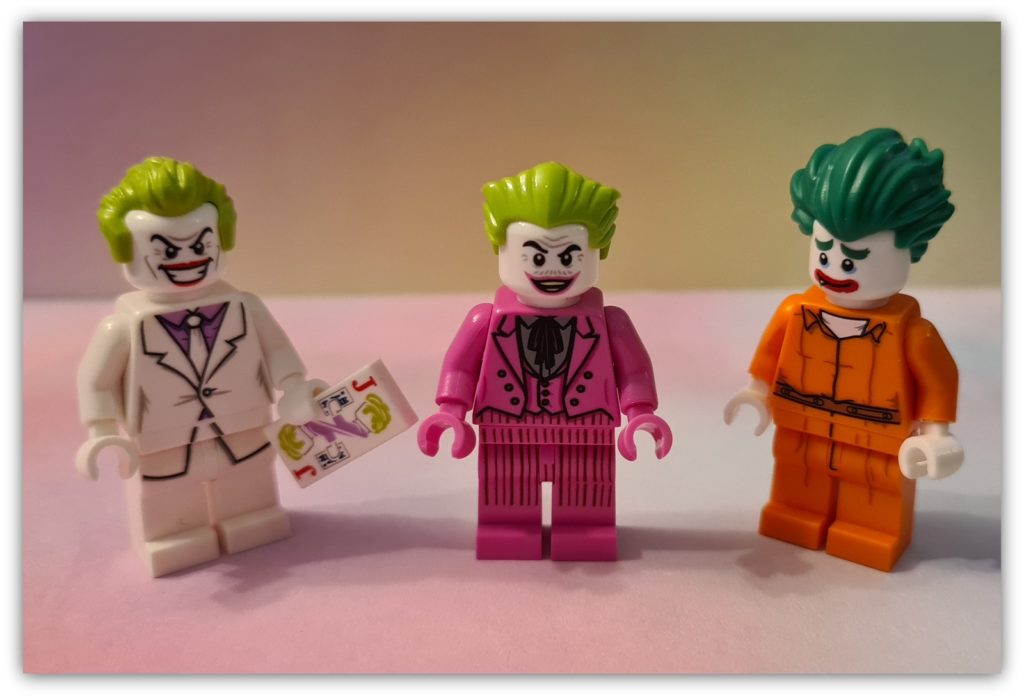 There are two LEGO minifigures in 76188; and that second figure is the Joker. Over the series there were 37 villains (although some are technically listed twice as the actor playing them changed) but the third most frequent villain with 19 appearances was the Joker. For some bat-trivia, the most frequent was The Penguin, played by Burgess Meredith. (information from Mentalfloss.com)

I’ve lined up three Jokers in the image above. We have the LEGO Batman Movie Joker on the right, the DC Collectible on the left and our classic figure in the centre.  I love the fact that they went with the purple suit, which is exactly as I remembered him, but there is a small, but wonderful feature on that face.

(image on left from Mentalfloss)

Can you spot it?  The actor that played the Joker, Cesar Romero, refused to shave his moustache for the role, so the white face paint was smeared over it and was always slightly visible; and this has been recreated here.

I think the one unfortunate observation is that the other side of the face is quite plain compared to the 2016 version; I think if they had gone with the “ooh” face that would have made this figure perfect. But from a display perspective it isn’t a big issue.

Whilst the TV show was about Batman, the series always focused on the Dynamic Duo, with Robin being there to help Batman, or more likely get caught and having to get Batman to rescue him. Additionally, as Robin (or rather, Dick Grayson) was a young teenager, he also provided a useful foil to enable the show to promote good, healthy living and habits.

Unfortunately, Robin does not appear in this set. He did appear in set number 76052, “Batman Classic TV Series – Batcave”, along with figures of Penguin, Catwoman, Joker, Riddler and Alfred; as well as Bruce Wayne and Dick Grayson (and of course Batman); however I stand by my assertation that Robin should have also reappeared in LEGO set 76188 as well.  Perhaps he’s in a dastardly trap set by the Joker! Fortunately, Mini Frog_101 was able to help Batman this time!

Anyway, onto the Batmobile!

Holy Neat Use of Parts to make the Display plinth! 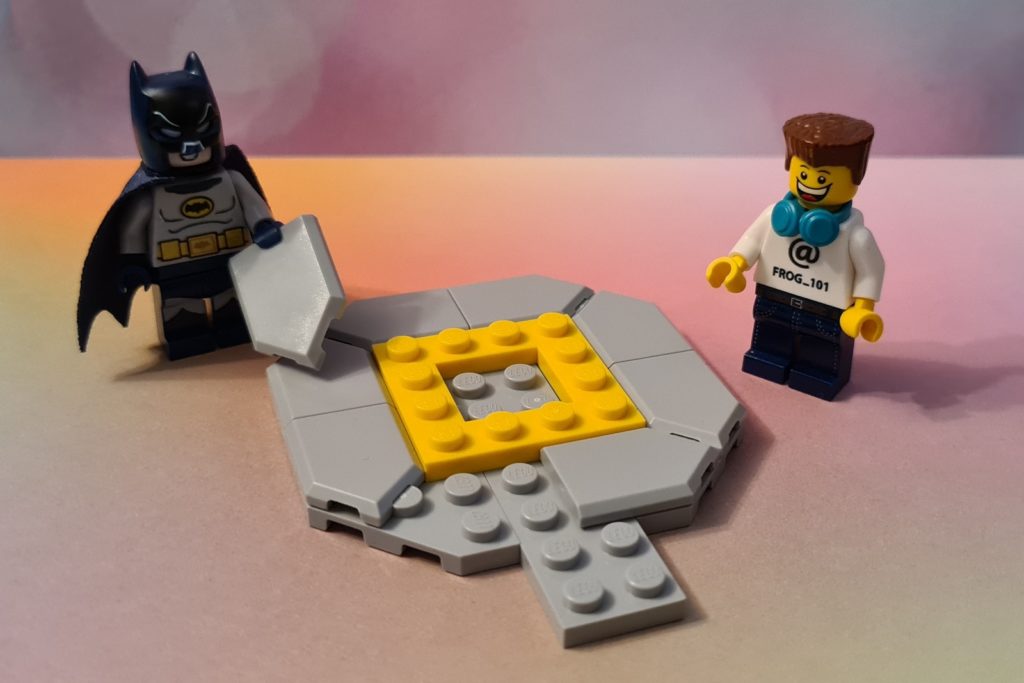 In the first bag, we start by building the display plinth.  A simple construction, but I really liked the way that the shields are used to create the neat diagonal lines, especially given these get hidden when the dome gets put on the top.  The biggest sticker goes onto the front plate and that’s ready to be used when the Batmobile is created. Not sure why it had to be built first, but it was quick and simple. 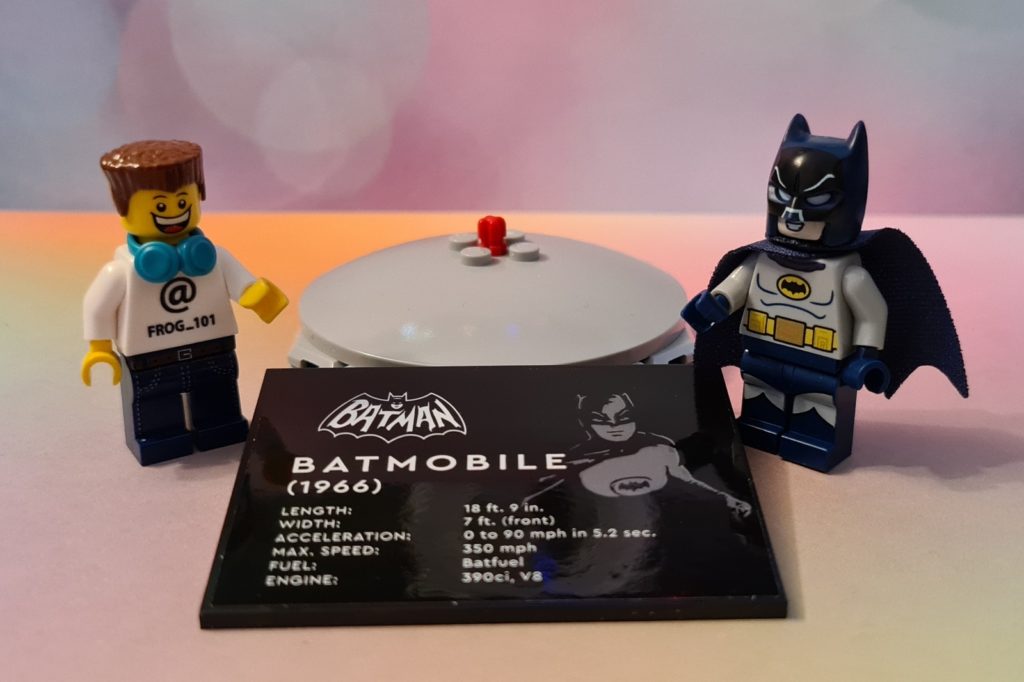 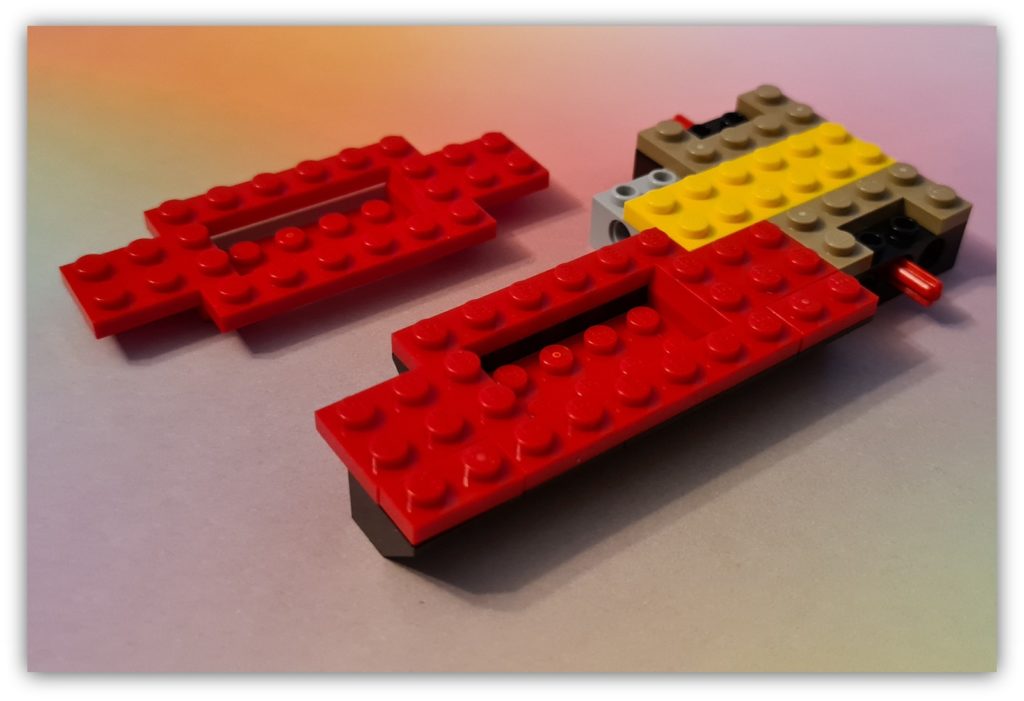 Very quickly into the start of the build you get an idea of the scale of the build. This is highlighted using these two red pieces, which I have previously seen used as a chassis base for a single vehicle. 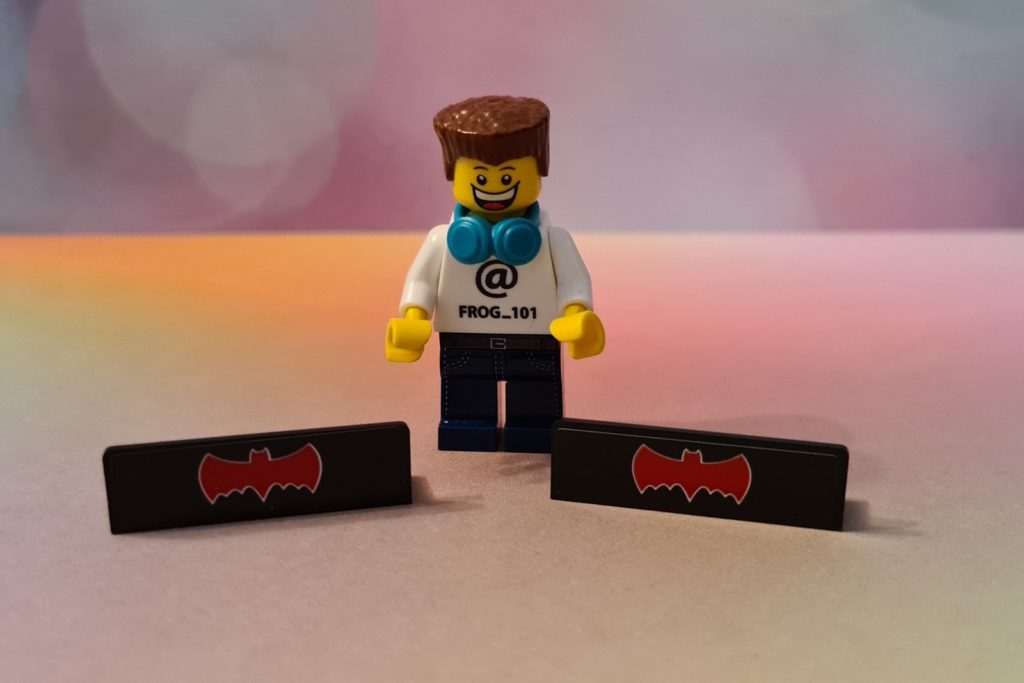 The door panels are straightforward but do require the stickers to be applied. Fortunately, I managed to get them on straight and centred. 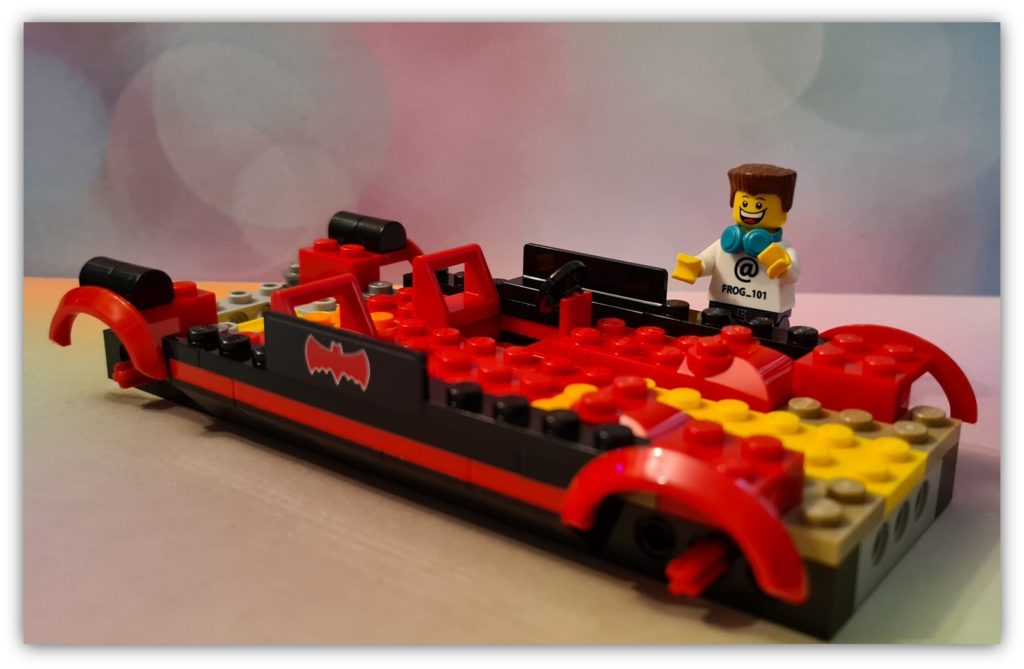 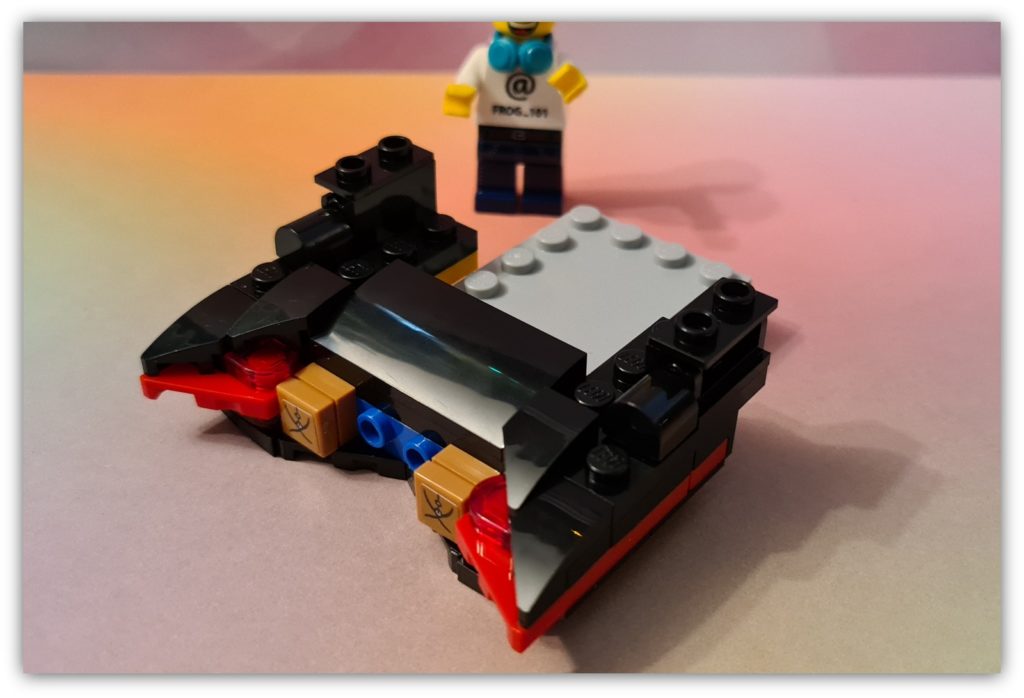 The back of the Batmobile is firstly built separately and then added to the vehicle. I wasn’t sure what those two brown things were, so I had to go to the web. They are a parachute construction as can be seen in the image below. 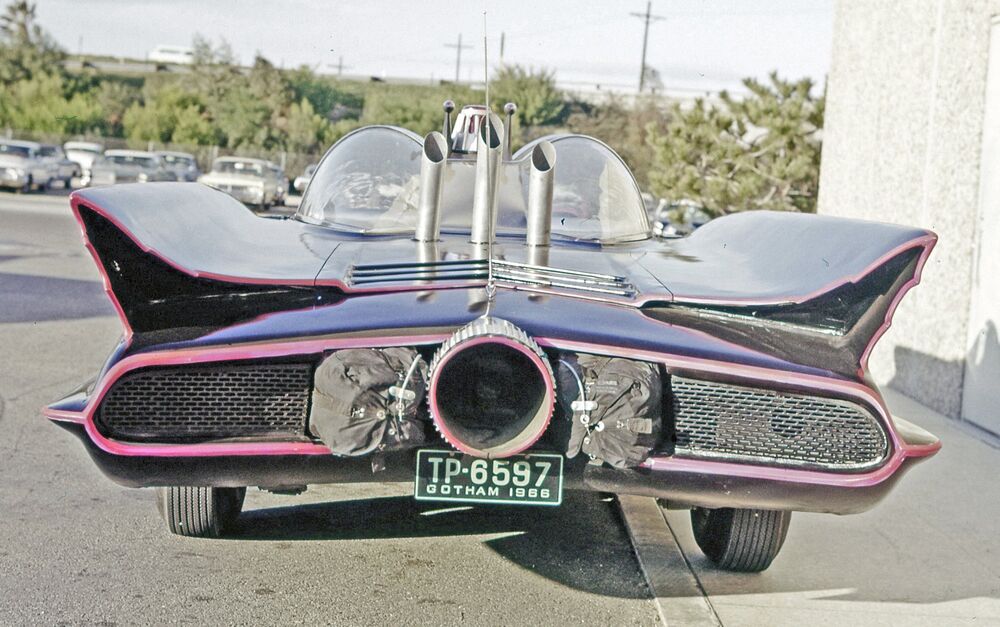 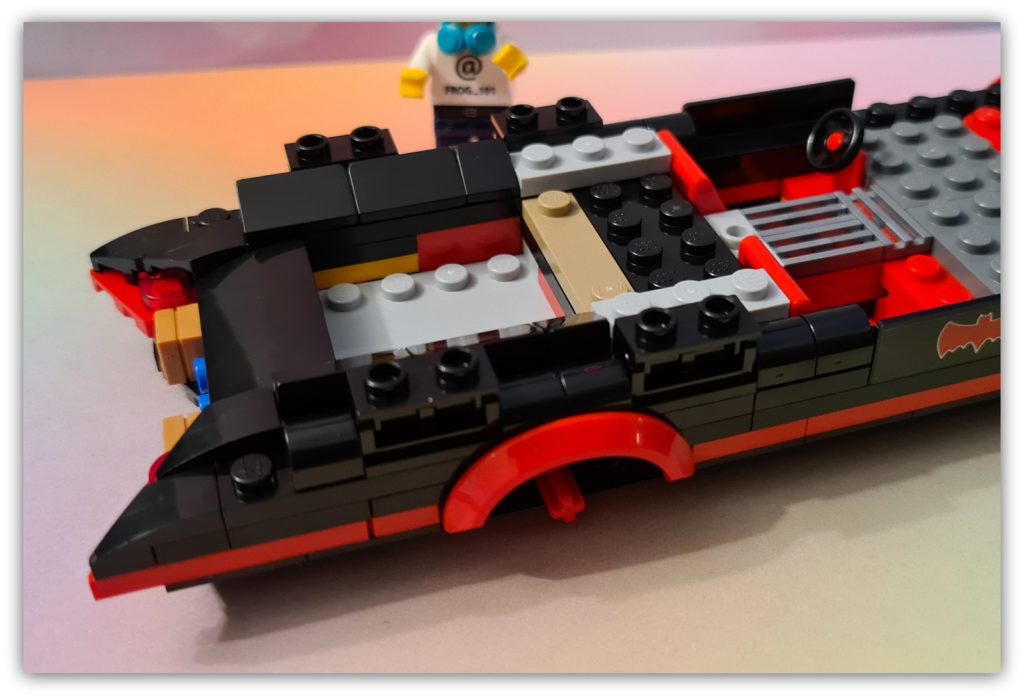 Once the back is fitted, a little more attention is then given to the cockpit. 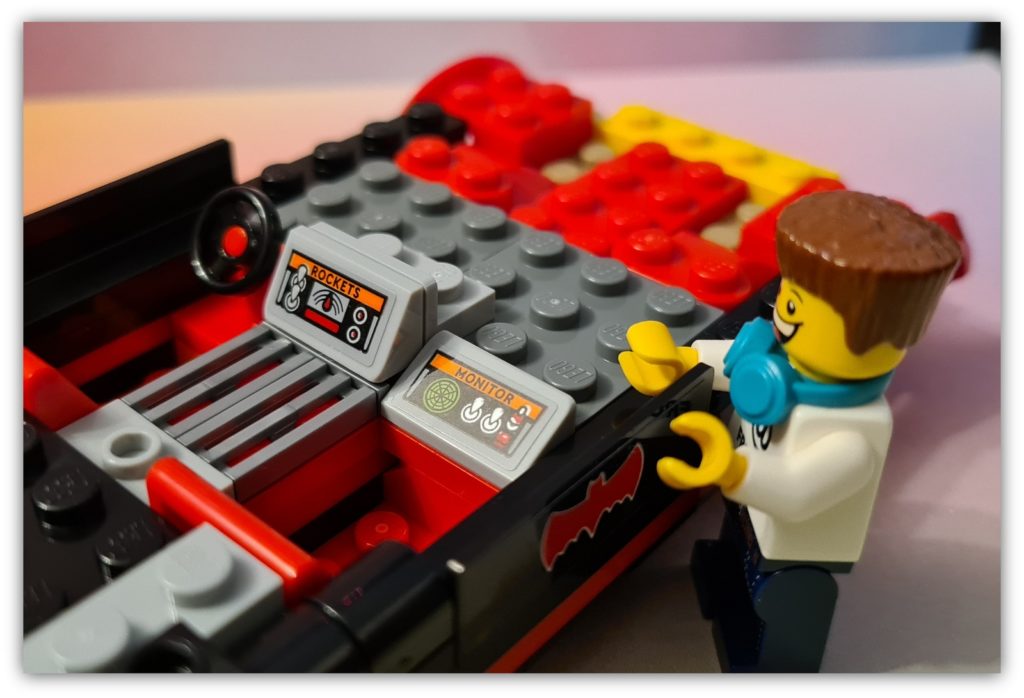 In these more enlightened days, I’m surprised that they’ve given the driver more control over rockets than monitors! But we’ll come back to rockets later in the build. The rest of the construction of bag two just provides more black cover to the vehicle. 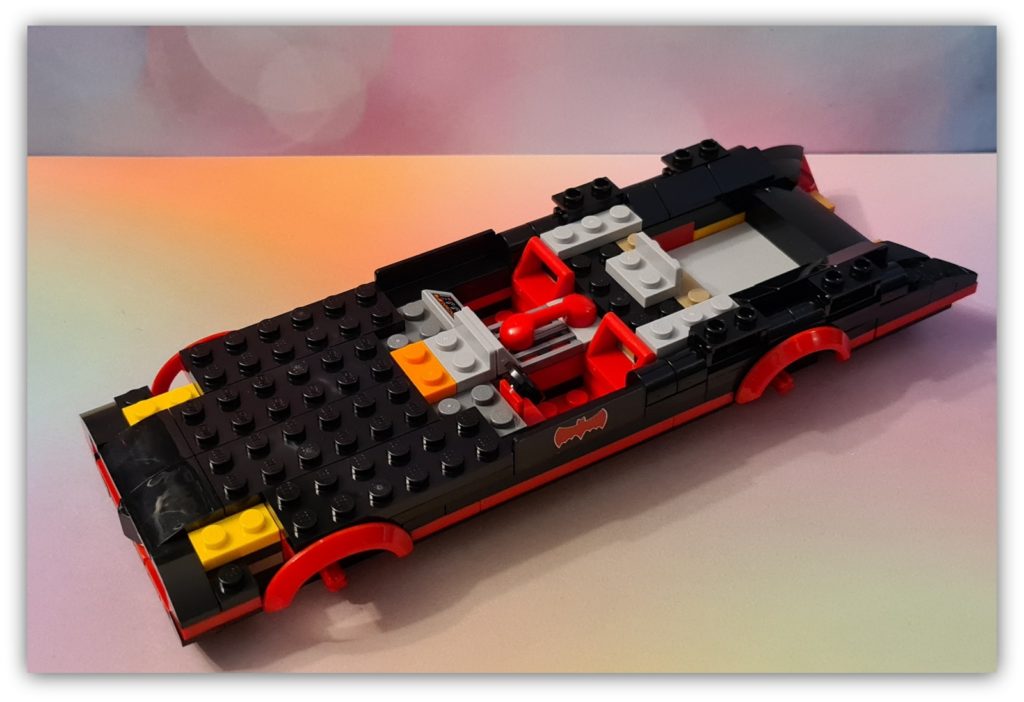 Holy Last bag of the build! 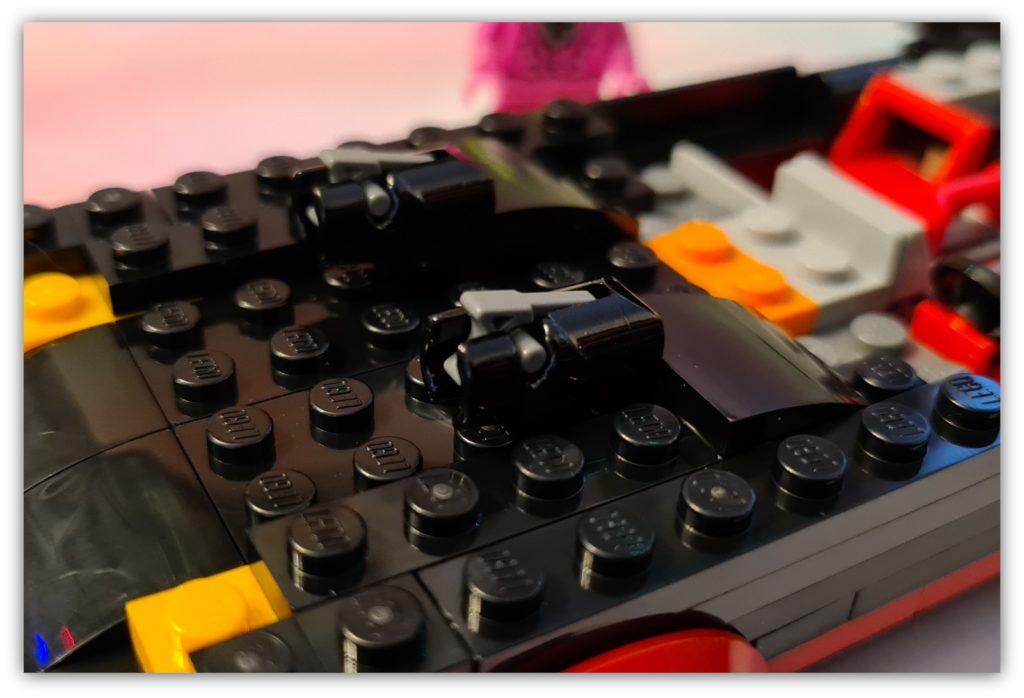 The first step of the third bag is to assemble the front facing rockets and for me, this was a huge frustration. You see, the Batmobile in the TV series (all the versions, see trivia below) never had rockets on the front. Whilst I understand the need for playability in LEGO sets, I don’t understand why there is a need to include things that weren’t there in the original. You wouldn’t include a rocket launcher on the City street sweeper, so why do it here? There are instructions to take these off the vehicle, but you must get right through the build instructions before you get to them.

You can see from the image above that this is a long, wide LEGO vehicle, with space for two passengers side by side. The next part is to fit the boot (or trunk) covering.

This hinge is very clever in my opinion, giving the appearance of a very comprehensive and solid link.

The fins are added and angled out; the centre piece over the cockpit is added and the wheels are fitted. These last parts were very quick and not complicated and it was only when I had fitted them, I thought “Oh, I should have been photographing those as I went”. 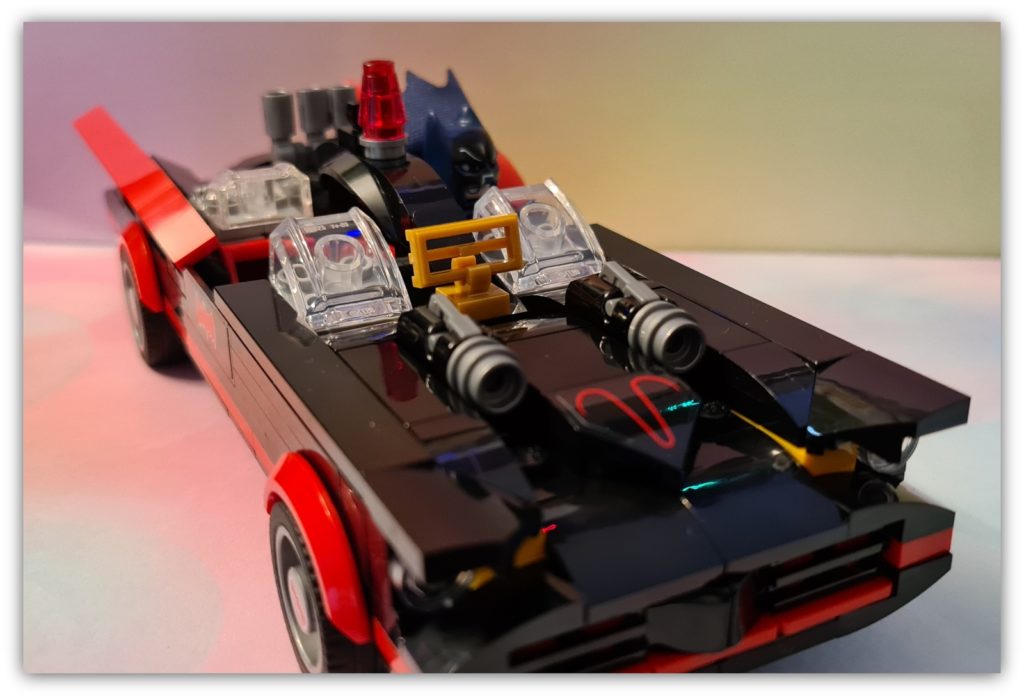 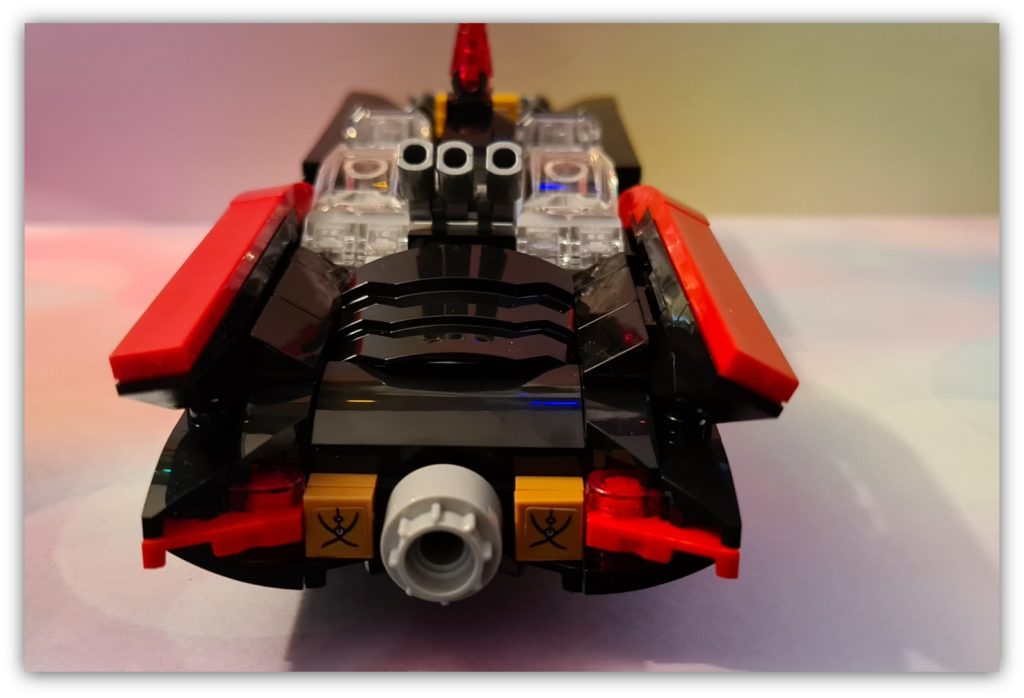 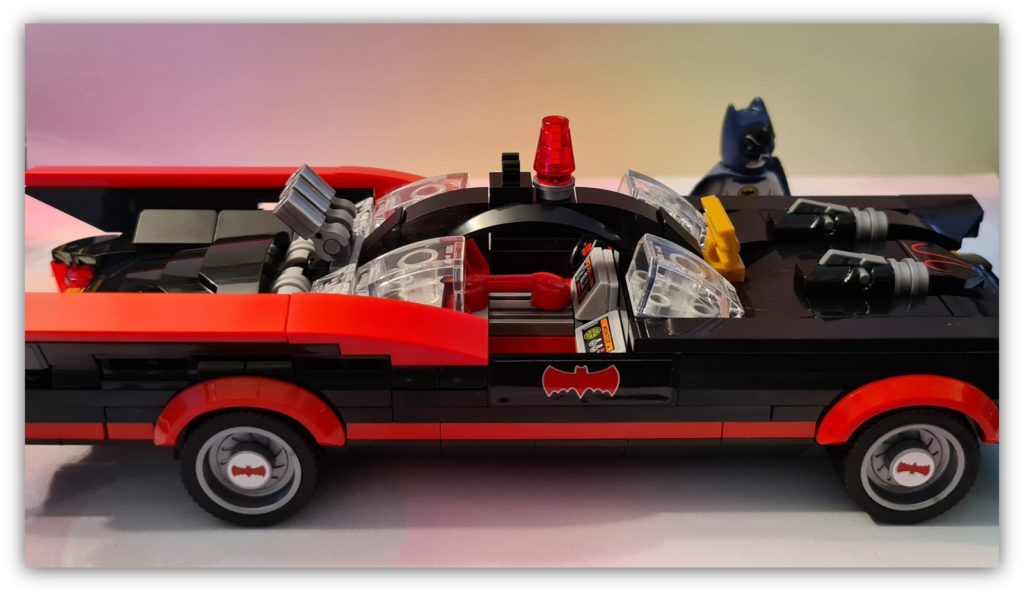 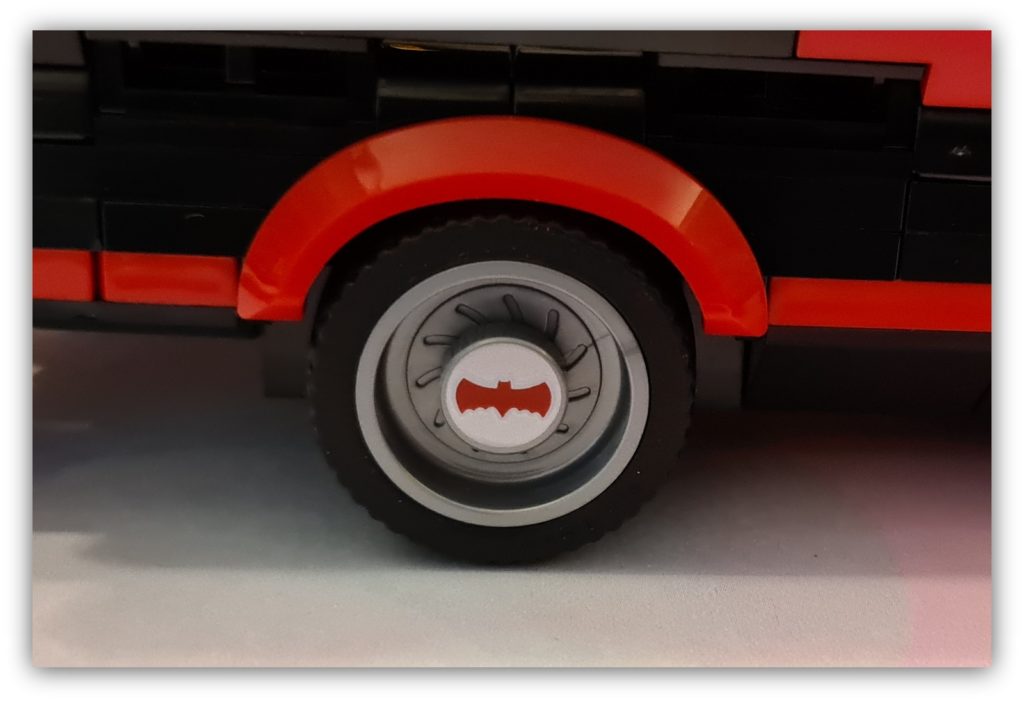 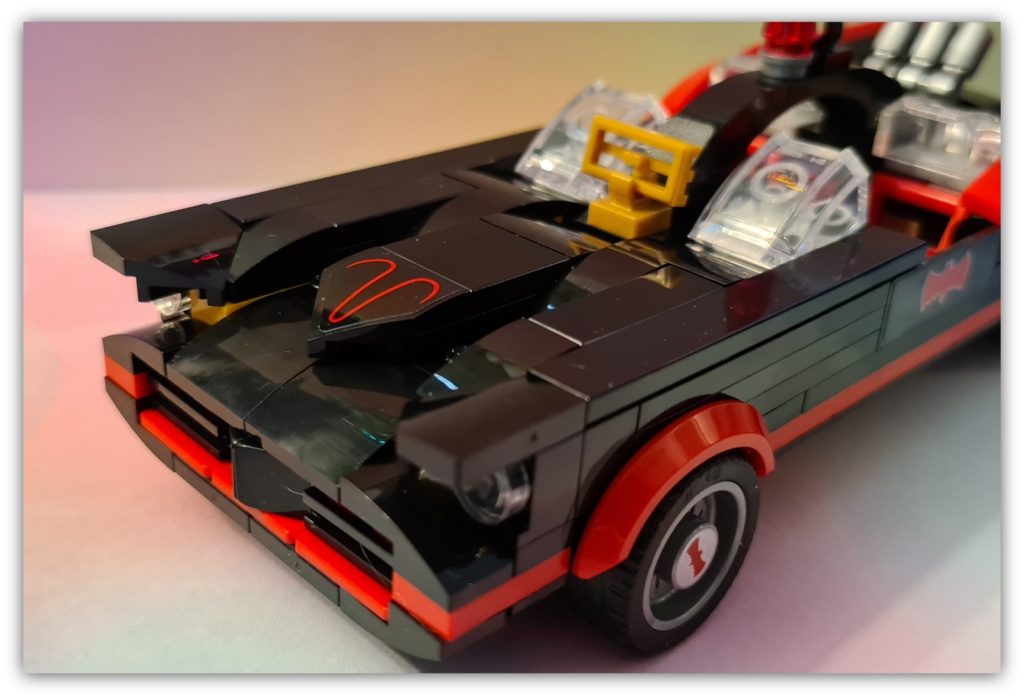 As I said before, the Batmobile never had forward facing rocket launchers. Fortunately, at the end of the instructions there are steps to enable you to remove those weapons. Unfortunately, though it does leave a couple of studs visible which detracts slightly. Whilst they were present when the rockets were in place, the grey studs distracted the eye away from this.  But it’s a minor irritation on what is an incredibly fun build with some brilliant attentions to detail.  I decided that I would disassemble the Batmobile and put a couple of 2×1 flat tiles to hide this and neaten the front. The images below show the front without the rockets, with and my final “studless” version.

Overall, though, I enjoyed the opportunity to build the Batmobile and it is now displayed along with all the Batman figures I have collected so far.

So, there was a real Batmobile! The original vehicle was a 1955 Lincoln Futura concept car. The one that was converted was used to road test such innovations as push button gearshifts, coloured warning signals for fuel consumption and featured a special 330 horsepower Lincoln engine as well as an air scoop for air-cooling the rear brakes.

The original vehicle was one inch (2.5cm) short of nineteen feet (5.8 metres) long. It was seven feet (2.1 metres) wide and stood just under four and a half feet (1.4 metres) tall with ground clearance in the centre at six inches (15 cm). Interestingly, the original had no windows; the car was airconditioned and entry and exit were by lifting the Plexiglas canopy!

There were four versions of the Batmobile, with the three later versions being built from molds taken off the original and being mounted on a Ford Galaxie chassis. These were made to capitalise on the popularity of the show and were used for shows and appearances as it wasn’t easy to get to all the appearances with only one vehicle! However, copy number 4 was used as a stand-in on one of the shows.

The original vehicle was initially bought for $1; as Ford had been storing it with George Barris and no longer had any interest with it. In 2013, George Barris sold the Batmobile for $4,200,000!

There are a lot more facts, specifications, and history to be found at the website devoted to the Batmobile, 1966batmobile.com

Finally, and because I could, I just wanted to recreate one of the classic tropes from the Batman TV show, the wall climb. Batman and Robin would be making their way up the wall using the Bat Rope and invariably someone would open a window. 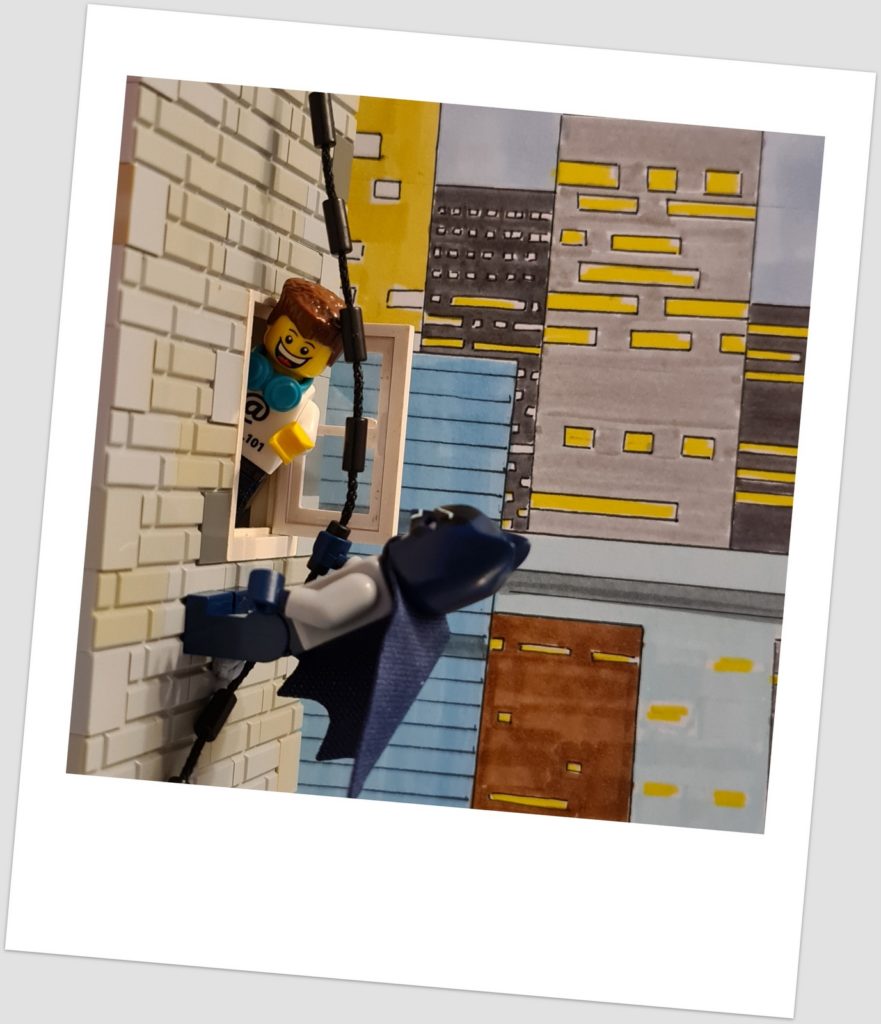 Of course, this whole scene was one of camera trickery, and the actual scene wasn’t as it looked.  So, I created the above image in the same way! 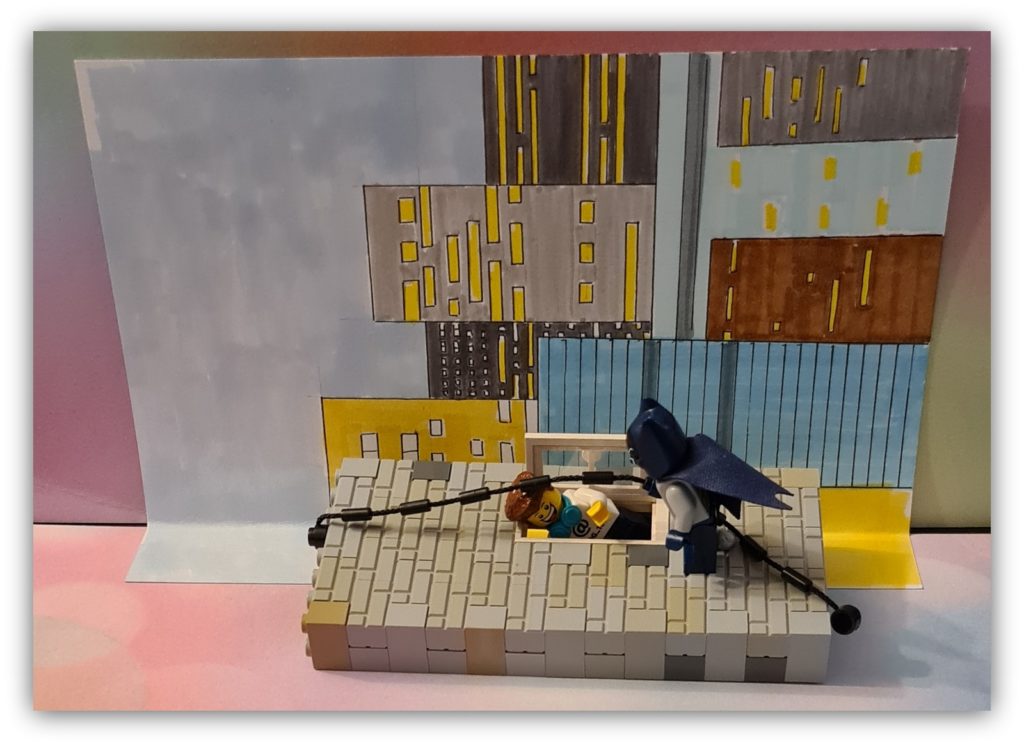