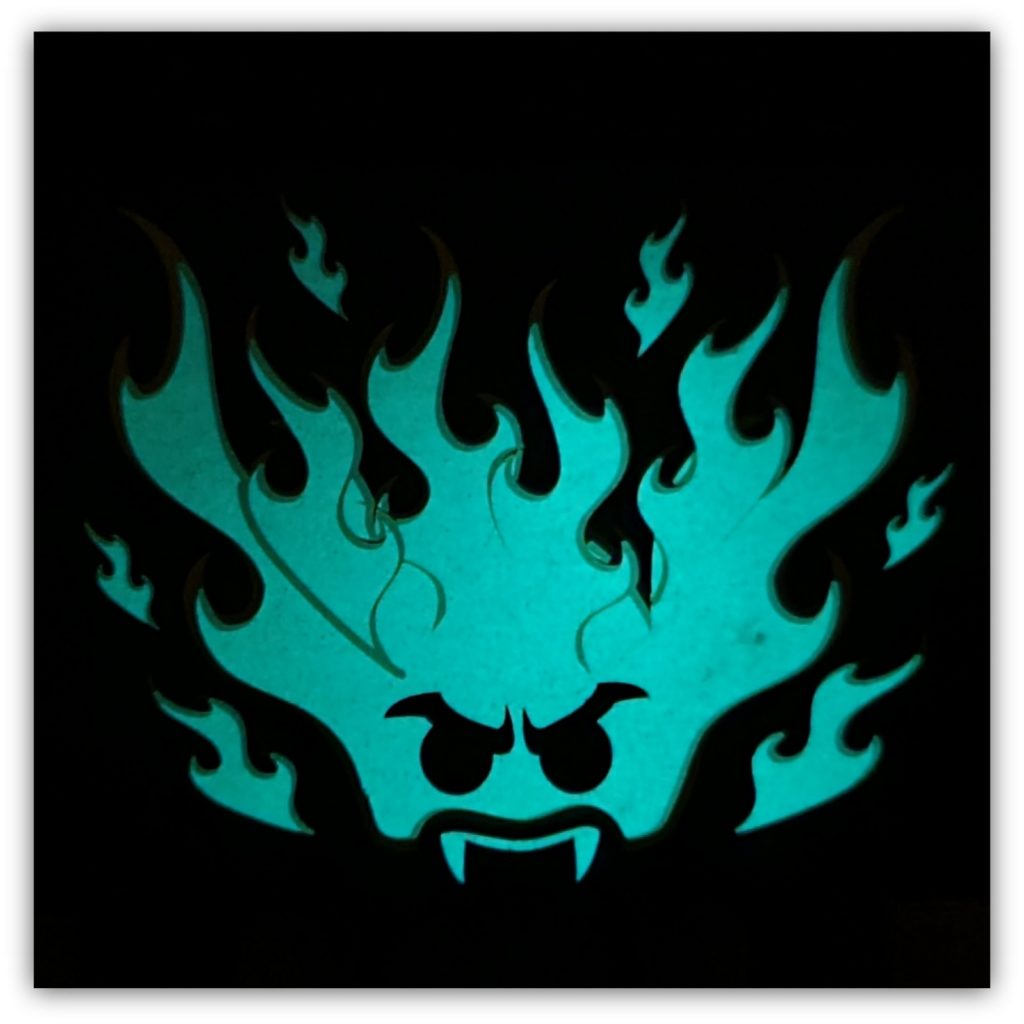 Isn’t it such a shame when it gets dark and you have to put your LEGO away? Wouldn’t it be great if you could continue to play after dark? Today I’m going to look at one of the more interesting colour compounds that is produced, Glow in the Dark LEGO pieces.

I love glow-in-the-dark (GID) figures and not just in LEGO. I have a shelf above my desk that has several GID figures, and it is so cool to see them glowing into the night (there is a light quite close to them, charging them during the day ready for the light show).

Where it began and the science

I thought I would learn a little about this compound, but don’t worry, I won’t get technical.  The oldest references to things with glowing properties dates to 1000 BCE, but this is regarding fireflies and glow-worms. But in 1602, just outside Bologna, Italy, some glowing rocks were found. These, called the “Bologna Stones”, started the first proper scientific study into what is known as photoluminescence. In 1669 the physician Hennig Brand managed to isolate phosphorus, which kickstarted all the glowing.  I guess it was fortunate for us because what he was trying to do at the time was turn metals into gold.

But it is phosphor which is used to create the glow and all glow-in-the-dark compounds use phosphor even now.  The two most commonly used phosphors are Strontium Aluminate and Zinc Sulphide.

Glow in the dark LEGO 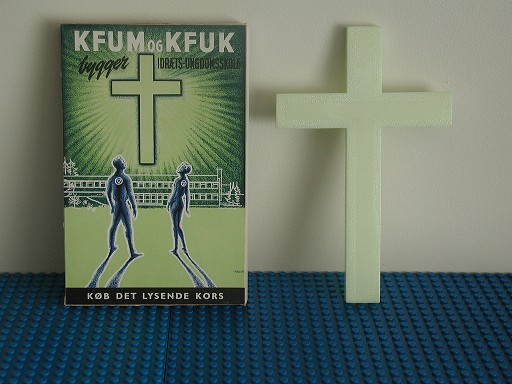 More commercially though, the first proper use of GID was with the ghost shroud in 1990. A wizard’s wand was produced in 1993. Since 1990, only 87 parts have been produced which has made use of glow in the dark.

The ghost shroud was my first introduction to LEGO GID; the original shroud was an opaque white and had a smiling face; in 2012 it had the makeover that we can see using a solid white and the scarier face. The images below show the two ghosts in both normal light and shot at night; even over thirty years later the original ghost still appears out of the shadows!

In the colour guide on Bricklink the three colourways of GID are shown. What I find interesting is that the “Glow in Dark Opaque” and “Glow in Dark Trans” (green) both stopped in 2011, before “Glow in Dark White” started in 2012.

The Best glowing sets and parts 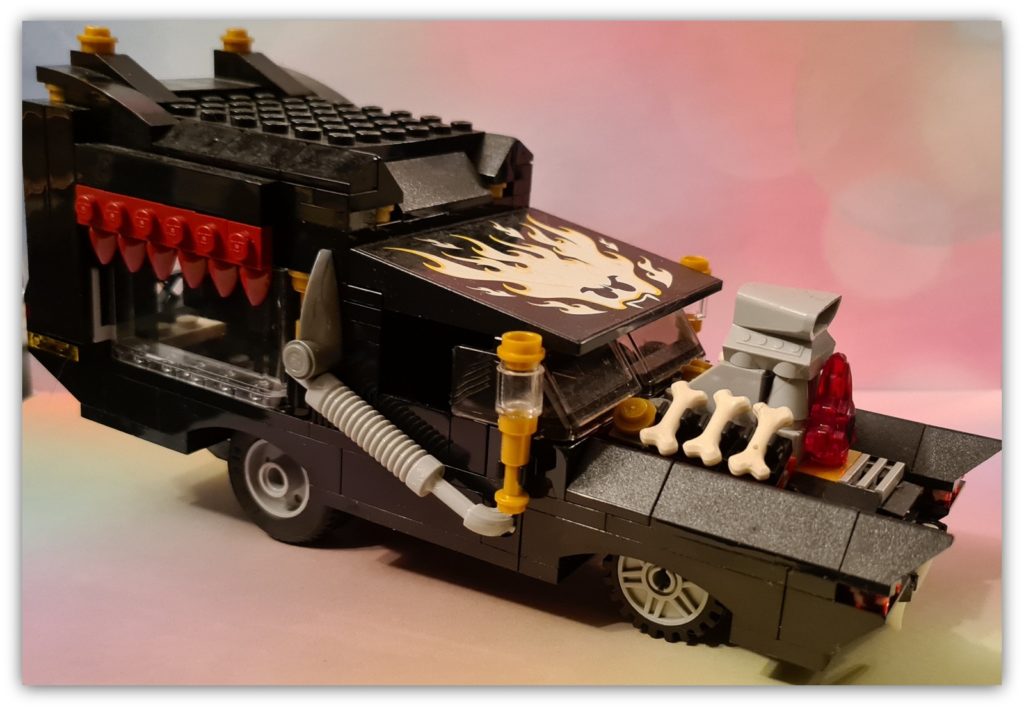 In my opinion, the best theme to enable you to collect glow-in-the-dark parts and figures must be the Monster Fighters theme from 2012. Ten sets were released as part of this theme and of those ten only two didn’t have some form of GID part (those two sets were 9461 The Swamp Creature and 30200 Zombie Coffin Car; but they did have some excellent parts for the next Halloween build, including this really cool hearse! I was hoping that the Hidden Side theme would pick up the GID mantle, but it didn’t.

Fortunately, Firestar Toys keep a stock of glow in the dark parts including the very impressive LEGO Animals Anglerfish. Using that as a head, with GID BrickArms bird wings and white body and torso, I created the quite unusual (and a little scary) “Angel Fish” which now sits on the shelf. 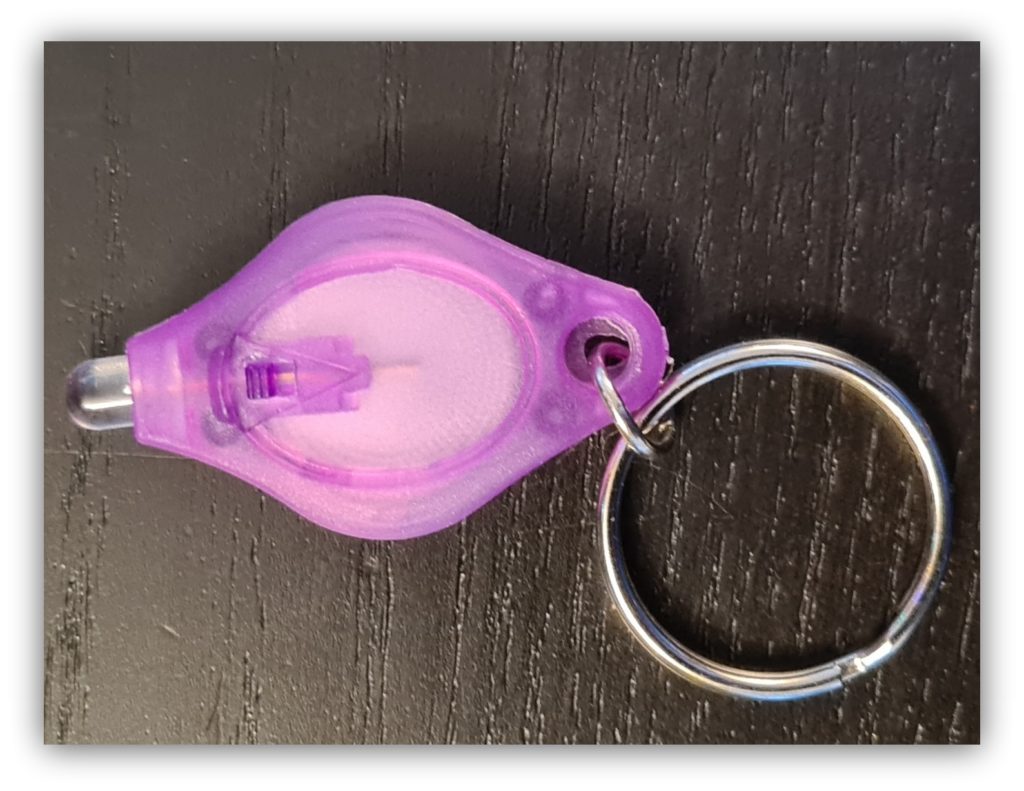 Years back I was gifted a mini UV keychain LED light so I could see the glow in a piece of jewelry I had bought. I’d not played with black lighting before (at least, not at home) but suddenly my LEGO parts took on a whole new colour effect! The images below show the effect that the Black Light had on the translucent parts and also on my “Angel Fish”; I think you’ll agree the effect is really quite something!

Black Light torches and lights can be bought relatively cheaply and as can be seen can bring a different effect to your figures! 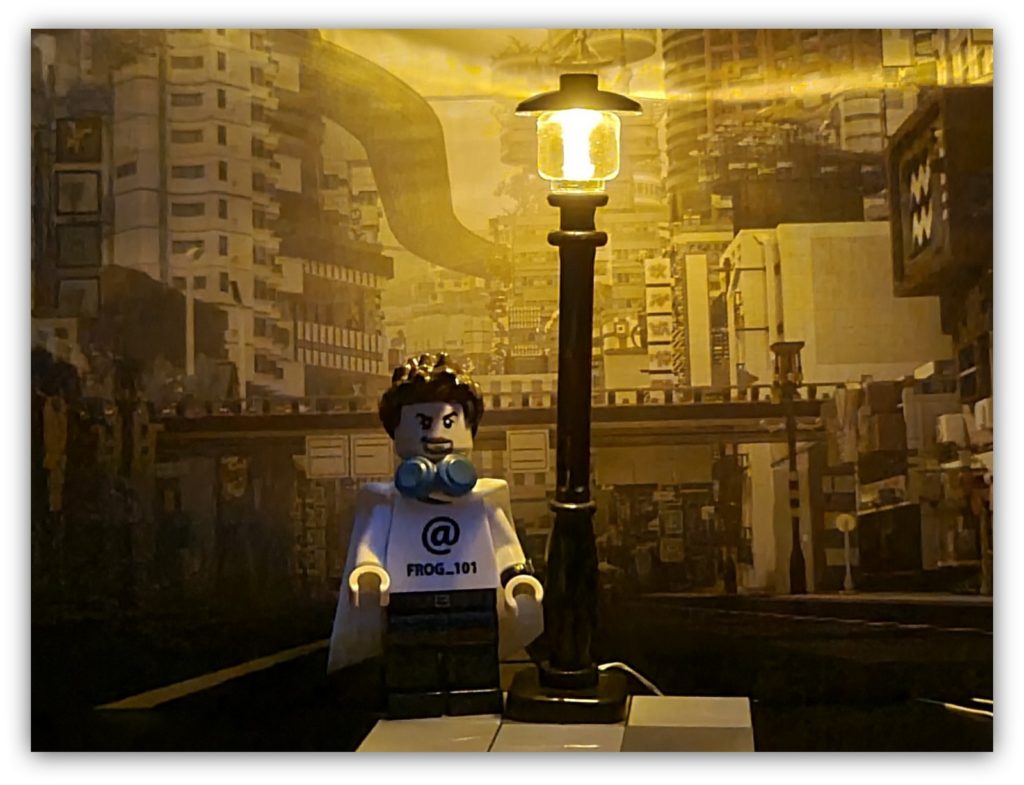 I can’t really write about LEGO after dark, without mentioning actual lighting in LEGO sets. According to Brickset there has only been 24 sets which focused on lighting specifically, starting in 1958.  Today though, some sets, such as the “Tower of Orthanc” (set 10237) featured an FX Light that glows when pressed. These are self-contained units with batteries built into them. 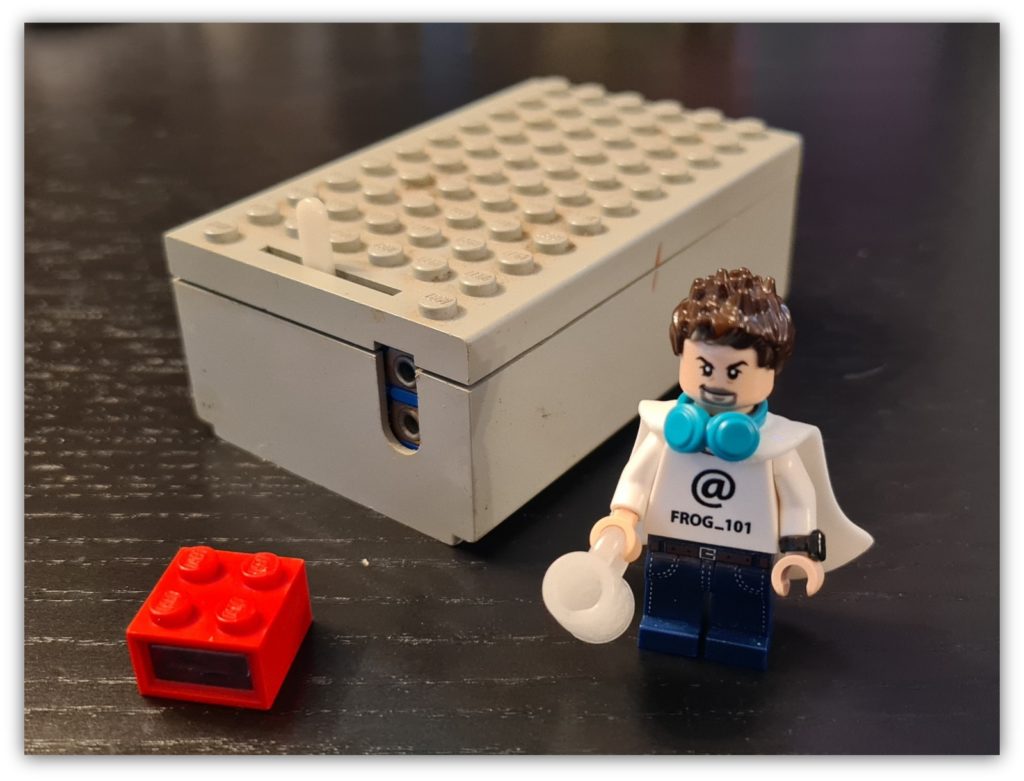 Back in the 1970s and 1980s, the use of lithium batteries was a very rare thing (mostly for hearing aids) so power and lighting came from a huge box that used 3 C-cell batteries; frustrating because you never had enough of these unusual batteries around the house. The light brick itself was quite feeble in terms of output; because of the way the connecting wires worked you could plug multiple lights in; however, the result was that the lights dimmed further!

In 2017 there was a Kickstarter campaign to produce a system of interconnecting bricks that was compatible with LEGO, but which conducted the electricity through them; which importantly meant you could do away with any wires and build directly into your LEGO set. Unfortunately, perhaps it never took off properly. Some sets are available through eBay though. 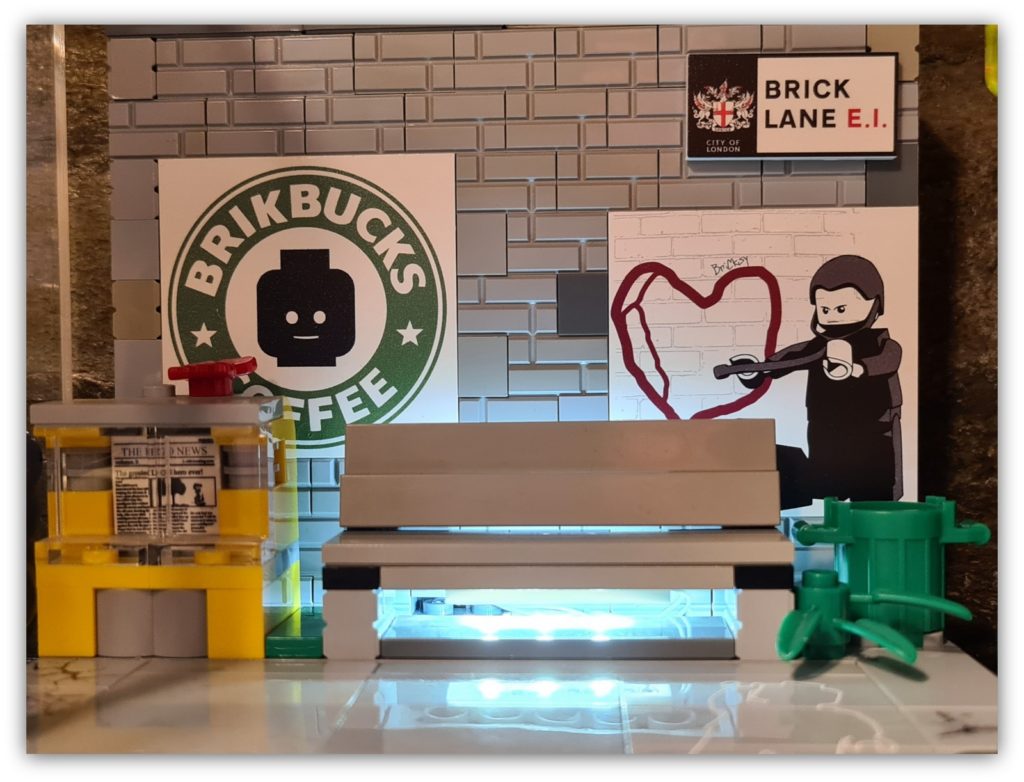 Earlier in this article I showed an image of a figure under a streetlight. This was a third-party part where they had adapted a standard LEGO piece with a small LED and wires connecting to a USB socket. Whilst I bought this at a LEGO exhibition many years ago, I noticed that there are a lot of companies now providing quite effective lighting solutions that will fit in LEGO sets, mainly as they use LEGO parts to fit the electronics to.  I have even seen that you can buy lightsabers that will light up, perfect for those effective night shots!

Quick note about photography at night

As a final note on this article, I thought it would be worth touching on photographing the glow in the dark and lights at night.  All the images that I have taken in this article have been on my smartphone (the Samsung S20+) which manages low light images quite well.

However, for night images cameras need to allow more time to capture more light.  This means it takes longer between pressing the button and the image being ready. You should look to make sure that your camera doesn’t move; so, using a tripod or fixing the camera in place is important. Just hoping you can keep still will result in shaky images.  Secondly, if you don’t have a camera that has good night light functionality (or a longer time to get the light in) then the final image may look grainy.  I haven’t found a good way to counter that, but some image editing programs will allow you to make that a feature.

I hope that this has been an interesting article. Glow in the Dark and lighting is still quite a small market, but well-placed lights can bring a LEGO build to life as it gets darker and a Glow in the Dark figure is perfect for those scarier images!