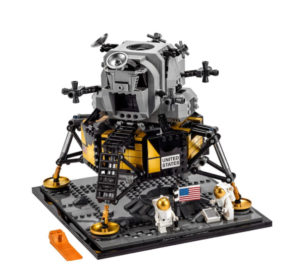 On July 20, 1969, at 20:17 UTC, the Apollo 11 mission landed two men from planet Earth on the moon. Neil Armstrong and  Buzz Aldrin made first contact. While these two always get credit for being first, Michael Collins was on the moon in spirit. Technically, though, he actually orbited the moon in the command module at the time. The lunar landing is one of the Greatest achievements in human history and it is only fair all three astronauts are mentioned and remembered. This month, the LEGO Apollo Lunar Lander also landed on store shelves to mark the occasion.

It does not surprise me to see that LEGO, as we approach the 50th anniversary of the landing, decided to release another set in the Creator series. Set number 10266, the LEGO Apollo Lunar Lander released on the 1st of June 2019. With 1087 pieces, it’s not to be taken lightly.

“…the LEGO Eagle has landed!”

This is not the first time LEGO has attempted making a model of the moon landing, but perhaps it is LEGO’s best attempt yet at getting it right! I first saw a version of this in 2003 when the LEGO Discovery theme released. It released a lunar lander along with a model of the Shuttle Discovery, Mars rover, and ISS space station. At the time I thought they did this really well. I held high hopes they would have made the command module too, as it would have been a nice addition. But, again, LEGO didn’t deem it worthy enough. However, if it wasn’t for that ship they would never have got there and back in the first place!

Instead we had to wait until the LEGO 21309 Apollo Saturn V rocket was released in 2017 to get a mini version of the command module. Shame! The lander I bought in 2003 was less technical than the new version. Although it came with two astronauts, neither had names printed on them. They were generic, like all the others before them. (Hey! At least we got to name Benny from the LEGO Movie?)

“It’s one small step for minifigures….”

I must admit I enjoyed building that set. Though a few years later I sold it due to space restraints, I still remember that set fondly. I was always surprised too, that LEGO didn’t supply the quarter moon bases with the lunar lander. It would have been a nice show-piece to put the set on, not to mention, a play area to add more detail. Mind you, this time around, I think they have learned their lesson: this new version has a base provided which looks like a piece of the moon. Nice touch that. 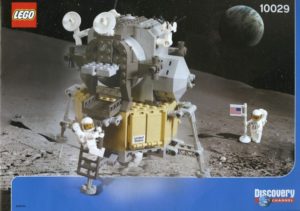 Another feature of the older set was that the legs folded in and though the landing pads look smaller, they seemed to achieved the right scale in the newer version. Also in the old set, the lander could split in half. I hope this has been brought across to the newer set. It appears as though this time they got the colours right, which is no mean feat. I will be interested to see the newer one up close and see how it’s put together. One feature I am unsure of is the windows.

Like I said, I have seen other versions of the LEGO Apollo Lunar Lander, as many did not share my opinion on the LEGO Discovery version. One MOC had practically got it perfect. It even had included a way of opening up the lander to see the astronauts inside that the older LEGO version couldn’t do! I hope the designers at LEGO learned something from this. 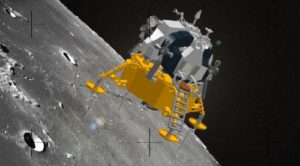 This version of the LEGO Apollo Lunar Lander to the left is the one I think is almost perfect. The shape looks right as does the colour. It comes as no surprise that with the LEGO version, I’ll be seriously looking at changing it to match this. It seems a shame LEGO didn’t look at this first before they decided on their version. Not that making something from nothing is easy. It takes real skill to put something like this together. I, for one, applaud the designer for coming so close to doing this. I just wish the designers at LEGO would do the research before embarking on a new remake.

In terms of price, it’s a Creator set, so the price point should be reasonable. I also hope that LEGO will provide hidden extras, to increase value-for-money. I say this because with the last few Creator sets I’ve bought, I have noticed a decline in quality. For example, the Volkswagen and the Aston Martin both had missing pieces, which to me was a major disappointment. Only for the fact I have a large collection of pieces was I able to finish them.

Not that I don’t think this new LEGO Apollo Lunar Lander does not deserve a chance. You only have to look at the prices on eBay for the older version to see that someone out there is making a killing on resale. 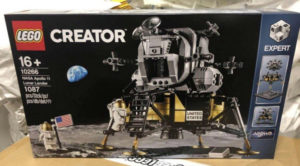 It’s a nice piece of history, too, and I am looking forward to see what LEGO’s latest take on this is like. From what I can see in the photos available there is a nice array of pieces, some nice technical elements as well as some new parts I don’t recognise. This should be an interesting build! The box art shows a a little plaque, and I hope that this is a printed element and not a sticker. Lately these are not flavour of the month, and again have caused problems in the past.

Last but not least, it’s about time they made minifigures of Neil Armstrong and Buzz Aldrin. I hope this time they actually put the names on them. Maybe at a later stage they will release the attaching command module and add Michael Collins. Now that would be something to see!

Like I said earlier, the set released on the 1st of June. And “Yes!”, Christmas is coming early, as I’m putting my name down for this one!

Don’t forget to check out the in-depth review of this set, and how you can improve the design!