Gathered friends, listen again to our legend of the LEGO BIONICLE …

The LEGO community was recently shaken by the results of a LEGO Ideas poll to determine a 90th anniversary set for 2022 based on a discontinued theme. There was rejoicing and horror in equal measure after LEGO BIONICLE, a constraction theme from the early 2000s, took first place. I’m sure a lot of younger readers are wondering “what is LEGO BIONICLE?”, and a lot of older AFOLs are wondering “why should we care?”. While I can’t answer that last question for you, I can take you on a deep dive into the theme that, critically, saved LEGO from financial ruin at the dawn of the 21st century. 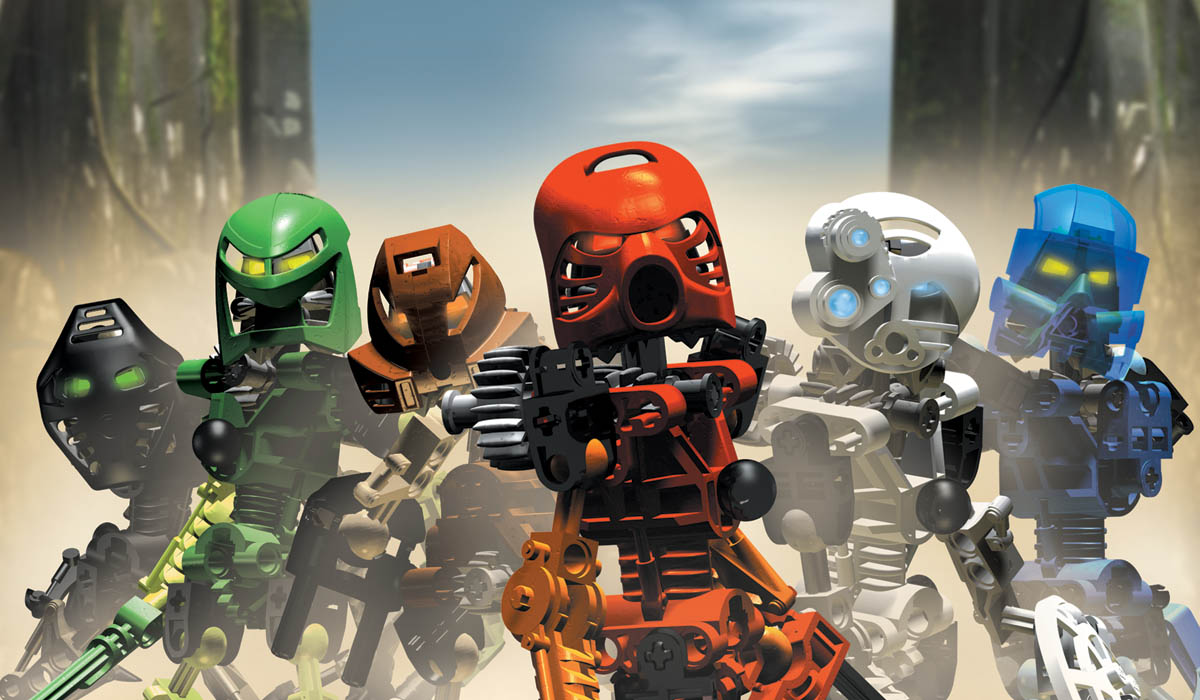 What is LEGO BIONICLE?

While LEGO themes were no stranger to named characters or engineered conflicts (e.g. the feud between Johnny Thunder’s team of adventurers and their enemy Baron Von Baron, or between various Castle factions) BIONICLE was the first time LEGO had committed to a rigid storyline for a theme. Many within the company felt that giving children a singular storyline would restrict creativity, though this story would prove to be essential to BIONICLE’s success.

For that reason alone, we have to talk about LEGO BIONICLE a little differently to other themes, let alone because of its multimedia content. You see, LEGO had already been flirting with video games and online content in the late 90s, but BIONICLE represented a focused effort to enhance the play experience with digital material. Stories, mini games, lore, videos, songs and all sorts of other materials that contributed to the storyline were distributed on BIONICLE.com and later BIONICLEstory.com, and combined with the themes many books and movies this makes it a unique cultural artefact. Trust me, you’ll see.

Let’s cast our eyes back to 2001, when six canisters washed ashore on a golden beach.

Our story begins on a mysterious tropical island where six tribes of villagers known as the Matoran live in paradise. Created by the Great Spirit Mata Nui, after whom they named the island, they lived in peace until the Great Spirit’s brother, the Makuta, grew jealous. Casting a spell of sleep over Mata Nui, he started turning the very land and beasts of the island against the Matoran. In their hour of need, the Matoran summoned six elemental heroes to the island, in the hopes that they would stop the Makuta and reawaken the Great Spirit. These six heroes, the Toa, were Tahu, Toa of Fire; Gali, Toa of Water; Pohatu, Toa of Stone; Onua, Toa of Earth; Kopaka, Toa of Ice; and Lewa, Toa of Air.

The Toa arrived on the island with no memory of their past, but were soon tasked by the villages’ elders, the Turaga, with finding six masks of power each that would give them the strength to face the Makuta. Battling infected Rahi beasts along the way, the Toa eventually gathered their masks and descended into the heart of the island, seemingly defeating the Makuta and bringing a temporary peace to the island of Mata Nui.

These are the very basics of the story, and though I’d love to talk all day about this first arc of BIONICLE, I’d recommend experiencing the story for yourself. Some dedicated fans have created the Wall of History, a site where you can read the story of BIONICLE from start to finish, which you can visit here.

In total, there were 30 LEGO BIONICLE sets in 2001. Most of these “types” of set came in waves of 6, which would set the pattern for the theme for almost its entire run.

The most iconic sets in the theme’s entire run was this first wave of Toa. They were sold in canisters, rather than boxes, meant to represent the canisters they arrived on the island in, and the lid could have multiple masks attached to them, much like the temple shrines the Toa used for mask storage within the story. Each Toa shared some basic elements, like a body, legs, feet and hands that would be known as the “Mata build”, but each had their own colour scheme and, more importantly, weapons and masks. The bodies also housed Technic gear functions, so that twisting a cog on Lewa’s back would give the impression of him swinging his axe.

The masks in particular were desirable collectibles, with each Toa’s mask also available in the colours of the other five in 8530 Masks. In the story, they gave each the Toa a different power, such as Strength or Water Breathing, and gathering all six would allow them to access a powerful Golden Mask (which would become available in 2002).

In later years, this team would be referred to as the “Toa Mata” to differentiate them from other Toa teams, but this was not for quite some time. Their price of $7 each made them great birthday or Christmas presents, and kept them relatively affordable for kids with pocket money.

They also came with instructions to combine three Toa (either Gali, Lewa and Kopaka or Tahu, Pohatu and Onua) into Toa Kaita, large fusion forms for fighting against more powerful Rahi and the Makuta himself.

The six elders, the Turaga, were also released in 2001. They shared the colour scheme of their respective Toa, though inverted. Where Tahu was primarily red with orange highlights, Turaga Vakama was the inverse, showcasing an orange mask. Each one had a similar build, reliant on Technic pins and liftarms, and each carried a staff that doubled as a weapon and a badge of office (e.g. Turaga Matau staff ended in a buzzsaw for hacking through jungle vines).

At £3 each, the Turaga made good supplements for any BIONICLE fan who wanted to expand their collection with their spare change.

Several species of the island’s Rahi beasts, infected by the will of the evil Makuta, were also released as sets. Each set was of a completely different build, style and price, making them among the more interesting and diverse waves of BIONICLE sets. They were also made predominantly from Technic elements rather than new moulds, though each Rahi did include at least one mask each. The masks were the elements that Makuta was using to control them, the idea being that you could use your Toa’s gear functions to knock off the infected mask and free the beast. 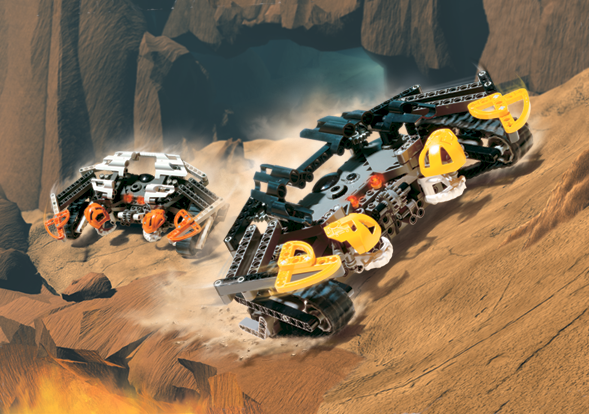 6 Rahi were released in 2001, and for the most part represented BIONICLE versions of real animals. 8537 Nui-Rama was a set of two gigantic mosquitos, 8538’s titular beasts were a Muaka tiger and a Kane-ra bull, and 8539’s remote-controlled Manas were monstrous crabs. Perhaps the cutest was the slightly less widely-available 1441 Fikou, a tiny little orange spider that seems more like a cute pet than any kind of threat, though its presence is just another example of BIONICLE’s great world-building.

Excluding the tiny spider polybag, these sets ranged from $15 for 8537 to $90 for 8539, and everywhere in-between. There was something for every price range, though they would be harder for a child to collect or a parent to justify, which was an odd decision for the first year’s only “enemy” sets.

Interestingly, the US was also blessed with a wave of six polybags featuring Matoran villagers, but only as Happy Meal toys. These six sets were never given a wider release, much to fans’ disappointment (especially if you lived in the UK and Europe like me, booo) and so are very valuable on the secondary market today.

Each one is even shorter than a Turaga, and with the exception of 1390 Maku features a recolour of a mask worn by their village’s respective Toa. These Matoran are also characters in the Mata Nui Online Game, a free RPG on the BIONICLE website, and arguably acted as the point-of-view protagonists for early BIONICLE.

Their arms are each designed differently, allowing them to throw a small black “bamboo” disk with one arm.

I’ve already mentioned 8530 Masks (or 8525, if you lived in the US) which featured random combinations of 6 recoloured masks: 3 Toa masks, and 3 Turaga masks.

There was also 8546 Power Pack, a CD featuring three pieces of BIONICLE-themed music that you can now hear over on the Biomedia Project’s website. It also came with another village, Hafu, and a chrome variant of Tahu’s Mask of Shielding, which is now a very desirable collector’s item.

As previously mentioned BIONICLE was a multimedia endeavour, and so books, comics and games were all released right from the get-go to carry fans through the BIONICLE story.

The first book was BIONICLE Chronicles 1: Tale of the Toa which, alongside the first series of 3 comics published by DC, told the Toa’s perspective on the events of the first year. These are both available on the Wall of History and Biomedia Project, and got BIONICLE off to a strong start in terms of a visual style and well-defined characters. This story-driven focus still had opposition within LEGO but proved popular, and would continue throughout its whole first run.

Games were also an essential part of BIONICLE from the start, and in 2001 were largely told from the perspective of a Matoran villager called Takua. In the Game Boy Advance game BIONICLE: Quest for the Toa, set before the rest of the storyline, you help Takua find the Toa Stones that bring the Toa to the island, while the free online RPG Mata Nui Online Game (arguably the highlight of BIONICLE’s story in 2001 for its rich world building and design) followed him immediately afterward, wandering the island to help other Matoran, and even the Toa themselves. MNOG culminated in a cutscene showing the Toa’s final battle with Makuta, followed by a tease of 2002’s antagonists.

A third game was planned, for console, but BIONICLE: The Legend of Mata Nui would not see the light of day until some dedicated fans reconstructed it nearly two decades later.

It’s worth noting here that BIONICLE drew more than a little inspiration from Maori culture for the early storyline. Names, words and concepts from the Maori language were used for villagers, Rahi, Toa, masks and all sorts, and ultimately LEGO agreed to change most of these. The “Tohunga” villagers were renamed to “Matoran”, and many characters had their names either changed entirely or the spellings altered.

As a fun note of trivia, as DC possessed the comic rights to BIONICLE in 2001, four of the Toa are featured as a cameo when a character views the worlds of the multiverse in Spectre Vol 4 issue 10. While many fans argue its canonicity, it’s a fun little aside that just shows how widespread BIONICLE’s name had grown during even just its first year.

While there’s still a lot I could talk about, even just in BIONICLE’s first year, it’s probably best if we call it a day here. If you’re interested in exploring BIONICLE further, join me for an overview of 2002 coming soon! You can also read, watch and play the BIONICLE story for yourself over at Wall of History and Biomedia Project, or immerse yourself in the fan community that’s still active to this day over at BZPower.com, TTV, and the r/bioniclelego subreddit.

I hope you enjoyed this first retrospective of BIONICLE, and I look forward to seeing you again soon as we tunnel beneath the ground to come face-to-face with the Bohrok swarms…