Wake one BIONICLE fan, you wake them all…

Welcome back to our deep dive into the world of BIONICLE, one of LEGO’s longest-running and most notable story-driven themes. Despite the fact it still has a very active fanbase it does feel a lot like “you had to be there”, a cultural zeitgeist that’s perhaps less impactful for an audience in the 2020s.

Some years are more alien in concept than others, and 2002 is definitely that. The pseudo-Maori trappings of 2001 started to be replaced by a new, unique mythology in 2002 as both the sets and story of LEGO BIONICLE got into their stride.

Let’s take a look at the saga of the Bohrok Swarms.

Mere minutes after defeating the Makuta and believing they had freed the island of Mata Nui, the six Toa heroes found on their return to the surface that a new threat was already assailing the Matoran villages. Hordes of ovoid, insectoid creatures that the Turaga elders identified as Bohrok had come to “clean” the island…and by clean, they meant removing all signs of Matoran civilisation.

Where the Rahi attacks had seemed random and animalistic, the Bohrok were organised and methodical legions, and the Toa soon learned that every Bohrok was piloted by a Krana. These Krana were like the Toa’s masks but fully organic and part of a hive mind, coordinating the swarms’ attacks and taking their orders from a central source, once again below the island.

In order to gain access to this mysterious underworld, the Toa needed to collect one of each type of Krana from each type of Bohrok. Though successful, many of the Matoran villages were wrecked in the process, and their plight rapidly became more desperate. The Krana themselves could also attach themselves to the faces of Matoran, Toa and Turaga, and for a brief time Lewa, Toa of Air, was himself controlled by the swarms. Once he was freed, he was able to share some insight on the Bohrok nest and the “queens” controlling them.

Their Krana collected, the Toa made their way into a strange landscape of illusory walls, lava traps and strange machinery. What they find are not more Bohrok, but the two huge, dragon-like Bahrag twins, Cahdok and Gahdok, who immediately begin defending themselves. The battle is long, as the Bahrag are stronger when united, but the Toa eventually combine their elemental powers and create a protodermis cage to trap the queens!

Their victory is short-lived however, as an earthquake begins and the Toa find themselves plunging into a pool of energised protodermis. When the Toa emerge, they are not only shocked to have survived, but find themselves transformed, wearing strange new armour and masks…

2002 was the year when I started collecting LEGO BIONICLE sets, so as strange as the story is, this party of the franchise holds a special place in my heart. The packaging was unlike anything I’d seen before, and the design of the Bohrok nest was like an alien landscape. I was completely swept up from the day I got my first BIONICLE, so let’s talk a little about them.

Unlike the Rahi in 2001, the six Bohrok sets had the same uniformity as the Toa: six sets, each one of six colours, and one of six elemental powers (though the green one was Acid and not Air). Coming in at 41 pieces and $8.00/£4.99 each, these insectoid creatures could fold up into a sphere, either for rolling across the plains of Mata Nui or for sitting dormant inside their nests. The canisters they came in were actually designed to function like the nests: you could hang the Bohrok inside them, upside down, visible through the clear plastic of the canister once you removed the packaging sleeve.

Their main feature, though, was in the head. A gear mechanism on the back of the body could be pressed down to make the head snap forwards, to bash the mask of a Toa or Matoran. I think I speak for everyone who had a Bohrok set when I say this was probably the most memorable gear function in the theme, and I spent hours making my Bohrok hit things with their face.

You could also flip their transparent visors up to release their Krana and take control of the now-unmasked opponent.

If a Bohrok had its Krana knocked out on the battlefield, a Bohrok Va would be dispatched to bring them a new one. These tiny LEGO BIONICLE sets were 2002’s answer to the Turaga sets, and featured very similar builds (though using Matoran feet and with Bohrok shields for faces). They also featured new colour variants of the Krana, which were meant to represent Krana in their “deactivated” or “dormant” state.

These little guys were cute, and at $3.00/£1.99 it was hard not to pick them up to go alongside your growing Bohrok swarm.

Speaking of reused builds, we come to the Toa themselves, in their upgraded, Toa Nuva forms. Their bodies are the same basic builds as their 2001 counterparts, however most of them sport new, chunkier limbs, silver armour, and updated Kanohi Nuva masks. In-story, a Kanohi Nuva allows the user to share the mask’s power with those around them, but the physical designs are very hit and miss. Tahu and Gali’s new faces are fine, but all of them suffer from being made overcomplicated and less elegant than their predecessors. 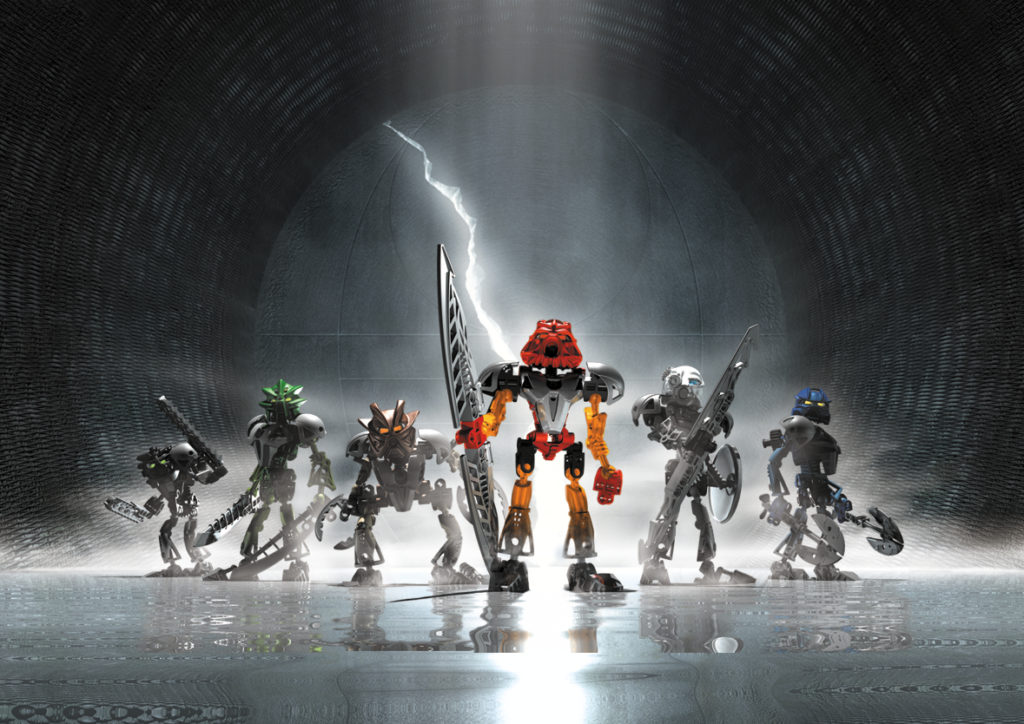 The silver armour was a nice touch, and a great way of showing these Toa’s new elevated status. They also came with new silver weapons, which the Toa mostly dual-wielded (Kopaka being the odd one out, with a sword and shield as before).

Despite the overengineering of the new masks, the Toa Nuva was a solid wave of sets, and would actually remain the Toa’s canon forms for several years. They retailed at $8.00/£4.99, just like the Bohrok, and were between 36 and 42 parts per set. Not bad at all.

2002 had several larger LEGO BIONICLE builds in what would come to be referred as a “Titan” wave (essentially larger, Technic-focused characters and vehicles). This tradition started off strong with 8558 Cahdok and Gahdok who looked somewhere between giant Bohrok and a pair of dragons. Like the Bohrok, you could press a lever and make their heads shoot forward and jaws snap. They were imposing, and definitely a good fit for the year’s primary antagonists. 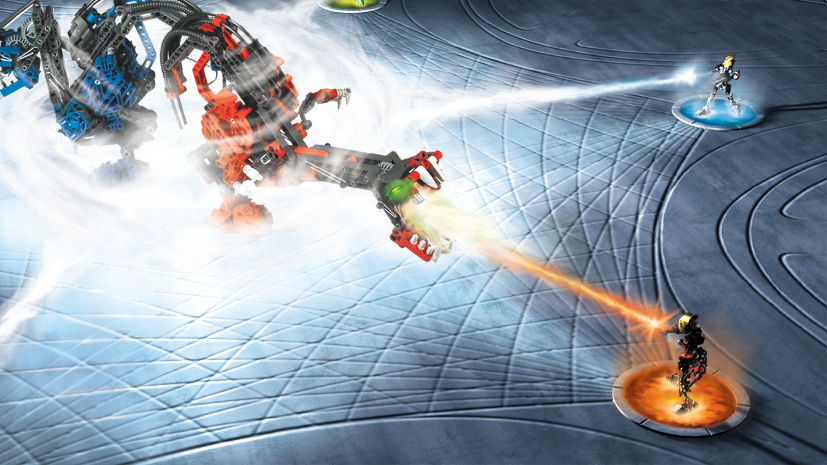 The hulking 8557 Exo-Toa was also released, a suit of mecha armour large enough for one of the 2001 Toa (or a Toa Nuva with their silver armour removed) to pilot. These things were great, with one arm ending in hooked claws and the other in a cannon that actually fired. Since their release, a lot of fans have gone on to buy six of them, one for each Toa, though to do so in 2021 would be a costly endeavour – a New copy will set you back £171! 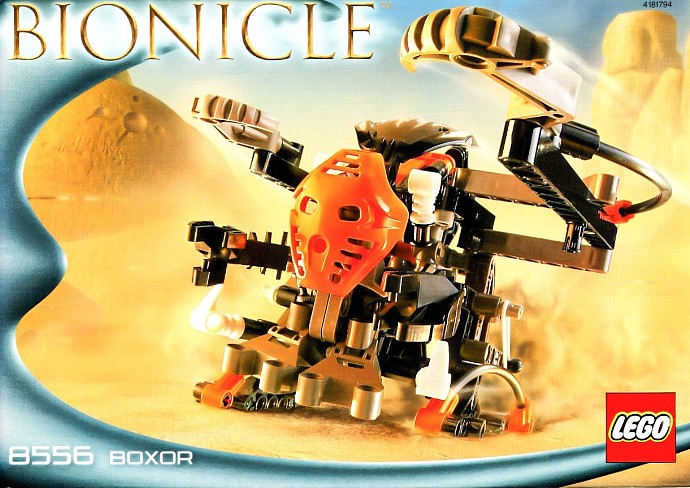 My personal favourite LEGO BIONICLE set from 2002 was neither Bohrok nor Toa, but 8556 Boxor Vehicle. In-story, a Matoran inventor named Nuparu takes pieces from fallen Bohrok and creates a tank for him and his fellow villagers to use against the invaders. Dubbed a “Boxor”, this rolling machine has two powerful punching arms, perfect for bashing Bohrok faces in! It was big enough for one villager, and its pilot Nuparu was technically the only Matoran of this design to be released outside of North America thanks to this set. 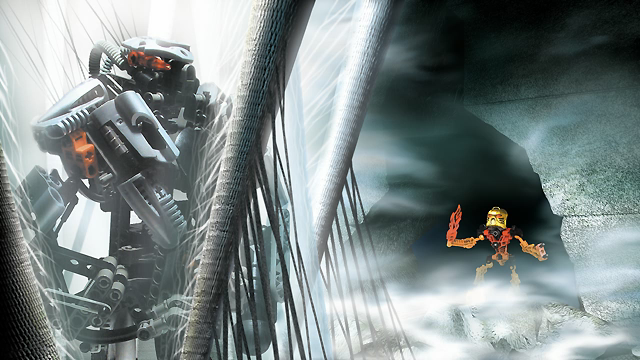 As in 2001, there was a blind bag of masks to collect all of the Krana and golden versions of the Toa’s masks. More interesting perhaps was the oddity 10023 Bionicle Master Builder Set, a box of Technic parts with instructions for 15 more of the island’s Rahi beasts. Unlike the previous year’s, these were not all aggressive creatures, just a representation of the fauna of Mata Nui, and in my opinion an excellent piece of world building. However, you could only make one or two Rahi at a time, so it would take multiple copies of the set to build them all at once. 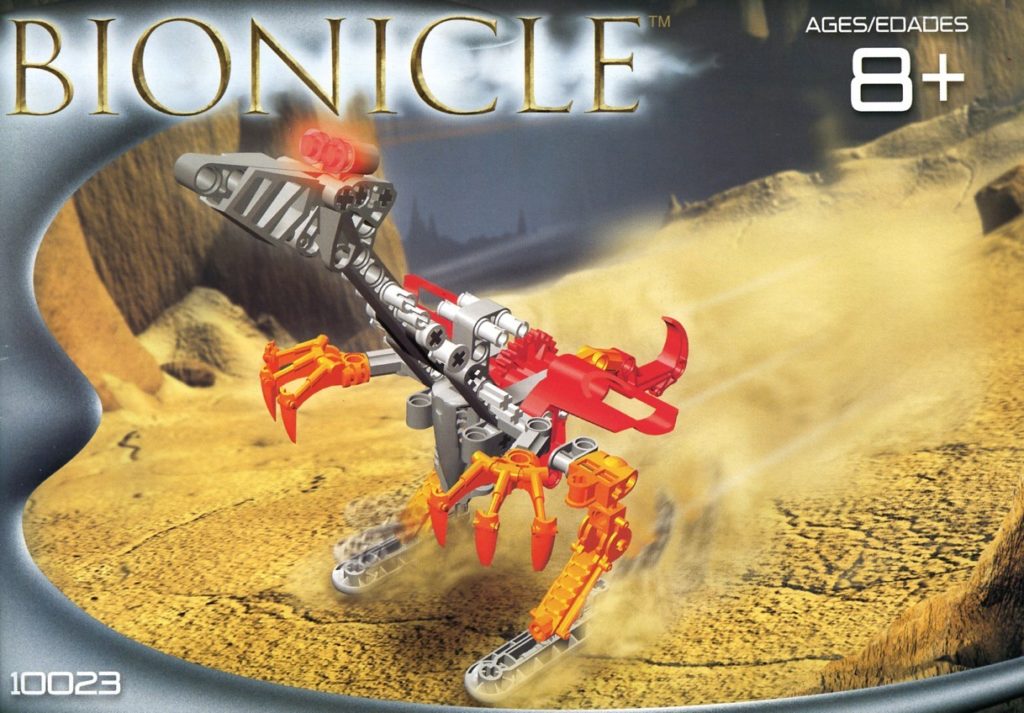 As in its premiere year, multimedia storytelling was still one of LEGO BIONICLE’s greatest strengths in 2002, weaving its narrative through comics, a book, web content and more. The book BIONICLE Chronicles 2: Beware the Bohrok contained most of the core narrative, with comic issues 4 through 9 adding more texture to the story. A series of Matoran-focused web animations in the style of the Mata Nui Online Game showed more of the conflict between the Matoran and the Bohrok as the former attempted to defend their homes.

Though it wasn’t released in 2002, this year did see the announcement of a big step for the LEGO BIONICLE franchise: its first movie would be coming in autumn 2003…

Back to the nest

On that note, I think it’s best that we stop here and look ahead to one of BIONICLE’s most pivotal years. Where 2002 had begun to develop a new mythology, both in the story and with its sets, 2003 would take that progression to a whole new level.

If you’re interested in exploring BIONICLE further, join me for an overview of 2003 coming soon! You can also read, watch and play the BIONICLE story for yourself over at Wall of History and Biomedia Project, or immerse yourself in the fan community that’s still active to this day over at BZPower.com, TTV, and the r/bioniclelego subreddit.

I hope you enjoyed this second retrospective of BIONICLE, and I look forward to seeing you again soon as the hunt for the Seventh Toa begins… 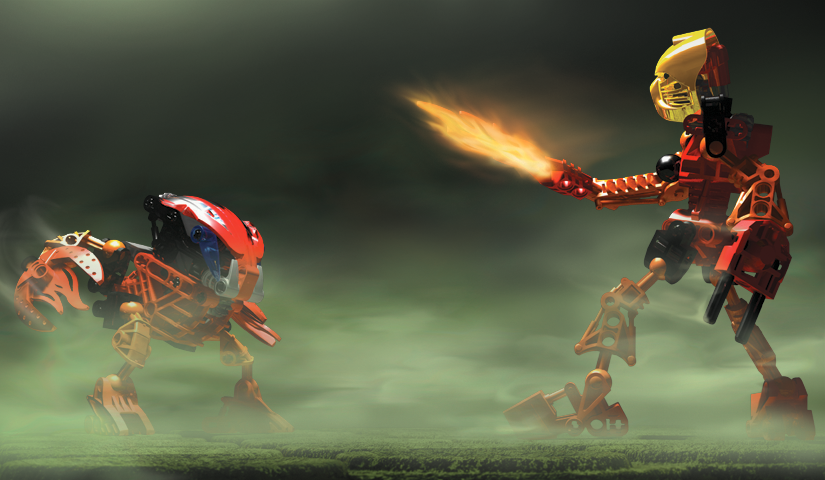